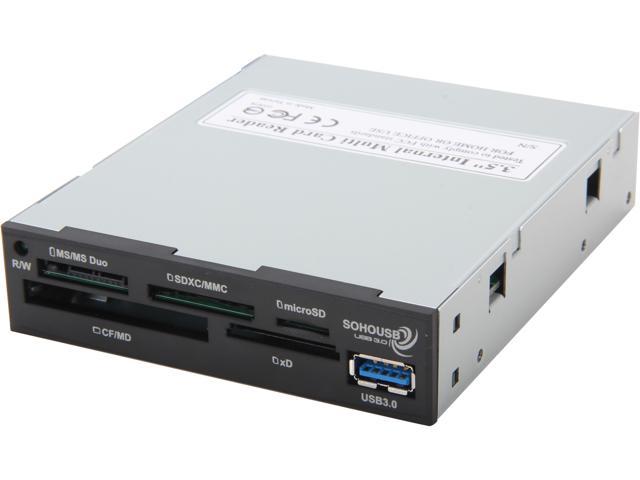 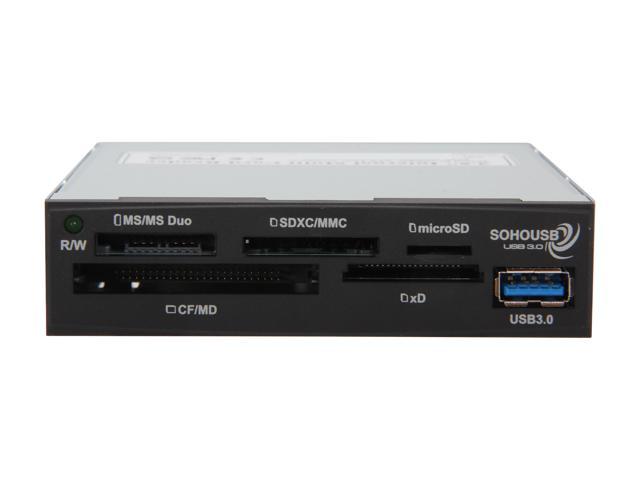 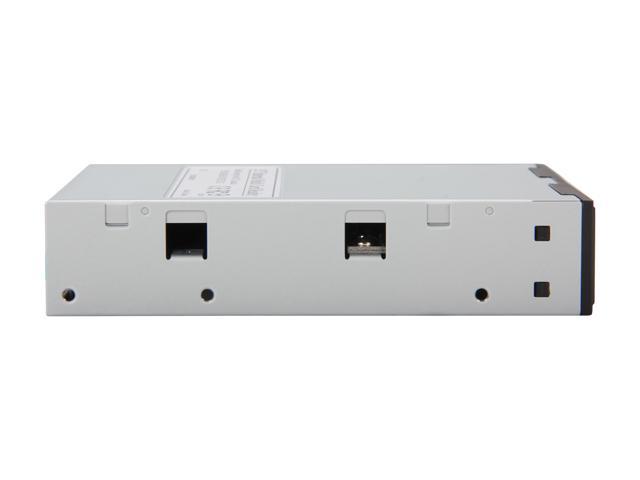 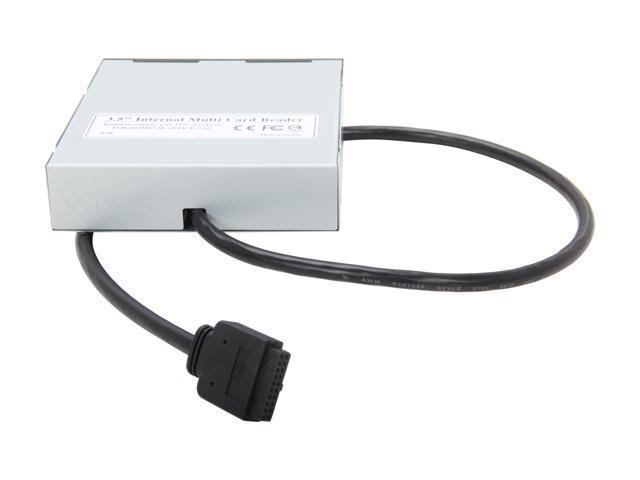 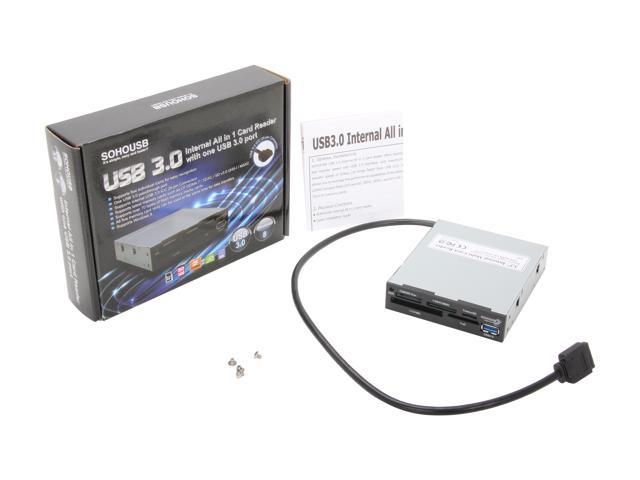 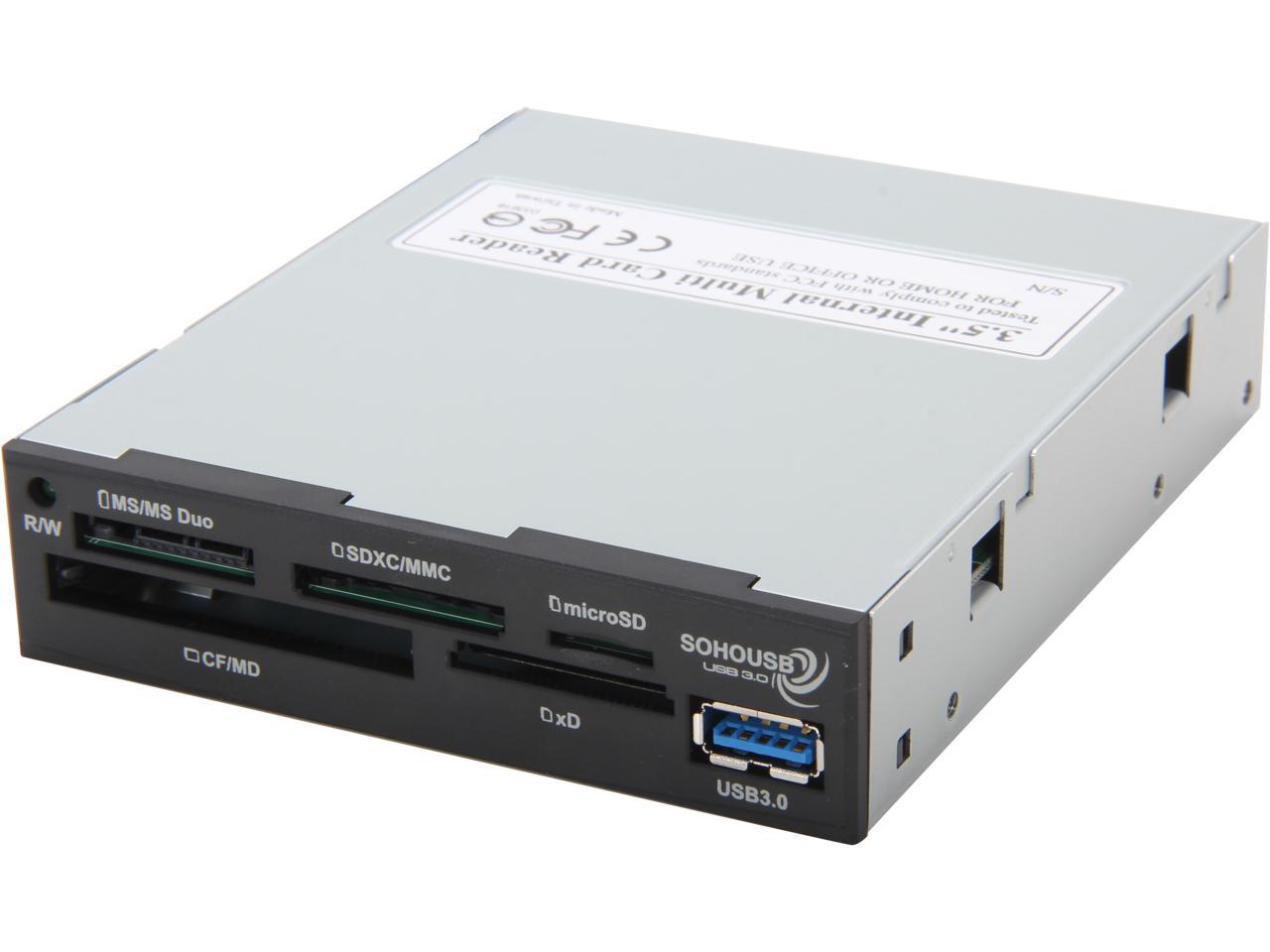 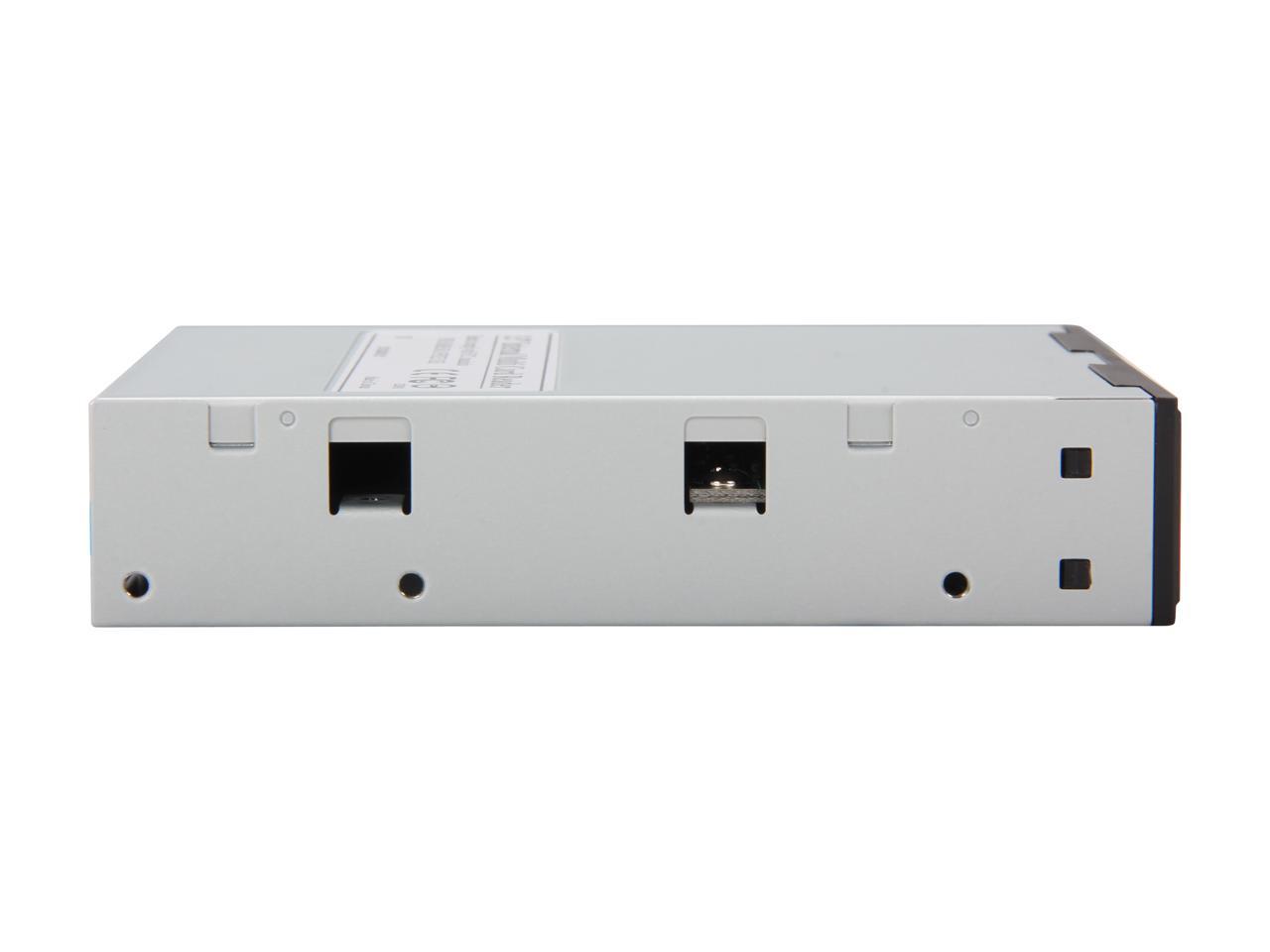 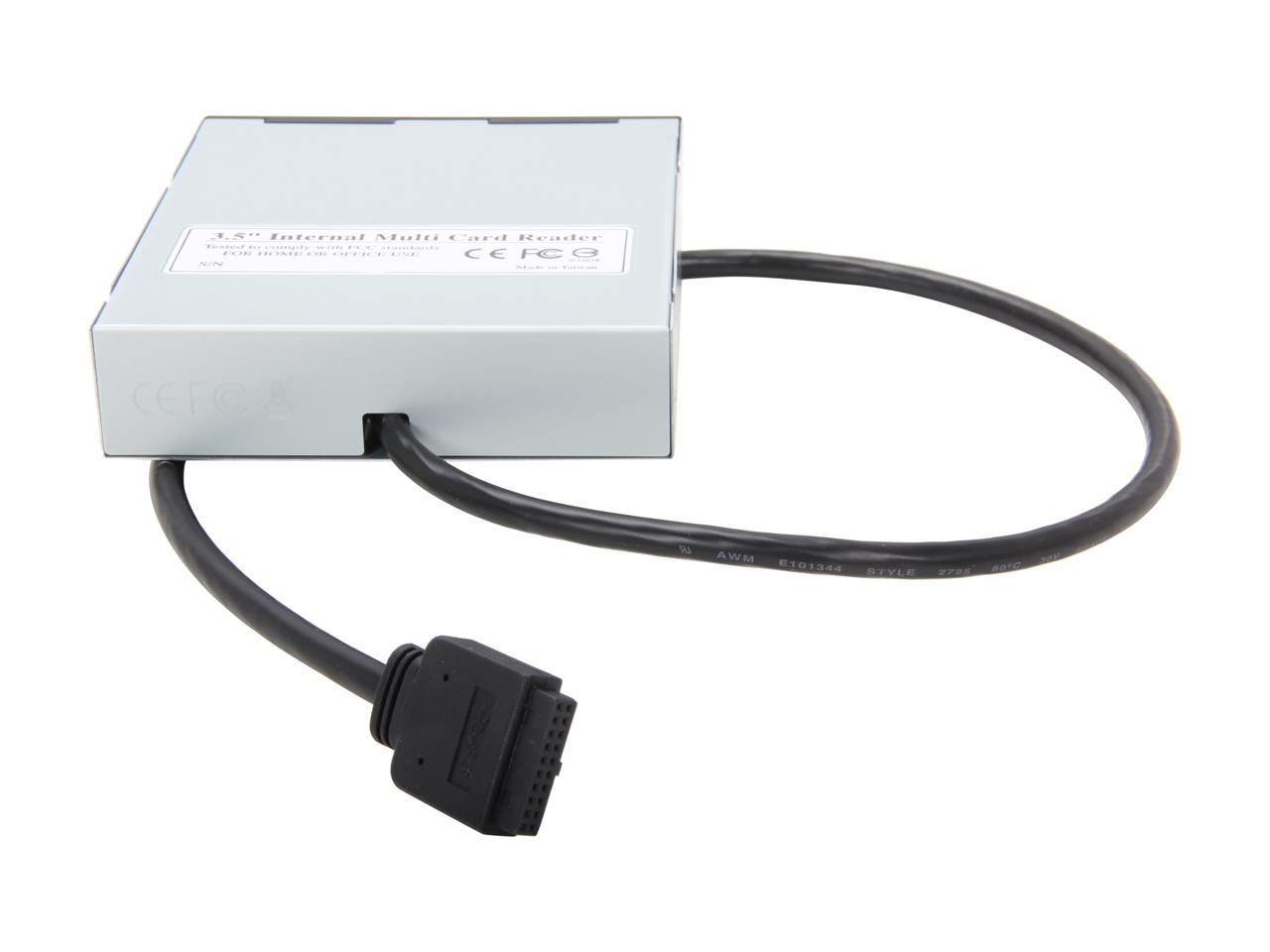 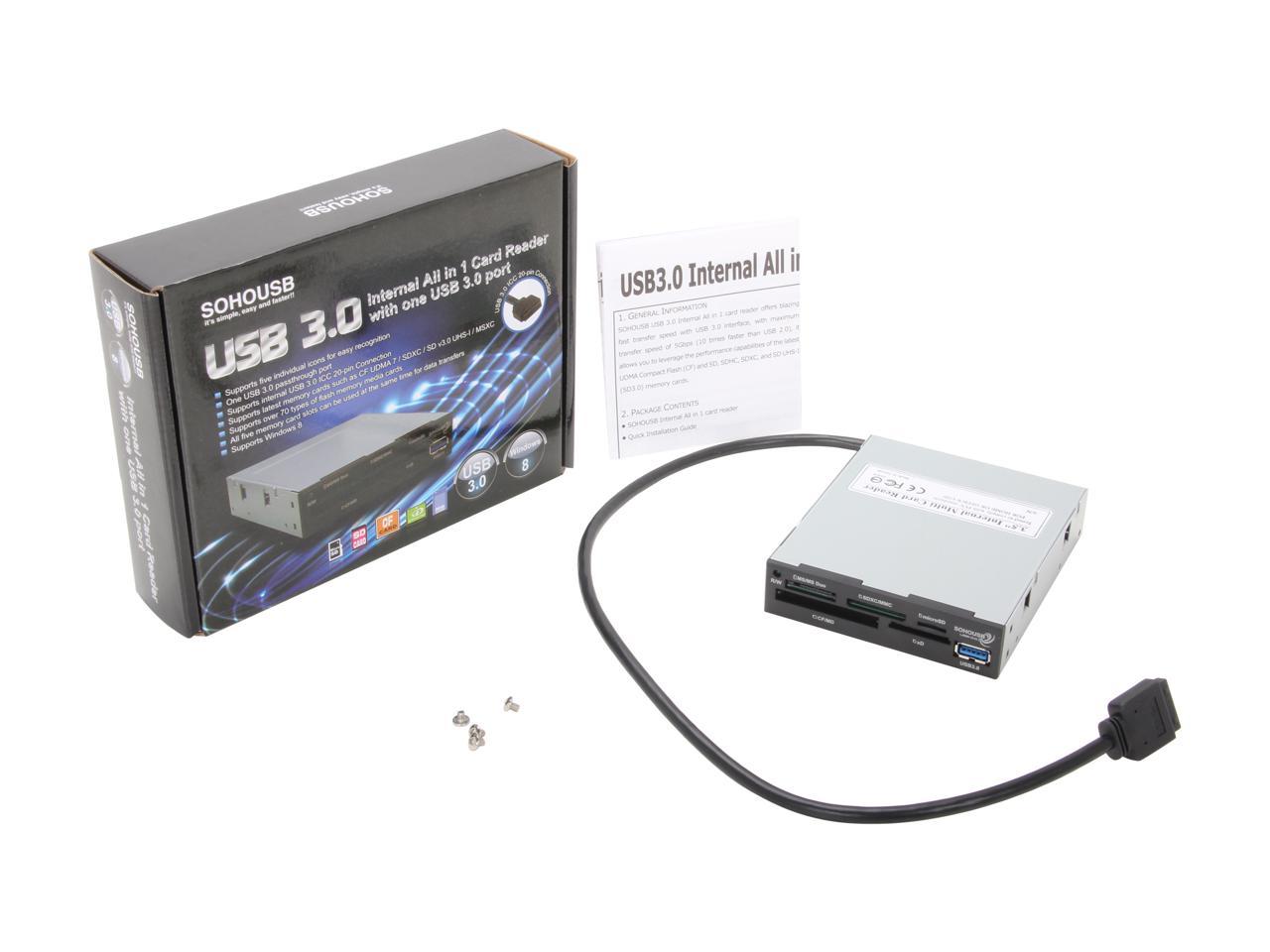 Pros: Internal card reader that has an actual USB 3.0 internal connector. Really does work at USB 3.0 speeds. Each slot presents as a separate USB endpoint, so if you can get to work, you can use all the slots at the same time.

Cons: Presents as a USB mass storage device with no media when the slots are empty (this could also be considered a pro, see other thoughts). Causes Xen to hang during boot on a UEFI system. Causes Linux boot time to increase by a couple of seconds (see other thoughts).

Overall Review: I know much more than the average individual about the actual operation of the USB protocol, and I can say categorically that this has to be the most well designed USB card reader that I have ever seen, this is a large part of the reason that I gave it three eggs instead of just one Overall, I would say that this is well worth the price, provided you can get one that works. I appear to just have had bad luck and got a unit with defective interface logic between the USB controller and the actual card readers, as it doesn't recognize any of the (known good) media cards I tried with it. The fact that It presents as a USB mass storage device with no media when empty is standard practice with this type of device, and is also the reason that it causes Linux to boot slower (I consider this to be an issue with Linux, not the devices). As for the boot issues with Xen, I have no idea what causes this (I think it's something with Xen itself, not this specific device, cause i have had simmilar issues with other USB 3.0 devices).

Pros: The ease of installation on this product is awesome! One cable connects to a 19 pin USB3 header. Yes that's all and screw it into a 3.5" port. If you don't have a 19 pin USB3 header available for use, Do not fret. Buy this: HooToo® HT-PC002 SuperSpeed USB 3.0 ... Item #: 9SIA1HD0PB5476 These 2 products work awesome together!! Also be sure to have the latest bios and motherboard updates for USB3 drivers. This is imperative for USB3 to work properly on your machine!

Pros: It worked great for about 6 months. It was easy to install, Windows 7 x64 found drivers, no problem. 1 cable.

Cons: The CF reader slot no longer reads. Also, when transferring large files to USB, Windows will hang (all programs) until copy is complete. This does not occur when copying via USB port on back of MB.

Overall Review: It's great when it works, but falls apart quickly. I'd recommend something else, or use an external card reader...

Pros: Multi-format reader in the face of my desktop, so there's no need for obtrusive or unattractive cables sticking out the front. Connection (internal usb) was a breeze. USB 3.0. :-)

Cons: Not every case/motherboard has the requisite internal connectors available, but that's a symptom of a cheap m/b, not the reader.

Overall Review: I've had this thing up and running for 3+ months. I think I used it once just to make sure it works. It's a wonderful security blanket though. I have a slew of SD, SDHC, MicroSD, Duo, etc. electronic devices. So knowing I have the capability of a removable media interface for all of them let's me sleep better at night. For that, the $30 is worth it.

Cons: None really about the reader. Z77 boards have flaky support with onboard USB 3.0. What's funny is the cheap HooToo USB 3.0 adapter I have in a PCIex1 slot has NEVER flaked out on it's USB 3.0 support. Speeds are pretty good, although I don't think the front USB port for Flash drives is totally at 3.0 speeds.

Overall Review: I may have to rearrange things and unplug this thing from the motherboard 3.0 adapter and plug into the HooToo adapter. I bet it shows every time!

Pros: Cheap. Lots of inputs including USB 3.0 which is still working for now

Cons: Bought this because I need to transfer video files from an SD card onto my computer to be processed. Didn't take more than a month before the SD slot began to just stop in the middle of a transfer. It doesn't pick up where it stopped, it completely reset. It has progressed to the point that I cannot even get it to recognize the card any more. I now have to transfer to my laptop, then to a thumb drive, then to the desktop.

Cons: Defective. Reader worked for USB "thumb" drives. Did not work for SD (which is the primary reason I bought it for). I contacted Koutech's support and that made things worse. First off, their response time is slow (sometimes days in between responses). Secondly, they expected me to open the unit up in order to jiggle the wire. Apparently they know that the manufacturing process sometimes doesn't plug the wire in entirely. Oh, and by the way, if the unit is scratched in the process of opening it, then the warranty is void. Absolutely ridiculous. When I first contacted Koutech's support, I explained that I'm using Linux (my first thought was that the problem was related to my Linux configuration). Their response was full of suggestions as if I were using Windows, and did not answer some of my questions. I repeatedly asked which versions of the Linux kernel are supported & known to work. It took many back-and-forths to get an answer.

Overall Review: I was hopeful that this unit would work because I've needed a SD reader for my PC for a while. Now I need to start the search over.

Pros: None, as i didn't actually get a chance to use it.

Cons: DOA. Plugged it in, nothing worked. Just dead. Not happy, but I was able to RMA. Very annoying.

Overall Review: Spend more money on a quality one.