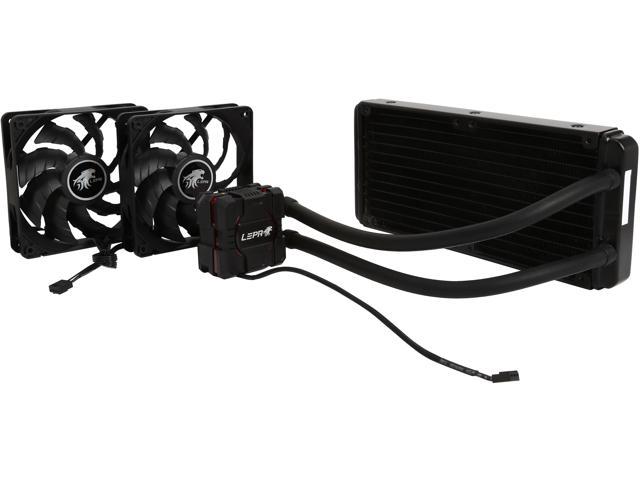 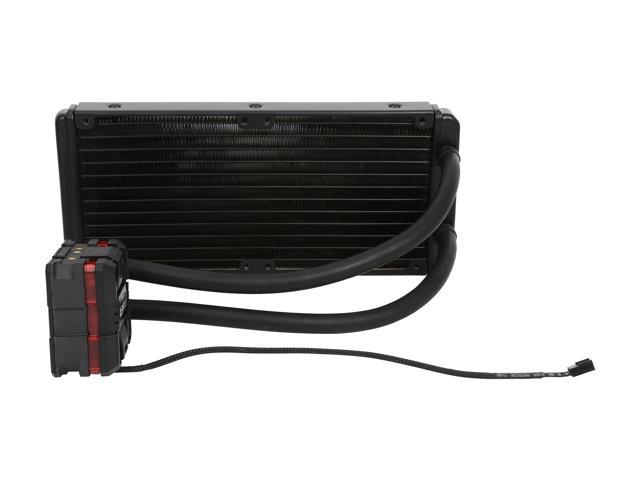 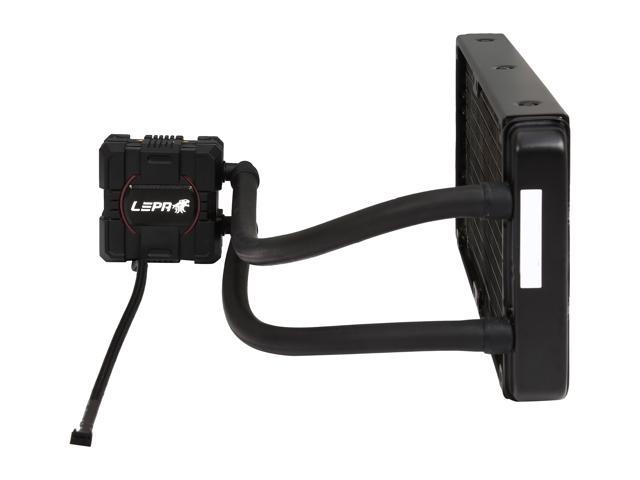 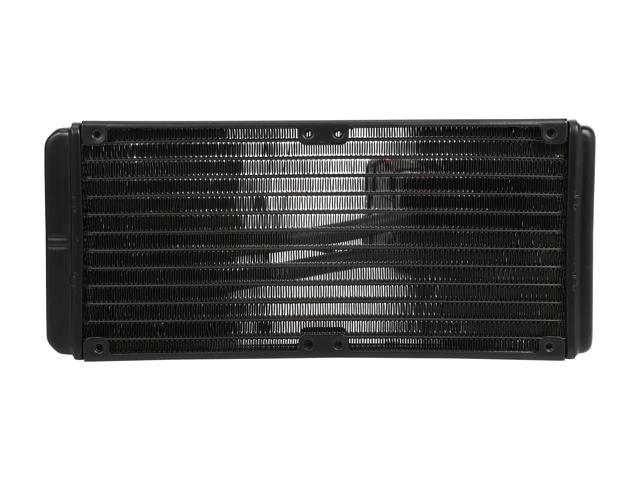 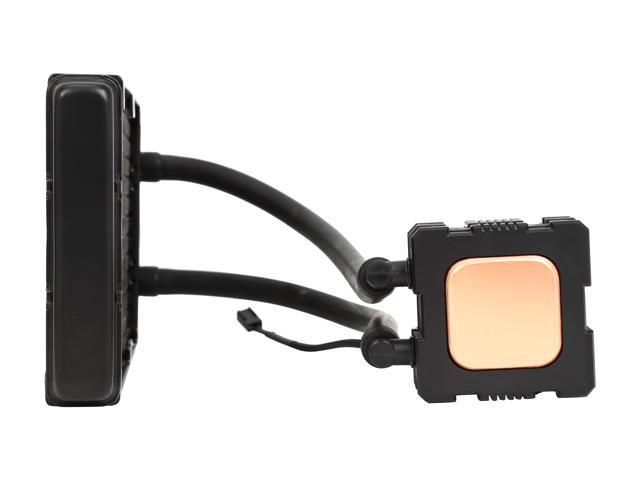 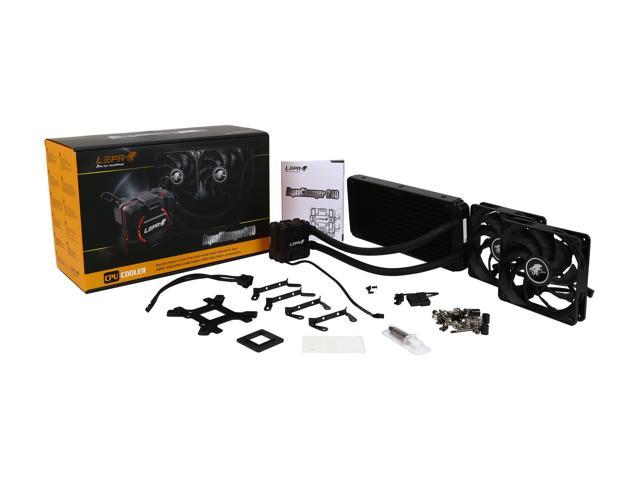 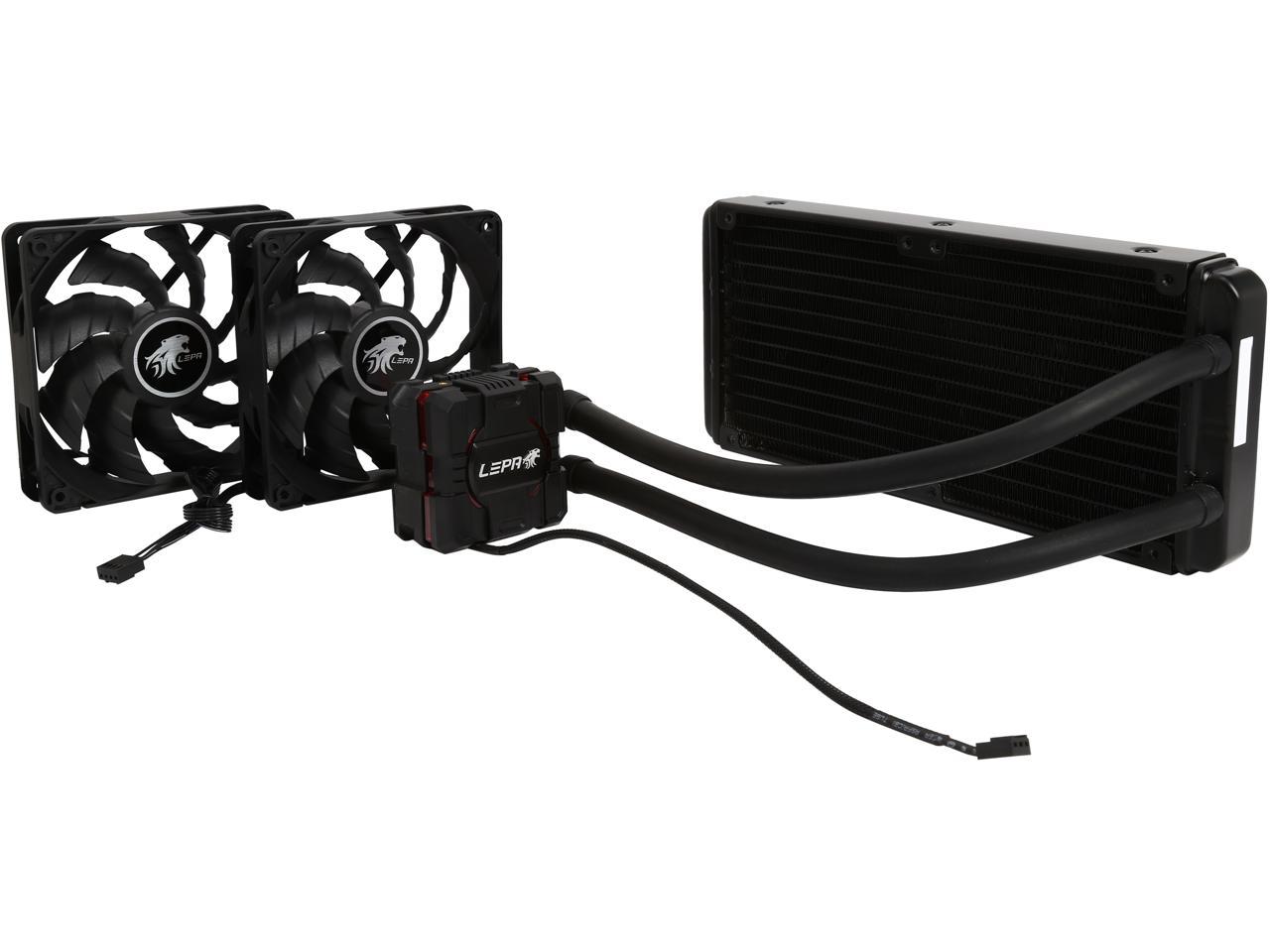 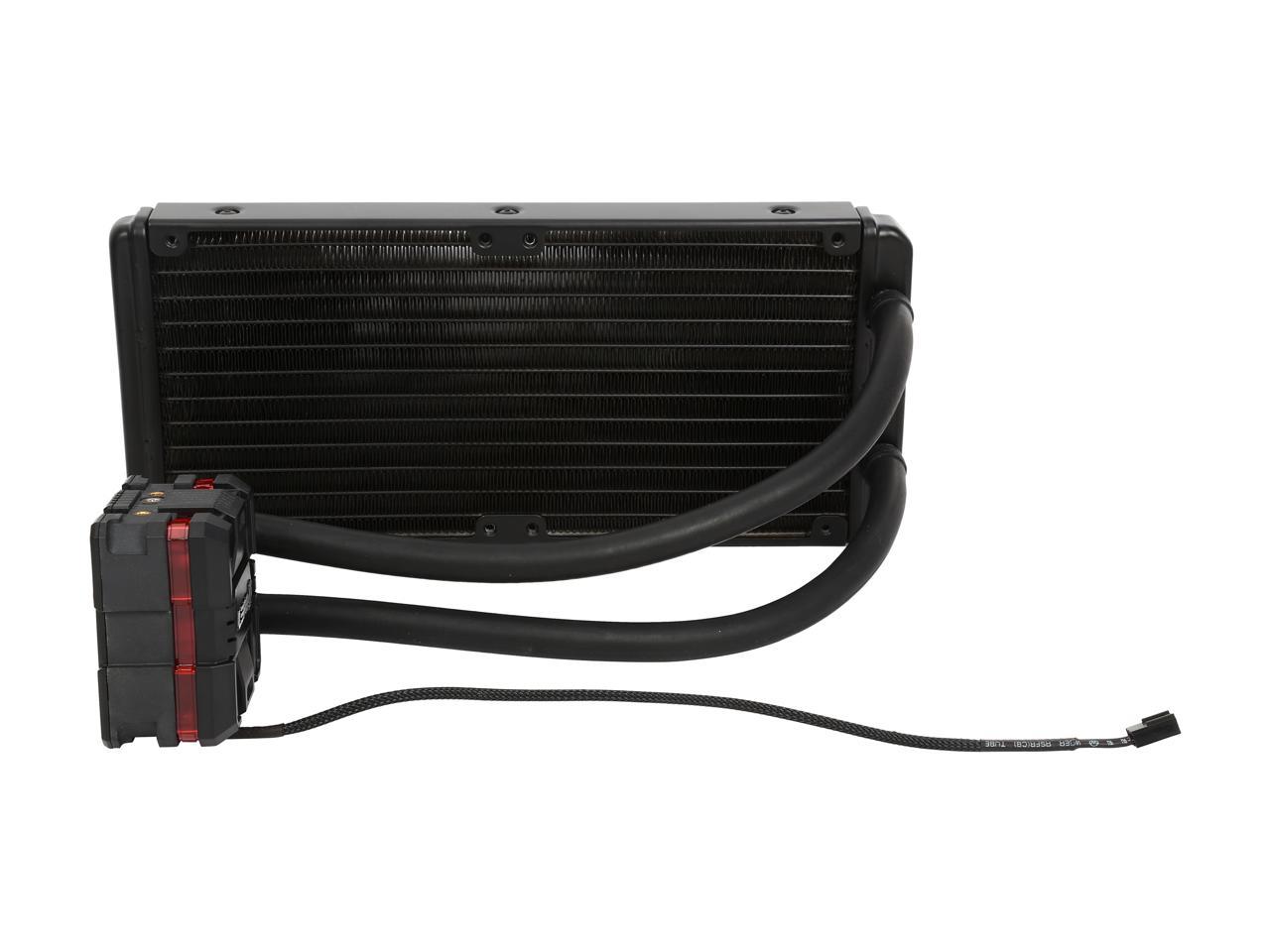 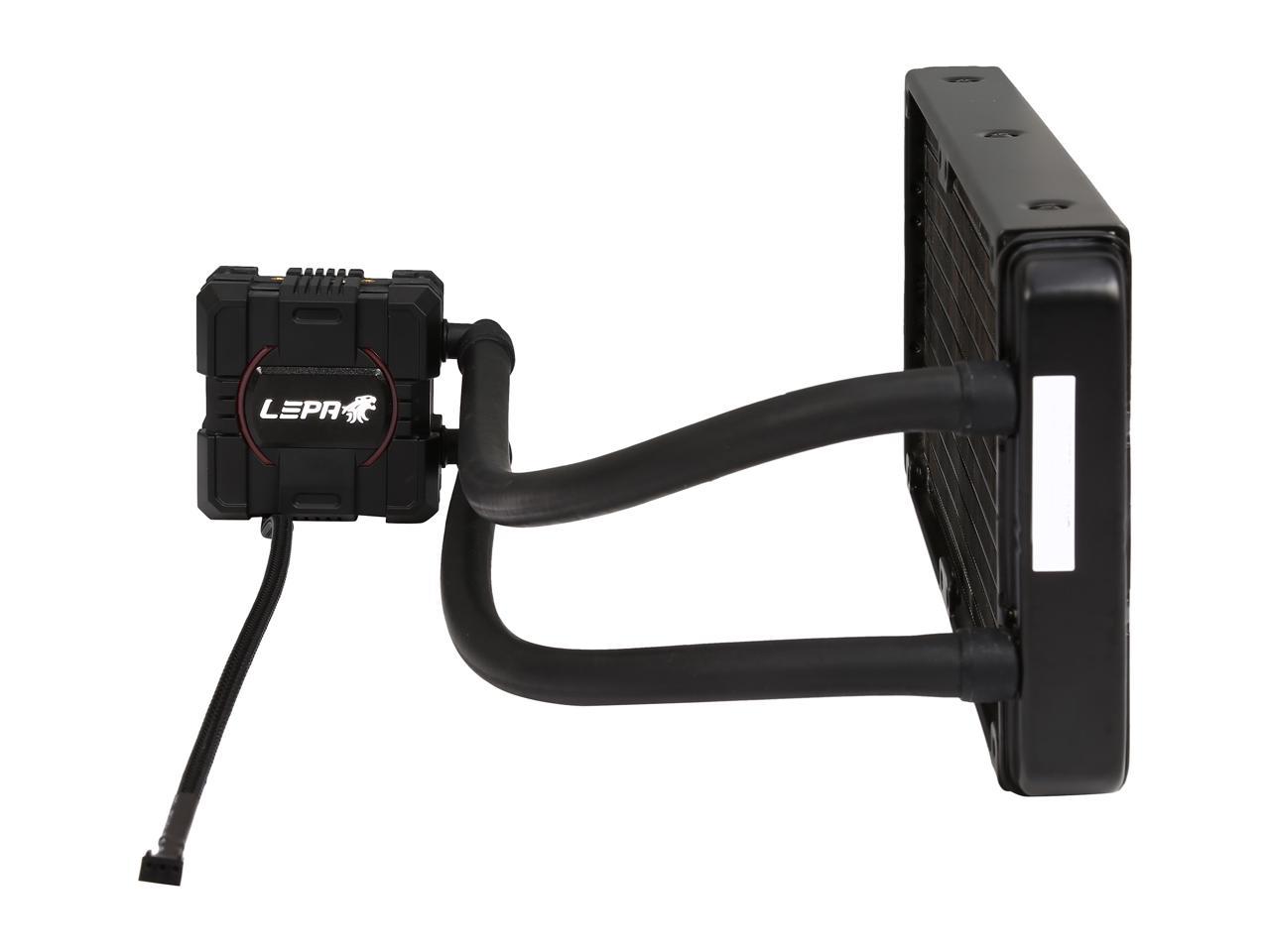 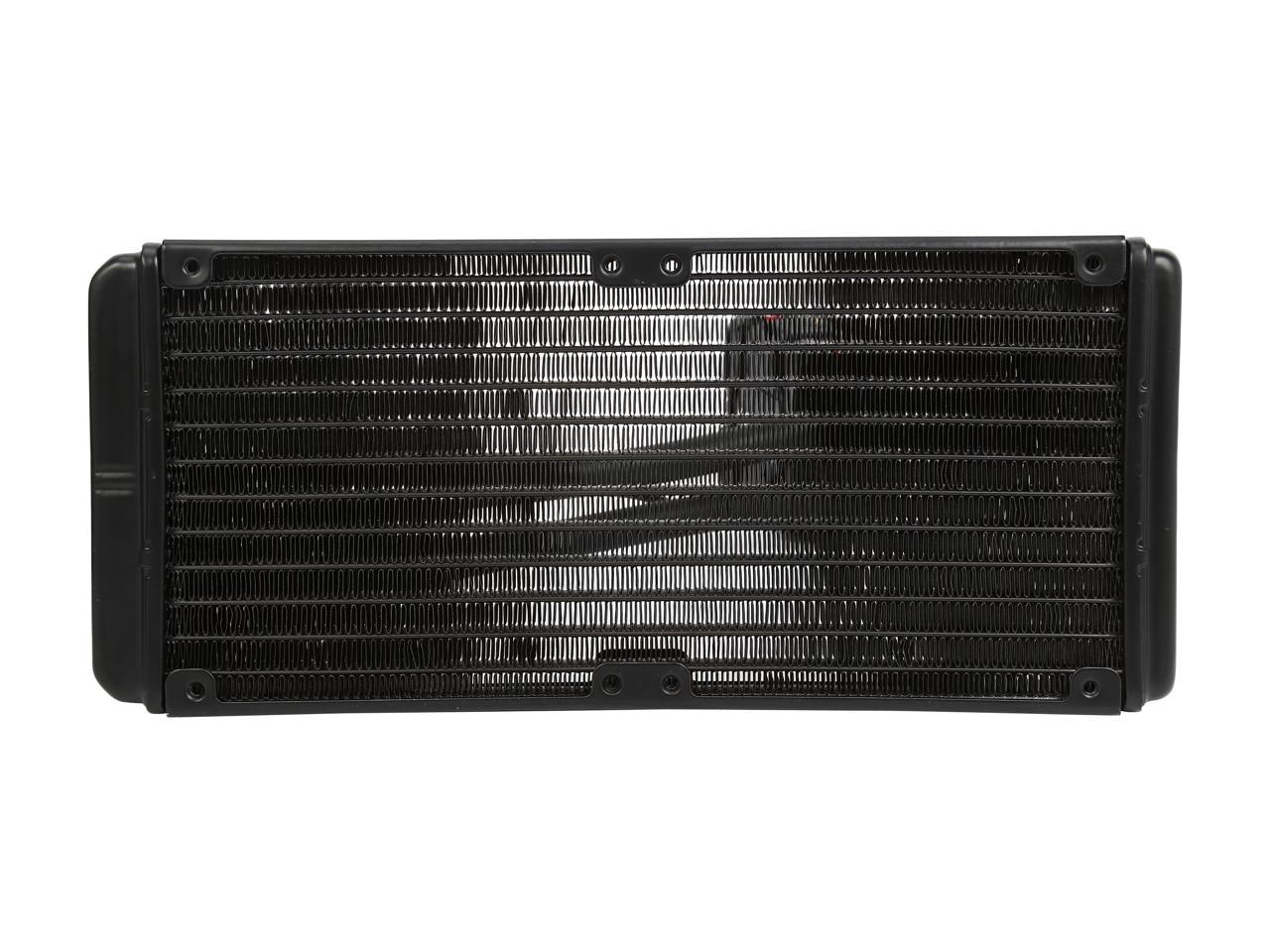 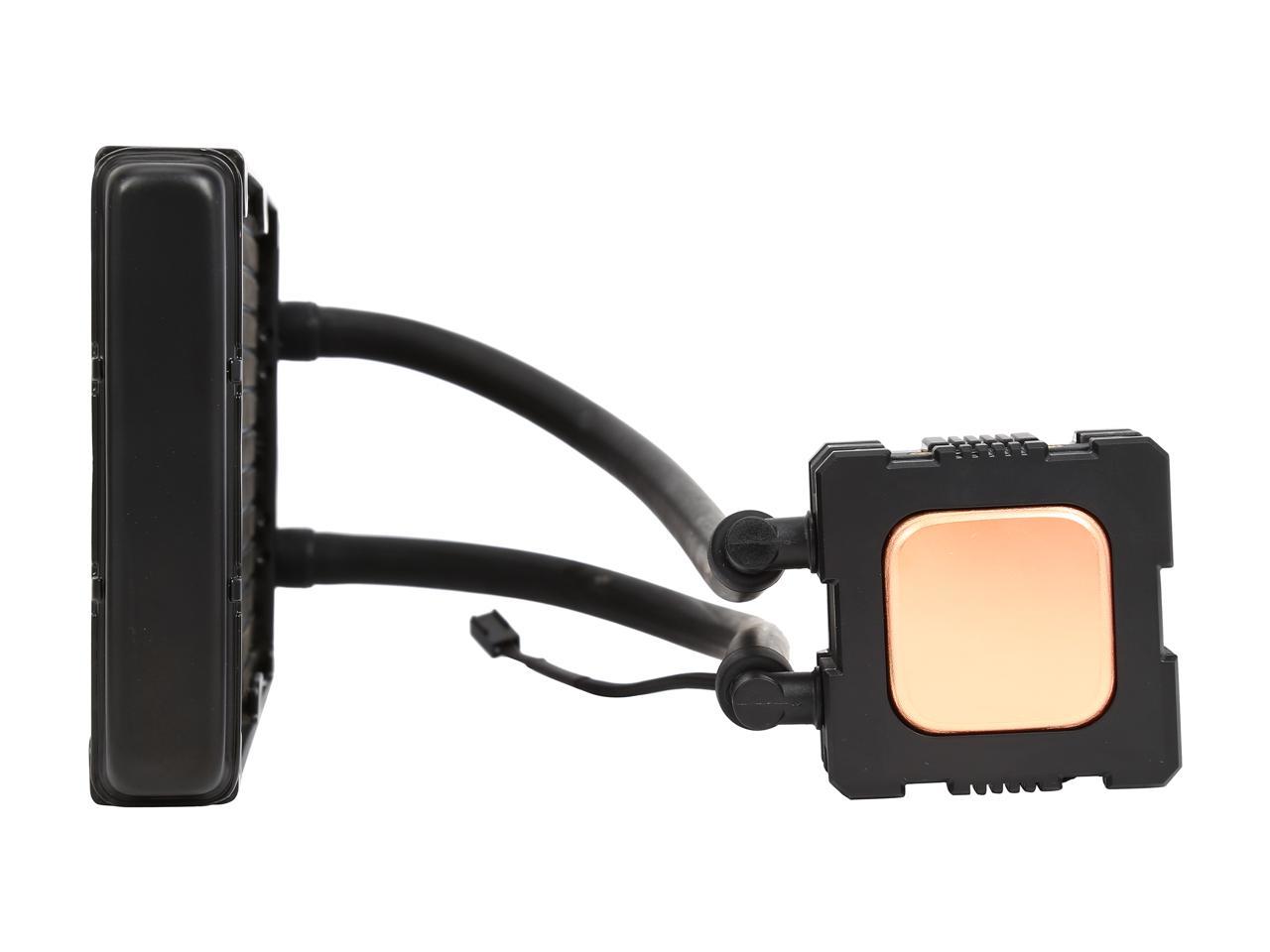 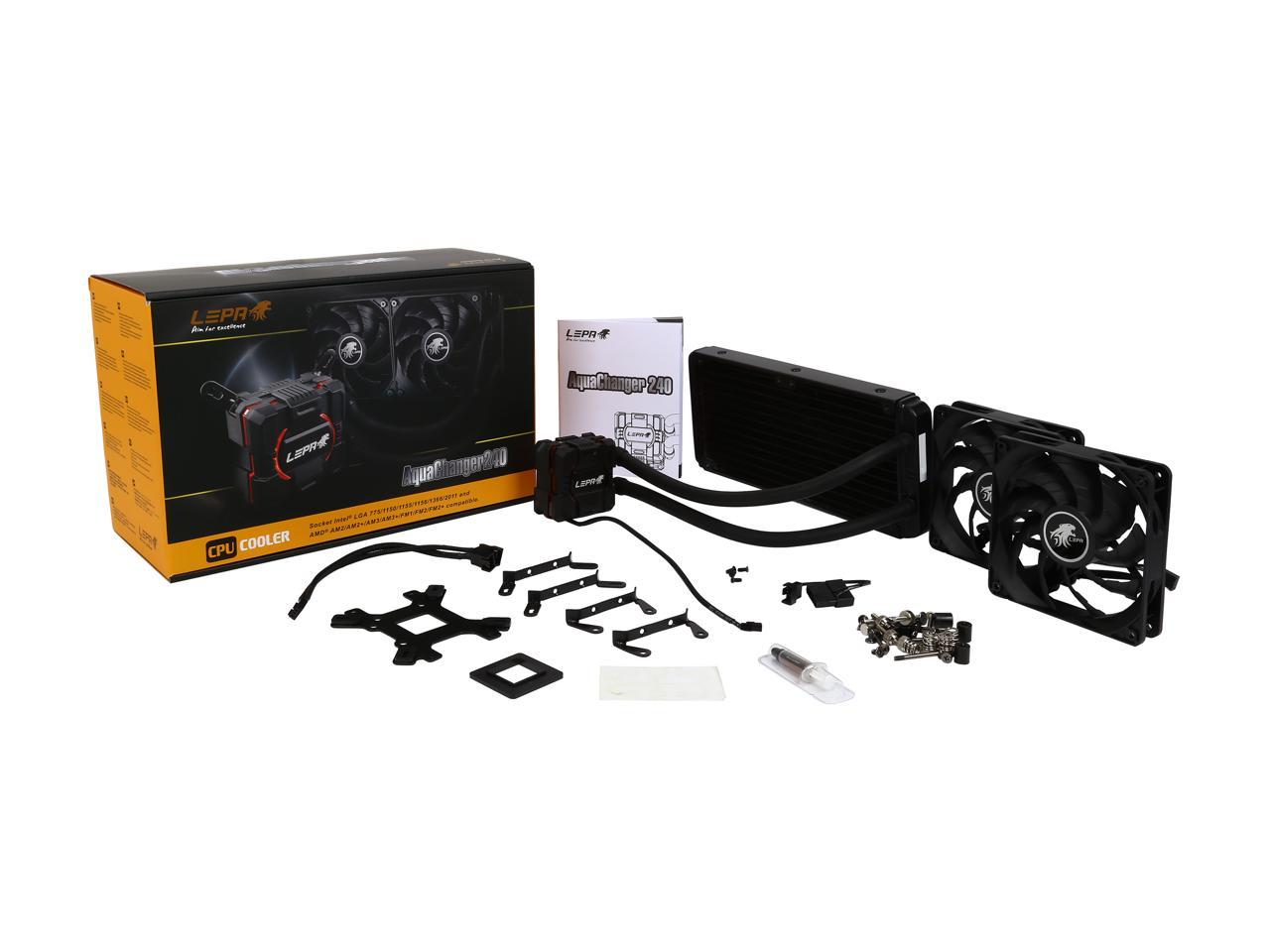 (174) Write a Review
OUT OF STOCK.
Overview
Specs
Reviews The protrusive structure enhances the copper base sturdiness and deploys more coolant for an efficient CPU hot spot elimination. Learn more about the LEPA LPWAC240-HF

Pros: Comes with everything you need to install! GREAT instructions, don't fear if you have never installed a watercooler- the instructions make it a piece of cake. Keeps my CPU super cool- 55 degrees C or under even at 80-90% load for extended periods of time.

Cons: None, absolutely love this product!

Overall Review: Only comes with 1 fan, so be prepared to buy another if you're going with a push-pull setup. This watercooler is absolutely amazing for the price, if you're on the fence- PULL THE TRIGGER- it's well worth it!

Manufacturer Response:
Thank you for your purchase. Not only do you get a deal you get high quality products.
Evan E.
Ownership: 1 week to 1 month
Verified Owner
Insane improvement from the Evo 21212/15/2015 1:57:30 PM

Pros: I came from a push pull evo 212 configuration to this and I cannot emphasize enough how much more cooling power this setup provides. I have a fx 8350 overclocked to 4.7 with the 990FX UD3 board and would occasionally get temps in the the mid to high 60s while playing some intensive AAA games combined with my overclocked 290 producing crazy heat. With this cooler I am not getting over 48 degrees max and that is while running prime which my last cooler couldn’t even handle. I am basically getting 20 degrees cooler than the evo 212. I was able to overclock to 4.9 with temps in the mid 50s but don't like how much voltage I have to put in my chip so I am keeping it at 4.7. Additionally I lowered my fan curve significantly and now can barely hear the cooler compared to the Evo 212 under full load. I have always been skeptical of AIO liquid coolers but I had LEPA fans before that I loved and this was on sale for $55 with MIR so I said why not try. After installing and testing this cooler it just screams high quality so I feel very good about going with this brand over the more expensive corsair coolers.

Cons: Not really a con but these fans are insane, on max they push 103 CFM and are loud as you can imagine. In my setup at 4.7 they never get above 50% speed so I don't notice the noise but when I was testing prime and putting 1.54 volts in my chip these things are like NASA wind tunnels which helped keep the temps down in the mid 50s. I don't think there is an overclock setup that this cooler couldn't handle but you end up sacrificing chip life and quietness.

Overall Review: You will not be disappointed. LEPA is legit.

Manufacturer Response:
Thank you for your purchase. Not only do you get a deal you get high quality products.
Christie B.
Ownership: more than 1 year
Verified Owner
Started off great...3/26/2017 7:49:10 PM

Cons: -Device has failed, it appears the pump stopped working -Reached and tried to contact the manufacturer 3 times and so far no response

Overall Review: I have filled out the information on their webpage, there is no email option and just a form to feel out. I don't even get a confirmation that my ticket has been generated...I had to end up buying something else since my system was overheating. Once I connected a Corsair H100v2 to the system everything was back to normal, actually a bit better. SAVE YOUR MONEY AND GET A BETTER DEVICE Save a bit longer to get the extra 30-40 bucks to get a Corsair or something better.

Pros: I was skeptical at first buying this AIO CPU cooler because I didn't know too much about the LEPA brand or their products, but my doubts were quickly put to rest once I opened the box and installed this product. Pros: - Solid build quality, the hoses are nice the thick and seem like they won't ever leak, quality connections on both ends of the hoses. - Very quiet fan once installed, I never hear it running, and that's also on load while playing Fallout 4 on almost max settings (my GPU can't handle some of the extra graphics features they include in this game). - There's a noticeable temperature drop on my CPU, and I use a program called CoreTemp to monitor that stuff, I'm noticing an overall 10 degree Celsius drop across the board, during load and at idle. - Cool red LED light on the heatsink itself, not too bright or distracting (low profile) which is what I like, but that's personal preference.

Cons: Cons (I guess): - I don't know if this really counts, but my room gets hotter, according to the thermometer in my room, which means the cooler is doing a better job than the CPU air cooler I had installed prior to this cooler. I guess that means it's doing its job! - Can't change the color on the LED on the heatsink to any other color than red, but I knew that going in and was fine with it. - Slightly difficult install (explained below).

Overall Review: - Just a heads up, make sure it will fit in your case, I measured mine before I ordered it and knew it would fit but it needs a fair amount of room for the hoses and such. The hoses coming off the heatsink barely touch my memory (I have 4 sticks) and while not a concern, it made me nervous at first. Also, installing this on your own could be tricky, for AMD users anyway in my experience, because the screws that come with the product that enter from the back of the motherboard don't "lock" in place or anything, and when you install the heatsink part with the thermal paste, it could be pretty easy to have those slide out the backside while trying to line everything up and press down accurately all at the same time. Luckily, I had a friend over while I was doing this and he held the four screws against the motherboard while I pressed down the heatsink and tightened the spring screws. I highly recommend finding another person to help you with this install for that reason alone. Also, the spring screws are really hard to get on at first, especially if you have anything less than a full tower case (I have a mid tower), and it was a tight squeeze to get my fingers in there far enough to start two of the spring screws. Also, don't over-tighten the spring screws too much, or you'll start bending the mounting bracket on the back of the motherboard like I did. In the end, the slight bends made me feel like it was on the CPU more securely, but I'm glad I stopped tightening when I did. Other than the install being a little difficult, it was totally worth it! Hope this helps!

Manufacturer Response:
Thank you for your purchase of our high quality products at affordable prices. Nothing but the best for your dollar!!
William C.
Ownership: 1 week to 1 month
Verified Owner
LEPA 120 cooler4/16/2015 6:14:33 PM

Pros: This water cooler is very nice and compact. One of its best features would be the Red LED light on the pump/water block. It lets you know that it has power. I have tested it against another water cooling system where I had a separate Pump, Block, and Radiator. It has outperformed it by 10c. My CPU now idles around 35c and under load hits 43c. CCC's new system displays "Thermal Margin" and that is kinda the reverse of normal, so my system on average stays around 50c and goes as low as 35c. So this cooler really does the job well.

Cons: The only negative is how ridged the lines are. There isn't any way this unit can be installed without the water lines getting the way of viewing the unit. I tried installing it with the Radiator it the top with the lines facing the back, then to the front and finally I installed the radiator out the back with the lines to the top. The water lines going into the pump can't be adjusted as far as I can tell, or at least I didn't want to snap them off trying. Also the water pump housing is a little on the wide side for my GA990-XA-UD3 motherboard. It is a tight fit against the memory modules. And that is why it lost an egg for me.

Overall Review: If you are looking for a budget all-in-one water cooling solution than this is for you.

Pros: I was going to get the Corsair Hydro Series H100i, then I saw this one was almost a 3rd of the price and the reviews were just as good, so I got it instead and saved a ton of money.

Cons: none that i can see yet

Overall Review: Will update if any changes. So far with this thing my intel 6800k cpu almost never goes above 40-45c, even while running games such as rage or watchdogs 2 at ultra settings, love it so far.

Pros: What can i say it does a good job for me, i run it on an A8-7600 quad core kaveri and under load it keeps it at around 40 - 45 degrees celcius works great idle temps about 33 degrees celcius.

Overall Review: setup can be a little difficult but managable if you have a helper its very easy. i recommend and the red led matched my setup perfect.

Manufacturer Response:
Thank you for your service. Not only do you get a deal you get high quality products.
David A.
Ownership: 1 month to 1 year
Verified Owner
Great AIO5/19/2016 6:51:40 PM

Cons: Fans are loud at full RPM, however doesnt bother me because i only run them at half speed.

Manufacturer Response:
Thank you for your purchase. Not only do you get a deal you get high quality products.