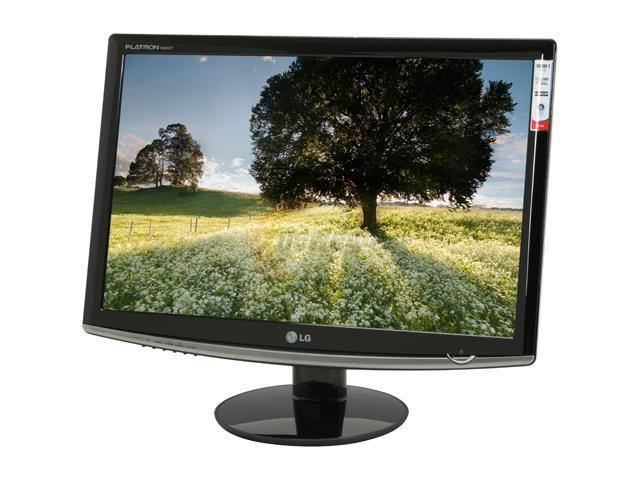 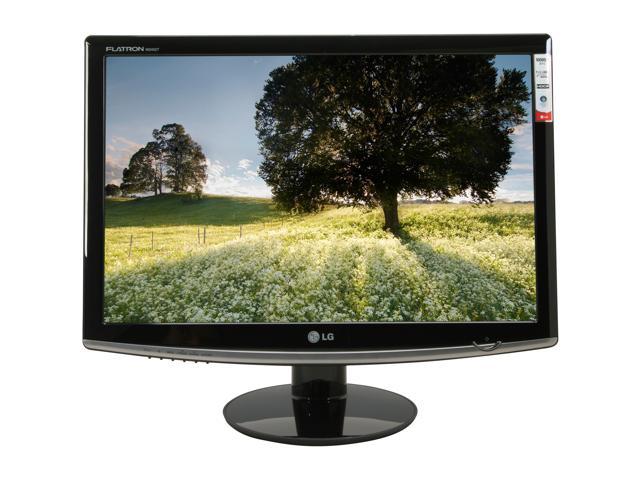 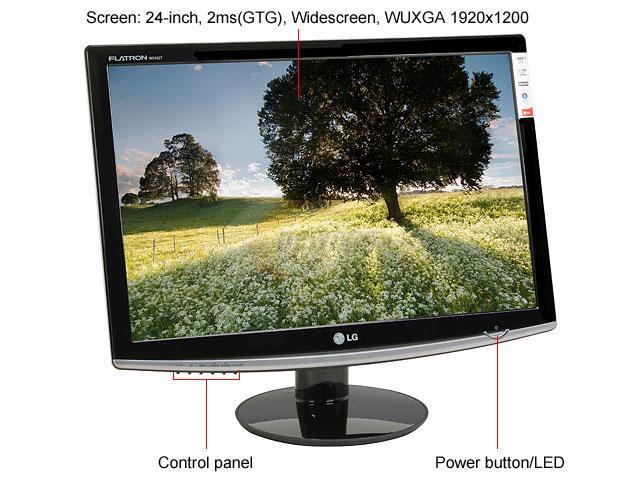 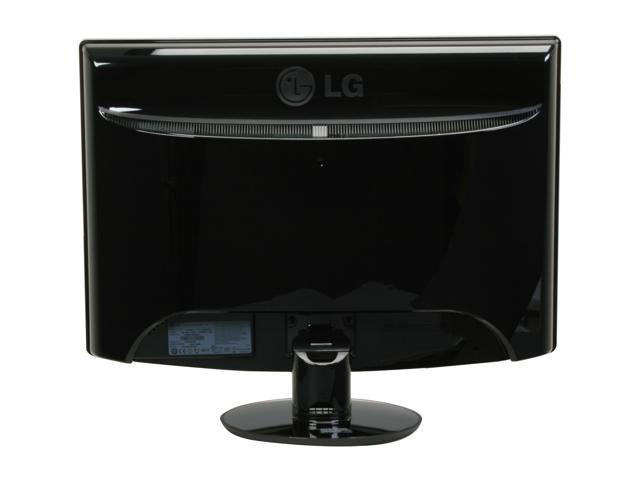 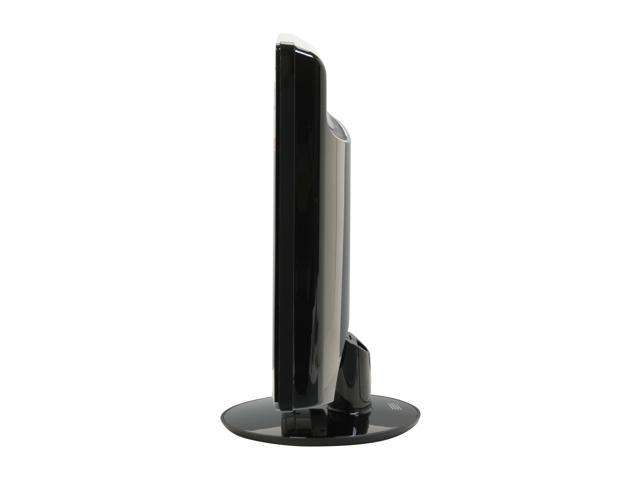 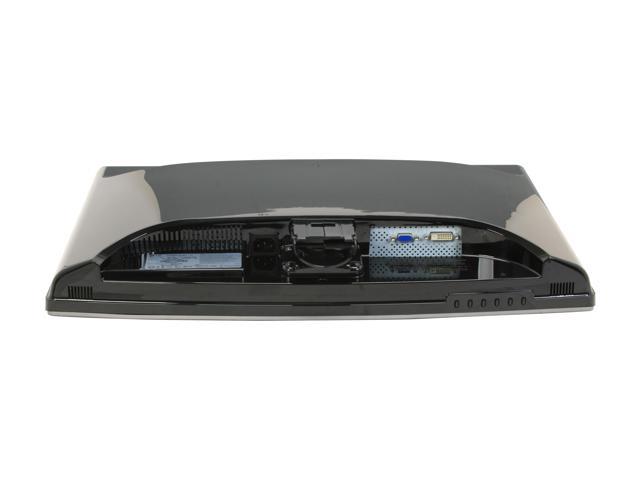 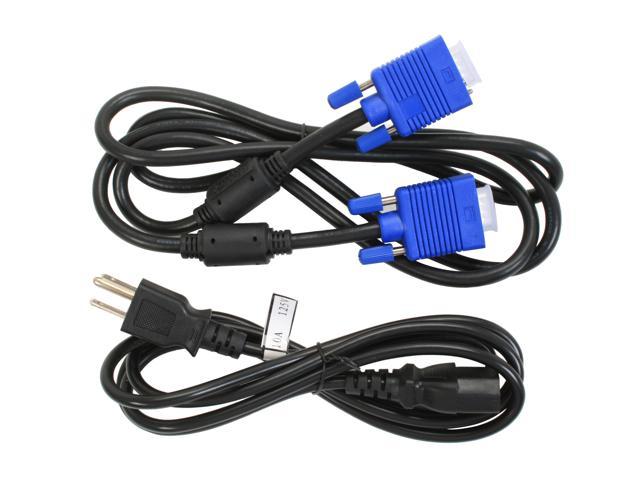 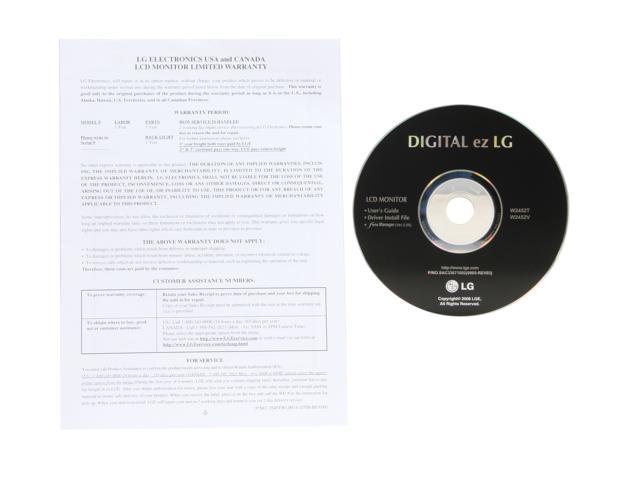 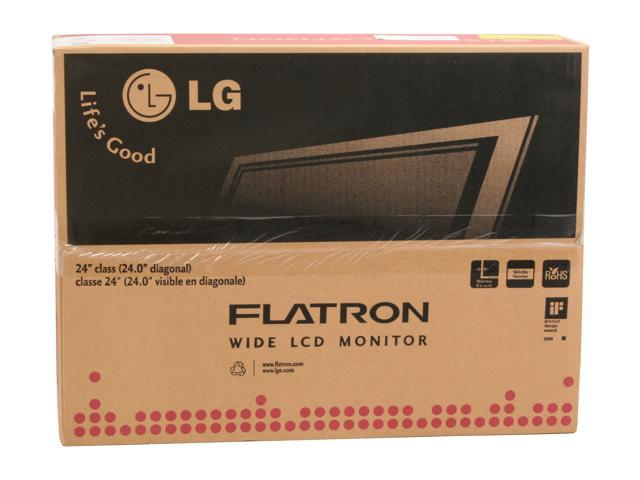 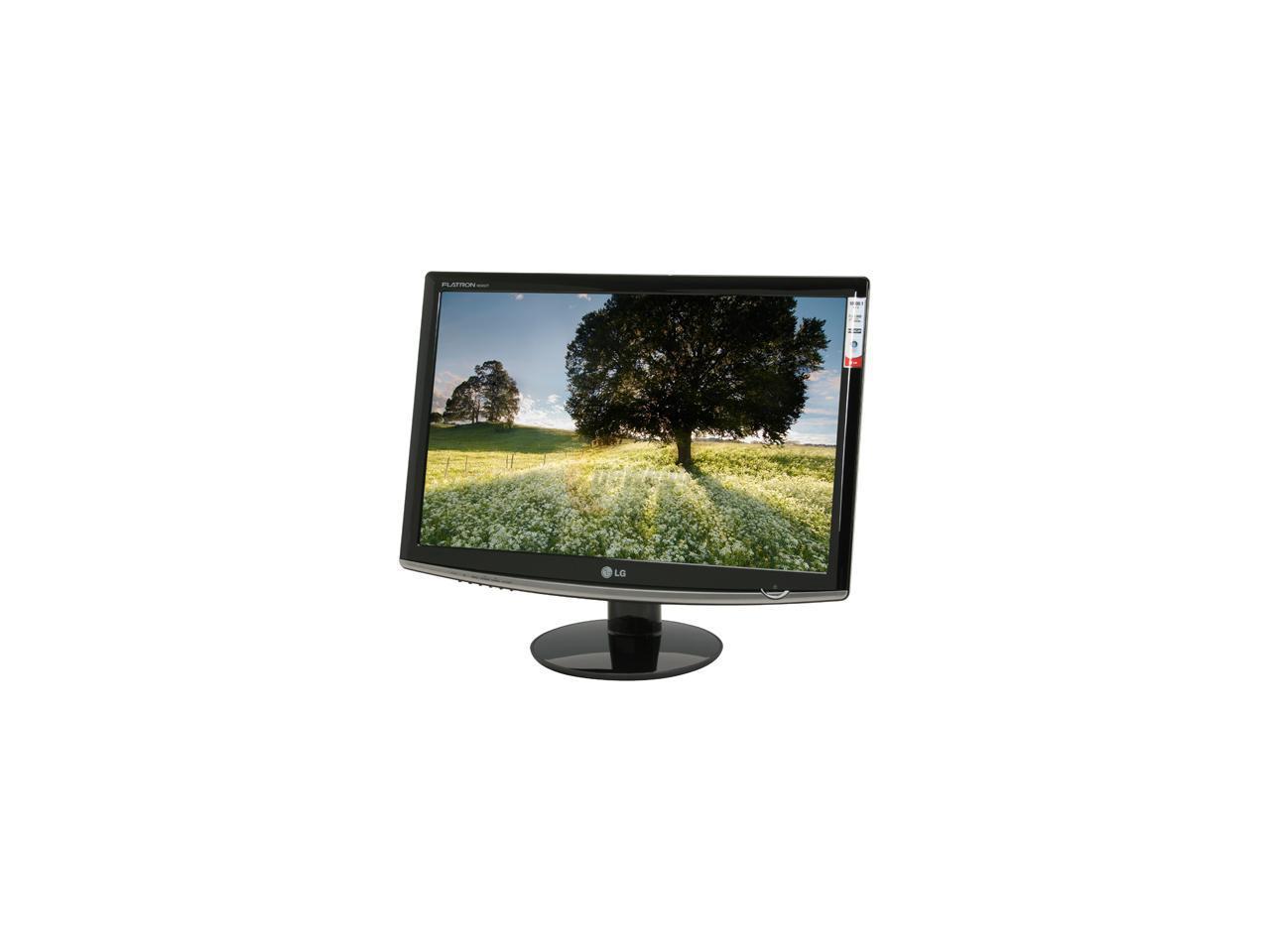 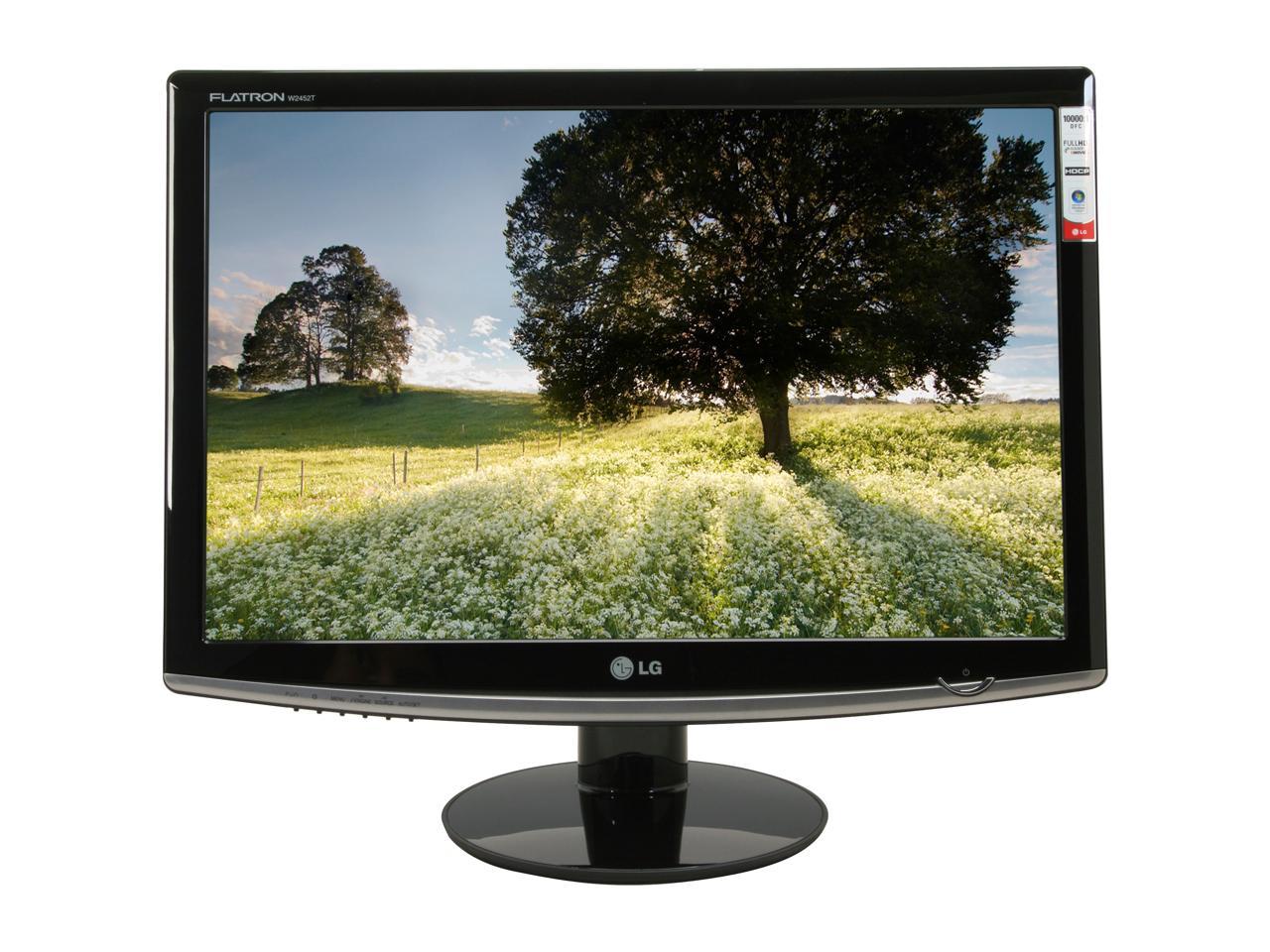 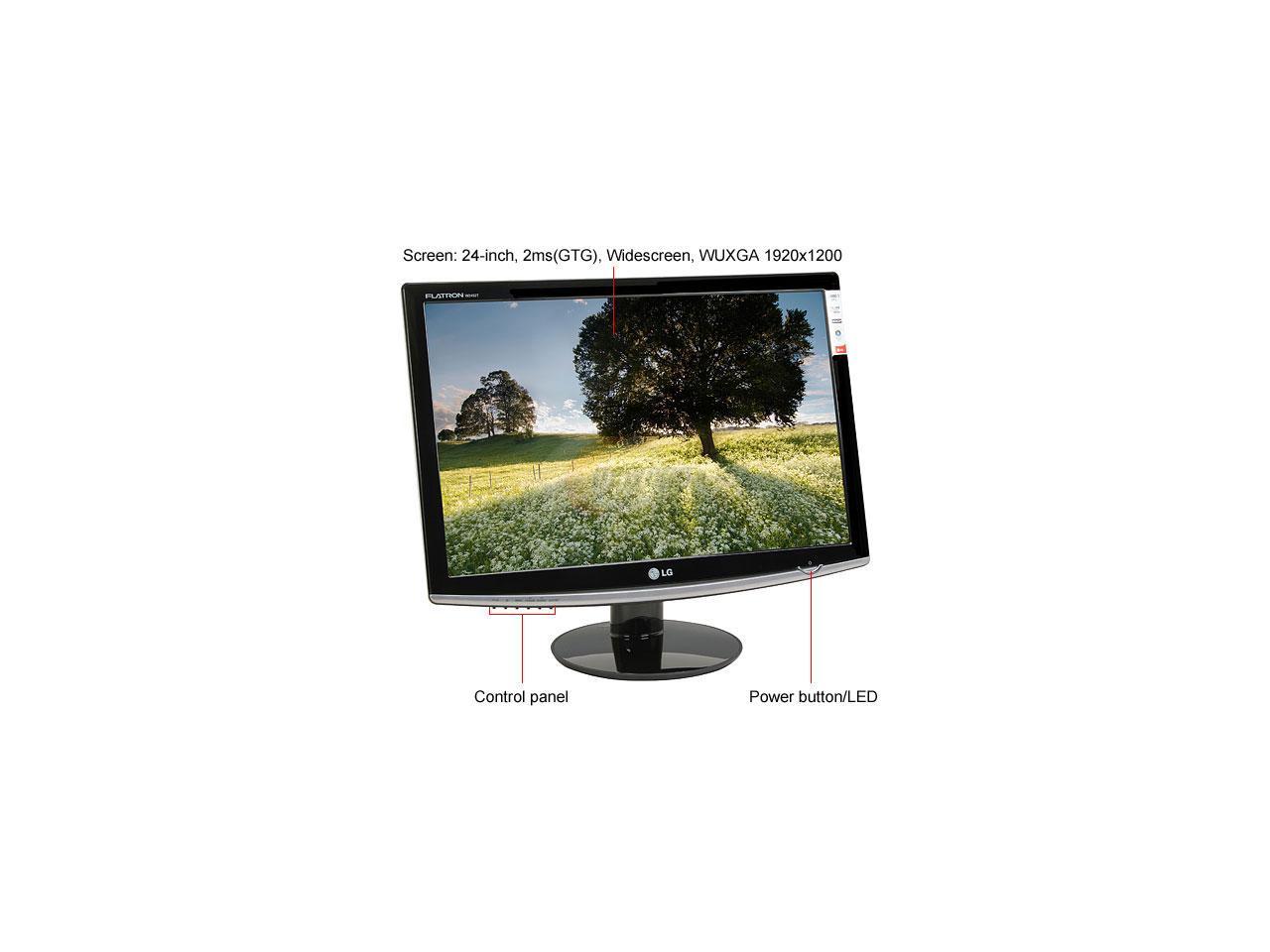 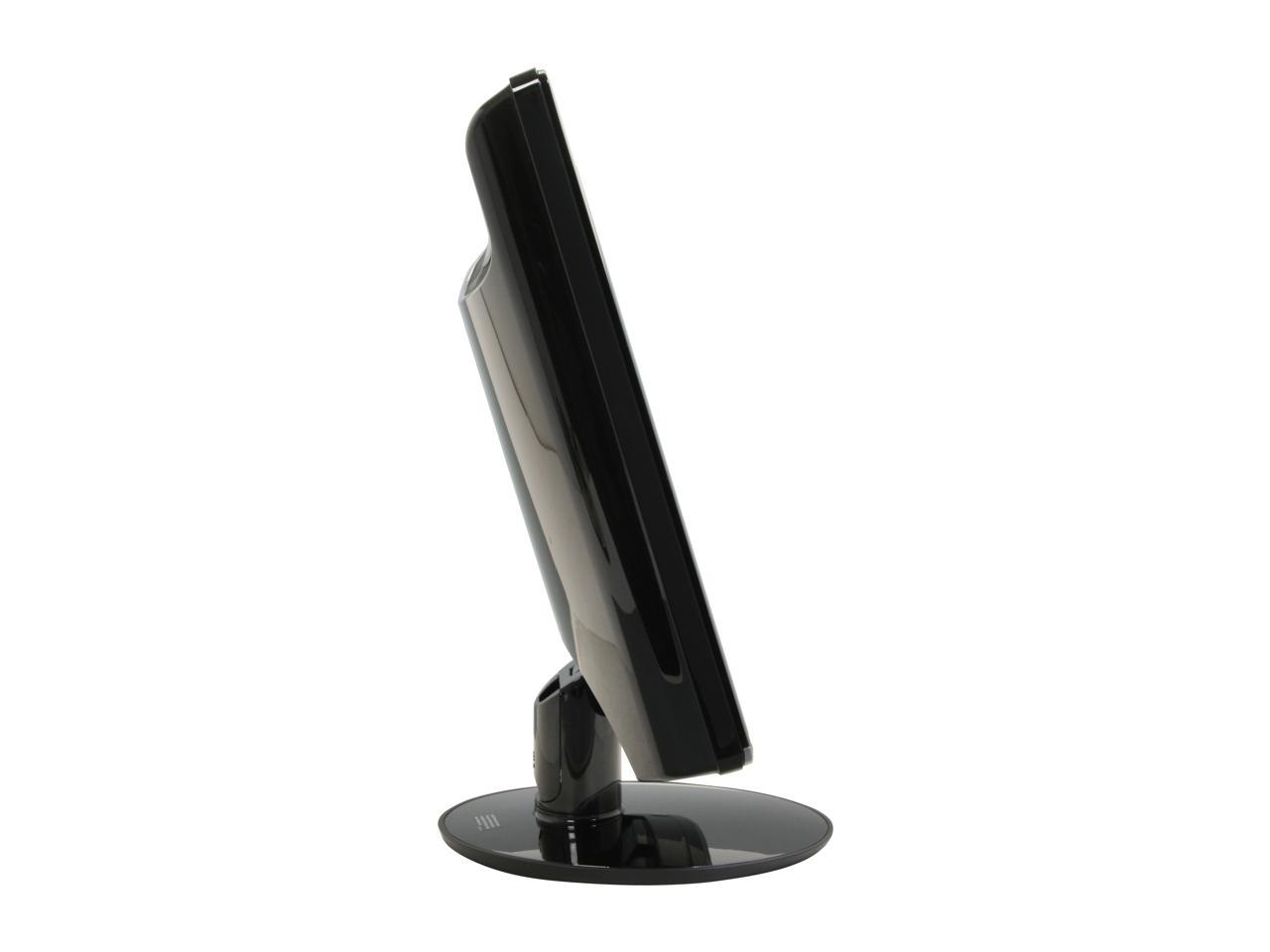 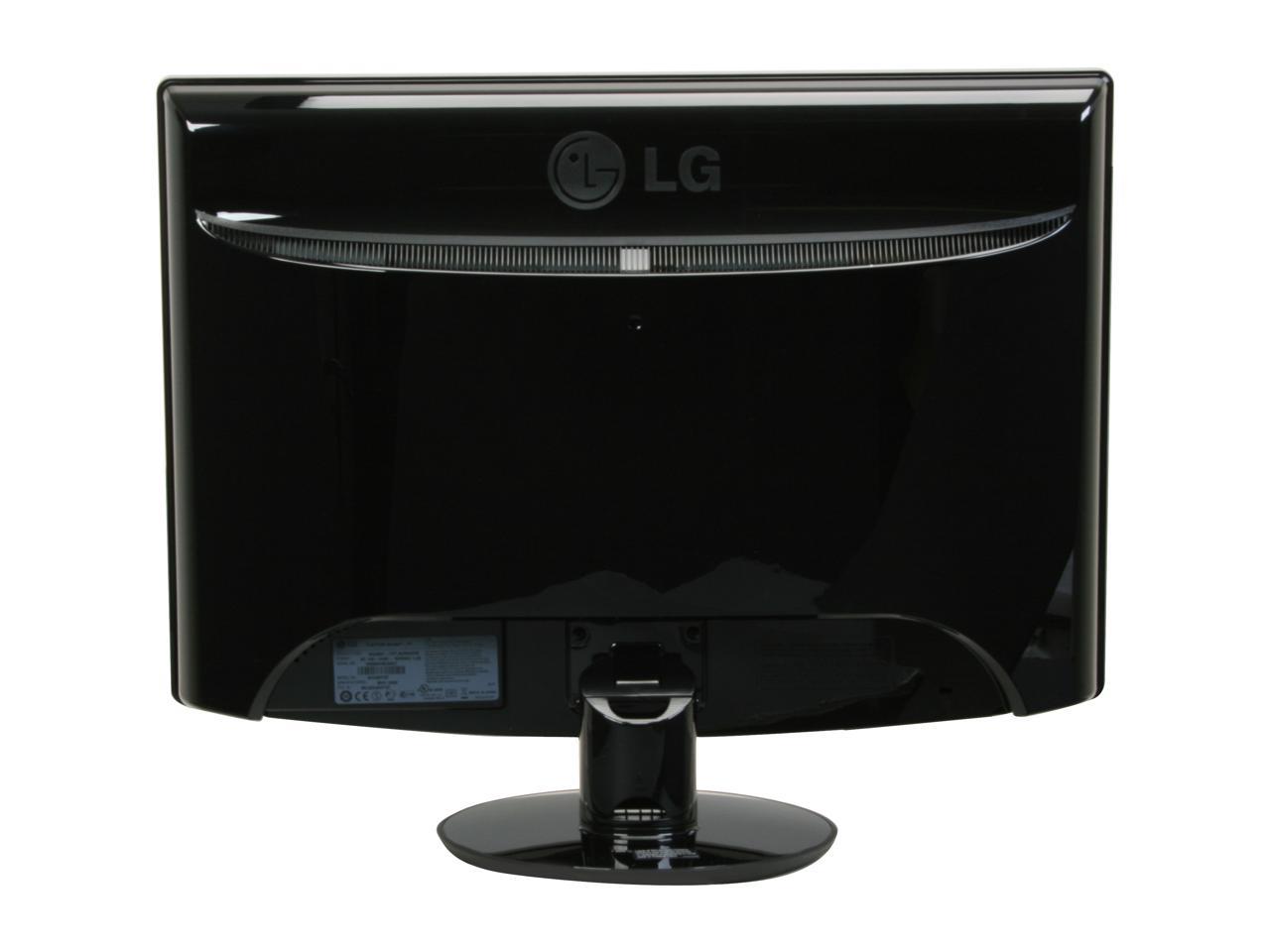 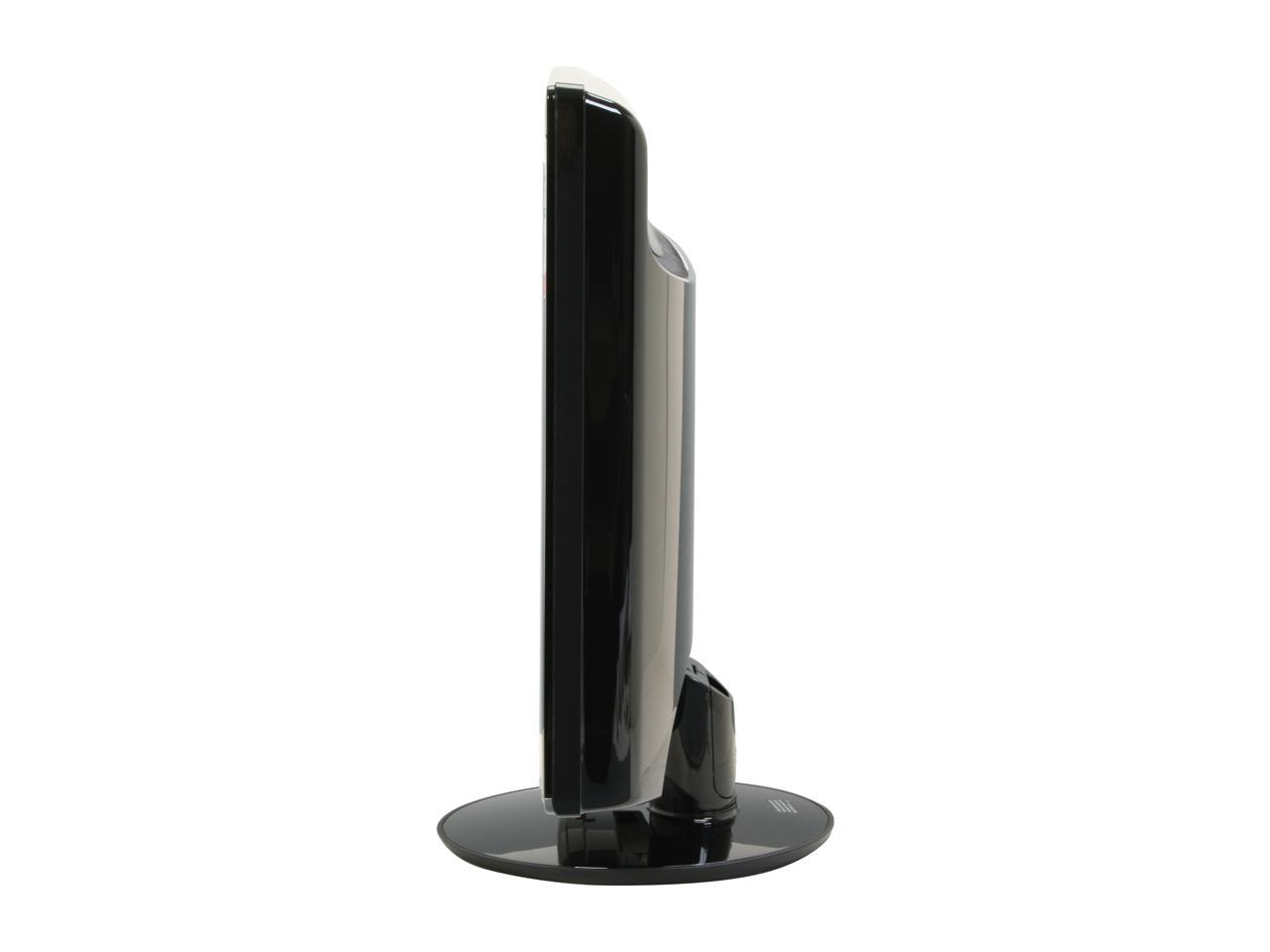 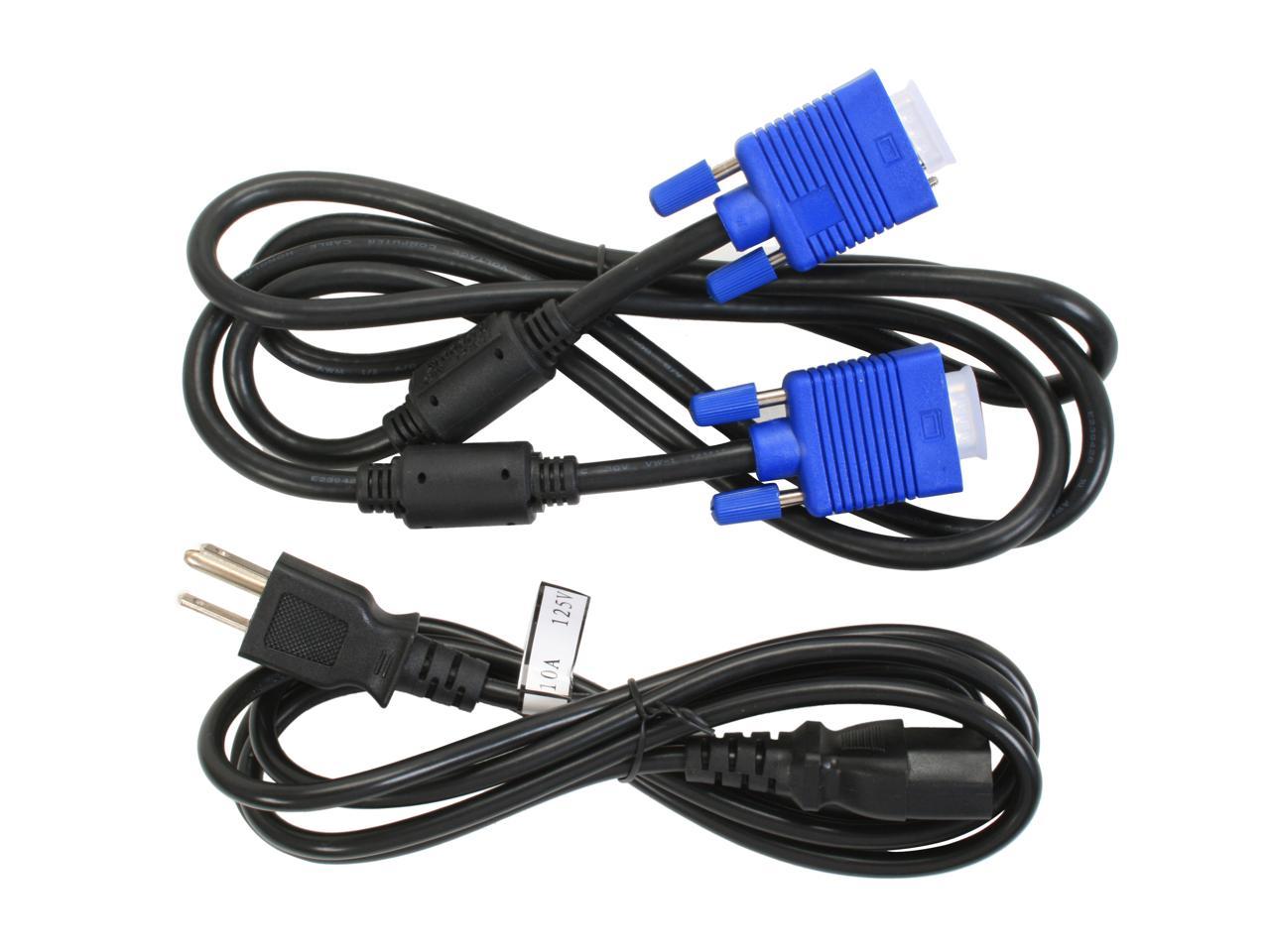 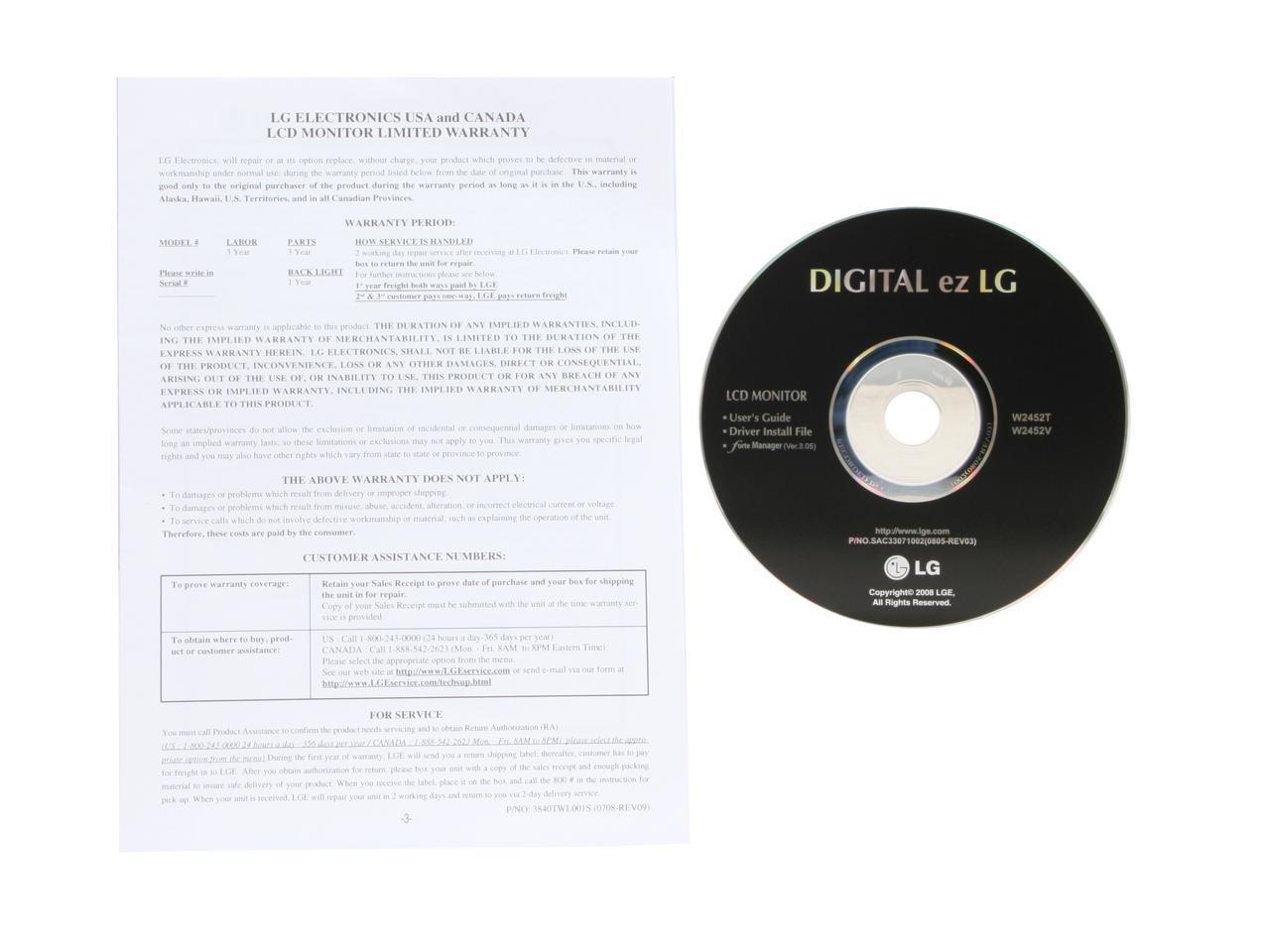 (78) Write a Review
OUT OF STOCK.
Specs
Reviews

Pros: I went from an LG FLATRON L1720P (17" non-widescreen LCD) that I've had since 2003. This is my second LG LCD. The picture is vivid and bright. The bezel is nice. The setup was easy. It came with a power cord and a VGA cord (no DVI but I used my old one). I did a good amount of research comparing specs, and for the money it's a solid monitor. A lot of the things I've seen complaints about are that there are no connectors in the monitor itself. I personally don't want that. I'd rather have things I'm hooking up via USB plugged into the back, so as to not take up precious desk space. I also have never needed to adjust my monitor's height adjustment. I think the 25.5" version does have a height adjustment. Buy if you're looking for a solid, good-looking monitor from a good company, with good picture quality at a good price.

Cons: Bad drivers on CD? Had to use default Plug and Play driver supplied by Windows XP SP3. I wanted to set the resolution to 1920x1200 (its native resolution). I easily did, and on my current system I can even go as high as 2048x1536. I wanted to do the same for World of Warcraft, but the 1920x1200 resolution was not available once installing the driver that came on the CD. To access that resolution I had to uninstall the driver and go back to the "Plug and Play" driver that Windows XP SP3 detects. I don't know if this is something wrong with my computer or the driver, but it's something to note.

Overall Review: I like the sounds! Leave LG alone for having them! I ordered this Monday morning (New York City) and received it early Tuesday afternoon. Great job Newegg with the free shipping!

Cons: Don't use LG W2452 Monitor Drivers if you are a gamer. The LG driver sets the maximum resolution to 1680 x 1050. When I called LG regarding this issue, they noted that the default Windows monitor driver will allow 1920x1200 resolution. LG changed their driver due to the number of nvidea 8800GTX owners that were having trouble at 1920x1200.

Overall Review: LG should fix the problem with the 8800GTX conflict versus downrating the max resolution on their driver. This was a poor "fix". This was not a feel good moment for my first LG product.

Cons: Wobbly stand, and i cannot get the monitor to sit right on the stand, its a little crooked. Shipped to me with one stuck pixel, its red and its annoying I expected more from LG, hence the 4 eggs.

Overall Review: It's not a bad monitor by any means, i just wish it had 8 stuck pixels so i could get a replacement, i have tried all known methods of "unsticking" it, to no avail, oh well, guess ill have to deal with it

Pros: Amazing picture! Bright, crisp, great definition along with lightning fast refresh. From corner to corner it stays on the money. No bright spots along the sides and best yet not a single dead/stuck pixel. Quality picture with good all around performance. Not a bad price either. Paid more for a standard 19” three years ago and this smokes it hands down.

Cons: Base is kinda weak and as mentioned before no DVI cable?

Overall Review: I love this monitor, just remember you will need a beefy video card to pump out decent frame rates in a game at the native resolution. The good thing is the video cards that can do just that are dropping below $200.

Pros: Still recommend even though I had to RMA mine back to NE.

Cons: After 3 weeks of ownership, a one pixel wide vertical line developed almost dead center on my monitor. Had to RMA it back to NE. After a search on the net I was surprised to see how many LG monitors have this issue. Not necessarily associated with a model number either.

Overall Review: Totally bummed. Heres to hoping my other one won't have this issue.

Cons: Not a lot of inputs (I don't need them anyway). The stand is kind of shakey. The monitor shakes with the slightest bump of the desk it's on.

Overall Review: Oh man this thing is HUGE!!!! I went from a 19" Dell to this and man the difference is like night and day! Overall, this monitor is amazing and i would recommend it to anyone!

Pros: The resolution and contrast is amazing, so is the price point. NO DEAD PIXELS!

Cons: Controls are rather difficult.

Overall Review: Newegg says it's VESA mountable, but I don't see how. I hoped to hang this darling on my wall, but there are no square-patterned VESA holes on the back of it. To do so :-(

Pros: I am vary happy with this monitor no dead pixels at all works great with Blu-ray movies and video games. the color has been great its alot better than the 22" LG i had before and there is no noticible backlight showing anywhere, there is very little setup needed which i liked but i still took my time to look at all the settings. I do recomend this monitor to anyone who needs a good fast monitor to keep up with movies and games.

Overall Review: I also heard alot of complaints about the stand being a flimsy if you dont bump your desk the monitor won't move even if the monitor does move it takes 2 seconds at the most to fix so its not a big deal.