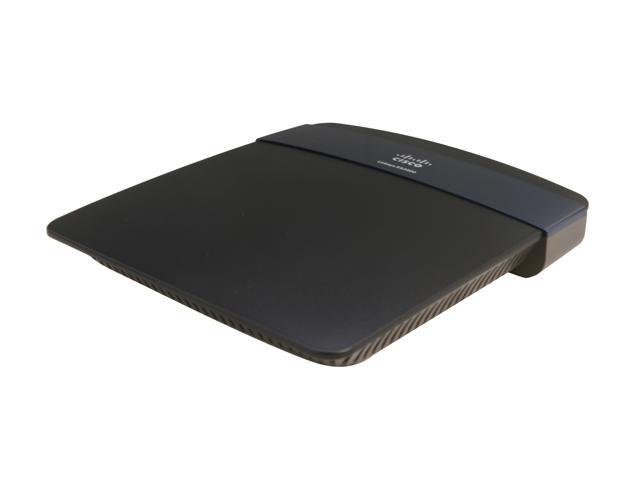 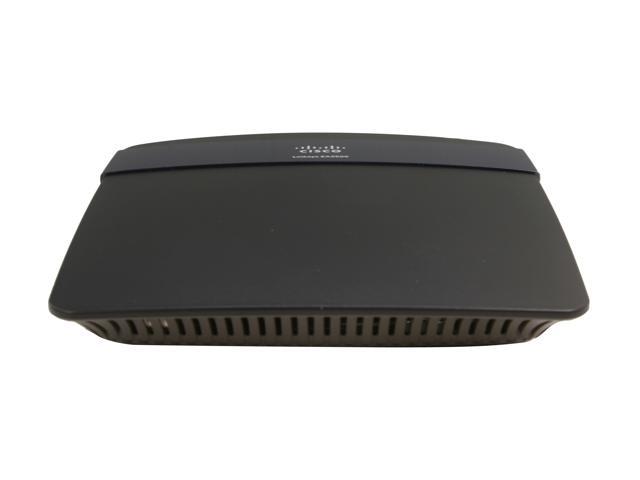 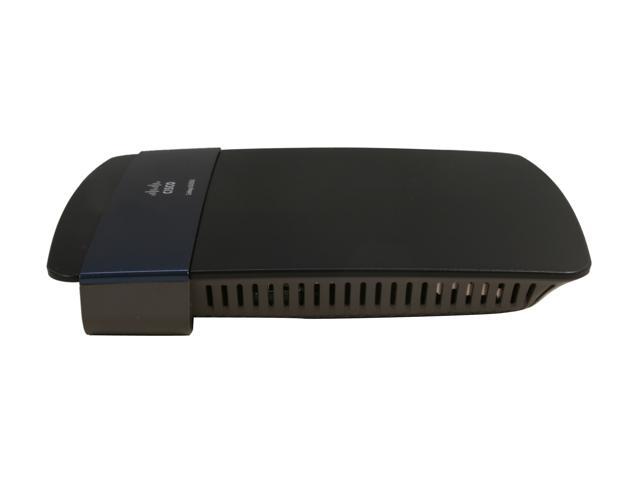 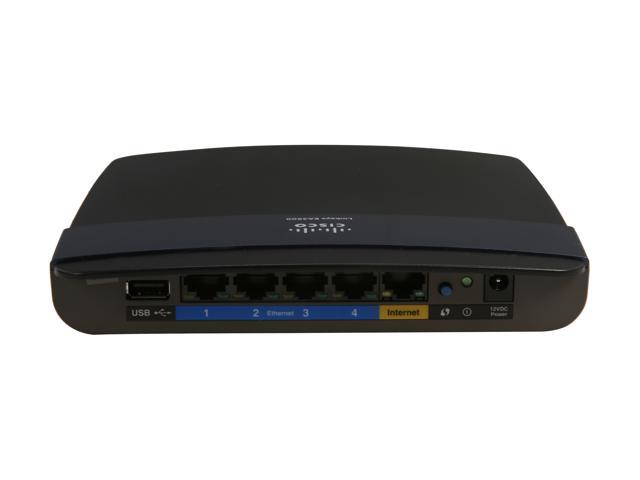 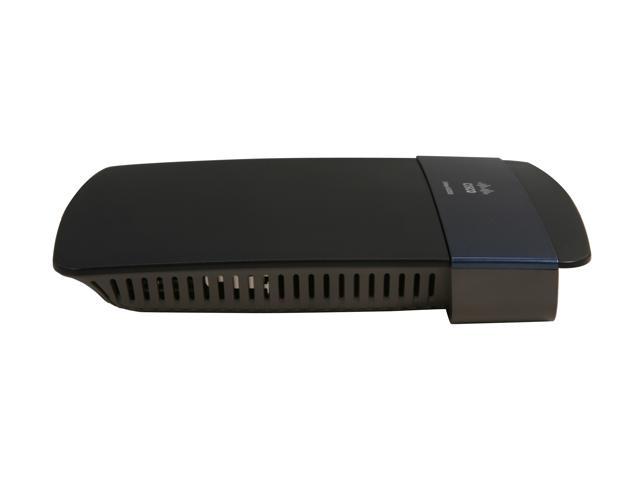 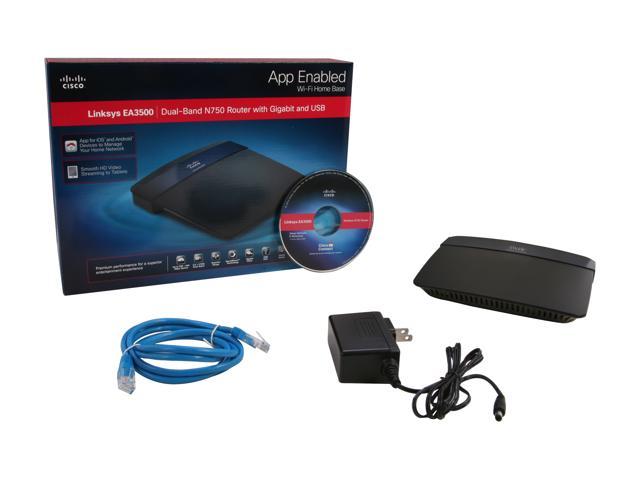 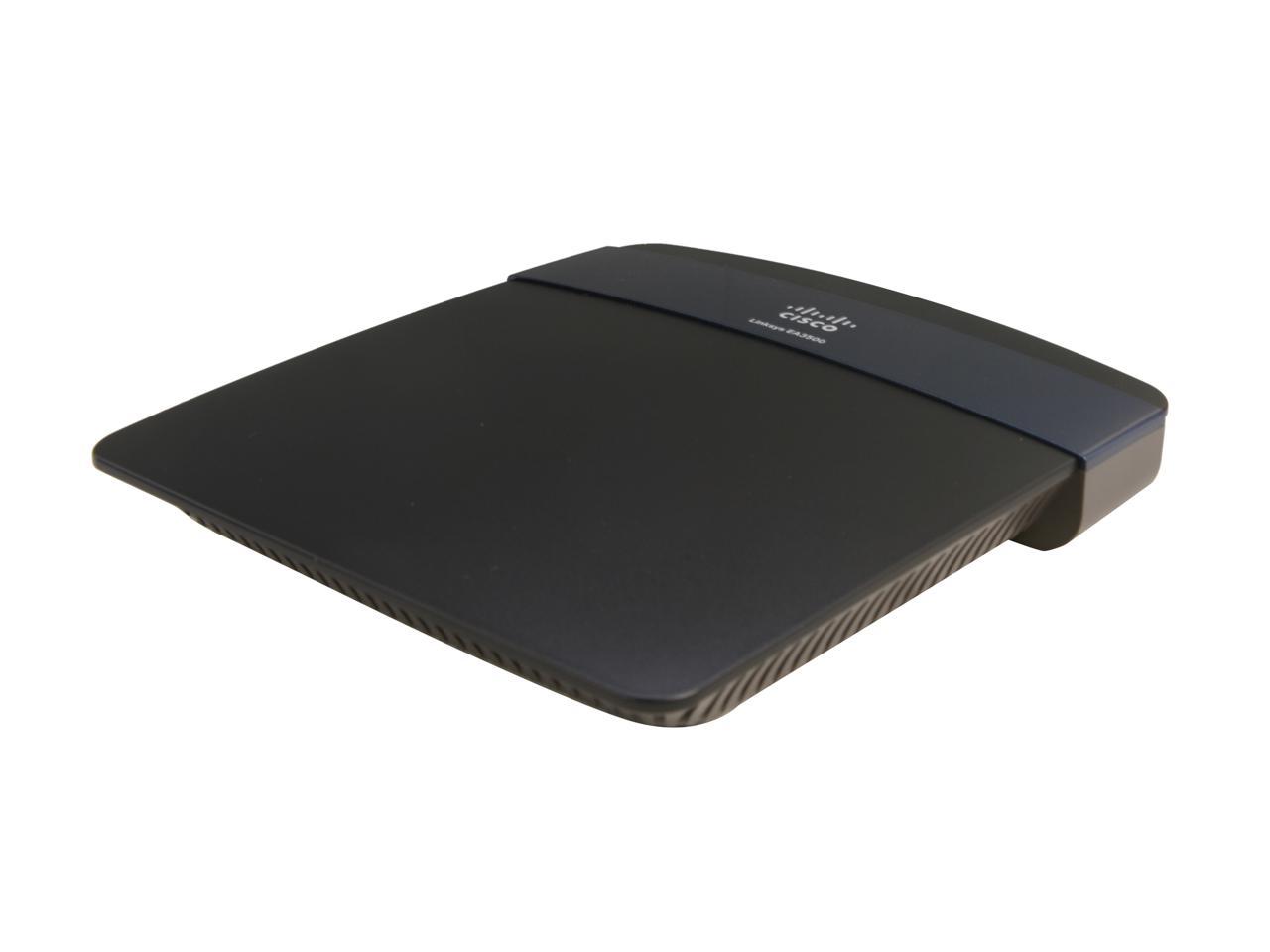 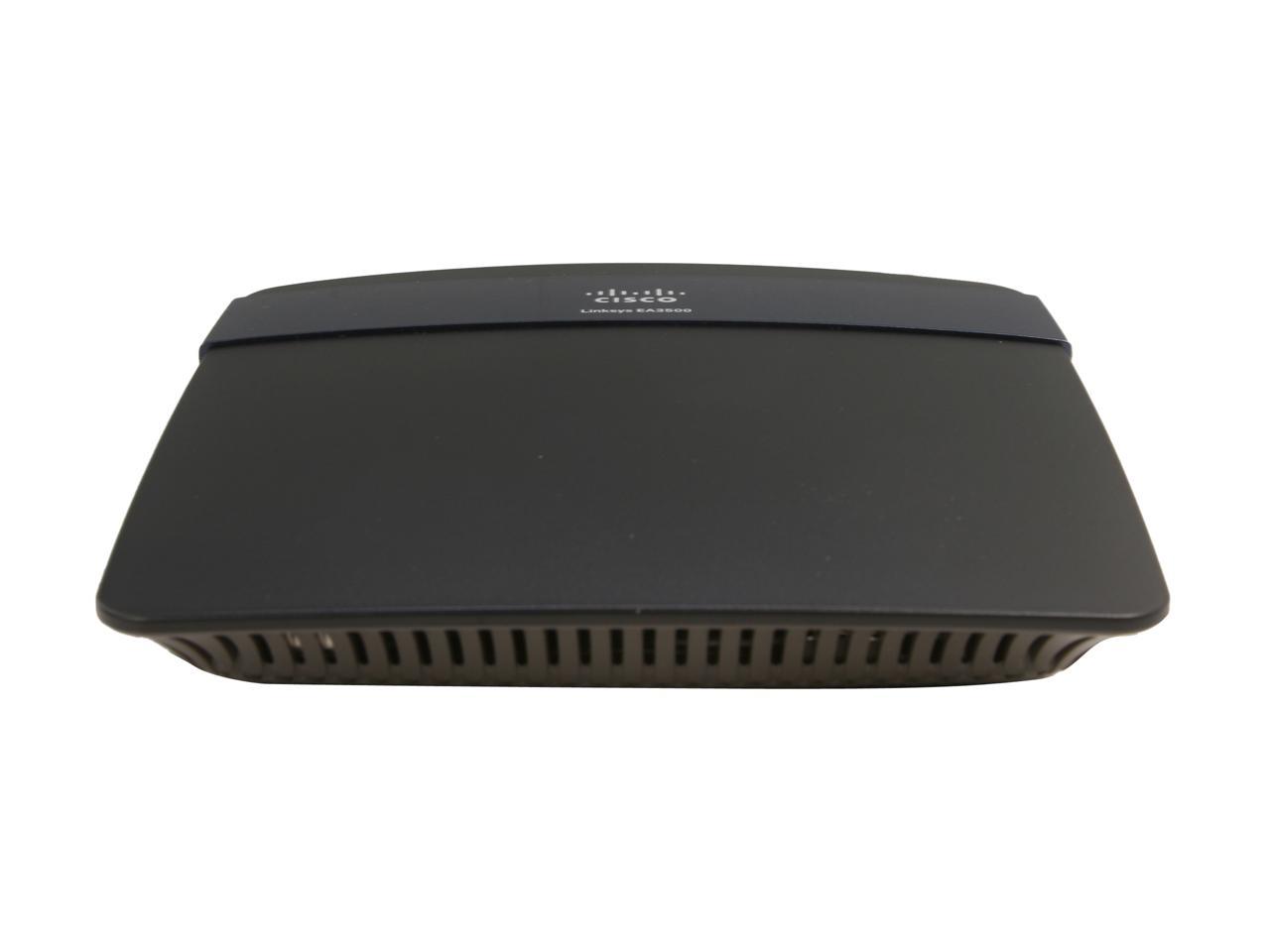 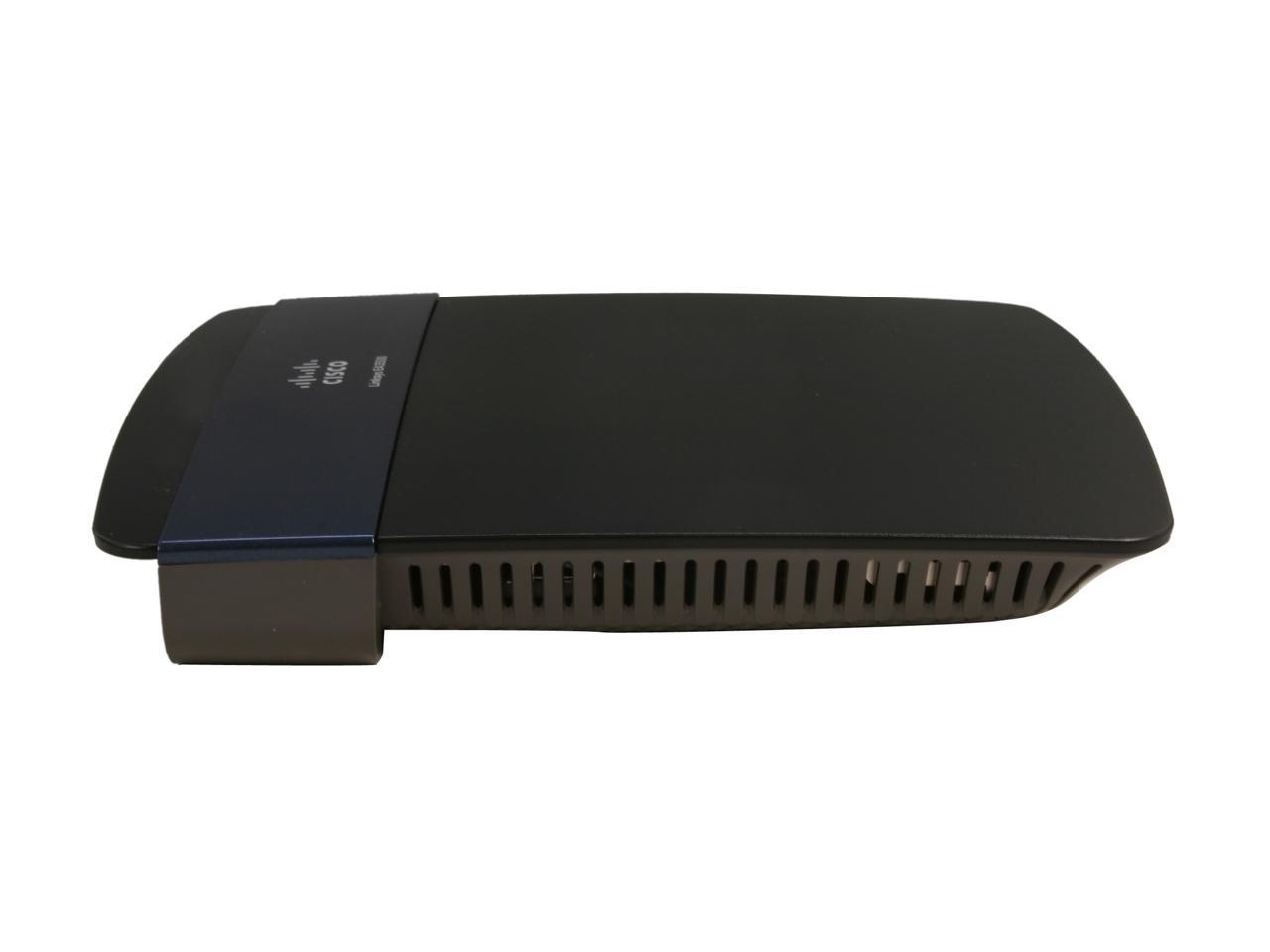 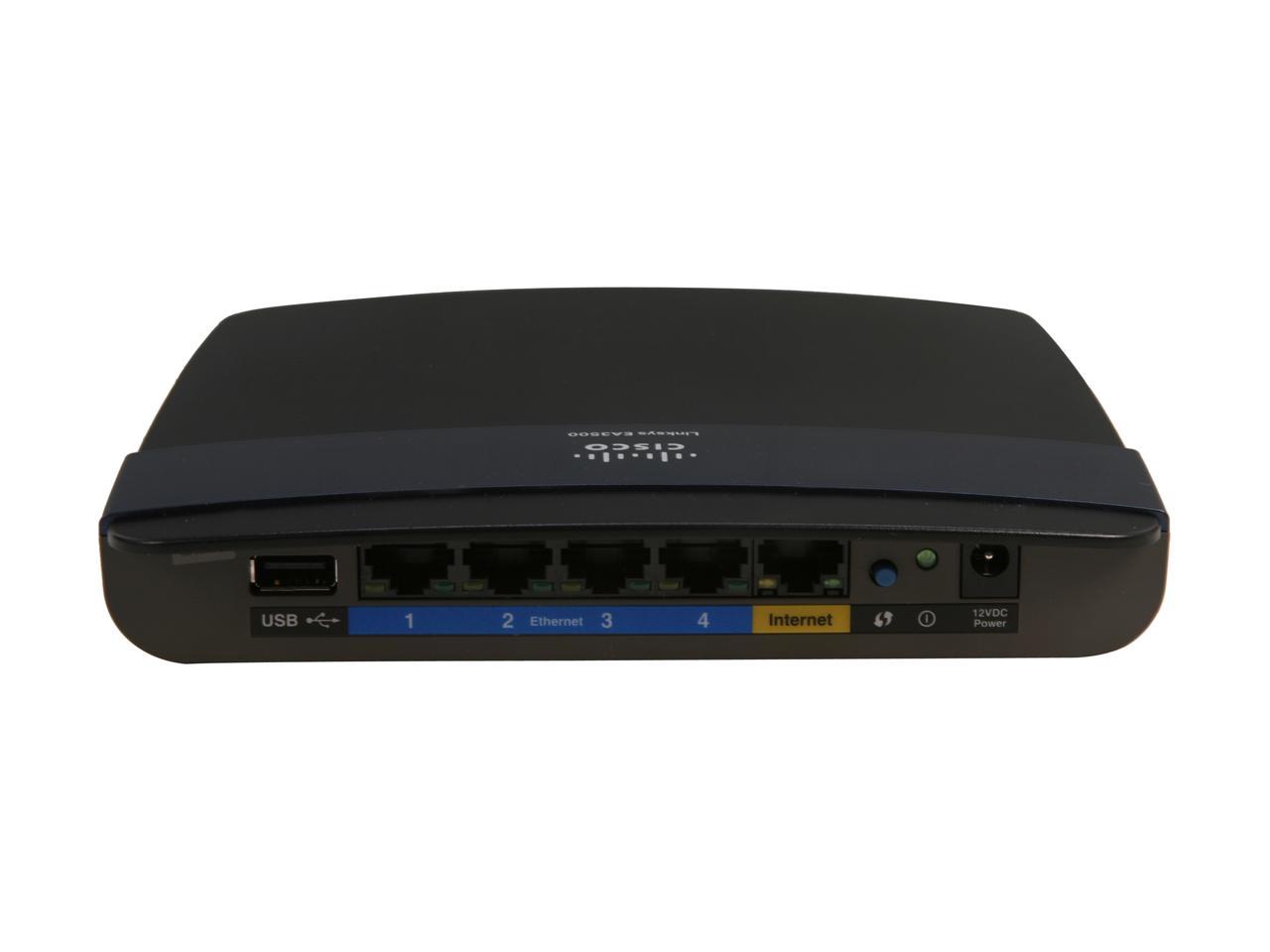 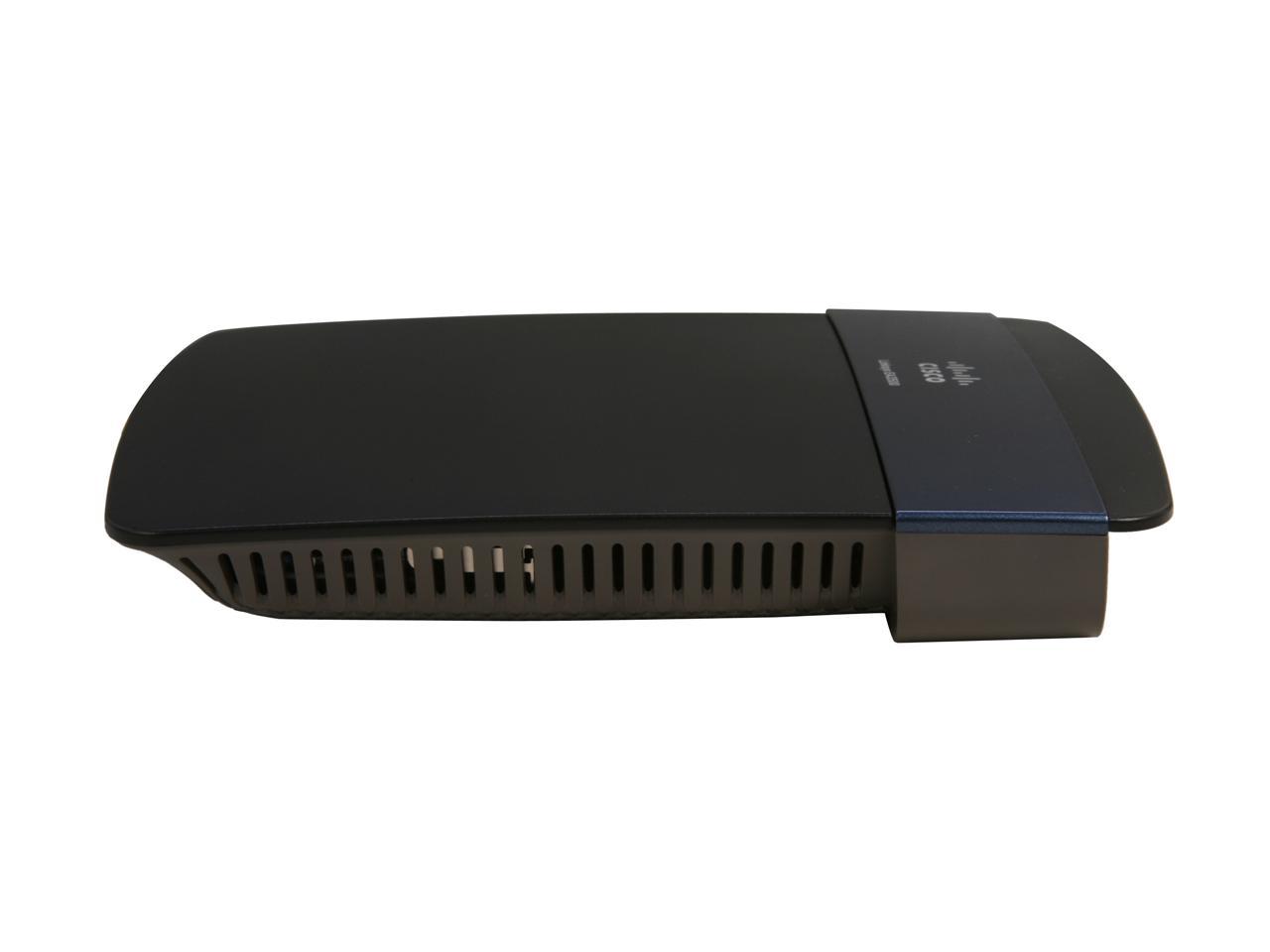 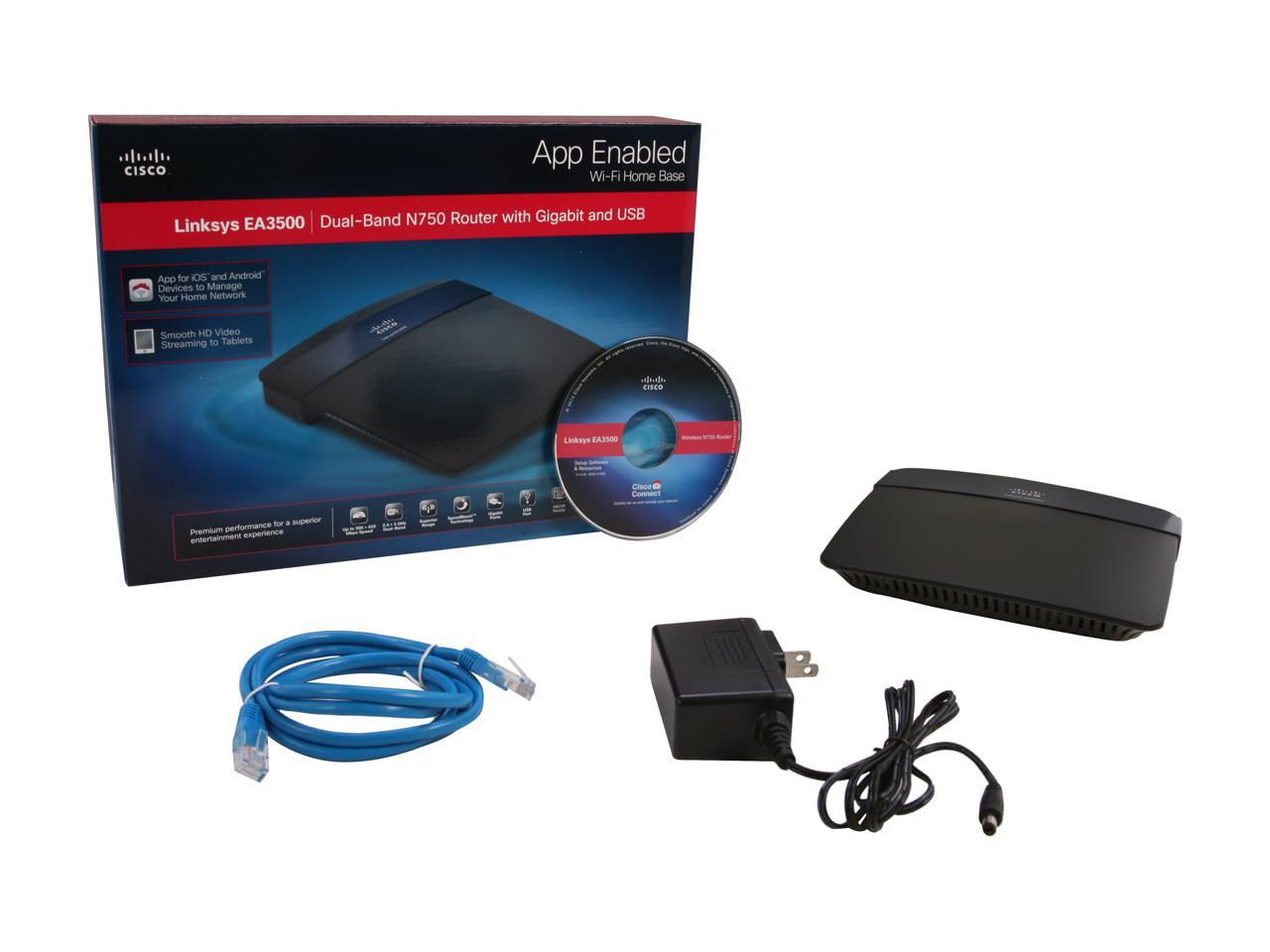 Learn more about the Linksys EA3500

Pros: Easiest Interface setup I have ever seen and used. Linksys Smart WiFi makes even the novice user able to configure this router. Big, pretty widgets and easy configuring options means there isn't a person who should not be able to configure this router. Gigabit routing speeds from the router are extremely fast compared to my D-Link DIR 855L and Asus AC R6100. Speed tests measure throughput above average and speeds from my Charter 30 Meg Internet at ~ 36 Mbps. No annoying lights to drive you crazy. Lights able to be turned off on the back of the unit using the intuitive software. Sleek, minimalist look and space (negatives coming up). Cisco branded (although the LinkSys brand is now owned by Belkin).

Cons: Where do I begin. First of all, I own two other routers: Netgear R6100 AC and a D-Link DIR 855L. Out of all three of these routers the R6100 had the best throughput and speeds/range for the AC Band, N Band, and G Band (2.4 and 5 GH/z). D-Link offers unbelievable throughput through all substances but has a tendency to drop connection to my Internet (Motorola Extreme SB 6141) several times a week for a few seconds (more an annoyance with no fix working yet from D-Link. They pretty much gave up). This Linksys though offers the worst range in my home compared to the other two and for the cost that isn't good news. Okay so the minimalist look is sleek and sexy and yet under-powered. The physical connection has the best speeds physically out of all the routers in my testing but it just cant project even a 2.4GHz signal at the strength and speed of these other two routers. Nevermind the 5GHz reaching my Samsung Galaxy S4 AC/N 5GHz band because it is so intermittent in power it is unreal. I have had twp laptops, two SGS4s, a PS3 (on G Mind you) and a wireless printer right next to the Router (with 3 bars out of 5!!) drop the connection and reconnect several times. Speeds are slow even with just one connection (my phone) and lags when sending data. I don't live in a house that has much interference as far as building materials. Do yourself a favor and see if a firmware update will improve this on subsequent reviews. As of right now, there is no new firmware.

Overall Review: While I rated the router a 3 egg it could go down to 2 eggs considering issues with maintaining any sort of connection. I have relegated to using my DIR 855 L in wireless AP Mode and that has been a boon to everything from just having either the Linksys or D-Link routers as the standalones. Positives I didnt list above include the apps you can use with this for either Android *YA* or iOS (BOO) and the security features (you cannot move forward with setting this up without setting a security password). If They can improve the wireless radio signals (maybe go back to having 2-3 antennae on the outside of the device or using more powerful internal antennae arrays from Broadcom,or Qualcomm) then this would be a 4 egg easily. When they say Smart Routing family they aren't kidding, it just needs to be smart when making a connection wirelessly.

Cons: One of the most difficult routers for the novice users to set up. The recommended way to setup with DVD is obsolete (None of my home computers have spinning disks / drives anymore) Menu is extremely complicated (Dyndns under security menu??) LAN IP addresses are 10.211.XXX.XXX (Seriously??) Sometimes accessing the router through web interface throws a "Bad Gateway error", and takes a good one minute to load Changing DNS servers is tucked away under local network menu instead of WAN menu. Changing some settings (like something under QoS menu or changing DNS server for e.g. )will crash the router and it will need a hard reboot. QoS implementation is a mess (reduced the speed of my 20MBps Internet to 12Mbps using both router's speedtest app as well as on my laptop) This router does not yet have a killer app/feature that distinguishes it from the rest of the simultaneous dual band products.

Overall Review: This router seems like a work in progress, with Linksys (Now Belkin) moving towards cloud accessibility of its routers and have started selling additional router apps. Most of the important settings are tucked away under random menu names. QoS needs a lot of polishing and is still beta IMO. Sometimes the 5.8GHz wireless SSID shows up as MarvellAP8X. Hopefully Linksys will fix these pending issues soon with a well tested firmware or allow open-source firmwares.

Cons: This new "cloud connect" thing Cisco is doing is a bad idea. Auto firmware update is on by default and some users have had to authenticate using a different account, without warning. And even with auto update set to 'off', these automatic updates can still happen, whether you want them or not. Cisco can also shut down your cloud account if they think you've used it for things they don't like. The Only way to access the router is through their cloud, so closing your cloud account means you cannot use your router.

Cons: Continued almost from the beginning to drop off line, would re-set and would be fine anywhere from 30 minutes to 2 or 3 hours and then drop again, returned to NewEgg with no problem within 30 days for a full refund and re-installed my 5 year old Linksys 54G and have had NO drop off since. Return to NewEgg was at my own expense.

Pros: I DID NOT use the CD to setup this device - set it up manually, which was very easy. Menu options are straightforward and easy to understand. Help is available on every menu page. Options are not as confusing as with some of the earlier WRT54xx series wireless routers. Option to split network into 2 separate HI/LO frequency subnets is great for video streaming if combined with the WES610N unit connected to your Internet-capable HDTV or other video streaming device. Works GREAT with my iPhone and iPad as well as multiple laptops. Set the SSID, configure your WPA2-Personal encryption key and away you go! Allows for parental controls which work! 2 options: school nights and weekends, select devices to apply restrictions to. Includes Dynamic DNS option if you have a DynDNS account as I do. Overall, this is a very good wireless router for a small to mid-size home. I use it with the WES610N and E2500 gigabit switch and have very good covereage in my two-story 2500 sq. ft. cabin.

Cons: Does not have wall-mount option or brackets molded in to mount on screws.

Cons: not reliable at all

Overall Review: I had to replace the first unit due to it dropping the internet connection of every connected device ever 5-10 minutes. This was happening on both wired and wireless connections. The second unit would not let me log into the admin page. It would accept the default password then sit at a loading screen indefinetly. Worst linksys product I've ever had and will not be purchasing anotherone after this. for the price this should have been a way better product.

Manufacturer Response:
Hi, Sorry to hear about your experience with the product. We have posted your review in the forums and a user replied with some suggestions that you can try. Here's the link: http://community.linksys.com/t5/Social-Media-Support/Newegg-com-EA3500-Stay-Away-from-this-router/td-p/621286 Thanks, Linksys Support http://support.linkys.com
Anonymous
Ownership: 1 week to 1 month
Verified Owner
Satisfied.4/27/2012 5:08:57 PM

Pros: My family and I get constantly fast connections. After upgrading from a linksys wireless G router to an n150 router I definitely noticed a speed difference with this N750 and its simultaneous bands. Setup is NOT difficult unless you refuse to follow the included instructions. I have 3 desktops with wireless N connected 2 of which can get constant 450mb link speeds and easy 2MB/s downloads. I can get signal across the street through my brick house in the garage and still get 2 bars on my windows based laptops and Ipad, cellphone and everything. I love the fact that I can renew and configure the router without being at home to renew IP and run speed tests for example. I love the network storage that I can use from outside the network to get my work files. Its a great product that is EASY to install like every consumer based wireless router out there. Port forwarding is easy with gaming and I have more than 10 devices connected all day. The reviews about this product that bash it are ridiculous. Although now that wireless AC routers are becoming more dependable I would not buy this router unless you wanted to save some money. Performance increases with newer products still create a good market for $150+ products that have a definite advantage. I did this review since over a year later and all of these negative reviews of people that don't want to use the included disc and complain about setup. Or complain about their difficult and somewhat technical configurations not working should not be reviewing. If you want a full feature set and bigger range flash the router with TOMATO and stop complaining.

Cons: With it's cloud based configuration I'm an unable to get more than 5 devices onto the device priority list with multimedia. So I just have my 360, ps3, brothers laptop, gaming pc, and ipad.

Overall Review: A good buy when on sale but this barely outdated product will always be a big upgrade from your old wireless G or select-able band wireless N products. Best of both worlds and not a big investment. Remember to look into more current products with possible external antenna's if you want a "Performance" router. Until then if your not comfortable with configuring a router, have your networking friend help. That's to all you "old people" ;-)