FREE SHIPPING
Sold and shipped by: AOOLIVE US AOOLIVE US

Purchases from these Sellers are generally covered under our Newegg Marketplace Guarantee.
Sold and shipped by: AOOLIVE USContact Seller
Ships from United States.
Price Alert
Add To List 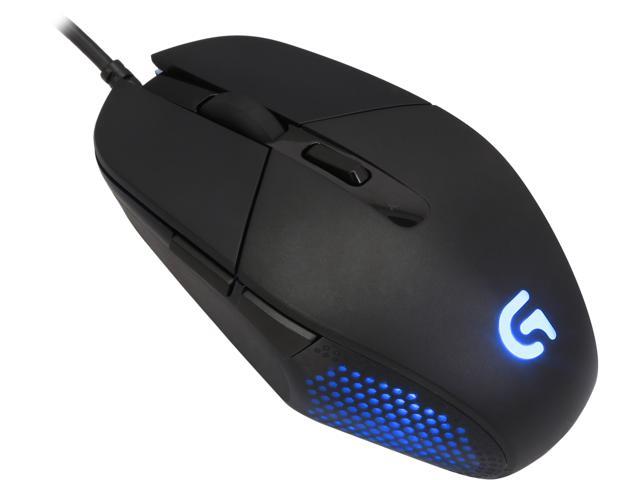 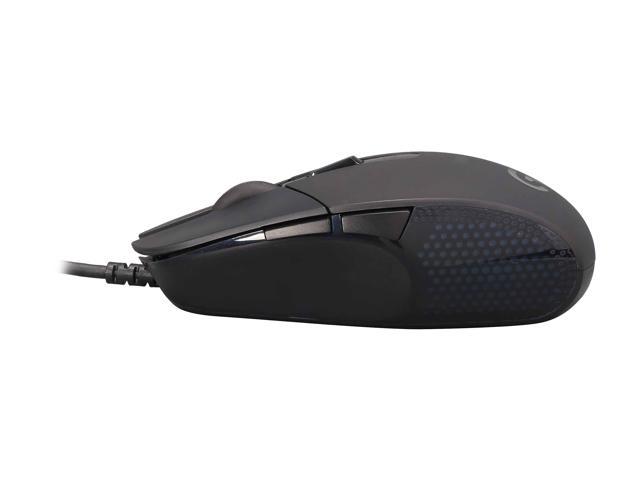 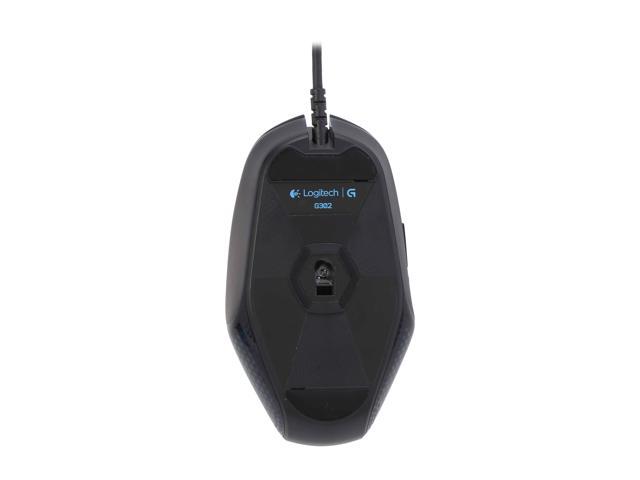 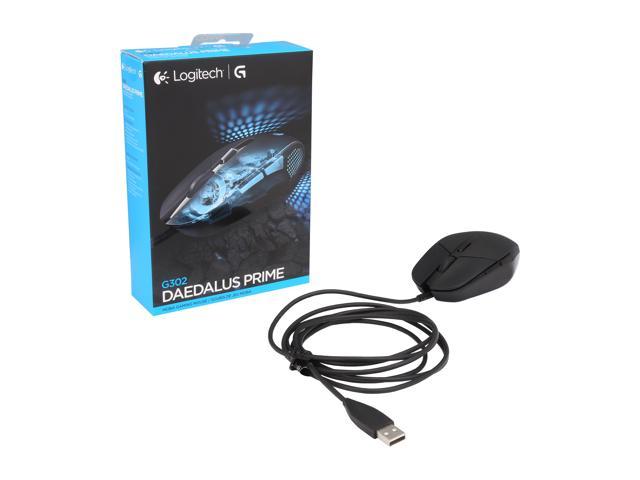 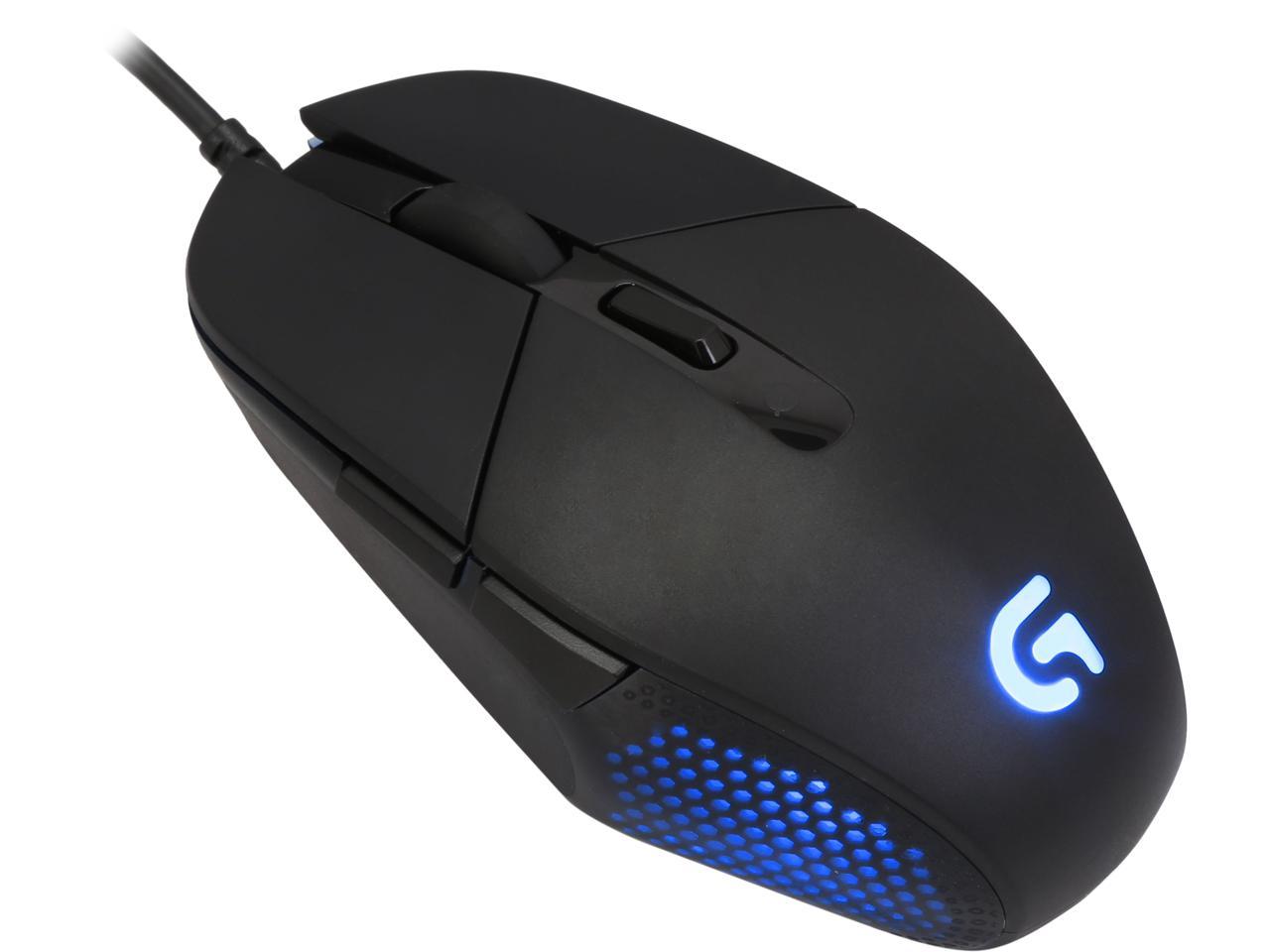 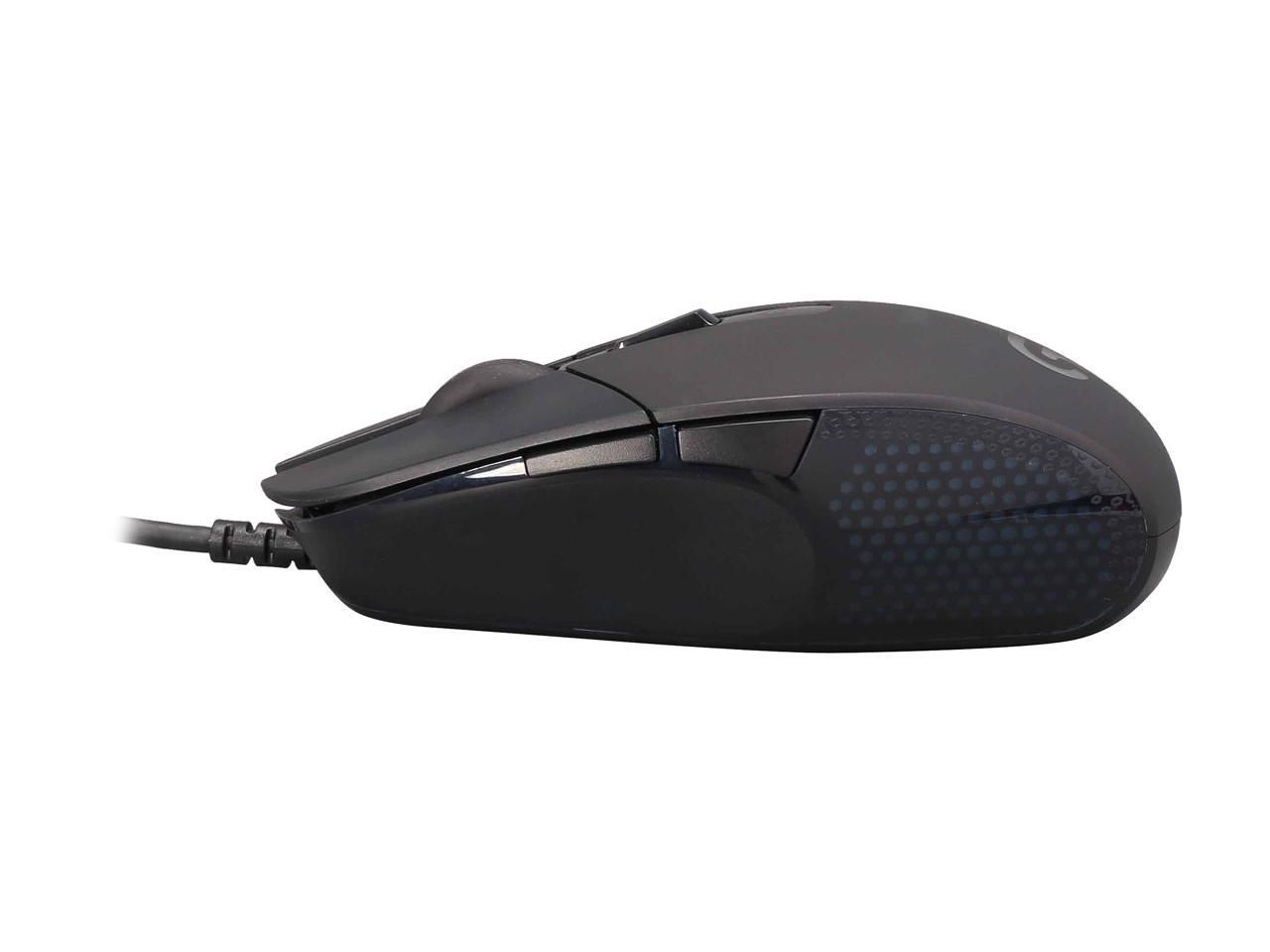 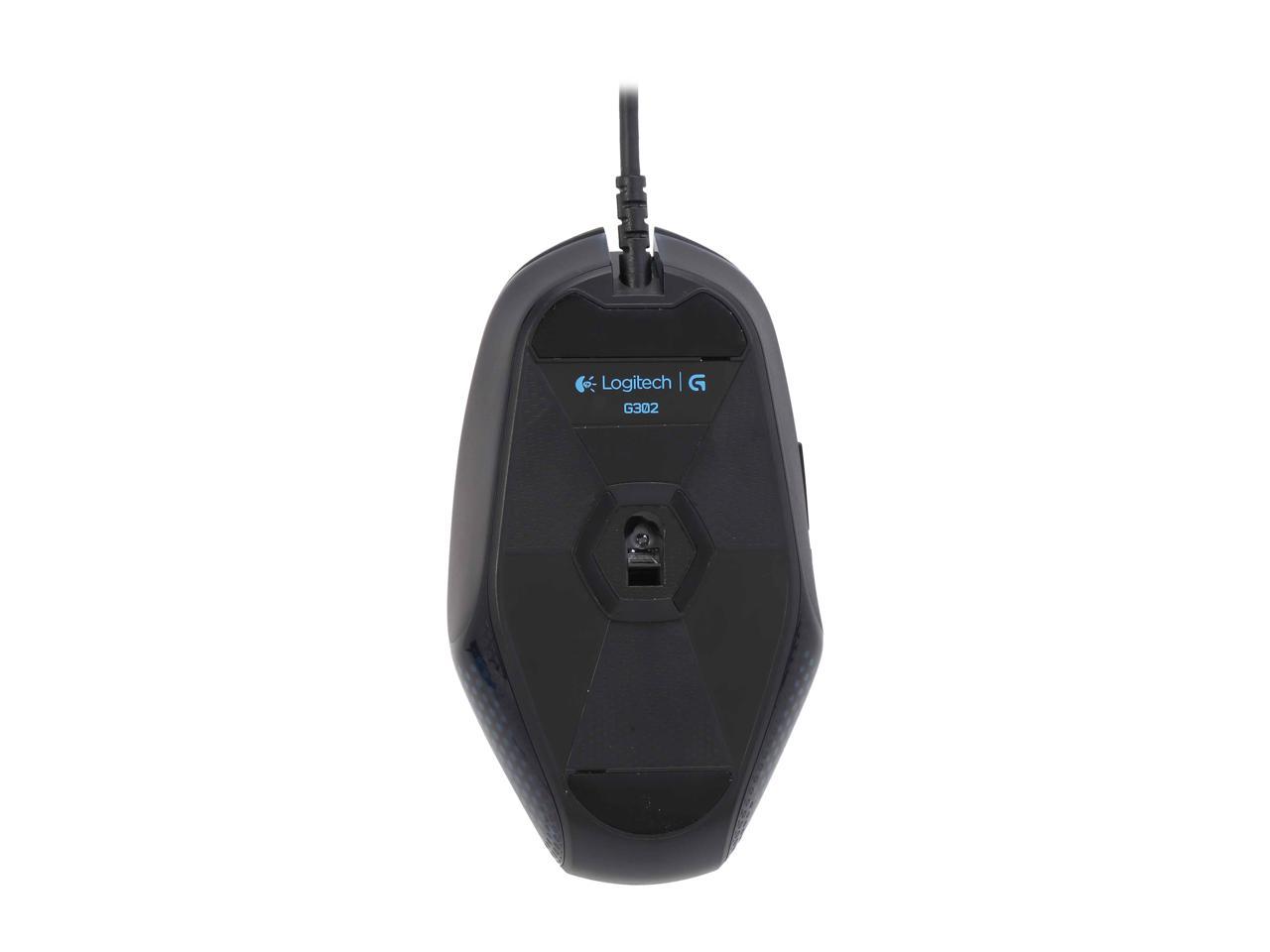 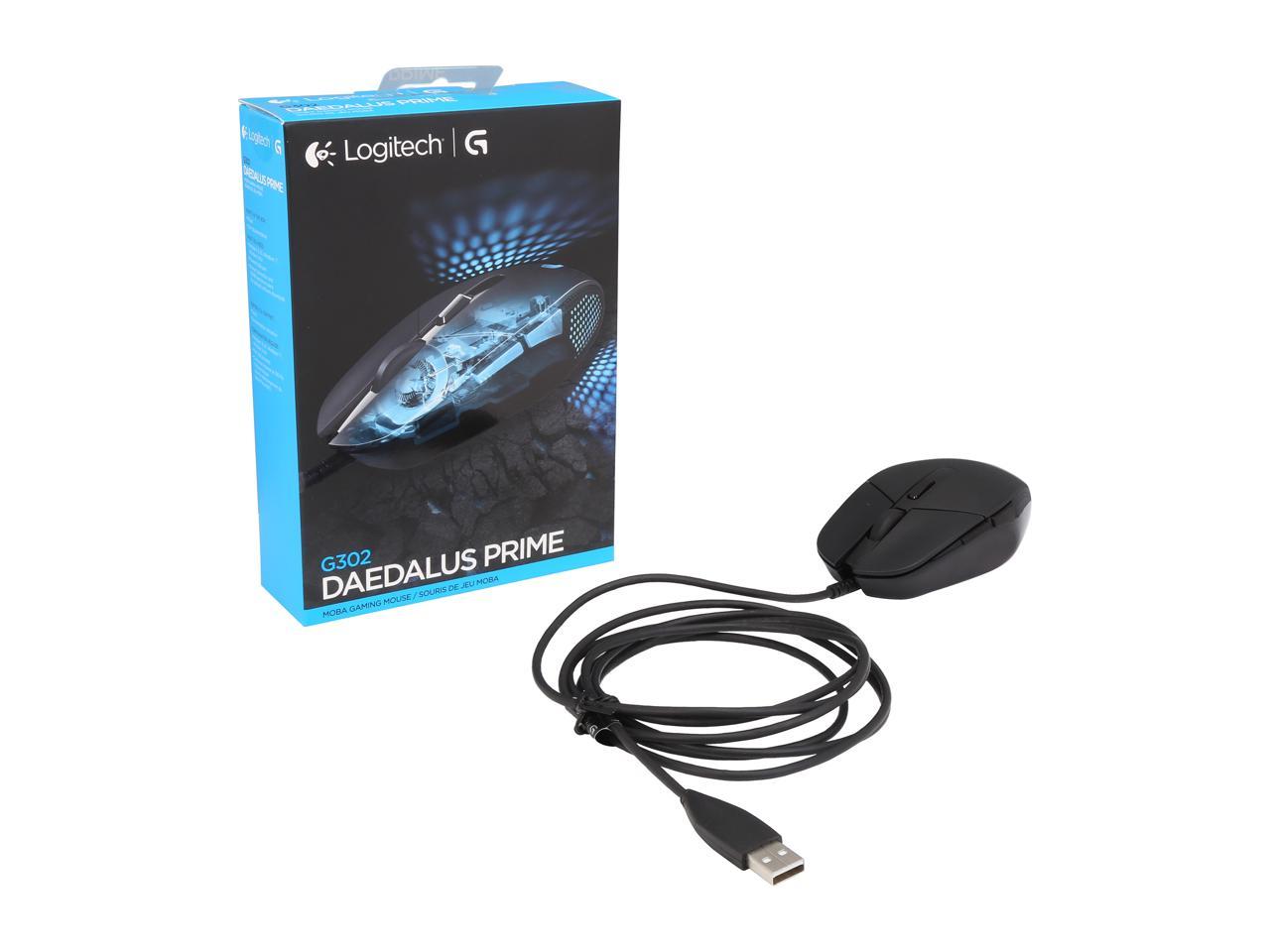 The G302 Daedalus Prime Moba is equipped with a 4000 DPI Delta Zero optical sensor to provide gaming-grade accuracy tracking for the long haul to domination. And the on-the-fly DPI button lets you easily shift through up to four DPI settings, thus giving you the right level of tracking precision for whichever game you are playing. It offers six programmable buttons that can be customized to fit your style of game play while featuring metal spring tensioning system for improved button response and feel. The high-quality switches with a lifespan of 20 million clicks ensure superior reliability and durability. Compact and lightweight, the G302 Daedalus Prime Moba is shaped to a new level of comfort. Accuracy and durability for the highest levels Customize to fit your style of game play

Achieve great results with the default configuration straight out of the box. Or, set up one-button triggers for actions that typically require digging into menus. Put push-to-talk communications in easier reach. Temporarily down-shift DPI for sniping. Reassign any game command or multi-command macro to any one of six programmable buttons with Logitech Gaming Software. Better control of how you game

Make the right moves in any game situation. Shift through up to 4 DPI settings, from pixel-precise targeting (240 DPI) to lightning-fast maneuvers (up to 4000 DPI). The lightweight gaming mouse features ultra-durable switches which feature a long lifespan of 20 million clicks for long-lasting performance. The super low friction feet enable you to be comfortable no matter how long competition lasts. Daedalus Prime has been optimized for fingertip and claw grips to ensure the maximum possible comfort. Overall Review: I go through mice like women go through clothes and this is currently the best mouse on the market for people who use claw grip or fingertip grip. It is a medium-small sized mouse that fits small handed people like me. The overall shape of the mouse is like a tall diamond with very round edges. The front side of the diamond is much longer than the back. Because it's a diamond, it is good for both left and right hand people, but not only that. It has good balance so you don't feel like you're "tipping over" with other right hand mice. The front sides of the mouse curves in downwards just slightly. I much prefer this than having absolute flat sides. The sensor is placed in the middle of the mouse, which is optimal for me. If you've used Logitech software recently, it is pretty much the same as before, but it's not a bad thing. Dpi settings can go from 400 to 4000. You can set up to a maximum of 5 intervals in between any number in between. Extremely flexible. With lighting on the mouse, you cannot change the color so it stays at blue. The blue lights pulsates from really slow or really fast depending how you want to set it. Pretty much all buttons are programmable. Lastly, there is a feature in the software that "heat maps" which buttons you press the most. You have to turn it on manually though, but it's a fun feature. Other things to note: The stiff rubber cord makes the mouse being just short of perfect. If you have a small desk with a lot of objects on it, the rubber cord might actually get in the way. I guess on the plus side you don't expect the cord to break or bend. I get different drag frictions on different mouse pads, so I'm not sure which mouse pad will work best for you. The click itself is not stiff and it's very easy to press. Other mices sometimes make me work too hard to click, but not this one. I can click it all day. Great mouse and great quality from Logitech.

Pros: For being my first gaming mouse it sure does the job! The mouse I had prior was just some cheap Chinese 'gaming' mouse, then I saw this mouse was on sale so I picked it up I've had it for over 5 months so far and no complaints.

Cons: The only issue I had with this mouse was it seemed kinda bulky at first, after awhile I got used to it.

Cons: - Cable is cheap and gets in the way. - The shape is weird and you get cramps after a while. - Definitively not a palm grip mouse.

Overall Review: Everyone keeps saying Razer products are cheap and break after a while but seriously, Logitech is just the same. I'm starting to believe that all companies are just garbage at quality control. This Logitech mouse started double clicking on me this morning and I'm so disappointed right now. Since my Logitech mx510 (I had this mouse for 5+ years), I've never owned a mouse that wouldn't break after less than one year of constant use. I've owned Roccat, Logitech, Cooler Master, Razer, Corsair ... and YES, I take really good care of my products. I won't ever buy a Logitech product again. They lost a consumer. I'll just go back to the Deathadder, at least when it works, it works marvelously. Anyway I'm getting used to switching gear every 6+ months or so. I wouldn't recommend this mouse. Logitech is just not the same company as it used to be and it shows in the quality of their product.

Cons: The shape took some time getting used to. Definitely a claw grip is recommended for larger hands, but a palm grip is definitely possible if your hands are smaller.

Overall Review: I primarily play Dota 2, which is the original reason I bought this mouse. I have an affinity towards "ambidextrous" shaped mice like the Sensei (which I used previously), so this was a natural mouse to try next. I have been thoroughly impressed. The switch from a laser to optical sensor also has been great. Highly recommend if you can get over/used to it's odd shape.

Pros: The mouse is very light and click-pressure is relatively low. HAOZTEC also had very good communication and customer service when I needed to contact them.

Cons: The mouse is not one of those ones that have 9 extra buttons, but that's not what I was looking for in this mouse anyway.

Cons: - Very odd and uncomfortable shape / ergonomics - Only 6 buttons - Blue is the only LED color available

Overall Review: After using a CM Storm Spawn for a couple of years, I decided I wanted something with a bit more customization in the DPI department. I am also a claw-grip style user, so I needed something that would fit the bill for that as I believe comfort in a gaming mouse is key! After doing some research and asking around on tech forums, I settled on the Logitech G302. That is, until I decided to return it (I'll explain later). To start, this mouse definitely has a quality feel and solid build construction. The metal spring loaded switches they boast on the packaging feel very nice and have an outstanding feedback. The sensor also tracks very well, and is rated as one of the best optical sensors on the market. I found the software to be very simple to use and intuitive, allowing you to individually set the DPI to whatever you want (up to five individual steps), as well as set the function of each individual button. There are only 6 programmable buttons, which may be a bit low by todays standards, but this was enough for me as I am not into MMO's or games that could benefit from macros. All buttons felt of a high quality and provided a good feedback. With all of the positive talk, why would I return this mouse and only give it 3-stars? The shape and design of it. To start, it is pretty small and I believe it may only suit someone with smaller hands, not to mention, the shape is just overall strange. It bulges out to points in the middle, creating somewhat of a diamond shape which I found to be very unnatural feeling. I thought I would get used to it but after a week of non-stop use, it felt as foreign as when I first took it out of the box. I noticed some negative talk about the shape online but thought I would give it a try myself, as I generally don't like to exclusively go on someone elses word. Unfortunately in this case, the criticism of the shape is dead on. Ultimately, I decided to return this mouse and continue my search for the successor to my CM Storm Spawn. Logitech really needs to do a bit more market research before they implement such an odd shape for a mouse. Given their stellar history, it was a very strange move for them. It's a shame with the G302, as Logitech has built a high quality mouse with top end components here. I can only recommend this mouse if you have smaller hands (or are E.T. or some other space alien) but even then, the shape is just something you'll have to try for yourself!

Pros: price best sensor on the market extremely responsive buttons lightweight feels pretty good braided cables are a PITA, so I was happy when I found out this one wasn't braided.

Cons: Going from the G500 to this felt weird at first, but I finally got used to it, and I'm happy with it now. The shape may not be comfortably for some(smaller hands), even I find it kind of awkward feeling.

Overall Review: I got tired of the giant G500 after 3 years and wanted something that I could claw grip, and after having to cancel mt order for a CM Storm Spawn(the store couldn't get their hands on one), I decided to go with this mouse, and I'm pretty pleased so far.

Pros: - First off, this sensor is by down right INCREDIBLE. The input latency on a high refresh rate monitor (120 hz) is REALLY noticeable from my older mouse. - The L/R clicks and other buttons on the mouse feedback is flawless. - 1 to 5 DPI modes that are completely customizable which I think is amazing. - Scroll wheel is just right. Not too easy and not too heavy to scroll with just enough feedback on fingertip. - I am personally a fingertip gripper but I could see this being comfortable for a claw grip as well but maybe not palm grippers.

Overall Review: - Amazing quality care in packaging -- FOR ONCE a company didn't tangle the cord and actually put some effort in! - Cool pulsing LED glow (Customizable in software) AND on that note great software in general -- clean cut GUI.