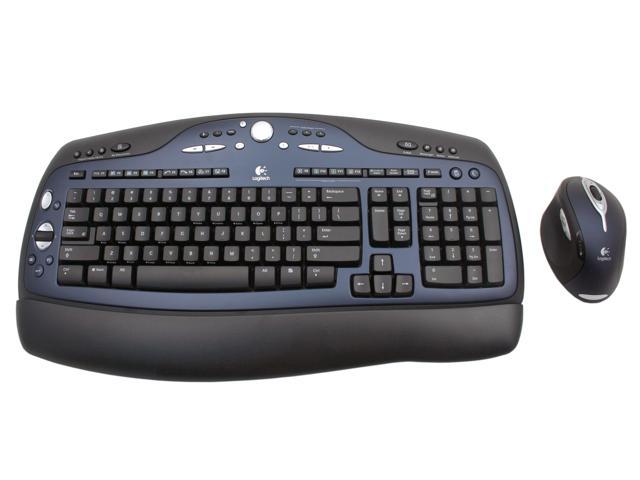 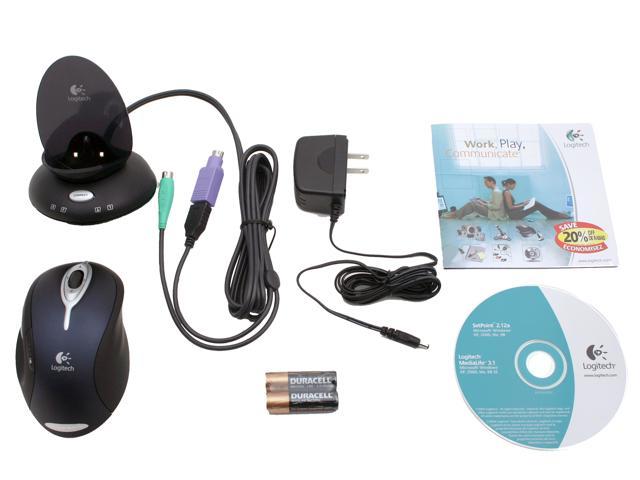 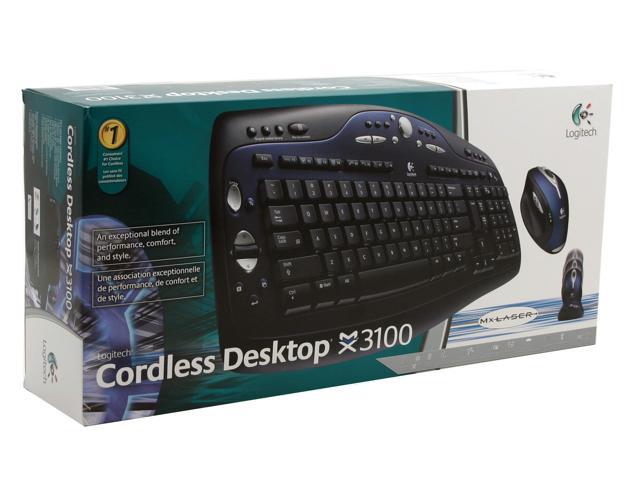 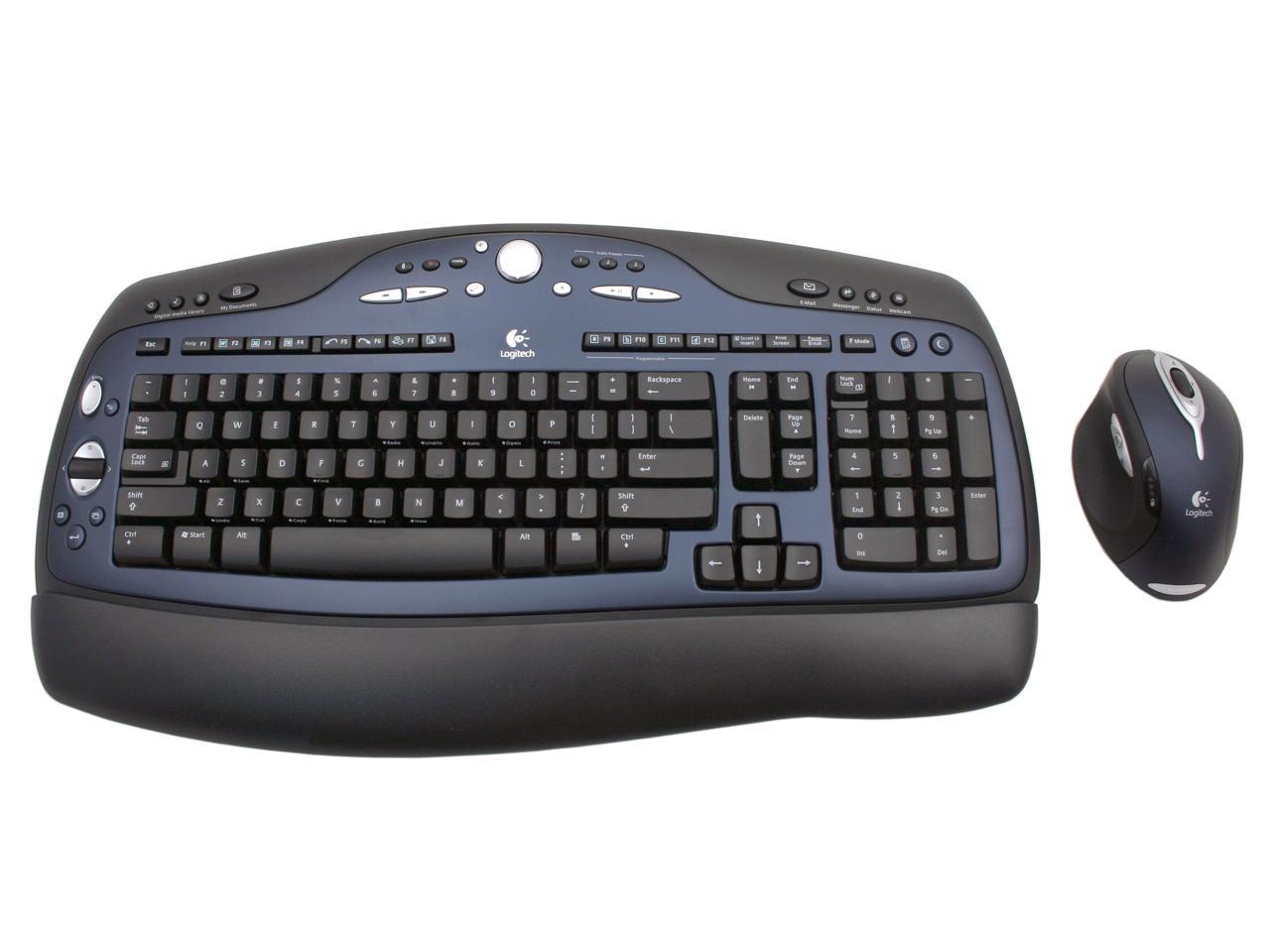 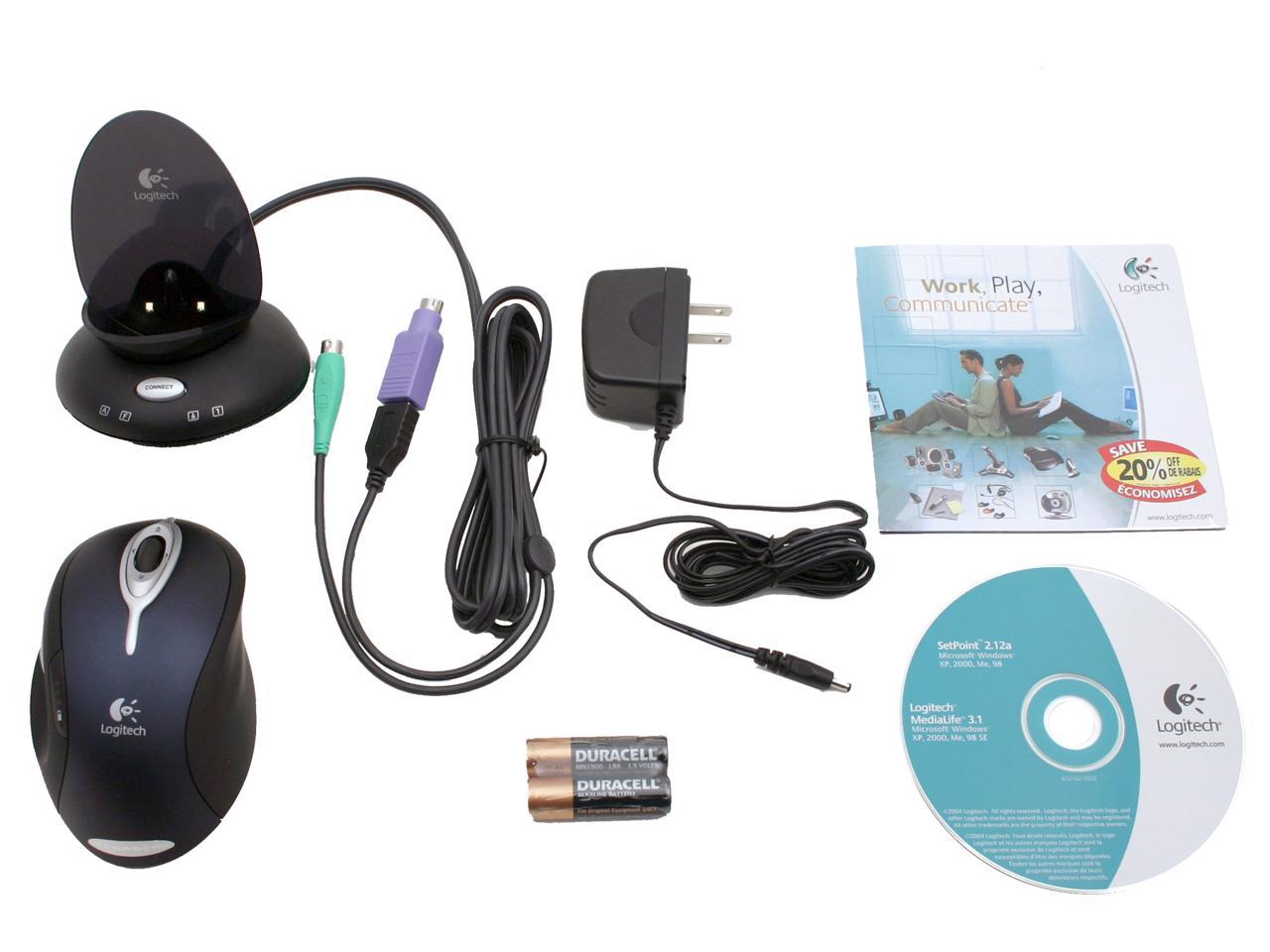 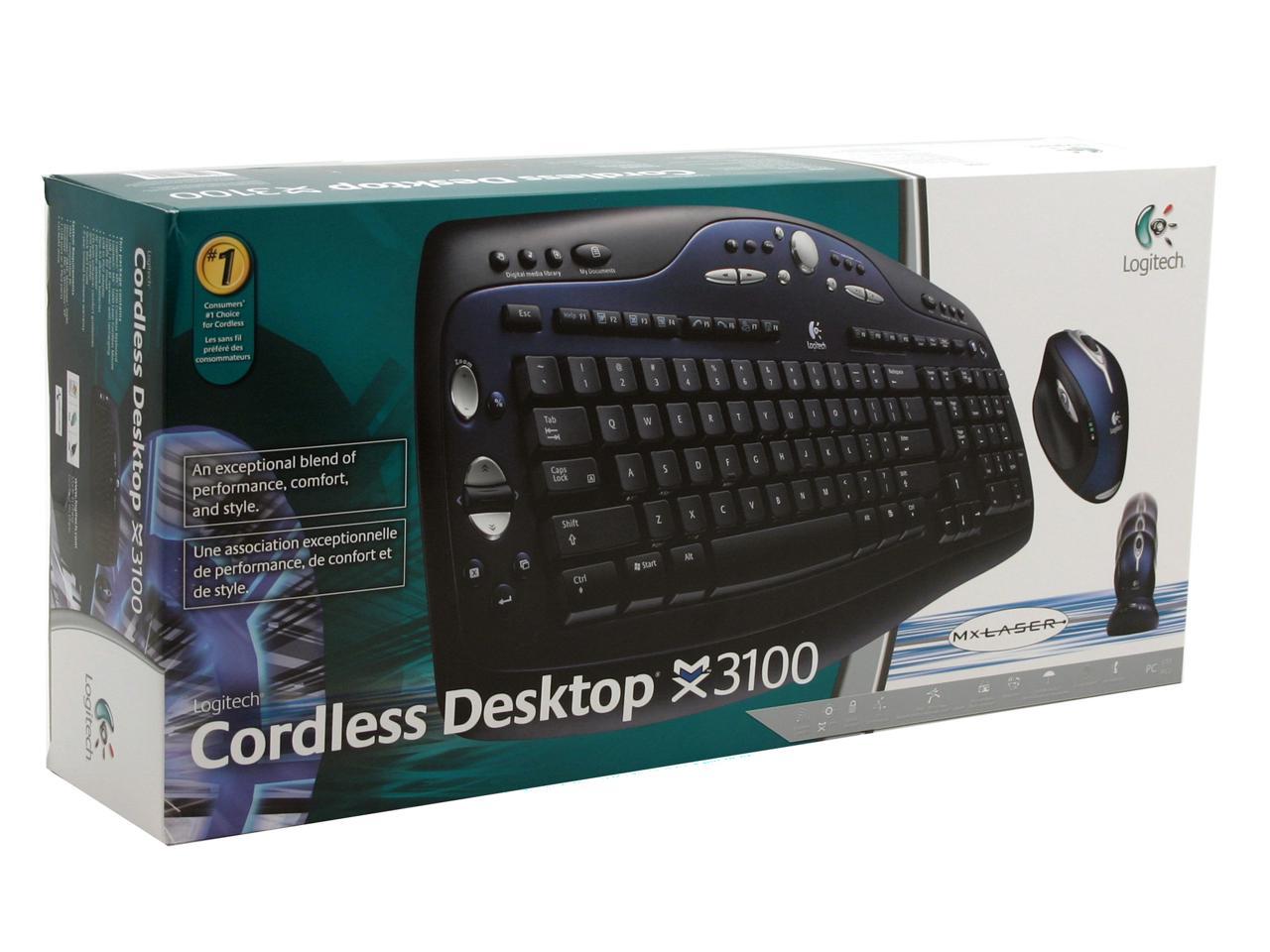 (113) Write a Review
OUT OF STOCK.
Specs
Reviews

Pros: Both the keyboard and mouse are very feature rich. The included setpoint software allows you to customize any function key to a variety of tasks, including keystroke combinations - very handy for graphics editing. The included MX1000 laser mouse is superb, both in tracking and in battery life.

Cons: If you are anything above an average computer user, this keyboard/mouse combination will annoy the living daylights out of you. It seems that the wireless reciever is very weak in bandwidth; whether this is due to the MX1000 eating up bandwidth is up for speculation. I am a pretty fast typist and I experienced noticable lag between when I made the keystroke and when the keyboard actually registered the letter. This got so bad to the point that I could be typing a whole word before it appeared on the screen. Secondly, the keyboard often balks when making multiple keystorkes, for instance, alt + tab, or ctrl + c. Third: gaming is completely out of the question. When moving the mouse, the reciever often simply refuses to recognize that a key has been pressed or released. Also worth noting is that the reciever dropped keystrokes when I moved the keyboard more than about 2 1/2 feet away from it.

Overall Review: I bought this keyboard/mouse largely due to the positive reivews on this site. However, I have been extremely dissapointed at it's performance. Why a nearly $100 piece of equipment can fail at completing basic tasks such as 2-key combinations is simply beyond me. It is also worth noting that my 4 year old logitech wireless keyboard has neither keystroke lag nor problems with multiple keystrokes. I've tried using the PS/2 adapter, as well as the usb connector, both with no success. Finally, after uninstalling all the software and removing the product, I found that my computer would no longer recognize my old keyboard and mouse. I was forced to find a usb mouse, uninstall the logitech keyboard and mouse drivers, and let Windows fall back on its default drivers. For a keyboard/mouse combo with such a rich feature set, the performance of the MX3100 is a major dissapointment. I recommend that you buy the MX1000 mouse and stick with a wired keyboard.

Pros: I read a number of reviews prior to purchasing the Logitech MX3100. The mouse was always rated as the best ever and I certainly agree. A number of folks didn't like the keyboard because of the size of the special function keys. I think the entire keyboard is excellent. I have been hacking since 1978 but have always used standard keyboards and Micxxxxxx mice. This logitech wireless keyboard is definately superior to anything I have ever owned. The keys are very smooth and I love the special function keys. I did purchased a Micxxxxxx Elite last week from a local office supply and returned it the next day. The setup didn't work with my new Pentium D computer and there were no instructions or easy way to get answers. I love Micxxxxxx but they need to put a little more information in the box. Also, the Micxxxxxx keyboard didn't seem as sturdy as this Logitech. My wife if really particular about keyboards and she really loves this one. Don't hesitate to buy this keyboard.

Cons: The set up was a snap. I have a new Dell XPS400 Pentium D Desktop which only comes with USB ports for everything. No PS2, standard monitor, or parrellel ports. The Logitech instructions said to use the USB only with a laptop and to use the PS2 with all desktops. Obviously, I used the USB with my new desktop and it worked perfectly. I wouldn't really call this a Con but I know some folks are really confused when the instructions are incorrect.

Overall Review: This is my first experience with Newegg and I can't say enough to express how satisfied I am with the experience. I ordered standard 3-day UPS on a Monday evening and the delivery came on Thursday. The keyboard combo was well packaged and arrived in perfect shape. I recieved emails the following 2 days after the order letting me know that the keyboard would be delivered on Thurday. Today is Thursday and it was on my porch when I arrived home. I will definately use Newegg for all my needs from now on.

Comments: Don't bother with the PS/2 connections. My keyboard stopped responding after 3 days of use. I switched to using the USB connection only, and no more problems. The mouse is boss. Excellent for games. The keyboard is quite functional, however I wish the audio presets worked with winamp.

Pros: You can't best this keyboard/mouse combo. Though tricky to setup initially with my windows x64, once windows installed and I loaded the x64 drivers from Logitech, it was smooth go from then on. The receiver/transmitter is on my side, away from from my desk, yet no lags, hesitation. This is as good as it gets. For over a month now I have not recharged the battery, still going like the energizer bunny.

Overall Review: Get one.

Pros: Great Combo! This is my first Laser Mouse. Can't figure out why I waited so long to buy one. My last combo was the MX700, which doesn't even compare to the MX3100. I've used Logitech cordless mice since the beginning of cordless mice. I'll never go back to corded but I should never hesitate to move forward. The Keyboard is quiet and has a very soft touch compared to all of the other Logitech Cordless keyboards I’ve used. I love the Calculator Key, Word Key, Excel Key, PowerPoint Key and the programmable keys. Many of the other Keys I’ll need to get use to, but so far so good!

Cons: None the I have come across yet!

Overall Review: I will continue to use Logitech Products because I have been happy with them in the past.

Pros: The mouse is superb and tracks beautiflly--I've never used a better mouse. All of the hotkeys on the keyboard are completely customizable. Keys have a great feeling. The colors look awesome.

Cons: There is one minor issue with the keyboard--during heavy word processing, there is an extmemely slight, but noticable lag. However, it is nothing that would have any major effect. I type about 90-100 WPM and I can BARELY notice it.

Overall Review: A lot of people complain about the weight of the mouse. I absolutley love it. Obviously, it is heavier than corded mice, but you will love it once you take the time to get used to it. Also, it is a heck of a lot lighter than mouse other cordless mice. Feel safe using this for gaming. I have used it with great satisfaction on CS: Source, F.E.A.R., and BF2. Some other users have also written that the keyboard and mouse don't at the same time (like if you were using it in an FPS). This happened to me at first too, but I just reconnected the keyboard and now it works flawlessly. I seriously recommend this product. I would pay the cost, even without the rebate. And as always, Newegg rocks. Ordered this baby on Wed. night and received it Fri. afternoon.

Cons: * MAJOR problems with the keyboard. Can't type while moving the mouse, noticeable lag even with normal typing. * Gaming IMPOSSIBLE. * Internal rechargeable battery on the mouse, not user accessible.

Overall Review: I have tried everything to resolve the keyboard issues. Already RMAed it once, not resolved. Tried different system, differed operating systems, USB and PS/2. I think Logitech had a bad batch, please rethink buying this until more information is available.

Pros: Design for both the keyboard and mouse is slim, sleek, and comfortable. Typing on the keyboard is quiet and smooth. The extra functions and buttons on the keyboard may seem overbearing at first site, but every button is very useful and extremely customizable. As for the mouse, the MX Laser 1000, what else can I say that hasn't already been said. It deserves all the praise it's received and more.

Cons: If I can thing of one, I'll get back to you.