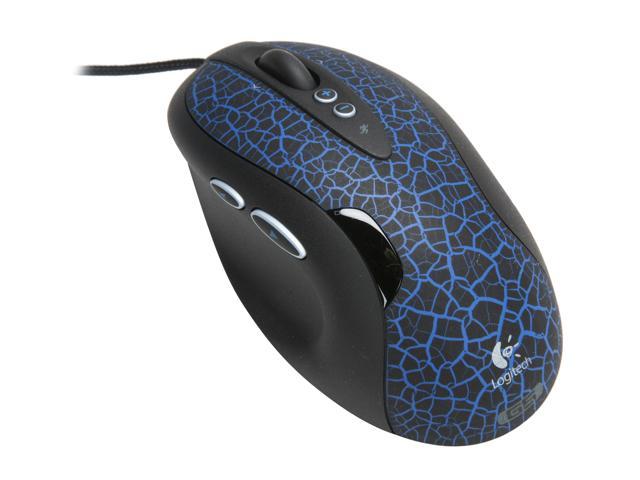 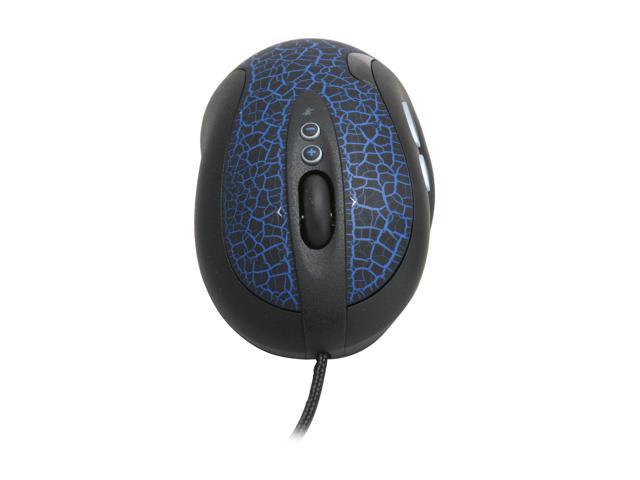 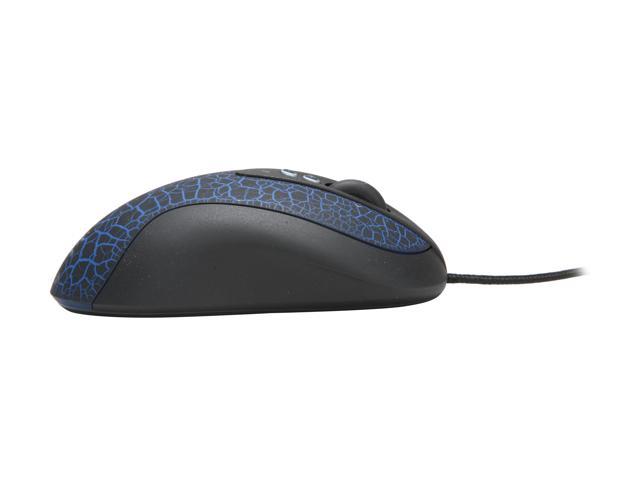 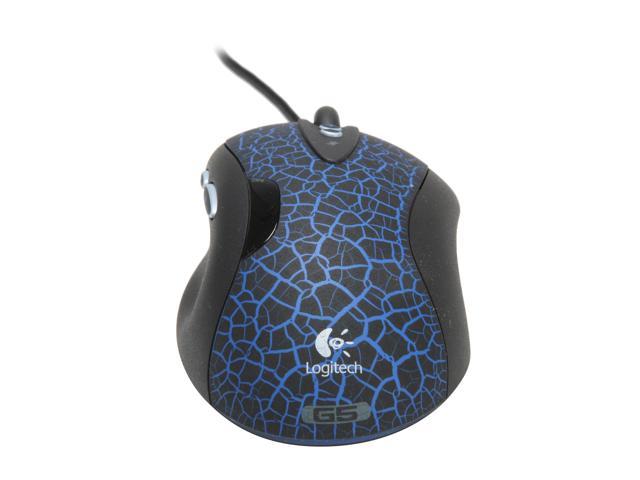 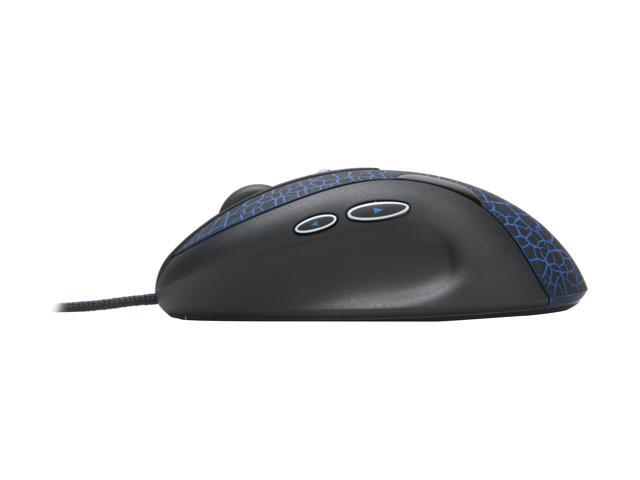 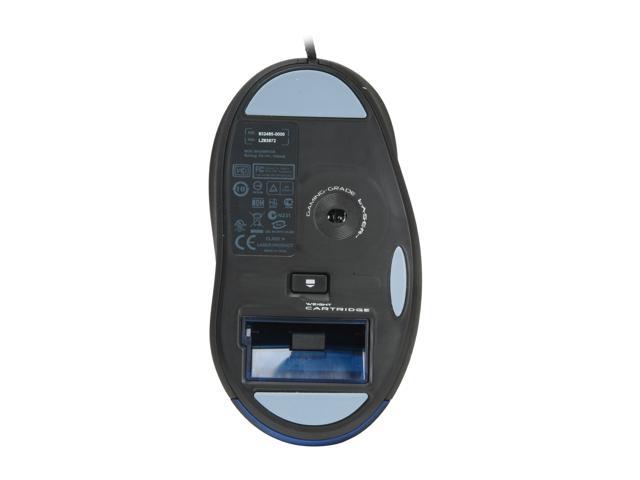 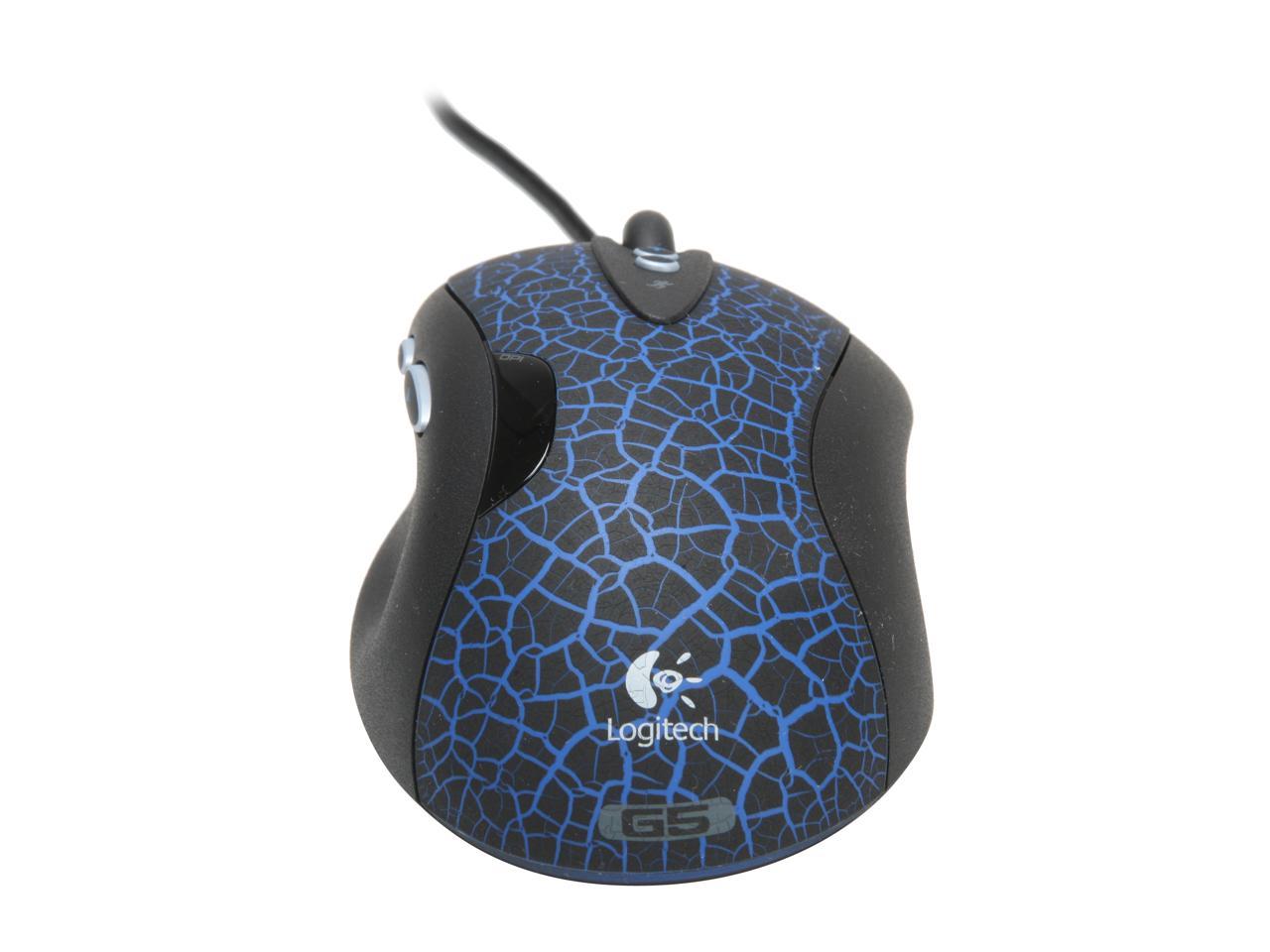 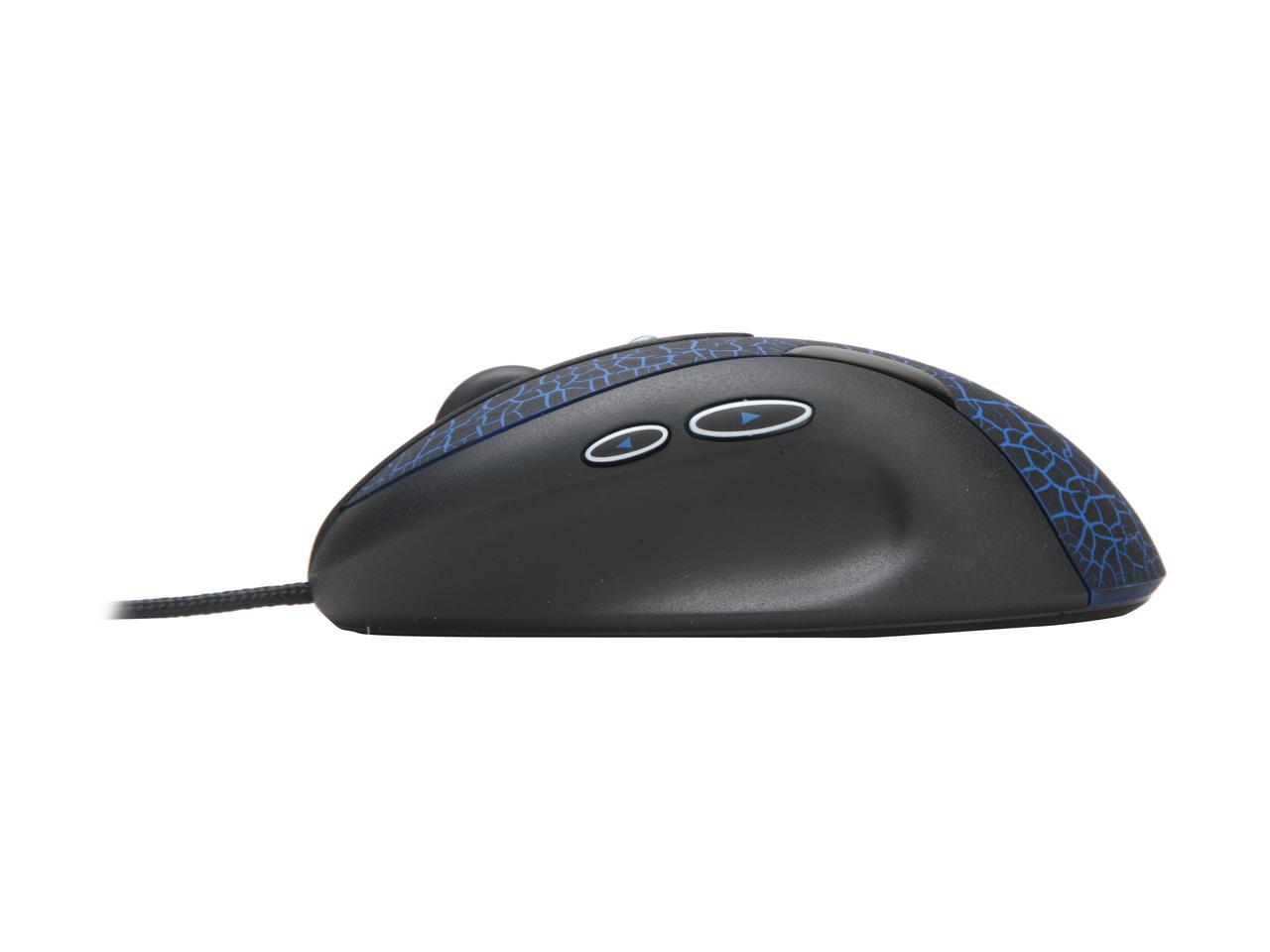 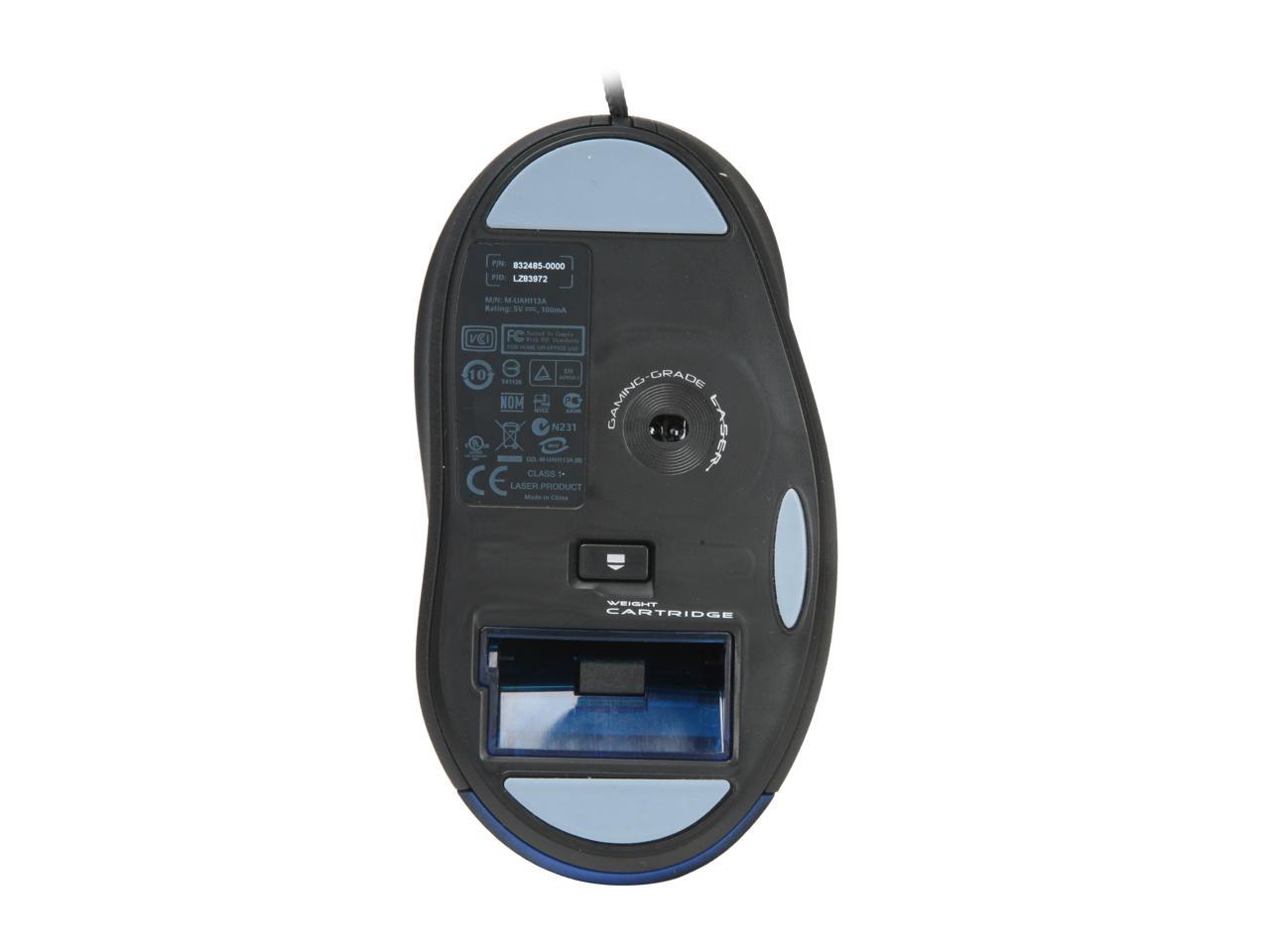 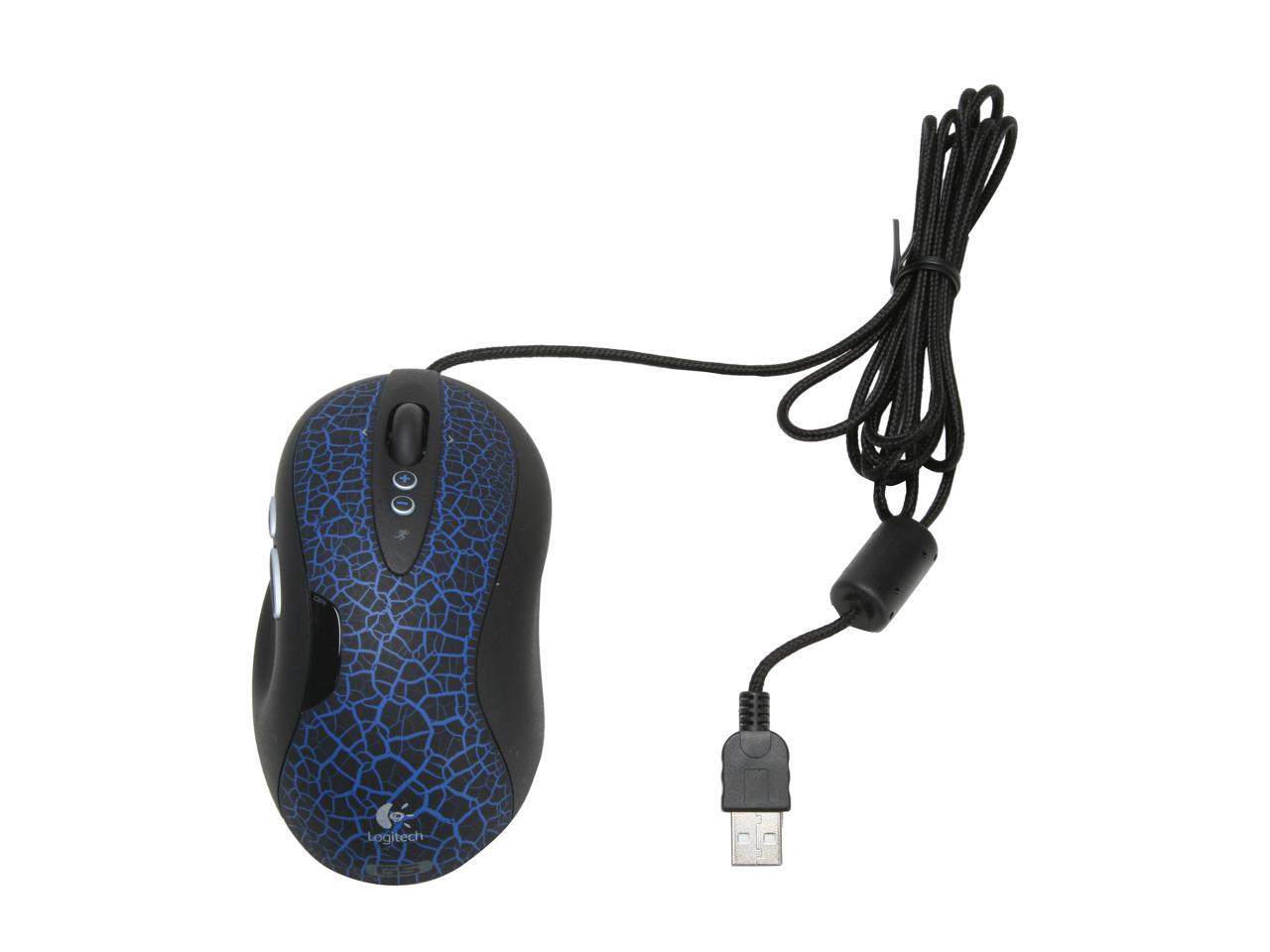 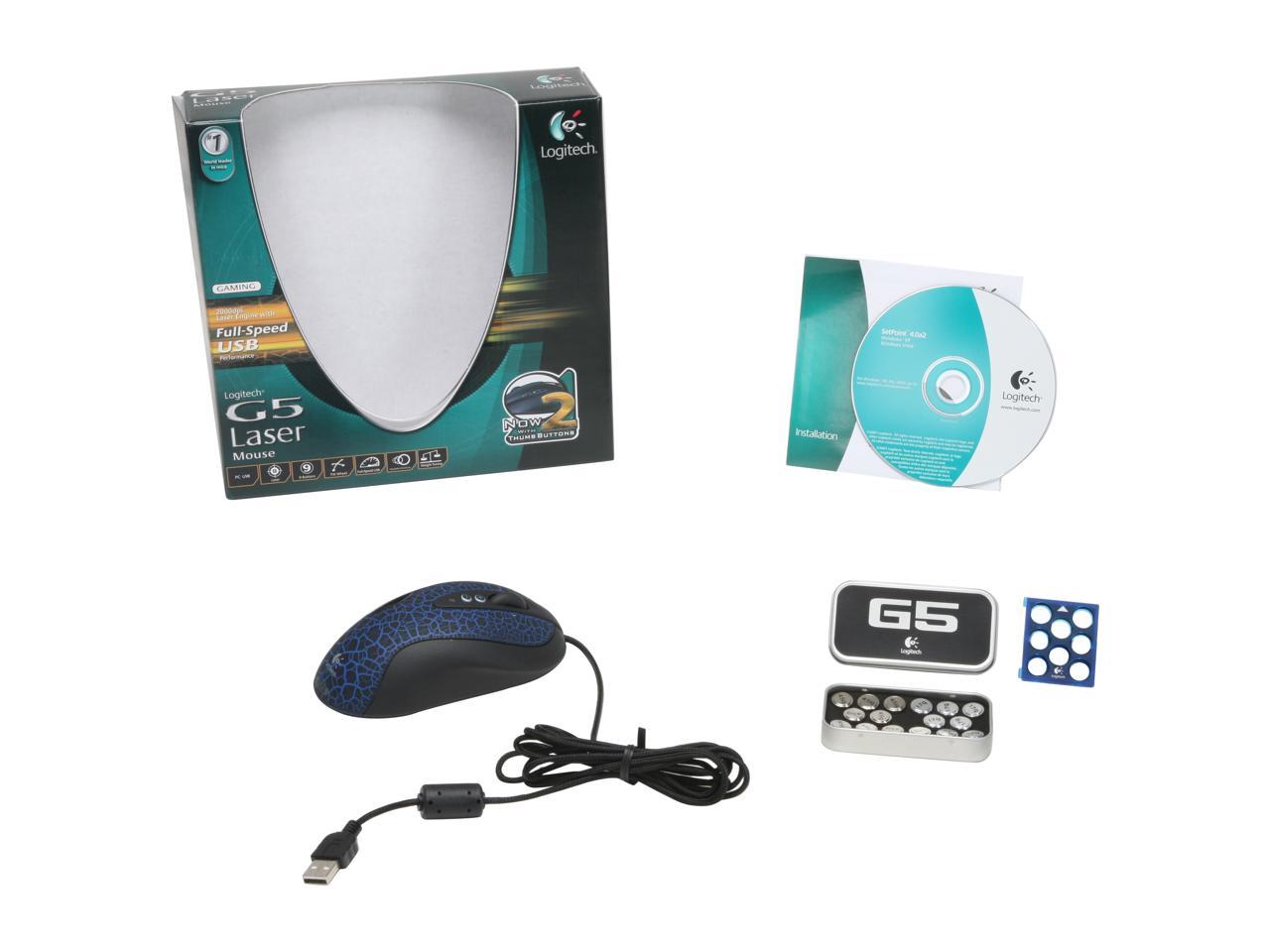 (1,079) Write a Review
OUT OF STOCK.
Overview
Specs
Reviews
The Logitech G5 Laser Mouse looks great with its blue crackle graphics, and gives you the competitive edge with its gaming-grade design. The 36-gram adjustable weight cartridge allows you to adjust mouse handling until it’s perfect for your unique gaming style. Polytetrafluoroethylene (PTFE) gaming feet provide the ultra-smooth glide you want during fast maneuvers.
The G5 features a laser engine that’s adjustable from 400 dpi to 800 dpi to 2000 dpi with 6.4 Mp/s image processing, and delivers blazing speed and instant acceleration with an astounding 1000 USB report-per-second bi-directional connection.
Logitech’s SetPoint software allows you to customize your mouse with advanced features such as game detection and in-game adjustable sensitivity, including independent x- and y-axis settings. The grip offers natural right-hand position for firm control and fatigue-free mousing. No matter what your gaming style, you’re sure to find winning control with the G5!

Learn more about the Logitech G5

Pros: I have been playing computer games since the mid '80s and in my wasted life i cannot recommend another mouse. In a perfect world Logitech would listen to what their clients say, and refuse to end production of a formula that works. refuse to cheapen it or change it in any way. this was the perfect mouse. this mouse has had the cord shortened 4 times by myself, gingerly resoldering the wires. i have worn the feet nearly completely off. i know i will have to retire it, and i know i will never find another.

Cons: making me fall in love with a transient object is unkind. denying me an equivalent replacement unforgivable.

Pros: Awesome mouse! High resolution, 2000dpi, sensitivity switching on the fly, and it's got a friggin laserbeam in it! I liked the look of the mouse, but I suppose that is up to the individual. This will look awesome next to my Logitech G11 keyboard. Added side button was a must before I purchased the G5. Overall fit and feel is the same as the MX500 that I had before it. Weights might be sort of gimmicky, but I appreciate the ability to customize the experience in any way possible. Software works good once you figure it out. (Download the newest version don't use the included CD, might be the source of some peoples problems?)

Cons: It is tedious to set up at first, getting the sensitivity to work the way you want it exactly. Buttons have a slightly tacky feel instead of the MX5XX models "clicky" feel. Blue and black color scheme is not just paint, it is an actual texture which resembles the top of cinnamon rolls you pop in the oven lol! This might turn some people off, but it is fine with me. Does NOT work in PS/2 port, at least on my machine. Windows doesn't even recognize it until you plug it into USB. Braided cable seems like an unnecessary touch. It's as if a string is coming out of your mouse instead of a cord. I would have preferred the traditional black cable, but black braided chord is OK.

Overall Review: If you like the MX500 or the MX518 this mouse will feel very similar (except for the surface texture.) If you like customization you will like this mouse. If your setup is blue and black like mine is going to be, this will fit right in aesthetically. Make sure you download the newest version of the software for this mouse and toss the included disk. I haven't had most of the problems other reviewers have so far, the weights work fine if you place them in the holder securely, the texture of the surface really isn't all that bad, and my hands are the right size for the mouse and it is exactly the same dimensions as the MX5xx series mice. Make sure you tweak the settings to your liking before getting fed up and returning it.

Pros: It's kinda like they took what was wrong with the original G5, and fixed it. I liked my old G5, but used the mx518 over it because of the extra thumb button, and functional mouse wheel button. Now the new G5 has an extra thumb button and a better mouse wheel. Pros over old G5: -Second thumb button. -Better mouse wheel, you can push in the mouse wheel and not accidentally hit a tilt button now. -Sensitivity buttons no longer stick. (This could have just been my mouse) -New texture on mouse provides a better grip.

Cons: A few minor things, I'm not sure if these are problems with all of them, or just mine. -Second thumb button doesn't "click" when you push it, and it's a little sticky. It seems to work fine though. -The mouse wheel is an improvement, but still not perfect. You will occasionally accidentally hit a tilt button while trying to push the mouse wheel in occasionally, but as long as you press it the right way it will rarely happen. -I find the weight system to be an unnecessary gimmick, but that's just my opinion. -A little pricey, but worth it. If you're on a budget, go with the mx518.

Overall Review: Overall, it's an upgrade over the mx518, and original G5. I give it 5 stars, it's the best corded logitech mouse imo.

Pros: Very accurrate with my Thunder8 mousepad. No problems turning off the two side buttons which are in the way as I'm left handed and inadvertantly hit them from time to time. Customized weight system may be a gimmick to some, but I like the option.

Cons: This is the second G5 I've owned; the first was one with just one side button. I had to replace it because it kept 'disconnecting' in winXP. Now this one is doing the same thing only not as often (yet), but after only 5 months ownership, the first one started this behaviour after a year or so. It's the mouse, not the ports, else this would have happened sooner (i.e. as soon as I replaced the original, but it didn't, this second one worked perfectly for five months). Also all my other usb devices are not experiencing any problems whatsoever. And the original mouse has been tested on the other three computers in the house, does the same on all. It's totally random, it can work fine for hours, other days, it'll disconnect every few minutes. I won't say I won't buy another Logitech mouse, but I won't be buying another G5.

Overall Review: This problem might be due to 'overuse' as the computer it's connected to sees between 10-80 hours a week of gaming (3 gamers in the family). But this is the ONLY mouse that I've owned that's experienced this 'disconnect' issue and I've been a gamer since before Doom. I wish Logitech still made the MX1000, that lasted me three YEARS before the buttons finally died (I'm a hardcore FPS player and I was really surprised it lasted that long)

Pros: Upgrading from a MX518 that was a bit worn, this one seems already worth it. Quality is overall significantly nicer, buttons have a much better feel. Tracking is noticeably better going from regular optical to laser. Adjustable weight is also a nice luxury, and the implementation works alright. Awesome paintjob, gives good traction

Cons: -Middle click is a little weird, deeper than the 518, slightly less responsive -Side scrolling, I don't like it on my mice, but that is just my preference

Overall Review: I have mine set up with almost maxed out weights, with most of the weight distributed towards the bottom rear, shifting the center of gravity closer to my wrist, which seems to be comfortable

Pros: I don't know what kind of shrunken shriveled little hands the other reviewers have, but this thing is not the behemoth they are making it out to be. You'd think they were munchkins trying to palm a basketball with their reviews. The size is just right and I'm of an average to small hand size. The feel is the other gripe these people keep talking about but i couldn't picture wanting something smooth to keep clutched in my palm for hours at a time. The frog like skin makes it much easier to hold and not feel tormented by.

Cons: none so far, i'll update after a few long nights.

Pros: Everything. Awesome design that has been used in the MX500, MX518, and G7. The shell makes it look pretty cool (like it's made from lightning or something). On-the-fly sensitivity buttons, both Forward and Back side buttons (a con on the G7), custom weight-settings (I have all the 4.5g weights in, and it feels about the same weight as the G7), and corded (so you don't have to deal with batteries, something I didn't like about the G7). SetPoint software allows customization of buttons, which I really like. The pads on the bottom won't wear off over time (my MX500's glued-on pads wore off after 2 years of use); these pads are built into the actual mouse, not glued on, so they won't fall off; and yet they still allow good movement over mousepads and other materials.

Cons: Two very small things. The scroll wheel feels worn out. I liked the G7 because when you scrolled, it was very clear when you scrolled (it made a soft but audible click). The G5's wheel feels rubbery, so it's slightly more difficult to scroll with, and there is no clear clicking sound. A very small con, but it was something I liked from the MX500 and G7. Second, the shell (with the lightning pattern) feels really dry against my hand and is a little awkward to get used to. I liked the smooth plastic texture of the MX500 and the G7 and wish I could get the older version of the G5 that was smooth like that. It's not really a con, but more of a personal preference. Only other thing I could say is that Newegg dropped it to free shipping the day after I bought it, but that was my fault for not being patient; just bad timing.

Overall Review: One annoyance (only in Windows XP, not Vista) is that when I open up certain apps (some games like CSS, or programs like Photoshop), the mouse sensitivity shoots from 800dpi to 2000dpi. I used to have to hit the on-the-fly sensitivity buttons to change it back (which is why those buttons got worn out on my G7), but I realized that SetPoint has a setting to "recognize game mode" or something like that, under the Mouse settings. Disable that setting, and it won't happen anymore. Other than that, Logitech once again makes a top-quality product. This is my 10th product I bought from them; mice, keyboards, headsets, speakers, you name it, I've bought it. They really know how to make good products. Got this mouse with a rebate to knock the price down, and Newegg had great shipping (as always). If you like Logitech products and think the G9 is still too expensive, get this mouse.