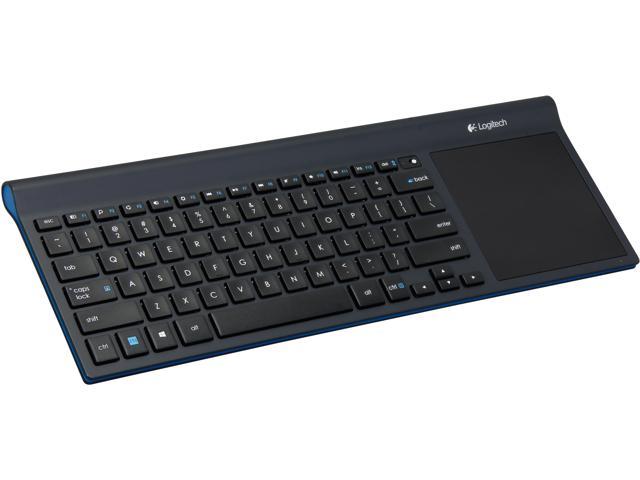 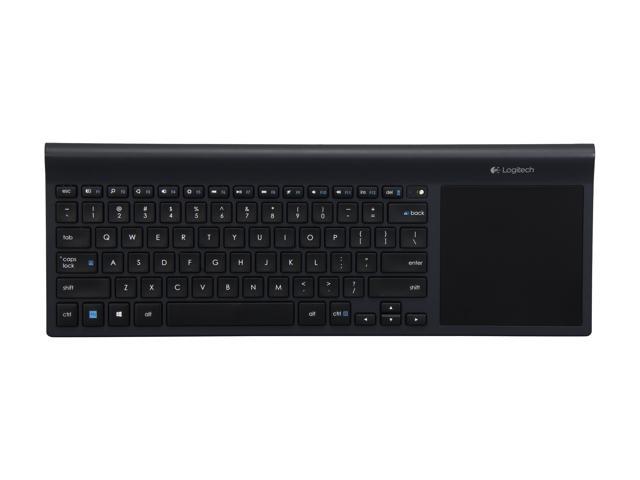 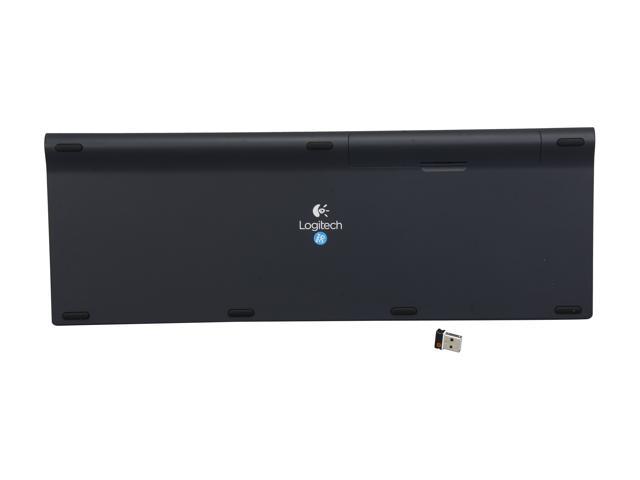 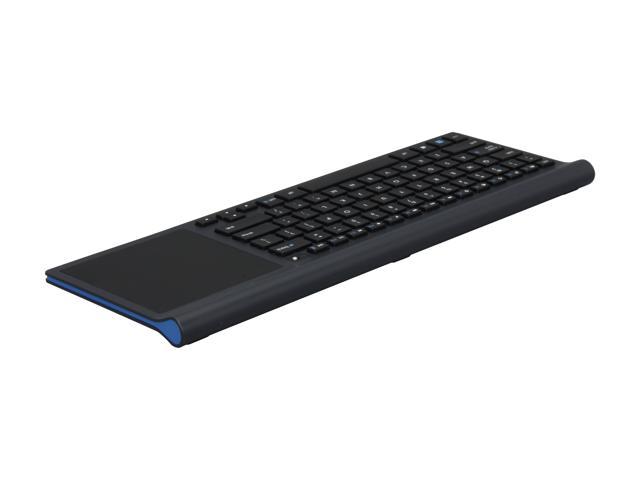 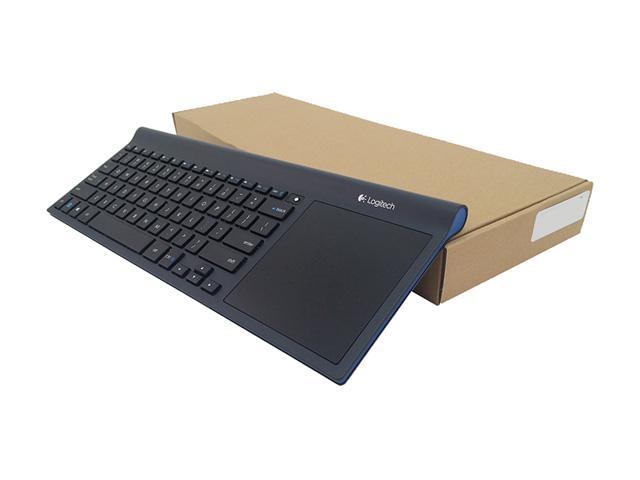 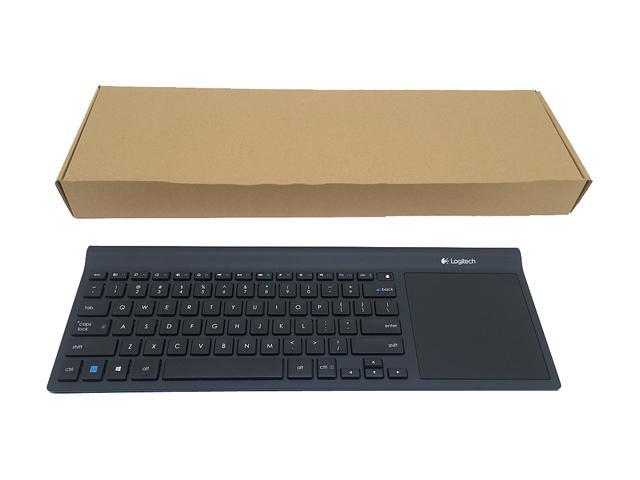 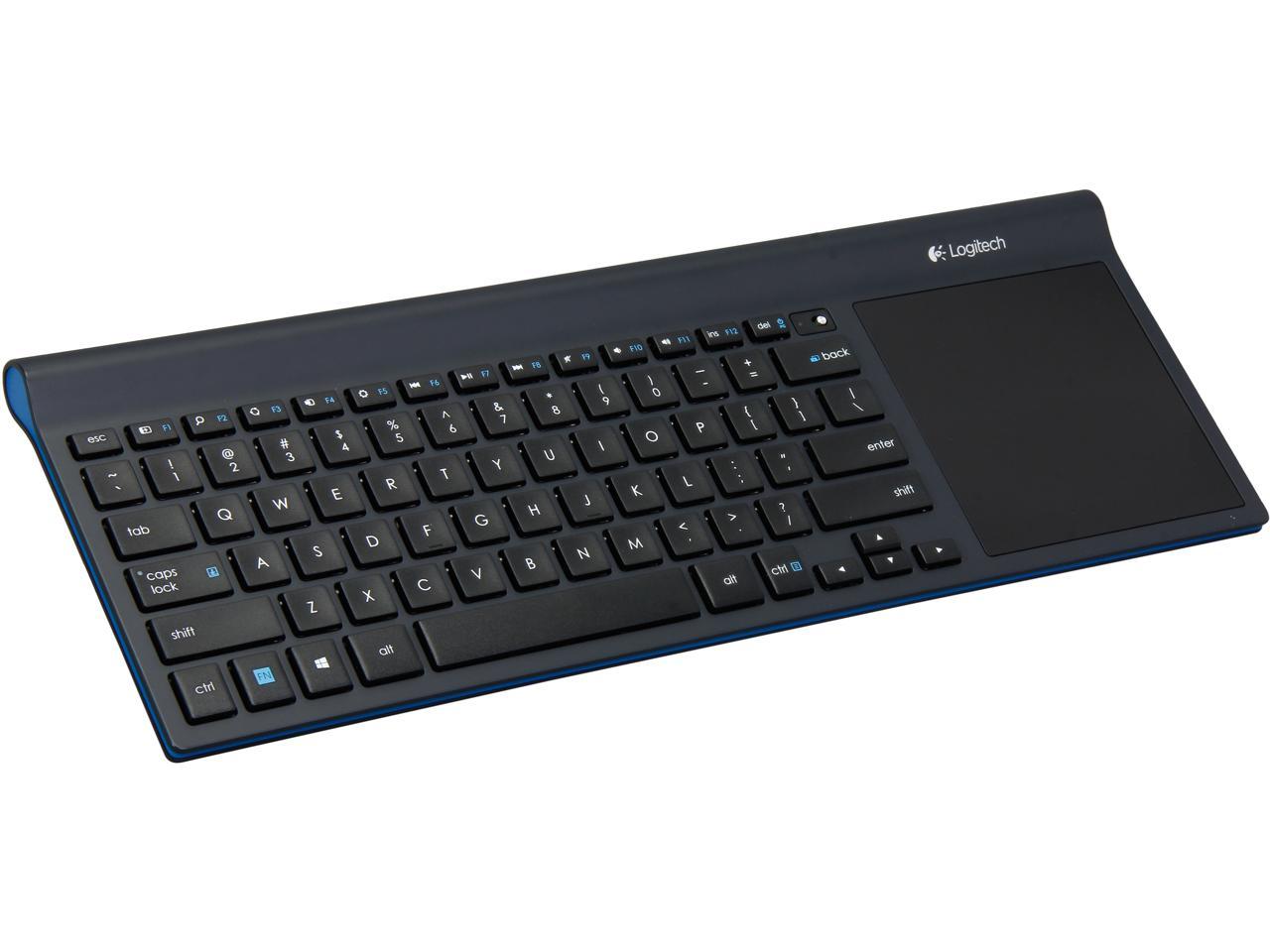 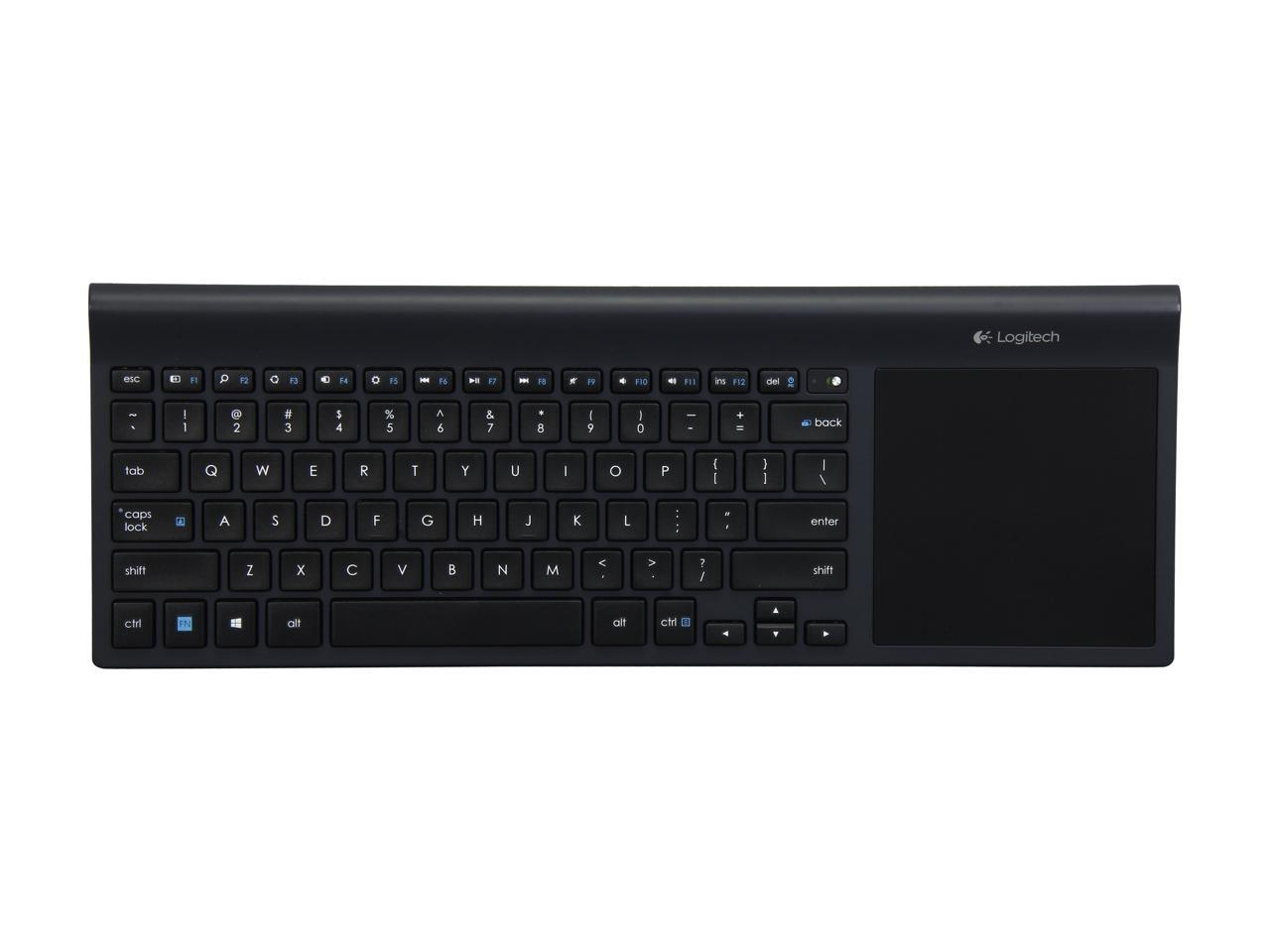 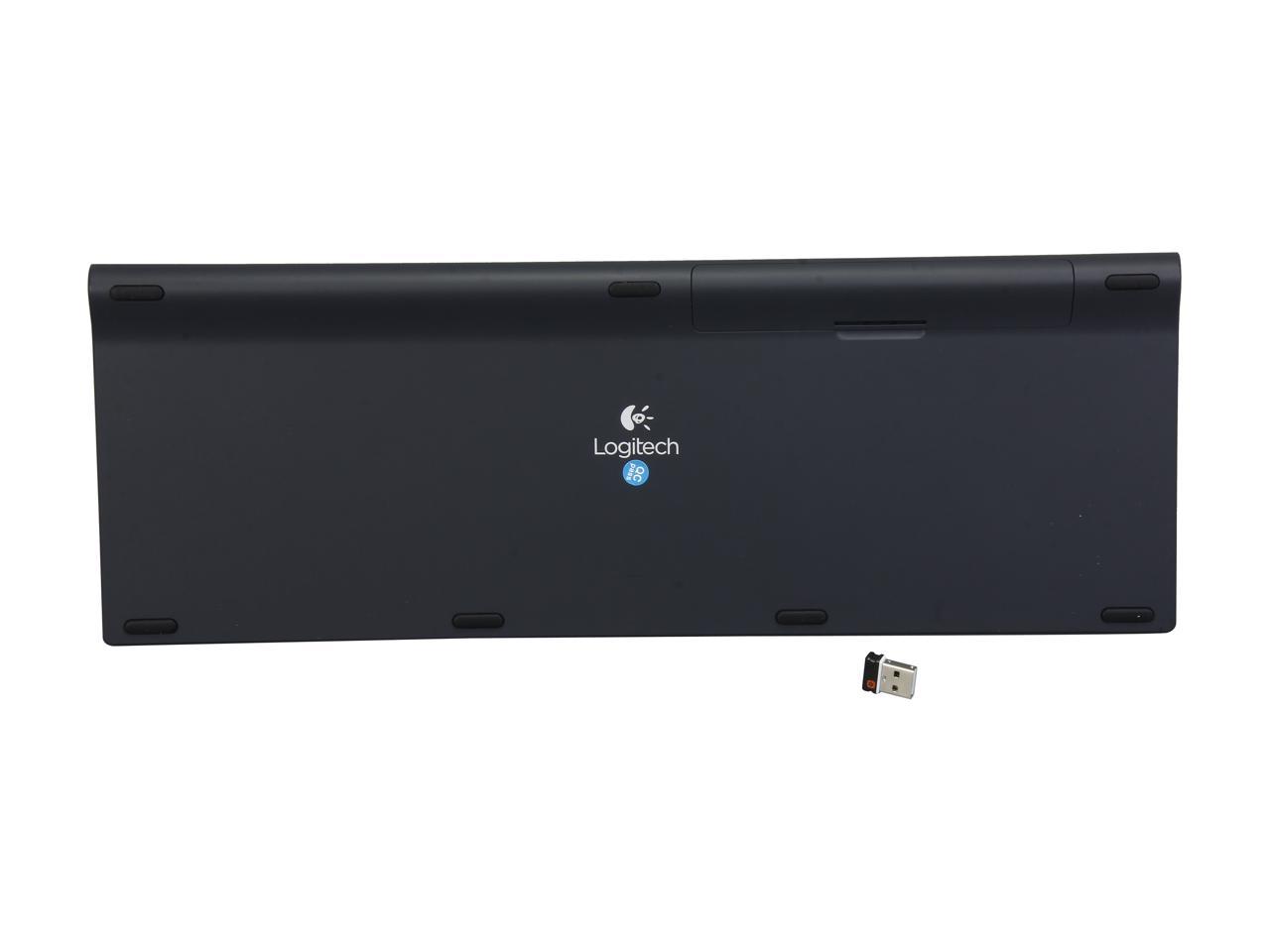 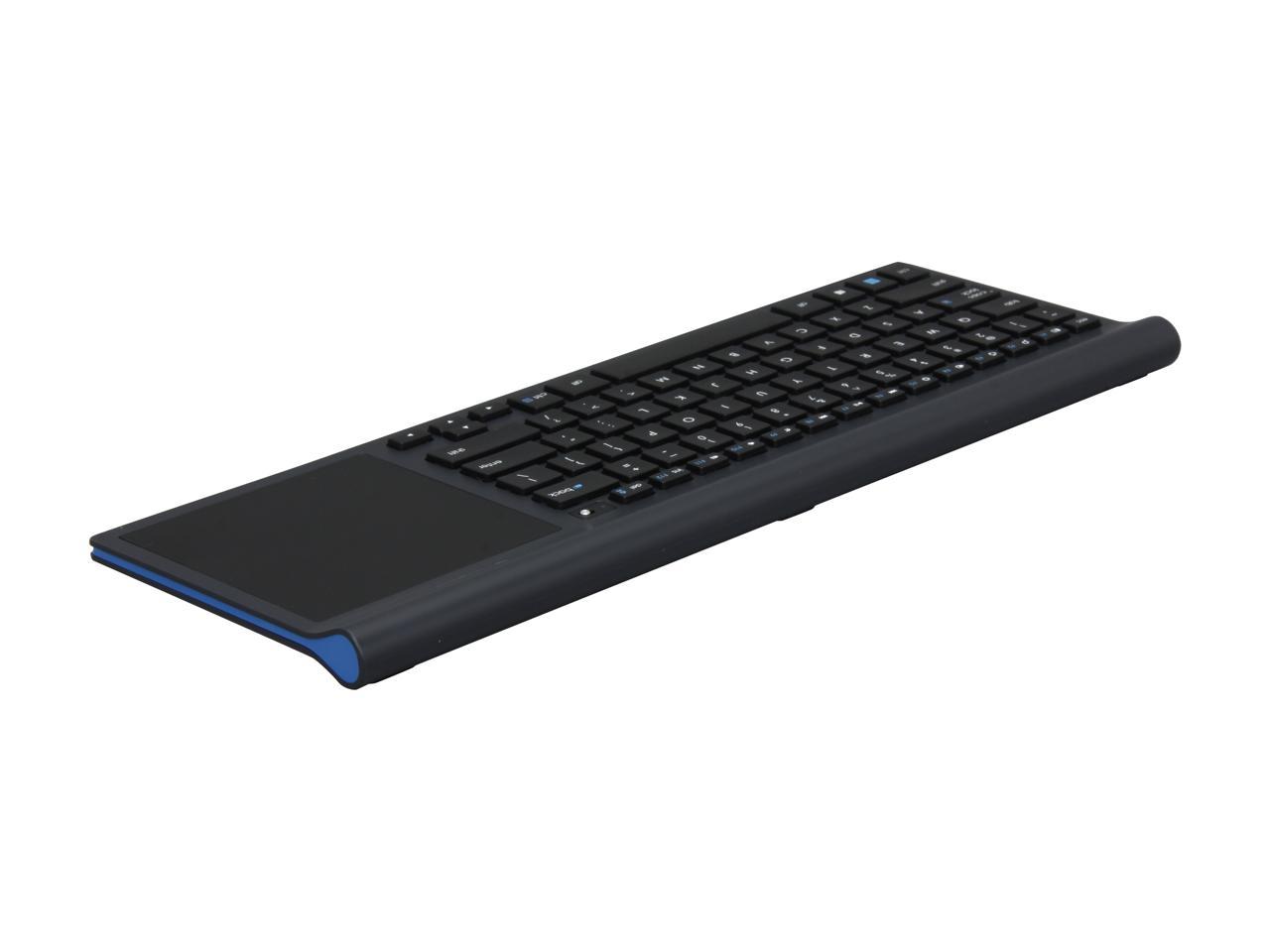 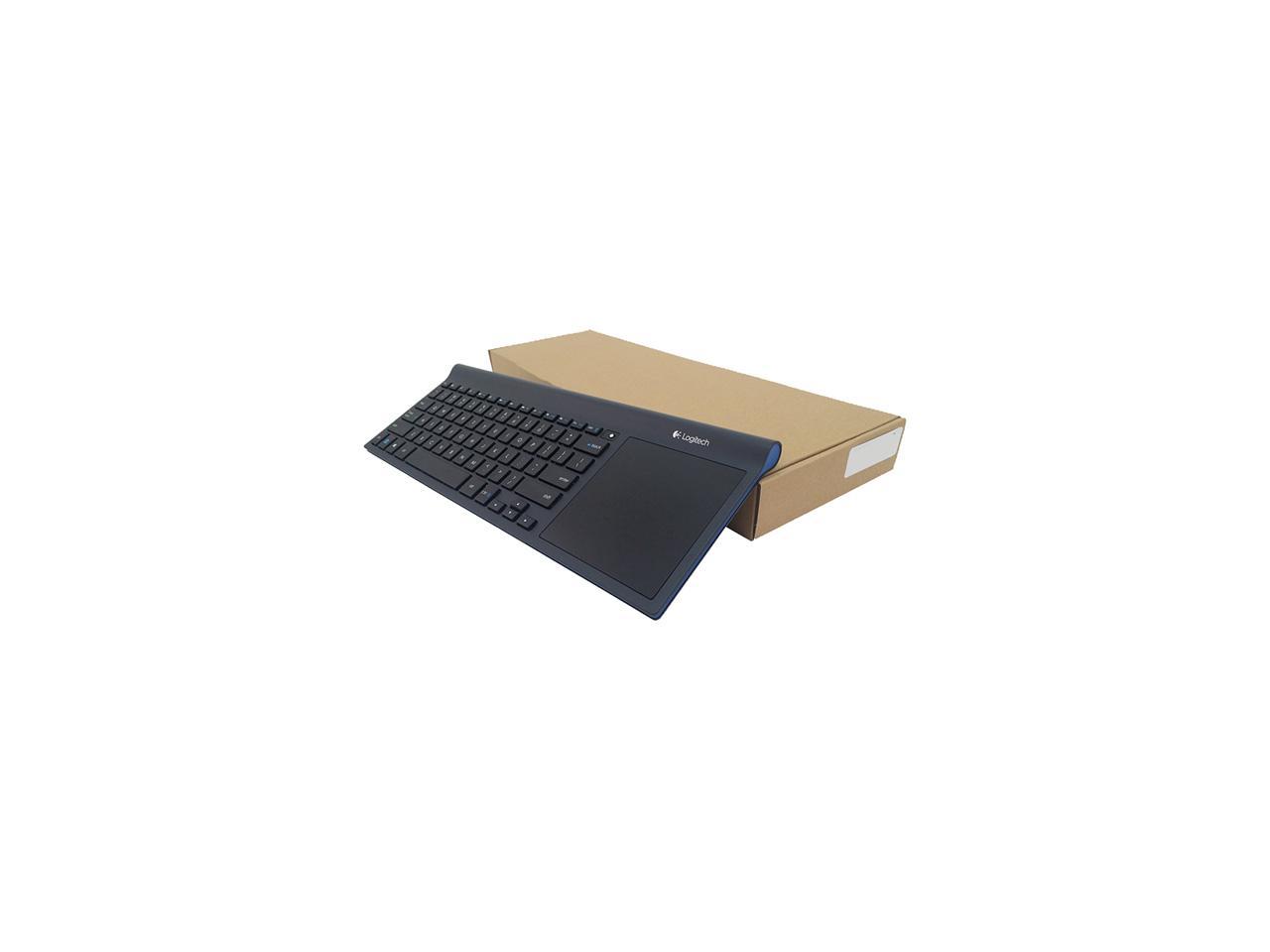 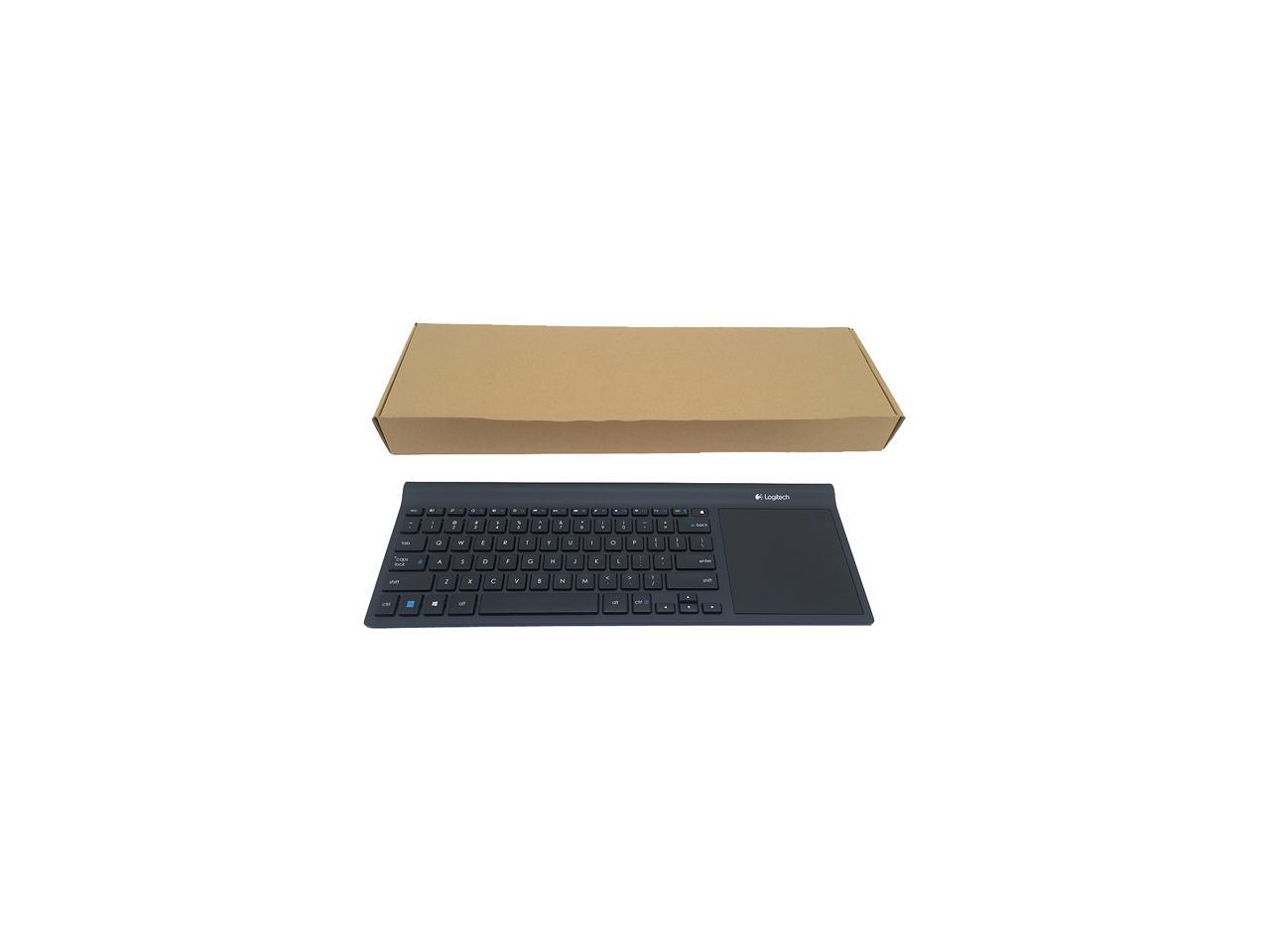 This means the product was tested and repaired as required to meet the standards of the refurbisher, which may or may not be the original manufacturer. Any exceptions to the condition of the item outside the manufacturer’s information should be provided in the listing, up to and including warranty details.
(23) Write a Review
OUT OF STOCK.
Overview
Specs
Reviews

Type and swipe comfortably together, One keyboard for typing, touch and gestures.
FEATURES

The all-in-one keyboard has an ultra-slim design that takes up less space on your desk. It connects wirelessly to your computer, so you don't have to worry about cables getting in the way. The integrated touchpad allows you to navigate the cursor, click and gesture, so you won't need an external mouse.

Type with the keyboard in front of your computer or even on your lap. A tiny Unifying receiver wirelessly connects the keyboard to your computer - just plug it in and start typing and swiping. The connection is robust and reliable, so you can place the keyboard in the most convenient position for you, and still enjoy fast data transmission with virtually no delays or dropouts.

Logitech PerfectStroke key system distributes typing pressure evenly across the key surfaces. Every keystroke feels smooth and whisper-quiet - even if you strike the edge of a key.

Logitech Incurve™ keys match the natural profile of your fingertips. Each concave key surface has softly rounded edges to help your fingers glide across the keyboard. Typing feels fluid and comfortable, hour after hour.

The touchpad supports 13 unique Windows 8 gestures.* Use edge gestures to switch apps and bring up the Charms Bar, or use a three-finger swipe to return to the Start Screen. The touchpad also works well for basic actions like point, scroll or click.

Personalize your experience. Logitech SetPoint™ software lets you customize the settings of the keyboard and touchpad to make typing and swiping more tailored to you.

Type and swipe for up to six months on a full charge. An indicator light tells you when it's time to change batteries, and an on/off switch helps you save power when the all-in-one keyboard is not in use.

*Keyboard battery life based on an estimated 2 million keystrokes per year in an office environment. User experience may vary. Pros: Amazing keyboard, typing this review with it. Absolutely delightful to type with, sturdy design and has a nice heft to it.

Cons: Worst trackpad in history. I've used a lot of laptops, and ive used OTHER logitech touch pads but this is by far the worst design i've ever come across. It randomly stops accepting inputs, has an annoying "click" feature that is not wanted and the multi touch is delayed by decades. it's far too much

Cons: They don't work. Touch pad is very jerky and there are other issues too. (The one I bought last time, 3 months ago Left shift key was not working). It is completely useless.

Overall Review: NewEgg exchanged the 1st defective one free and sent another defective one. To replace the 2nd defective one, NewEgg wants shipping to be paid from my pocket which 8-9 buck 25% of the cost and there is no guaratee they will send good one either. Contacted Logitech. They are completely jerks. They claim they don't support, service or replace refurbished products even within the 90 day warranty. I really did not understand what is the use of the 90day warray. Infact, none of the Logitech refurbs don't work. I burned myself 3 times on NewEgg refurb Logitech items.

Cons: Not super sturdy, seems like it could break after a fall

Overall Review: I use this keyboard to control the computer that I hooked up to my living room TV. The keyboard works great in that regard, allowing me to navigate my PC from the couch without needing to deal with a mouse or wires. The wireless range is also excellent, I can use the keyboard from the opposite side of the room with minimal lag. I frequently use it to change songs while I'm cooking. The battery life is pretty good so too. Ive been using the keyboard almost a month, and I still haven't had to change the batteries. The only issue I have noted with this keyboard is that it seems just a little bit flimsy. Its not going to fall apart in your hands or anything, but I don't get the impression this keyboard would survive being dropped very many times

Pros: Although designed for Windows, it works great with Ubuntu! A few minutes in Ubuntu's Keyboard control panel and Compiz Config let me customize the behavior of the supported gestures very well for my Ubuntu workflow. Good trackpad too.

Cons: Trackpad not as nice as a Mac or some Asus laptops I've used, but not bad. With a list price of $99 new, one should be able to expect excellent tracking rather than merely good. But even with that, in all fairness it is pretty good, and at the refurb price a very good deal. Also, this refurb unit didn't include the batteries as advertised for the retail model. There's only one feature missing on this keyboard: on most trackpads double-click-and-drag selects the word the mouse is over and extends the selection on word boundaries, but here the selection is only by character. Small detail that'll only matter if you do a lot of typing, and fortunately Logitech is aware of it and looking into possible solutions for the future.

Overall Review: I got this to see if it would work well with Ubuntu, and indeed it does. Very flexibly, in fact. Gestures can be handled in many different ways, but here Logitech chose to map them to keyboard shortcuts. This makes it easy to just take a few minutes to map the gestures to the Ubuntu features you want to invoke with them, but once you've set it up it's like it was made for Ubuntu. I'm using Ubuntu 14.04 LTS, but I see no reason it shouldn't work equally well with any Ubuntu version that uses Unity (and probably most other Gnome-based distros as well). Although marketed for light use with an HTPC, I use it for coding on a workstation quite well. With the laptop-sized keys I now have my typing muscle memory reinforced whether I'm working on my laptop or the workstation I bought this Logitech for. The standard retail price seems a bit high IMO, but at this refurb price it's a steal.

Pros: I love the integrated touchpad on this keyboard and was actually the main reason I purchased it. Unlike some other cheap ones I've tried before I found the touchpad to be very responsive and with smooth finger tracking. The giant size of the trackpad is a huge plus as well.

Cons: One thing I found to be a little unnerving was how flimsy the case is, especially by the trackpad. I went to pick it up and it bent quite a bit. Thankfully it went right back and still functions fine but this would probably be best used stationary on a desk. Docked one egg because of this.

Pros: Feel of keyboard is good. Feel of touchpad is OK.

Cons: touchpad is dangerous: it will invent clicks without my actually pressing. So when I scan over a button, it might get selected. In a single one hour session I several incorrect results, some irreversible. This is in Win 10, with the Logitech driver. I found no firmware update. My driver is current. I even turned off "tap to click" and it still did this (perhaps at a slower rate). A real shame.

Cons: Pad has rocker buttons for L/R under it. Causes mis-clicks.

Overall Review: I did not experience much tracking issues, but there are a few misses, which I believe to be cause by low finger tip temperature. (Misses happened after drinking from a cold can of soda). That said, I'm a mouse kinda guy, and use the wireless track-pad and keyboard only when playing media on my home theater using a PC as playback device. I actually like this device and found it's performance very much acceptable for my needs. That said, input devices are a particular type of device. Likes and dislikes are all very subjective. Your mileage may vary.

Pros: Much better than than the K400 (esp. the touch pad)

Cons: It's probably just me (i.e., need practice) but the left click is a bit difficult to manage when I try to copy text.