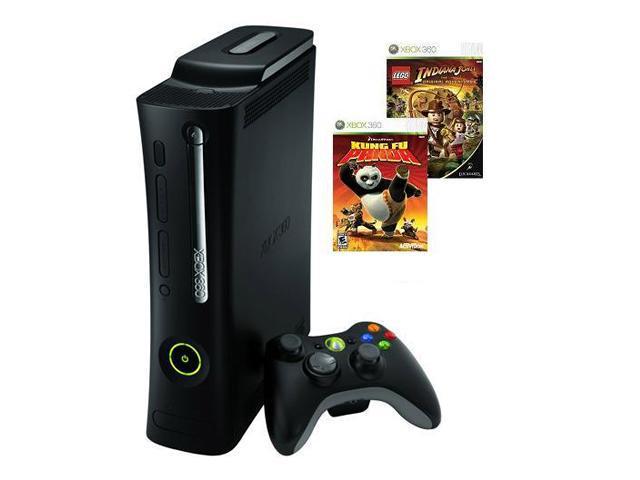 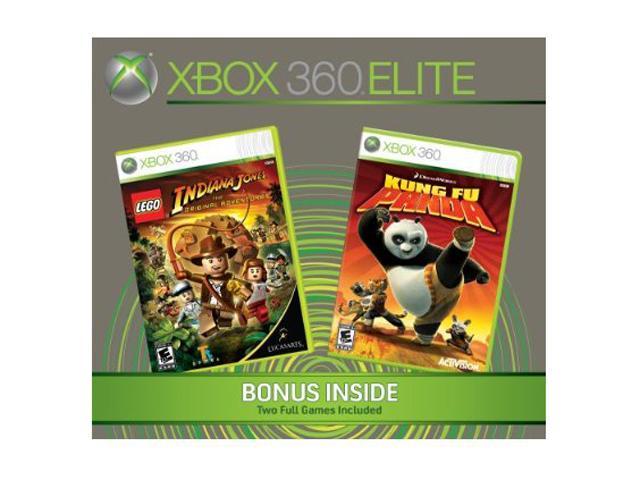 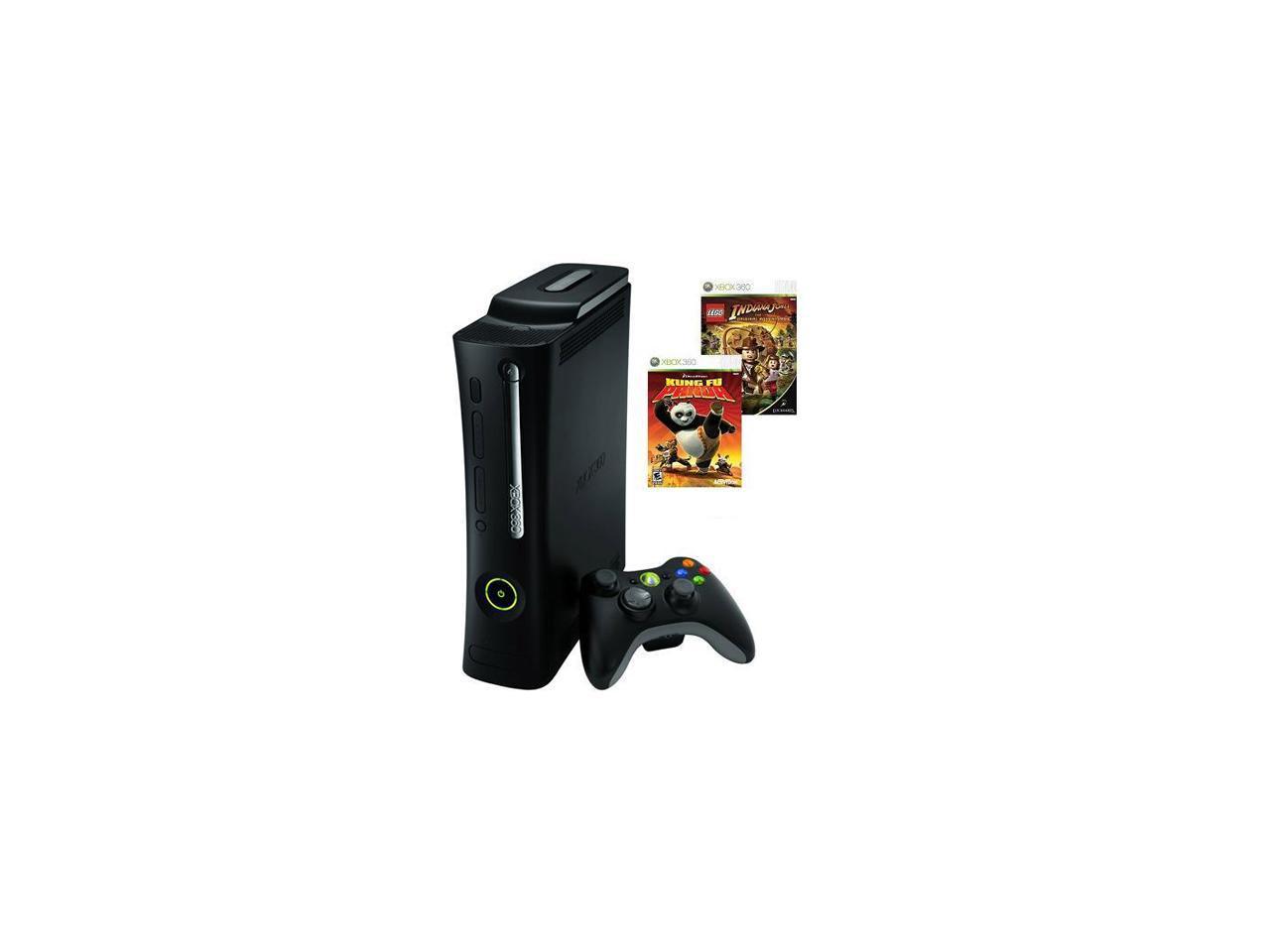 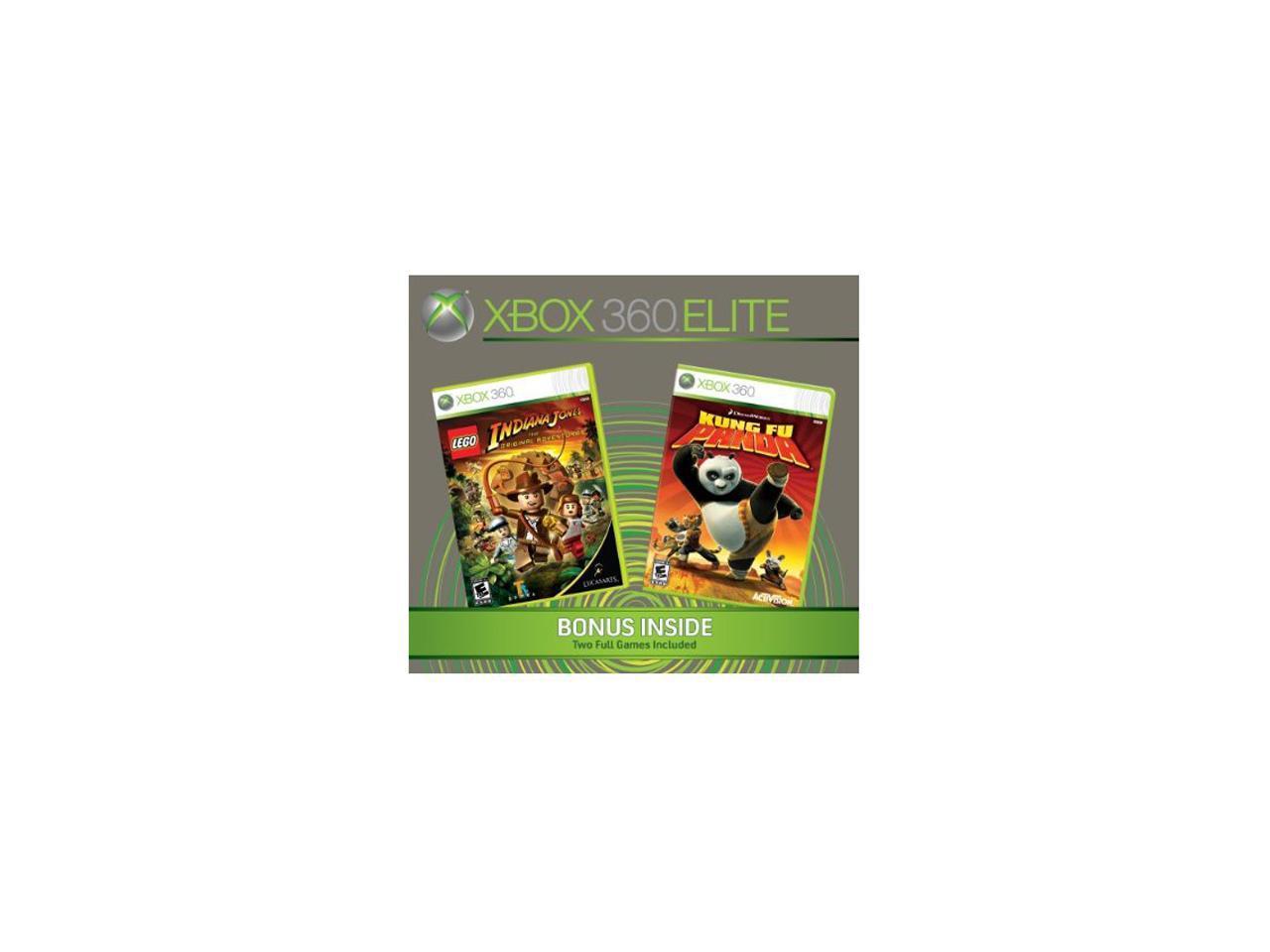 (20) Write a Review
OUT OF STOCK.
Overview
Specs
Reviews
Get games, movies, music, and other downloadable online content via the Xbox Live Marketplace! The Xbox 360 Elite delivers a whole new realm of entertainment possibilities and now even more memory to hold it all! This package includes 120GB hard drive, an HDMI port, a sleek wireless controller, the Xbox Live headset, and a Xbox Live Silver membership. The Holiday Bundle also comes with Lego Indiana Jones and Kung Fu Panda enabling you to enjoy your system right out of the box!
Personalize your gaming experience by ripping your CDs to play along with your favorite games. Share photos, video, TV shows, and chat live via the headset. Watch your standard DVDs in almost HD resolution in 16:9 widescreen.
The Xbox 360 Elite lets you customize your system and your experience to fit your lifestyle. With the industry's highest rated games and virtually unlimited downloads, you can take total control of the world of entertainment!

Pros: Looks good, came with everything you need for Live. Lots of hard drive room. Came with a 50 buck discount.

Cons: I wish they included some sort of charging station. I didn't get both the games that were supposed to come with the system. They offered to return the whole system, but the system worked so I didn't want to return it, then they offered a 30 dollar credit for a 46 dollar game. One of the representatives helped me out thou.

Overall Review: If you are sitting on the fence between the Pro and the Elite get this system. You get a larger HD and a HDMI cable.

Pros: Very happy with the purchase! The two games that came free are adicting, especially "Kung Fu Panda". The whole family had fun playing it. 120 HDD!!! So much space for music and pictures. Very easy to hook up with the HDMI cable that came with the console.

Overall Review: The price is the same as everywhere, but the free shipping and not paying tax make newegg.com the best place to buy. And it came the very next day after the order as if I ordered next day shipping. :)))

Pros: Well is an xbox. But this xbox is black and matches the rest of my entertainment center. Got the first one took about a week played it for about a day and it stopped reading disks. Newegg issued me an RMA with no questions asked. Sent this one back on a Tuesday and received my replacement the following Tuesday not to shabby.

Overall Review: Newegg took care of my problem and they did it fast. Go egg

Pros: This elite system is great i havent had one problem out of it. great picture out of the HDMI

Cons: The only con i have on XBOX systems all together is the fact they tend to red ring. this model however has never broke

Overall Review: this is a great system allthough microsoft didnt go a great job in the design of some of the internal stuff. but over this model is incredible

Pros: great console with various games. i'd say it's perfect for entertaining it's great that they added hdmi cable overall console had better improvements that previous ones.

Overall Review: so far so good.

Cons: hmm, it doesn't work like a PC? and the DVD drive is WAY too loud... the xbox is as quiet as a whisper... until you put in a game to play...then its turbine time.

Overall Review: well, I thought i had a problem with the HDMI sound... but it was just that the Xbox was set to dolby 5.1 sound and I had a TV with stereo sound... just set the sound to digital stereo and the crackling stopped!

Pros: I ordered on Wed. Morning and had it on Thur. afternoon with the cheapest shipping. I just wonder if I paid for the fastest delivery if it would have just appeared instantly lol. Anyways , just look at the thing , this console should have shipped black on all models of it because it looks so much better. I love the 120 gig hard drive , I'm downloading like crazy already and wont be running out of space anytime soon.Also the fact that it comes with 3 full games , 1 on the hard drive with like 10 other demos , and then the 2 games mentioned on the box, makes this a no brainer for anyone in the market for a 360.

Overall Review: I just wish my TV had HDMI , but Im getting a new TV sometime soon too so no worries.