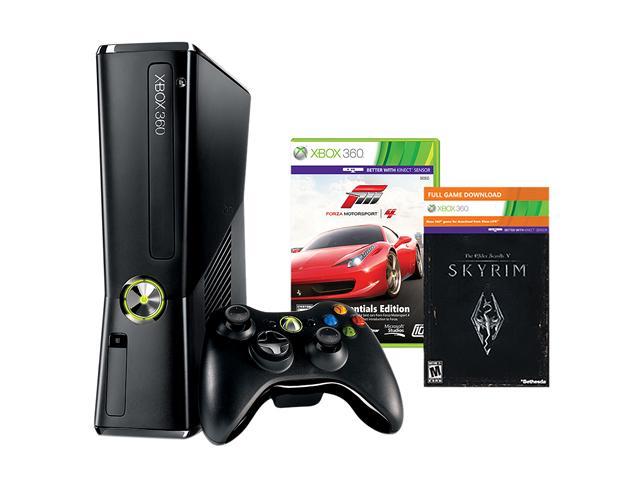 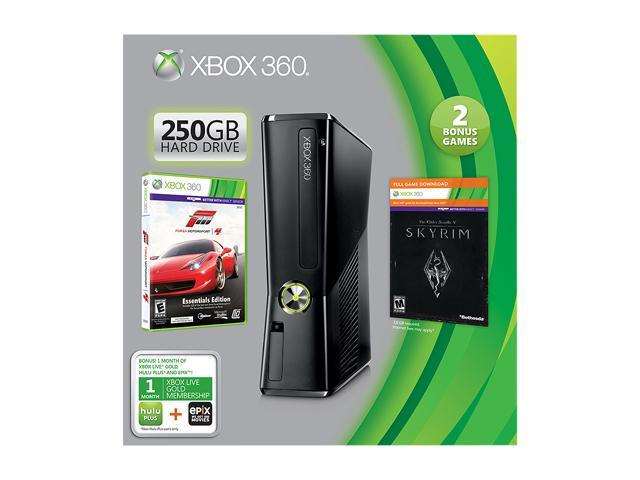 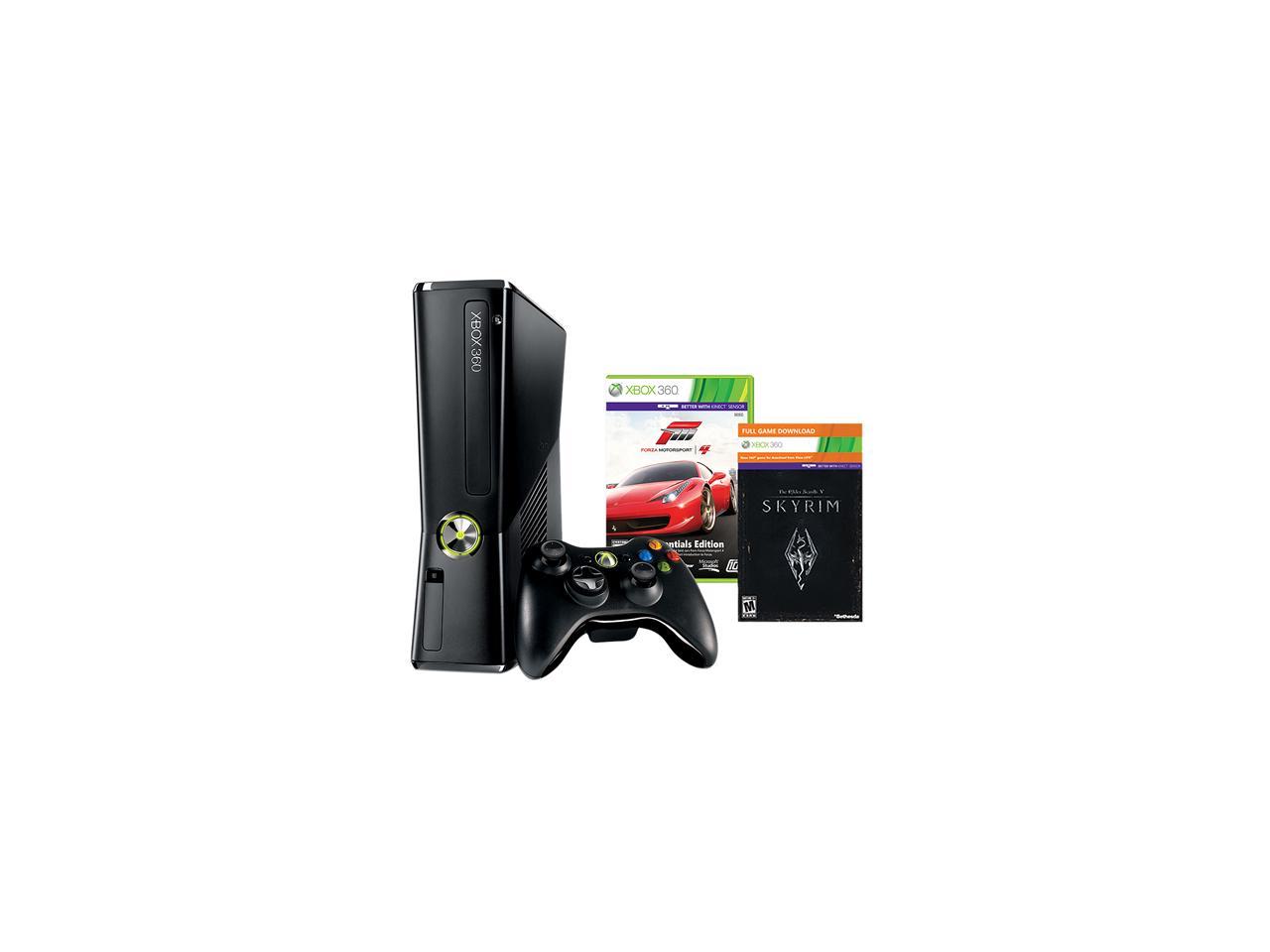 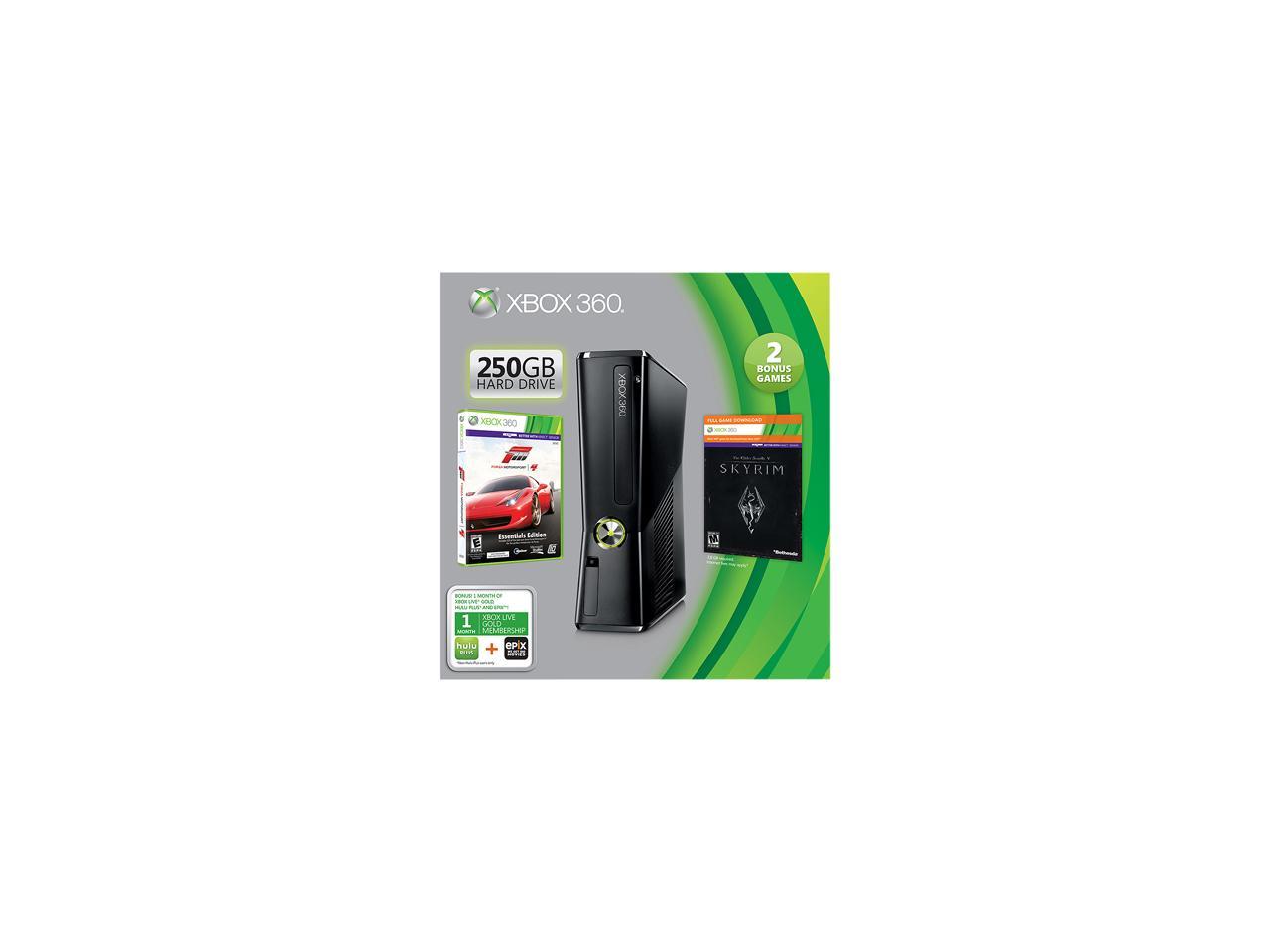 Pros: Everything works and was a good deal.

Cons: Newegg listed skyrim as a download like it was but listed Forza 4 as the whole game however it was a shorter version. I bought this with Forza in mind!

Pros: I've owned an Xbox 360 since '05. I do not game as much as I normally do, but saw how good the deals were going to be this year and decided it would be wise (and wouldn't hurt) to have another Xbox. I have 2 slims now. Both run great! The newer models are way better + the fact you can store games to it and save your Disc drive is amazing! Way better than older generations. I also picked up the warranty for a little extra as well. Definitely would buy again!

Cons: Only bad thing I don't know what to do with Skyrim. Not my style of gaming. I prefer racing, music games or FPS.

Pros: You get the 250GB model with a full download of Skyrim and a limited version of Forza for $250. This is a good deal.

Cons: As stated, the Forza game is not the full version, but it does has several cars and tracks. Also, my batteries that were included were dead.

Overall Review: I was trying to figure out why my controller kept turning off. I the noticed when I turn it on that the ring would start flashing indicating low batteries. I changed them out and it now works great. Have never has this happen where controller batteries were DOA.

Pros: -50$ Off the console +2 Free Games Internal Wireless compared to the Wireless adapter is such a huge difference. Have yet to drop connection. It clearly shows in the picture Forza 4 is the Essentials Edition for someone who might not be too observant.

Cons: There can't be any cons with such a great deal.

Overall Review: Originally had a 360 Arcade Jasper Unit with a 120G HDD, but that sucker got full quick and with a deal like this I couldnt turn down the offer to upgrade. Wireless Booyakasha! BAM!!

Pros: - XBox 360 Slim model. - Functions great as 1st XBox360 setup. - Comes with batteries. - COMES WITH A HEADSET! - XBox comes installed with ~5 games (mini-games rather). - Wireless works and detected every network around my house that my PC detects. - Controller is wireless && comes with 1 set of AA batteries. - Box is packaged very well - each component has it's own wrapping. - Runs great after 1st setup - many settings such as startup/shutdown/sleep options, background downloading, joining XBOX Live (or not), games history. - 250 GB storage - already is paying off: (Skyrim is 3.5 GB - if you get the 4 GB model and need to use a digital download [which Skyrim is], then you're already at your limit..). - Any HDMI cable really will work (it's the small connectors) to replace the AVG standard cables. - 1080p resolution w/ many TV resolution settings from within XBOX settings menu. - Holiday sale prices more than make up for the total value.

Cons: - CANNOT move XBox360 while it's running with a disk inside - it'll sound like the game inside is a broken fan scraping the insides.. (any vertical movement.. aka. don't pick it up even 2").. - No HDMI cable - the AVG cables included do not include Blue and Green (just yellow, white, red) - blue/green give you HD qualities (sortof). ANY HDMI cable will work to solve this. - Forza 4 is NOT the full game - it's more like a demo on steroids.. - Skyrim takes a WHILE (could be days if you're using the wireless..) to download.

Overall Review: This XBOX 360 bundle is a great deal. Skyrim is an amazing game. I got this, an additional controller, and 2 charge-and-play kits over the holiday in order to play some games w/ co-workers (I'm really more of a PC gamer, but wth.) I wish that Forza was the full game - it's not, it's still good, but it's not the full edition. The consoles are so cheap (compared to an entire gaming PC) - but they really get you on the XBOX Live stuff - so plan for that. You don't need XBOX Live to run your games - only the online multiplayer, and various shopping features. I would buy this again..

Pros: I absolutely love Xbox years of enjoyment to follow. Plus It's nice that USB's can be used for memory cards.

Overall Review: If you like games get one. Get as PS4 as well.

Overall Review: ive been back and forth with the xbox 360 and ps3 and owned almost every model of them both including the superslim ps3 and the model s xbox 360 slim.