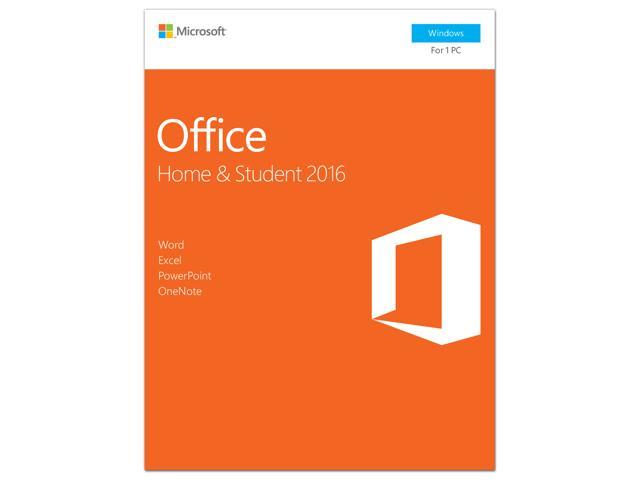 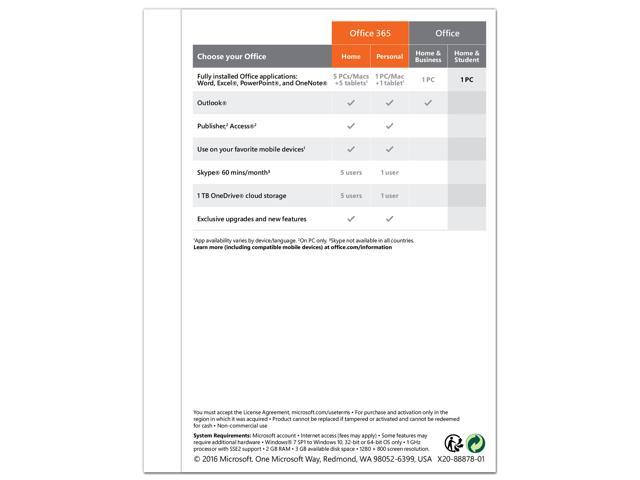 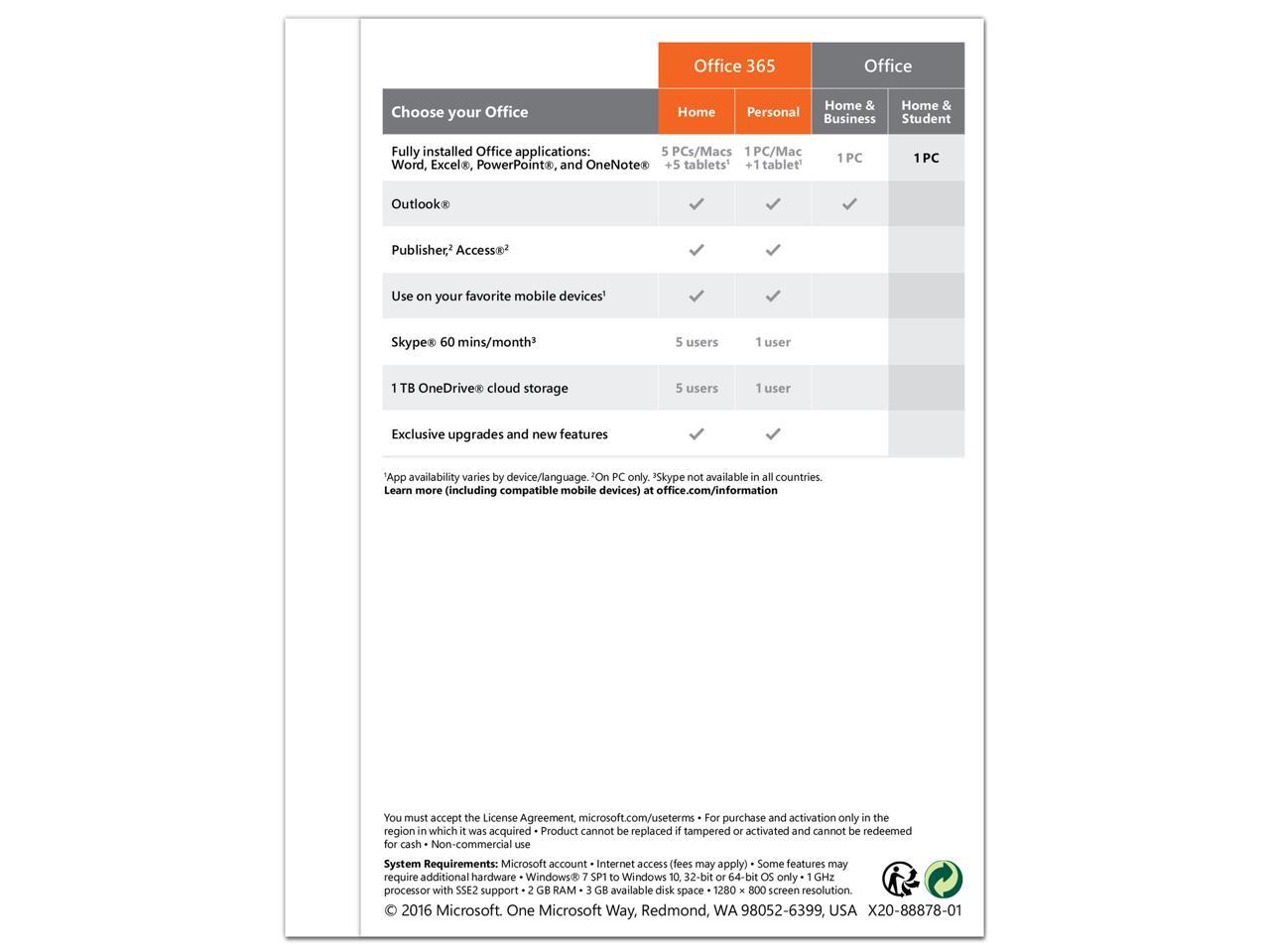 Pros: + Includes full versions of entire Office suite upgraded as new versions come out with active subscription + Enables use of full iOS versions of Office on iPad Pro 12.9" models (still don't know why it's free on all the smaller iPads...) + 5 users each receive Office along with 1TB each of OneDrive space (a total of 5TB of cloud storage) + OneDrive is easy-to-use and works flawlessly

Cons: - It's Microsoft Office. If you don't like Office, you won't like this. - OneDrive only uses a single folder and its subfolders for syncing. Services like Carbonite allow you to select multiple folders in different locations on your PC for cloud backup. A nice feature for a future update, please, Microsoft?

Overall Review: I have my desktop, my laptop, an iPhone, and an iPad Pro, and I use them all for my business. I was looking at G Suite and Dropbox to store my files in the cloud for easy access on all devices when I realized I could just buy Office 365 and get 1TB of OneDrive space for significantly less money than the annual subscription costs for either of those two services. It's like getting the Office Suite for free! I always thought 1TB of cloud storage wouldn't be enough space for me, but when I truly scrutinized my documents, it turns out I'm using less than 300GB leaving 700GB of future-proof storage available for me! In addition, Microsoft Office apps aren't free for the 12.9" iPad Pro, so I now have access to all of my files and the entire Office suite on my iPad. Office for iOS is actually quite a robust suite for a tablet-version meaning I can leave my laptop at home if I'm not intending to do any desktop publishing or photo- and video-editing on-the-go. So very nice. I've been incredibly pleased with the OneDrive service, automatically syncing files between my desktop, laptop, iPad, and iPhone through the cloud and being able to make changes that propagate to all my devices easily and seamlessly. In addition, the OneDrive app for iOS and Android can be set to automatically upload the pictures you take on your smartphone to the cloud - a great alternative to Apple's iCloud or Google Android's online backup services. The initial setup to copy your files to the OneDrive is time-consuming, of course, but that's because of ISP upload speeds, not the OneDrive service. Getting five different licenses of Office was also exactly what I needed for my household. in addition to my laptop and desktop, my wife owns two laptops and a desktop (don't ask me why she needs so many computers). Plus, I have a mix of Windows PCs and Macs. Being able to have access to five copies of EITHER version is an outstanding feature, and dramatically increases the value of Office 365. One big money-saving suggestion: Keep an eye on pricing and wait for a deal. Newegg and other online resellers regularly put Office 365 on sale for much less than it's $100/year MSRP. You can buy additional keycards and add them on to your new or existing Office 365 subscription, extending your Office 365 service a year per card and saving a bit of money off MSRP in the process. Overall, I can't stop raving about OneDrive. Sure, the Office suite is nice, too, but the key element to this subscription for me was the cloud storage - a total of 5TB between 5 users - for much less than G Suite or Dropbox. Fantastic stuff!

Pros: No subscription or online access required (except for downloading the apps) No requirement of previous Office version installed. (Remember those days? Thank goodness that restriction is no longer around)

Cons: Still pricey. Requires Microsoft account, which is free but still a bit of a hassle if you don't have one. No physical media in the box. You must download the Office apps from the official website after redeeming the key online.

Overall Review: This is a key code on a card inside of a small cardboard box that is delivered to you. This listing is not instant code delivery.

Cons: - MS expensive - Would have liked to have gotten a cd instead of download

Overall Review: - If you need it, get it

Pros: Learning to use the Office programs many years ago one short fall for me was trying to keep current when new upgraded versions became available. Office 365 solved that with the ongoing updates. The home addition works the best for me with two of us in the same household with two desktop pc's and two Microsoft Surface 's I have everyone covered with one inexpensive license.

Cons: I'm sure the developers work very hard to try to keep making the product better but sometimes their improvements make some tasks more difficult for long time older age users like myself.

Overall Review: In the last two years I have upgraded my subscription from 365 Personal to 365 Home, and purchased three more 365 Home subscriptions for two grown children's households and for one homeless shelter for use by their staff. So yes I would surely recommend this product.

Pros: Bough this for a friend and although it wasnt meant to work customer support made it work in South America.

Cons: How is location still a problem for Microsoft when we all connect to the internet from anywhere?

Overall Review: Buy it online, save the hassle of shipping

Pros: I required this product for business use, and Newegg had a good promotional price for this item. Product was shipped the day after ordering, and I received it in the mail in 7 days. The package was sealed and obviously new, and the product code worked perfectly. Installation was a breeze, and the programs work as they should. Very smooth and easy transaction with Newegg, and I'm very pleased with my purchase!

1 out of 1 people found this review helpful. Did you?
Raymond G.
Ownership: 1 week to 1 month
Verified Owner
Microsoft 10, having been a user of 7 has greated a slower than expected learning curve. Office home and business has been much easier to adapt to.8/28/2016 9:23:18 AM

Pros: I'm retired, so this is used to assist with volunteer work that I do and most of the applications are working OK.

Cons: When using Outlook, I had difficulty getting my address book to display any information. Finally used enough "help information" to get it to work, somewhat frustrating.

Overall Review: Given time and experience, it appears it will function at a much higher degree than the older version that I've been acquainted with. I would recommend it to others, but would like to have videos of each component to help get started. If they are already here, I've not located them as of now.

Pros: Worked as advertised. Downloaded from keycode with no issue.

Overall Review: Worked as advertised. Downloaded from keycode with no issue.