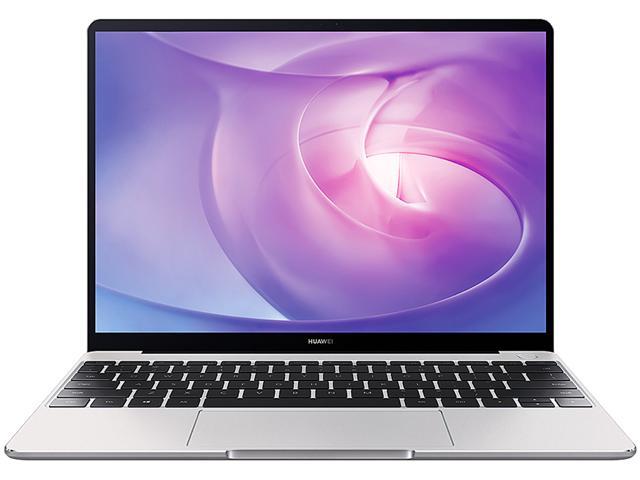 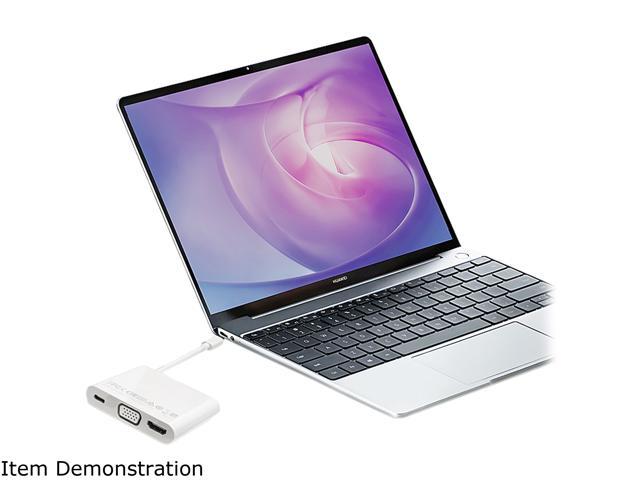 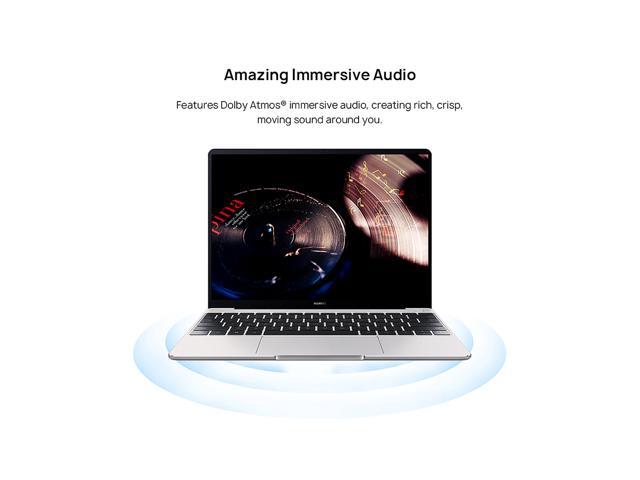 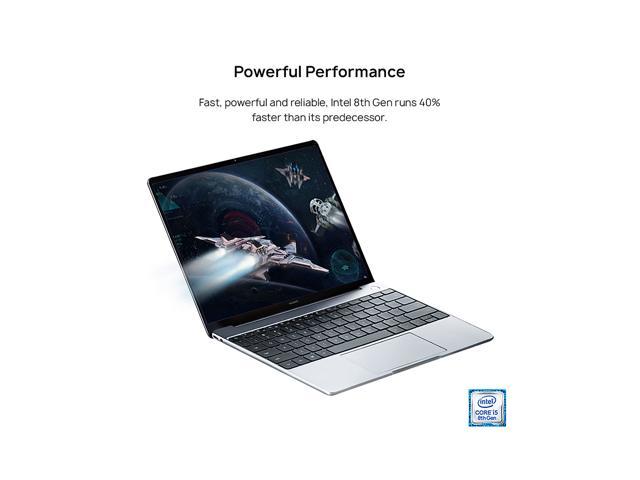 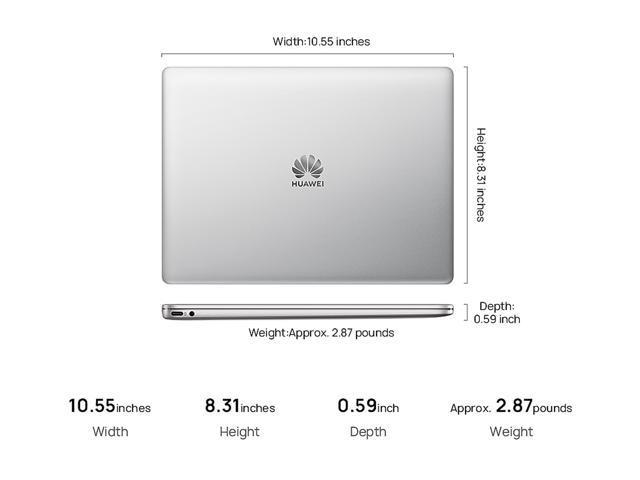 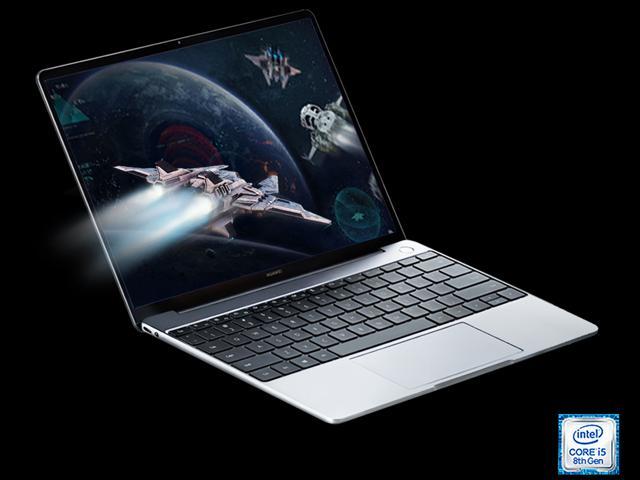 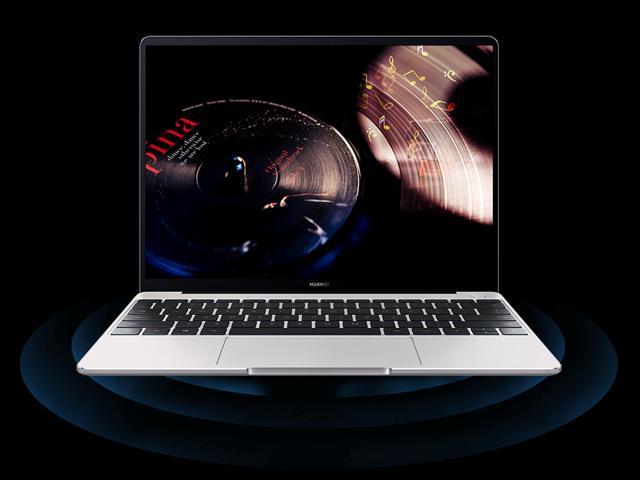 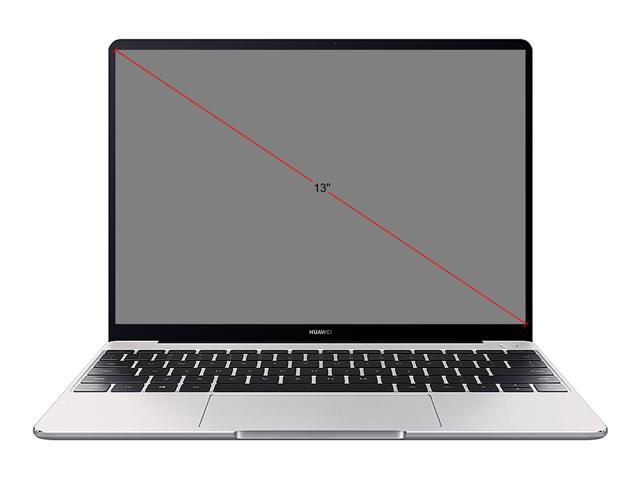 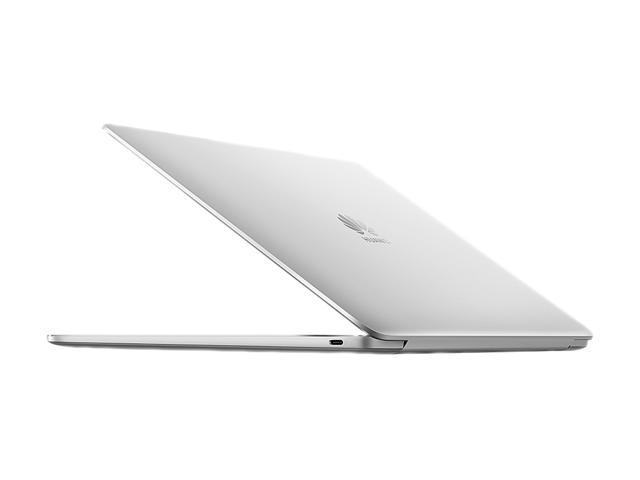 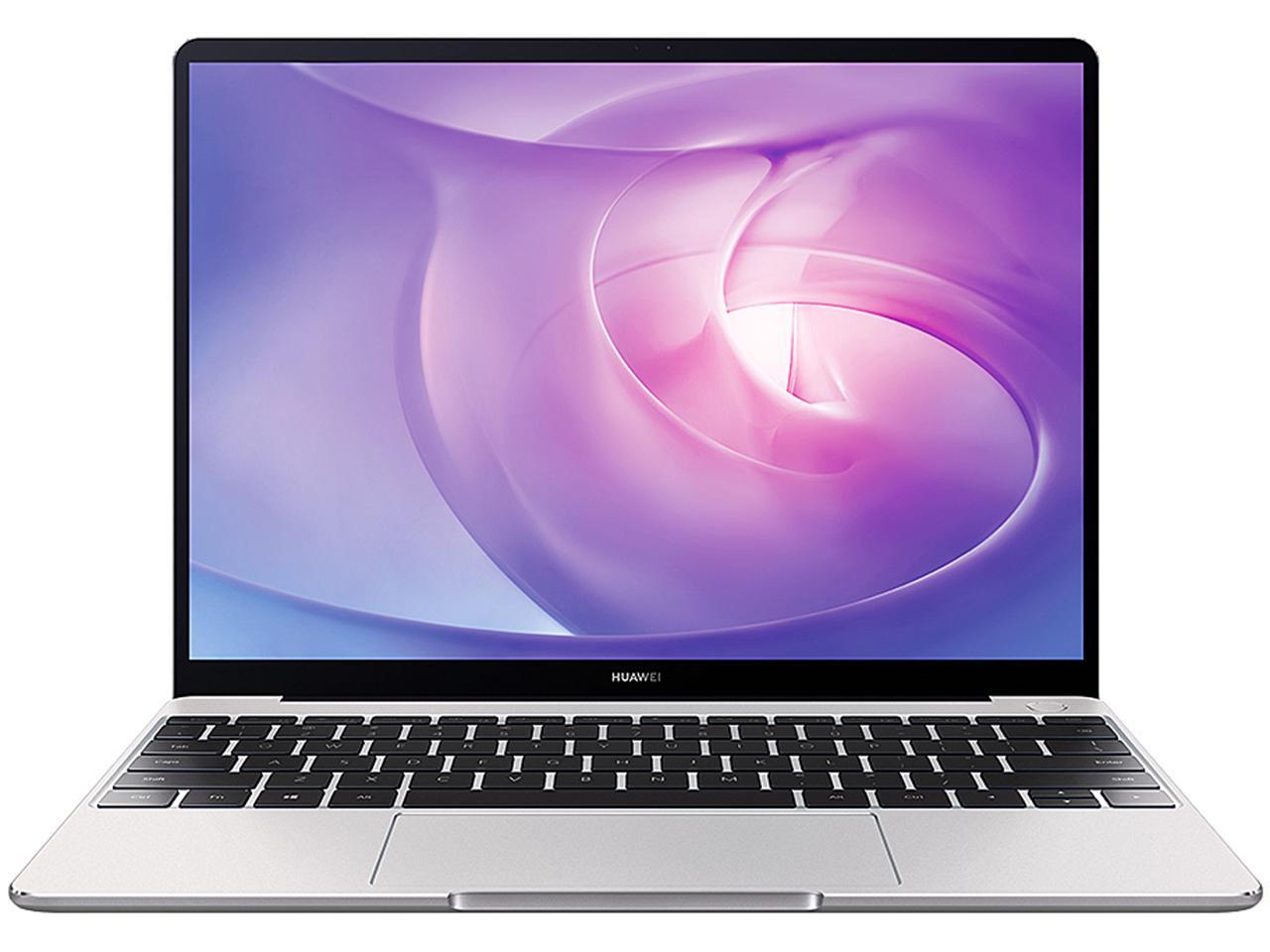 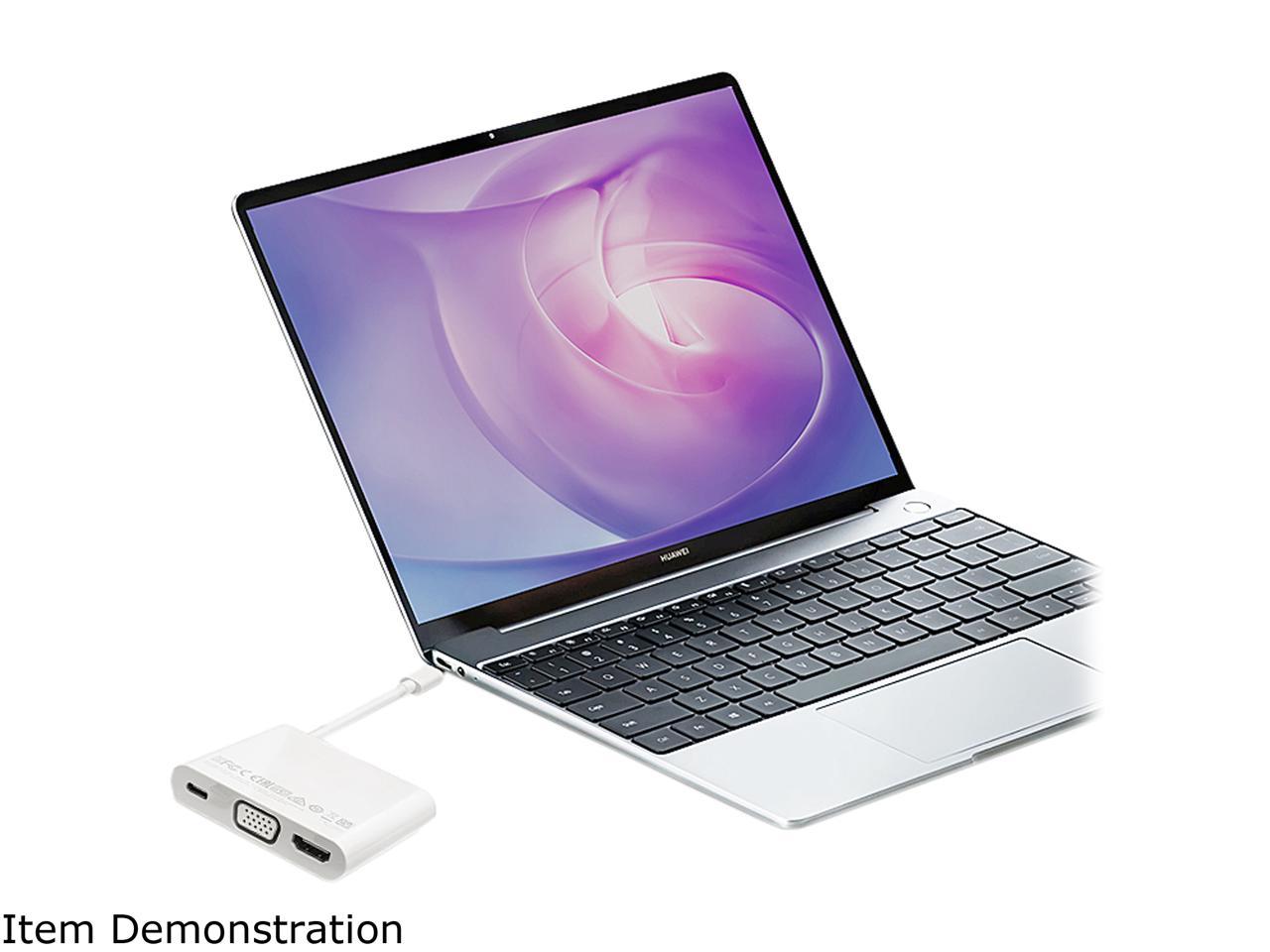 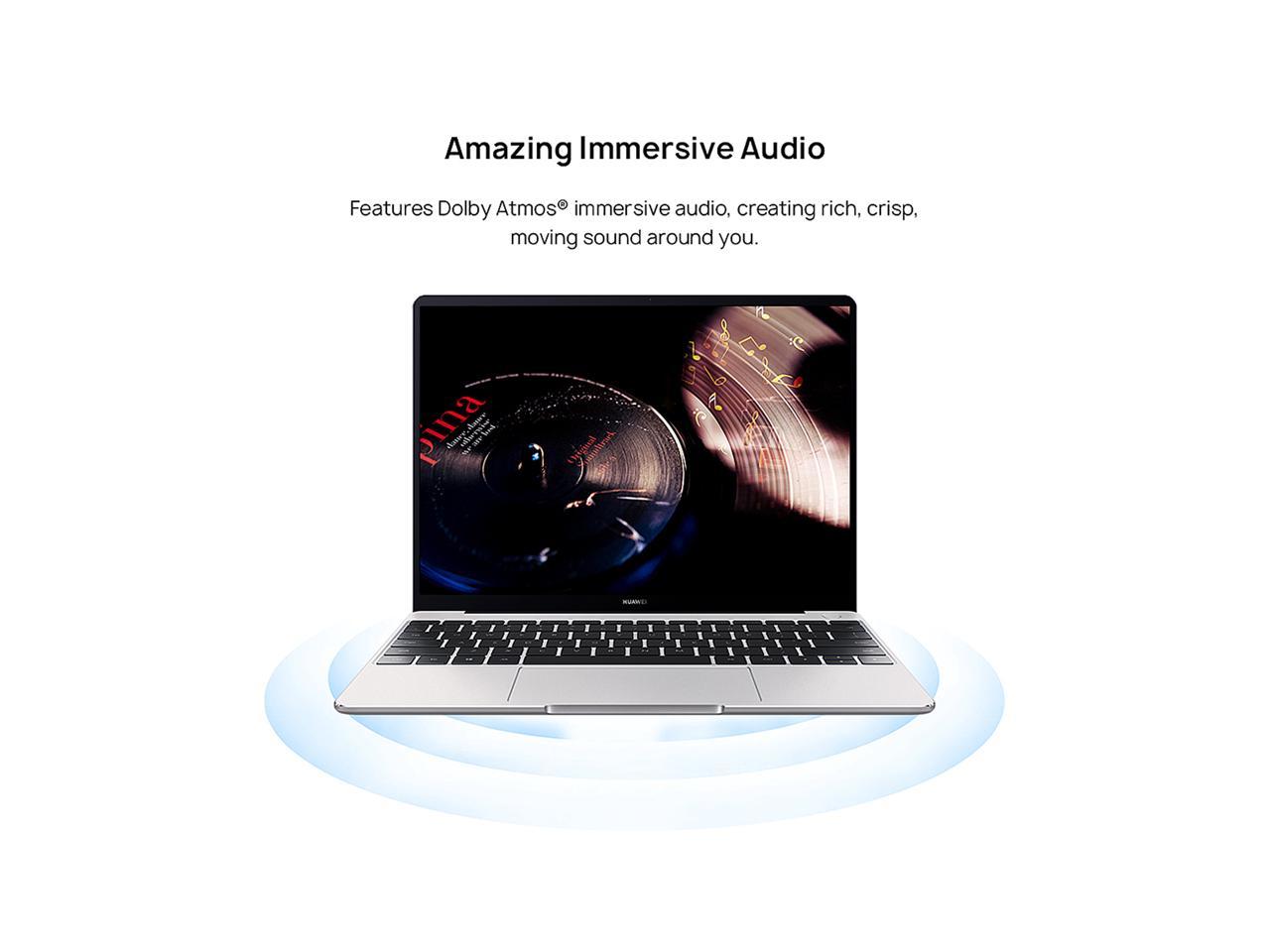 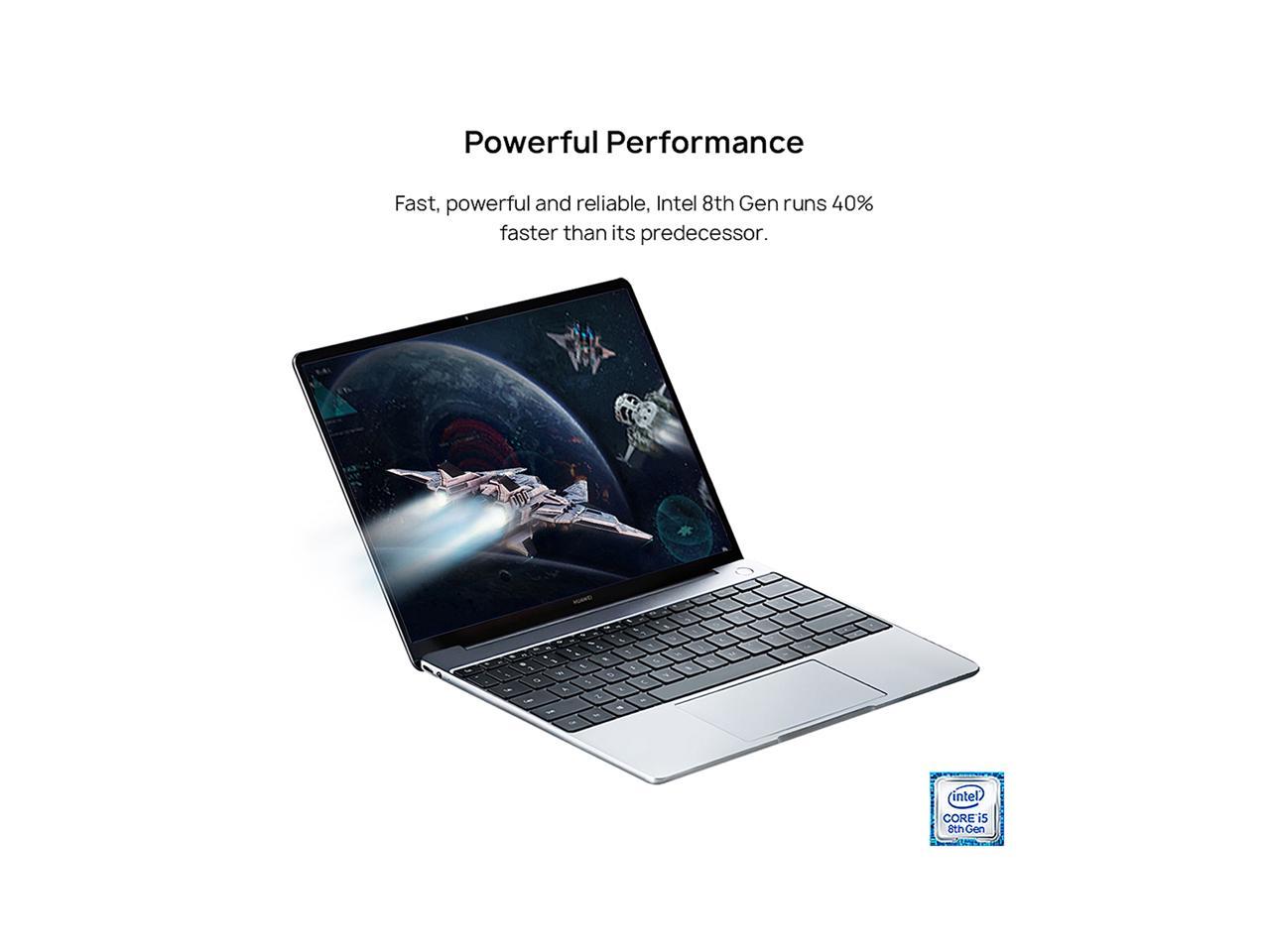 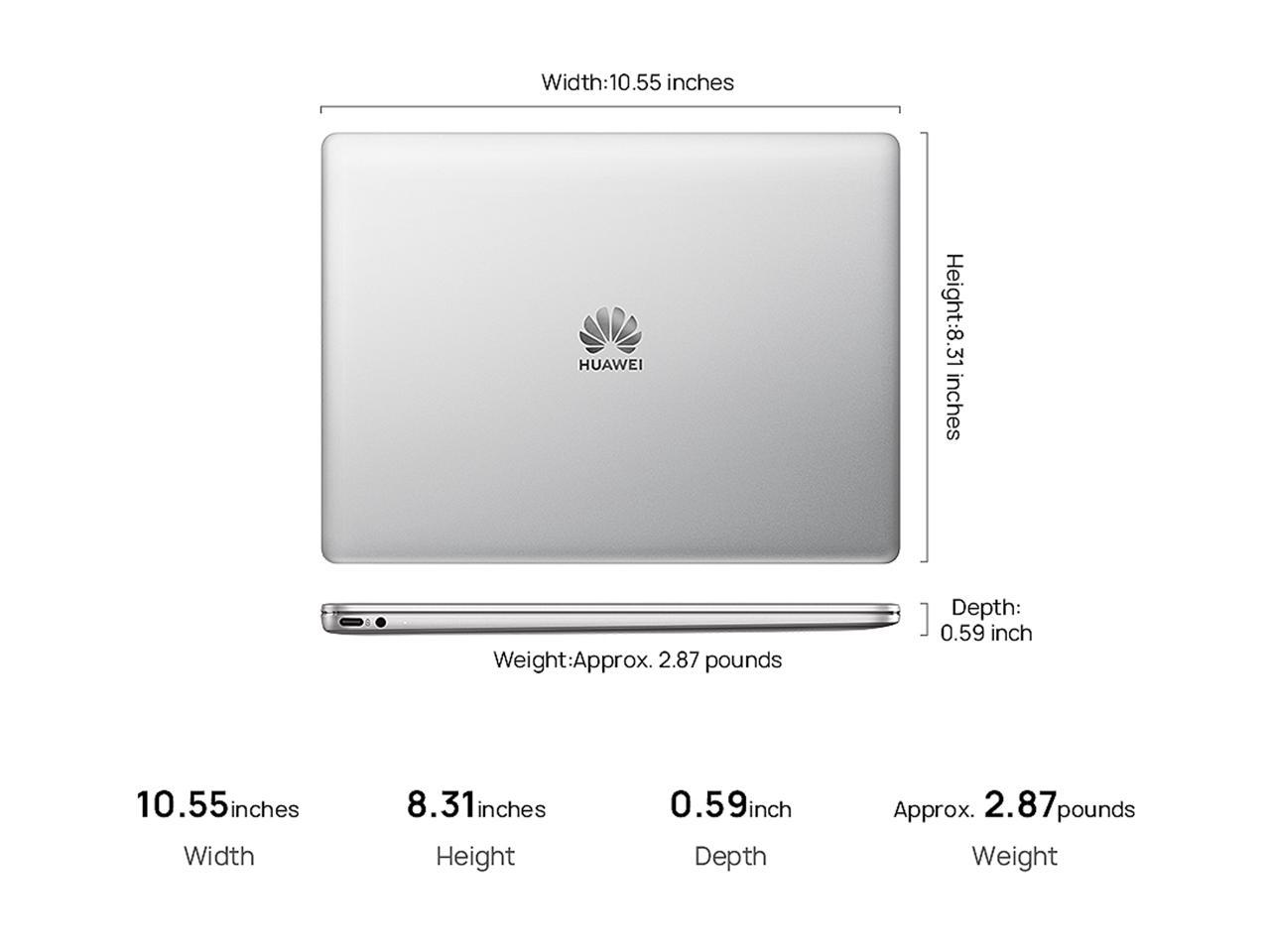 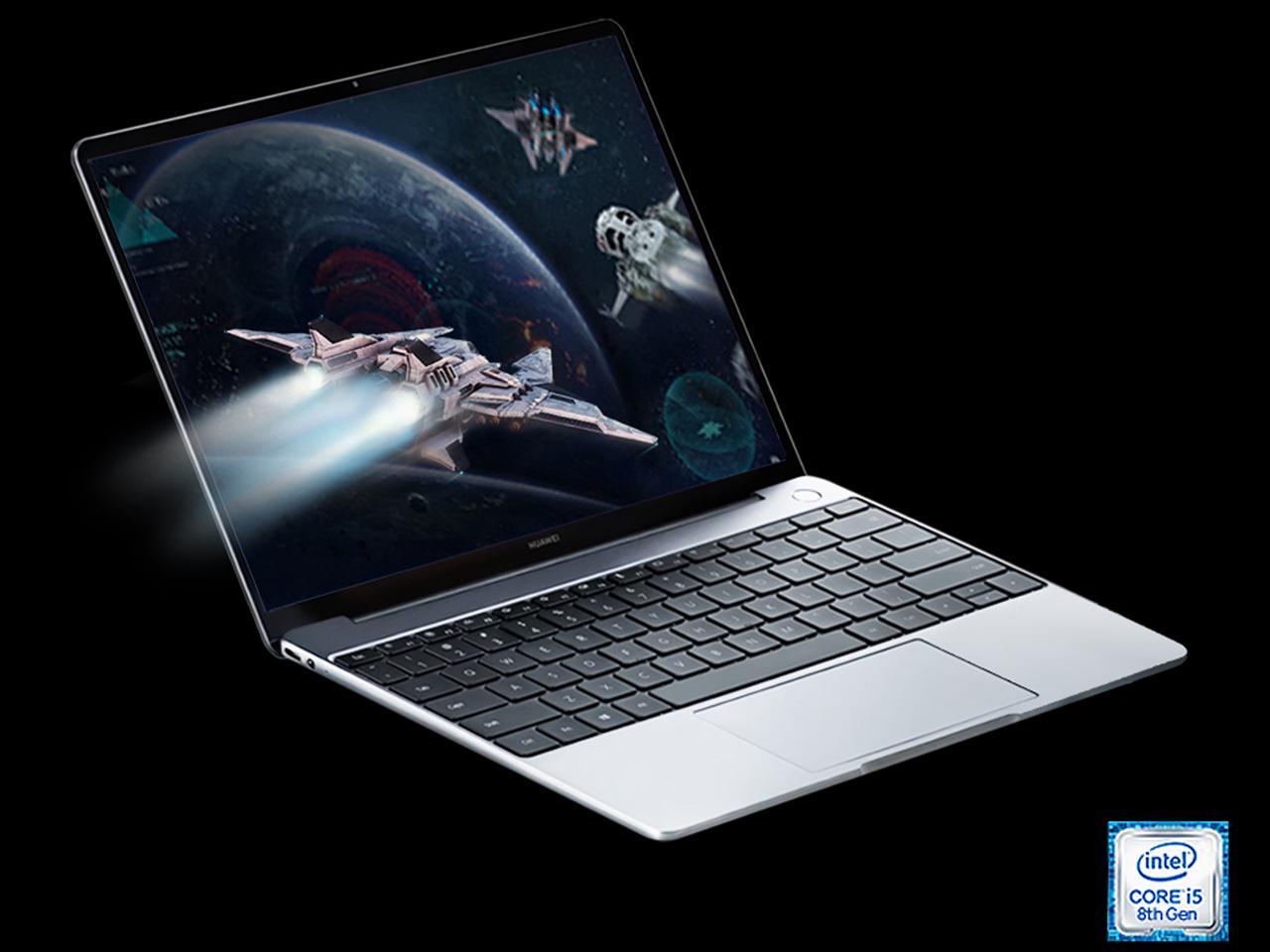 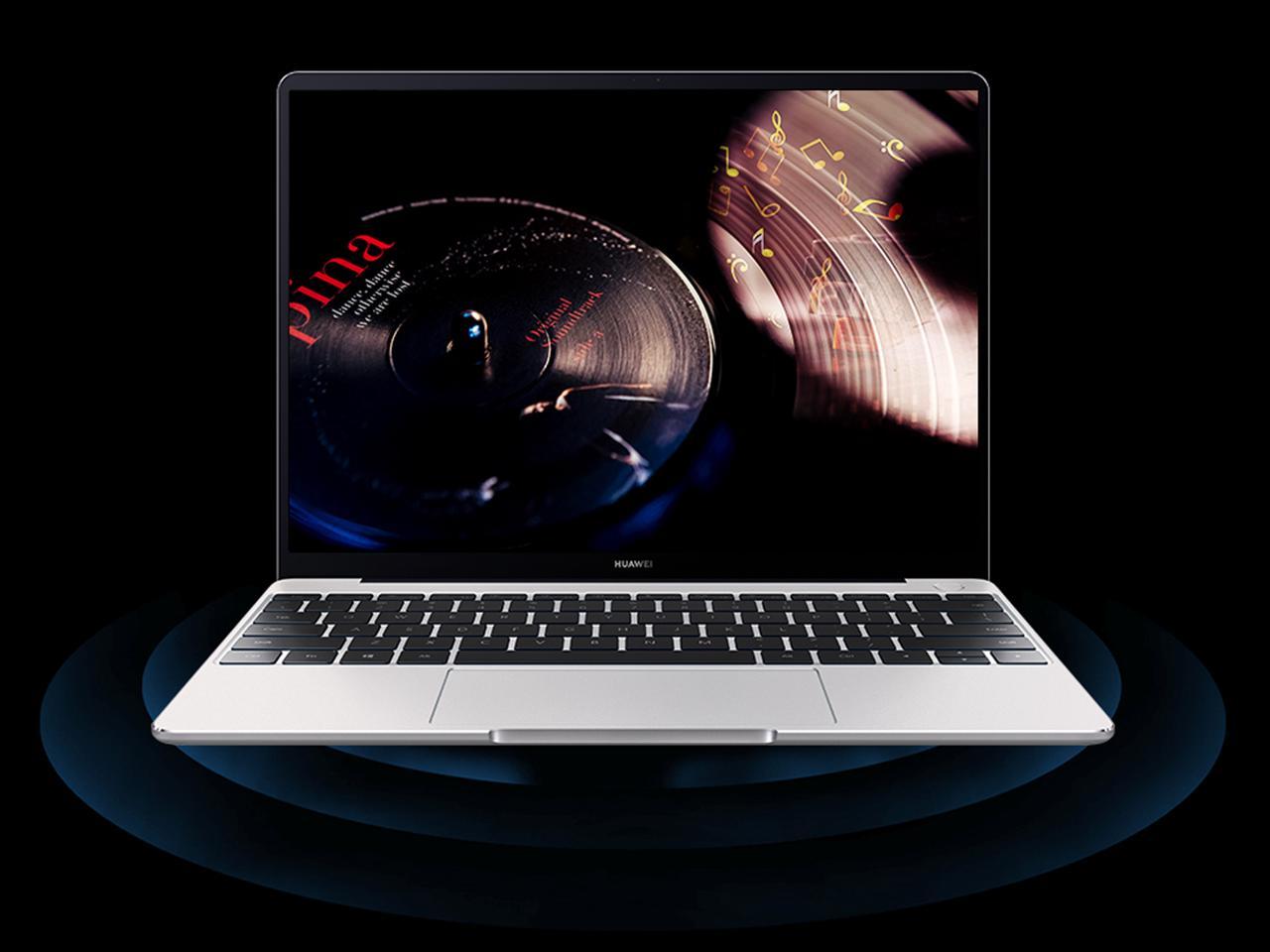 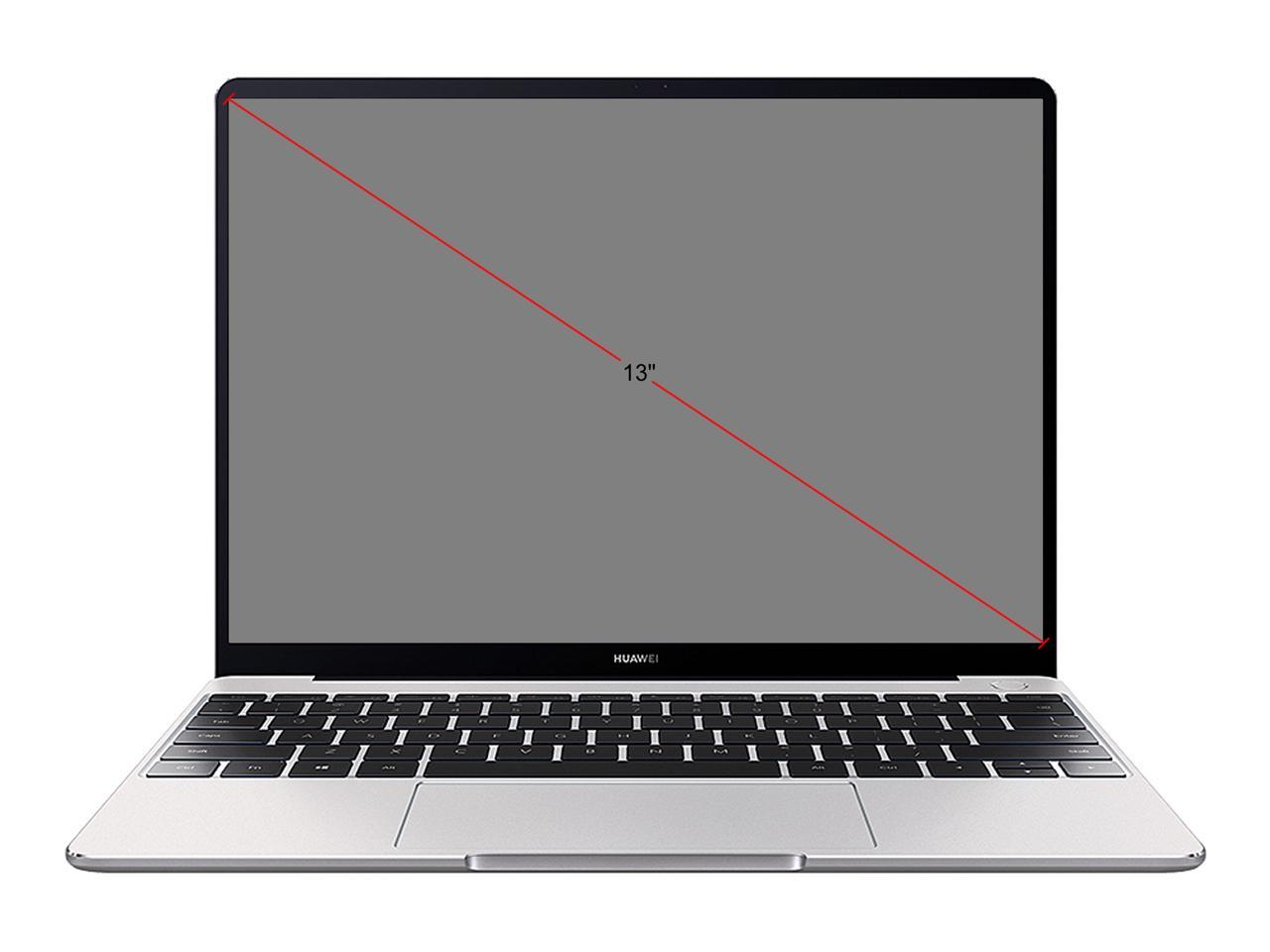 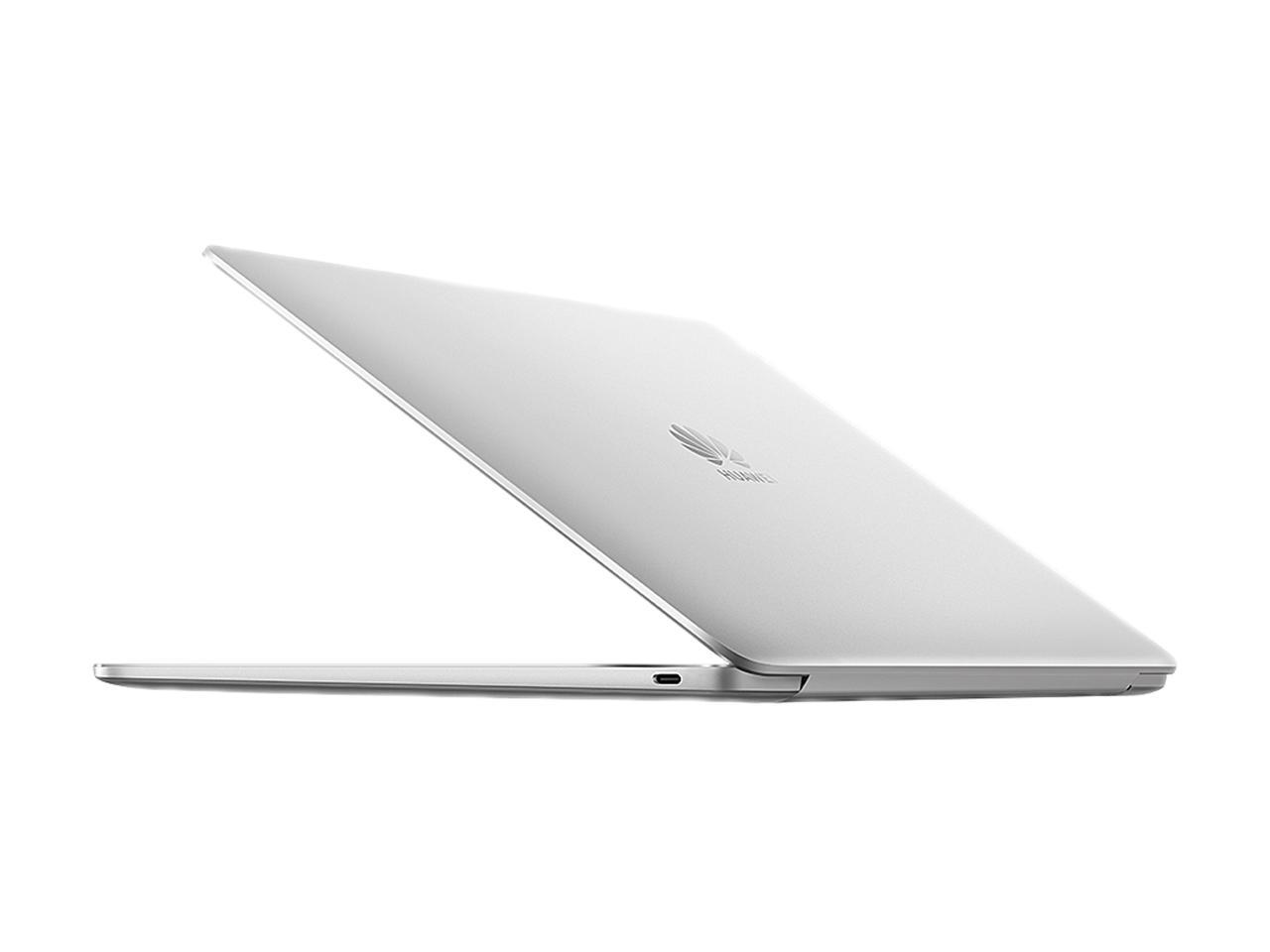 This HUAWEI laptop's FullView Display delivers more than an impressive screen, it brings to life a fully-immersive visual experience. With an 88% screen-to-body ratio, the HUAWEI MateBook 13's slender 4.4mm bezel makes more room for bright, rich, and vivid graphics to ignite your imagination. Be spellbound. Navigate intuitively with the HUAWEI MateBook 13’s high-precision multi-touch screen. The 10-point touchscreen is fine-tuned for sensitivity, responding to your every touch with complete accuracy. An anti-fingerprint coating keeps the 2160x1440 resolution screen beautifully bright, clear and smudge-free. Lightweight yet robust, the HUAWEI MateBook 13 is designed for optimal portability. Its slim-line 14.9mm metallic frame is meticulously crafted with a diamond-cut finish on each corner, giving it an ultra-modern premium look and feel. Simply put, this is a powerfully elegant machine.

Streamline your day-to-day life and accelerate your creativity. The ultra-slim body carries NVIDIA® GeForce® MX150 graphics with 2GB of GDDR5 video memory (VRAM). Get up to 4X performance over integrated graphics for image processing and video editing.¹ The graphics are also backed up by 25W TDP (thermal design power) to make video editing and gaming smooth, fast and reliable.

1. Data from NVIDIA, the above data is based on the comparison of an Intel i5-7200U with HD620 integrated graphics. Speed and power come together in the HUAWEI MateBook 13 to deliver revolutionary performance capabilities. Featuring the new 8th-generation (Whiskey Lake) Intel® Core™ i7 8565U processor,² it runs 40% faster than its predecessor and 10% faster*** than the KBL-R processor. In terms of power and longevity, it's a game changer for laptop technology. HUAWEI’s new Shark Fin 2.0 fan design can dissipate heat faster than ever by using dual fans. The 25% speed increase4 of normal fans enhances airflow to cool the computer rapidly and quietly for a better working experience. This new technology means your workflow will be uninterrupted and smooth even when running multiple programs or playing intense games.

4. Based on results from HUAWEI lab tests. The fan's single free-flow-field air volume is pulled from 2.4CFM to 3.0CFM, an increase of about 25%. Charging Fast and on the Fly

The HUAWEI MateBook 13 comes with a pocket charger that's much more than a charger. It can Quick Charge your laptop and your phone with multi-functional connectors, giving you 2.5 hours of office use from a 15 minute charge,5 no matter where you are. It’s fast, eco-friendly and portable—it fits in your pocket and most importantly, fits your life. Don't Just Hear It, Feel It

The HUAWEI MateBook 13 features Dolby Atmos®6 immersive audio, creating an amazing headphone experience with breath-taking, moving audio that flows above and around you. You’ll feel like you’re inside the action as sound comes alive with richness and depth and seems to move in a three-dimensional space.

6. Dolby Atmos® can be experienced through headphones. Easy on the Eyes

The HUAWEI MateBook 13's state-of-the-art screen can filter up to 30% of the blue light that strains the eyes over time. Simply select Eye Comfort Mode to automatically adjust white balance and color tone to protect your retina and avoid eyestrain, allowing you to work and play in optimal comfort for as long as you like. Learn more about the Huawei Wright-W19C

Pros: I'm a long-time linux user and I always feel trepidation when buying a laptop because hardware support under Linux can sometimes be a problem. This laptop delighted me. I installed Ubuntu 20.04 daily release as-of March 28 2020 (pre-release). I included proprietary and restricted software during the install. Everything works out of the box, no tweaks required: wifi, bluetooth, disk, USB ports, second monitor, power detection, function keys, shortcut keys on keyboard (brightness, sound, mic, etc), suspend-resume. The touch-screen works flawlessly, and I use it a lot. The screen is resistant to oily smudges, which is great. The keys feel good for a laptop (I have mechanical keyboards for my PCs). I can type without undue errors. I'm a developer and sysadmin, so the keyboard is important for me. Holding the device in my hand, it feels heavy, sturdy, and rigid. Feels good, man. The screen and keys stretch almost to the very edge of the machine, making the most of the available space (and making the device itself as small as possible), which I really like. The screen is really high dps, so unless you have good eyesight you will want to change the scale of the UI font and icons. This is neither good nor bad, just... is.

Cons: Disclaimer: As I mentioned above, I'm using a pre-release of Ubuntu 20.04. I've used the laptop for a few days. Twice the GUI has crashed and restarted - and a crash report was sent to Ubuntu. My applications were all preserved, so no loss of work or anything, just a few seconds while the UI was frozen. The fingerprint reader is not recognized by fprintd. Nit-picking... The screen dimensions are more squarish (4:3?) and I tend to prefer a more wide-screen view. You can tell the body cover is mostly sheet aluminum pressed into shape, rather than milled from a single piece of aluminum. Great for keeping the cost down, but not quite as nice a feel as, say, a Mac. Nevertheless, it still feels good (for pressed aluminum).