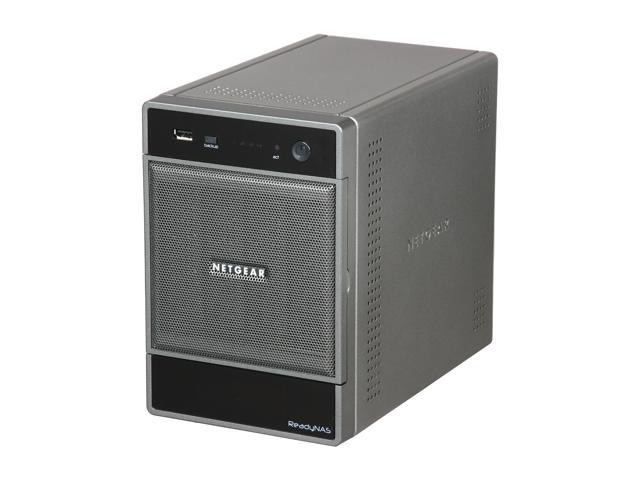 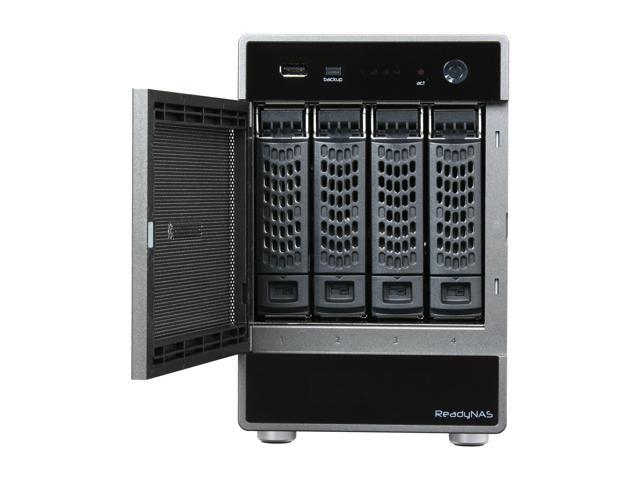 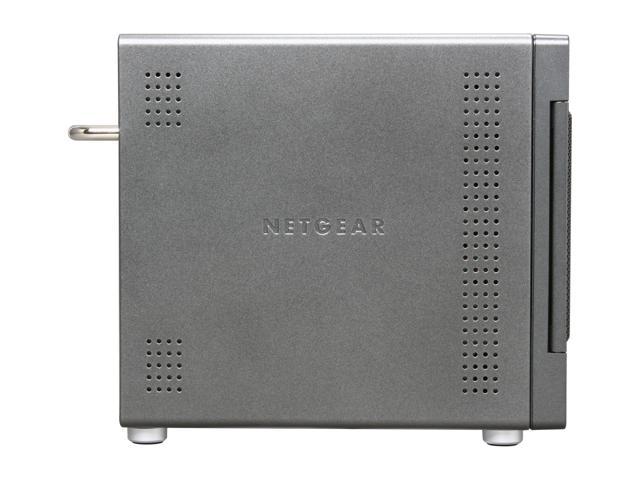 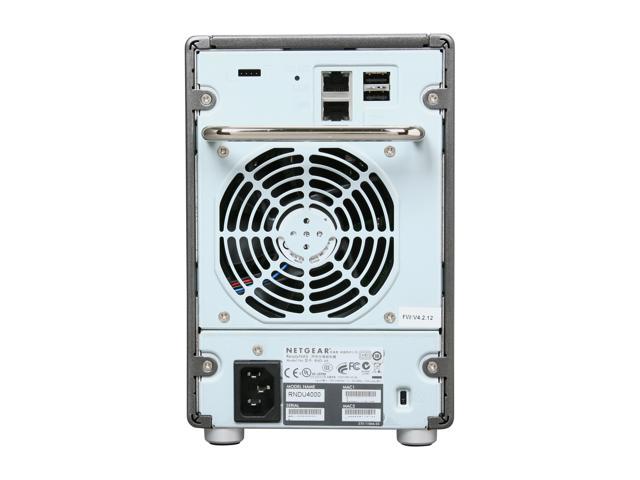 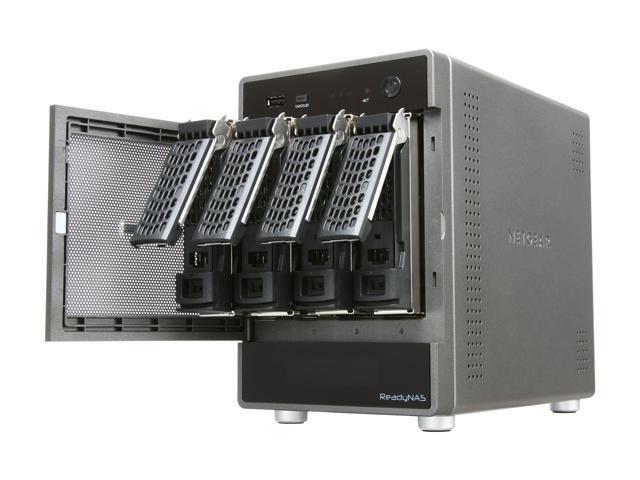 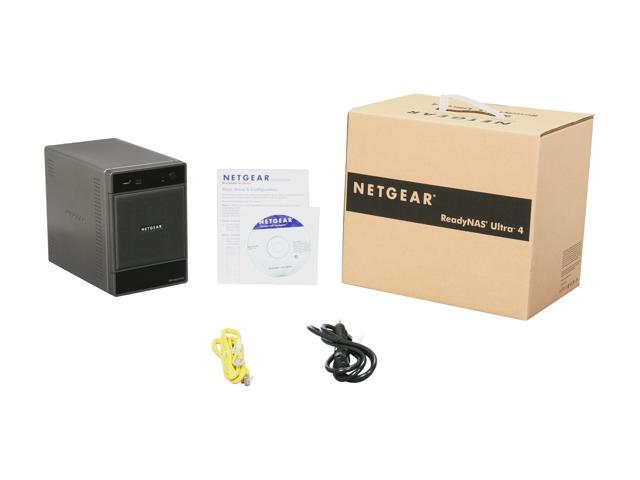 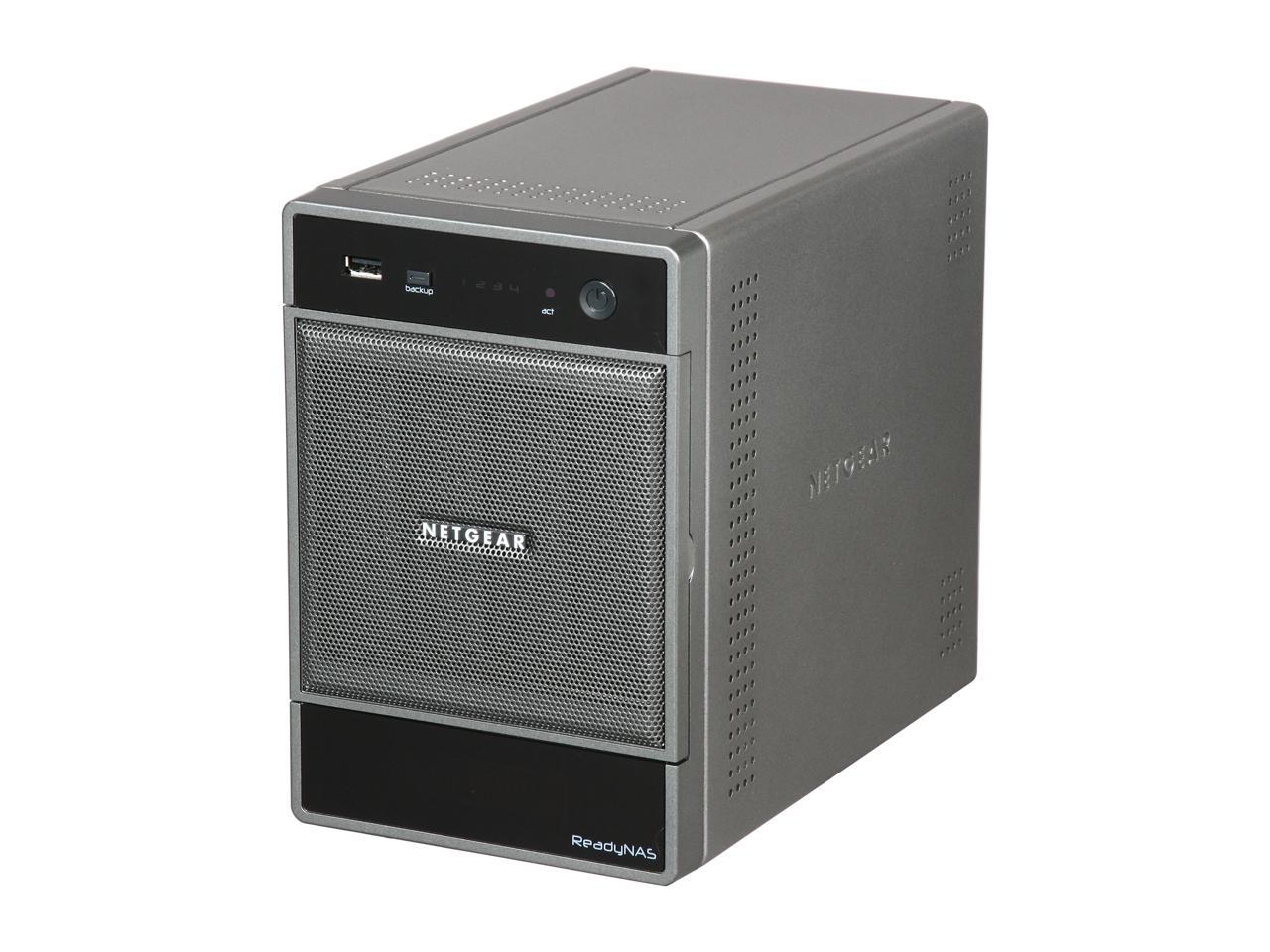 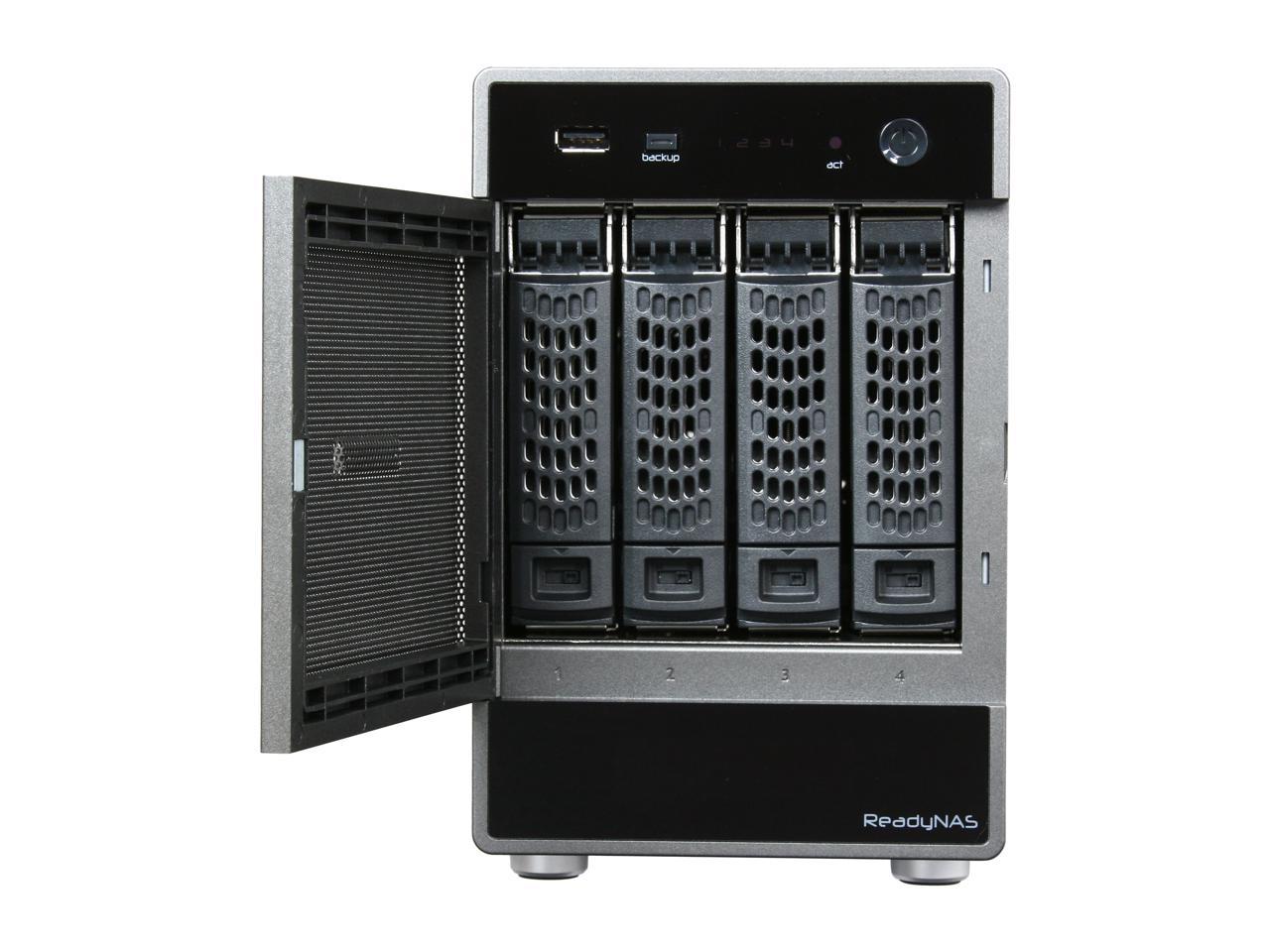 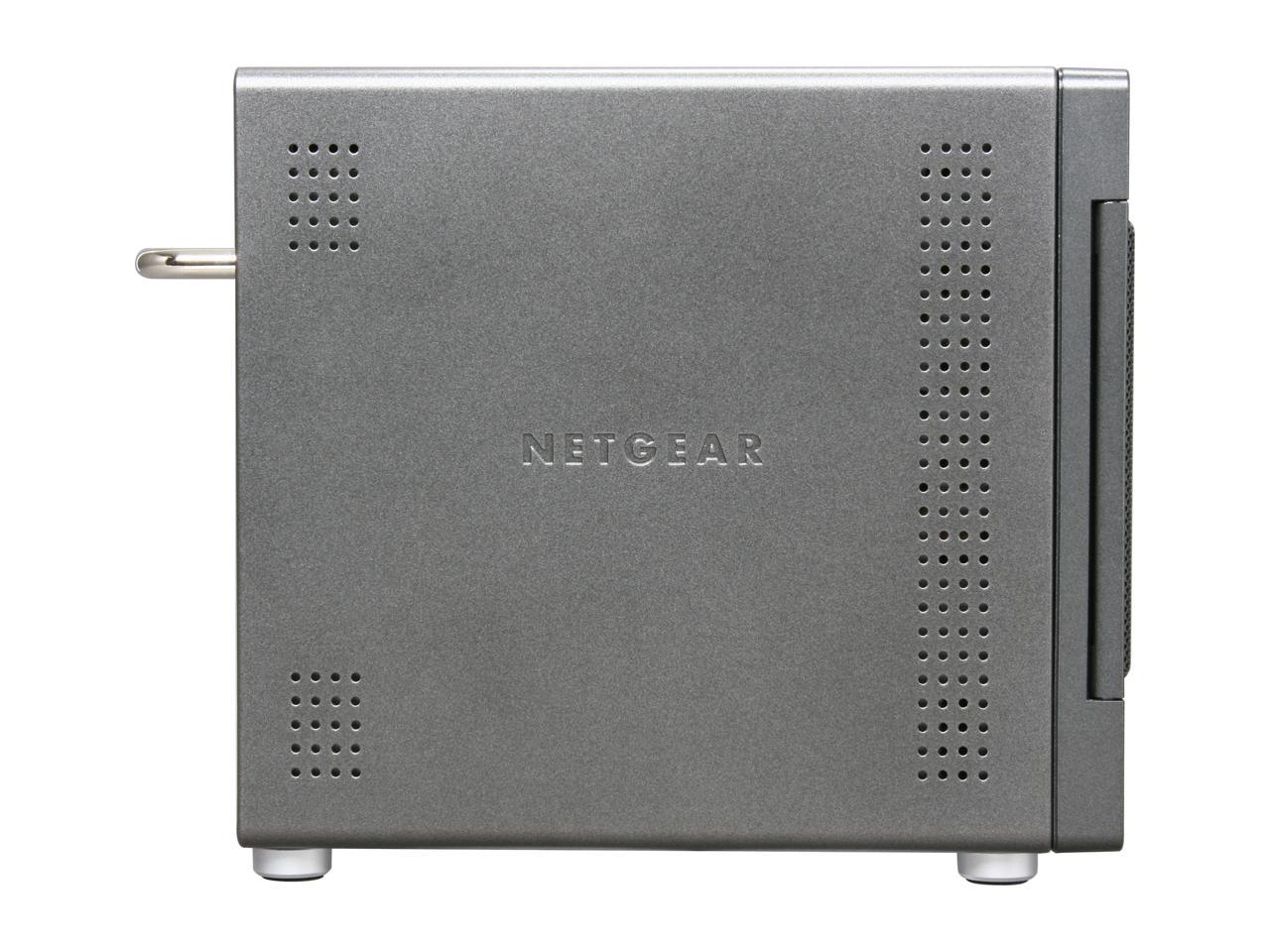 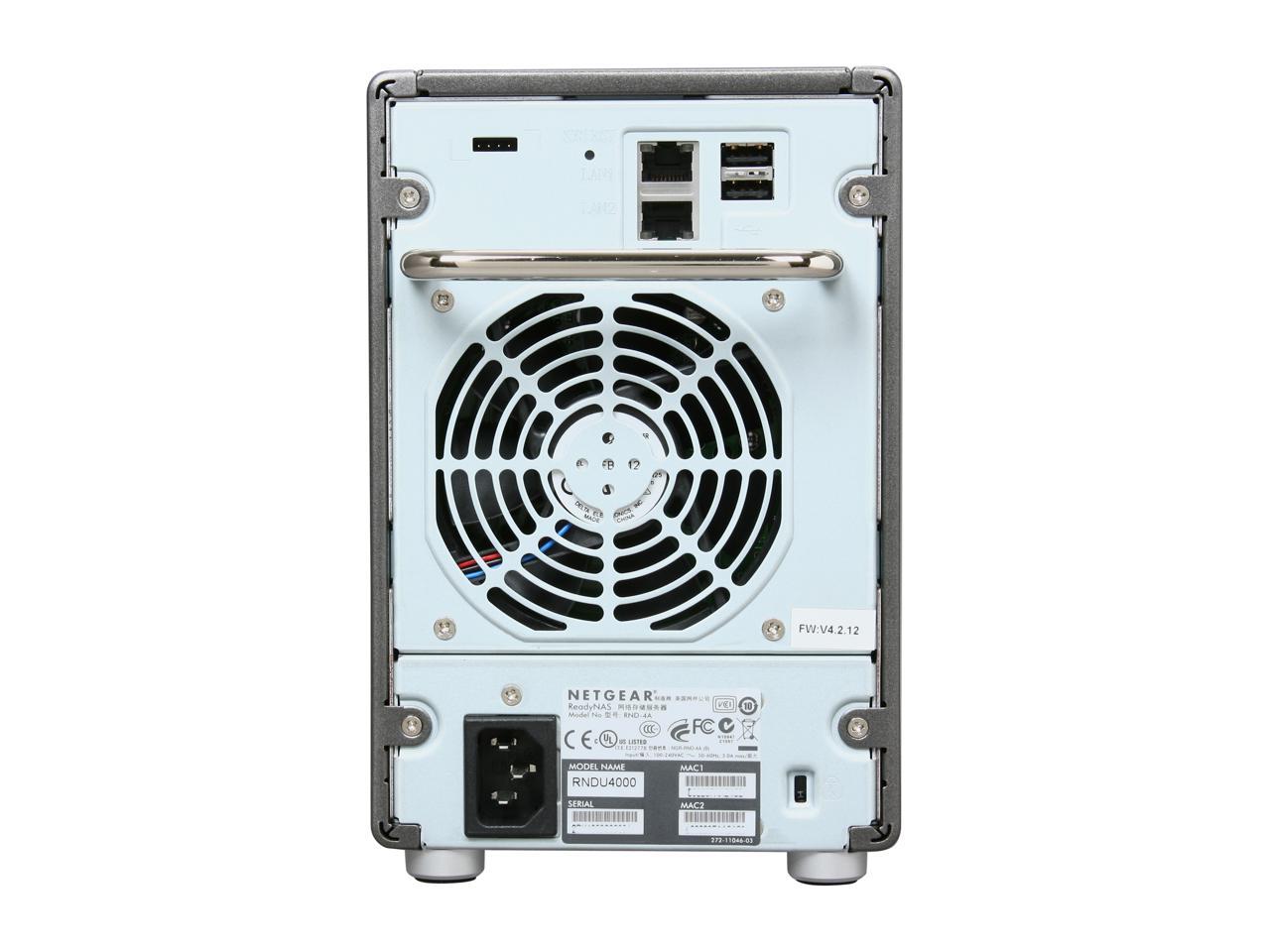 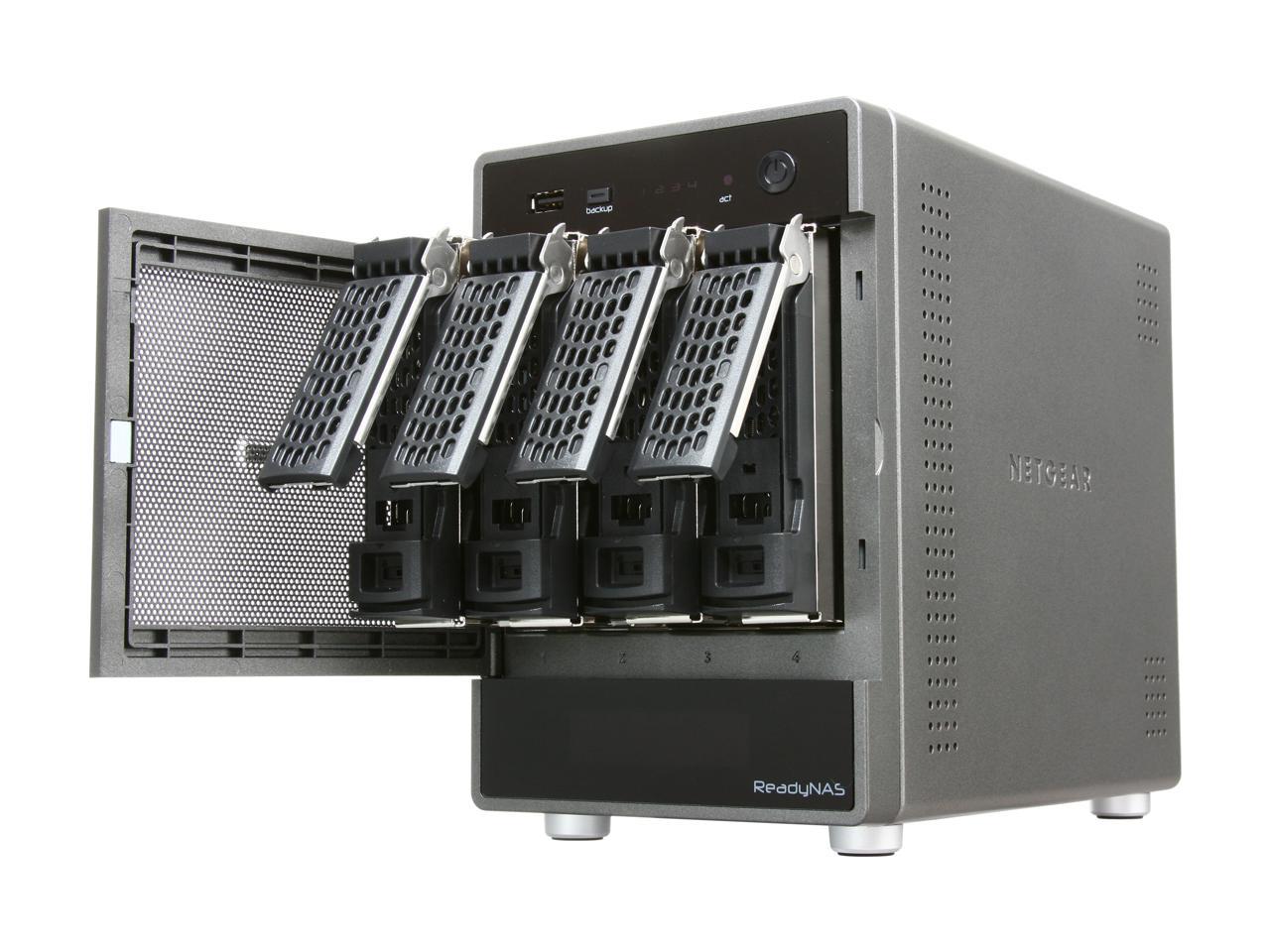 The Netgear RNDU4000 is a diskless NAS storage device that allows you to build the storage capacity you need, when you need it, using compatible hard drives and X-RAID2 automatic volume expansion technology. With X-RAID2, you can expand their volumes on-the-fly simply by adding new hard drives or replacing lower capacity drives with higher ones. The RNDU4000 is Netgear’s newest 4-Bay multimedia desktop storage system with both NAS and iSCSI SAN support. It provides 2X the performance of the current NV+ models (over 80 MB/s), X-RAID2 automatic volume expansion, secure drag-and-drop remote access (ReadyNAS Remote), optional online backup and recovery service (ReadyNAS Vault), and RAID 0/1/5 for data protection. It will also include some new software applications from TiVo, Orb and Skifta.

Pros: This NAS seems to work pretty well, but you have to be sure to have Hard drives on their recommended list. I tried to use 4 x 1.5Tb WD Green drives and it took more that a week to resync, pretty poor performance. Actually, I stopped it after 3 days and a half, it was at 47%. Now, I tested with 2 x Seagate Constellation ES 500Gb drives, those are not on their compatibility list, but they are server graded drives, and it took only one hour to be redundant, so drives matters a lot, avoid Green drives, stay on their list. I bought 2 x 3Tb drives, that are on their list.

Cons: The price, it's high priced compared to others, but then again, maybe it's a better product, we'll see, so far, runs good. At 350$ that would have been a good price, but 550$ is the price of an ok laptop! The admin interface could have been better designed, but that's more a personnal choice, I can't remove an egg for that.

Overall Review: I'm satisfied, I would have preferred a better performance for my WD Green drives (now I have 4 x 1,5Tb Green drives on the shelf...) and the price was high, something around 300$ or 400$ would have been ok, 550$ was high a bit, but if it delivers from what they say, it will be okay since I wanted those features.

Cons: It is advertised with having free backup software, the software you get is Memeo 30 day trail. Don't waste your time installing it. If after reading reviews you decide you want it, uninstall and you will get a coupon for a discount.

Overall Review: Put 3 2-Gig drives in it, figuring to replacing with 3 gigs in the future. It a while to ready all of them, so don't plan to immediately use it.

Pros: -XRaid2 - auto expanding / configuring and hot swappable raid, yes! -Installed one system with one 2TB drive, and one with four 2TB drives. Both worked right out of the box - no drive issues -Streams media to HTPC perfectly **(see Cons)

Cons: -Out of the box I was able to stream standard definition video without issue to the HTPC, however HD streaming stuttered to the point of it being unwatchable. After troubleshooting I was able to correct the issue...

Overall Review: As mentioned above I had issues streaming HD from the NAS. Using the ReadyNAS forums I was given several suggestions to correct the issue, one of which ended up working (changing the NIC driver). Not sure exactly why this fixed the problem as the gig NIC card worked perfectly with other network resources. Fair or not, I am faulting the NAS one egg for this. I shouldn't have to roll back or change the vendor supplied NIC driver to get HD streaming. Not sure if it was a traffic burst issue or an issue with how the NAS handles CIFS sharing (or on htpc issue) but it works perfect now.

Pros: ReadyNAS is the best NAS on the planet! Seriously, they've got this whole thing figured out to extreme simplicity! Setup was super simple and fast! This little box takes care of itself so easily once you have the right settings in place. It starts out with very little turned on, but once you turn on some of the features, it rocks! Fast too!

Cons: I'd love to give this one unit 5 eggs, but it does have some faults. It's small. Too small. So small that it suffers from heat problems, and from disk vibration problems. You MUST have the right disks, or you'll be in a world of hurt with this little unit. I'd much rather see it just a tad bigger and with a 120mm fan instead for more quiet. It's not that loud, but it isn't the quietest NAS I've ever used either. It's very loud on startup, but once running it's not too bad. Just not quiet.

Overall Review: Make sure to READ the instructions. They do lead you to a disk compatibility web page (NO it's not hidden like some other reviewers have said.) I had 4 different discs, 3 were compatible and the 4th the NAS would not even let me use. Good thing from what I understand.

Pros: Dual NIC jumbo frames makes for fast transfers, GUI is very easy, RAIDX-2 makes it easy to expand. I use this as a network share drive with 4/2TB drives (RAIDX-2 makes it 5.4TB. As a media hub I have had no problem and it works GREAT!

Cons: only bad thing is the networking on my LAN but that's my own fault. be sure to enable jumbo frames if you have gig ports on your switch or router.

Overall Review: on a wired LAN its really good, wireless you loose the jumbo frame and it really bogs down for the wireless clients using it.

Pros: Easy set up many many many options Lots of installable plug ins. A NAS and then some. Built in support for Mac's Time Machine (But you do need to 'throw the switch')

Cons: a Cat-5 cable? Really? ... but transfers seem a bit slowish even with a cat5e, so I suspect there's something else at play here. Not enough to worry about, but it's not blazing fast.

Overall Review: Do pay attention to the compatability charts! I was expecting network attached storage. This box is actually a lightweight *nix server and lays it out there for you. There's plenty of plugins available and this can even be set up as a web server. I was kind of expecting it would run some flavor of Linux under the hood, I was *not* expecting them to expose that so well. Just a note: enabling shell logins will void support, so know what you're getting into.

Cons: Upon the initial power-up, the unit didn't grab a working IP address from my network's DHCP server. Instead, I had to connect a crossover cable between the NAS and a laptop set to the NAS's default subnet to get into Frontview. The first unit I received had a defective power button that intermittently connected. It took me a week to figure out why the unit was randomly powering off. The exchanged unit works fine. -1 star for this.

Overall Review: I am new to the world of NAS, but this has been a good introduction. I am very satisfied with the level of configurability of this unit and its supported services, although it took some reading of ReadyNAS forum articles to learn what this thing can do. Its main role in my home network is to stream music to a Sonos player and movies to a Boxee Box. I haven't gotten that set up yet (as I'm still loading files and configuring backups), but everything is working well so far. BTW, the LED display is something that turns out to be very handy, especially to tell you what is going on (i.e. to wait) while the device is booting, formatting drives, etc. and Frontview cannot be accessed.

Pros: It does everything I need it to, and handles it pretty well. With WD20EARS disks with the park/LLC values changed, and the box upgraded to support 4k sectors if performs admirably, especially for such a small box that consumes so little power.

Overall Review: I only wish I had purchased a unit that would hold more disks.