Purchases from these Sellers are generally covered under our Newegg Marketplace Guarantee.
72 Ratings (69% Positive)
Shipped by Newegg
Sold by: 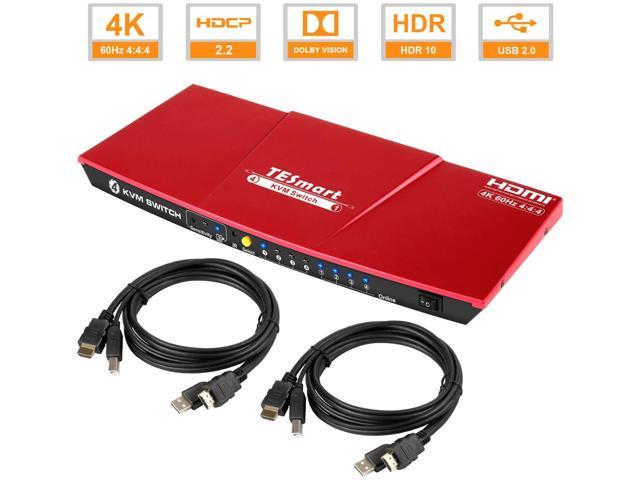 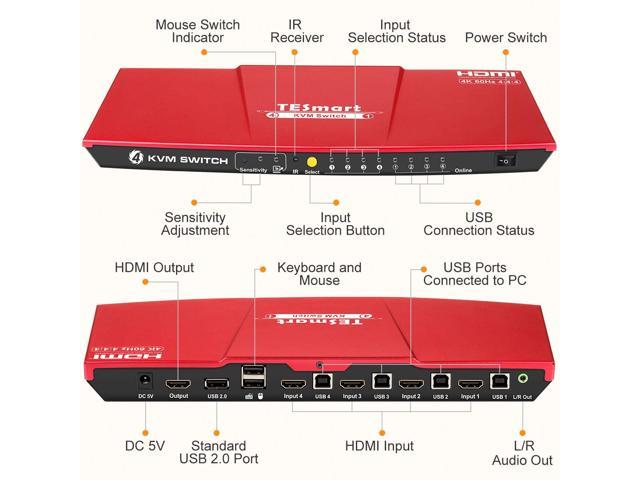 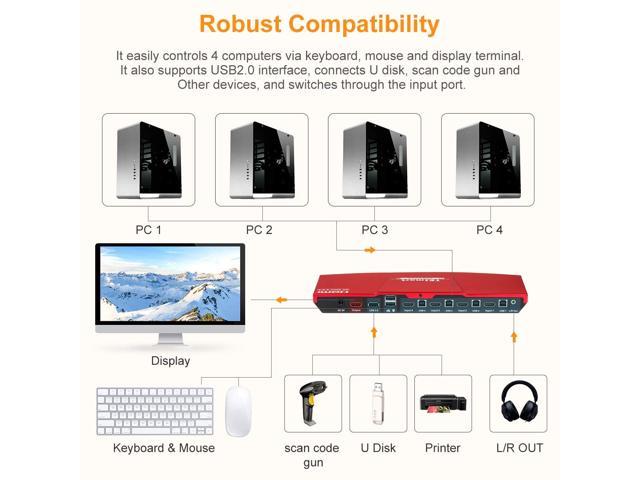 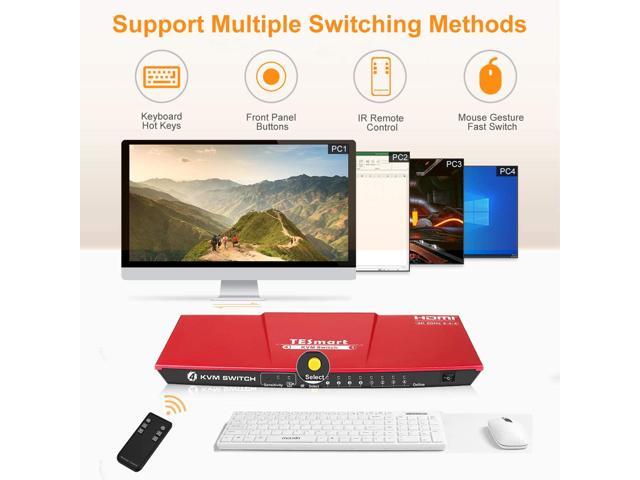 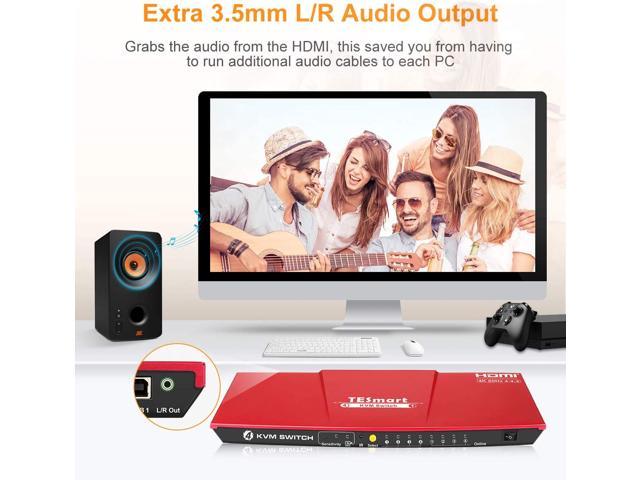 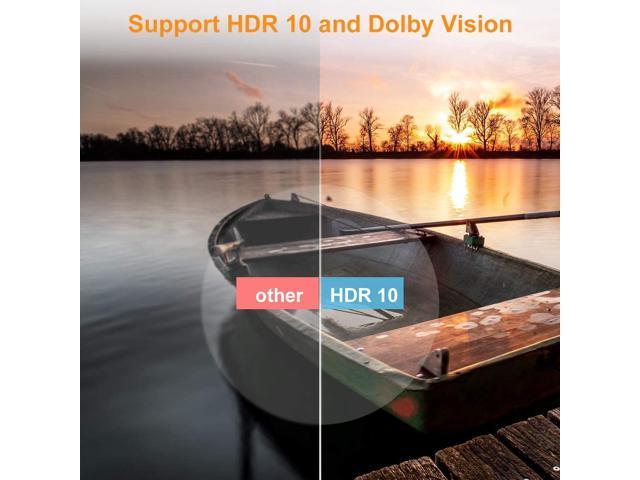 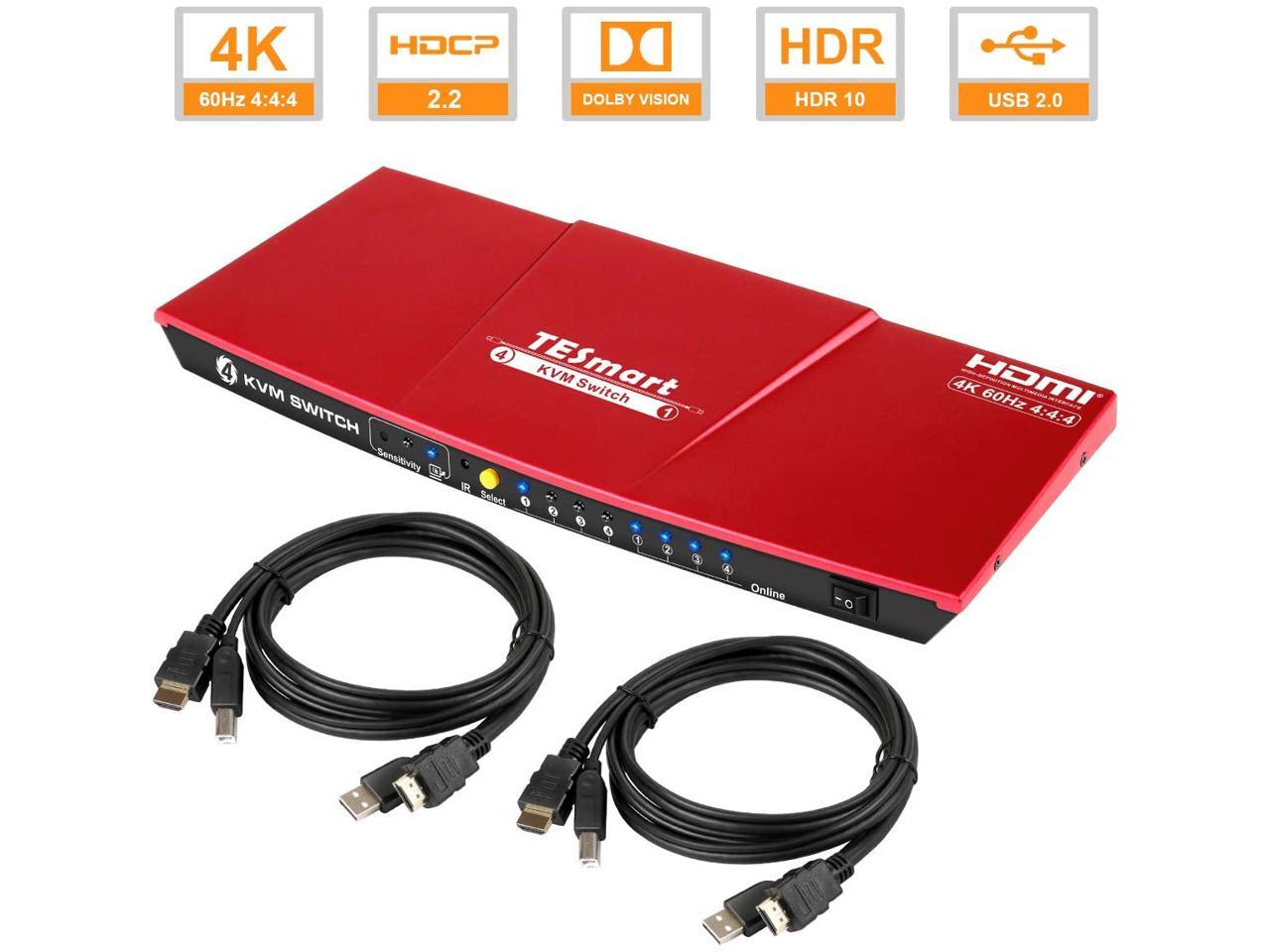 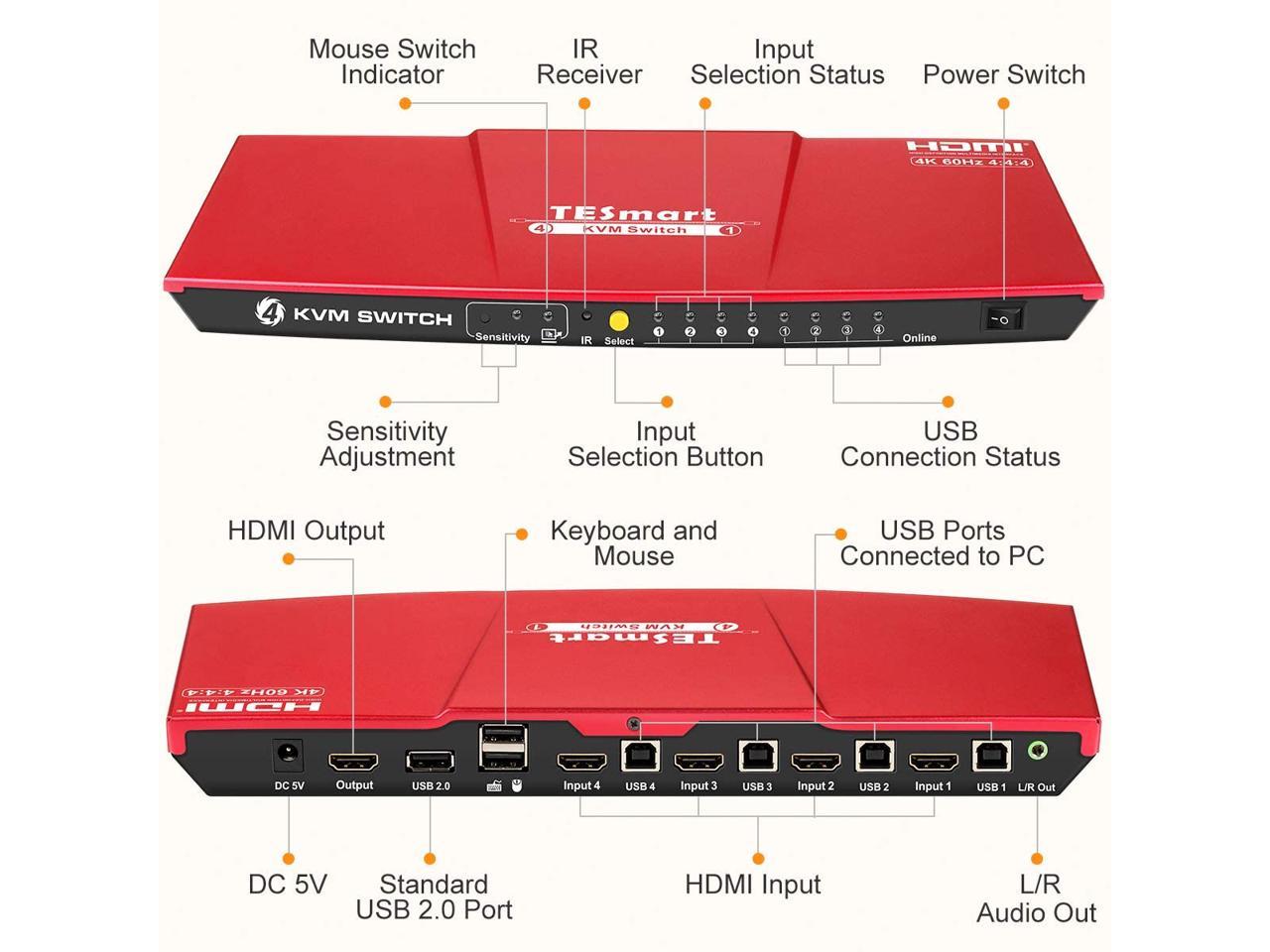 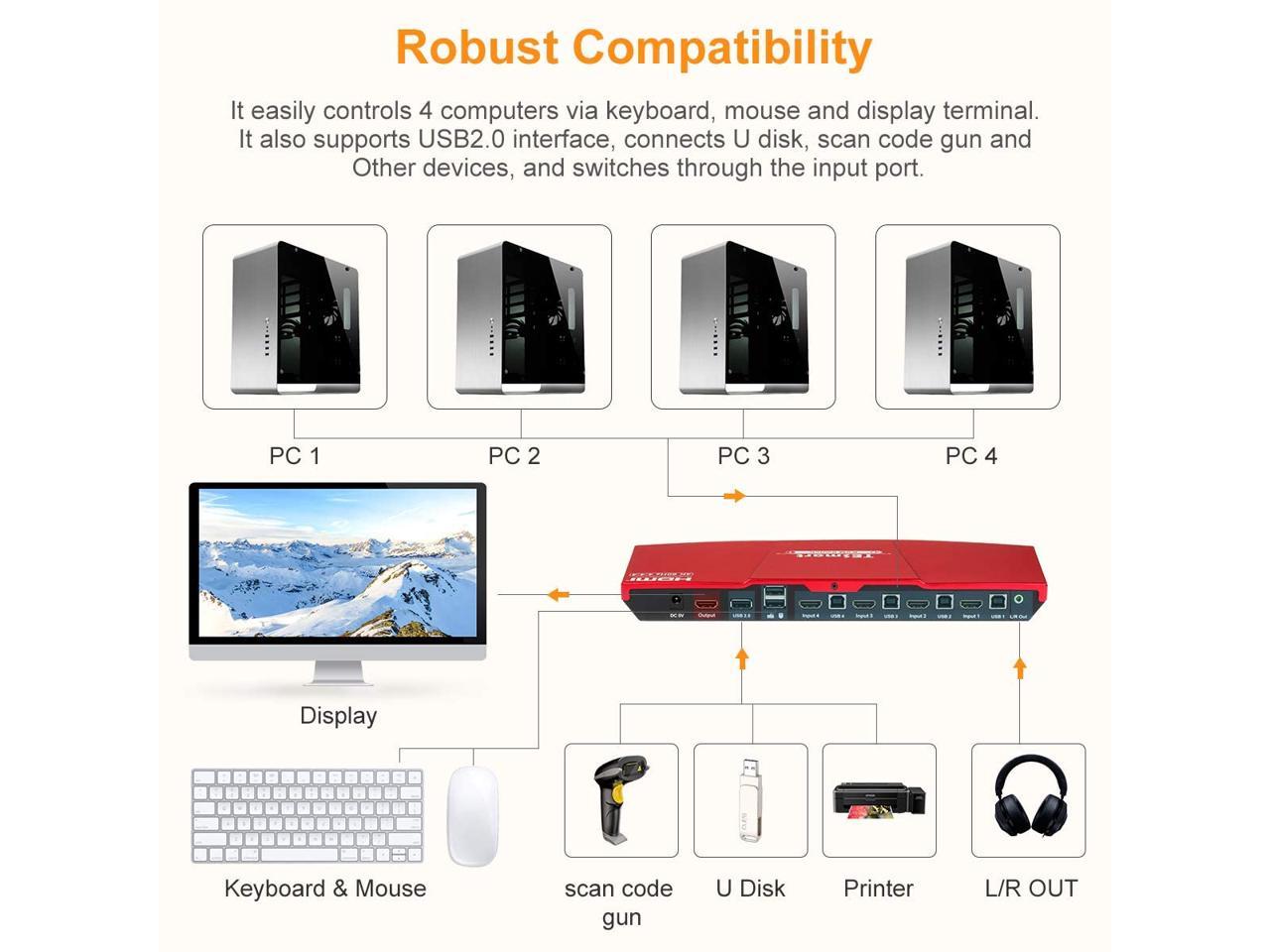 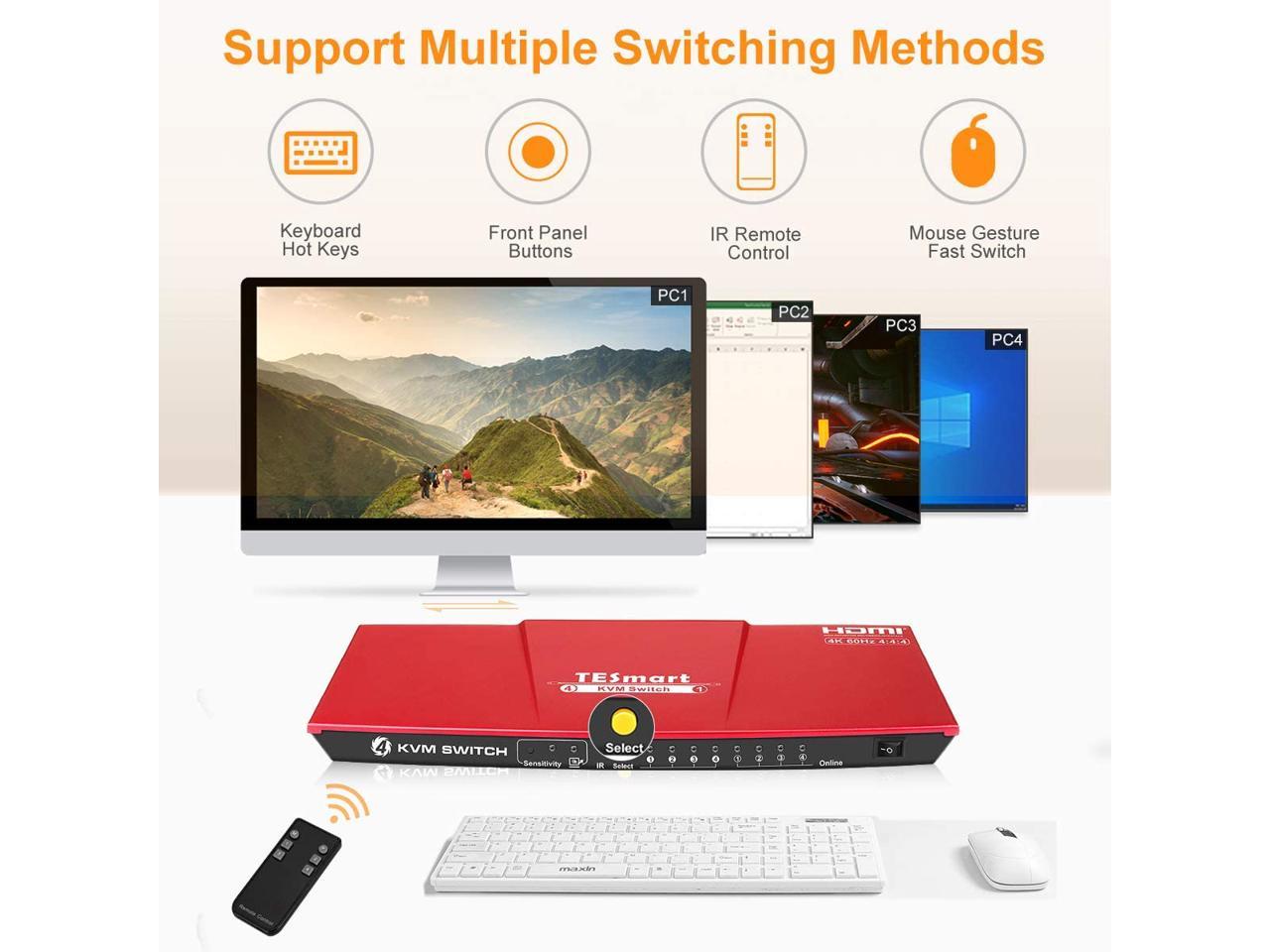 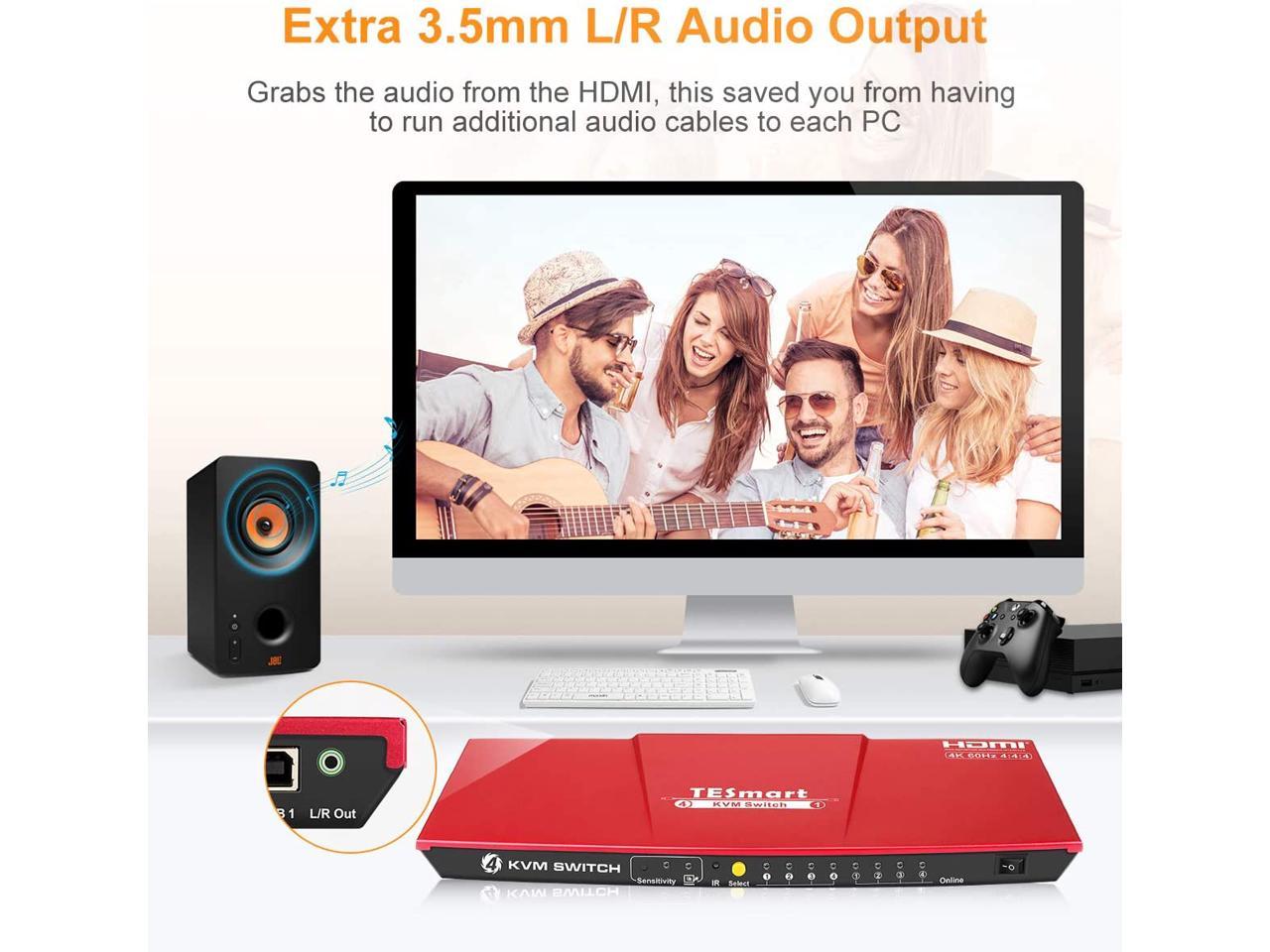 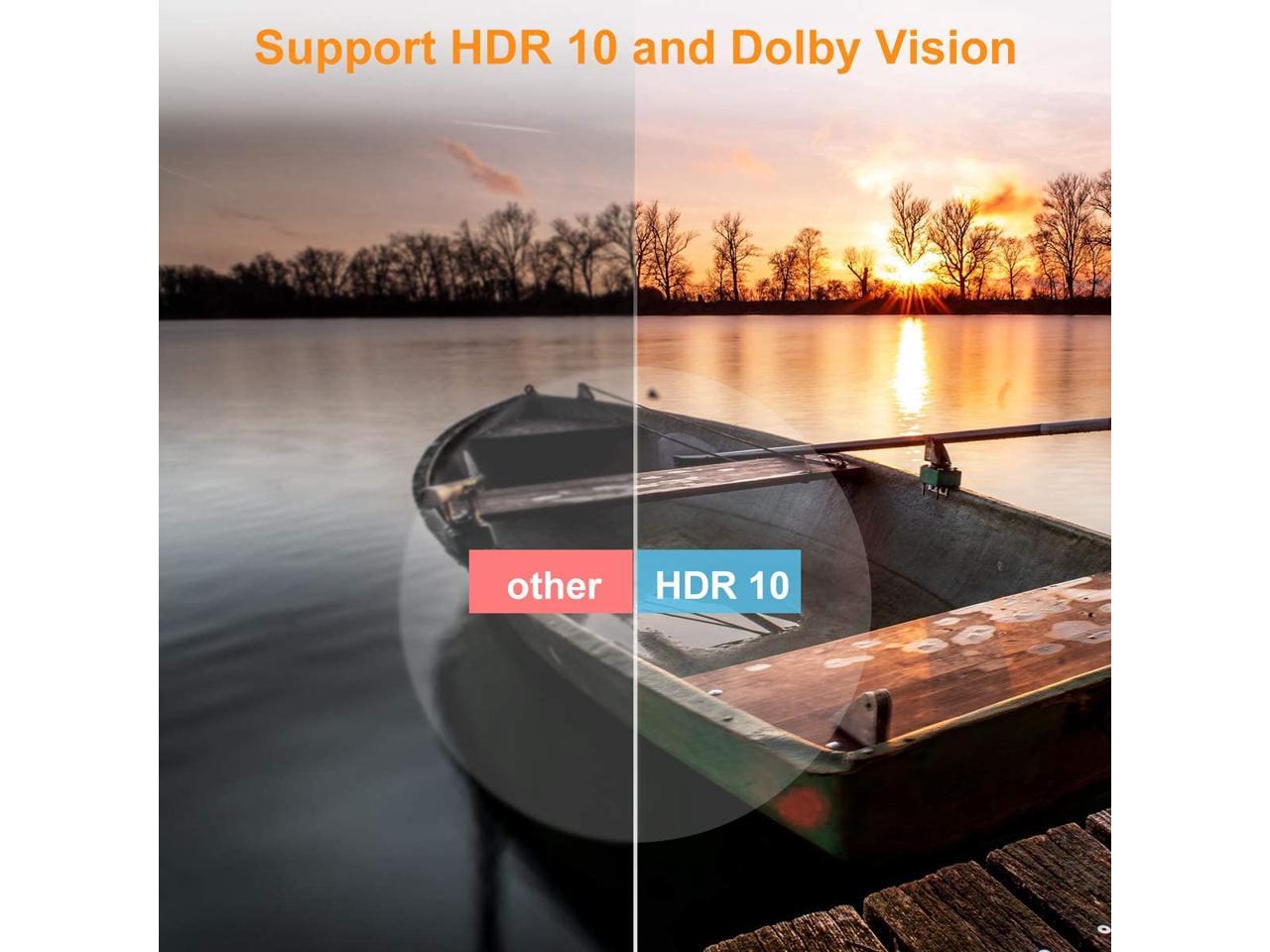 Separate 3.5 mm stereo audio,ensure an uninterrupted audio experience, even when switching between computers. Protects the inside and keeps the unit cool by aiding in quick heat absorption and dissipation. *The Keyboard & Mouse USB ports can not compatible with:
Some mechanical keyboard,
Bluetooth wireless keyboard & mouse,
Multimedia keys in the multimedia keyboard,
Keyboard with custom key functions,
Keyboards with USB Hub.
*Please make sure the cable you are using does not exceed 10ft.
*Please Install CR2025 Battery Before Use Remote Control.

Pros: - Fast switching - Doesn't confuse the computers when you switch between them - Ability to change inputs with hotkeys and mouse gestures is nice - Speaker port that grabs the audio from the HDMI is nice

Cons: - Be aware that the switch presents a bog standard USB keyboard to the PCs. If you have a multimedia or gaming keyboard, many of the keys won't work, or the keyboard won't work at all. I assume it needs to do this so that it can capture the keystrokes that trigger the switching. It would have been nice if the feature could be disabled.

Pros: - It works more reliably than my old IOGear 2-port KVM - Works with higher resolutions (I have 2560x1080 resolution which my old KVM didn't reliably support; to be fair it was only rated to 1920x1080) - 4 Ports - Additional USB port on the switch (I use this to connect my external webcam to all my computers and it has never failed to switch the webcam) - HDMI audio pass through to the line out (I love this feature and it ensures that I can send audio to my speakers from all the devices without a ton of extra audio cables) - Not a pro, but worth mentioning that I never noticed any latency on my connected devices (however, I do not game with these computers)

Cons: - RANDOM CLICKS on the mouse (every once in a while -- 30 - 90 seconds -- there's a random mouseclick even when my hands are not on the mouse at all, this mostly happens when there's no activity on the computer, like if I'm on a Zoom meeting and just listening, or I'm reading a long email) - Occasionally misses key presses on the keyboard (not too often, but it clearly happens, I'm a developer so I'm typing a lot and sometimes I see letters not appear, I use a solid mechanical keyboard so I definitely know when I've pressed a key) - Very rarely fails to pick up the video on my Macbook Pro after switching. The Macbook is connected via a USB mini-dock. Unplugging the doc and plugging it back in fixes the problem and it never happens when switching to my Windows laptop, Windows desktop, or my Microsoft Surface (before the Surface died; unrelated). I suspect this is more a problem with the USB hub/dock more than the KVM, but I wanted to mention in case others experience it - KVM cables are a bit on the short side - if you need a 4 port KVM odds are fair that your devices aren't all going to be within 3-4 feet of the switch, I have two laptops on my desk about 3 feet from the KVM and the provided cords barely reach - Only 2 KVM cords - if you buy a 4-port switch you probably need more than 2 cables (or else you would have bought a 2-port switch)

Overall Review: EDIT: There are two major issues that at first seemed mildly annoying but are, after time, deal-breakers. 1. RANDOM MOUSE CLICKS: at random intervals, the KVM sends mouse clicks that are not being pressed (for sure, I can just stand in front of my computer and watch the mouse click randomly about once every minute or so). For some reason, it seems to be the middle and right mouse buttons mostly (that may be because they have the most obvious effect in most situations, like bringing up menus and mouse scrolling). At first, I thought I could live with this, but as time has gone it is driving me crazy. 2. EXTRA/INCORRECT KEYPRESSES: as a programmer, I'm typing a lot, and spell check and the like don't always help due to the nature of how and what I'm typing. Sometimes in the middle of my words, I will find extra letters. Mostly it's the "l" that just shows up randomly when I'm typing. It doesn't matter what letters I have been typing. for example, I might find "here" spelled "hlere". It's not as common as the phantom mouse clicks, but it happens more than I like and has caused more than a few failed builds until I go back and find the oddly spelled words. With this issue, I would never recommend this device to anyone. I hope that I just have a faulty one, but I would purchase with caution. On a positive note, I haven't seen any of the originally mentioned video issues in quite a while so that must have been something related to my USB hub and my Macbook, or maybe that Dell computer that I no longer use (I'm using a Microsoft Surface Pro 7 in place of the Dell). ORIGINAL: I certainly found this to be a more reliable and feature-rich KVM than my old IOGear switch and appreciate the extra features like the remote and extra USB connection. Other than the occasional random clicks which can genuinely be annoying, I have been really happy with the KVM. I love the HDMI audio pass-through and extra USB port. If the random clicks went away it would have gotten 5 stars. If there were 4 cables (and at least 2 of them were 6' or better yet 10') and the occasional missed keypress issue went away, this would be a nearly perfect KVM. To be clear: Random Clicks happens at least every few minutes of inactivity Missed keypresses happen maybe 1 in 1000 or more keypresses (so not that often, about 3 times writing this review) Video issue seems to be random and only about once in 20 switches, maybe 1 in 100 (likely a USB hub issue as it's a KVM to a hub to the Macbook) I'm happy with this device. Rating 4/5 stars/eggs Equipment: Computer 1: Dell Laptop running Windows 10, integrated graphics Computer 2: Custom built PC running Windows 10, AMD RX 480 Computer 3: Macbook Pro 2018 running Catalina, Radeon Pro 560x graphics Monitor: LG 34" Ultrawide 2560x1080 Keyboard: Logitech G613 wireless mechanical keyboard using a USB receiver to connect Mouse: Logitech G502 Prometheus gaming mouse Extra USB device: Logitech Webcam C920 HD Pro Line Out Audio: connected to a Dell 2.1 speaker setup

Pros: * Nicely designed, no obnoxious LEDs on the front of the unit, relatively small, has a metal casing, not flimsy at all; * Everything plugs into the back of the case, unlike many other KVMs (except for the stereo output plug); * Comes with about 5' of cables to connect up to each of the computers; * Many options for switching between computers (via IR control, front panel button, mouse, and/or keyboard shortcuts. * What else can I say, it works great and I'm very happy with the purchase!

Cons: * I'd like to see the stereo output port also placed on the back of the unit (very minor con) as I utilize that port; * I'd also like to have the option to connect up each computers' stereo outputs to the KVM, rather than simply using the HDMI extracted stereo output on the KVM. I mention this because of some limitations that I've noticed with respect to audio capabilities when utilizing the HDMI extracted stereo via the KVM when switching between two (very) different computers. It would be really a nice feature to have both options available. Not really a con, but a much desired feature.

Overall Review: I'd highly recommend this KVM Switch to others! Very well built with no problems whatsoever encountered in over a month of use. If you're looking for a sharp KVM (for two or four) computers, this is definitely the one to buy.

Overall Review: I had purchased this KVM to use for a win7 PC and a raspberry pi. On the initial startup I immediately noticed the win7 screen was not as sharp as before and the colors were different. The desktop was also bigger than my monitor so the task bar was cut off. My keyboard, Logitech G710 also wasn't working I had to log in with the virtual keyboard. I started troubleshooting by checking all the cables but a few minutes later even the mouse, a Logitech G9x had also stopped working. I power cycled everything but it didn't make a difference, still poor video and no keyboard or mouse on both channels. I'm not sure if the KVM was failing or it was a compatibility issue.

Pros: This switch replaces an IOGEAR 4 port VGA/USB switch that still works. The new monitor I bought does not have a VGA socket on the back. This KVM switch is easy to install and easy to use.

Cons: This product only came with 2 pairs of cables. I had extra cables available but would not have been happy to have had to go out to buy 2 more pairs. Also, the cables are a bit short, so all your machines have to be grouped close together.

Overall Review: I would recommend this product to anyone who needs a 4 port KVM switch. I got it from Newegg at a sale price. The cost would have been considerably more if I had to buy a similar 4 port KVM Switch from IOGEAR or TESmart.

Cons: Cannot Change HotkeyLongevity -- Failed after less than one year

Overall Review: While the product was working, I was extremely happy with it. This KVM switched quickly and accurately. The KVM failed after less than one year, it still passed video, but both the keyboard and mouse inputs ceased to function. This manufacturer offers zero warranty on their product, which I should have noted as an extreme red flag. Given the manufacturer's (lack of) warranty, I can conclude that they know their products do not last. I have switched to an IOGear.

Pros: Very simple to set up and operate, didn't even need the instructions. Has been working great for a couple of months, just in time to cover working from home now.

Overall Review: Easy to use, perfectly reliable so far.

Overall Review: It didn't work for me. Switching between monitors only worked every second or third time, and was very slow when it did work. I have two 2560x1440 Asus monitors and a Mac and a PC. I wanted to switch between my usual setup: both monitors on the Mac, and, when I use the PC: one monitor on each computer. I don't know for sure where the problem is; it could be one or both of the computers or the monitors, as well as the possibility that the KVM switch isn't up for the task. It might work for your setup, so give it a try if you think it is the right KVM. Newegg was good about the return.