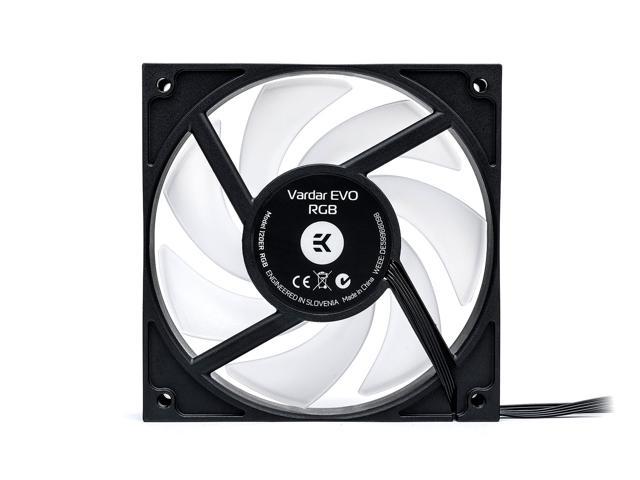 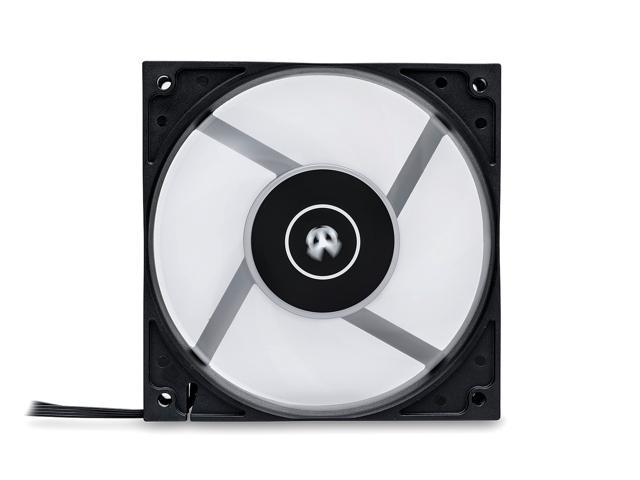 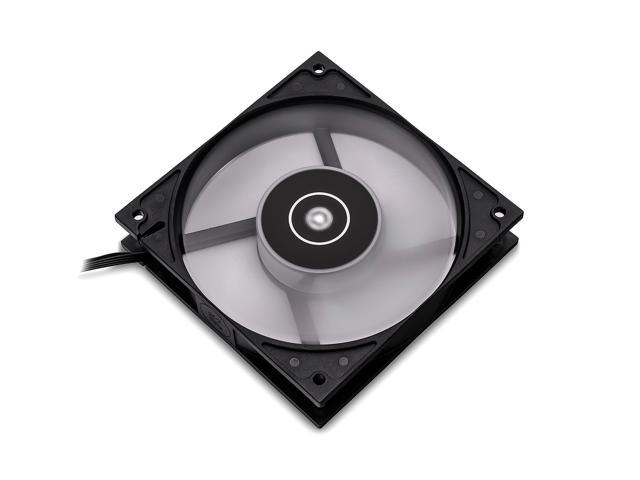 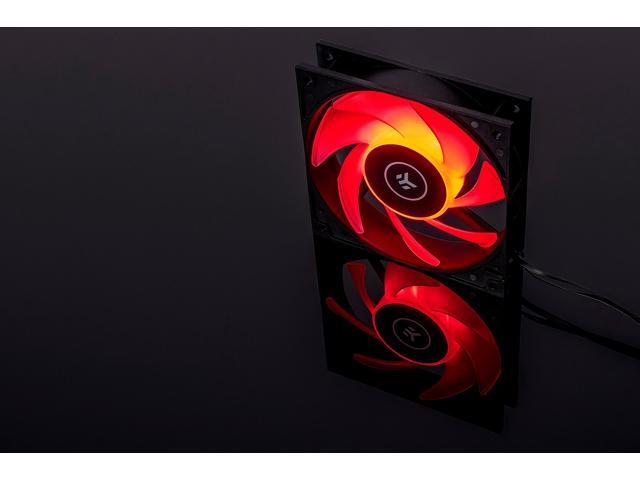 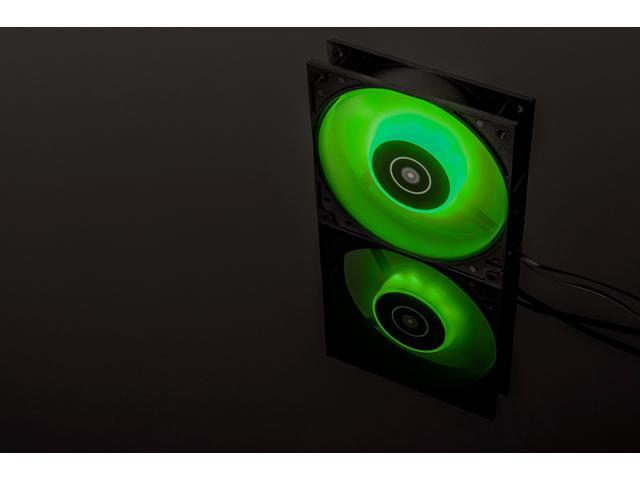 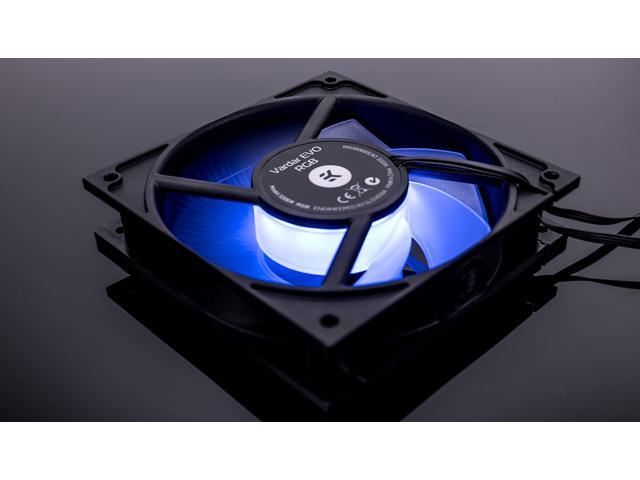 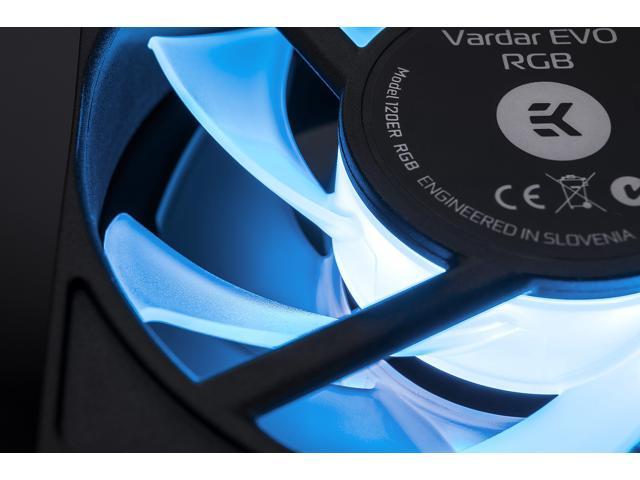 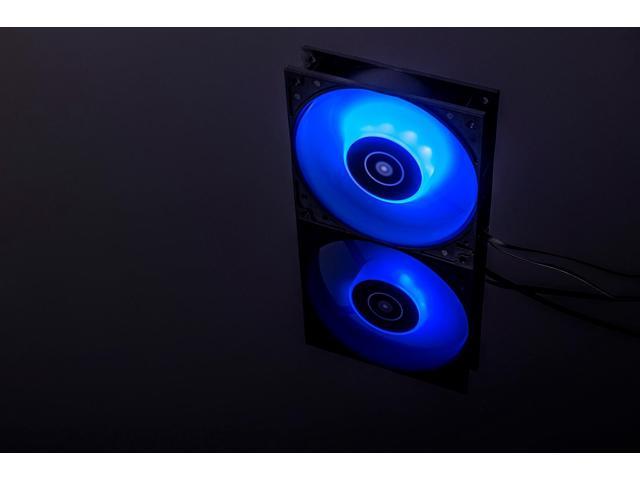 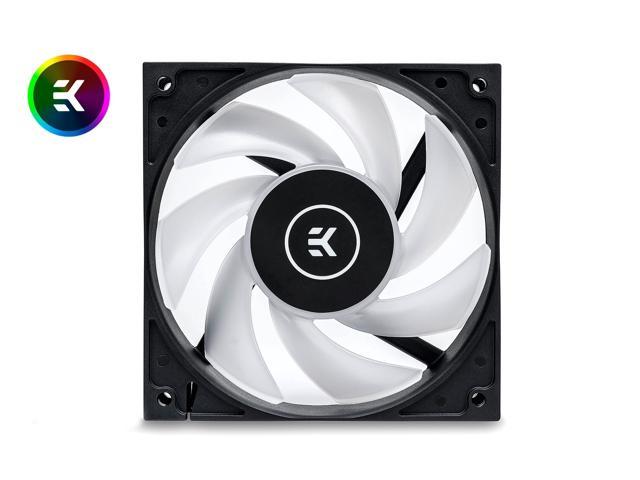 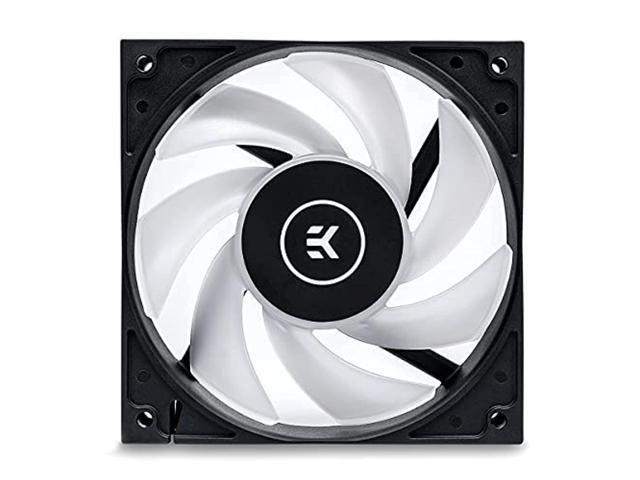 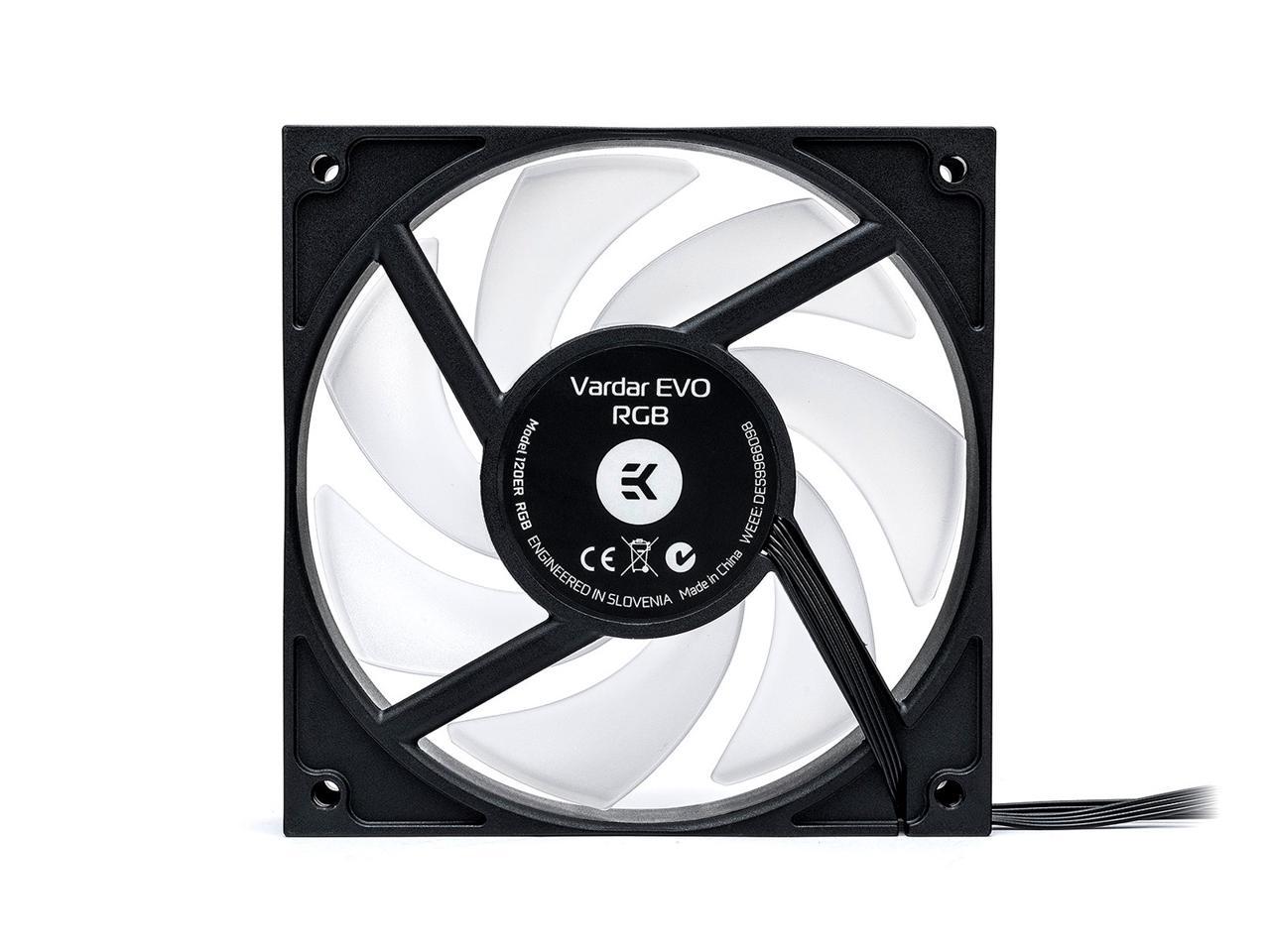 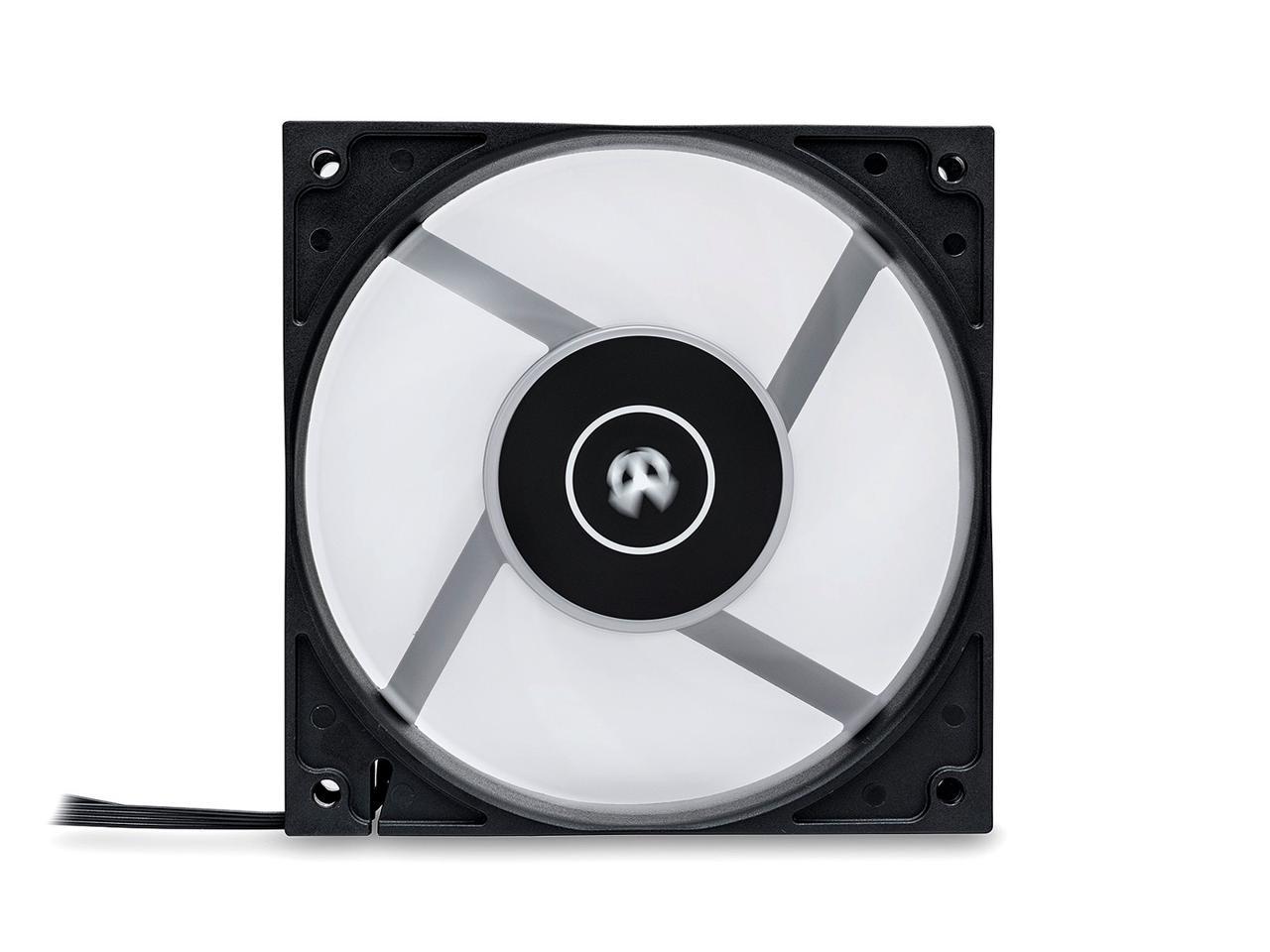 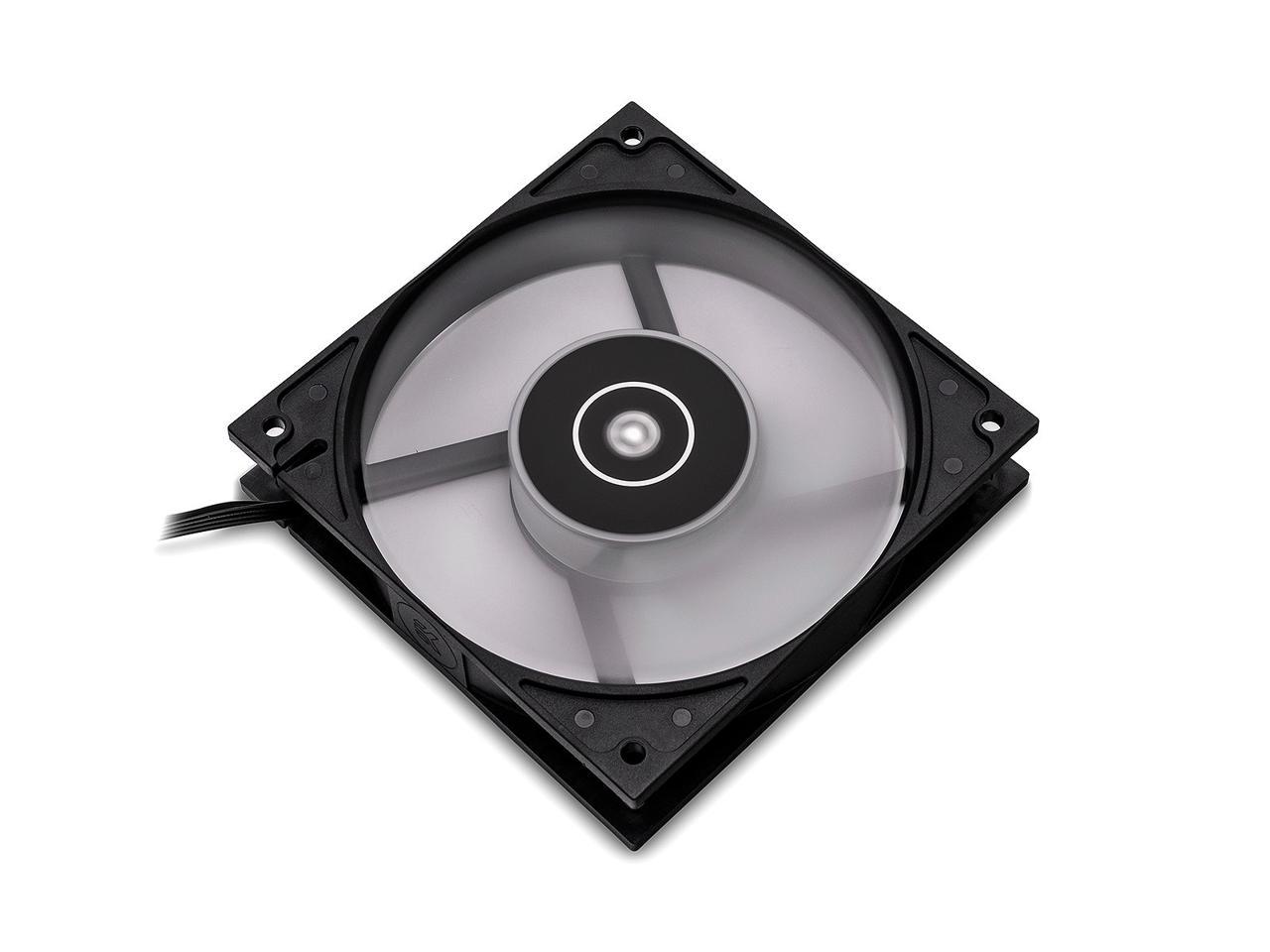 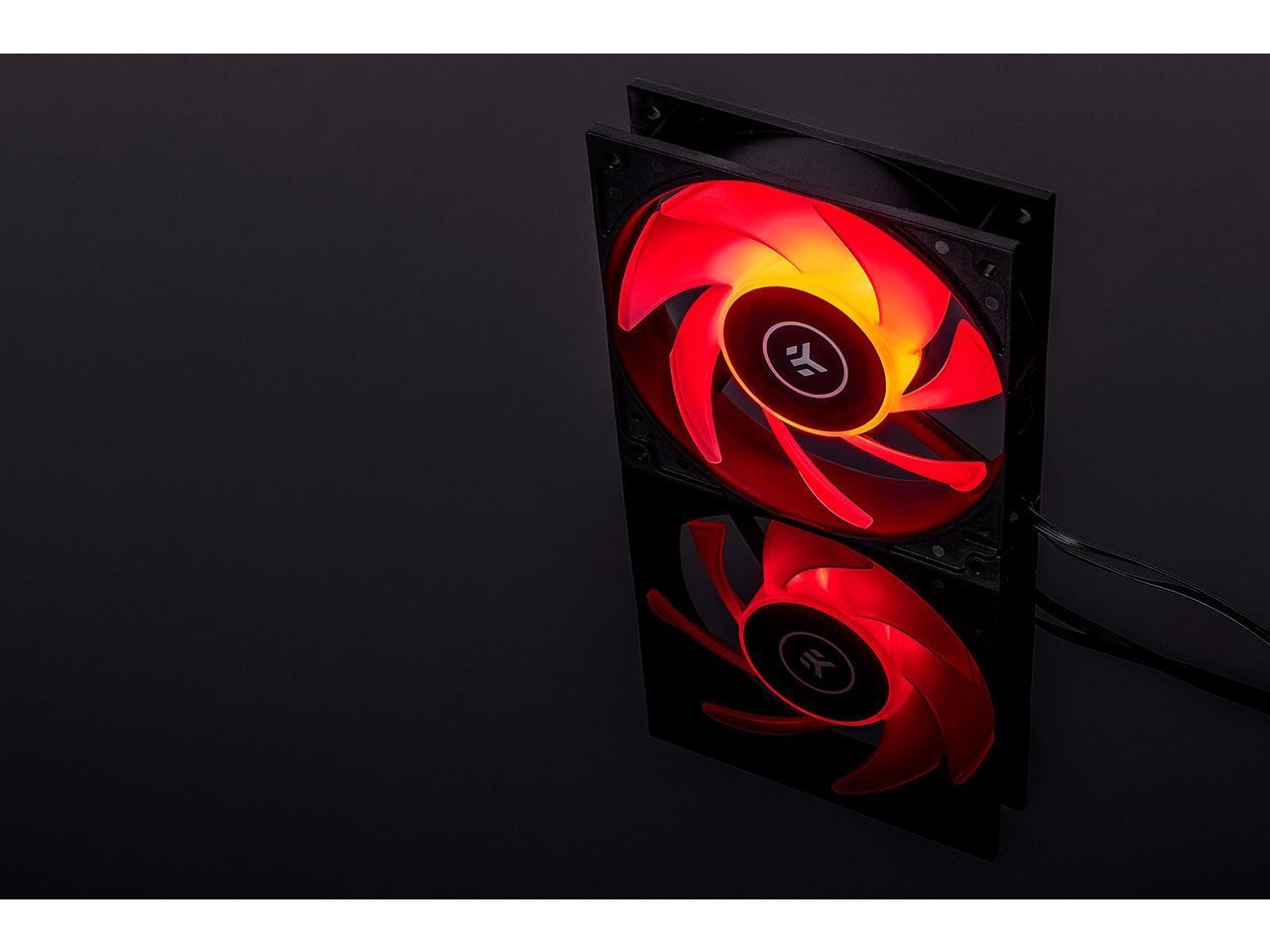 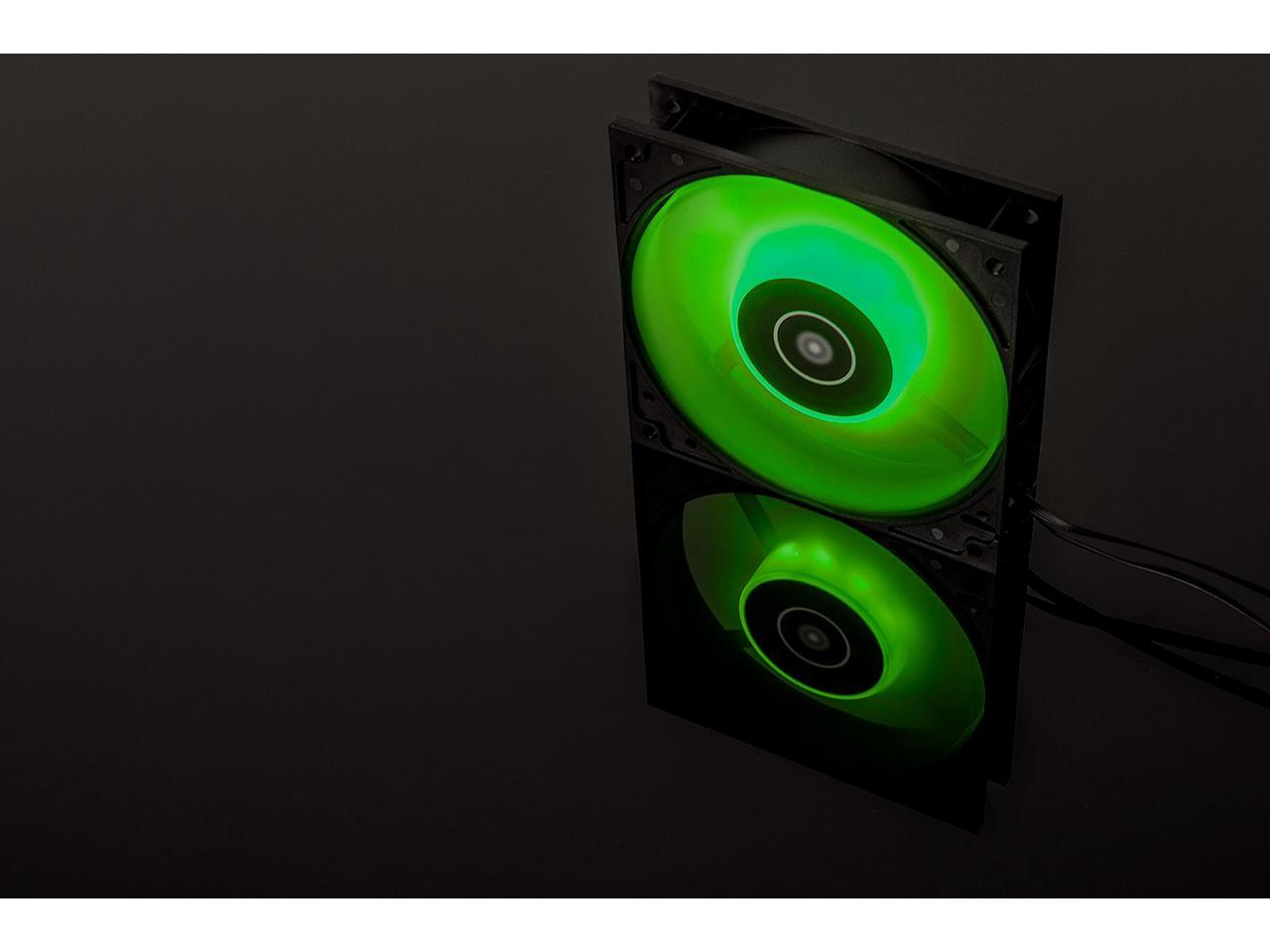 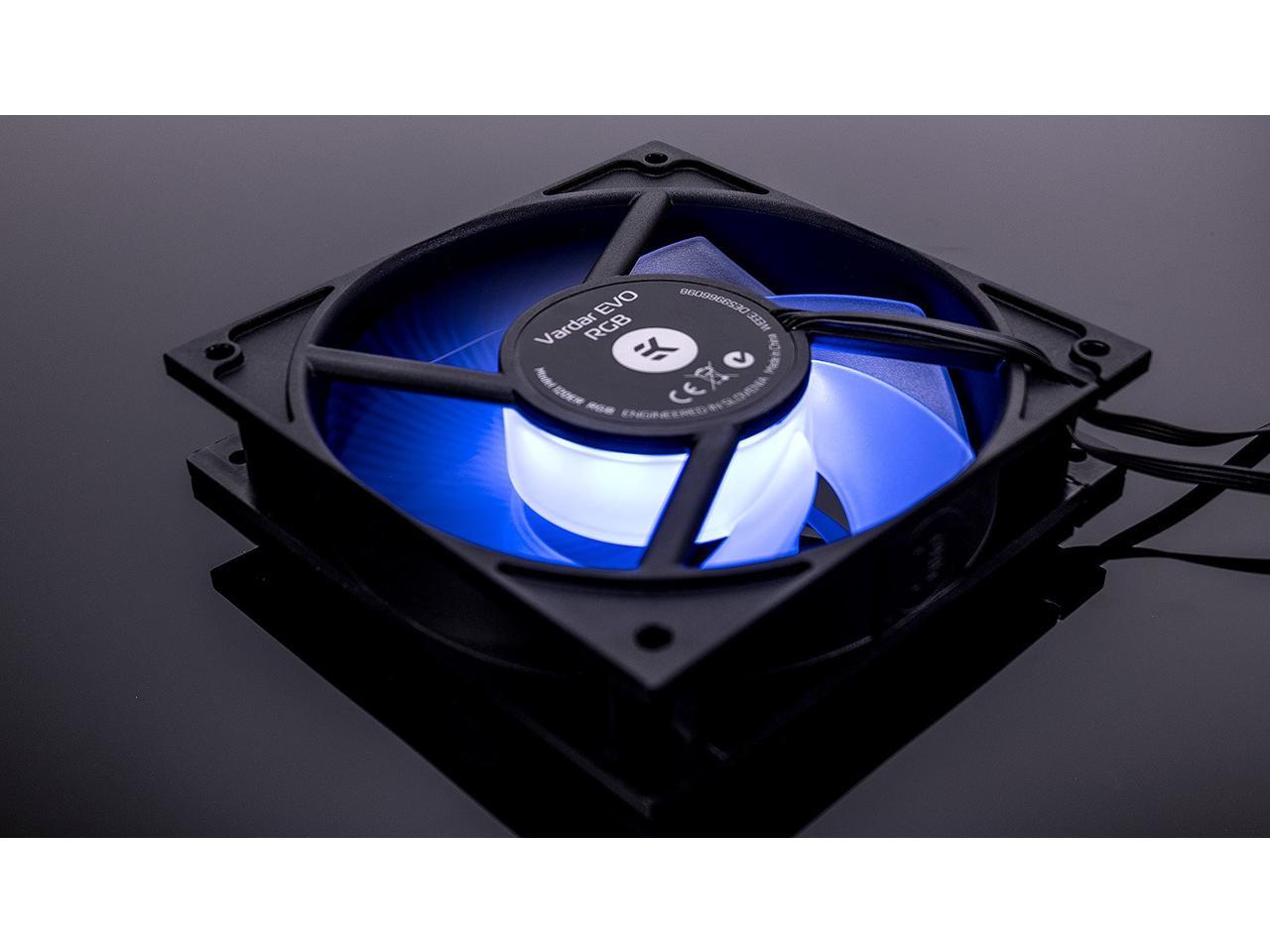 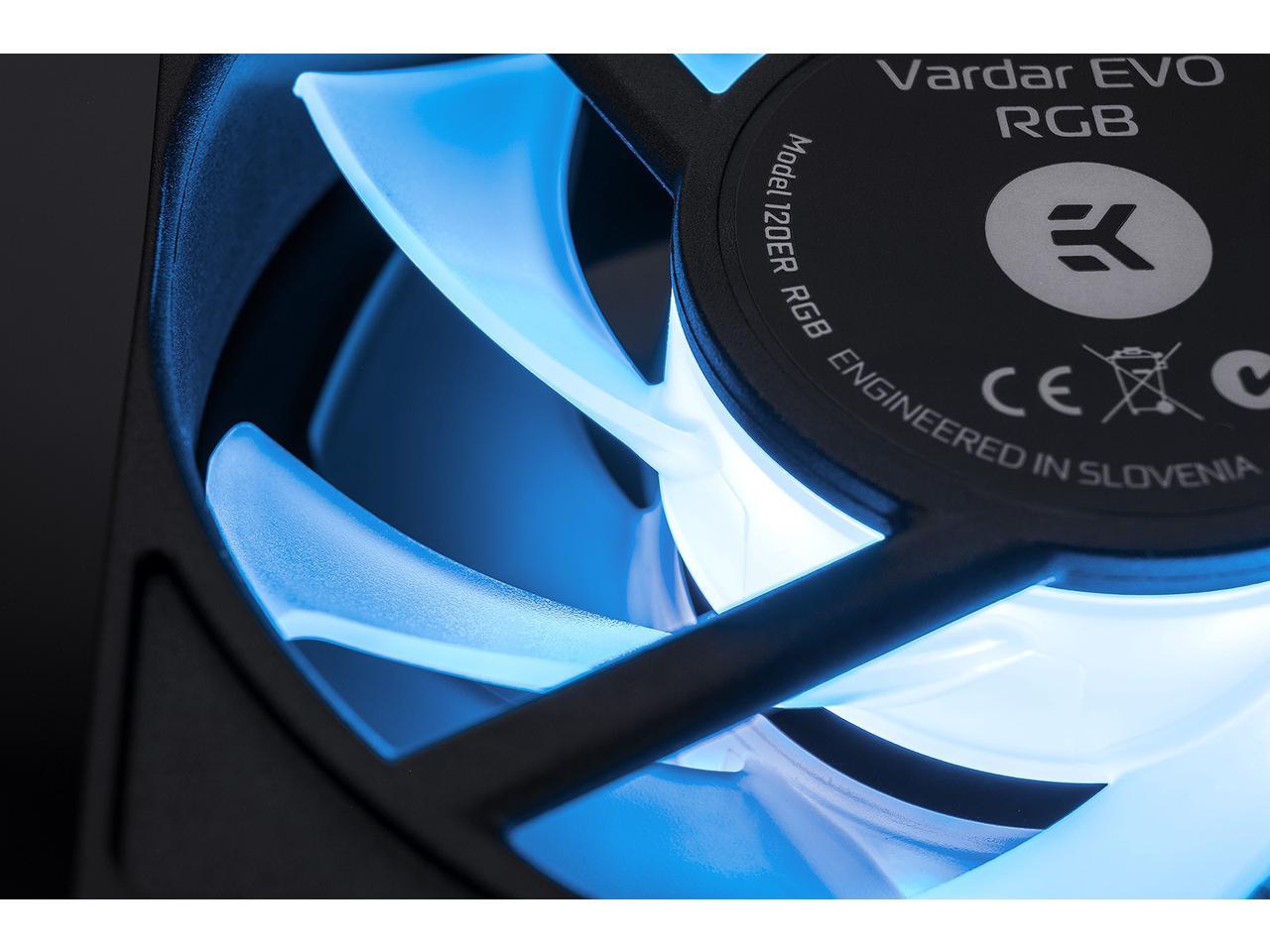 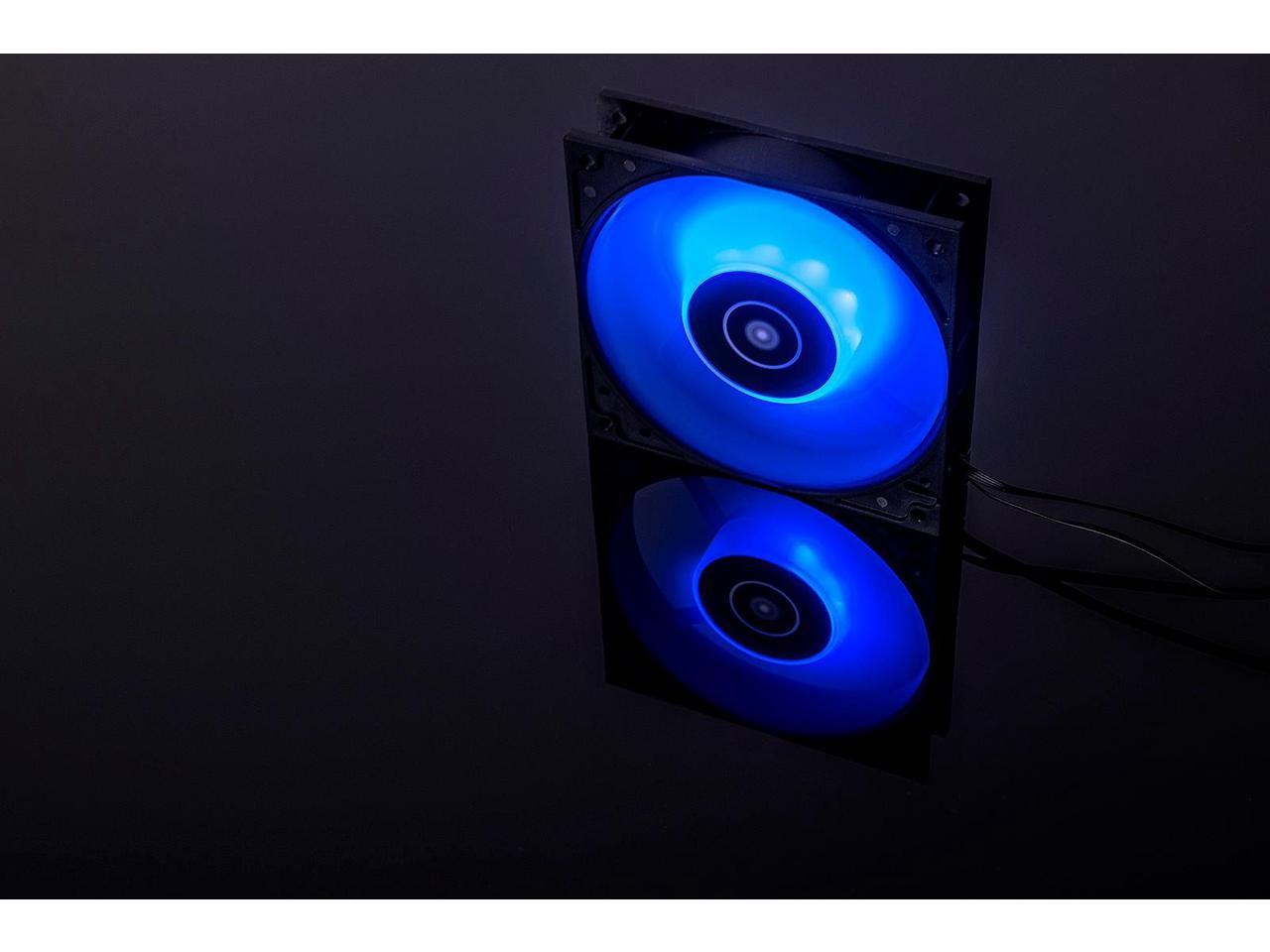 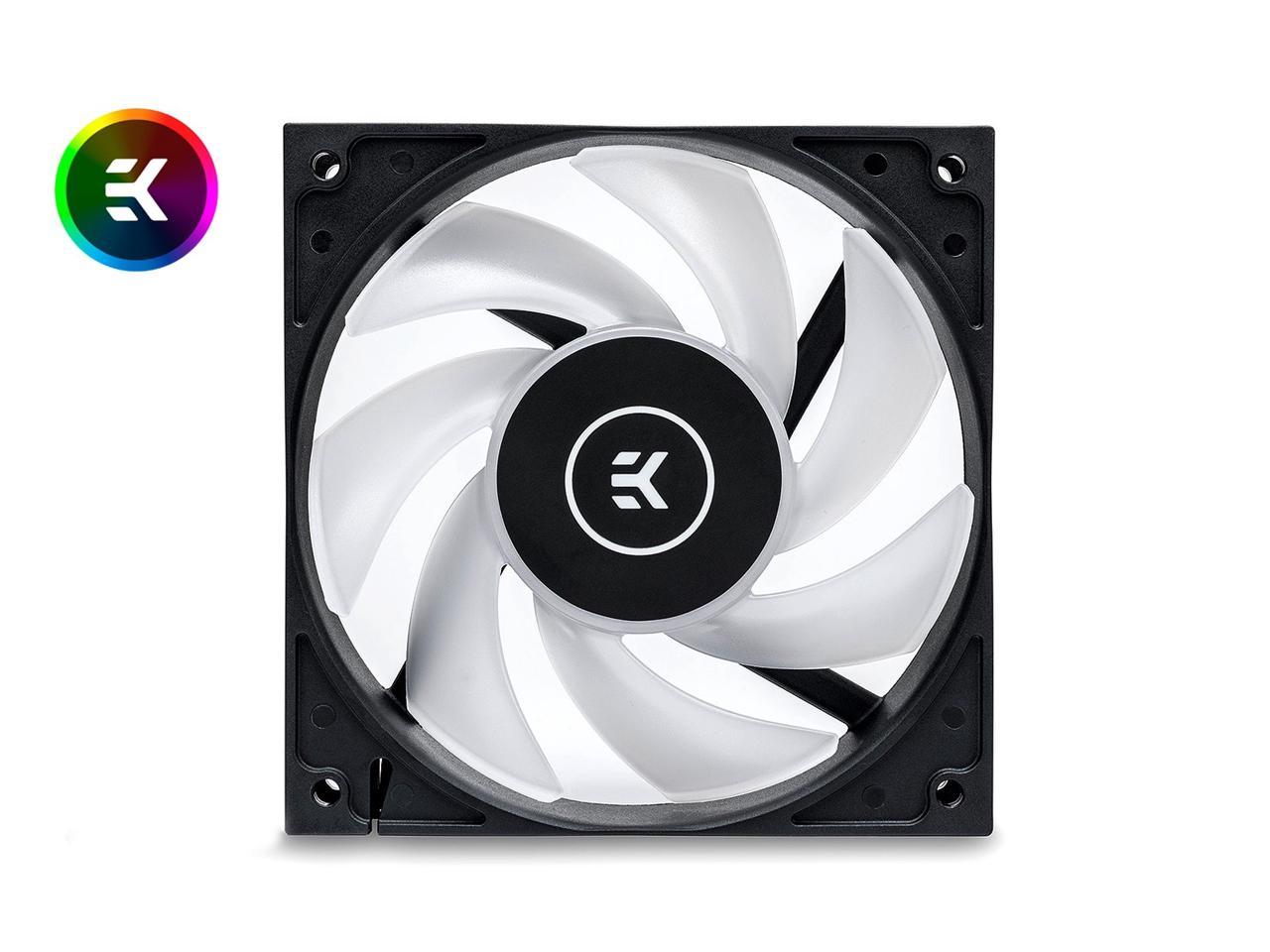 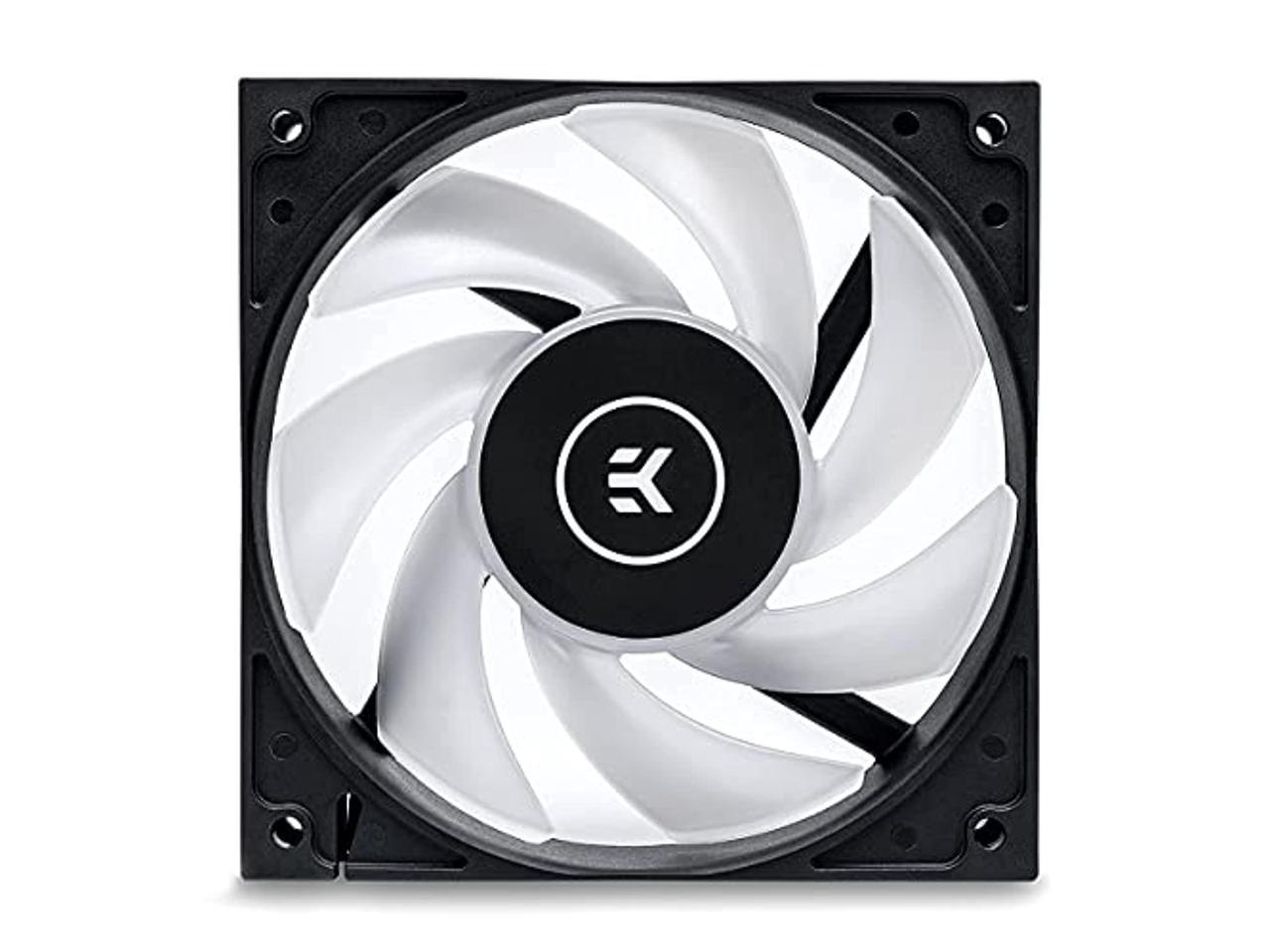 (12) Write a Review
See more "ek vardar"
In stock.
Ships from United States.
Choking Hazard Small parts. Not for children under 3 years.
Overview
Specs
Reviews
The EK-Vardar EVO 120ER RGB is a high-static pressure computer cooling fan, designed and built primarily for highest-performance computer liquid cooling systems. Developed in-house and first introduced in 2014, the EK-Vardar fan is now also available as EK-Vardar EVO 120ER RGB. Beside the RGB lighting effect, the new fan also packs the Extended Range (ER) of PWM operation feature and the special Start-Stop function which brings a true 0dB experience for the absolute silent fan operation. EK-Vardar EVO 120ER RGB is simply the best choice of RGB fan for computer radiator cooling as it provides unmatched performance throughout the entire operating range. The perfectly balanced milky colored 7 fan blade design is optimized for light dispersion and high-pressure operation while maintaining the low noise profile throughout the whole operation range of the fan. Under the motor hub, there are total 9 LEDs making this the brightest RGB fan on the market, ensuring perfect light diffusion at broad daylight as well. One of the key features of the EK-Vardar RGB fans is its simplicity as it uses standard 4-pin 12V RGB connectivity. Meaning it can be used with any standard 4-pin 12V RGB controller or any of popular RGB sync technologies from all major motherboard manufacturers. The arrow marking on the 4-pin LED connector is to be aligned with the +12V marking on the RGB header. The Vardar family of cooling fans carries the notorious name of a type of the cold northwesterly wind blowing from the mountains down to the valleys of Macedonia. It is a type of ravine wind, enhanced by a channeling effect while blowing down through the Moravia-Vardar gap, bringing cold conditions from the north to the Thessaloniki area of Greece. Most frequent during winter, it is blowing in the rear of a depression when atmospheric pressure over eastern Europe is higher than over the Aegean Sea.

Overall Review: So far they seem to be doing the job and they are doing the job well. Once again, the only inconvenience is that I can't plug them into my commander pro/ Plugging them directly into the mobo seems to work fine though. Overall, still a great product, would recommend for a custom water-cooling build.

Pros: - Good, quiet fan, even at high RPM...at least, for one of the two fans I've ordered. - Vibrant colors.

Cons: - One of the two fans produces a loud buzzing noise at high RPM. Noise might be from the fan blades hitting my radiator. There's white scratches on some parts of the radiator.

Overall Review: Going to try for a return or exchange of the faulty fan, but otherwise, the fans are good.

Pros: they are Bright Allso Quiet,(can not hear computer running) but can be heard when spun up fully..(rarely happens in my case)to be expected (Only time this comes on is running benchmarks OC 9900k ) lol Moves a lot of air through my radiator. (IT SHOULD be noted I do not use filters on my cases just clean/blow them out every 6 months

Cons: Dosent have rubber mounts on fan chassis..but hasn't been a problem wireing-all fans come with same length leads..which means ones to short and ones to long...which leaves wireing up and makeing it not look like a rats nest is just another issue to work on.(minor issue wich most fans have..but would like to see modular plug on fan chassis with choices of wire lengths (I have 2 360 rads so running wires cosmetically can add alot of effort to building a Rgb masterpiece)

Overall Review: these are a bit pricey but do what they advertise.. I would recomend them and have purchased extras (I have 6 in my case)

Overall Review: *Remember when installing the little arrow on the RGB header, make sure the arrow plugs into the 12V or else you wont get any lights! There are two cables, PWM (4 Pin) and RGB per fan.

Cons: The cable is only about 12" long which made it difficult to route around the case.

Overall Review: The fan comes with four screws for installation in a case.

Pros: -beautiful rgb. ek did it right with how the led's are setup. not to bright but offers excellent illumination. rgb is also connected via a standard rgb header on your motherboard. so you can easily configure it without any additional software nonsense. -double ball bearings. no more fluid stuff. long life especially in high heat situations like being slapped on a radiator. can also be used in ANY orientation. unlike sleeve. -quiet for double ball bearings. yes, double ball bearings do have a slight sound but, at least for me, I can only hear it if I shove my head up to the fan. -pwm works wonderfully.

Overall Review: I bought it to replace the stock fan that came with my cooler master ml120l AIO. quitter, more static pressure, and beautiful rgb. I have my ml120l in a push pull with this in push and a gentletyphoon pwm 2200 in pull.

Cons: - Bit of a hum on the filter but not loud or impeding on games

Overall Review: So far they have been great I plan to buy 6 more

Pros: The fans are quiet when not running at 100%. They keep things cool very efficiently.

Overall Review: I have not yet made the connections for rgb. They will probably look great once that's done.