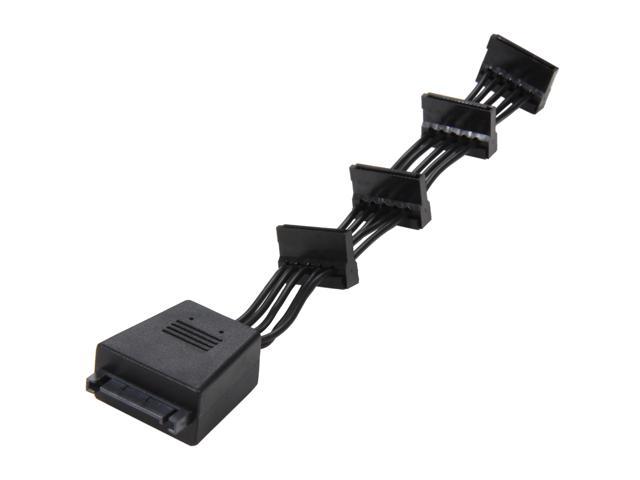 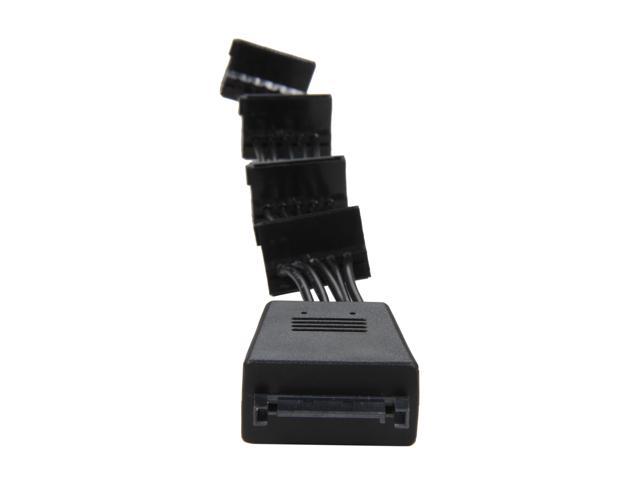 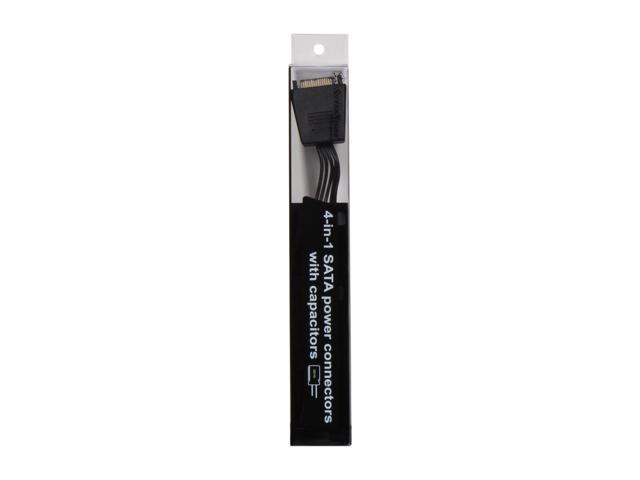 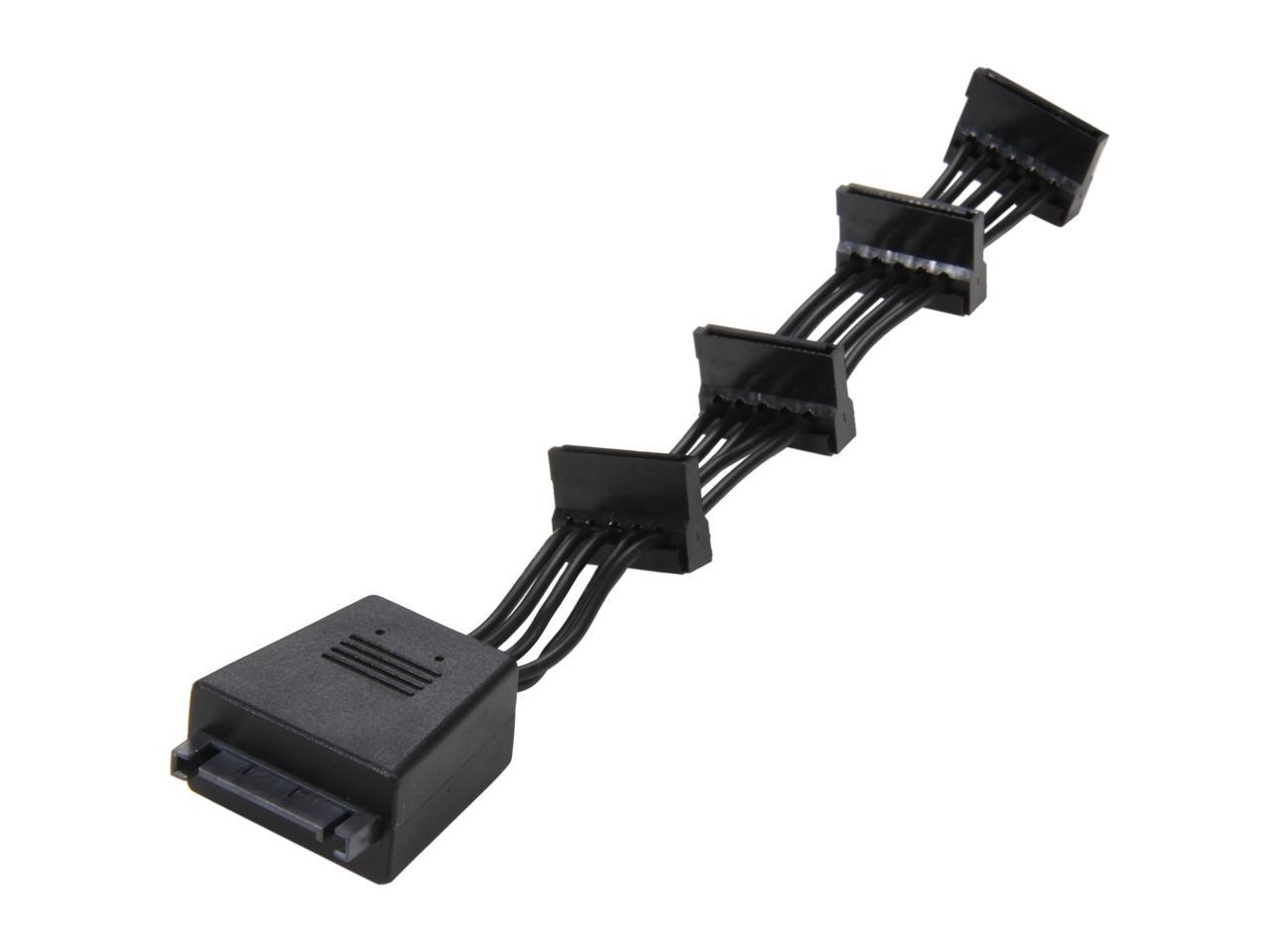 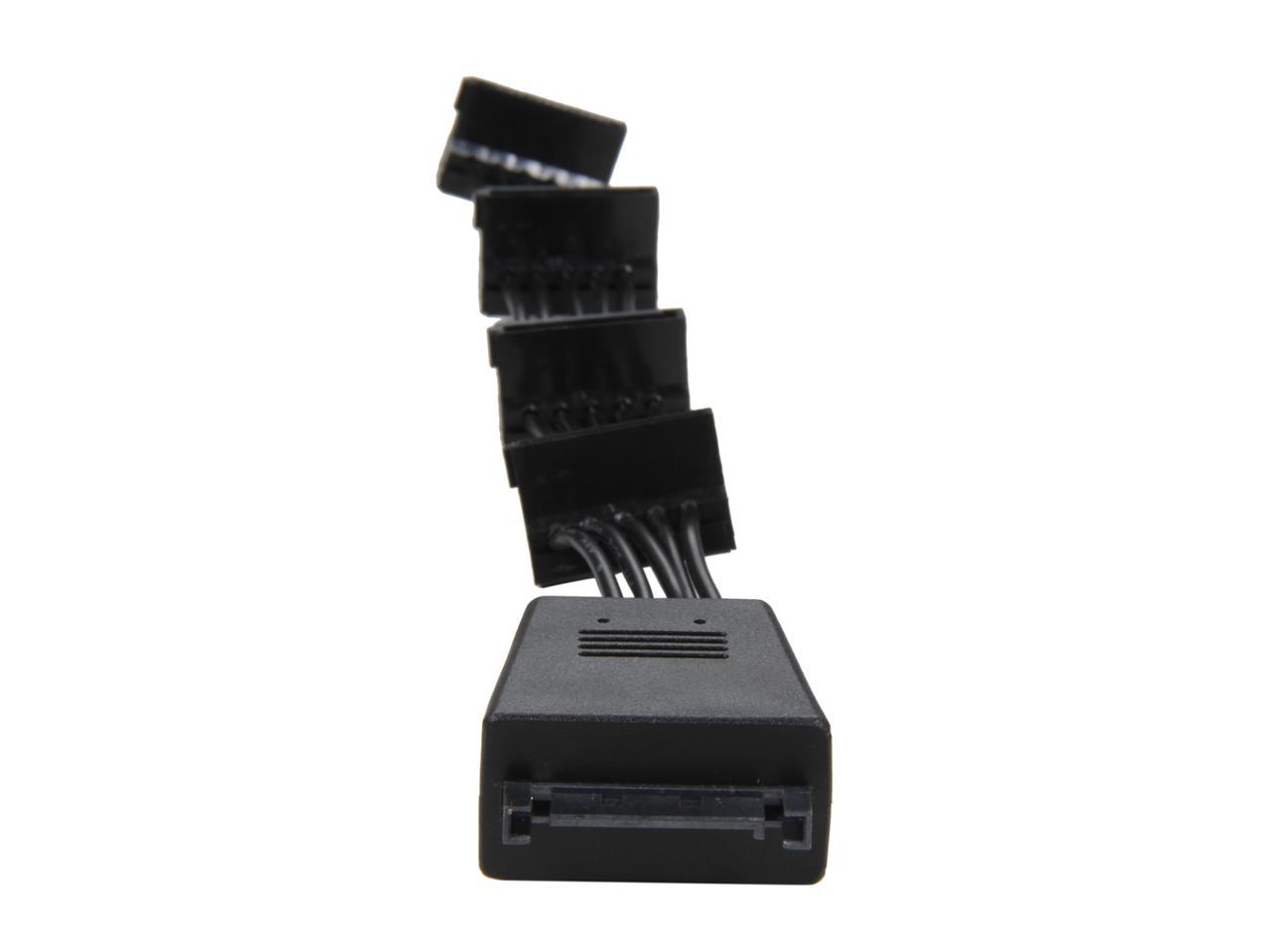 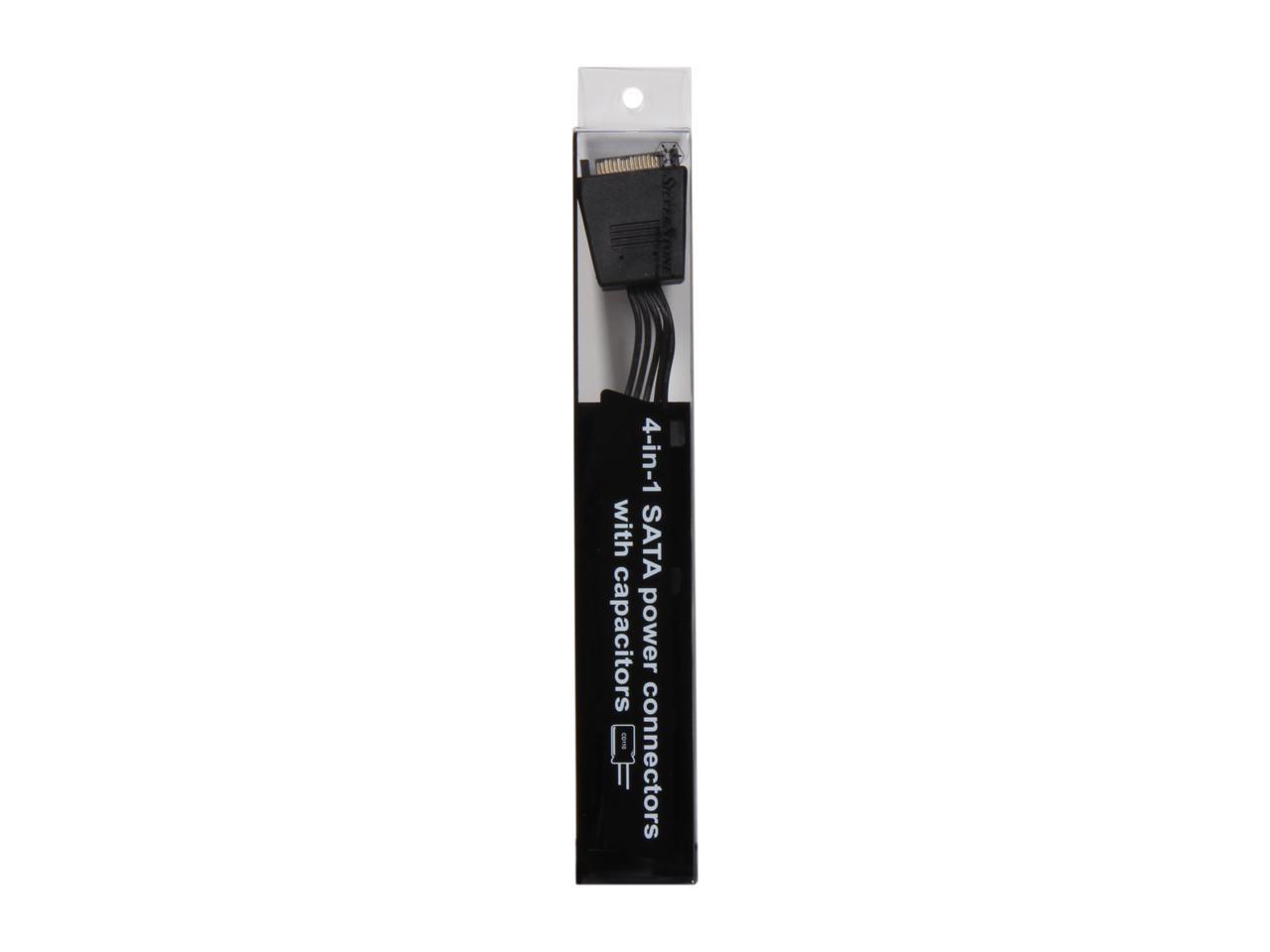 (24) Write a Review
OUT OF STOCK.
Overview
Specs
Reviews
Specifications

Learn more about the Silverstone CP06

Pros: I build a lot of computers, and the biggest pain with wire management is always the storage subsystem. All PSU's have an excessive amount of length between the actual connectors, which at best results in quite a mess and at worst can actually put an immense amount of stress on the drives' SATA power connectors. I make my own 100% custom, length to fit, individually sleeved (paracord or MDPC-X, heatshrink-less) cables for my personal builds, which allows me to simply use a punch down tool and place the connectors with the exact spacing so that there is zero slack but also zero pressure. However, most people don't want to spend the extra two to four hundred dollars to have me do a full custom sleeving job with custom cables; apart from my own systems, this is pretty much limited to the high end enthusiast oriented builds I do. I was always curious about this, not only due to the perfect spacing but also because of the use of in line capacitors. The thing with hard drives is that while they have meager power requirements during use, they can require up to 5-8x their "normal operating" voltage during spin up. In computers with one or two drives, this is not an issue at all. However, if you have 8 drives in your system, 6 of which are mechanical hard drives (ie my personal main gaming and work machine), those six drives can pull quite a lot of power through the cable during boot (I always set drives to never spin down while on, as it's a simple way to greatly reduce wear and tear). I know from my work with professional audio that power stability is not only the most crucial aspect of any electronic device, but also one of the most overlooked. I have addressed the power coming from the wall (between wall and computer) courtesy of the quite honestly perfect TrippLite ISOBar8Ultra (4x pairs of isolated banks, with EMI/RFI filtration beyond 100dB, and voltage regulation/power line conditioning) as well as a CyberPower 2200va (1650W) PFC-compatible Uninterruptable Power Supply. This reduced voltage fluctuations to less than 3mV, but it doesn't do anything to the power that has passed through the PSU heading to components, and computers are filled with interference. This cable, after testing out two in my main PC and another 8 in my main home server (28x HDDs in 3 arrays via SAS9261-28i), is now something that I keep around at all times, and use in every build whether it's a budget AMD rig, a fully water Cooled behemoth, or even a 4-Processor Home Server that doubles as a Folding rig carrying 96-192GB RAM and as many as 48 internal HDDs. I have now used 68 of these, with in-use times as long as 1.5yr 24/7, and have never had a single issue. They clean up your case, improve voltage stability even with 8 drives connected and all spinning up simultaneously (using SATA Y cables to see), and improve airflow through drive cages. Silverstone has continued their history of making massively over engineered, functional, and very affordab

Cons: Honestly, considering how much these do right, any "con" is going to be nitpicking... The capacitors do make the attachment point fairly bulky, but it's usually extremely easy to hide this. Doesn't perfectly line up with a mix of HDDs and SSDs in the same cage due to the very different form factors, but I have not seen it to really benefit SSDs anyway. Plus, I always run the SSDs off their own SATA power cable from the PSU, for both organizational reasons as well as to more evenly distribute the load over various wires. The black looks great, especially since all the wires are a very strong black (no rainbow wires!), but I would really like to see it available in grey and especially white. That's all I can think of.

Overall Review: My main rig has the following supported by this cable: - 2x WD10EZEX 1TB HDDs in RAID0 - 1x Seagate 7200.14 2TB - 1x WD RE 3TB - 1x HGST Ultrastar 2TB - 1x WD VelociRaptor 1TB In addition, I have a Samsung 830 256GB SSD for OS and boot, with a Plextor M5P-Xtreme 512GB as my game drive. This is in a system with a 3930K @ 4.94Ghz, Asus Rampage IV Extreme, 32GB DDR3-2296 9-10-10-27 1T G.Skill (Ripjaws Z) or 16GB DDR3-2598 9-12-11-31 1T (Trident X), 3x EVGA GTX670 FTW 2GB in SLI that I just replaced with 3x GTX780 3GB (1320core + 7260mem) due to wanting to run more than 8xAA at 2560x1440, LG Blu-Ray Burner, Aquacomputer Aquaero XT with 4x Power Station units, Lamptron FC-Touch 30W/ch fan controller, and it's all housed in a CaseLabs TH10 (120mm extended top, extended pedestal, 5x/ea Heavy Duty vertical/horizontal accessory bars and 2-5x/ea of every accessory plate they make, 4x Flex-Bay Drive Cages with fan mounts, heavy duty rad mounts) with an NZXT HALE90V2 1200W 80+Gold Full Modular PSU providing power (and with full custom cables). It's fully water Cooled, with a Swiftech Apogee HD in White for CPU, MIPS R4E Ni/POM Motherboard Block Set, 2x 4-DIMM EK RAM blocks with universal adapters, 3x Heatkiller Hole Edition GPU Full Coverage blocks and backplates, and the Aquacomputer blocks for the Aquaero PCBs. Single loop, 2x MCP35X2 pumps (2 dual-pumps for 4 total), 2 Bitspower 400mL Reservoirs, over 150 Bitspower White Rotary Angled Fittings/Adapters/Extensions/etc, and of course, 2x Alphacool NexXxoS Monsta 560 (4x 140mm length with 8x Bgears Blasters push-pull each), 2x Alphacool NexXxoS UT60 560 rads (8x Bgears Blasters push-pull each), Watercool HTF4 Copper-Finned Ultra Premium 3x140 Rad (6x San Ace 140x38mm push-pull fans), and 2x Aquacomputer HTF4 Copper-Finned 1x140mm rads with P-P San Ace 140x38mm fans... Point being, I have put a ton of time and hard earned money into my build, and I fully trust the Silverstone HDD cable. I have done a bunch of testing with my quartet of Fluke Digital Multimeters to see the difference in voltage before and after the capacitors, including testing fluctuations during spin up, as well as testing everything else. Even sticking 4 Patriot Supersonic Boost XT 128GB USB3.0 flash drives in to work alongside the two SSD (one per HDD, to rule out outstanding IO variables), and transferring a total of 103GB from each NAND drive to each hard drive simultaneously (files range from over 50,000 4-24KB to as large as a single 33.8GB file, to force the drives to work hard), I never saw any voltages outside the margin of error. I already know that my PSU has less than 13mV ripple, so I tested on a PC w a not so good PSU (ie 98-418mV ripple), but after adding one of these, the ripple going to the drives was reduced to around 25-38mV!!

Pros: It provides power to the devices plugged into it.

Cons: The wires are too stiff. I was concerned about stress on the connectors of a stack of drives because the wires weren't bending enough. SATA power connectors are keyed in an 'L' shape. The small arm of the male 'L' connector broke off after a single test connection.

Overall Review: With a stack of drives, the male connector plugs into a power supply connector at the top of the stack, and the connectors go down the stack. My P/S is mounted at the bottom of the case, so this product is sub-optimal for my application, but that's my fault for not researching better.

Pros: Power 4 drives from one P/S connection, right-angle plugs are perfect for cross-mounted drives, tremendous improvement in cable management and apprearance (see below).

Cons: Absolutely none. The only improvements I could even think of would be different models with more/less connectors, or possibly a modular version (although the latter would negatively impact the appearance).

Overall Review: The problem with cross-mounted HDD's is cable management behind them. I know, nobody can see them, but in my case, I really had to stuff the cables down to get the side panel on, which is not good for the connectors on the cables or the drives. I wish I could post a picture of what an amazing difference this product made in both appearance and case clearance, and the reduced stress on the connectors even revived a drive I thought was dead. Plus, I got to remove one of the SATA power lines from my modular P/S and a splitter/adapter from one of the standard 4-pin molex lines (I have five internal drives), which DID clean up the appearance on the visible side.

Pros: It helps keep your computer clean by powering multiple devices with only one power connection.

Cons: Non, it does what it says great.

Pros: Made cable management so much easier in my case. No problems after a year.

Pros: Very good concept, execution is not great. Once installed, does wonders to clean up what would otherwise be a mess of cables.

Cons: The wires between the connectors are so rigid that connecting them to a stack of drives causes the ports on the drives to bend and flex as the cables want to stay straight. I almost gave up installing it for this reason. It was especially bad for me because I'm using a PERC6i controller with the 4-port breakout cable for SATA/single port SAS drives, which is basically a single connector that spans the power and data ports on the drive, has a single SATA data cable that goes back to the controller, and the power cable piggy backs onto the connector. This basically extends the connection to the drive another 1/4 or 1/3 of an inch, giving these rigid cables more leverage to bend and flex the connector on the drive.

Overall Review: I have a feeling these cables are solid core - maybe switching to a stranded core would make it more flexible without sacrificing the electrical capacity of the cable. Only experienced builders should use these - it would be very easy for a novice to break the connectors off their drives trying to install these.

Cons: Non what so ever. works as advertised and reduces cable clutter and makes the inside of my case look super frantastic

Overall Review: i would like to see these cables have two options an the way you could hook them up. the piece were you plug in the sata power is at the top of the chain. so it puts alot of weight on the last hard drive you hook up. this part should be @ the bottom so it dosent fold over.other then that i love these cables

Cons: None. Shouls have been reommended to go with the server case

Overall Review: I had a cable mess in my 12 hard drive case. This cleaned up the cables nicely