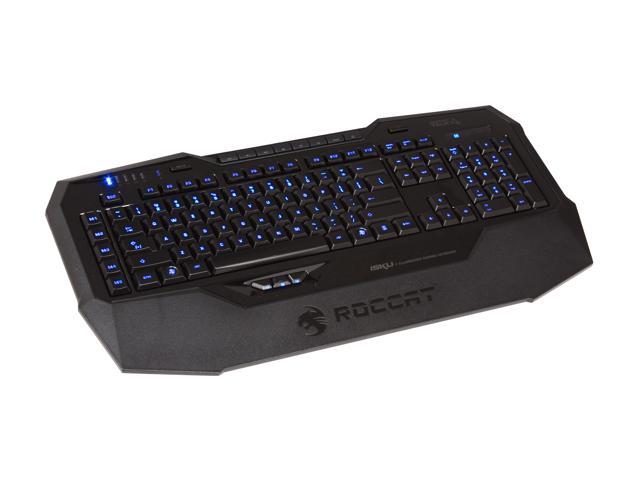 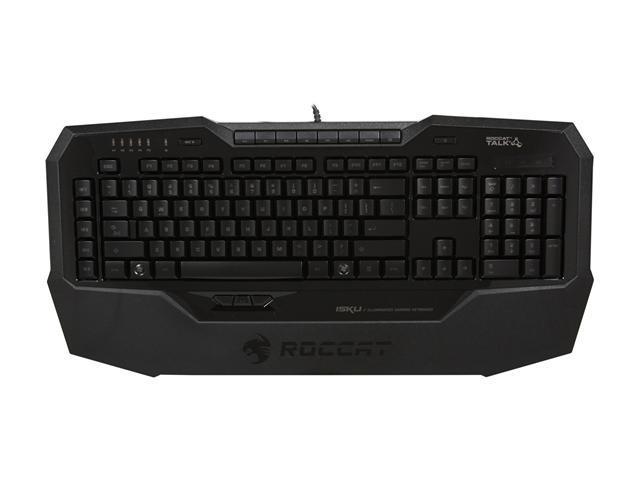 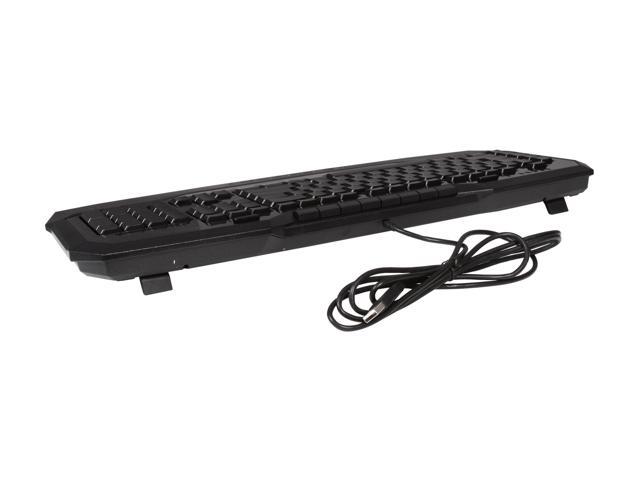 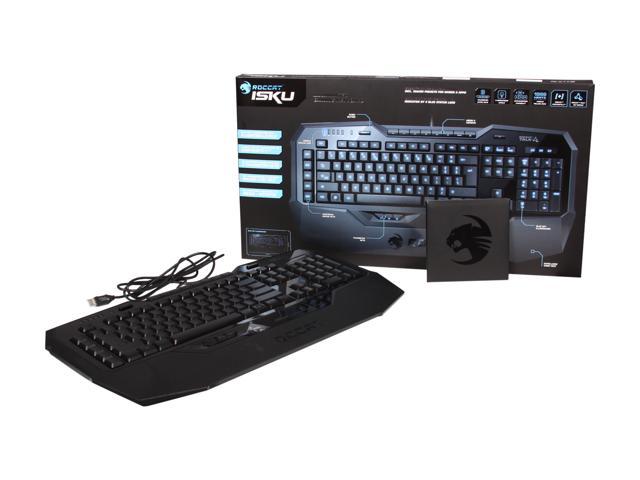 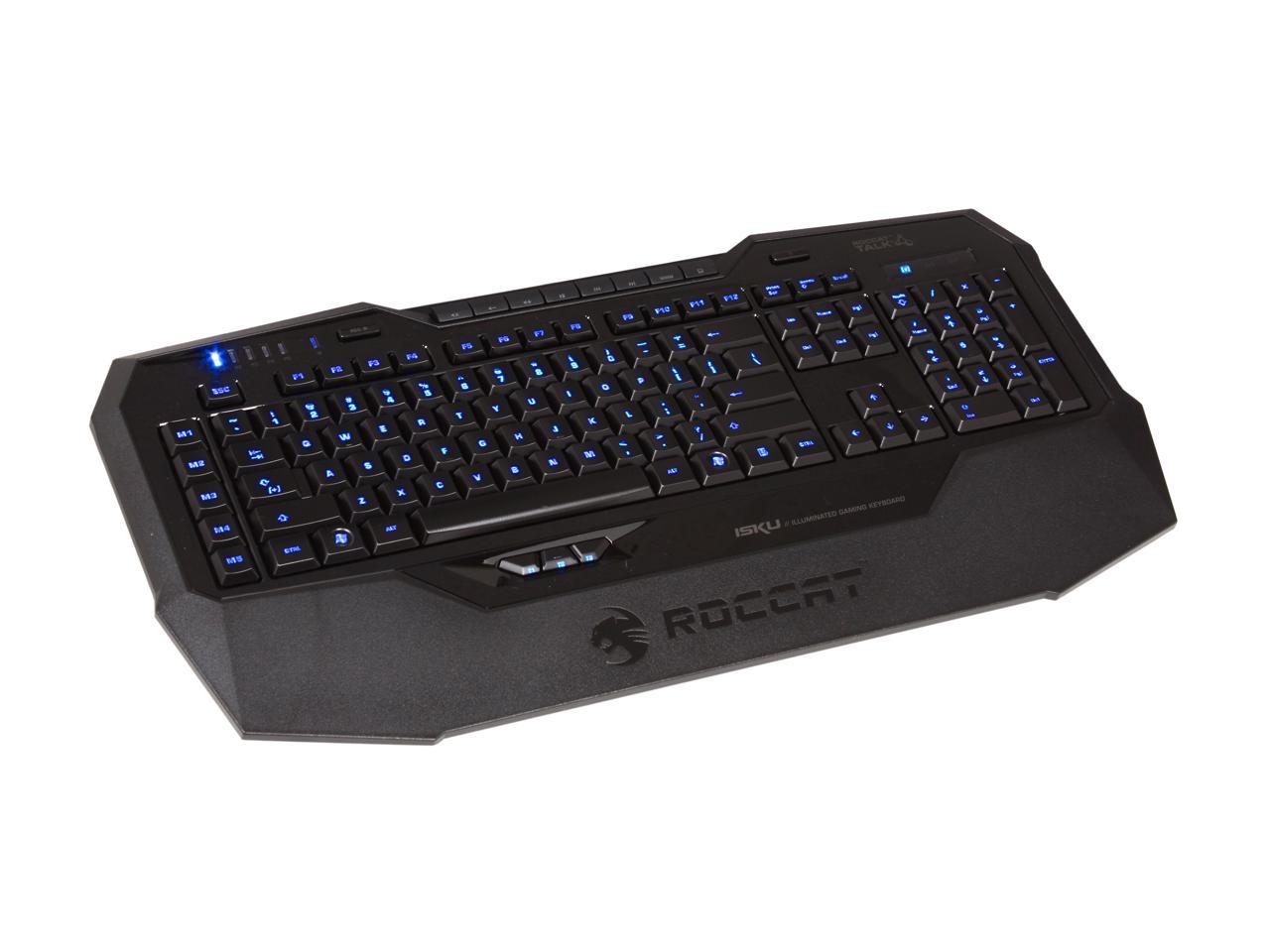 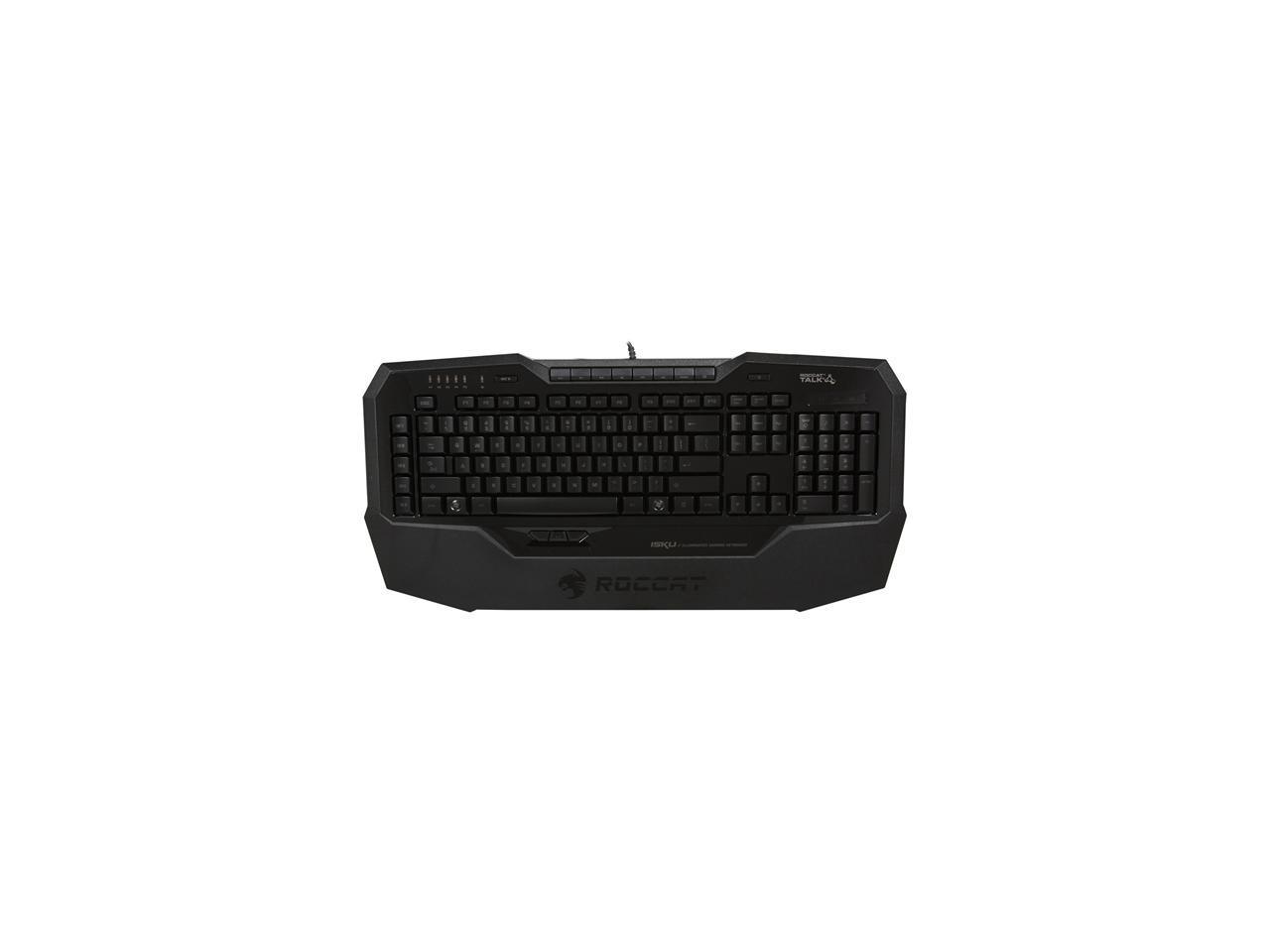 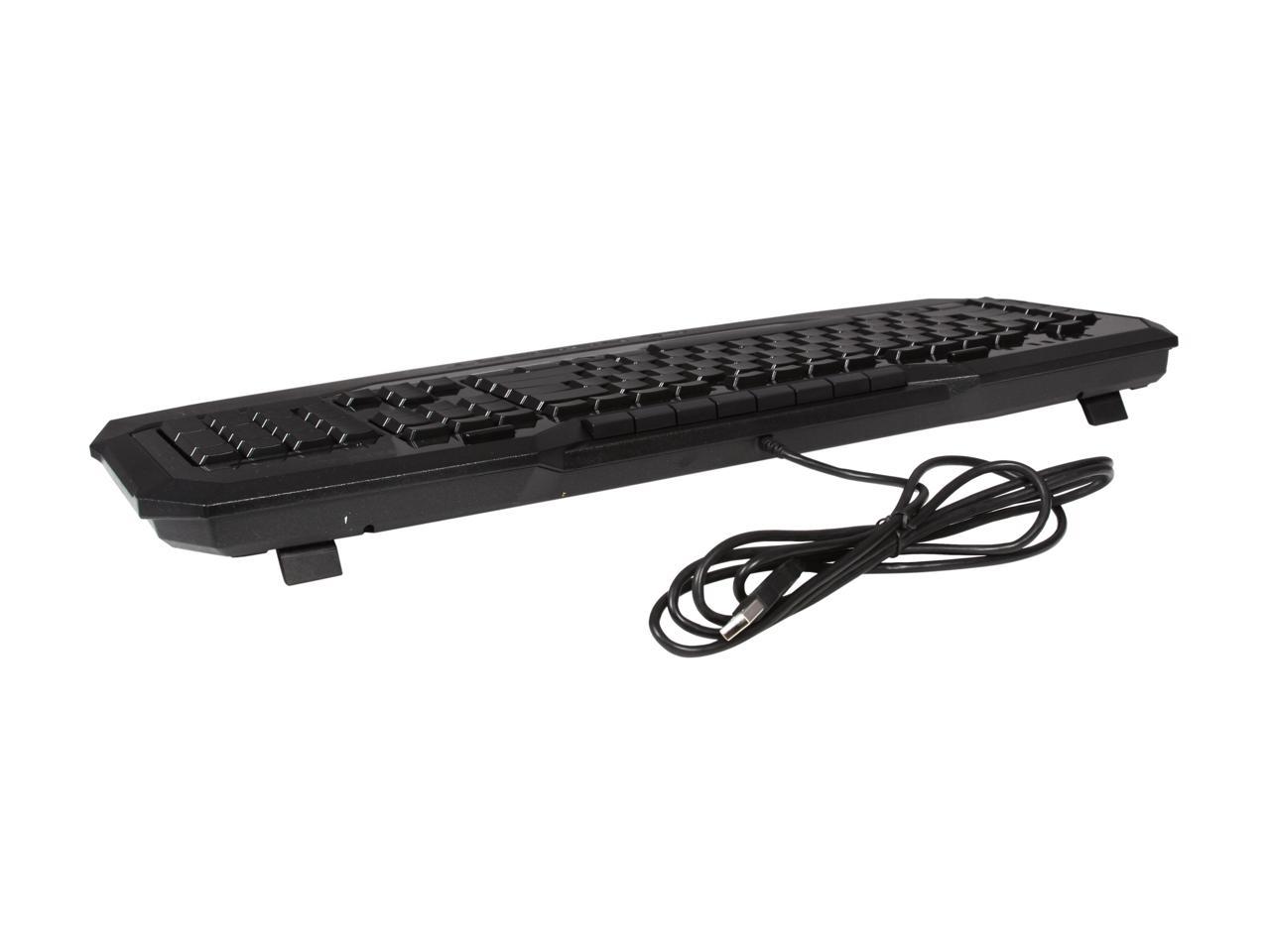 
Total gaming domination. It’s easy with the right tools. Combining the world’s smartest gaming engineering with jaw-dropping design, the ROCCAT Isku Illuminated Gaming Keyboard hands you the power to own any game the easy way -- and be legend.

For the first time in gaming history your keyboard and mouse can team up to become an unstoppable fighting force – giving you the revolutionary power to command faster, easier and more effectively than ever before. That’s because ROCCAT’s exclusive ROCCAT Talk protocol allows the Isku Illuminated Gaming Keyboard and the ROCCAT Kone[+] high-performance gaming mouse to talk to each other – giving you a powerful set bonus that lets you execute mouse macros quickly and easily right from your keyboard. This groundbreaking technology works like a dream together with the exclusive Easy-Shift[+] technology. Simply use the Easy-Shift[+] key on your Isku to activate macros for both your keyboard and mouse -- an ingenious short-cut that lets you concentrate more on your game and less on controls. Your Kone[+] will even signal you with a light flash every time it’s chatting with the Isku – so you’ll know when the two are working together.

ROCCAT Talk also lets you take advantage of the exclusive Easy-Aim technology like never before. When your game demands precise marksmanship in sniper mode, simply press and hold a single keyboard key and Easy-Aim will instantly optimize the DPI setting on your Kone[+]. This two-handed custom marksmanship is the simplest and most convenient way ever to achieve pinpoint sniping accuracy. And it also frees up a Kone[+] button for another macro of your choice. Imagine the world’s best gaming mouse and the new king of gaming keyboards operating in perfect harmony – and doing your bidding on the battlefield. That’s what we call legendary gaming.

Learn more about the ISKU

Pros: It has a great feeling on the wrist and and pushing down on the keys also feels great :D

Cons: Will stop working once you spill hot chocolate on it :/

Cons: Glossy finish around keys may attract fingerprints, but most of keyboard is matte plastic so I dont find myself cleaning it all to often.

Overall Review: Overall excellent keyboard, i went with the isku because it was one of the only good-looking, backlit, gaming keyboards I could find for under 85$. I noticed they just discontinued this keyboard and released the Roccat isku FX version which for 25$ more, it only provides a timer and color-changing backlight.

Cons: Back lighting could have been better at angles the light is very dim or doesn't light the entire key. $80 can be a little steep for keyboard.

Overall Review: Best non mechanical keyboard I have ever used.

Pros: - Nice blue backlight (but see cons!) - Medium height keys like the Sidewinder x4 - Many profiles for macros - Wrist-wrest is very nice - Keys are quieter than the x4

Cons: - The blue LEDs composing the backlight are poorly placed. If you are hovering over the keyboard from above, it looks excellent. However, once the keyboard is set up in front of you and you are looking down at it at an angle, a lot of the keys appear to only be half-illuminated due to the design of how the LEDs diffuse their light - If the backlight is off, it is extremely hard to see the letters on the keyboard (not important for me, but a heads up to those who aren't touch-typists and have to see the keyboard) - Multimedia buttons don't have a backlight! Using them in the dark is impossible, you will have to turn on a nearby light or memorize the order of the buttons - Build quality could be better.. it feels cheaper and lighter than a Sidewinder x4, which shouldn't be the case given the premium price of this keyboard - The T1 T2 and T3 thumb buttons have different clicking sounds (T1 is louder than T2, which is louder than T3), though this is getting really nitpicky.

Overall Review: Roccat ought to tell its engineers to go back to the drawing board on this one, and take a note from Microsoft on LED placement and backlit media buttons. For the price premium of this keyboard, some of these flaws should not exist! I wouldn't recommend this keyboard unless the pros I've listed outweigh any potential cons you may have. This review is my initial impression of the keyboard, I'll definitely revise in the future as warranted. I'll be using this keyboard in FPS games like BF3 and Tribes: Ascend, and RPGs like Diablo 3, and I'll report back on how good the key rollover is compared to the x4. So far this impulse buy was a bad buy, and I'm beginning to have second thoughts. No promo shirt can fix this!

Pros: 2nd best looking keyboard out there IMO. Only thing better looking is Lycosa which isn't worth the trouble given the problems people have with it. This board looks great, the lighting looks great. They keys have a nice sound and travel.

Cons: The lighting. Even though there are 5 lighting levels it only looks good on level 5 and it could still be a little brighter. I realize now that I am not fond of macro keys on the left side at all. I constantly accidentally hit them instead of control or tilde or escape. Also the lighting can be spotty. If you're looking down on it from directly overhead it's great but if you look at it from a normal angle while on the computer it looks like the top half of each keys lighting is cut off. The software is meh. It prevented me from using caps lock so I had to load it up and tell it to make caps lock do caps lock which was kind of lame.

Overall Review: Roccat > Razer. I bought my first Roccat product (this) and my first Razer product (Mamba) and the Razer product was an absolute let down and doesn't even work properly. This keyboard is a gem. German engineering for the win. Just because you know how to put a computer together all by yourself doesn't mean your tech level is or should be a 5. Learn how to spell and learn proper english and then maybe people would believe that you know what you're talking about.

Pros: The box this keyboard comes in is a work of art, its glossy beautiful and eye catching. It was packaged well, the keyboard itself is matte black with certain parts glossy black. The blue LED lights are plenty bright, their is 5 different levels of brightness including off. The keys are fluid and quiet. Like many have said the LED needs to be viewed a certain way to fill in the whole character but its really not bothersome, especially if you know where the characters are. I almost didn't buy this because people were not satisfied with it on here and then I realized people on here are way to hyper critical. Its a keyboard it lights up its clean and functional but it and then get on with your lives.

Pros: Going to compare to the RAZER ANANSI, since it's the only other keyboard I know of with thumb keys. -THUMB KEYS. Main selling point, IMO. 3 vs 7 keys - easier to learn - and they are backlit (the Anansi's are not. Seriously, not backlighting keys the only keys are almost definitely new to you? Not cool). -EASYSHIFT+. Now you have four modifier keys, not three! -Blue light is a nice, dark shade. Anansi has only light blue (ew), but has other color choices, even color cycling. -Keys feel wonderful. Not mechanical, but very quiet. Wife approved! IMO, smoother than the Anansi's, which are okay, but feel relatively mushy. Keep in mind mechanical is not "better," it's just different. That said, mechanical is nice. With THAT said, there is no mechanical keyboard I know of with thumb keys. -Only uses one USB port, vs two. -Both have on-the-fly macro recording. -Comfy wrist rest. -The thumb keys!! Seriously! Use all five fingers, not just four one dedicated to jumping!!

Cons: -May have 5 profiles. Anansi allows 10. -May not customize every key - only the function keys, the media keys, the M1-5 keys on the left side, the T1-3 keys (thumb), and the first five keys going from left to right on the main portion of the keyboard (ie 1-5, Q-T, A-G, Z-V). With the Anansi, you may fully customize every single key to do anything. Probably doesn't matter to the extremely vast majority of customers. -Overall, I found the Anansi's software more intuitive and simple to use than the Isku's. Took about 5 minutes to fully figure our The Anansi's, versus 30 minutes to feel comfortable with the Isku's software. -Backlighting has the key-half-lit issue others talk about when viewed at an angle, but it's not severe. Still a nice, dark shade of blue. I don't mind it at all. I'm somewhat picky. -Media keys not backlit.. but the thumb keys are! -No onboard USB port, audio or mic jacks. -BIG!

Overall Review: Let me start by saying that the biggest features you should be looking at are the THUMB KEYS and the EASYSHIFT+, unique to the ROCCAT ISKU. The other reviews go over the other things quite well, so I'm going to elaborate on these two features. The thumb keys are not just a gimmick - I honestly would not imagine playing without them on purpose ever again. I like using the middle thumb key to activate SLOMO in the FPS series FEAR, for example. The EASYSHIFT+ is, essentially, an additional modifier button, such as CTRL, ALT, or SHIFT. Would be extremely useful in MMOs. By default it is on the CAPS LOCK key for easy access - and by default, you would turn caps lock on by holding your EASYSHIFT+ button, then pressing T1, for example. You may place the EASYSHIFT+ button anywhere you may customize a key except the function and media key sets. I love this keyboard - thumb keys really are the way. It's truly not just a gimmick. I wholeheartedly feel I got my 85 dollars' worth. Recommended

Cons: The space bar got a little wonky a few years in, other than that the escape key died after having it for so long.

Overall Review: ROCCAT, please don't ever stop making great products. You guys are the first I go to now when it comes to peripherals.