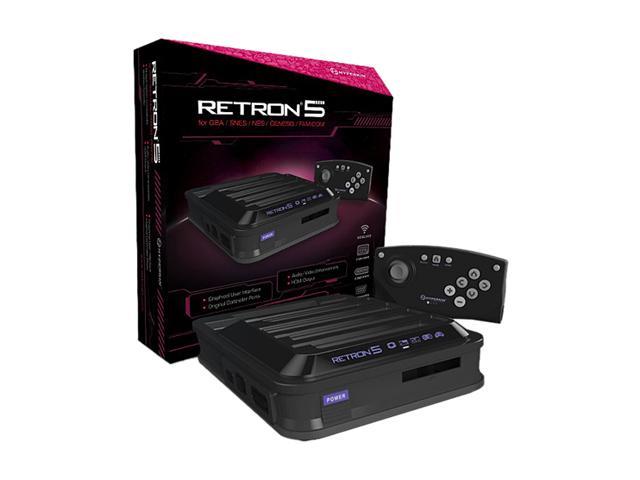 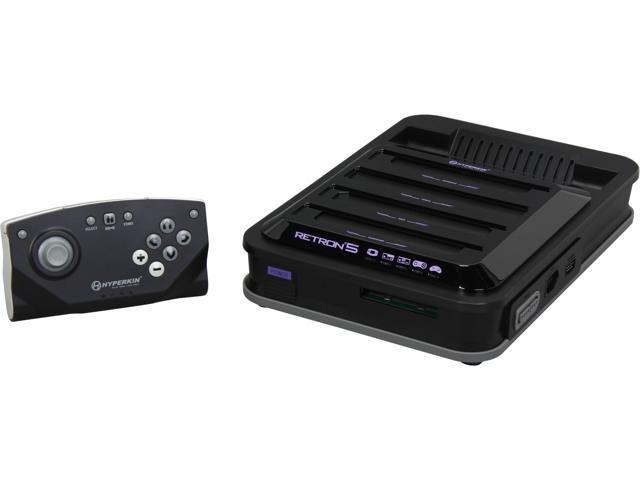 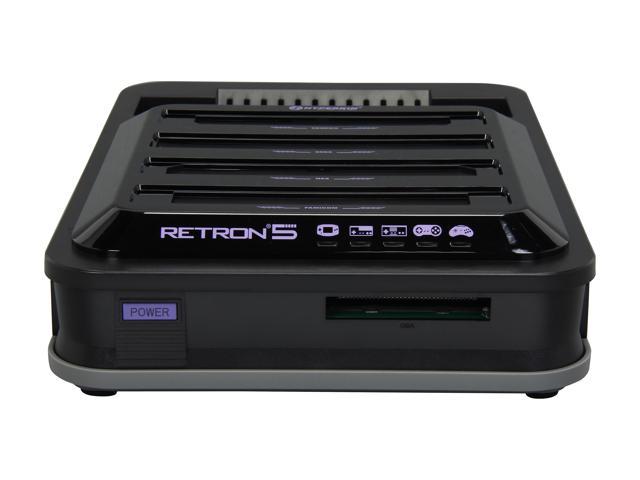 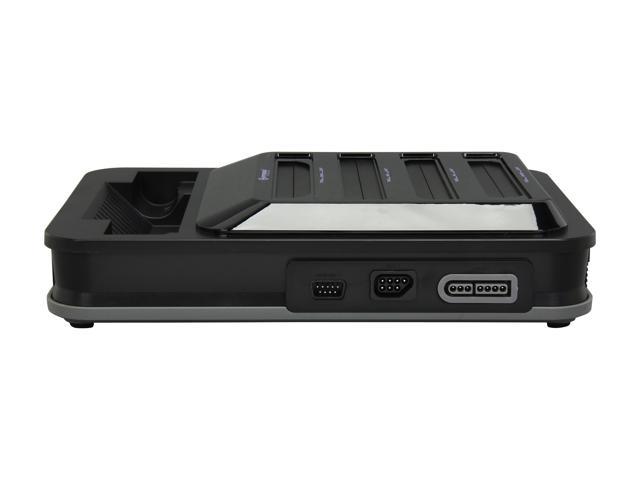 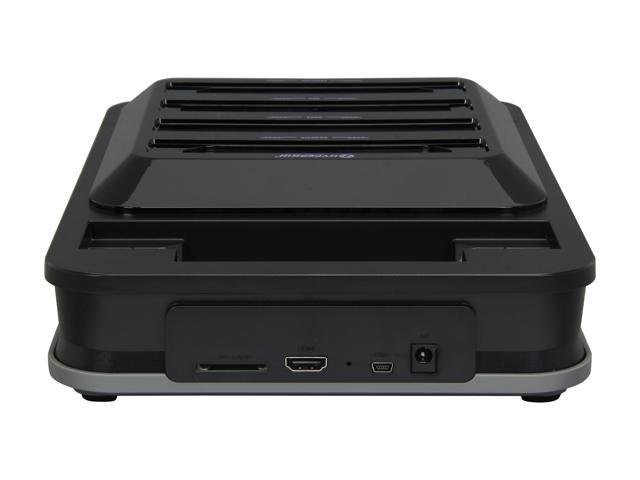 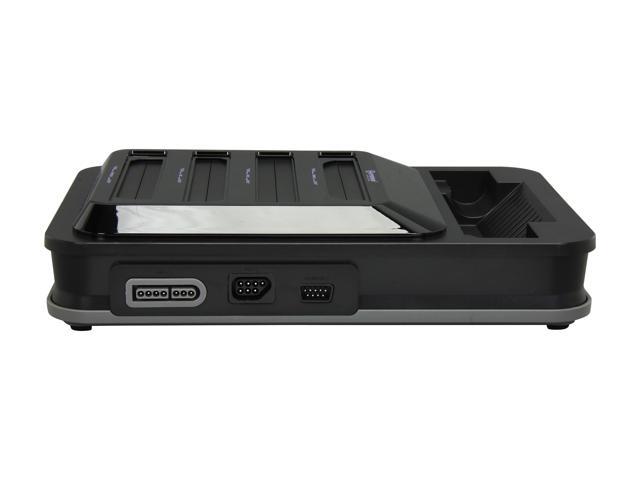 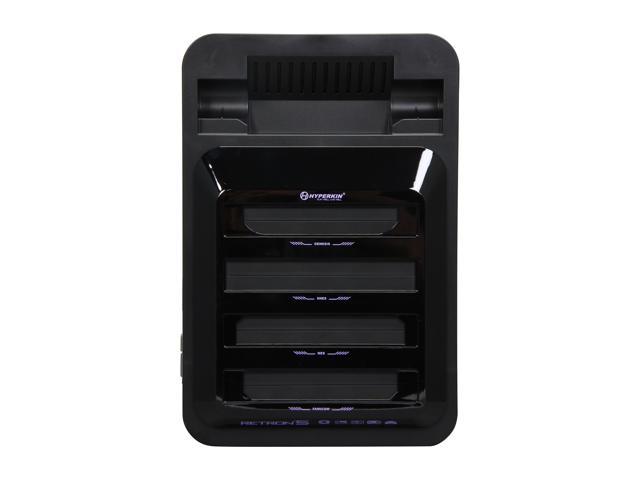 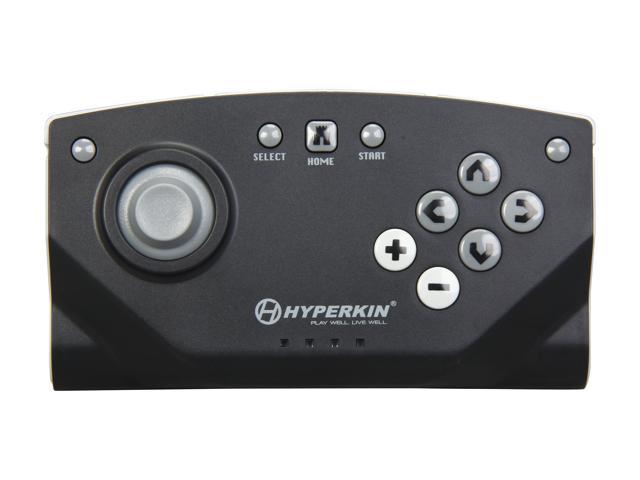 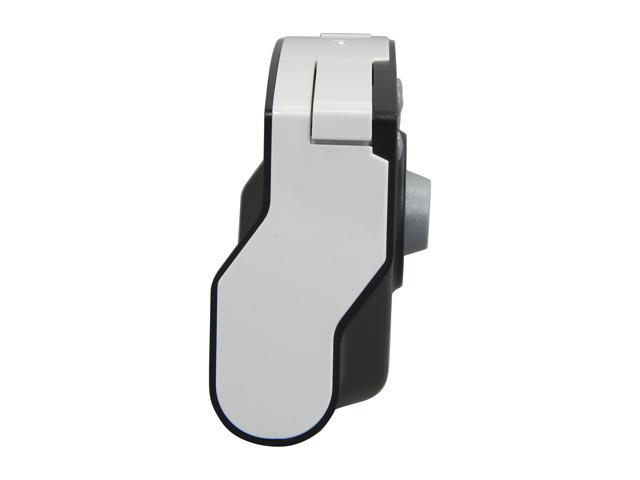 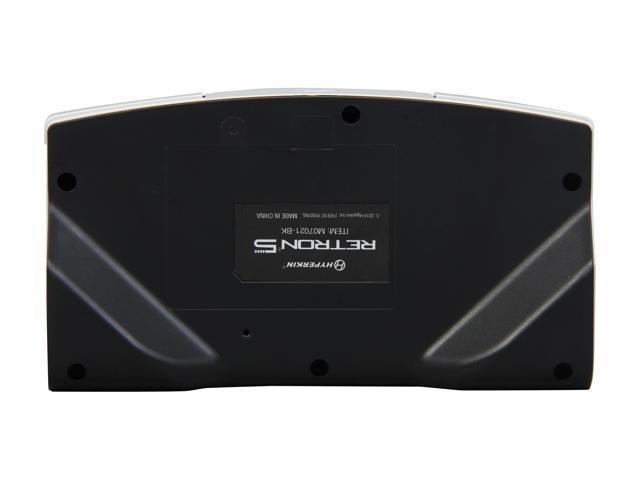 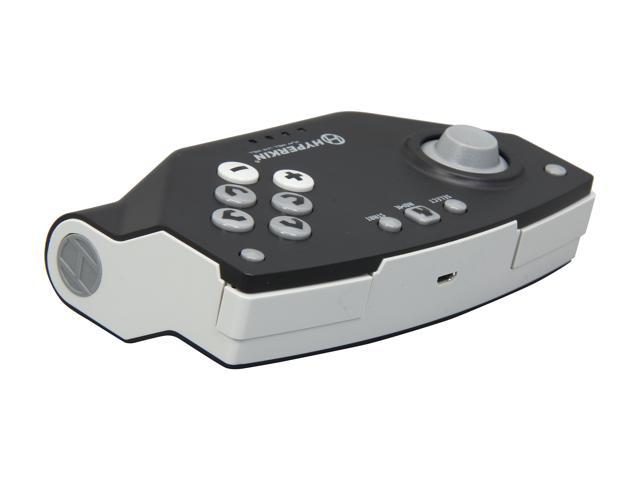 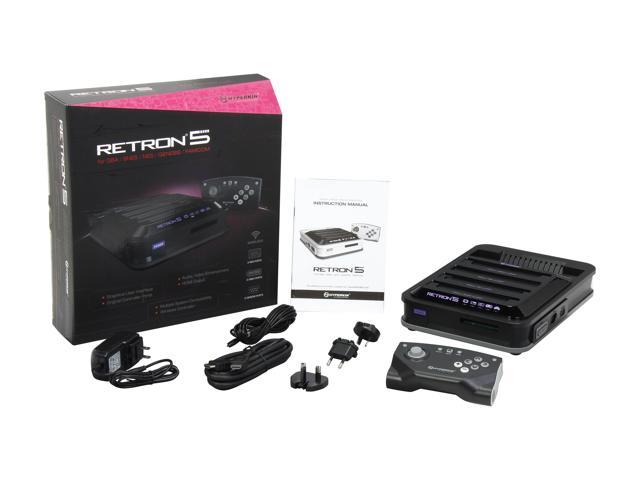 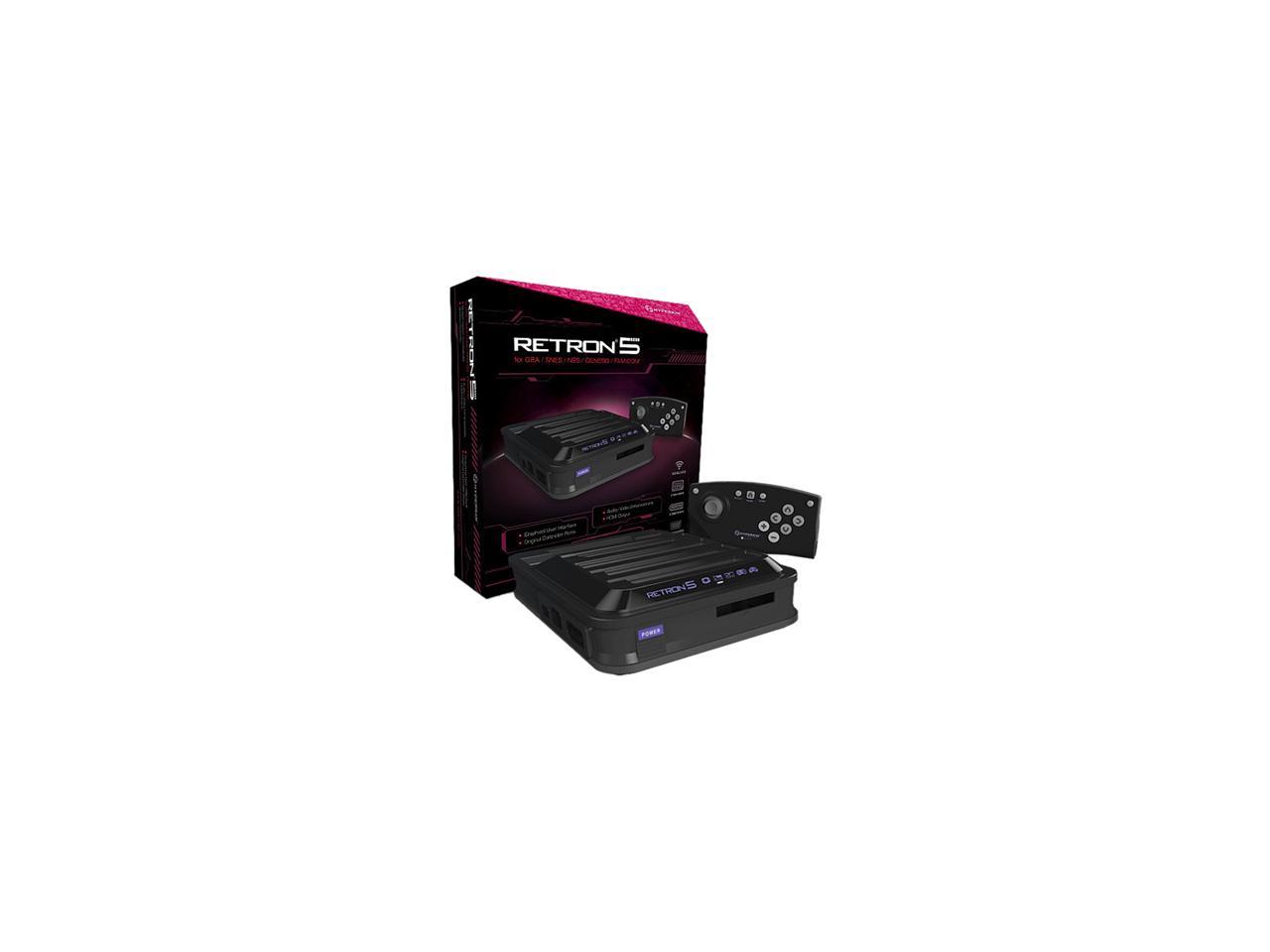 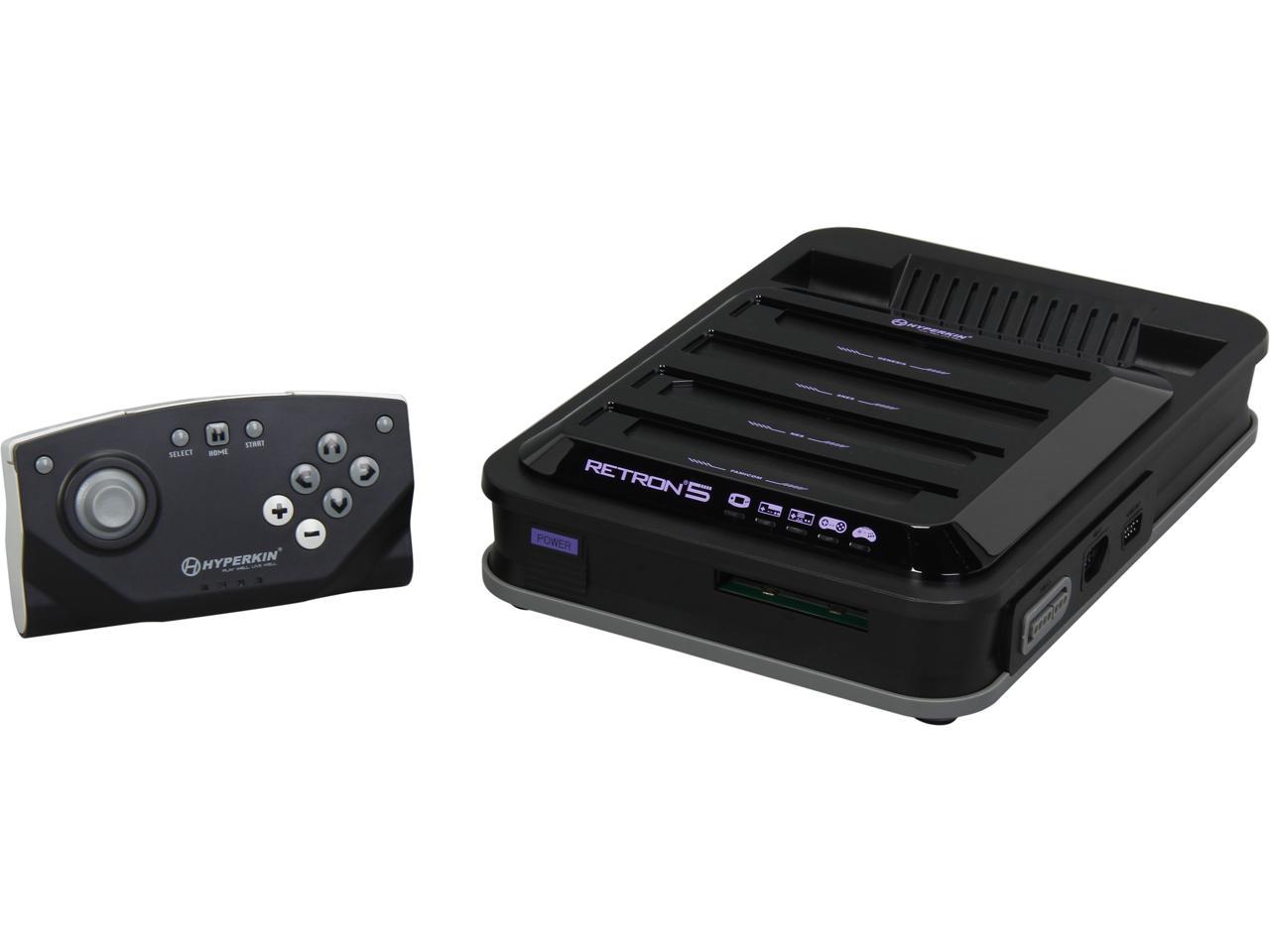 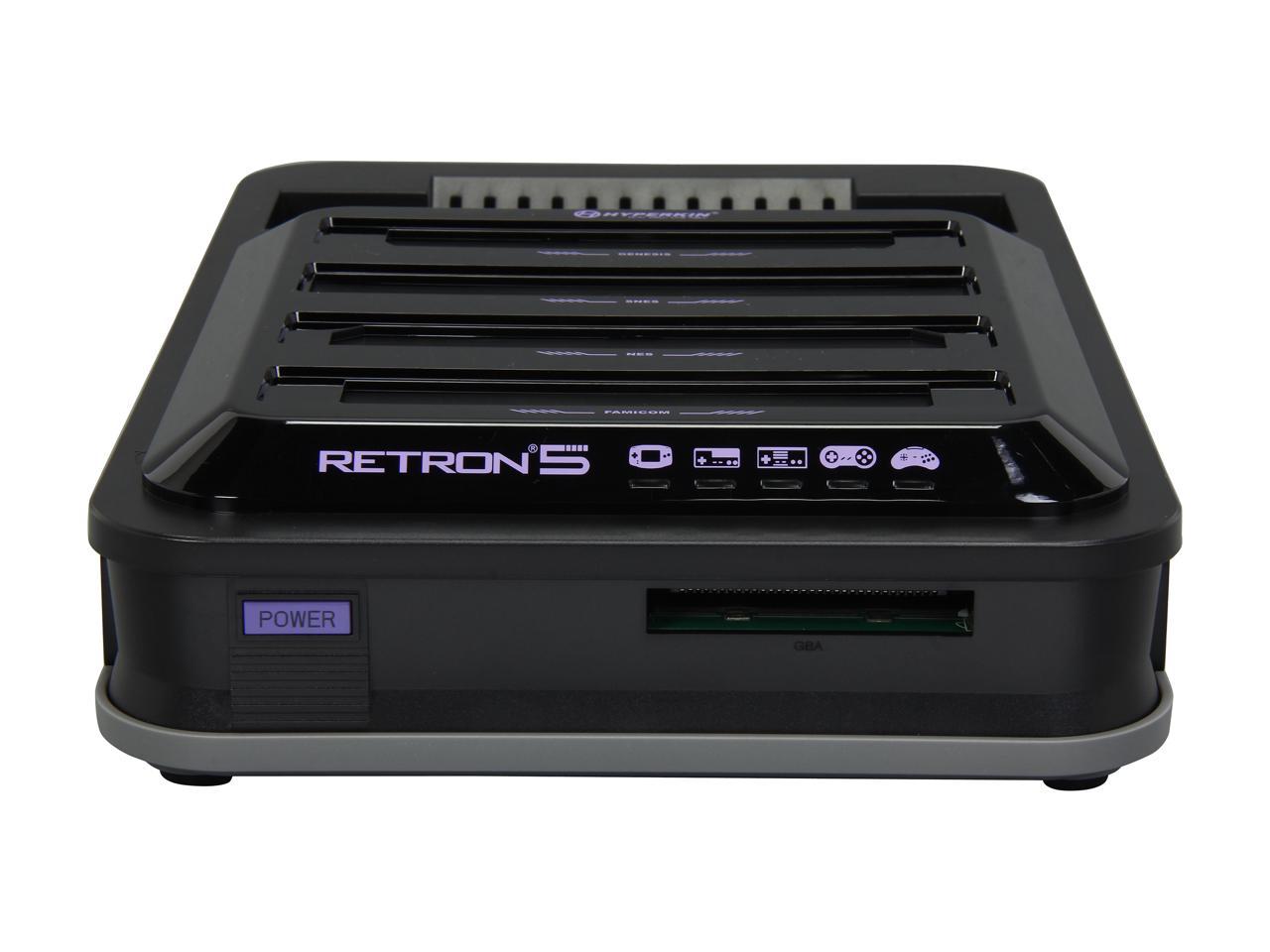 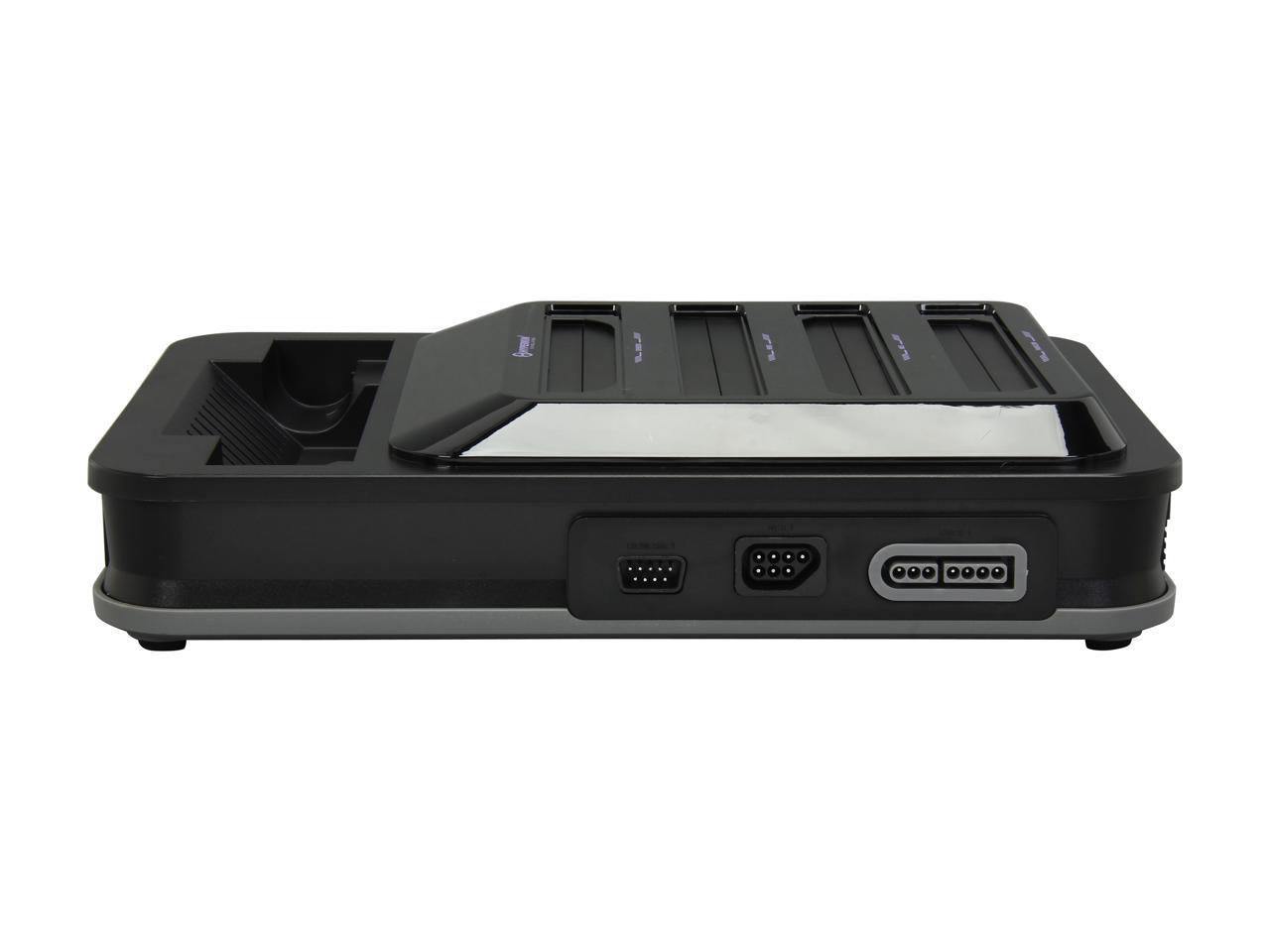 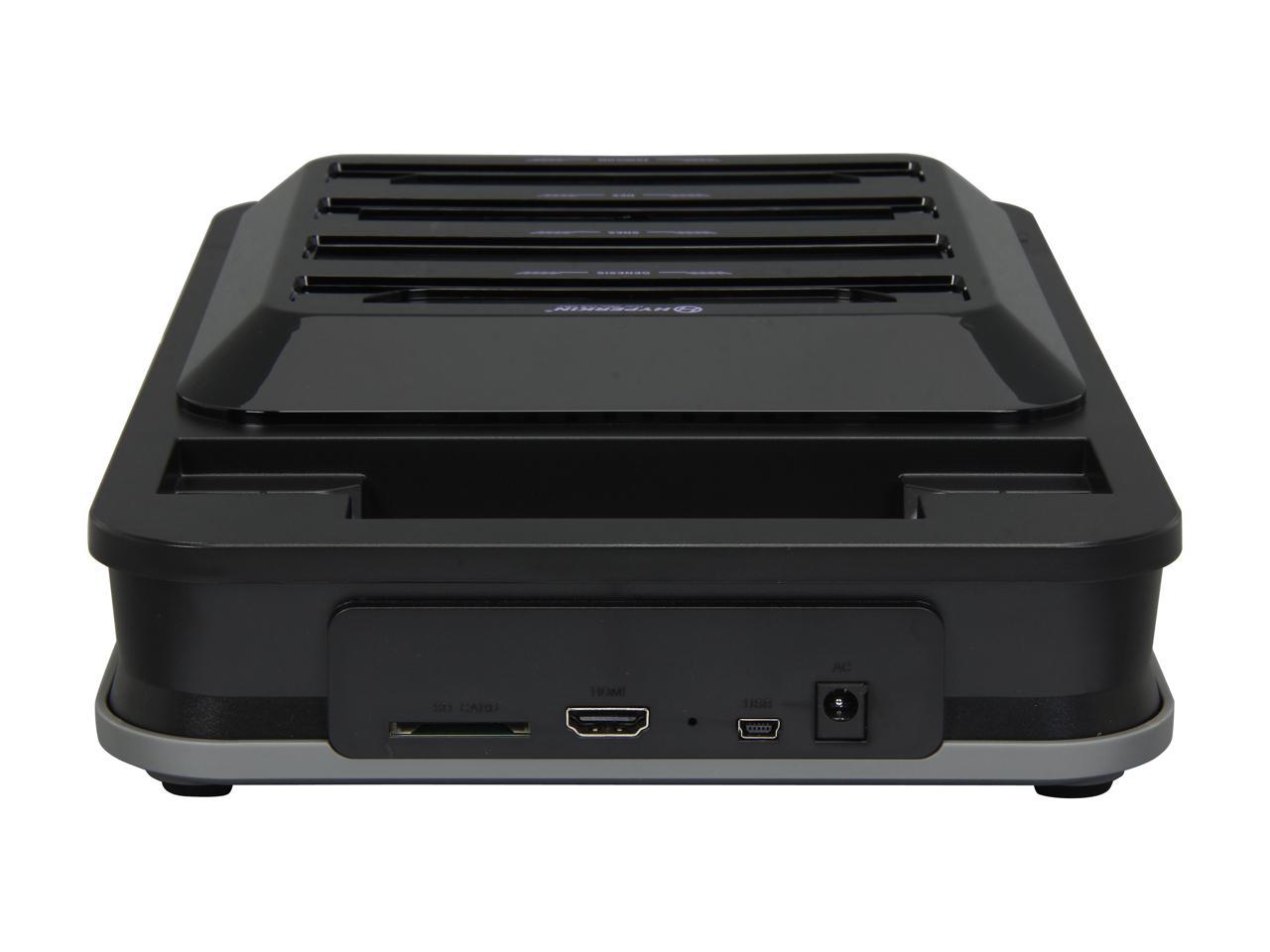 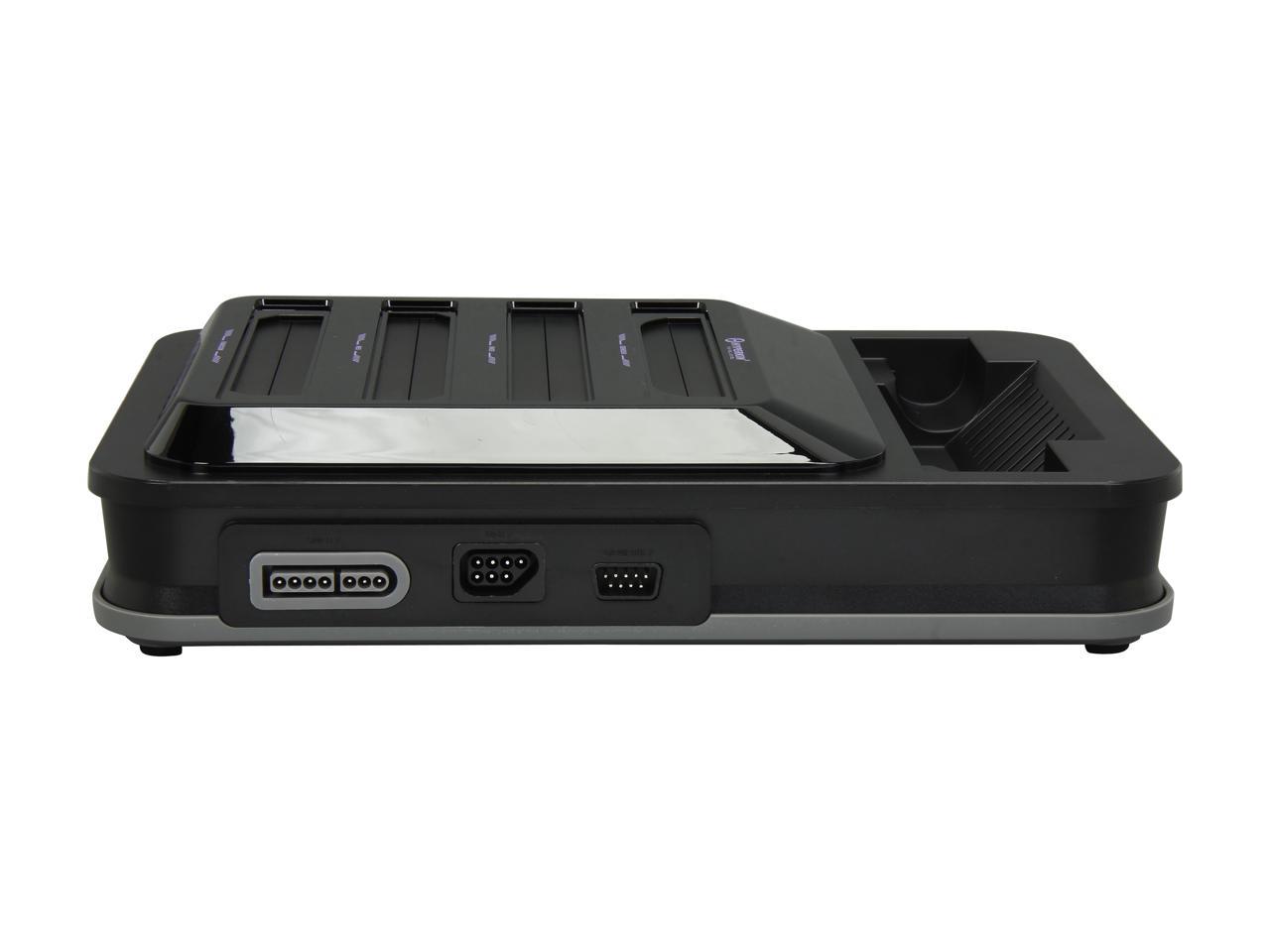 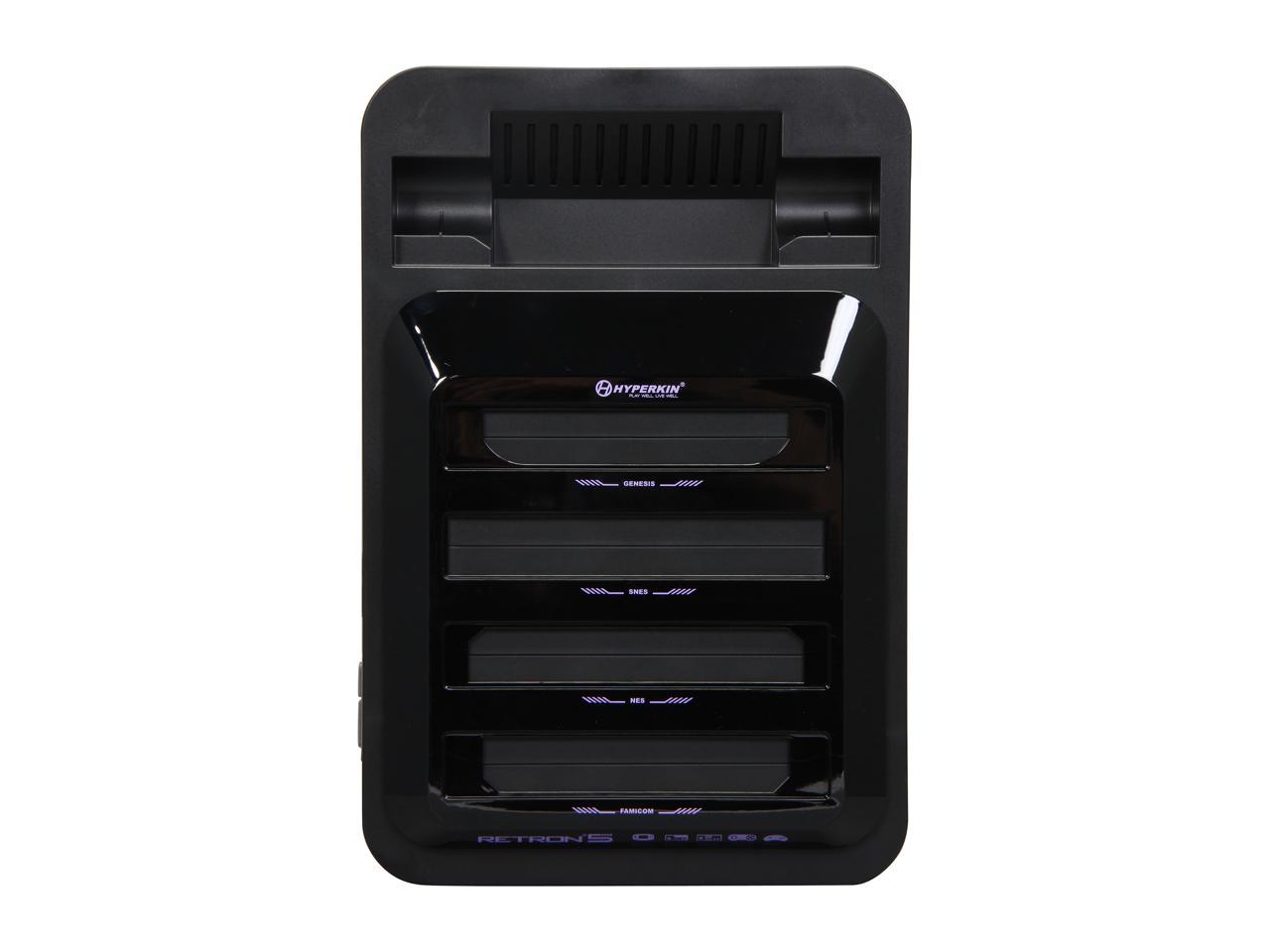 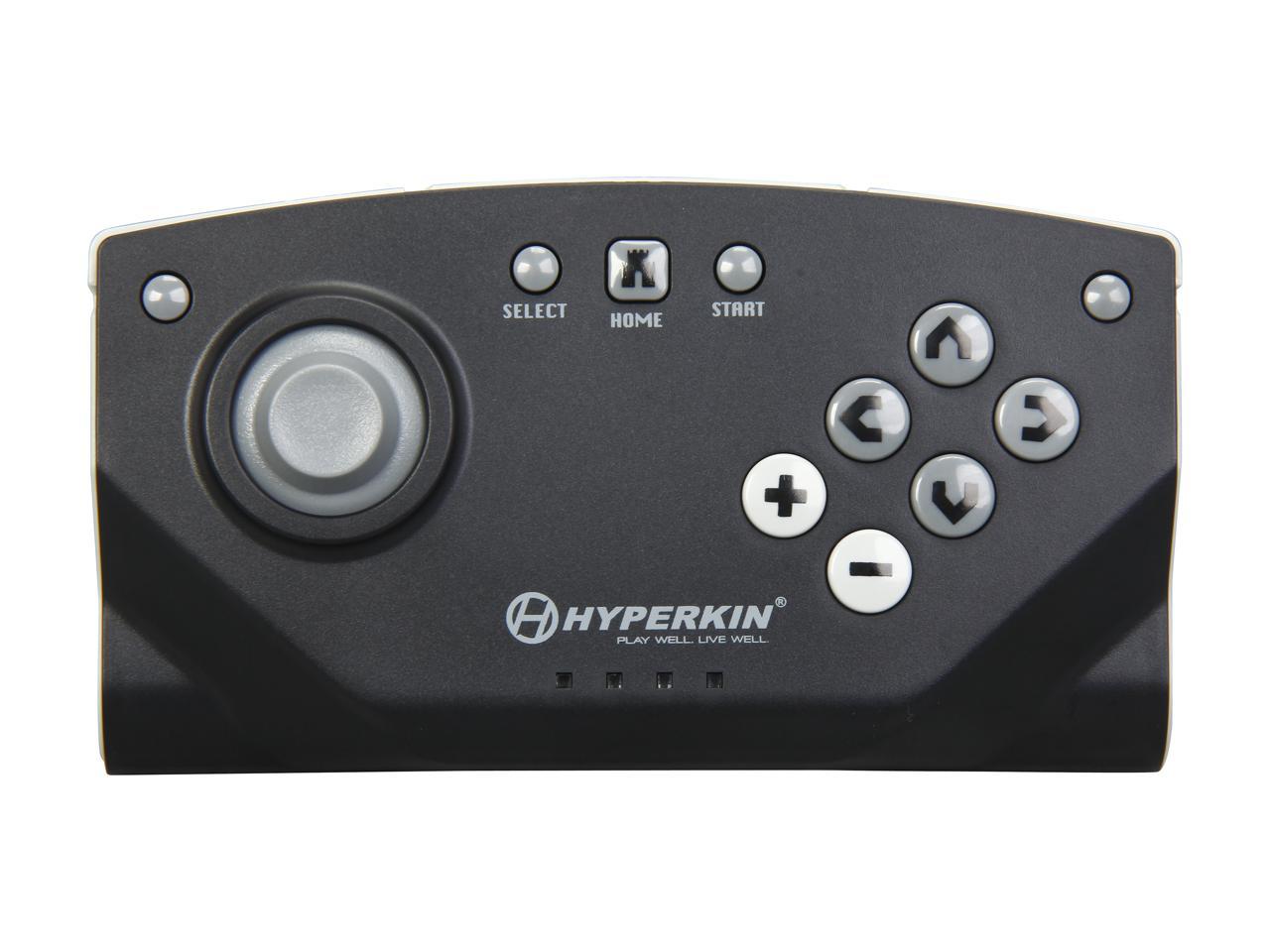 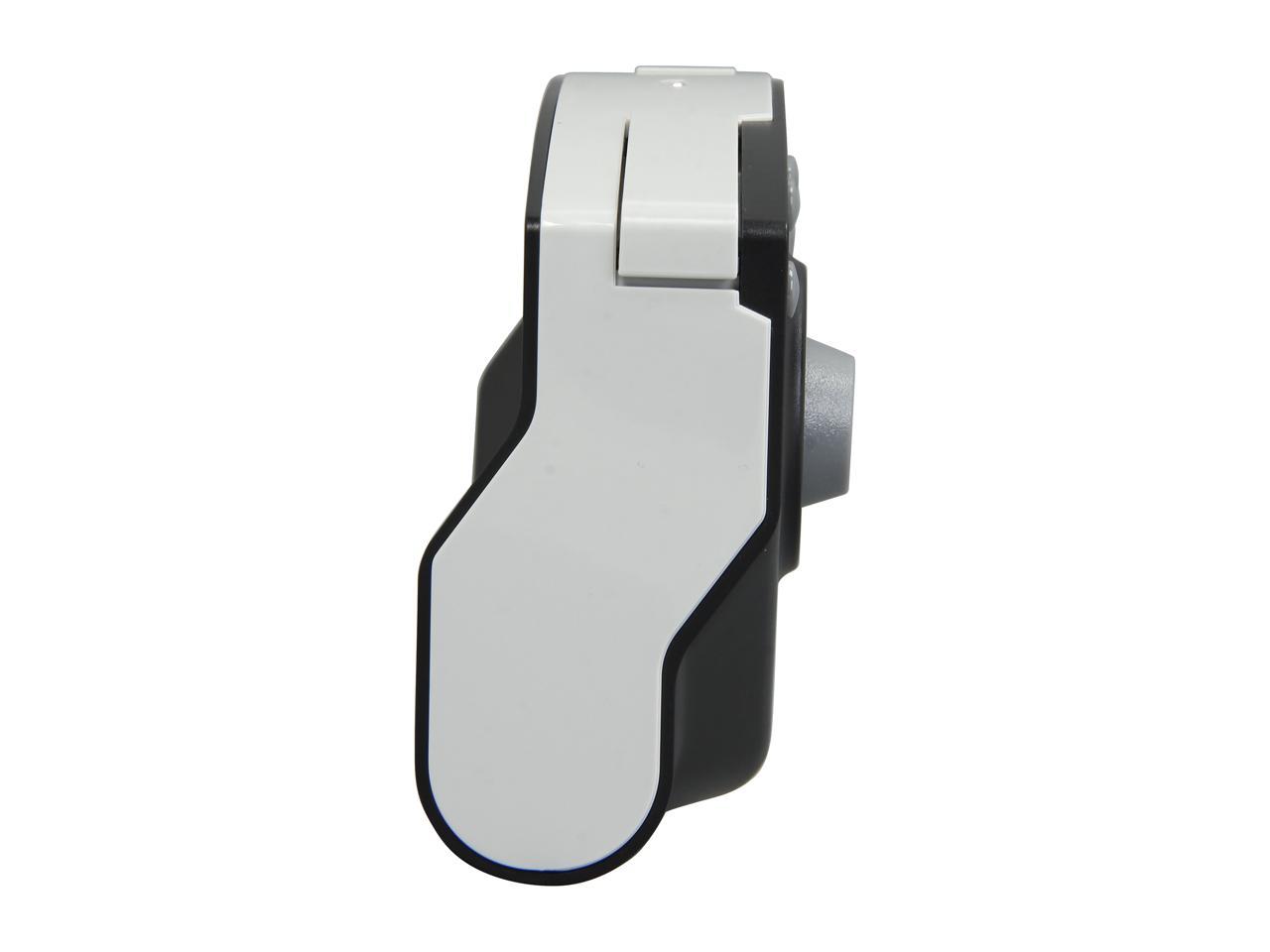 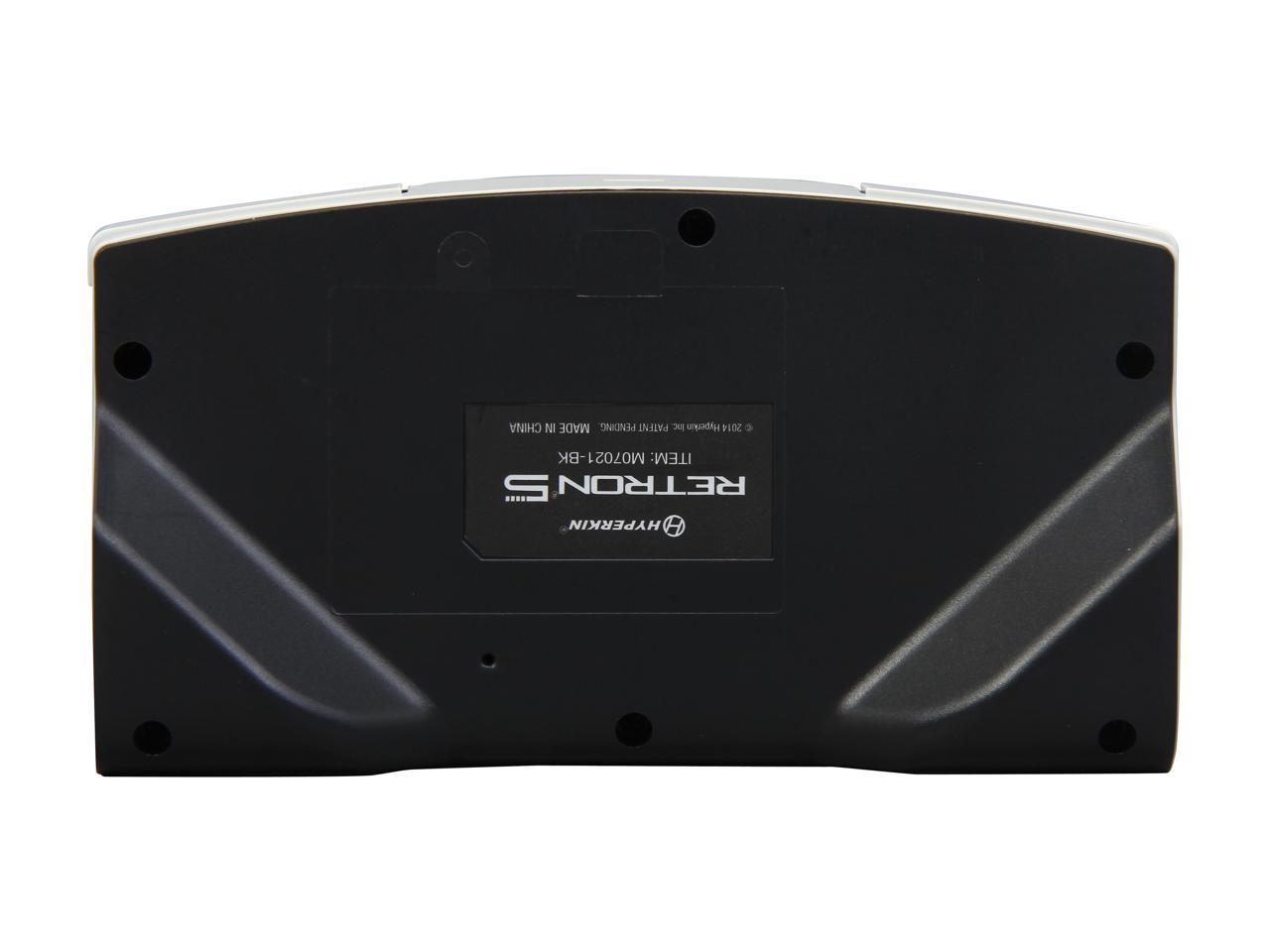 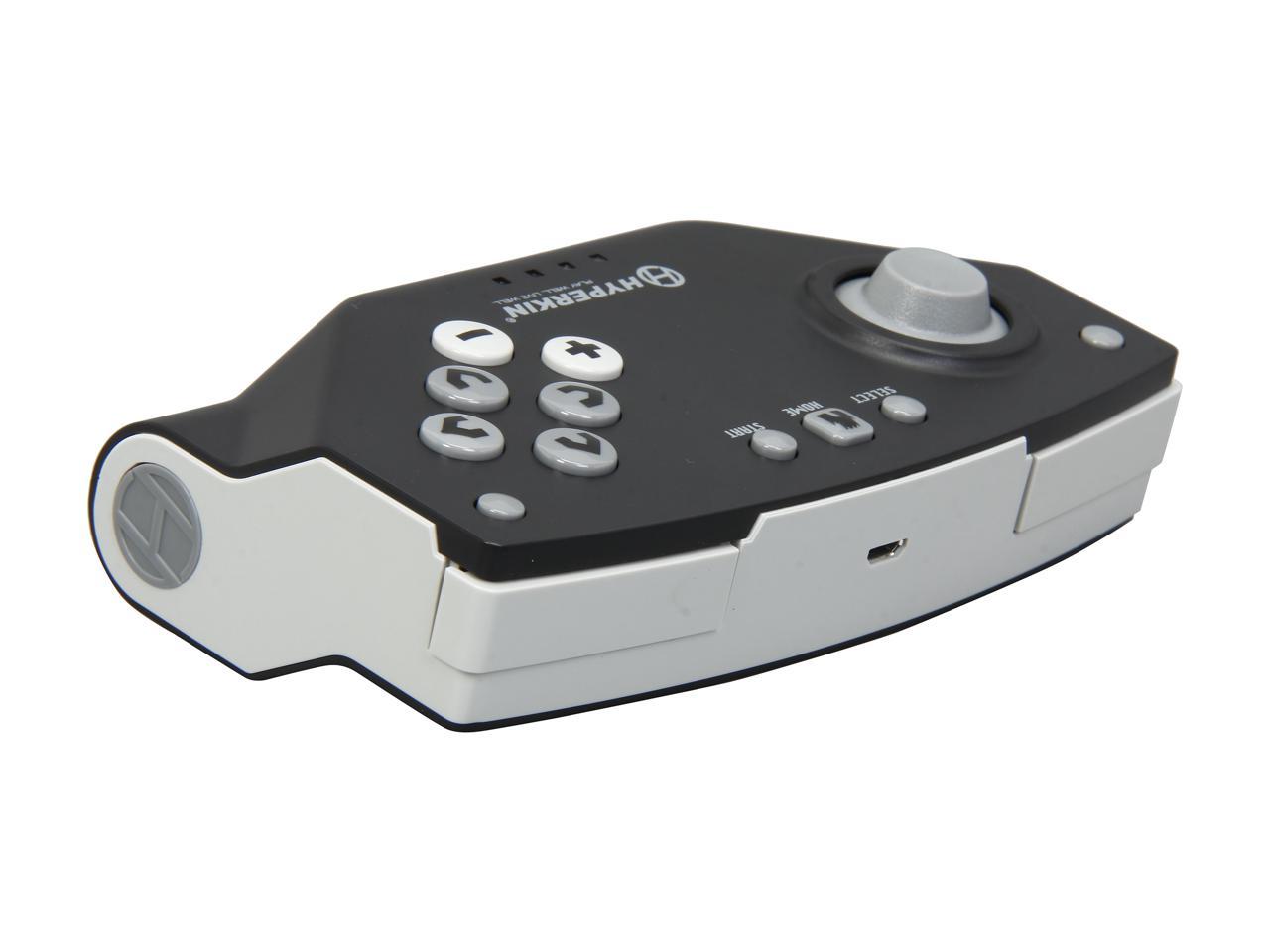 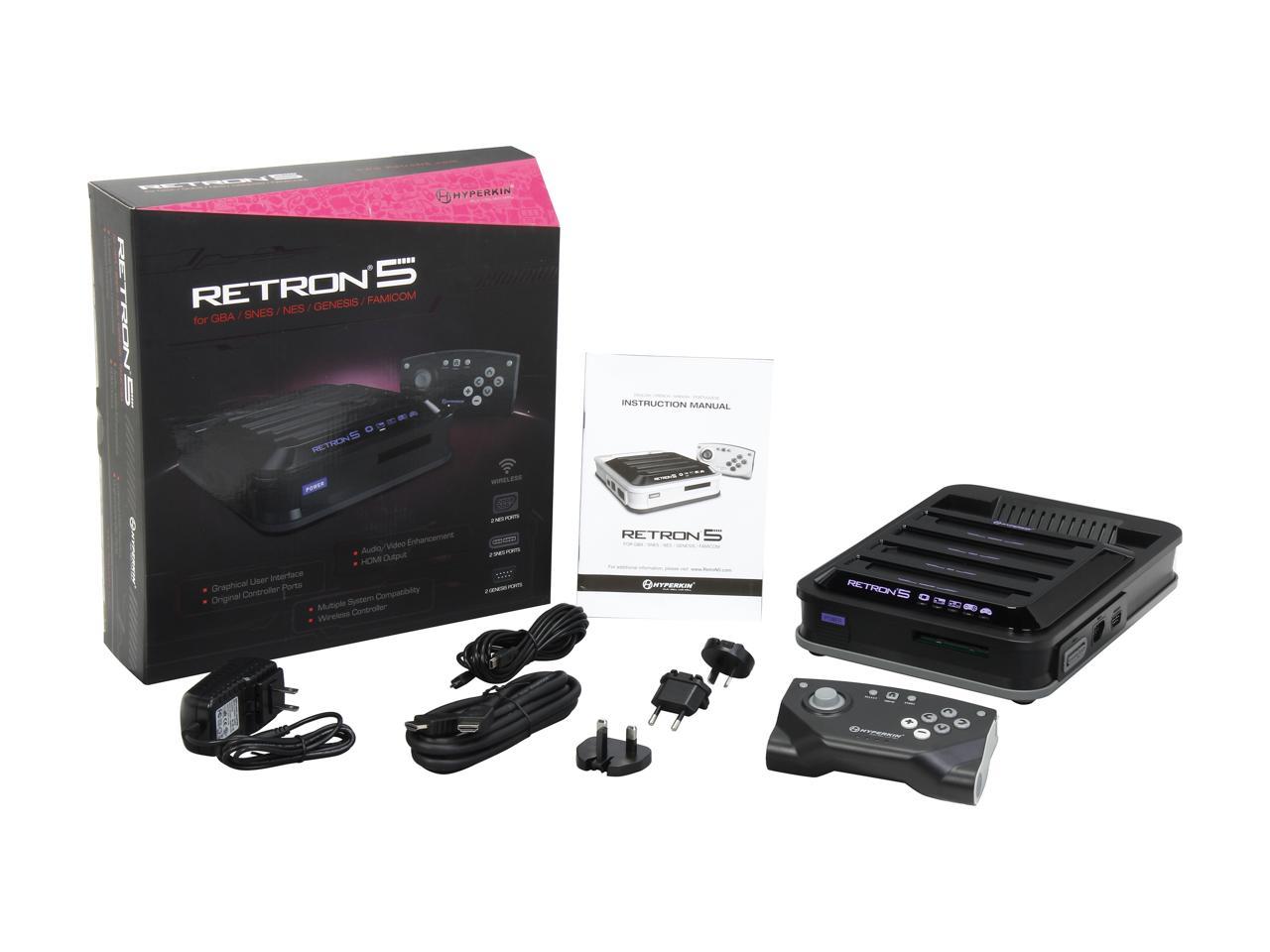 
Play all your classic games with the modern amenities current generation gamers enjoy, such as saving your games, enhanced audio and video, and the ability to customize your gaming experience through the use of a digital user interface in full HD glory with the RetroN 5. Pros: Plays all your older games on your flat screen via and HDMI output and looks great!

Overall Review: If your been looking to play your old cartridge based games on your new flat screen TV this is it. Stopped working 6 months in called Hyperkin and they sent out a replacement, The replacement didn't have any screws in the bottom of the unit and didn't read games. Called again they sent a second replacement unit, this one turns on but none of the inputs work, clearly a refurb as well the case is heavily scratched. When it works its great, spent the last 6 months trying to get a working one from Hyperkin. now that factory warranty is out contacting Newegg. You had best spend the extra cash for the 3 year warranty, this thing wasn't built to last and trying to get Hyperkin to just send you a new unit is like pulling teeth.

Pros: Nine different cartridges you can play on this device, plus it will read USA, Europe, and japan famicom. easy to update firmware plus you can buy the controllers if you don't like the wireless controller it brings.

Cons: Not really a con but the buttons on the wireless controller are some what flimsy, Read the forums on the retron 5 concerning the death grip since theirs a updated version. this does not impede operation. works fine for me.

Pros: -HDMI video is crystal clear on large TVs -Booted up and worked great on the first 10 or so games I threw at it. (Mostly NES/SNES) -Video options are a nice like adding filters. -It has the ability to save game states with just a push of the button on the controller.

Cons: -The controller's movement stick is a bit wonky at first. The box has the ports to plug in the original controllers. -The controller seems a bit cheap but it works pretty well.

Overall Review: I've heard some negative reviews about updating the unit since you have to use a SD card. The unit has been working straight out of the box so I'm going to update not unless needed in the future.

Pros: Plays MOST of a whole library of classic and not so classic games. Easy to use. Filter options. Upscaling. Updatable.

Cons: Made from pretty low quality plastic. Some games do not work. It is an emulation system and not the original hardware.

Overall Review: If you're into retro gaming and would like a lot more shelf space, less cable clutter, and the ability to play most of your games upscaled for hd, then buy it. If you're an absolute pixel purist and can't stand the idea of playing on a flat screen/emulator, then buy it and resell if you really don't like it. Good buy.

Pros: I received the black console from September 2013's + Plays Genesis, Game Boy, GBC, and GBA as it says it does (at least the ones I have tested so far). Update 6/20: Stop recognizing Nintendo and Super Nintendo games most of the time. After firmware update and factory reset, issue persists. If I take out and re-insert, I can usually get the cartridge to recognize after a random number of attempts. + Save states! This is my favourite feature + Easy set up + Well constructed (Plastic but feels as solid as the older consoles) + Super Eagle emulation option makes old graphics look smooth and crisp + Bass boost, an unexpected bonus. Nice touch. + Seems to play most games without a hitch most of the time. I had one freeze so far but had saved the game. + A lot of customization available on the launch menu + Original controllers work well if plugged in at boot-up, including the NES Advantage on one player. Sometimes switching controllers may 'confuse' the system or take a moment to figure out the chance. + Top loading for NES is better than the front loading system for the most part. + International outlet adapters included + Saves space not only under the TV, but also on the powerstrip. Saves energy and heat with power supply.

Cons: - Instructions for updates and troubleshooting are not in the manual and difficult to follow online unless you have extensive knowledge with computers and file transfers. The learning curve is a bit steep, but if you're determined, you may be able to get the updates to install. Otherwise it's a call to Hyperkin and/or redo many steps. - Some glitchy speed-ups/lag on a few games like GunSmoke. Sound issues after saving Castlevania GBA game but kicks in after a moment. Could perhaps be rectified on firmware update? - Doesn't have A/V RCA outputs like in the original design. I bought a Mini HDMI to 3RCA Composite AV Converter that works well for my older TV - Wireless controller clicks like that kid in class with a mechanical pencil who can't get the lead out. Oddly shaped. Not really user friendly but functional. - Took forever it seems to fulfill the pre-order, was promised dates and was delayed on at least 3 occasions. No direct customer communication on delays. This is probably solved now that it's been launched - Price hike? What's up with that? Mine was pre-ordered when it was $99, I think this was fair and reasonable for the system.

Pros: - Nice custom interface to play all those classic carts at a moment's notice. - Great support for original input devices. Didn't try any light guns though. - Plays SNES and NES games (even those weird unlicensed NES carts) pretty flawlessly from what I can tell. - The cheat database is awesome, but you might put on too many cheats at once and lock up your game. - Great to be able to connect to a modern TV without worrying about converter boxes and whatnot.

Cons: So, this is where the "seems" part comes in to play. I think I got a bad unit and I couldn't really keep and enjoy the Retron as a result. - I could not play ANY Genesis game I owned for a significant amount of time. I was able to play maybe 5 minutes of one game one time - Every other time, the Retron would: recognize the cart, load the game, and lose contact with the cart before I could get to the play menu. I tried a series of games ranging from Sonic 2 to Chakan. All did the same thing, except Shinobi 2, which is what played for 5 minutes, but then had the cart detection problem going forward. If I touched the cart or bumped the Retron, the system would try to read the cart once more, but lose it again like before. - Customer support via e-mail was lacking and then basically non-existent. I sent one support email and got a reply more than a week later telling me that it doesn't seem like a hardware problem since the system isn't reporting that it's a hardware problem and that I should upgrade the system software. Despite being dubious that my issue was s/w related, I gave it a try. Still didn't work. Wrote support again (I work during their support hours so I couldn't call) and never got a response (approaching 3 weeks now). In the absence of a response from support, I tried a newer firmware with equally disappointing results. - I get why the do this, but software upgrade process is awful. You can't just download a patch to an SD card and load it on the system. First, the system needs to generate a request file that is saved on the SD card. Then, you need to upload said request file via PC to their site. Next, download the update on your PC, and copy/save it to SD. Then you need to put the SD card back in your Retron and TRY to load the SD card. - I ran into a few instances where the Retron would not detect my SD card without completely restarting the unit. - The bundled controller is kind of awful. If you have any classic controllers, use those and remap the buttons if you have to.

Overall Review: Despite some of the system's quirks, getting what seems to be a defective unit, and being unable to get timely support, I still really like the idea of the Retron. So I've RMA'd my device with Newegg and am hoping to get it replaced. If I do get a replacement in a decent time frame, I'll try to come back and update my review, if possible. I feel kind of bad leaving a review rated this low since I really like the product and think it has all sorts of potential; however, I was/am pretty disappointed in the whole thing and I wanted to let other people know how the Retron 5 experience went for me.

Pros: The Retron 5 has capabilities well beyond that promised by the manufacturer. Search Youtube for these extended features.

Cons: Although the included wireless controller works fine, I prefer the more-comfortable SNES controller. Parts of the instruction manual could have been written better. The system only has HDMI output. I would have liked to have composite as well to use with older TVs.

Overall Review: When reading reviews about the Retron 5, it’s important to note the year when they were written. The vast majority of negative comments were submitted in 2014. The first released model-version of the Retron 5 had some issues. There were problems with the cartridge connector-pins (known as the “death grip” that is often experienced with cartridge-based console clones), the plastic top was too thin and flimsy and there were several games that would not play. With the latest version, currently sold by retailers, Hyperkin has effectively addressed these issues. The cartridge connectors have been improved and seem to work fine (keep in mind that I’ve only had the unit for a short time). Note: If you remove the cartridges by first lifting on one side, as shown in a video on the Hyperkin website, they come out without a problem. The plastic top has been re-designed to be sturdier and Hyperkin has released multiple system-updates that, among other system enhancements, have enabled the Retron 5 to play games that previously did not work. Also, Hyperkin has encouraged owners to let them know of any games that pose a problem so that a fix will be included in future updates. Hyperkin has stated that they are striving for 100% compatibility. All of the games, I tried, worked without any problems. As mentioned previously, the Retron 5’s capabilities far exceed those listed in the product description and instruction manual…and without any modifications or hacking (Again, search YouTube). It was these extended features that convinced me to make the purchase…and I’m very glad I did. I’m having lots of fun with my new, highly versatile, retro system.