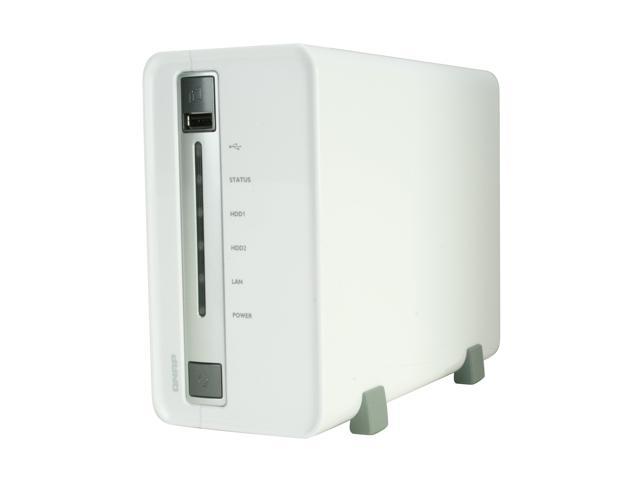 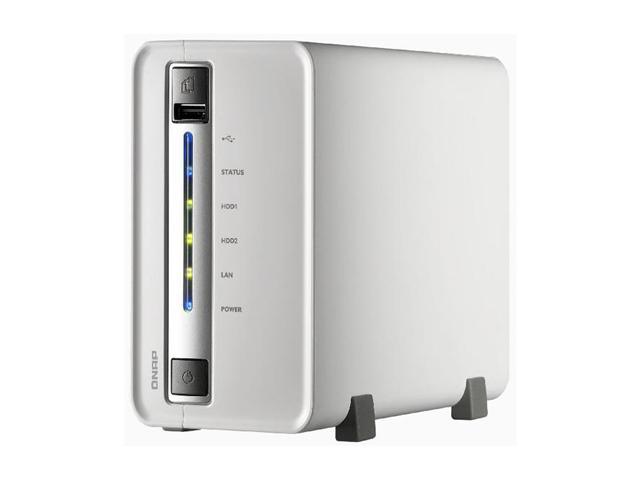 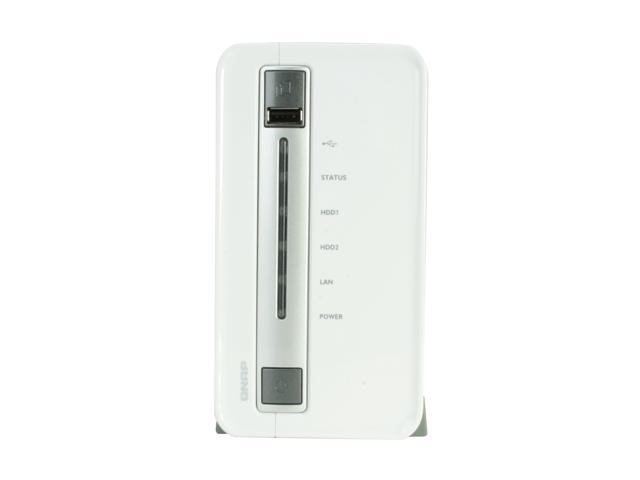 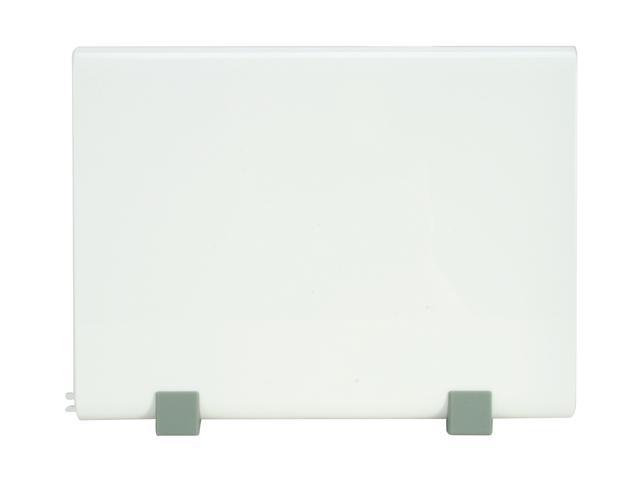 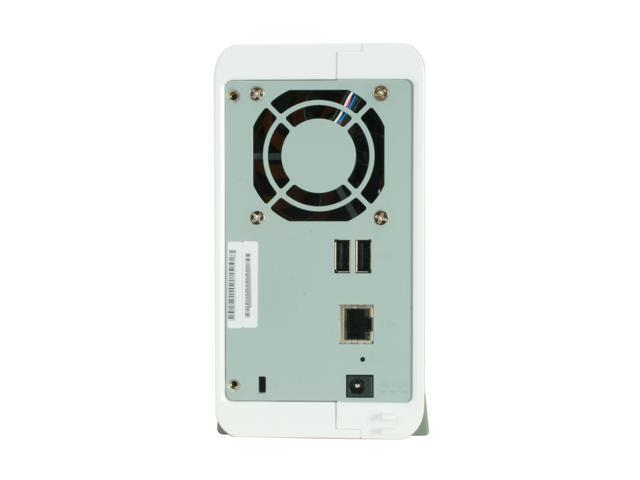 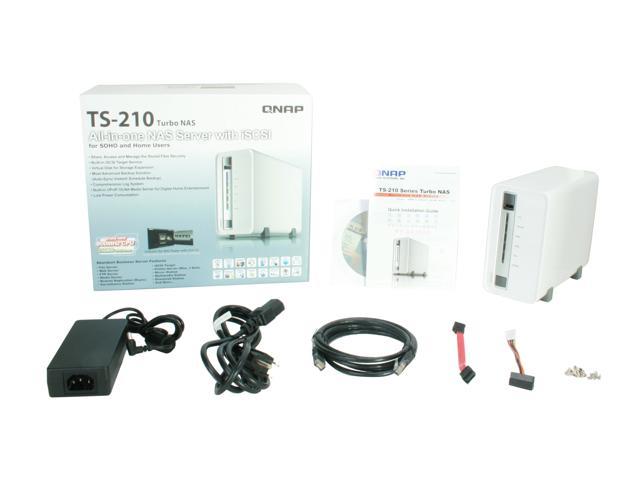 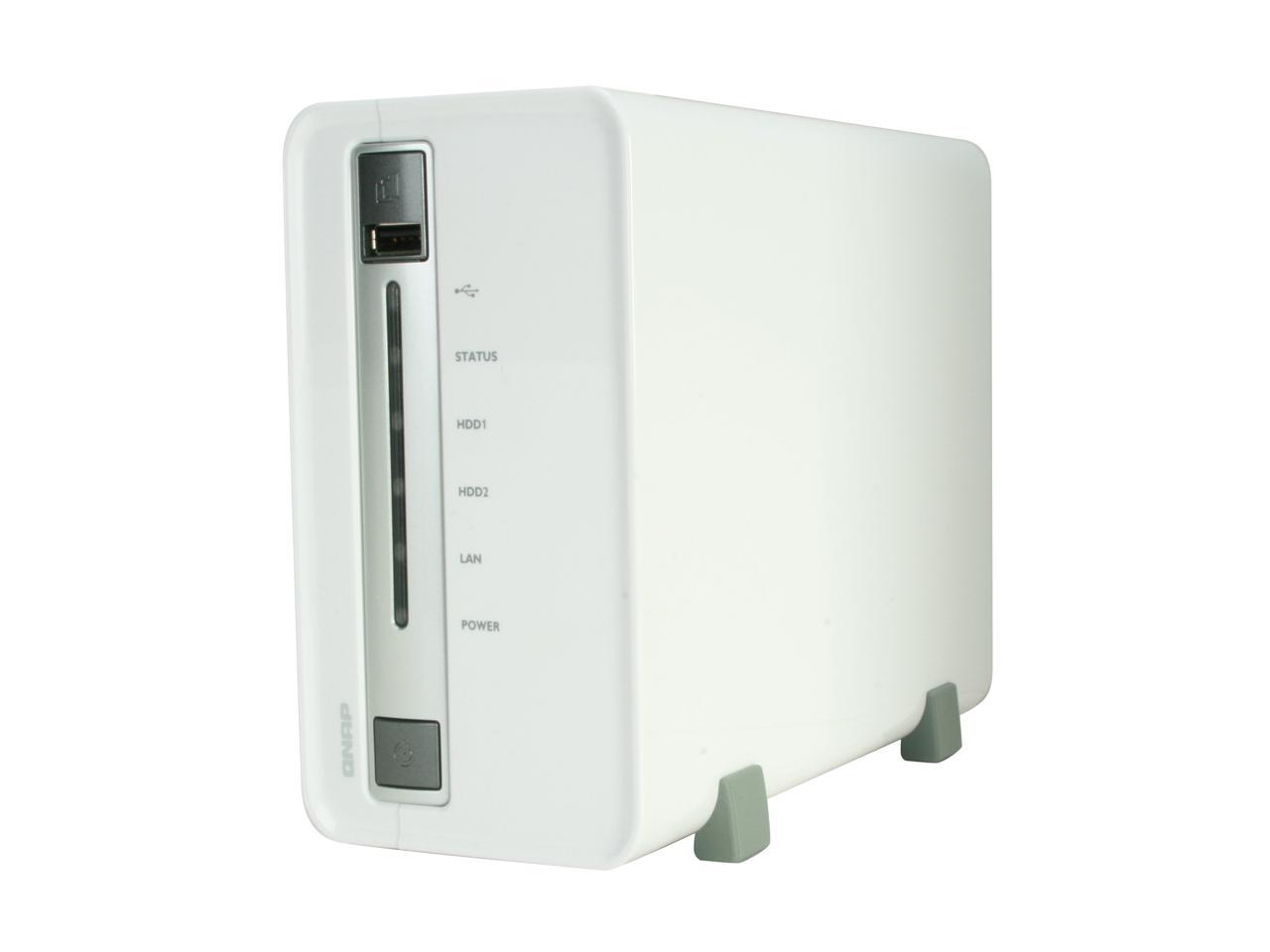 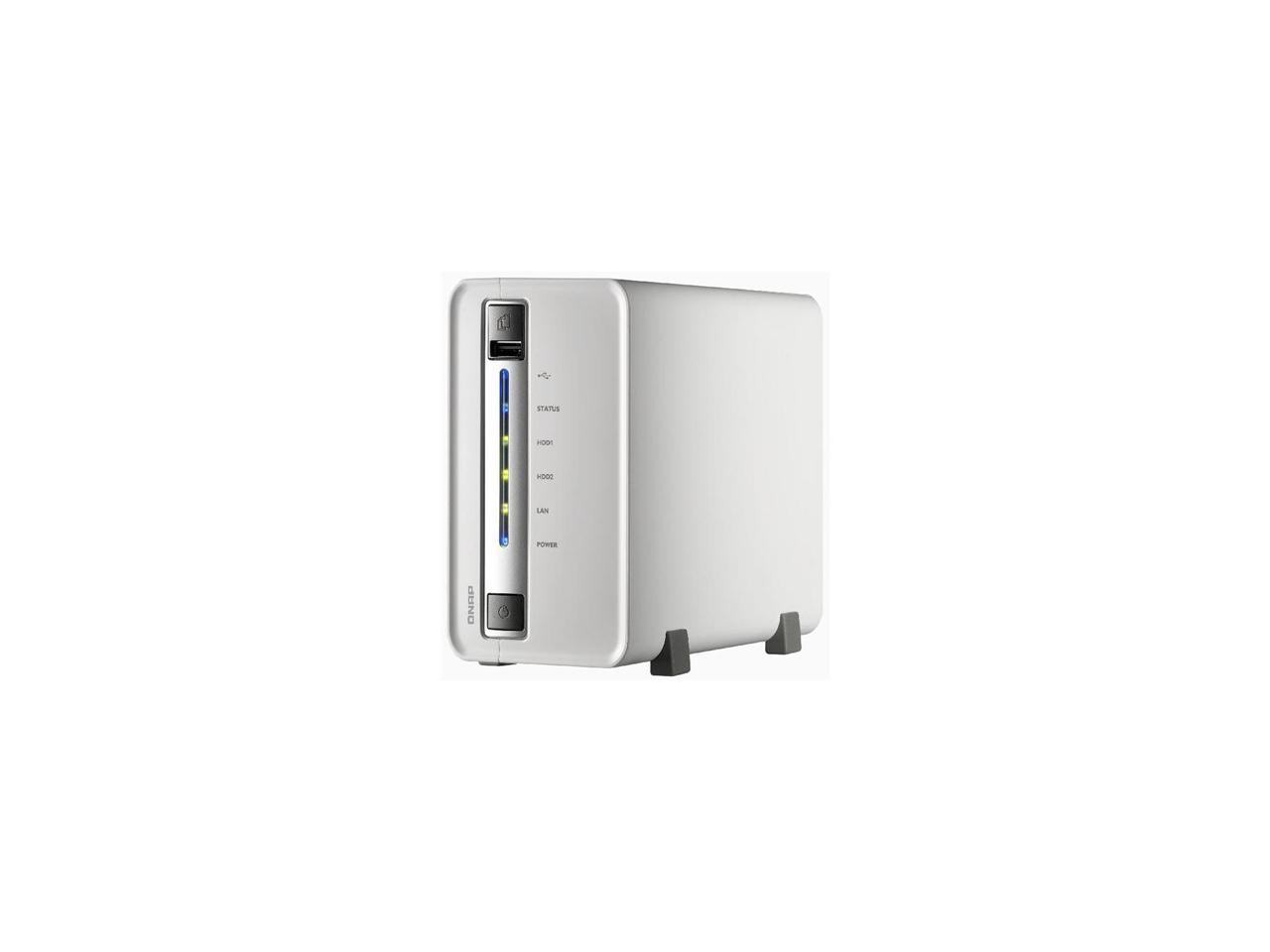 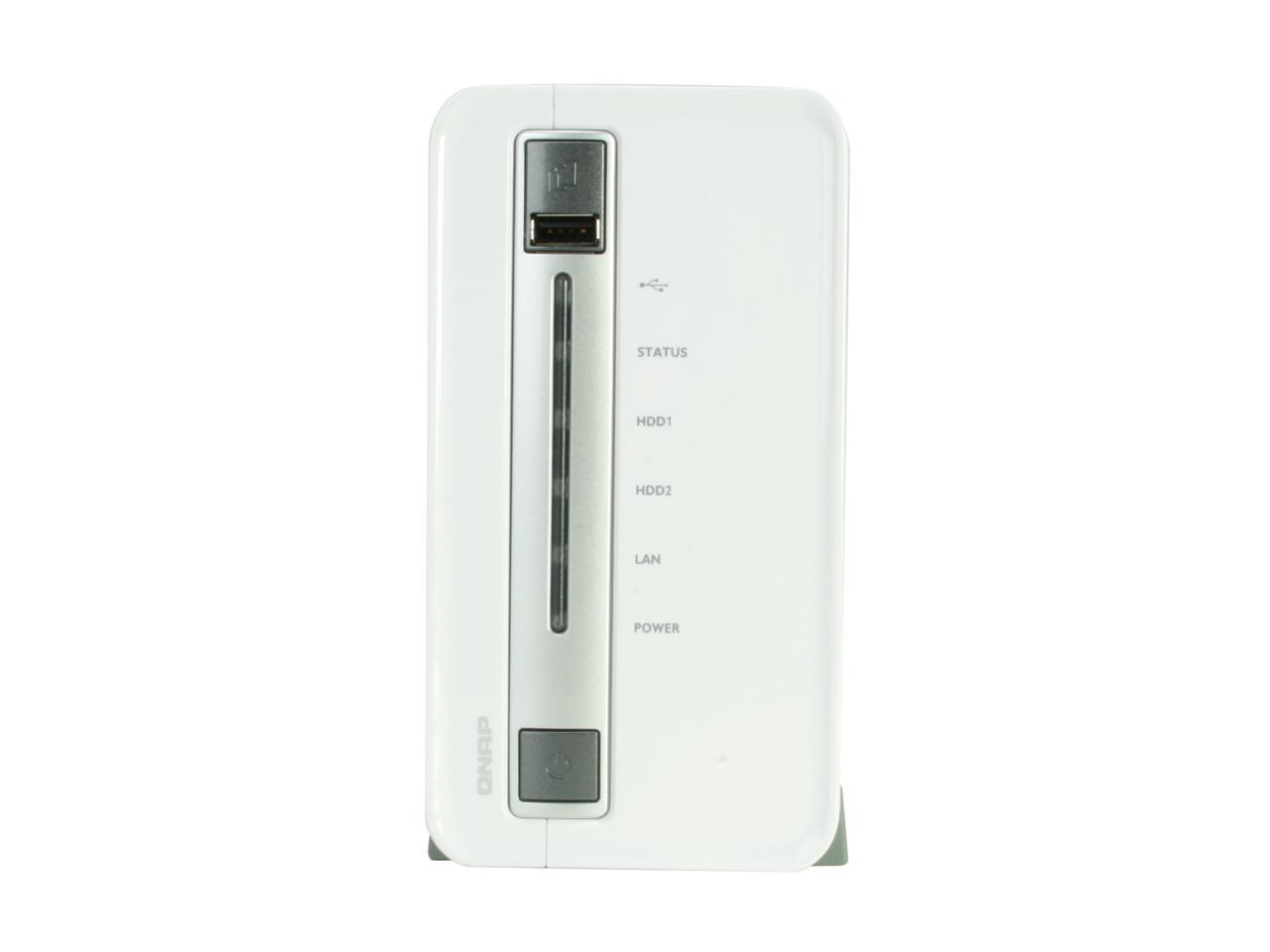 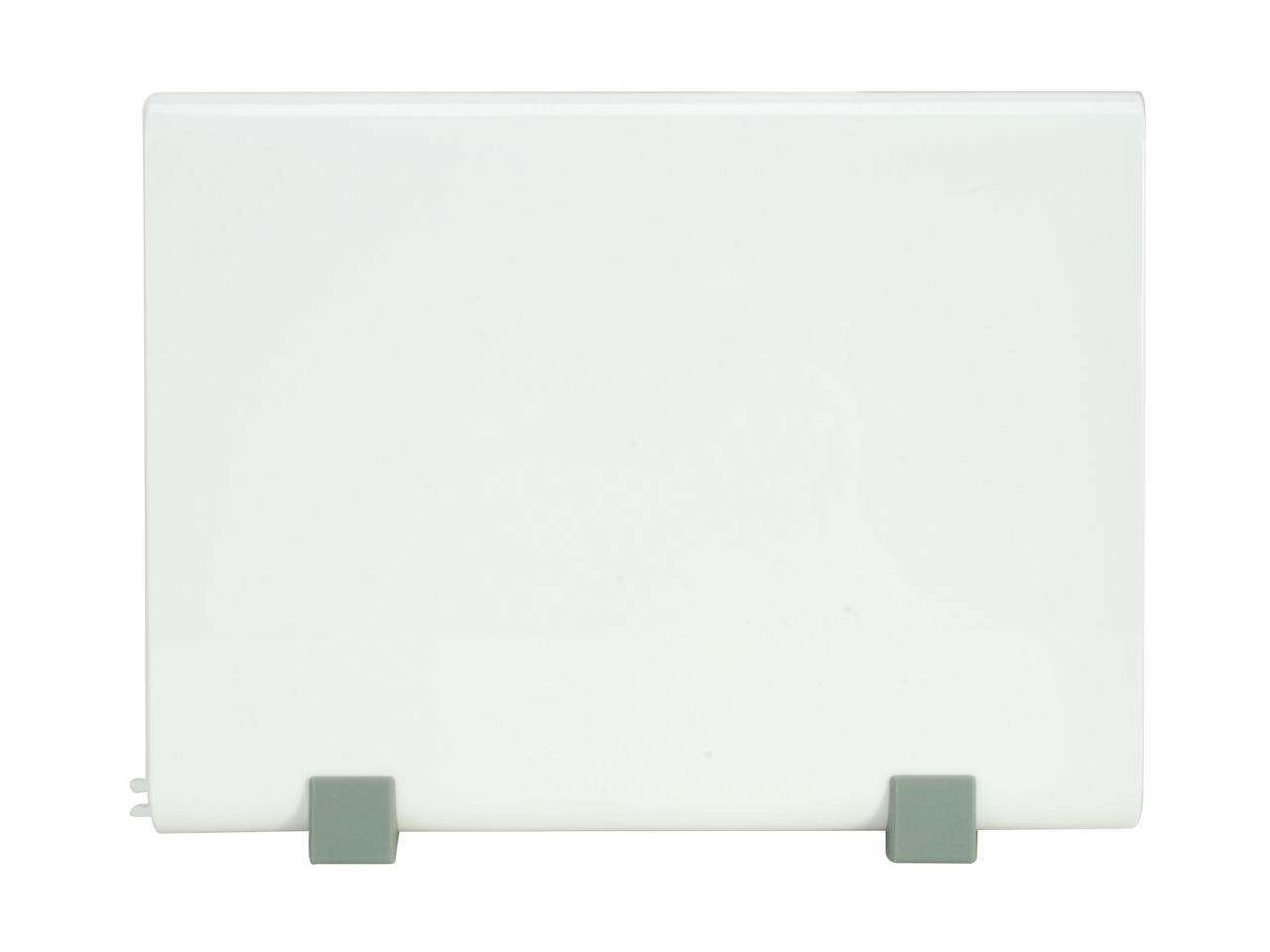 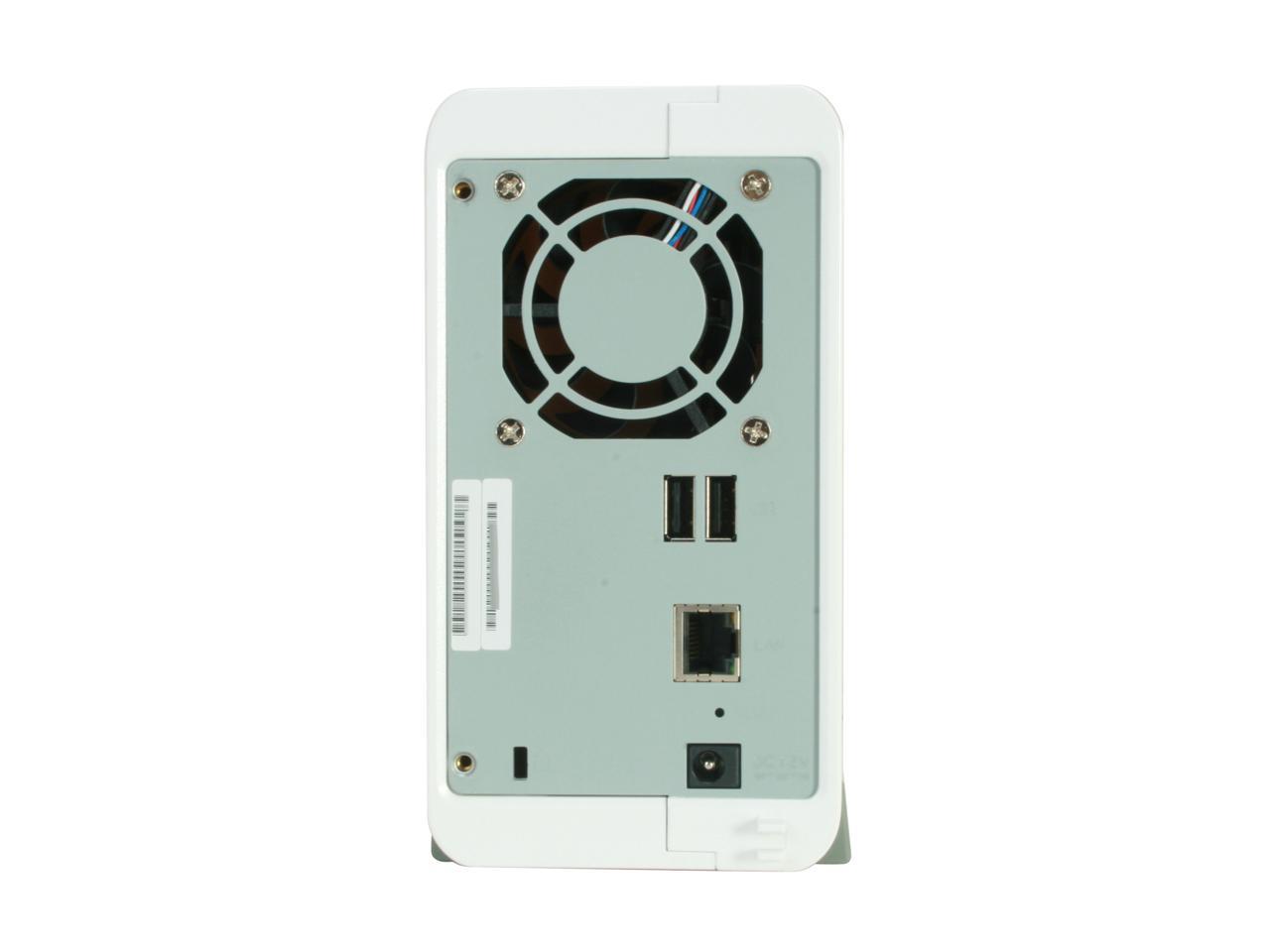 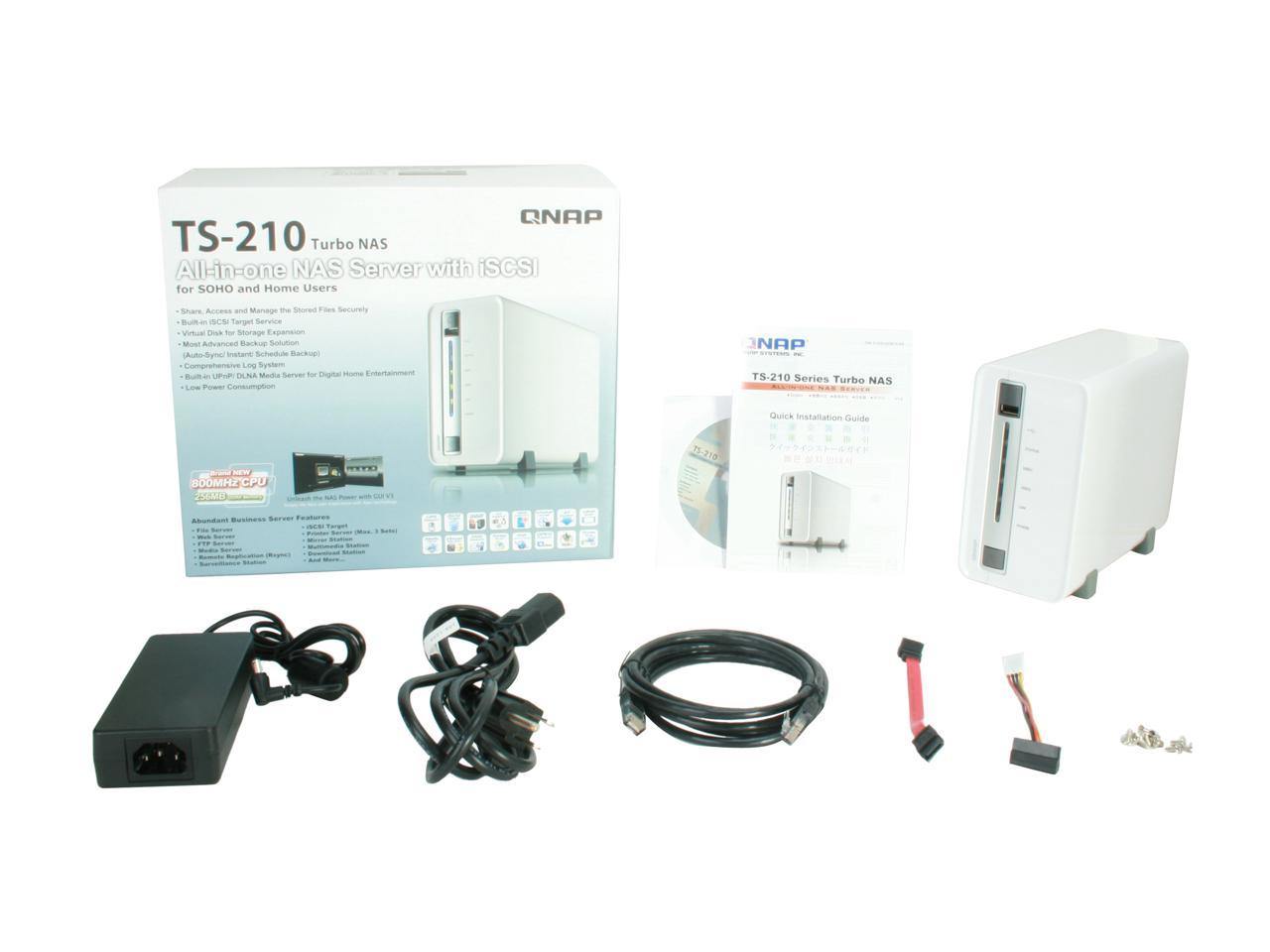 (1) Write a Review
OUT OF STOCK.
Overview
Specs
Reviews
The QNAP TS-210 Turbo NAS is the most economic two-drive storage solution for Prosumers and SOHO users who want a NAS with compelling features, solid performance, low power consumption and high reliability. The powerful dual-drive system can let you build the RAID 1 mirroring for hard disk redundancy.
The TS-210 Turbo NAS is not only an ideal storage server but also an all-in-1 application server. You can easily store and share the files to Windows PCs, Mac, and Linux/Unix over the network. The built-in server features include Web Server (with PHP & MySQL supported), FTP Server, P2P Download Station, Surveillance Station (with monitoring & recording for up to 2 IP cameras supported), iTunes music sharing server, UPnP DLNA server (built-in TwonkyMedia) for multimedia files sharing, Printer Server, etc. with great storage capacity expandability over the network by VDD function. Managing the NAS is extremely easy. The AJAX-based graphic user interface allows intuitive management of all the Turbo NAS features.
Incorporating a Marvell 800MHz CPU and 256MB DDRII RAM, the power consumption of the TS-210 Turbo NAS in operation is only 14W which is much less than that of a PC. The TS-210 offers features more often found in much higher end NAS servers, including built-in iSCSI target service, policy-based unauthorized IP blocking, SNMP (Simple Network Management Protocol), remote replication, a Gigabit LAN port, and 3 USB ports (the front USB port includes an auto-copy feature).

Learn more about the Qnap TS-210-US

Pros: Impressive demonstration video of the AJAX management web interface. Too bad I never got to see it in action for myself after owning the product for more than a month. Seeing as I never got to use this product to observe for myself the positive qualities of this product I will use this space to relay my experience. Rep that contacted me via email offered advice that was available in the public web forums. None of the troubleshooting methods solved my problem, but his communications seemed to indicate he wanted to assist me. When I received unit back from RMA in same condition as sent I was passed to a second troubleshooting rep when I contacted QNAP and questioned this. I requested information about repairs made to this unit and after 4 days of no response from QNAP rep I decided to warn others by relaying my experience with QNAP. Their product never worked for me and they did not replace or repair when they had the NAS physically in their hands.

Cons: I installed 2 ST32000542AS Hard drives which are on the manufacturer drive compatibility list. NAS required firmware to be uploaded after drive initialization, but whenever I tried to upload after initialization it kept bringing me back to the hard drive initialization web page. I decided to SSH into the NAS and inspect the DMESG logs. After HD initialization "rejecting I/O to offline device" appears repeatedly in the dmesg log. After exhausting suggested troubleshooting advice from QNAP rep I sent this in for repair or replacement. Unit came back with no documentation on work performed and still had the same issue that it had when I sent the unit out. After 15+ hours of troubleshooting to an unsatisfactory conclusion I have formed an opinion of QNAP and will never purchase or suggest any of their products ever again. The Hard drives installed in the NAS are fully operational in both Windows and Linux computers with no issues what so ever reading and write large media files.

Overall Review: I am requesting my money back from Newegg. I urge you to tread cautiously with QNAP products. I read negative reviews on newegg and other web forums regarding QNAP, but decided to take a chance with QNAP anyway. Now I regret my purchasing decision as I now have an expensive doorstop. If you decide to purchase QNAP anyway I sincerely hope you do not regret your purchase but I am done with them.