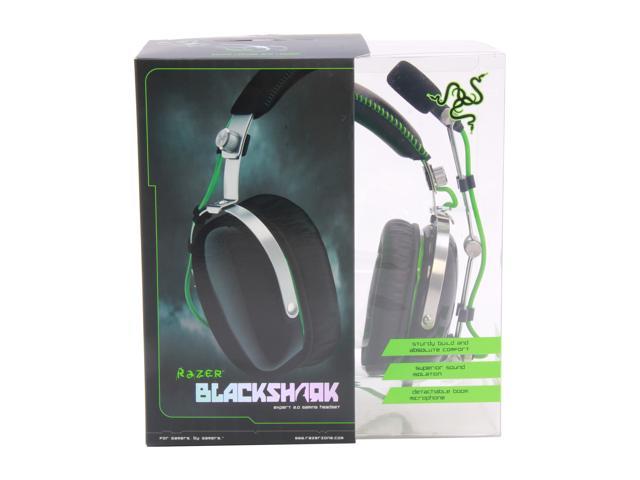 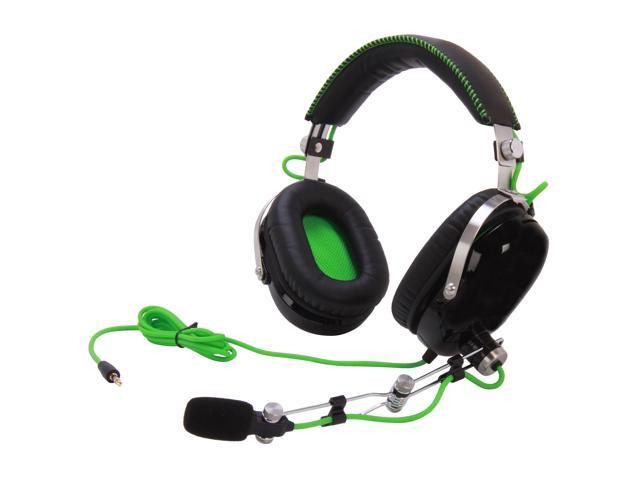 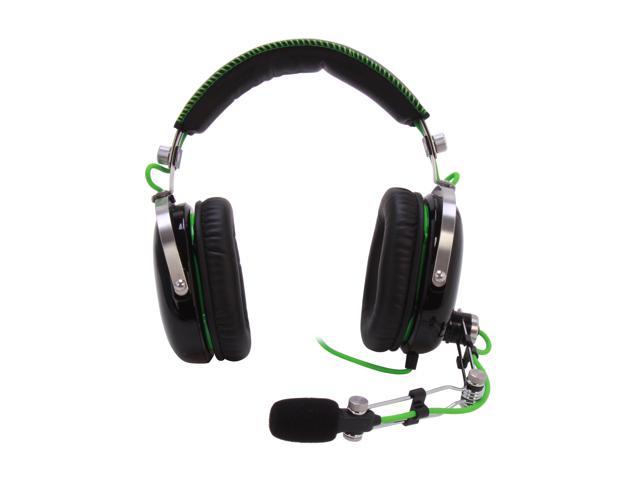 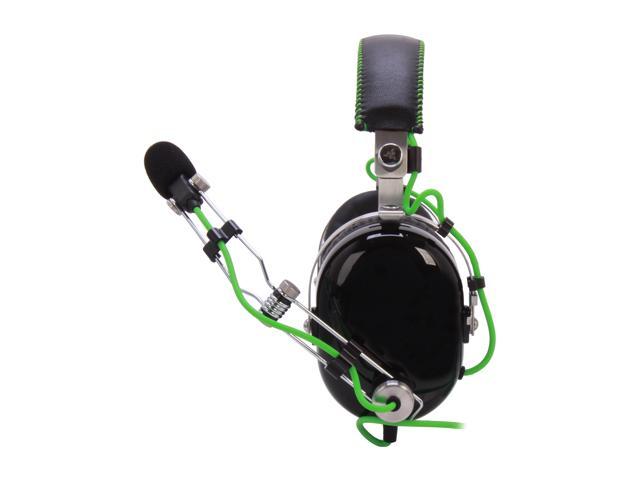 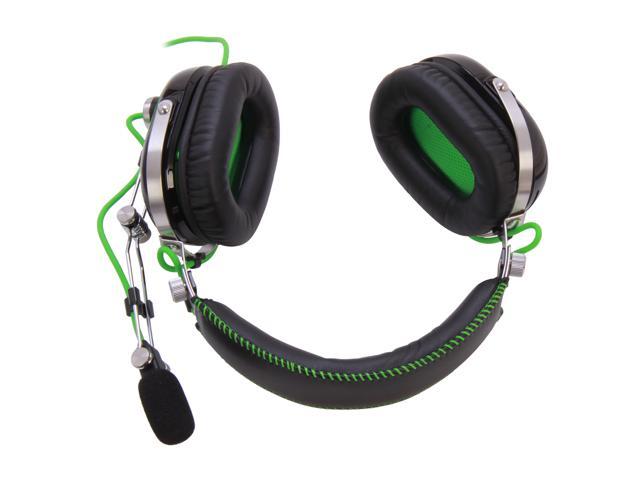 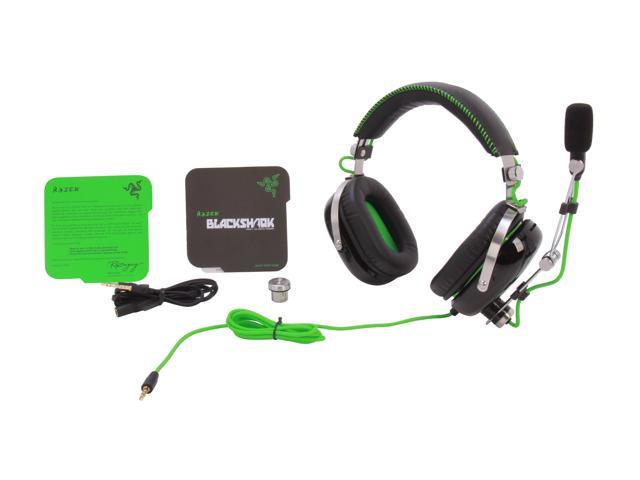 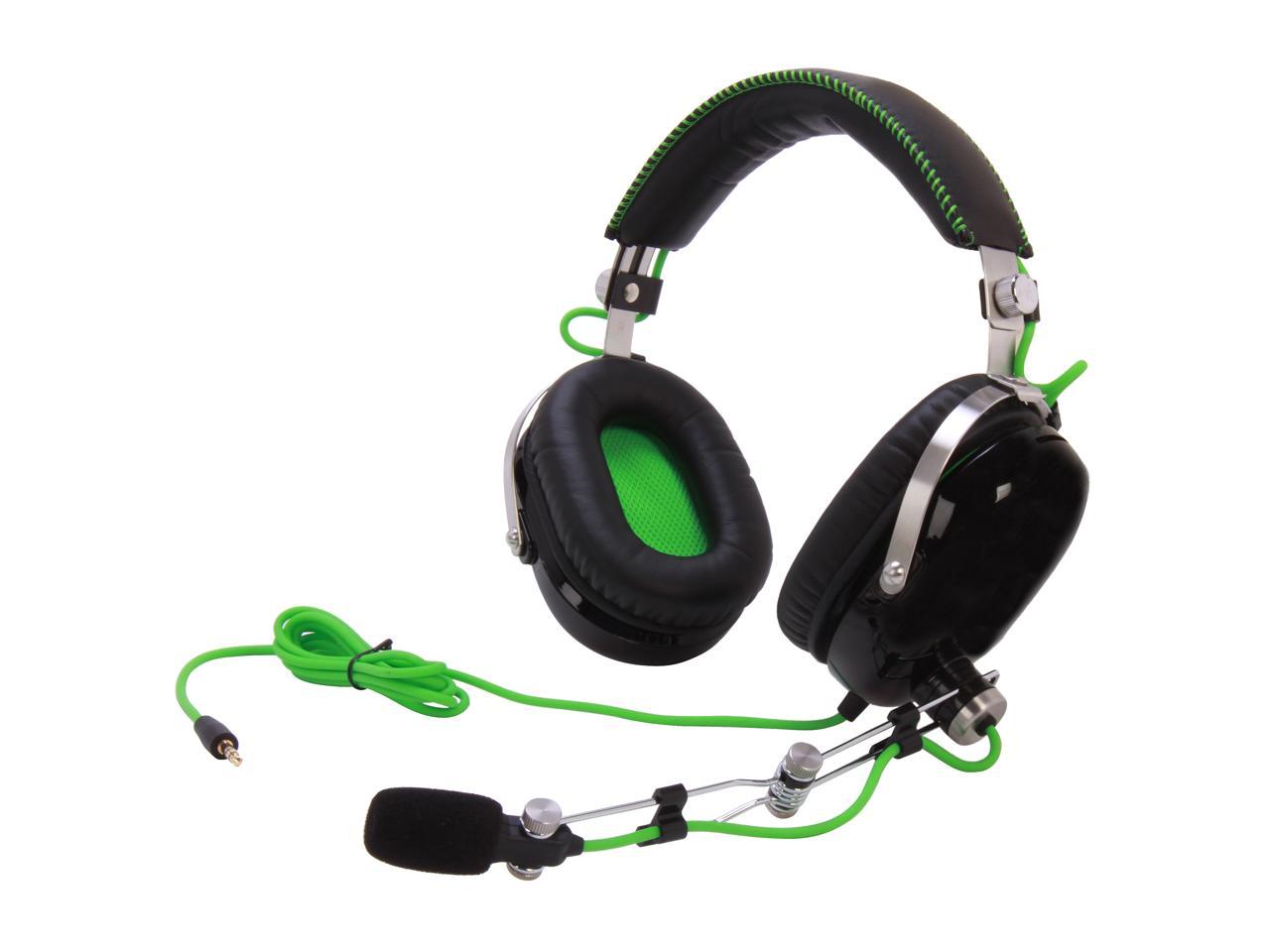 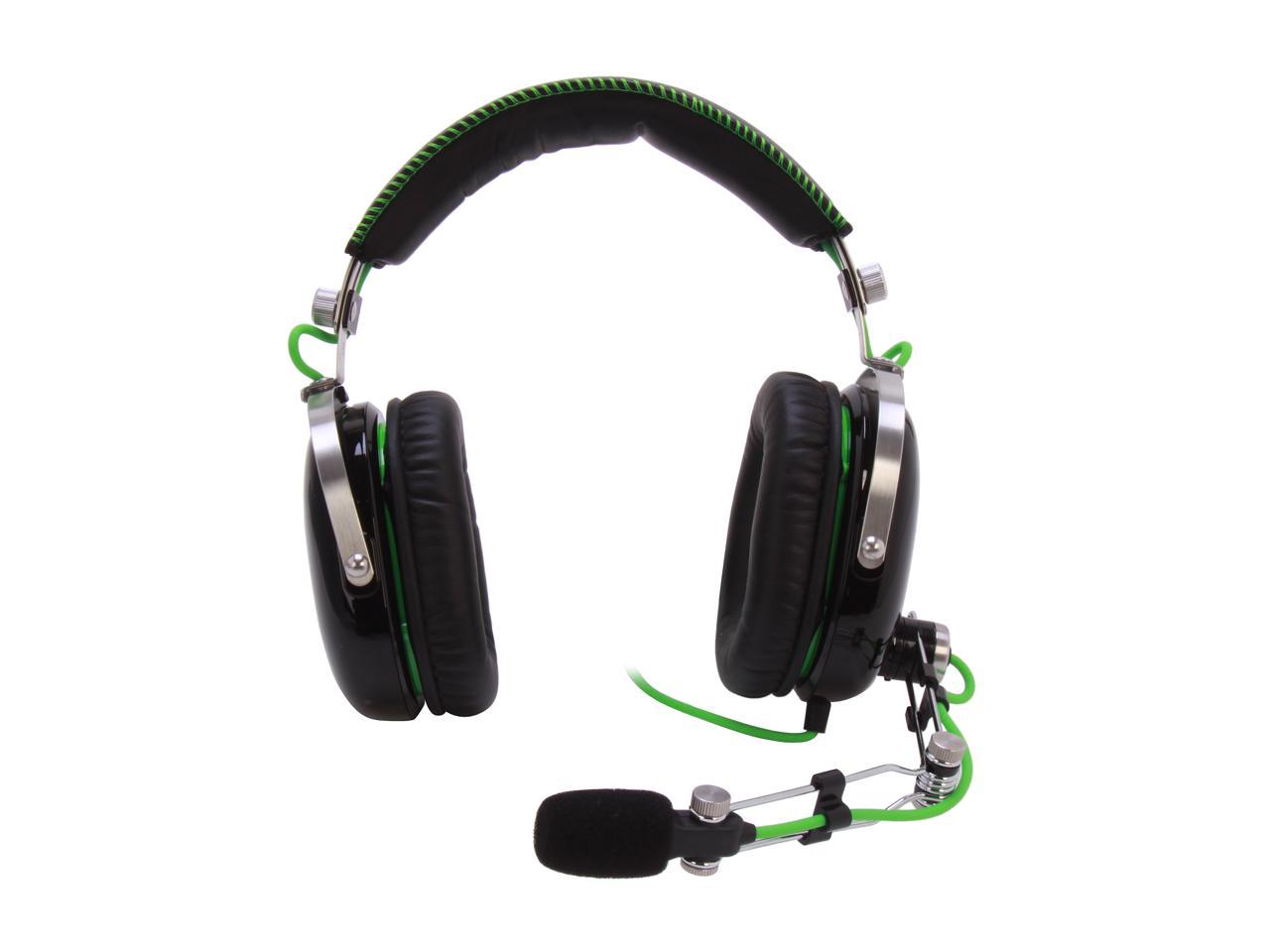 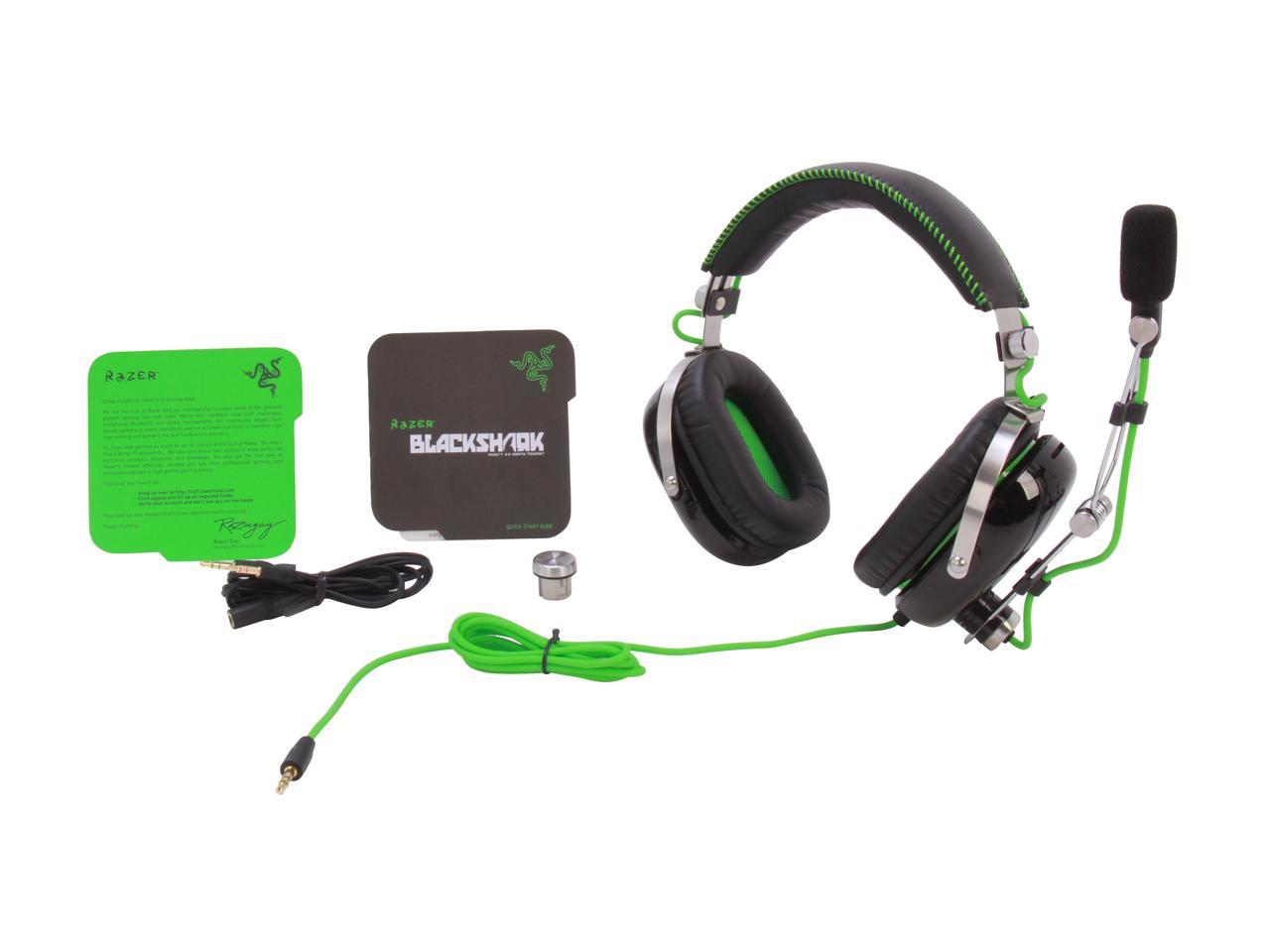 Learn more about the RAZER BlackShark

Cons: There is a slight rattle in the right ear when I move my head, even when I'm not moving excitedly.

Overall Review: For my own use, this is perfect. I am very hard of hearing and I was concerned that after I got these I might not be able to hear properly, but that is not the case. they fit comfortably over my ears and are loud enough (with proper windows volume adjustments) that I can hear well even on Vent. Not having the inline volume control that some others have is not an issue at all and the only reason I took one egg off is because of the rattle.

Pros: Durable, good look, solid microphone, nice green top cord matches my keyboard. Metal connector to ear piece rather than the garbage plastic other sets use. (Astro A40 Logitech) If you want a headset that isn't going to break with high quality sound then this is it. I searched for a decent headset forever and have failed until now. The microphone is easily moveable. Ear pieces are incredibly comfortable, I have heard some say that they are a bit heavy, which I can understand if you're not used to headphones. However, the ear piece itself is very comfortable, much more comfortable than the Astro A40 and this headset also cancels out noise much better than the Astro A40. The noise cancellation is close to the Logitech g930

Pros: 1) Beautiful headset, just really aesthetically pleasing. Even the boxing was gorgeous. 2) Sounds excellent. Honestly, I've never understood what people think they need $400 headsets for. The sound quality of a headset a quarter of that price is so amazing, I just can't justify it. If you're looking to get a great sounding headset, even if it's just for music, I think this one will do fine, especially if you're into electronic music. 3) Sound isolation is pretty decent. To be honest I'm not a good barometer for this because I've never head a sound isolating headset before. When it's on and there's no music playing, I can't hear much else in my office, not even my computer fan. When music is playing, though, the only thing you hear is the music, no matter the volume. 4) Easy to adjust for larger heads and it gets pretty small (I have a tiny head). 5) Cord is really think, durable. Jack is really stable. Just an overall really sturdy design. I'm not afraid to wear the headset outside at all, it feels quite durable. 6) Detachable boom mic sounds really clear, works really well, is very flexible despite not being a completely "spineless" design, where the whole thing bends freely. It's not hard to adjust it so that works well. 7) The mic-hole plug for when you take the boom mic out is cute and quite a nice touch. 8) It's extremely comfortable. It is an over-the-ear headset, which I had never had before, but I find myself really enjoying the earcups, even for extended periods of time (I've had it on for 5-6 hours at a time). The overhead band is really great as well 9) I found the money was definitely worth it for this headset.

Cons: The cons are basically what you'll see everywhere else: 1) I don't mind this at all, but I do acknowledge it is a flaw: there is no in-line controller. This means you can't adjust the volume of the headset via the headset itself, you'd have to control it on system the headset is plugged in. It also means that one cannot simply mute themselves with the headset, which is a little annoying 2) This isn't so much a con as just a quirk some many not like, and that is that the mic can only be placed on one side of the headset: the left side. If you want you can just turn the headset around, but some people might not want to wear it backwards. Again, I'm not bothered by this, just something worth mentioning I think. 3) This is a PC headset, and will only work with a PC. It has a special 3.5mm head that transmits both audio to the headphones but sends audio from the mic. This plugs into an adapter (which comes with the headset) which splits the channels into two other 3.5mm heads: one for line-in, or headphone, and one for the mic. Because of this system, it won't work with an Xbox or a PS3 (or a Wii...?). Then again, (I haven't tested this but I would imagine it works) one could simply buy a 3.5mm to 2.5mm adapter and plug it into an Xbox controller. Not sure how the PS3 works. 4) I guess the cords when it's all set up are sort of long an just strung out. I might have liked it better if the adapter wasn't another cord, and was instead a solid piece that had one input two outputs, but I guess they have to have some flexibility to ensure all PCs and sound cards would accommodate (though I thought headphone next to mic was pretty standard for most sound cards).

Overall Review: I'm really, really happy with this headset overall. It's absolutely gorgeous, definitely worth the money, the mic works really great and the sound is beautiful. I will note that the thing was packaged ridiculously...thoroughly. Even the "quick start" guide was wrapped. I'll also add a tip: if at first the mic isn't working, make sure the application you're using knows you want to use an external mic, as opposed to your, probably worse, laptop one, and make sure you have the cables plugged into the right slots.

Pros: Generally solid construction. I am ex-military and used headsets on the aircraft when maintaining them, and while not the real thing (because the real ones are amplified through the line and WAY more durable), they look pretty close. The speakers are capable of a pretty good range of sound, not to mention great software support with Razer Surround (you get an equalizer, faux-surround setup, etc) I tried a pair of similarly-priced Razer Tiamat (Stereo 2.2) that were really cool looking. And while the headband needs no adjustment when you put it on, the microphone caught all my background noise. And it was less flexible than I really liked. I give it a plus for being retractable, but eh. I can also use this headset with my phone!! Random plus.

Cons: They're a wired headset. I was trying to move from a wired setup to a very good wireless setup with a decent set of headphones. I tried out the Logitech G930 headset and while they had AWESOME sound (for being wireless), the Logitech software created a conflict with Razer Synapse 2.0. So I chose Razer Synapse over the Logitech Software. No point to keeping the G930s without software support (I love my EQ) so I returned them. A con of mine (personally) is that I don't have a live feed-back to how loud I am yelling into the mic to hear myself. These headsets are pretty good at keeping the noise out, but I can't hear what I'm saying sometimes.

Overall Review: None of these purchases were through NewEgg, unfortunately. But I like to share my experience. Suggested use: PC only. I also replaced the foam tip with a more custom/better foam tip that won't just 'fall' off. That may be a problem for others though. The ear cups are a little narrow/small. Not a problem for me, but if you have larger ears, you may want to look at another headset. This headset was a true upgrade from my dying/aging Turtle Beach X11.

Pros: Excellent sound quality, highs aren't too tinny and low's are more superior than most $300+ headphones. Additionally, the comfortability is high. Noise canceling is fair, not too bad but there is some there. Music, and videos excellent... Gaming amazing.

Pros: Comfortable for long (LONG) wear, good sound quality from the mic and speakers. I like the break away cable/splitter, it makes untangling cables very convenient.

Cons: Though I was super careful with it, the mic has stopped working. (Bought it in 2013, it's now 2015). There's no spare parts available and no repair services are offered. It's a pity I really like this headset but don't feel like spending another $120.00 for another 1-1.5 years of use.

Pros: I love the detachable microphone comfortable for long sessions decent sound quality (I have since started using audiophile headphones) The bright green accent of the wire is super cool rigid, solid build

Cons: Shortest lived headset I've ever owned. (the microphone started crackling out after about 6 months.) The extension with the splitter for separate audio/mic jacks kept popping off during games.

Overall Review: a pretty good headset, but not at this price.

Pros: Love the feel and look of this headset found it to be comfortable and look very cool as well

Cons: The faux leather ear pads began to wear out after a year and the seams inside the ear pads ripped exsposing the foam inside not that big of a deal as that can be expected after a year of constant use

Overall Review: Looks like a helicopter headset which is pretty cool