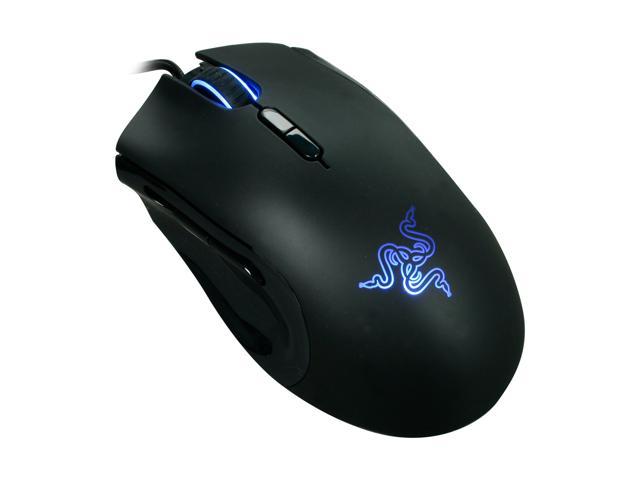 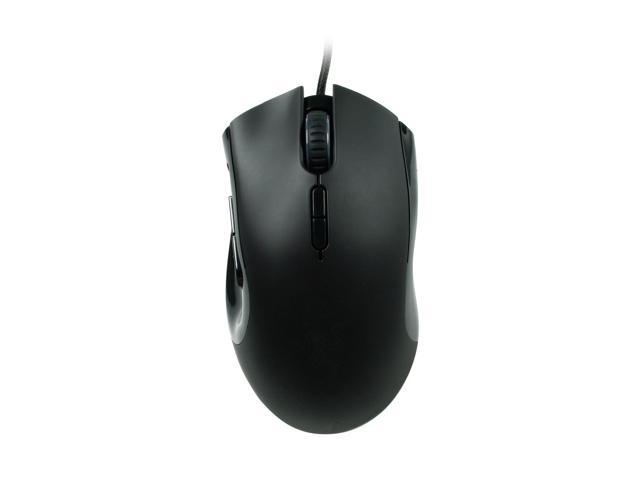 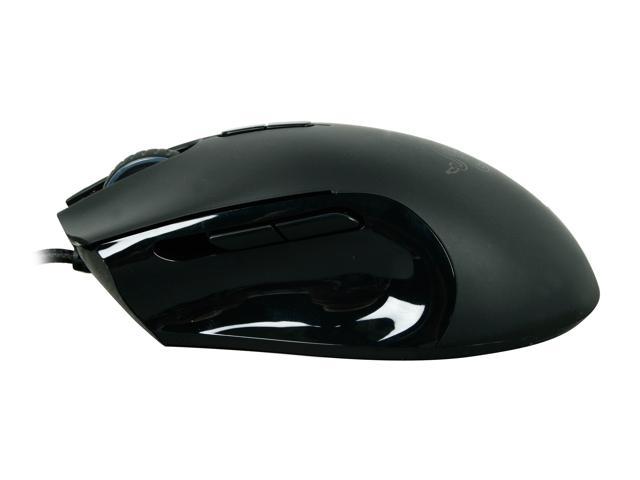 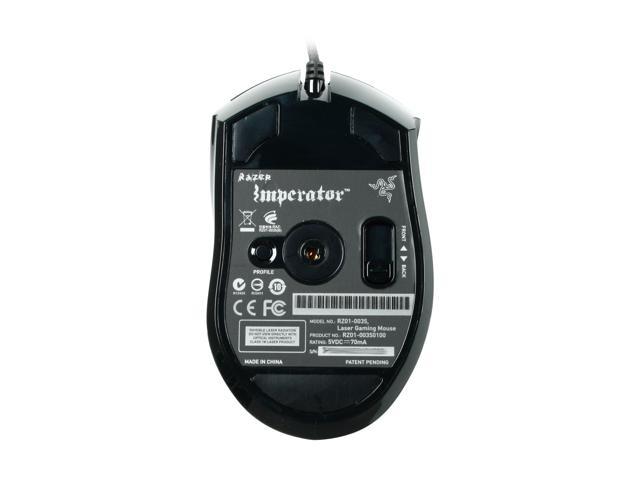 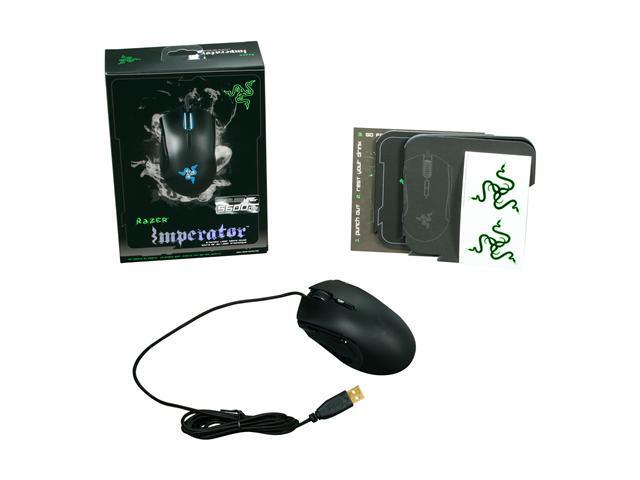 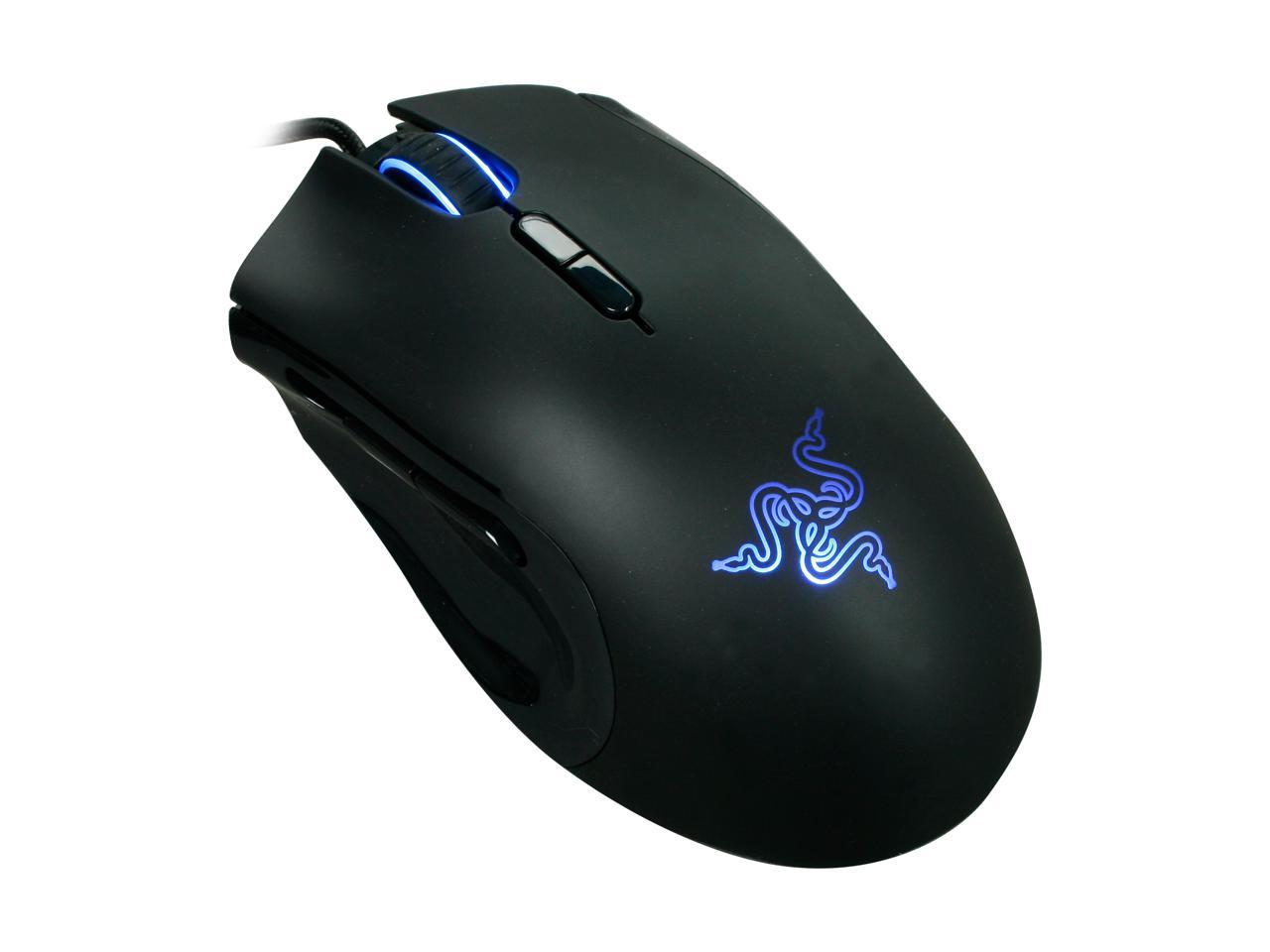 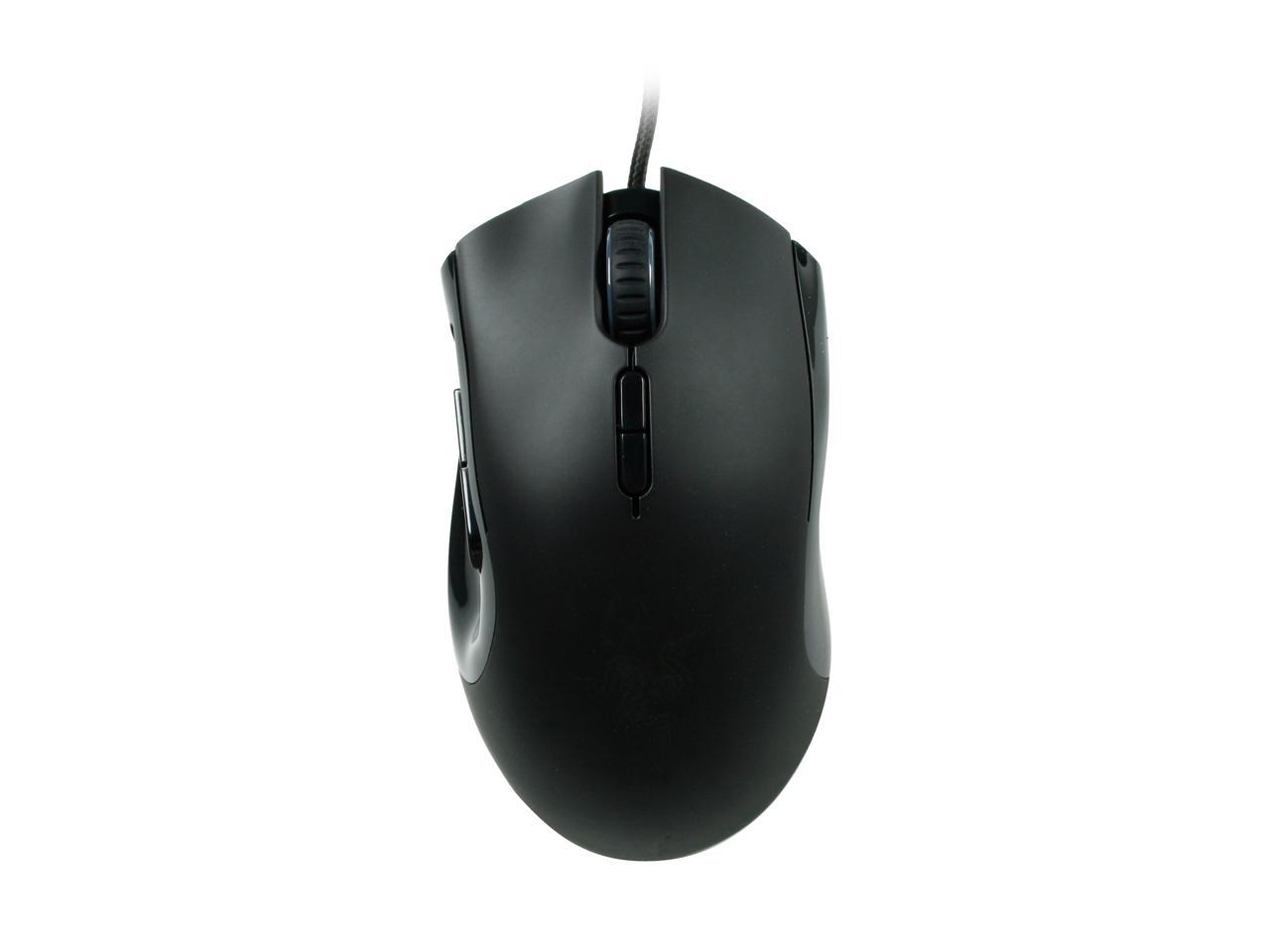 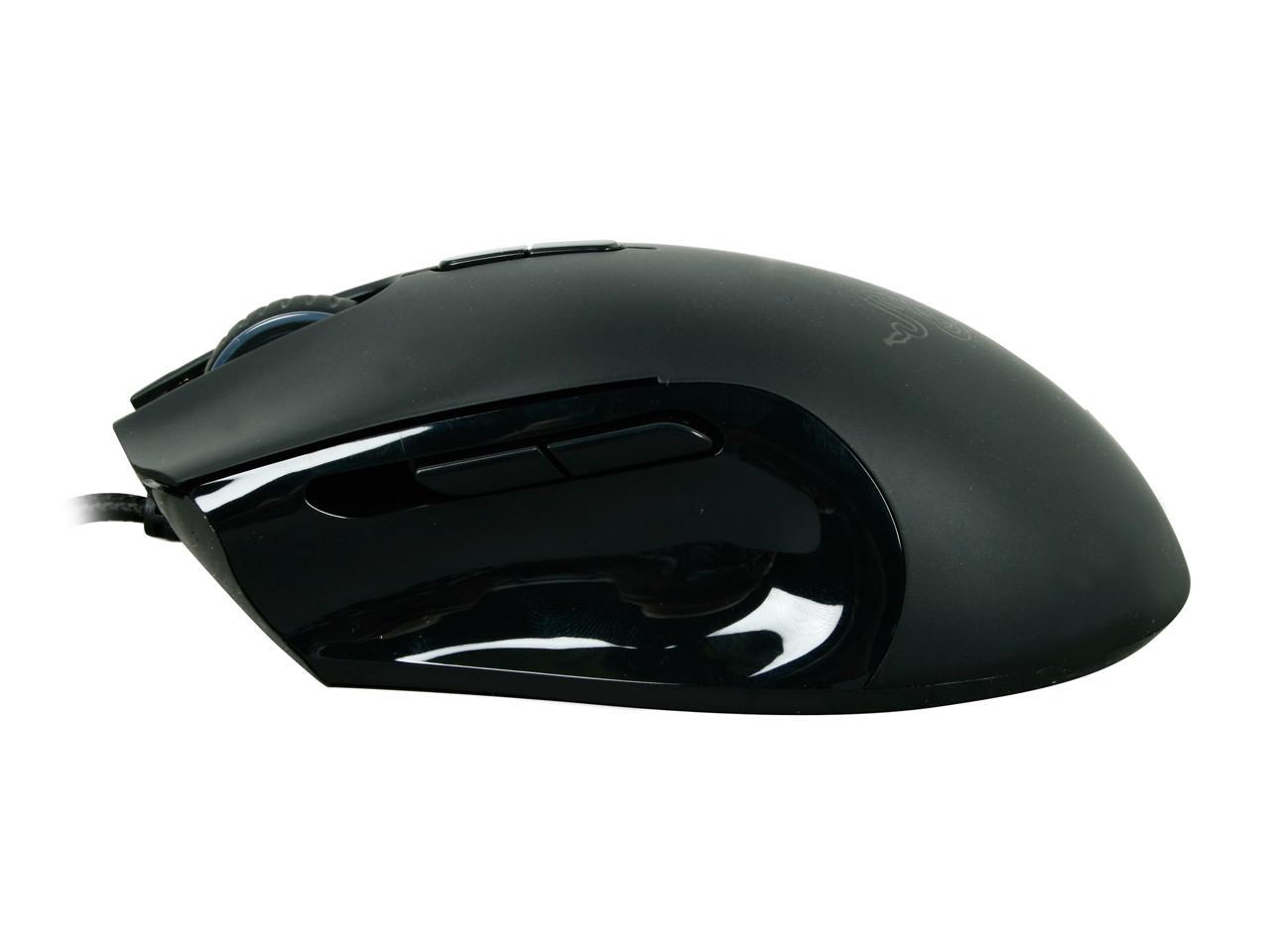 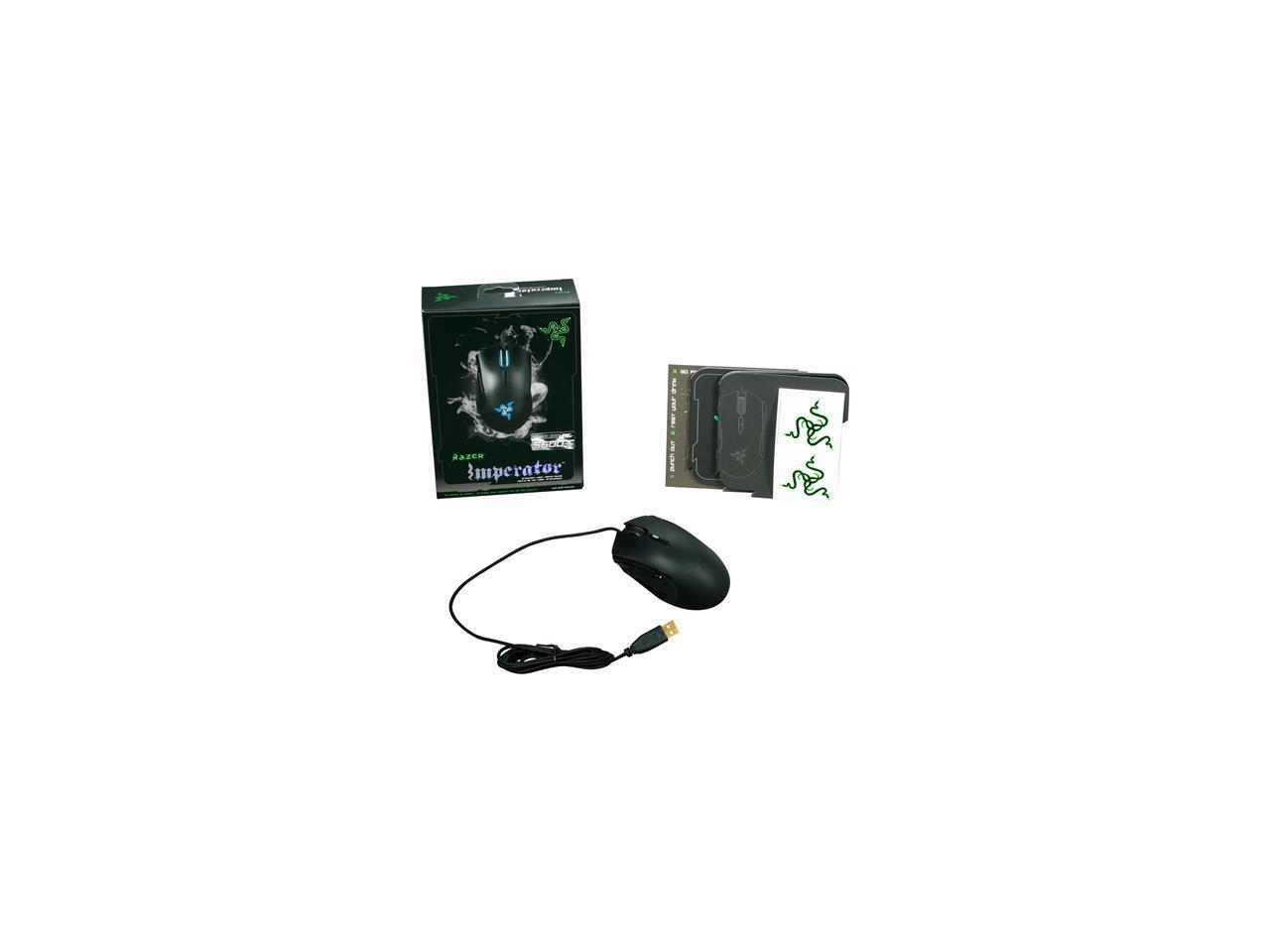 (118) Write a Review
OUT OF STOCK.
Overview
Specs
Reviews
When every aspect of your game matters, customize your game play with the unique adjustable side buttons, giving you optimum reach for easier access to mission critical keys and macros.

Learn more about the RAZER Imperator

Cons: - The glossy sides don't feel great, not too bad though - My pinkie is left hanging off the edge depending on how I position my hand

Overall Review: Worth the buy. I bought because I was tired of my old Dell wireless, I was surprised to actually see my scores go up.

Pros: This is BY FAR the best mouse I have ever owned. You can go to Youtube and see all the videos of the unboxing and reviews you want, but the one thing that Nobody has ever stated was the DPI settings. I've read people stating that they only have three settings for sensitivity, which is weird, because I must have gotten a defective mouse. For some odd reason, I have FIVE. One reviewer stated that his three settings are too slow, still too slow, and way too fast. My mouse must REALLY be defective. Once I downloaded the drivers, updated the firmware, and got it all adjusted to my liking, i was able to pick what five sensitivity settings i wanted, which range between 100 DPI (precise sniper rifle movements for that pristine headshot) to 5600 DPI (crazy fast bouncing and bunny-running). The adjustable buttons on the side are a very nice touch, especially for my fat hands and short fingers. Slid all the way back, my thumb just rests between the buttons. The blue glow on the wheel is KILLE

Cons: The only thing I find unnerving about the mouse is the logo on the back of it. You can turn it off in the settings, but if it's on, it "breathes"... pulsating slowly. Sure it's a wicked touch, beckoning you to place your hand on it and stomp some tail. I just wished there was a button in the configuration to turn it on permanently, so it would match my Lycosa (which is just as awesome).

Overall Review: All in all, this mouse is the bee's knees. The same grippy rubber surface as my Lycosa, adjustable buttons on the side, on-the-fly DPI settings, killer blue glow, and last but not least, the cord is braided. This is just one sexy mouse. Even the skates on the bottom are slicker than snot on a doorknob. Can you justify spending eighty bucks on a mouse? I did.

Pros: Works OK for a while.

Cons: As with so many other people, I had this mouse for a month or two without any problems. Then the tracking started to fail; sometimes it would skip to the other side of the screen, sometimes it would freeze up. Then it stopped working at all - just the left and right mouse buttons work but not the lights or the sensor. USELESS. I then had the added problem that I have family in both the USA and UK so I travel back and forth. Since I'm now in the UK they won't replace the mouse, even though they have a depot in the UK where I could return it to. I've previously bought Corsair products in the USA which have gone bad but they always let me replace them when in the UK - and they even refund my postage costs! Much better company than Razer. I bet the majority of people giving this mouse a 5 star rating will start experiencing problems before they know it. Then they too can experience Razer's awful customer service. Needless to say I won't be getting anything from Razer again.

Overall Review: I don't know what I was thinking spending so much money on a cheaply made piece of plastic junk. Logitech products are noticeably better and I've never had one fail on me like Razer products do. I've owned 14 different Razer products, and around 50% of them have ended up in a drawer because they're so terrible. This is the last time I make the mistake of buying something from Razer - they've coaxed too much money out of me with their flashy advertising and promises of greatness. When it boils down to it, they're just plain expensive for what they are.

Pros: Very comfortable. Great grip, you won't have to hang on as hard. My G5 feels like I need to grip it a little harder or it's going to get away. With this mouse you just hold it, this means your hand doesn't get very tired after hours of play.

Cons: I don't know if this particular mouse was defective or not. I've placed a replacement RMA and I'm waiting on the mouse to arrive now. I owned the mouse for about a week. No problems. Then it started to act like it got disconnected from the USB. The cursor would stop and no amount of fiddling with buttons on the mouse would make it move. I had to unplug and replug the USB for it to work again. Then a couple days later I noticed that the cursor was starting to move in the opposite direction of my movement. This only happened at slow speeds, but it was very annoying trying to get a sniper shot, only to have the cursor move in the exact opposite direction I wanted it to! This problem worsened a bit, but I didn't give it long to see how bad it would become. Eventually I couldn't do simple tasks such as closing a window or using a drop down menu. Every time I tried to slowly move in a certain direction, it would mess up.

Overall Review: I tried to reinstall the drivers and even the firmware on the mouse several times. I cleared all drivers from my computer, double checked to make sure they were gone. Then I started from scratch. I tried this at least three times, but the problem just wasn't going away. That's what makes me think it was a hardware problem. I love the grip on this mouse, I love the aesthetic, I love the rubber texture, I love the lights...But that's all meaningless if it doesn't do its job. I'm giving it a second chance, I hope the second mouse works or I'm done with Razer. I hope Razer isn't all show and no go, I want to like it. I'll be posting a follow up review, hopefully with 5 eggs. I've spent well over $3000 here at Newegg, and this is the first item I've ever had to return! Newegg pwns, keep up the good work guys.

Pros: Extremely comfortable, ergonomics helped by sliding side buttons. Looks good, feels good in hand. No reliability issues in 3+ years of inconsistent use as the mouse for my gaming laptop.

Cons: I too had an issue with the tracking on this mouse early on; as another reviewer pointed out, it turned out that the Imperator really hates Razer's old eXactmat. Swapped for a Steelseries Qck fiber mat, never had an issue from that point forward.

Overall Review: Probably too expensive at MSRP, but for what I paid for it here, has been worth the money. Better gaming mice have since hit the market, making even the updated version of the Imperator obsolete.

Pros: Very comfortable due to its ergonomic features. Light weight, but not too light. Pretty colors.

Overall Review: Used to use Logitech mice, but not I'll probably be using Razer mice.

Pros: Looks hella sweet, got the perfect amount of buttons for my games (shooters), and it has a very nice configuration tool that I can use to map the buttons, set the DPI, etc. Very fast as well. I you can't find the perfect sensitivity and responsiveness for you with this mouse, then what you need hasn't been invented yet.

Cons: The one big downside this mouse has is that I can't map every button that I want in some games. The middle two behind the scroll wheel are examples of this. Then again, this isn't the mouse's fault, it is the games. I can figure out a workaround.

Pros: -shape -size -style -adjustable side thumb buttons -smooth clicking of all buttons -on the fly dpi changing -the software that helps you set up your mouse is simple and works -i bought this as a referb and saved some cash

Cons: it might be a little to light for some, even for me. but its something i easily got used to.

Overall Review: the shape and feel of this mouse in my hand blows my mind... i use the finger tip grip, my fingers hold the mouse and move it around rather than my whole hand. im neither claw nor palm style so most gaming mice did not work well wth me. either too flat, or my fingers would slip off the sides. the shape of this mouse fits my hold perfectly. i will admit... i do like heavier mice... but im already used to it. the tracking is soo smooth, i suffer from motion sickness when i play FPS games. but with this mouse its significantly helped because its smooth and dosent chop its way around the screen.