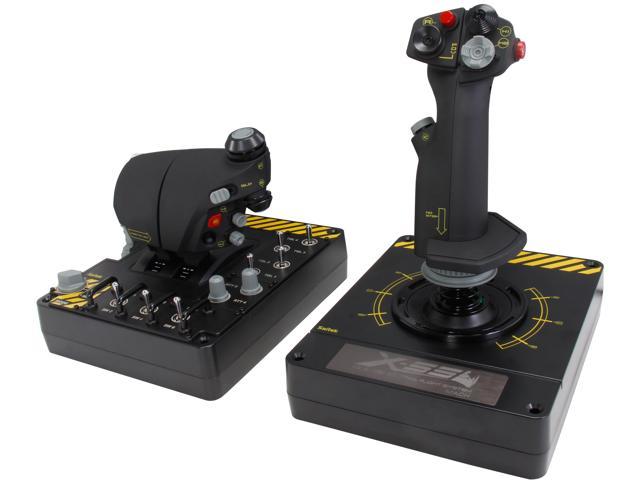 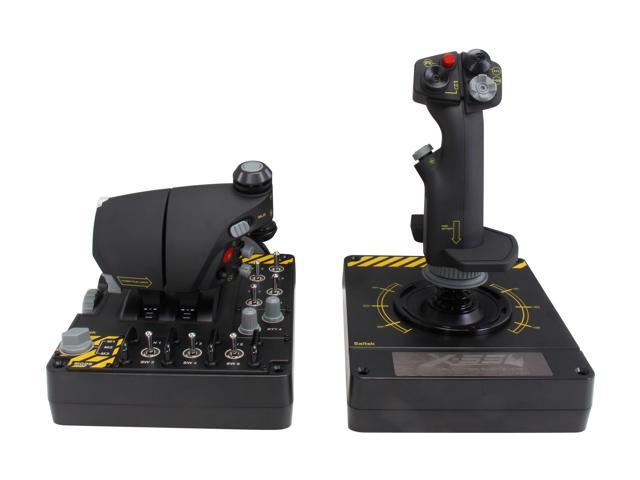 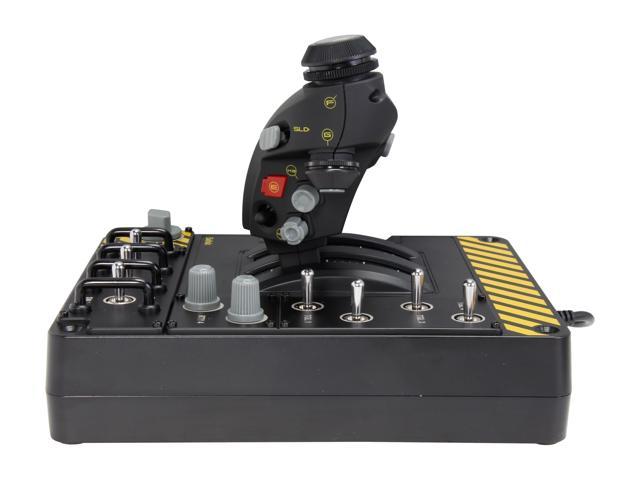 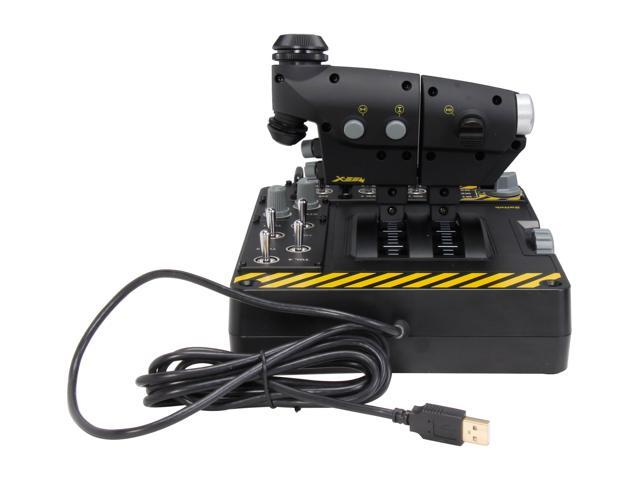 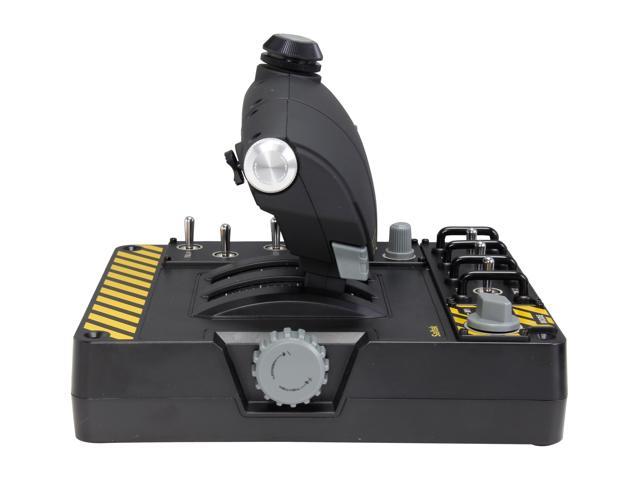 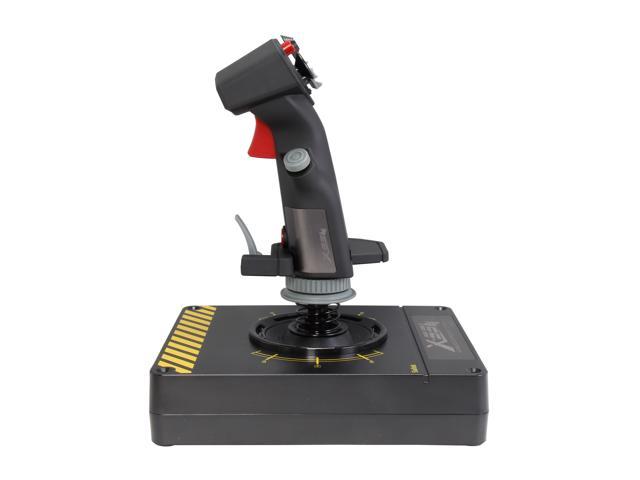 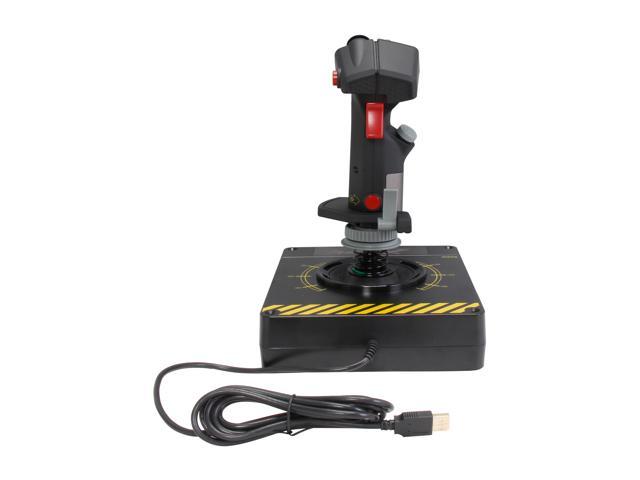 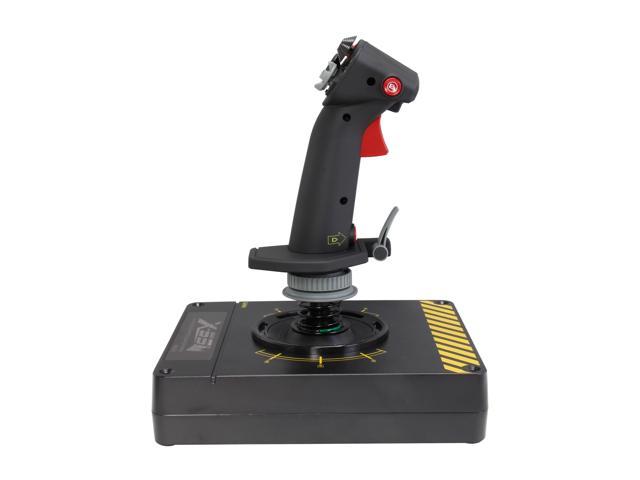 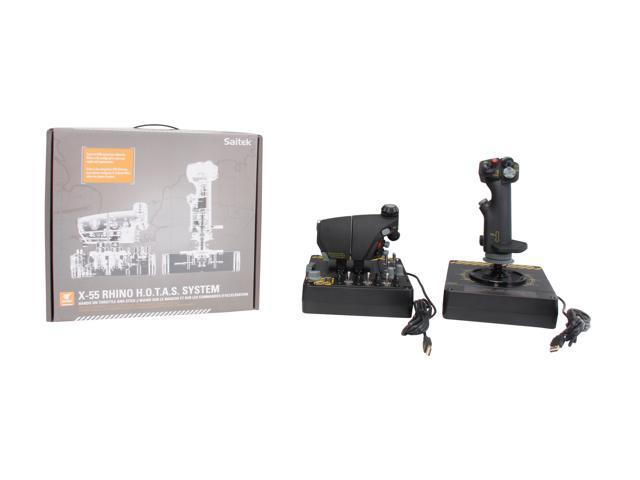 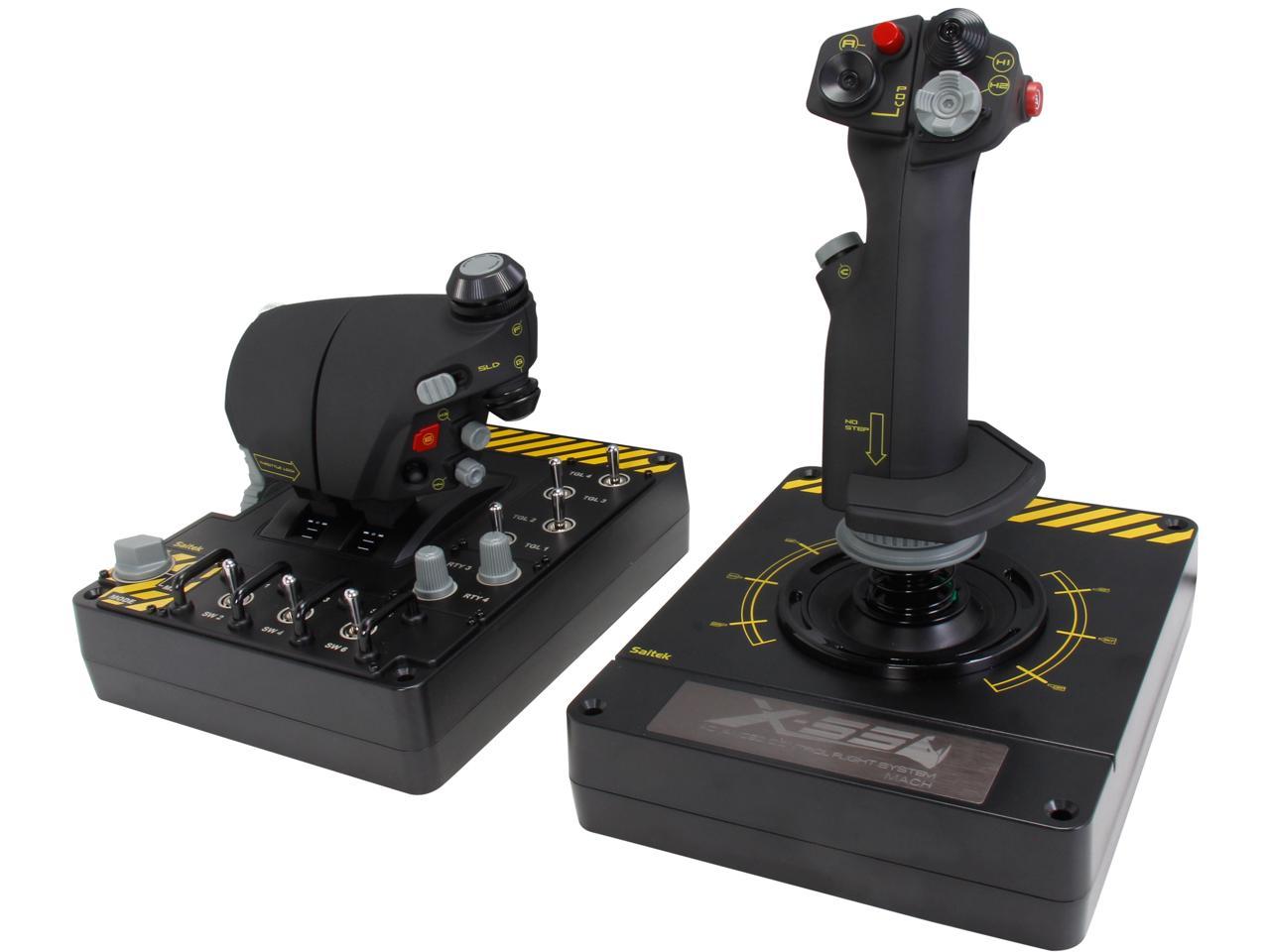 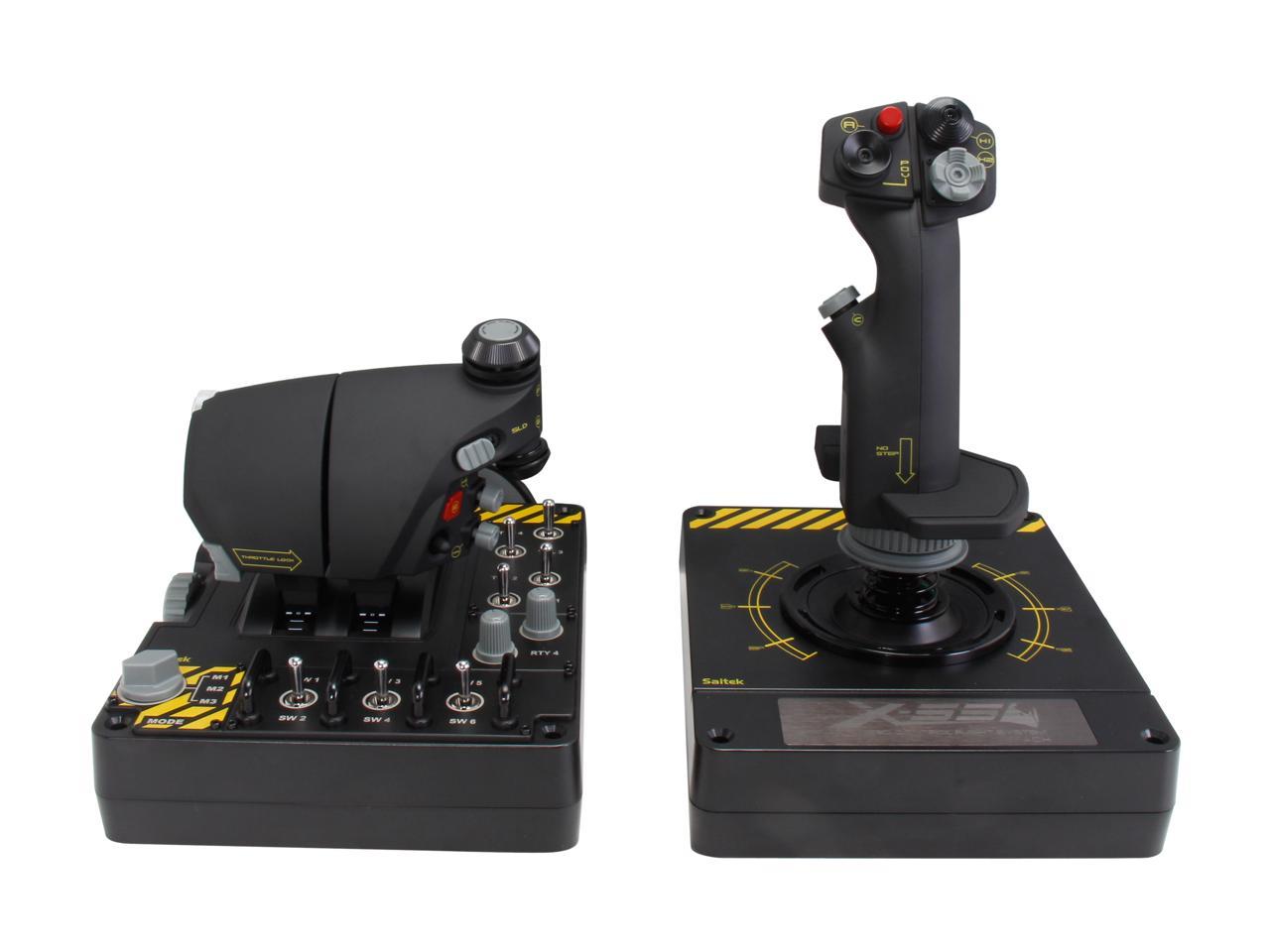 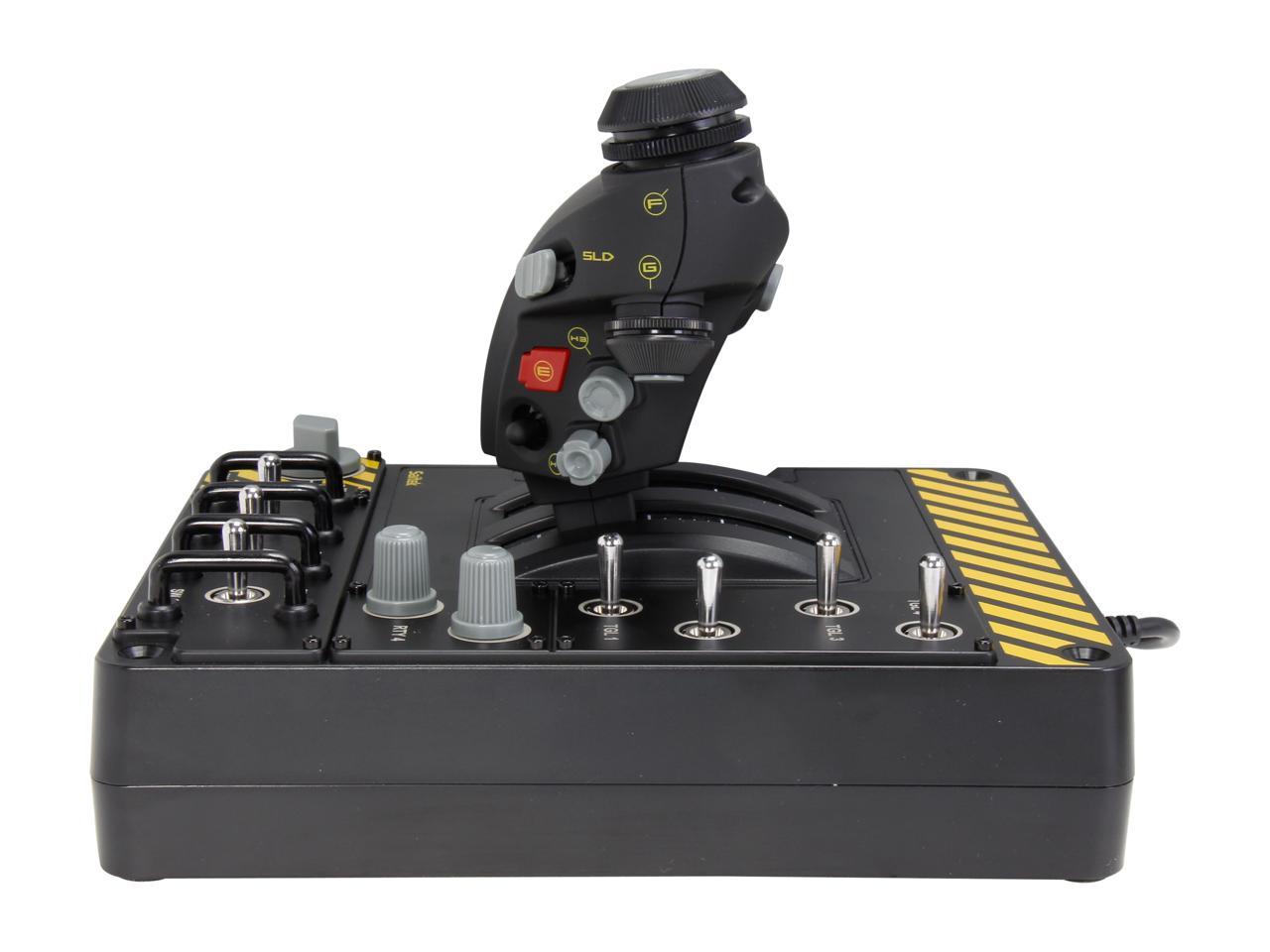 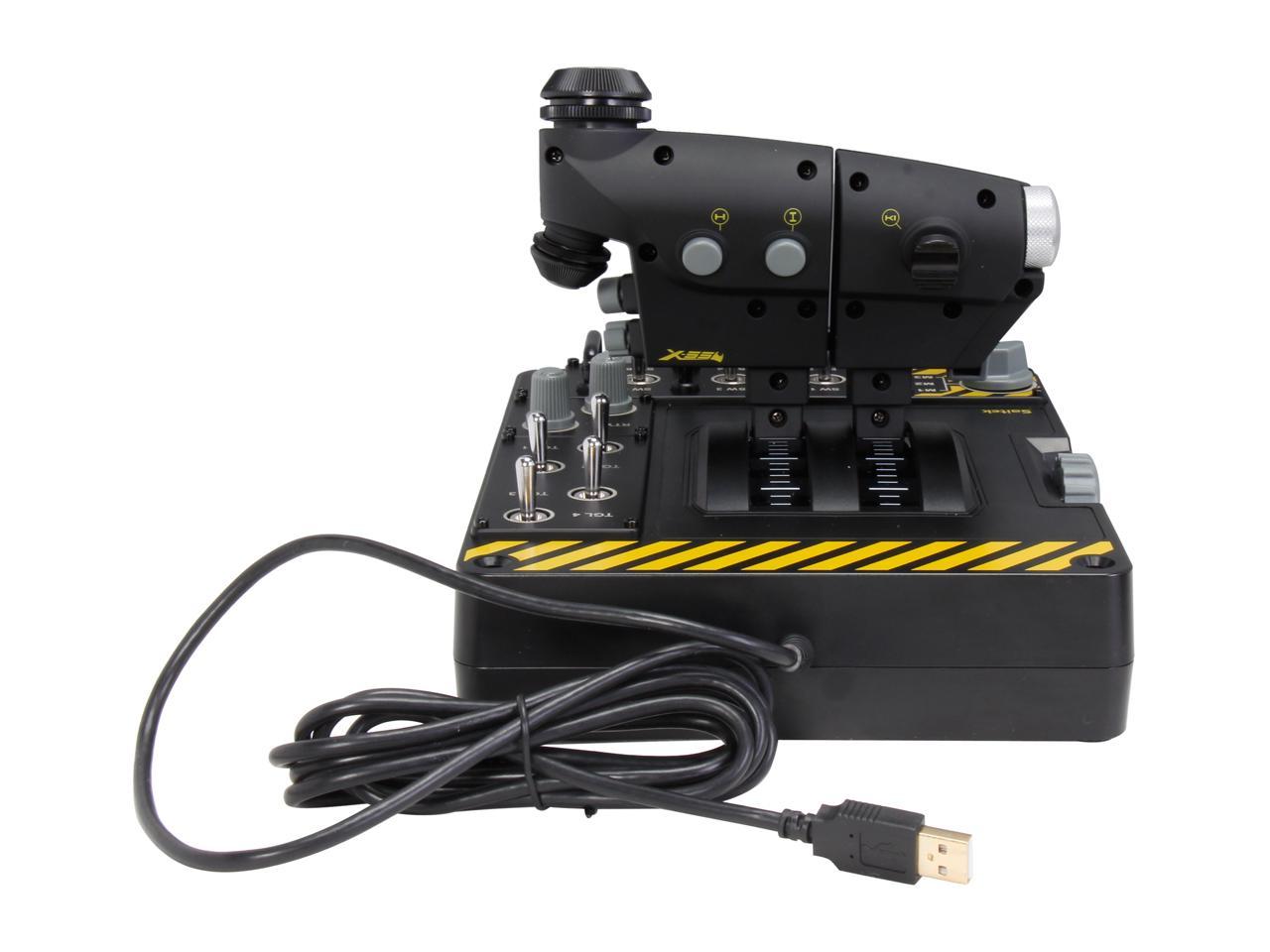 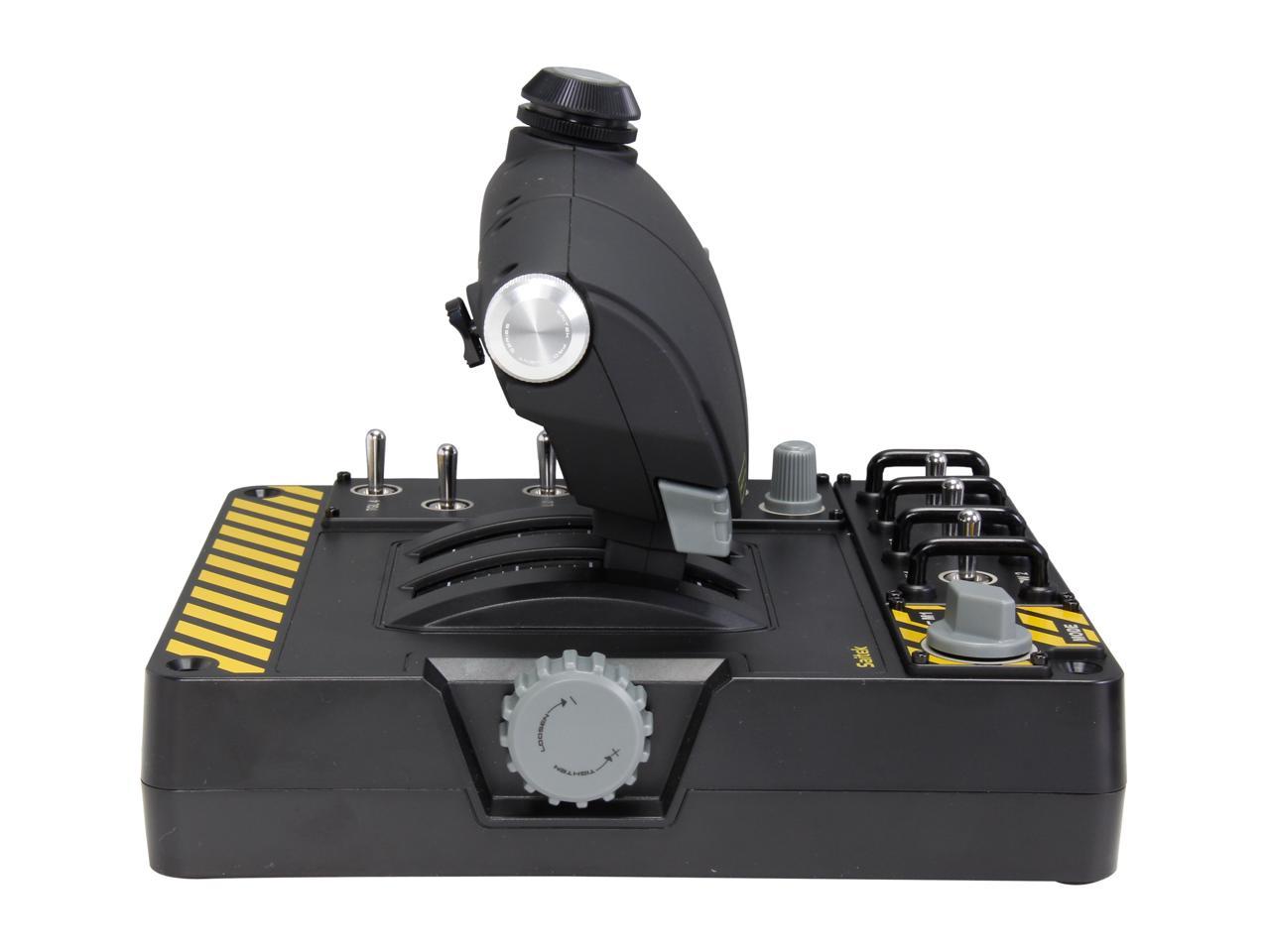 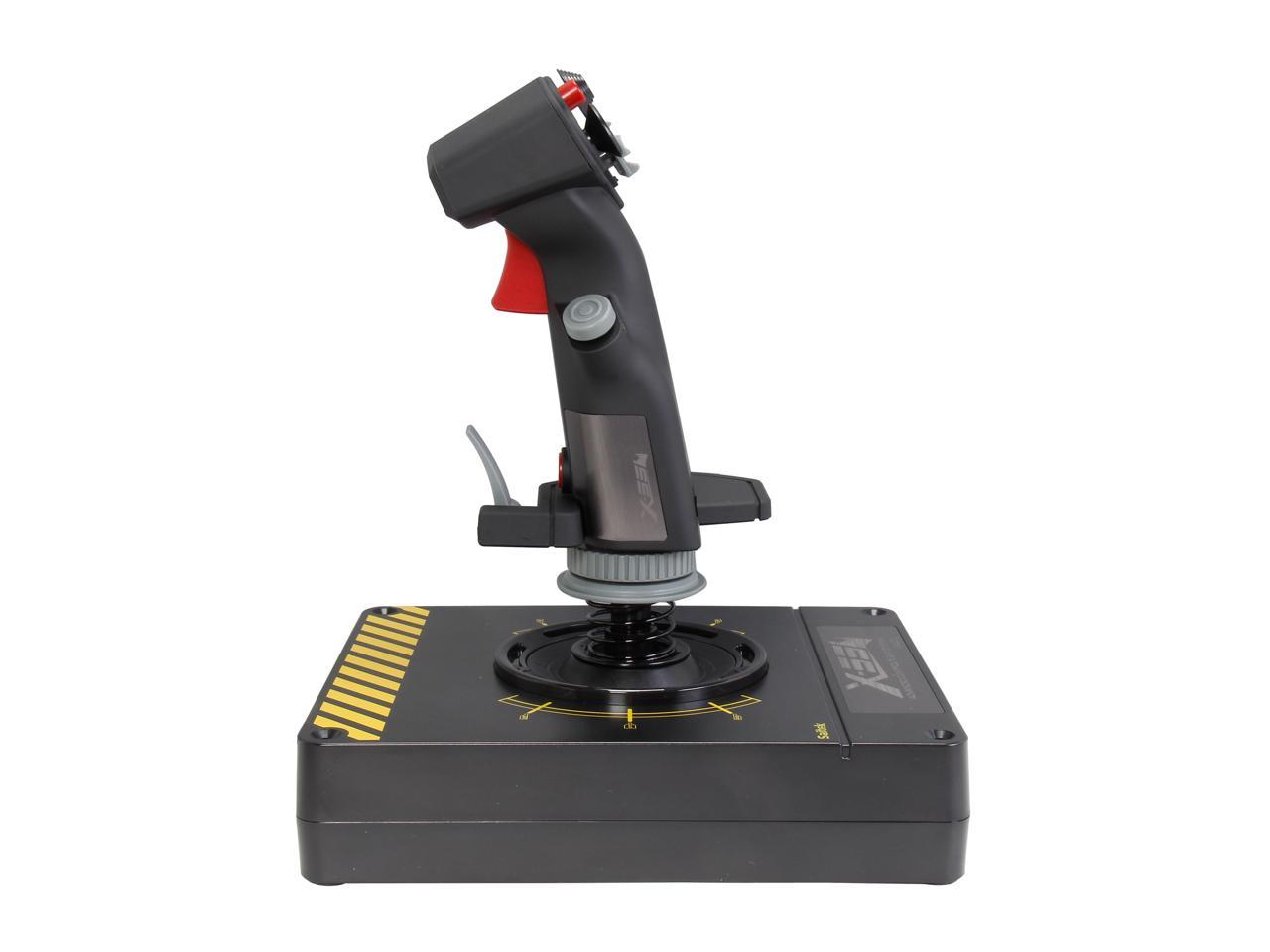 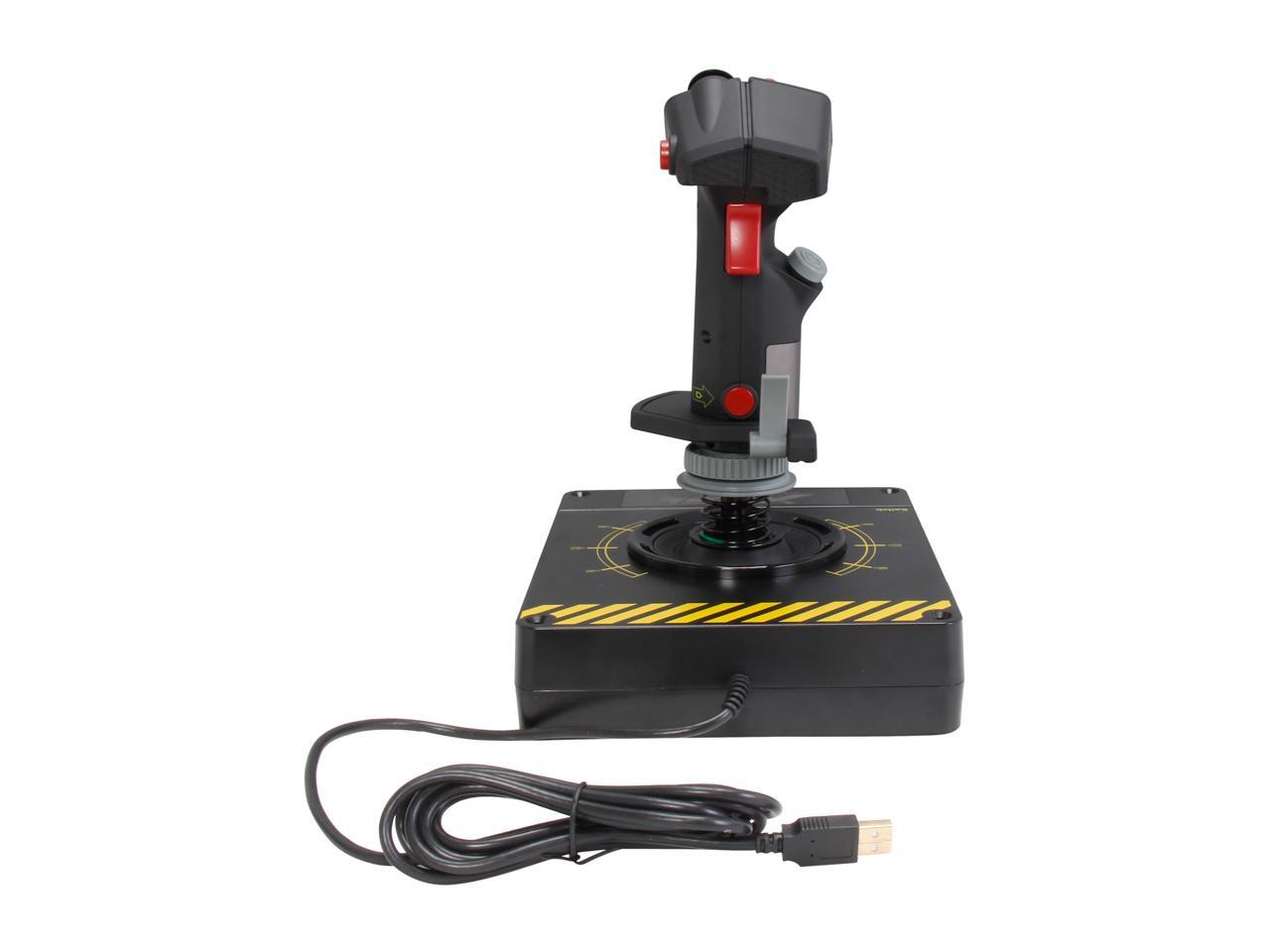 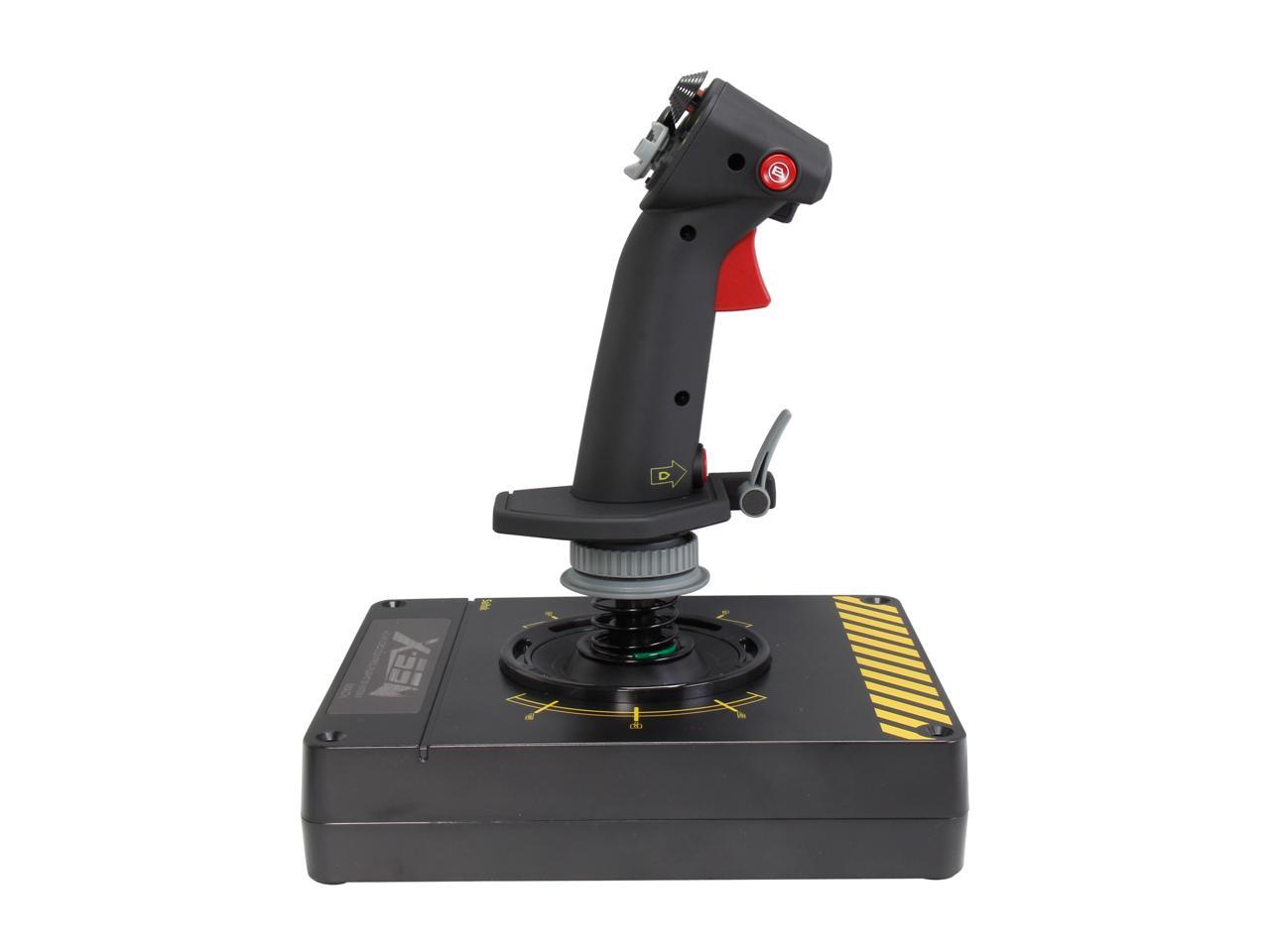 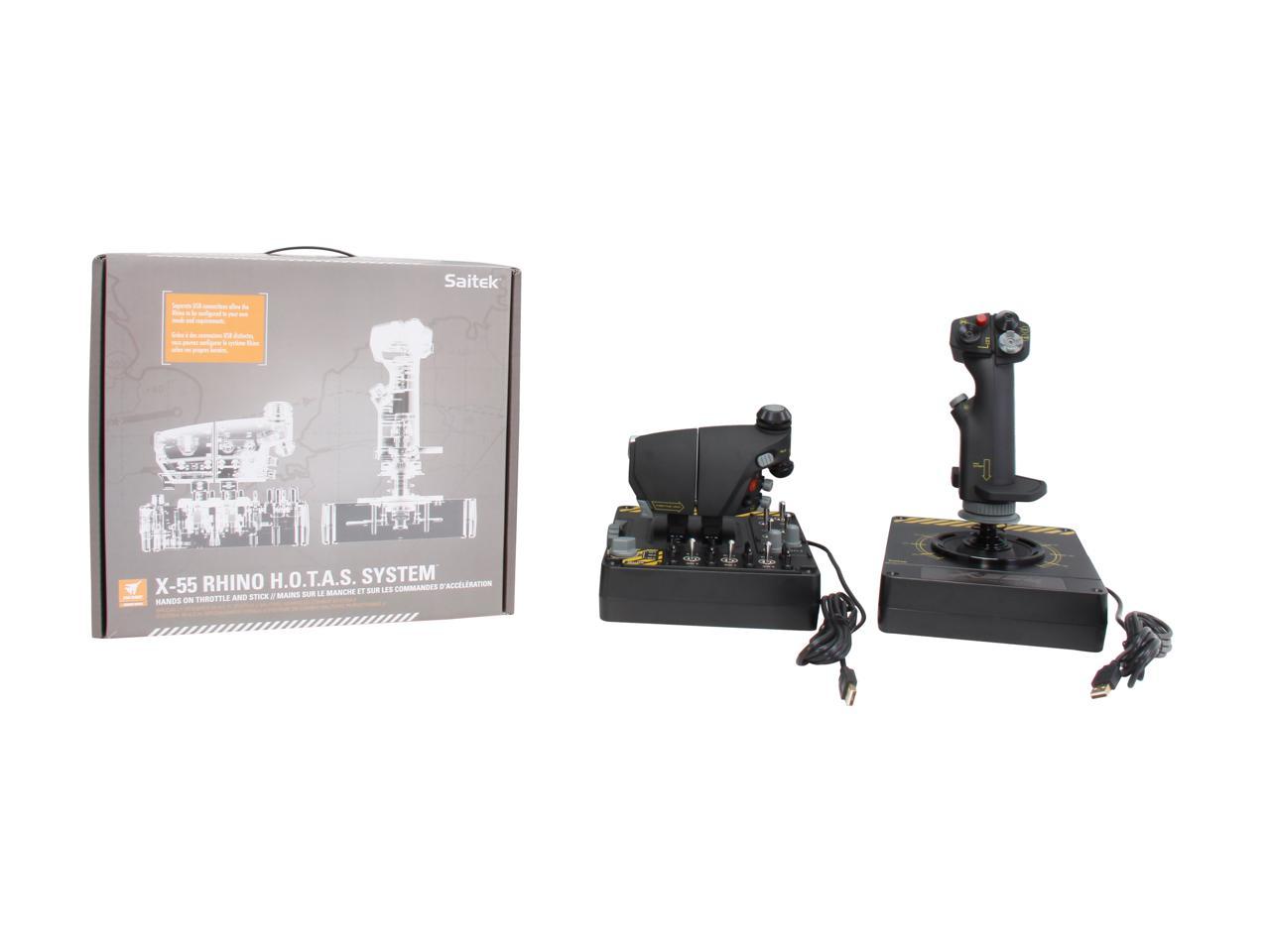 During virtual flight – just like true flight – the accuracy of an aircraft's control surfaces is of paramount importance. The X-55 Rhino's control surfaces are incredibly accurate, courtesy of an all-new 16-bit aileron and a 16-bit elevator axis, each employing hall-effect sensors. Developed from the ground up, Saitek's 16-bit axis solution enables extremely precise flight.

A ground-breaking, adjustable stick-spring system allows pilots to alter the force required to move the stick. Four springs of varying resistance are included to provide a total of five different options. Choose the spring – or no spring at all – which best accommodates your style of flying. Using a twin-engine throttle controller is the only suitable method for manipulating a virtual twin-engine aircraft. The X-55 Rhino boasts twin throttles – ideal for situations in which your primary engine is disabled and you're down to one – and also provides the option to adjust the friction required to move them. And if your aircraft of choice is single-engine, a handy throttle lock effectively converts the twin throttles into a single unit. Bonus Toggles and Rotaries on Backlit Throttle Base

Flight sim accessories used by today's virtual pilots require the highest level of control and customization. The X-55 Rhino showcases additional toggles and rotaries, not based on any particular aircraft, around the throttle base. Seven extra three-way toggle switches and two rotaries allow you to customize this H.O.T.A.S. System to your own specifications.

The X-55 Rhino's stick and throttle units each utilize their own separate USB connection, offering greater flexibility during customization. You're free to situate the controls exactly where you want them, without the need to keep them tethered to each other. Saitek's new software provides the ability to completely customize all of the X-55 Rhino's axes and buttons. On the axis side, you can adjust deadbands and response curves to fine-tune axes to respond just like an aircraft's real-life counterparts. On the buttons and toggle side, you can assign any number of in-sim directives, such as speed brake, flares, target lock and pickle weapon. The software also allows programmability for an array of mouse and keyboard commands – from basic single-key inputs to very advanced, timed, and macro commands.

Transform even a modest PC into a virtual cockpit and experience the staggering realism of different flight and emergency situations – complete with realistic weather and flight conditions. Using the X-55 Rhino as a foundation for Saitek's modular accessories, easily add Combat Rudder Pedals and a multitude of Switch, Navigation, and Instrument Panels to fully customize your flight simulator. Commercial or private, seasoned or novice, you have the ability to equip your flight simulation setup with all the essentials needed to vastly improve your skill set and muscle memory.

Compatible with ALL Major Flying Games with the Saitek X-55 H.O.T.A.S. Configuration Software, Including:

Learn more about the Saitek X-55

Pros: Works like a charm, if you realize what you are dealing with. Two simple fixes and all my problems are gone. Now all switches, hats, lights, ghosting button problems, so on even dead band problems are gone. Would give it a 5 out of 5 but tech support could not help me had to figure the problem out myself. Since the fix I find it one of he best HOTAS I have used to date, minus the older X65-F. Buttons are not that hard to program if you used a HOTAS before. if not I recommend videos on you tube. Works well in Elite, Star citizen, even some older games. It's just awesome. I have to say to the other people that are having this problem attempt this. I hope it helps you enjoy your X-55 and have as much fun as I'm having.

Cons: They don't tell you that you need a powered hub or how to get it to work in a USB 3.0 port. Look below.

Overall Review: Here is the problem. USB 2.0 does not provided enough power to run the X-55. The hardware goes into a brown out state due to under voltage on problems. How to solve the problem. move it to a USB 3.0 port. Or get a power USB 2.0. hub... maybe. I know for a fact at this time and 10 hours of testing. Step one: Disable legacy support for USB 3.0 in the Bios. Step two: Make sure that it is plugged into the USB 3.0 port. both sticks this is important. After this I'm totally in love with the X-55. no longer ghosting, no dead bands no problems at all. IT JUST ROCKS!!!!

Pros: Looks and feels quite solid. Quite easy to change the tension via springs on the stick, 4 included, metal accent panels on stick and base help with no-look hand orientation while using HMD (Oculus Rift).. All buttons/hats easy to get at on stick side of things. Tri mode switch on throttle can be programmed to change everything in an instant on both stick and throttle. Perfect for multirole craft on patrol without need for mfd panels. Enough friction on throttle even at lowest point on tensioner dial to keep it from drifting. Low mounted cat's tongue stick on throttle is mappable to mouse or other axes. High/low clickable rotaries on the handle itself are perfect for ordinance/cm selection and deployment. More buttons than I know what to do with at the moment. Not seeing any deadzones on any axes, everything calibrated automatically. LED illumination adjustuable from off to neon bright, but mode switch indicator stays constant. Both throttle and stick have countersunk holes through the bases for attaching to a table or other flat surface.

Cons: Very noticeable junction between front and back pieces of both sections of throttle assembly. This should have been done by molding the bottom part of the throttle handles in 2 pieces and then placed a single panel over the top where the hand contacts. This is going to cause scrapes, and and also serves as an entryway for palm-sweat. I really wish it was smooth across the top. Access to toggle switches can be hampered by the throttle. Stick could benefit from more illumination aside from rings around pov/hat/castle to balance against throttle. Percentage indicators on throttle base should be illuminated as well. Overall these are minor concerns that are not deal-breakers. Saitek seems to be a bit slow in providing profiles/support, but this is still a young product.

Overall Review: On first impression this is a very nice price/performance competitor for the Thrustmaster Warthog at less than half the cost. This is not a minor feat. I've used both and while the Warthog has weight going for it, with proper care and maintenance the x-55 seems like it is worth every penny.

Pros: lots of buttons. a definite improvement over the x52. More than enough buttons for elite dangerous. better control layout than the x52. looks super cool on you desk.

Cons: none. some people on you tube rant over the layout of the buttons or the feel of grip, or how it doesn't come off center. What ever guys. I don't have any issues the this stick.

Overall Review: I have a tendency to look at about a million reviews before buying something and the negatives where very negative on this stick. I don't understand the fuss, This stick is pretty awesome. If you are comparing it to something that is 500 bucks, then get out of here, that is not a valid comparison.

Pros: great stick, loved the feel and placement of the axis, buttons and switches

Cons: First day noticed couple buttons weren't functioning, ok no problem lots of other buttons, then a day later the trigger stopped working hardly even used and it had already broke

Overall Review: Loved the stick sad i had to return it, if the parts wasnt so cheap on them and had more durability i would highly recomend this stick seeing it didnt dont waste your time and money

Pros: Plenty of buttons for multiple configurations. Being able to change the spring on the joystick or remove it completely is a nice touch.

Cons: The software is practically worthless. I've had to install the drivers multiple times to get them to work. The H.U.D. software has fully worked yet. I can program buttons just fine but I can't on calibrate either the stick or the throttle. Right now I can't calibrate the stick at all. It acts like its not even plugged in on the settings window but I can program buttons all day long. I've installed and uninstalled the software multiple times.

Overall Review: I have the x-55 and a $30 Pacific AV8R and I can't tell the difference in the build quality of the two. I picked up the AV8R to use as a left hand joystick to control thrusters in space sims with 6DOF. Either its pretty good quality for a $30 stick or x-55 is just a rip off. I would say its not really worth more than $100. Madcatz is just taking advantage of the fact that there is not another dual throttle h.o.t.a.s. except the really expensive Thrustmaster Warthog.

Cons: - Very short life before breakdown. (3 months) - Required deadzone adjustment in games within one month due to heavy jitter on twist axis while hands was off-stick. Calibration within latest software did not solve issue. - Broken tension spring on twist axis (metal fatigue snap) within 3 months of purchase. - Price of product for extremely short life was not worth it.

Overall Review: Thought I was going to be among the lucky ones that had purchased this stick and didn't have an outright failure early on in it's use. However at 3 months after purchase, tension spring for rudder/twist axis snapped and now I have a what is essentially a near $200 paperweight. For that price tag, I was hoping for something built a little tougher than what I received. This is with normal use, mind you. Not mashing against the stops or any kind of brutish force/foolish behavior. I hope Saitek comes through BIG on this. They've got an opportunity to do the right thing and blow me away with customer service. Let's make it happen.

Cons: This hardware is incompatible with over 90% of software that can use a joystick and throttle as they are seen as two separate devices and when the throttle is connected it uses the same axis as the joystick making the joystick unusable. The manufacturer's software does not address this issue in any way and you are forced to use a third party software to rectify the situation, if you can get that to work. For HOTAS that costs $200 that should not be the case.

Cons: Joystick itself: Feels incredibly plastic like. Buttons are very spaced out, having big hands myself I found it hard to use effectively. The actual spring and stick movement felt very "sticky" and not very smooth at all. Some buttons were loose and were making vibration noise's just from stick movement. Poor joystick overall quality.

Overall Review: Ended up returning it because of defective joystick/buttons. My $30 Logitech joystick feels much better. I would buy just the throttle separate from the 2 piece joystick design if I could. Spent $200 for a nice HOTAS Joystick for StarCitizen and felt disappointed.