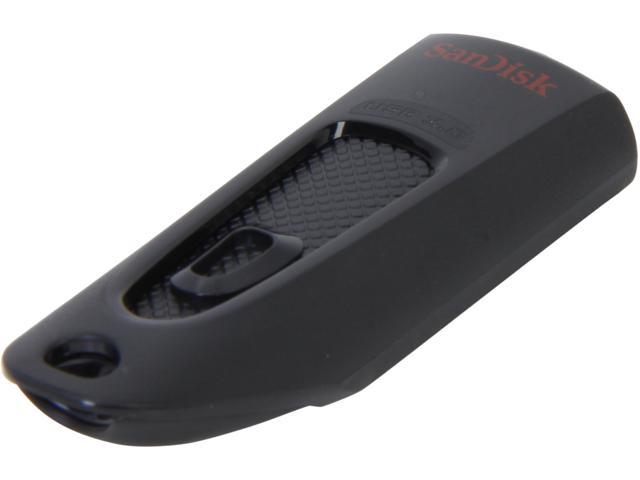 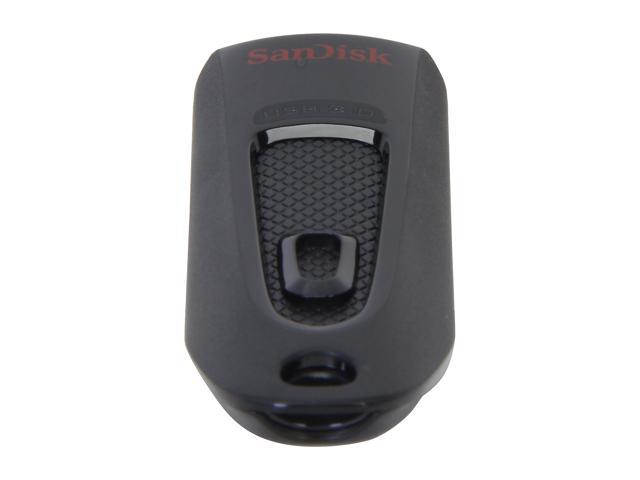 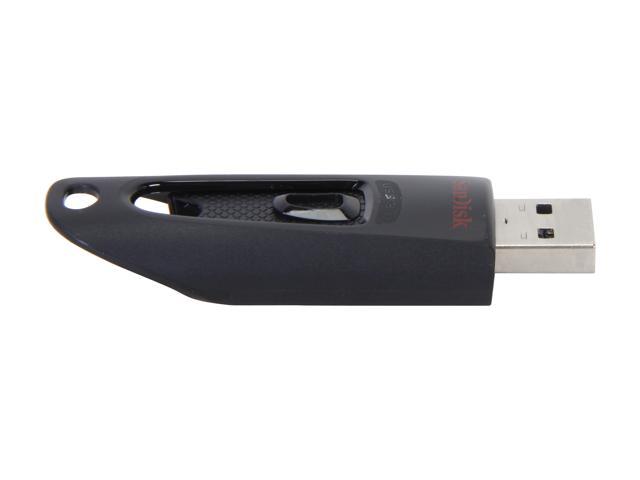 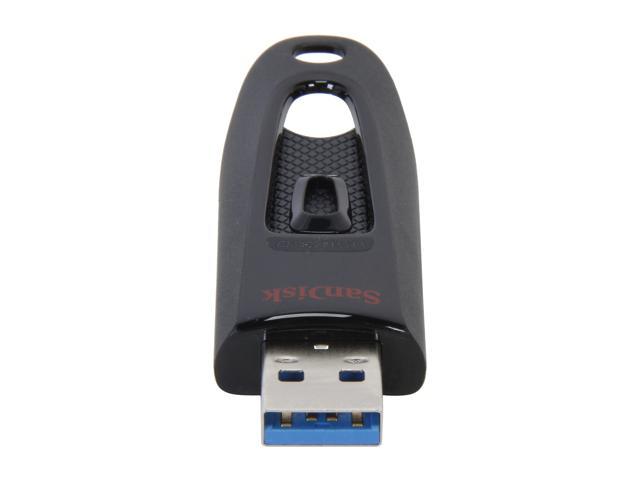 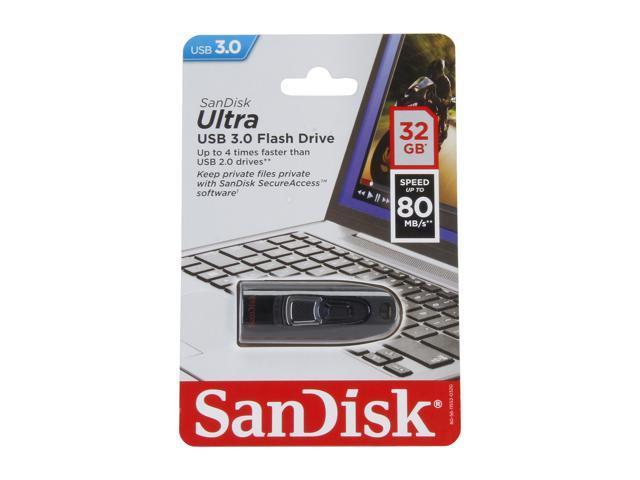 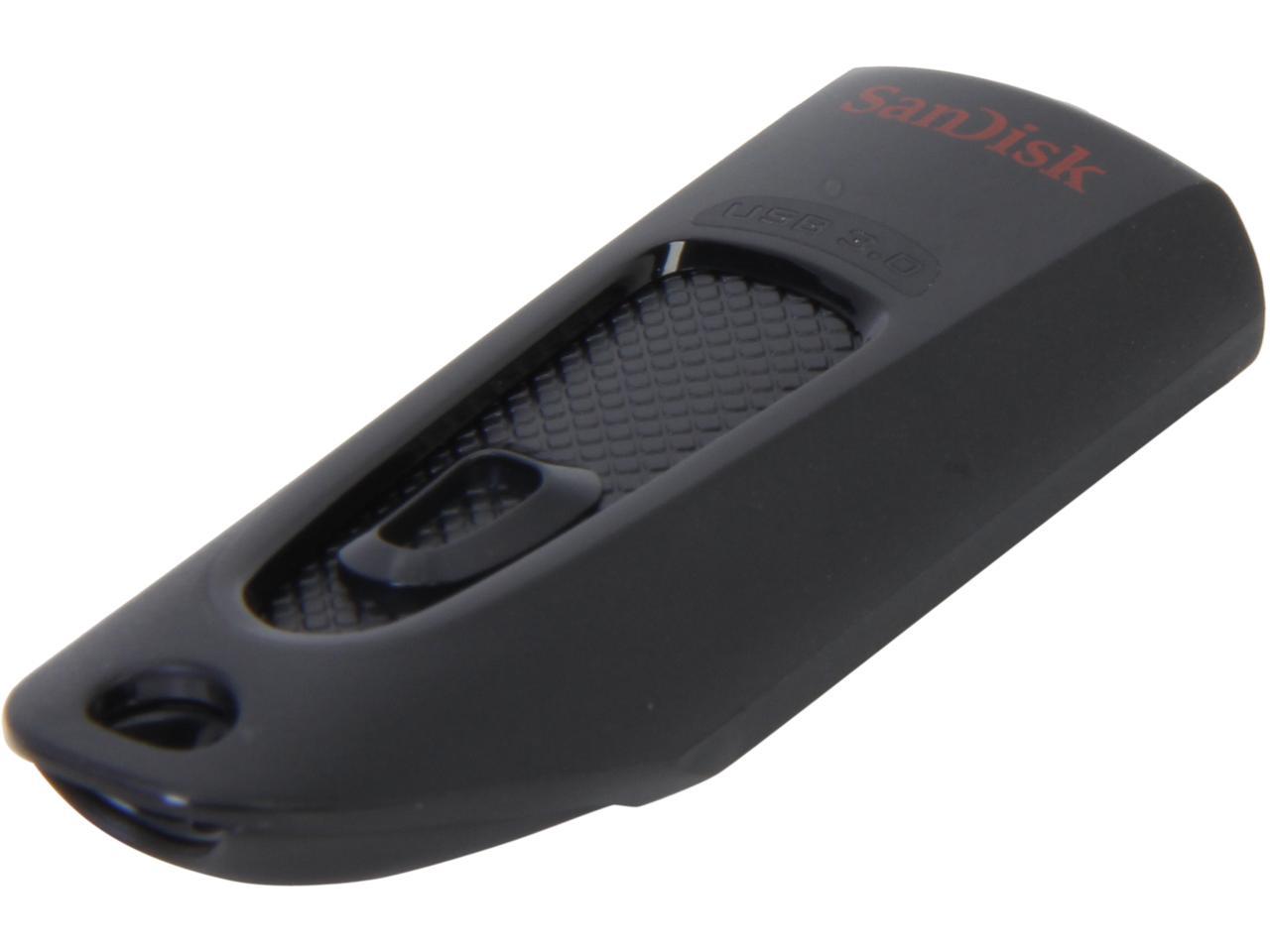 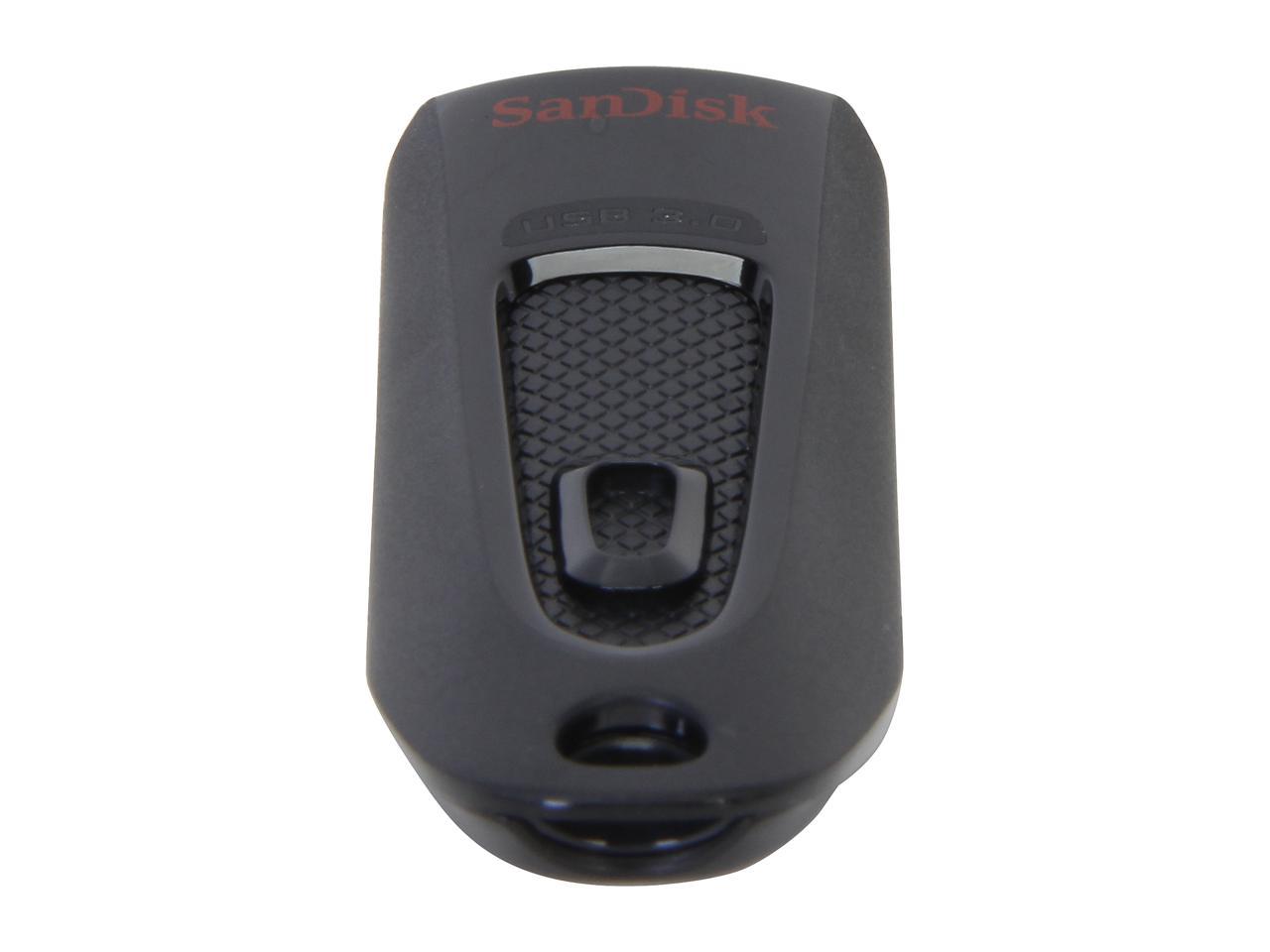 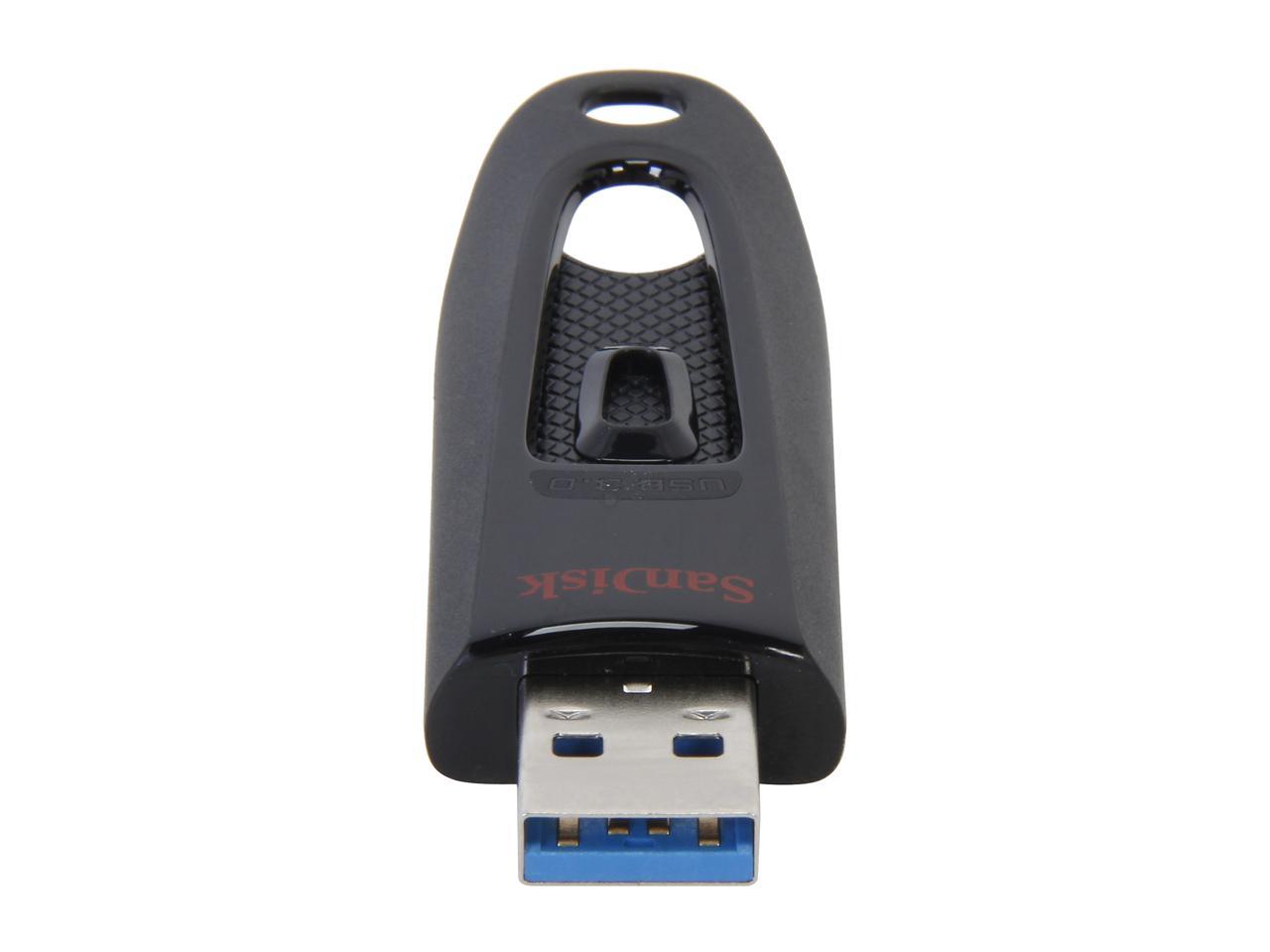 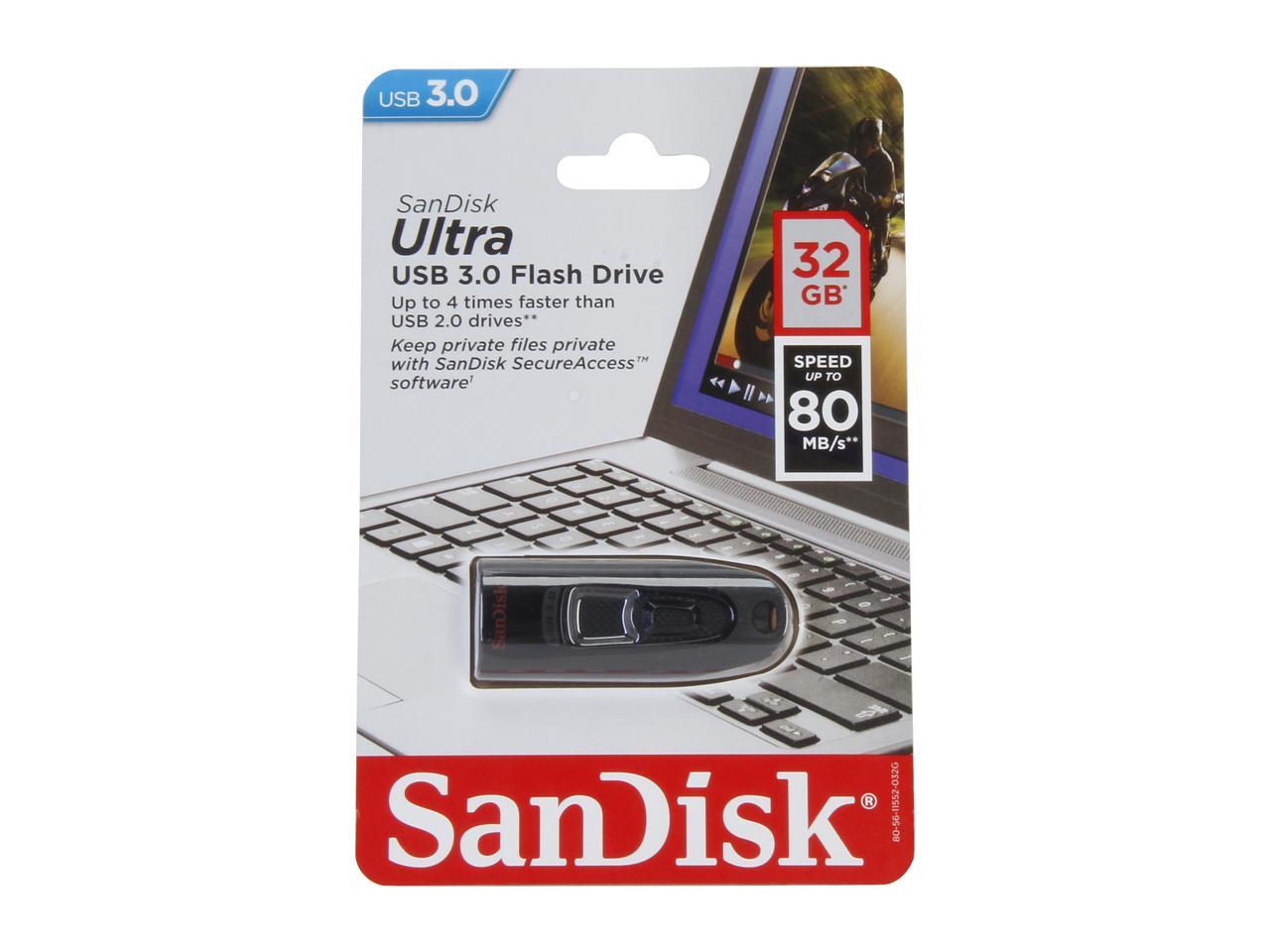 Overall Review: i noticed that these reviews are almost a year old I just bought one same exact model number but package states up to 100mbs rather than 80 mbs and I got write speeds of 45mbs and read speed of 95 mbs on usb3 and got write speed of 24 mbs on usb2

Overall Review: First, the 32gb "Ultra" drive performs largely as SanDisk describes. They make no mention or promise or write speeds, only reads. I hope to provide clarity on what they don't say, and demonstrate how it works on older legacy USB2.0 ports. Primarily I wanted this to transfer large burned DVD MKV files (typically 4-7 GB sizes on average). For that purpose, I can't recommend it. The following was a read/write test of a 3.25 GB MKV file on a fairly modern machine with an super fast SSD on the other end; freshly formatted flash drives using exFAT: Measured speed on USB 3.0 port: Read 63.5 MB/s; Write 9.69 MB/s Measured speed same PC, older USB 2.0 port: Read 31.1 MB/s, Write 8.25 MB/s For reference, a much older PC with USB2 only ports measured an even less 6.35 MB/s write, 19.2 MB/s read with the SanDisk Ultra 32GB. By comparison, a fairly high performing (for it's time) 8GB USB2 competitor from a few years back (brand named after "a person who virogously defends their country", the model is "angry"), copying the same files does the task (on a USB2 port) 26.6 MB/s read, 15.2 MB/s write. All machines running WIndows 7 64 bit, all the latest driver and OS updates installed. If your purpose is to write files on it >>in no big hurry<< through the course of a day, and pull them off rapidly all at once on another (USB3) machine, then this is probably a good choice for you. There's nothing wrong with it in that regard. It works as advertised, just won't knock your socks off. But if you're like me and need to copy large files en masse to move elsewhere, well ... the write time is excruciating and has me looking longingly at my old USB2 flash drive. This isn't the best choice for that.. The "Extreme" series of this Sandisk brand promises faster write (and read) speeds, and is well reviewed. I'll return this and fork out the extra cash for one of those, or perhaps an SSD, instead. It's a great brand and highly recommend their media for camera gear, but with this I expected better.

Cons: Not the performance expected from Sandisk.

Overall Review: Write speed is pitiful! Using the ATTO benchmarking software, the best the SanDisk could muster was 10.9 MB/s for an 8192KB test file. Read speed topped out at 79.5MB/s for a 1024KB file. Using the exact same testing platform, software, and port, my two-year-old Corsair Voyager produced its best write benchmark of 14.2MB/s with an 8192KB test file, and its best read speed of 71.0MB/s with a 4096KB file. I expected better from the brand new SanDisk device. The 30% write speed advantage of the Corsair may not seem like much, but it is VERY noticeable when writing large files (like movies). I thought that maybe I had received a dud or an old rev flash drive. So, I submitted a Support Ticket at the SanDisk Technical Support web page to voice my concerns. The response from Marc J., SanDisk Technical Support: "We currently do not advertise the write speed of the SanDisk Ultra USB 3.0 flash drive product. Our advertised read speed is up to 80MB/s which is 4 times faster than our Cruzer USB 2.0 drives. There are several factors that can affect the performance of your drive and are specific to the host device or in this case the desktop PC that you are using. As per the ATTO Benchmarking result sent, it seems to be within the specifications for the USB 3.0 Flash Drive." Well it’s no wonder they don’t advertise the write speed! I found Mr. J’s last sentence somewhat insulting. The test platform was the exact same for both the Corsair and SanDisk drives. Granted, the Corsair was an 8GB device, and would require two fewer address bits, but that would only be a factor when filling the devices to capacity. A 30% performance penalty is just too much. Perhaps instead of being disappointed in SanDisk, I should be more enthused about Corsair!

3 out of 4 people found this review helpful. Did you?
Manufacturer Response:
Hi Dougarew, My name is Allen from SanDisk support. I appreciate your feedback. We manufacture flash drives with different specification. However, if the write speed is of your primary concern, I would recommend you to please use our Extreme USB 3.0 flash drive that has transfer speed up to 100MB/S for the 32GB capacity and up to 170MB/S for 64GB. For further assistance, please contact SanDisk support at 1-866-SANDISK or submit a support request at www.sandisk.com/support. Assuring you of the best services. Thank you, Allen, SanDisk Support.
stanley j.
Ownership: 1 day to 1 week
Verified Owner
Would not purchase this again12/22/2013 2:13:50 PM

Overall Review: Bought this on sale at a local B&M store. I frequently copy operating system images to thumb drives that can be anywhere from 8 to 20 gig in size. The slow write speeds are extremely disappointing as other reviewers have also noted. I wish I had read them before purchasing this. No wonder it was on sale!

Pros: Read speed is very good. I get close to the 80 MB/s that is advertized.

Cons: I read the reviews before I bought this and several complained about the write speed. I bought this anyway since capacity was really all I was concerned with. Turns out the reviews were right. Write speed is pathetic. I can only get around 10 MB/s. I have had USB 2 flash drives that wrote much faster than that.

Overall Review: The advertizing for this is deceptive. "Ultra-fast performance up to 80 MB/s" They should have mentioned that was only read speed. You would assume from that it would write at least as fast as a USB 2.

Cons: With my PC it only works with USB 2.0 ports. It is not recognized in the USB 3.0 ports at all. All my ports work and operate as they should. I have other USB 3.0 and 2.0 drives that work and are recognized by the PC in the same ports this one isn't.

Overall Review: Did not test is soon enough and tossed the package, so I am stuck with it.

1 out of 2 people found this review helpful. Did you?
Manufacturer Response:
Hi User, My name is Allen from SanDisk support. SanDisk Ultra 3.0 USB flash drive is supposed to work with both USB 3.0 and 2.0 ports. We would need to gather more information about your issue which includes the model number of your computer, motherboard etc towards isolating it. I would suggest you to please contact SanDisk support at 1-866-SANDISK or submit a support request at www.sandisk.com/support. We will assist you towards a resolution including a possible replacement if required. Thank you, Allen, SanDisk support.
David P.
Ownership: 1 day to 1 week
Verified Owner
Leave This One Alone4/27/2014 1:40:37 PM

Cons: I have owned and used several Sandisk Flash drives. This one was my biggest disappointment, and will probably cost Sandisk a long time customer. I bought two of these, and my usb 2.0 Sandisk writes faster than both of them.

Overall Review: Way to go Sandisk. No wonder you don't advertise write speeds. Next time I want to throw away $100, I'll give it to someone else.

2 out of 6 people found this review helpful. Did you?
Manufacturer Response:
Hi Just Dave, My name is Allen from SanDisk support. I apologize for your experience. The Ultra USB 3.0 drive is high performance read drive but write speed is around 10MB/s, we do not advertise write speed for this product. If the write speed is of your primary concern, please go for our SanDisk Extreme Pro 3.0 and Extreme 3.0 drives. We suggest you to please contact SanDisk support at 1-866-SANDISK or submit a support request at www.sandisk.com/support for further assistance. Thank you, Allen, SanDisk Support
Lisa G.
Ownership: less than 1 day
Verified Owner
Fast as it reports but8/17/2014 3:43:34 PM

Pros: Read speed is close to what it reports on the package (80MB/s), Feels nice and retracted able slider works but... (see below).

Cons: Parkdale reported this at 76.5 read which is slightly less than the 80 reported. Write speeds are 9.3. Now, compared to my PNY 64GB Turbo Plus Attache, which I got around the same price, Parkdale reported 16R/106.4w. As far as the slider, it slides a bit too easy. It constantly retracts when trying to plug in into my OTG cable, which might be a bit tight. Of course, my PNY is on the opposite end of the spectrum which is that it's too resistant to retracting so....neither is perfect.

Overall Review: I planned to use this for my daughter's Nexus 7 since it doesn't come with the ability to add an SD card so with an On To Go (OTG) cable and some extra software, this will give me a bit more storage. I really don't need the high speed since the N7 is only USB 2.0 but it wouldn't have been nice since the price was pretty much the same as the PNY.