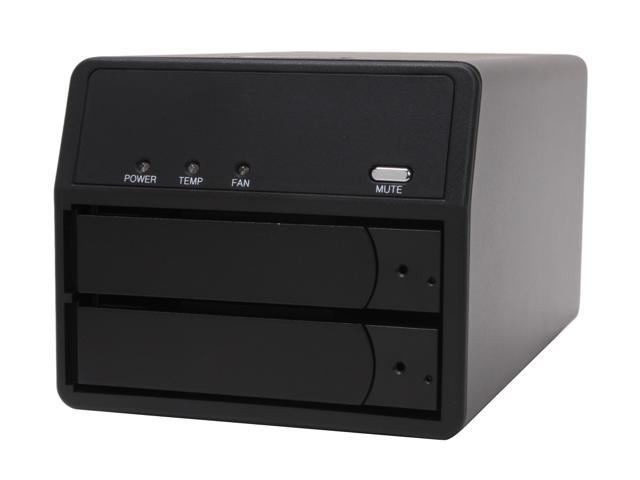 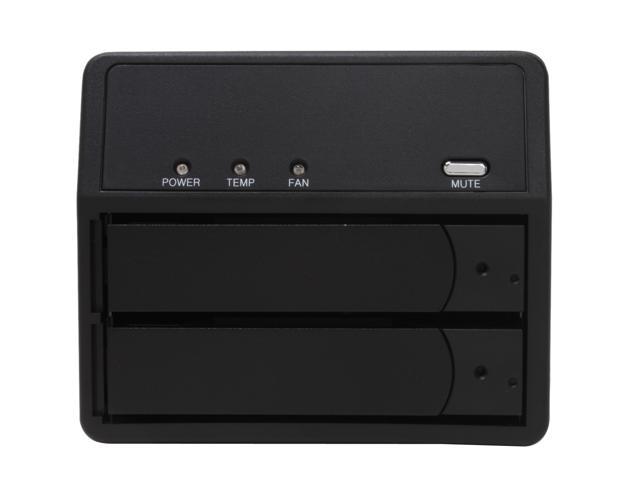 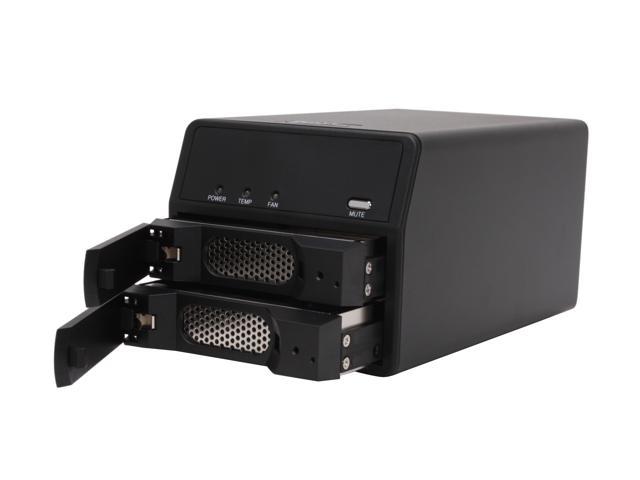 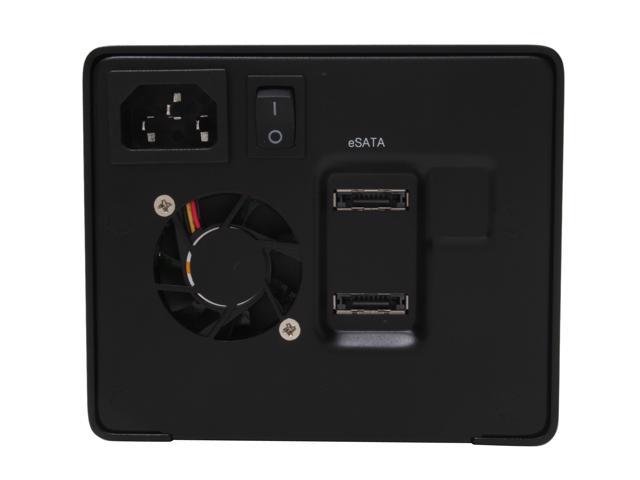 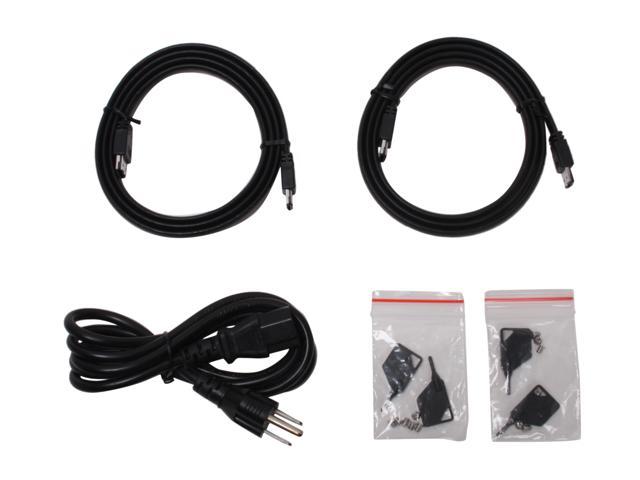 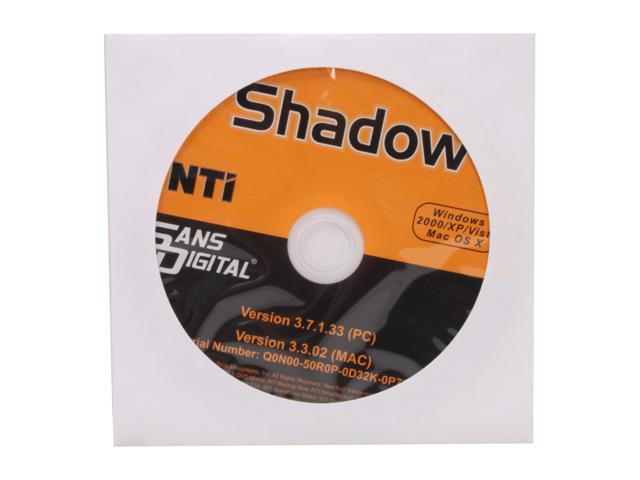 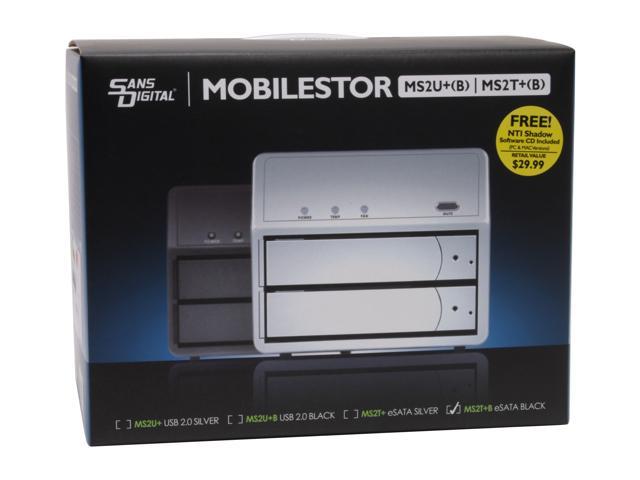 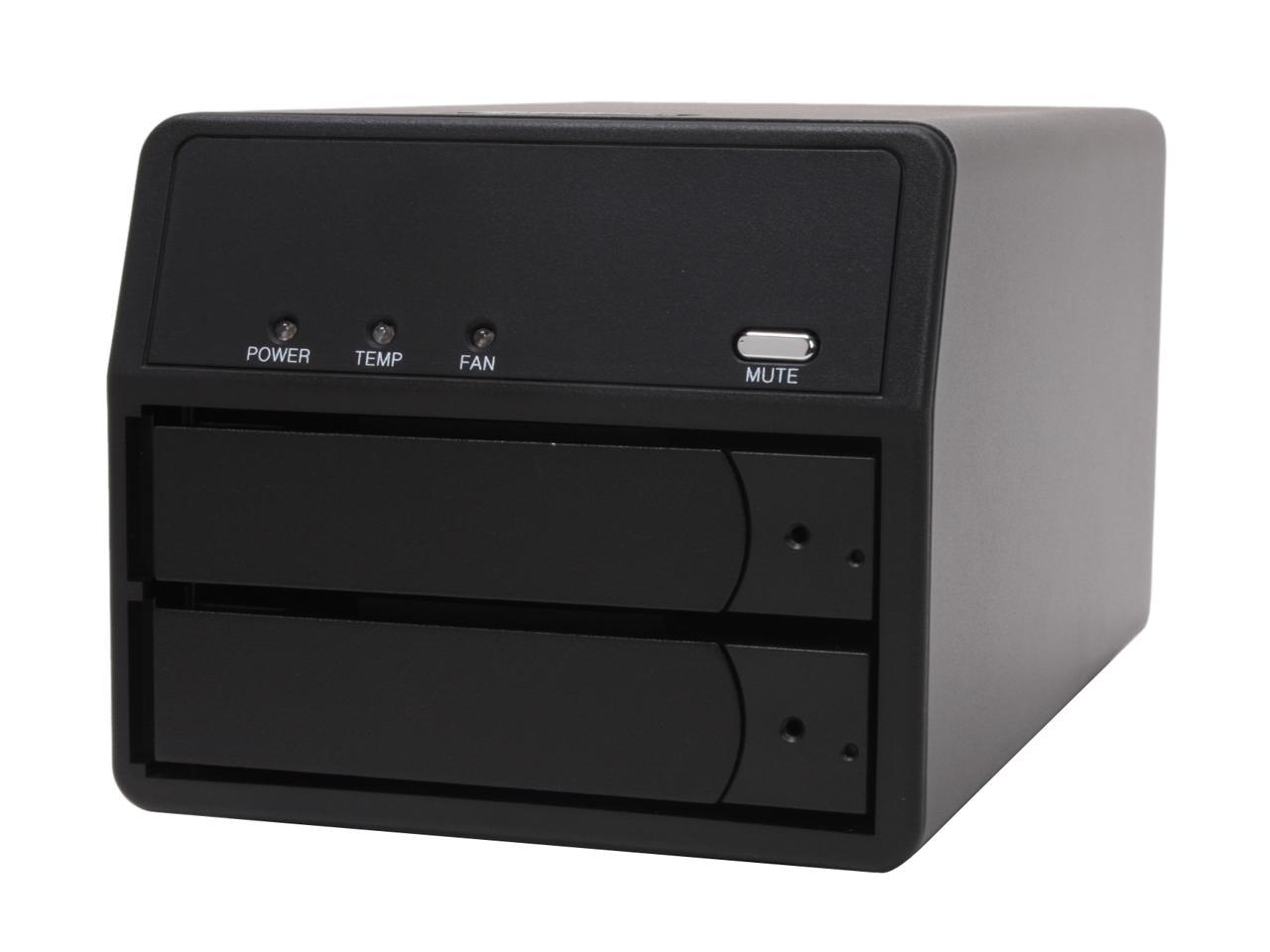 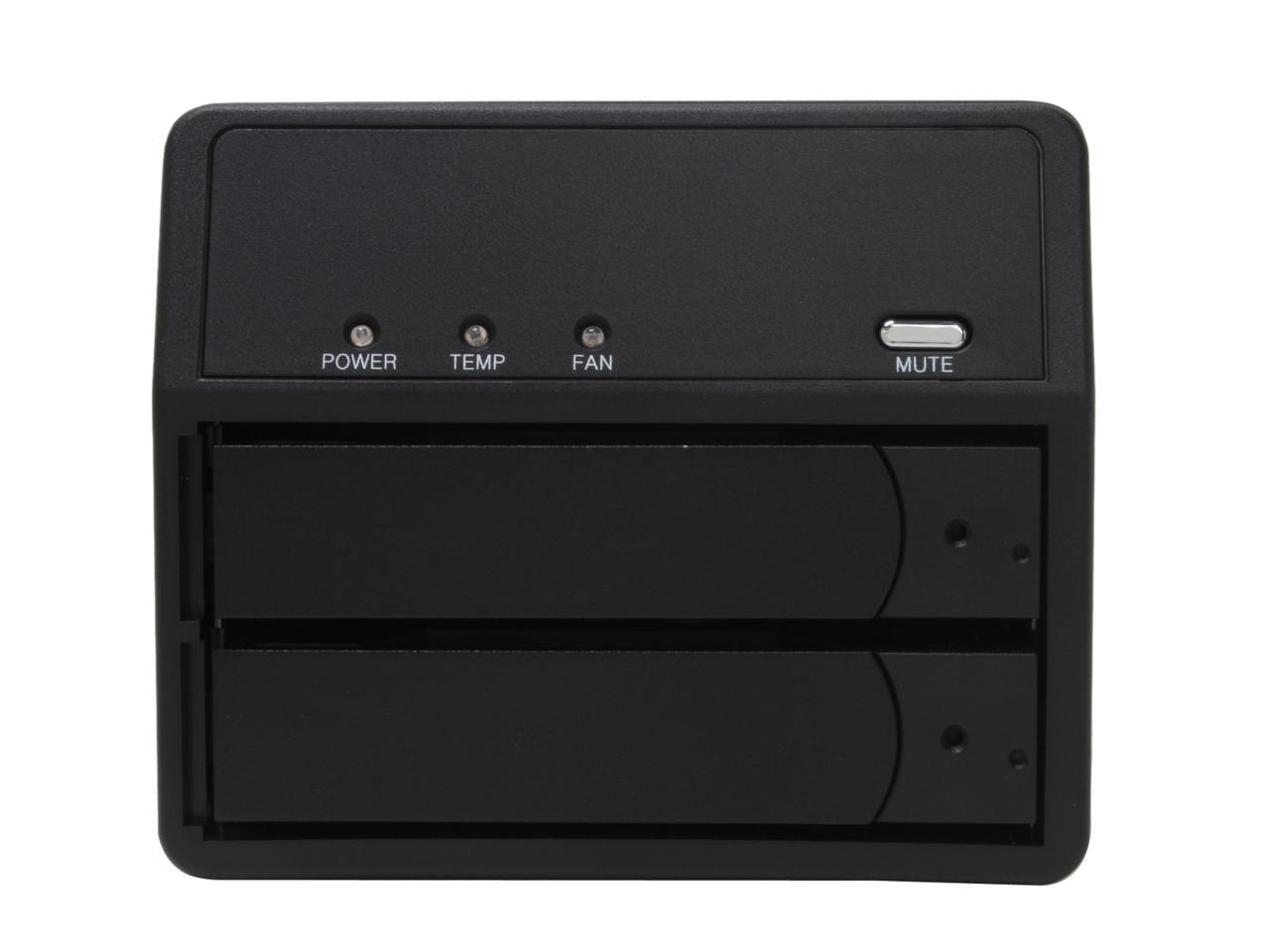 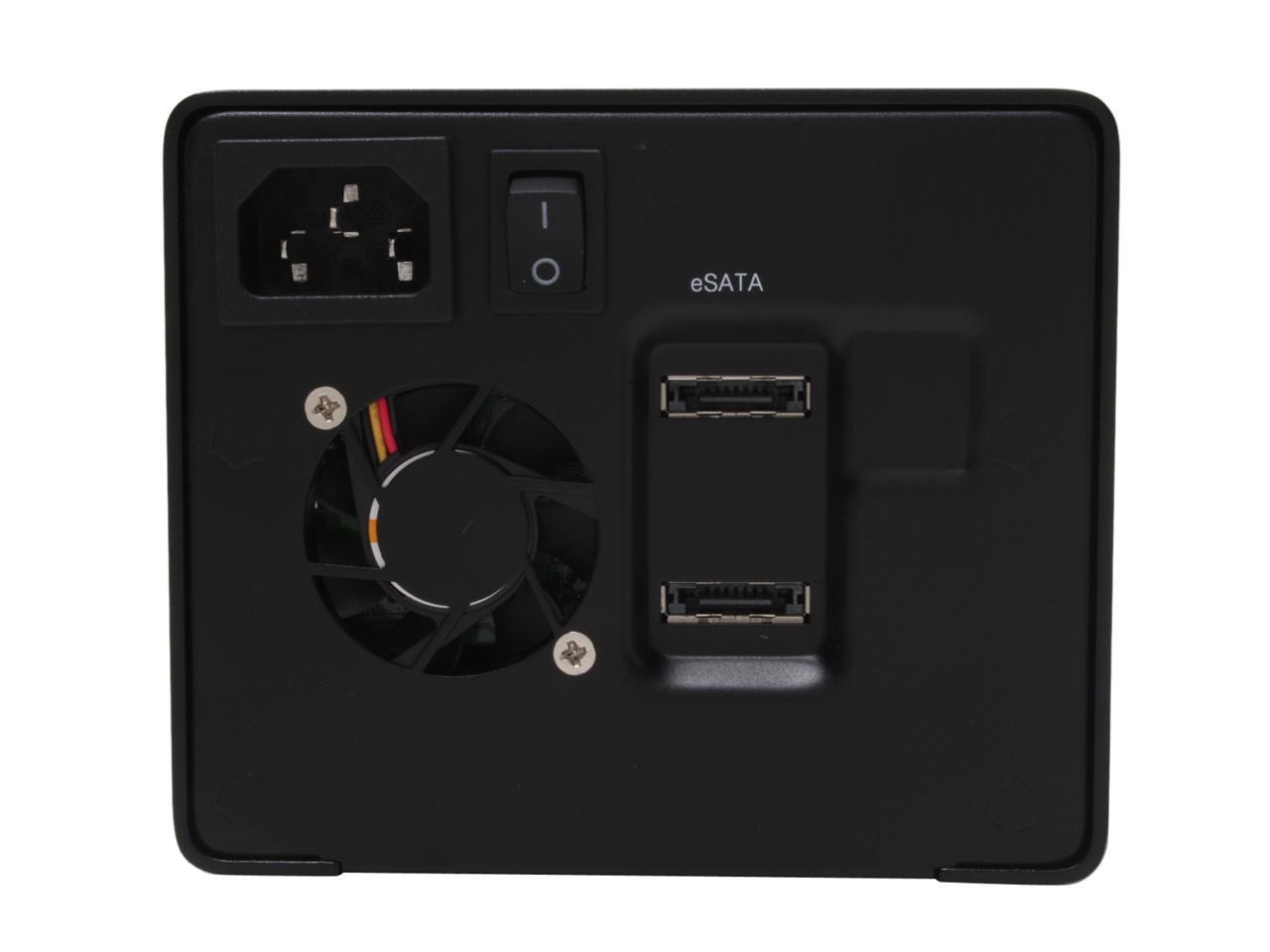 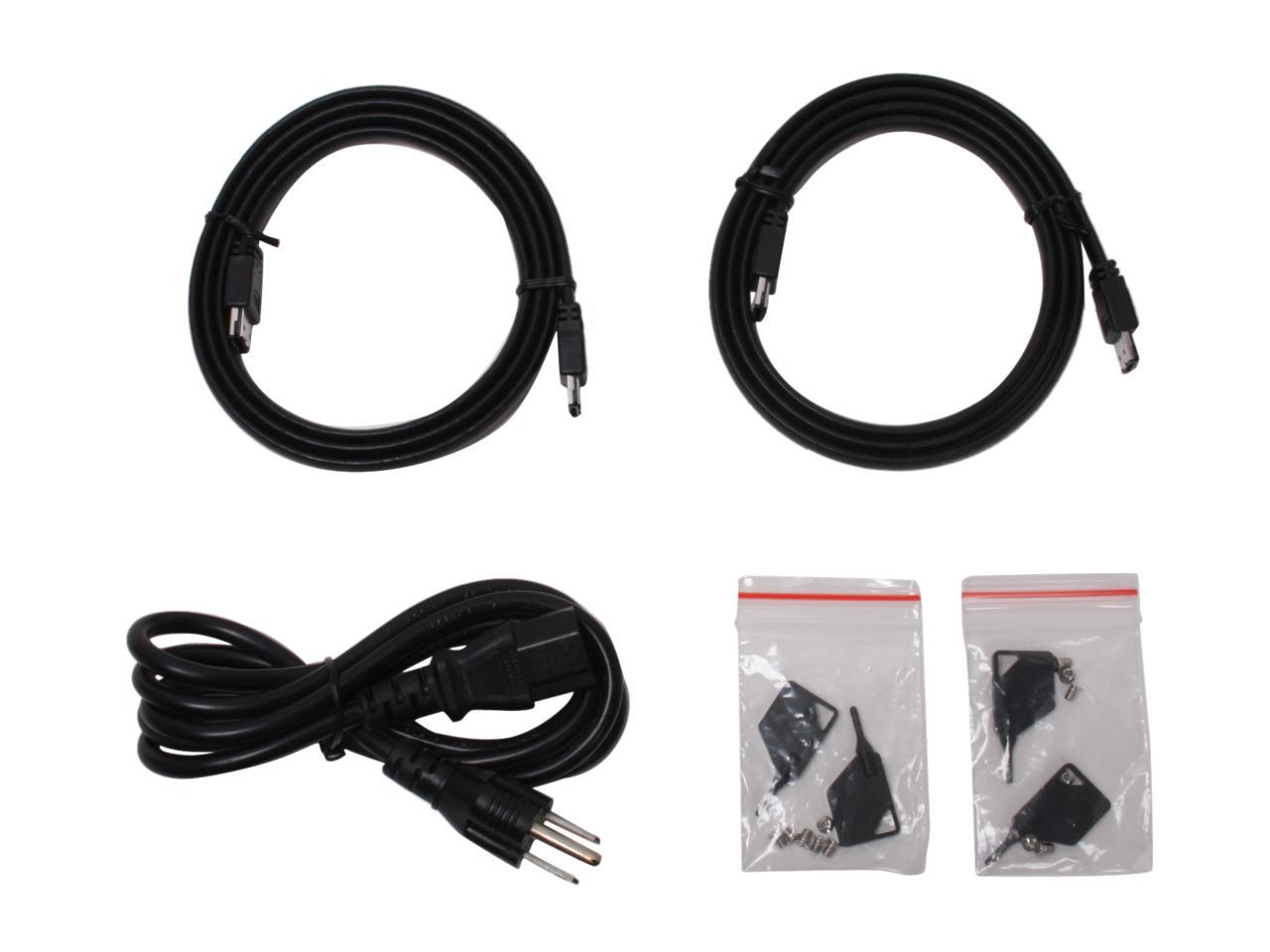 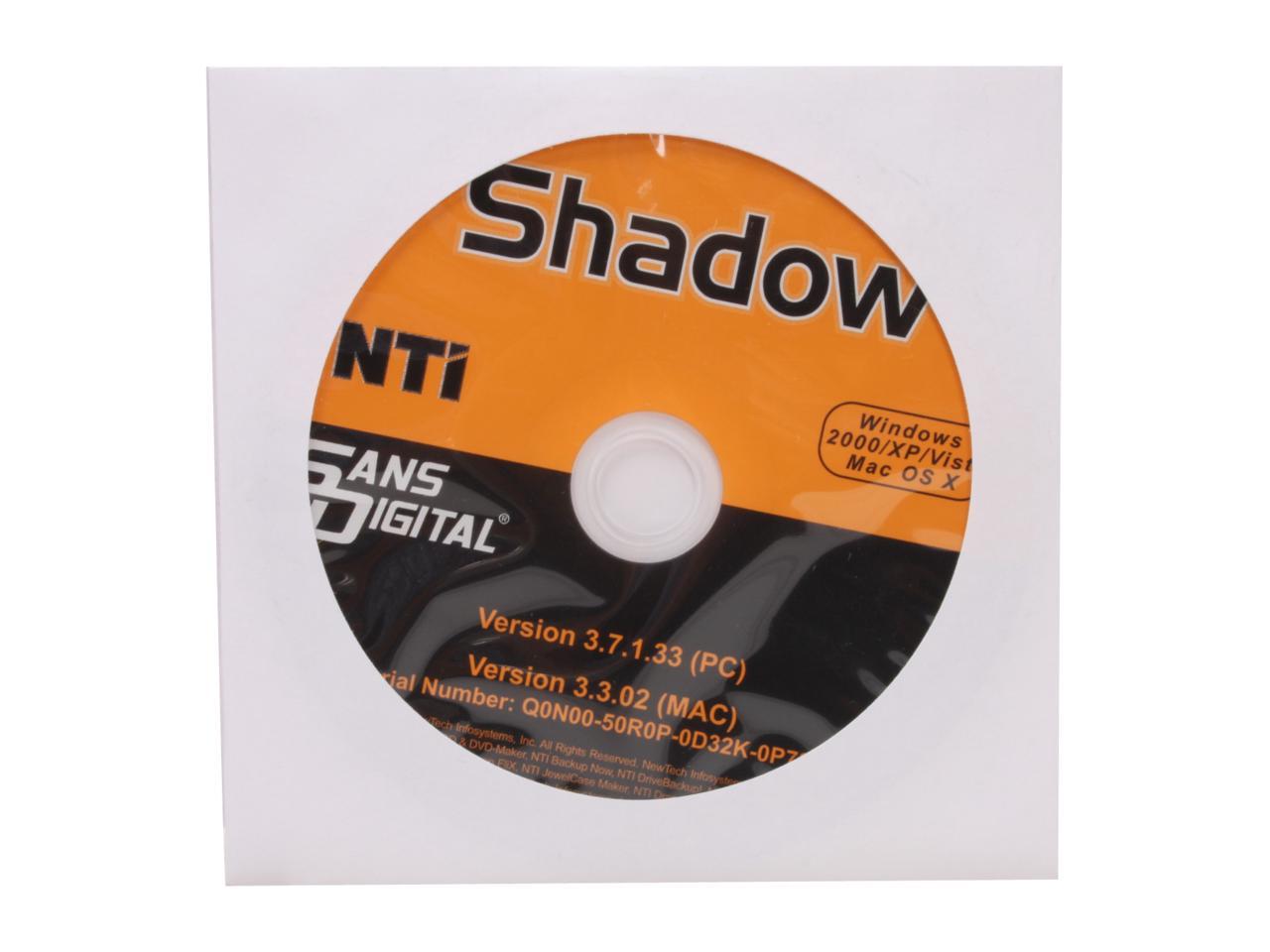 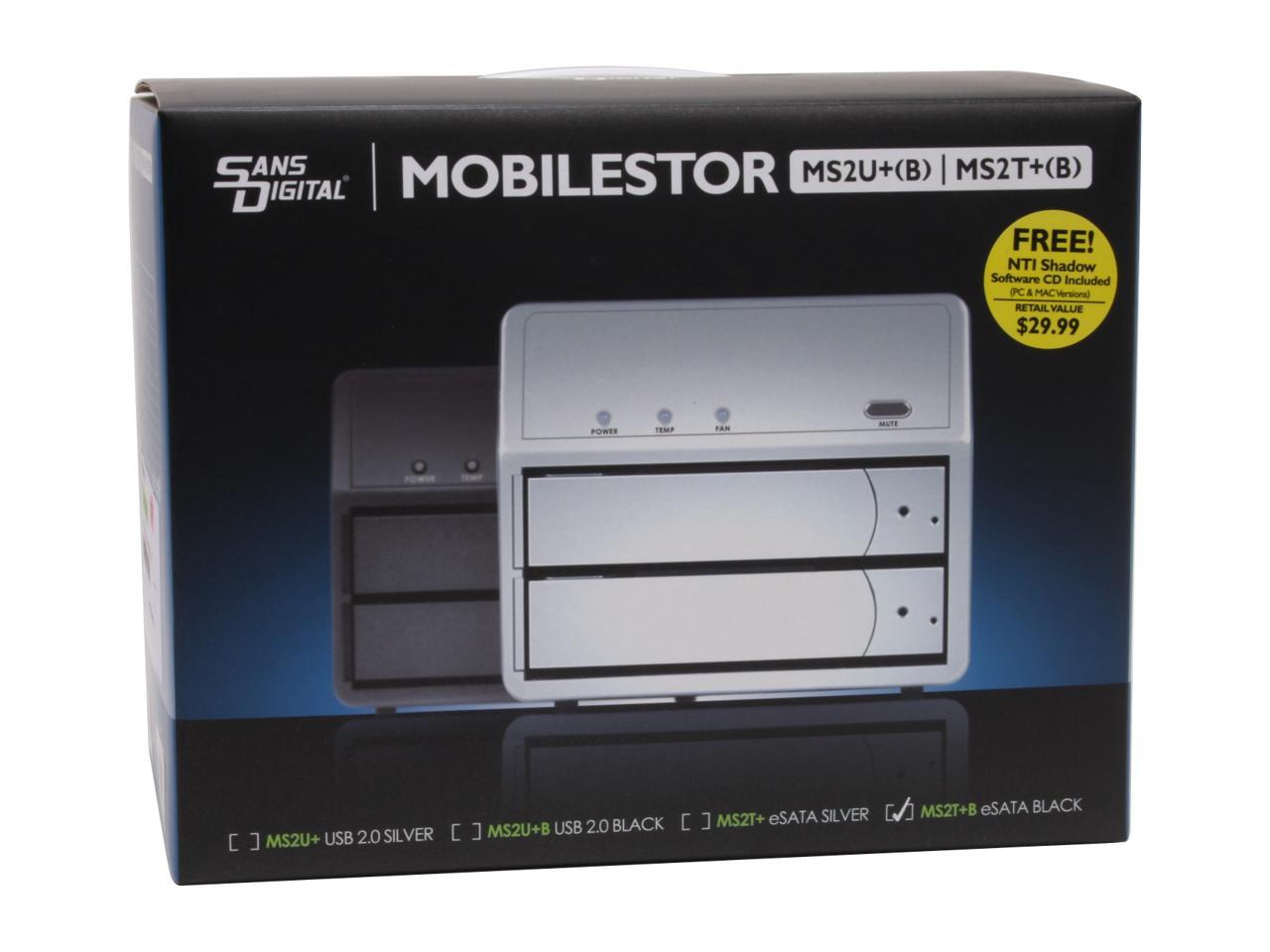 Pros: All metal construction, including the drive bay doors. Front light array includes separate lights indicating power on, fan on, temp (overheat) warning, and individual lights for each disk when in use. Two bays accommodate up to 1TB each. There is a separate eSATA port on the rear of the case for each disk, two eSATA cables, and an eSATA-to-SATA port for your computer. This is not a card or a controller, just a port, which will require two SATA plugs on your mainboard. There is also a real 110/120 power cable -- not a tiny wire attached to a block. As noted by another reviewer, the drive bay racks use non-standard screws for securing your disks, but this presented no difficulty. A dedicated key is used to open each bay drawer -- 4 were included in the box!. Installation of the disks was quick and easy. An excellent overall design, built to last. I've owned a lot of external enclosures. The design and build quality of this one makes it a top choice.

Cons: The fan is louder than I would had preferred, but some of this is surely contributed by the two 1TB hard drives I installed. There is a "mute" button on the front of the case, but it will affect only the case fan operation, not noise from disks. Take this into consideration when selecting hard drives.

Overall Review: This case is designed for adding two separate drives to your storage. There is no hardware RAID, and the accompanying port does not include RAID control. To implement RAID with this case can be accomplished if your mainboard includes RAID controller, or using a RAID controller card rather than the enclosed eSATA-to-SATA port. I used a NORCO-4618 4-port eSATA II controller, which has on-board RAID 0, 1, and 1+0 support. This increases the number of eSATA ports available, and since it plugs into a PCI-X slot on the mainboard, it does not require use of the SATA plugs on the mainboard.

Cons: eSata cables that came with it are to short.

Cons: First unit purchased burned out after only 6th months. Seems that the power supply went out on it. Disappointing as it pretty much that is all it is..

Overall Review: Actually bought 2 more units, one to replace the bad one, and another so client is not down if the replacement fails.

Manufacturer Response:
Thank you purchasing our product. If the power supply is fail within one year, the product is still under 1 year warranty period, please contact our technical support at tech@sansdigital.com or 1-800-980-1988 to request service on defective unit.
Peter L.
Ownership: 1 week to 1 month
Verified Owner
Works great3/22/2011 2:14:31 PM

Pros: Works just great.....quiet and cool. Has two eSATA plugs and cords so no need for a port multiplier.

Cons: Hope they make one that will deal with more the two TB in the future.....

Overall Review: Works perfect for what I needed it for and the price is cheap for how well it is made.

Cons: eSATA connectors in general are not self-locking, and purely rely on friction to hold everything in place. It might just be my unit, but the eSATA cables can *easily* fall out of this with just a little nudge. It's bad enough where I don't feel safe using this JBOD.

Overall Review: This would be 5 stars if it weren't for the plug issue. I've tested it on 3 other eSATA devices with the same cable, and this one has the loosest plug of them all.

Manufacturer Response:
Thank you for purchasing our product. The eSATA cable do provide a very small latch to prevent fall out. If you have further question, please contact us at 1-800-980-1988 or e-mail us at tech@sansdigital.com, and we will be able to help you out.
Todd B.
Ownership: 1 month to 1 year
Verified Owner
Solid little box5/20/2010 11:02:26 PM

Pros: Software RAID capable No port multiplier (see below) Quiet, cool, and solid as a rock

Overall Review: I replaced a case that had a port multiplier because Snow Leopard was having issues with my eSATA card. This was a godsend as at least two of my backup drives were able to run...

Cons: Screws are not regular size so you have to use the correct screw driver to remove the mental bar that connects both ends of the case where you put in your drive

Overall Review: TIP: For your eSata to be seen by Vista 64 ultimate, you need to turn-on the eSata drive first, then use the Disk Managemetn to enable/format the new drive to NTFS before you can use it. This tip is not included in any manual.