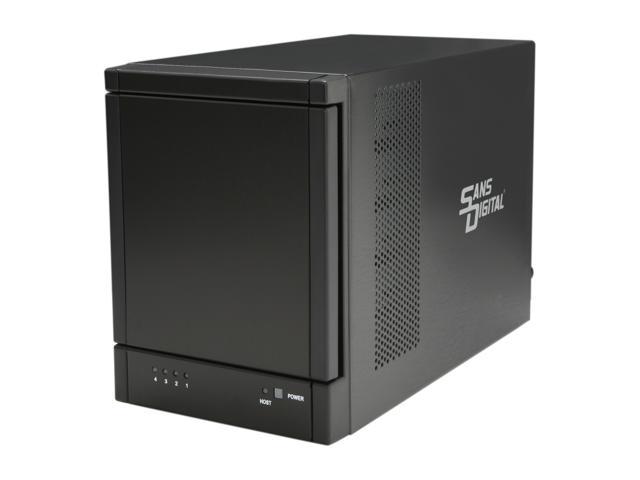 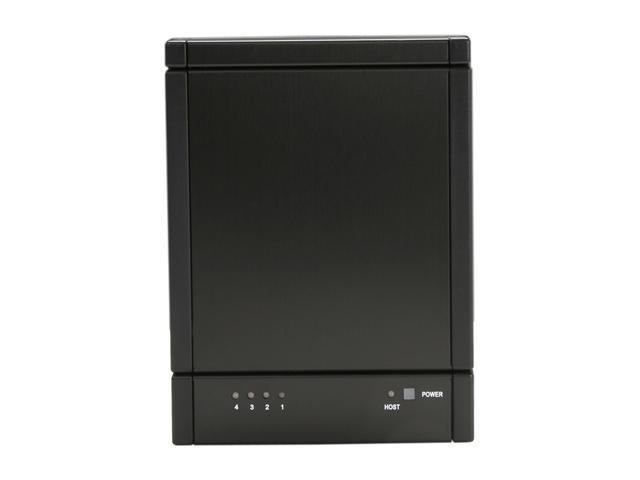 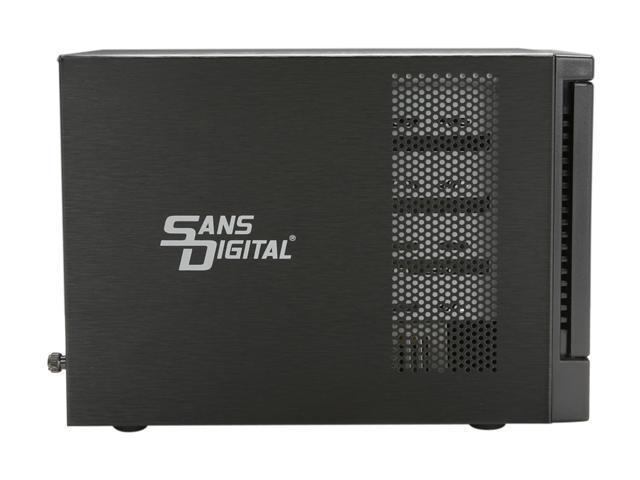 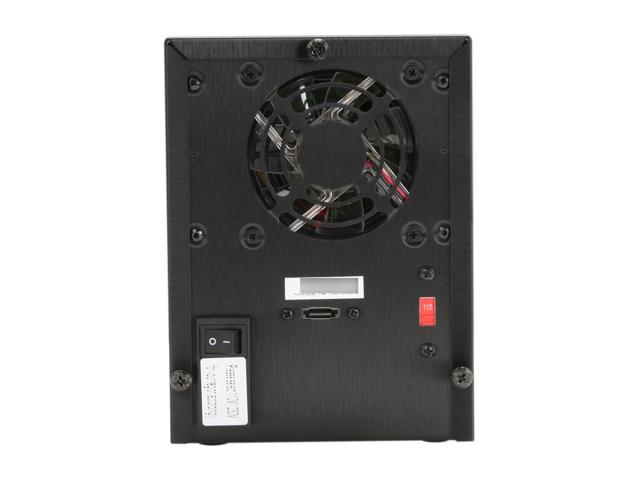 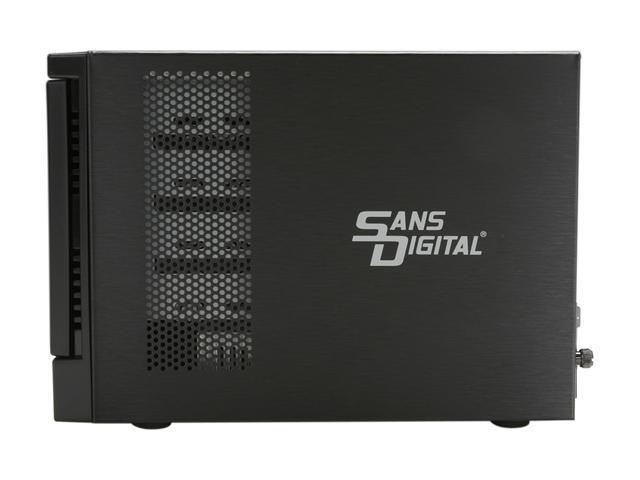 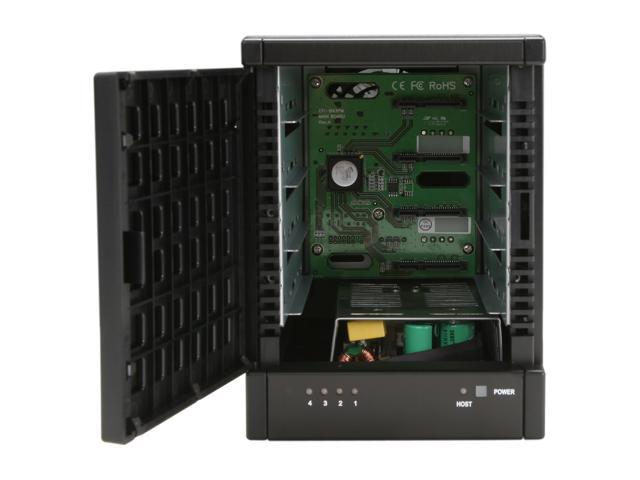 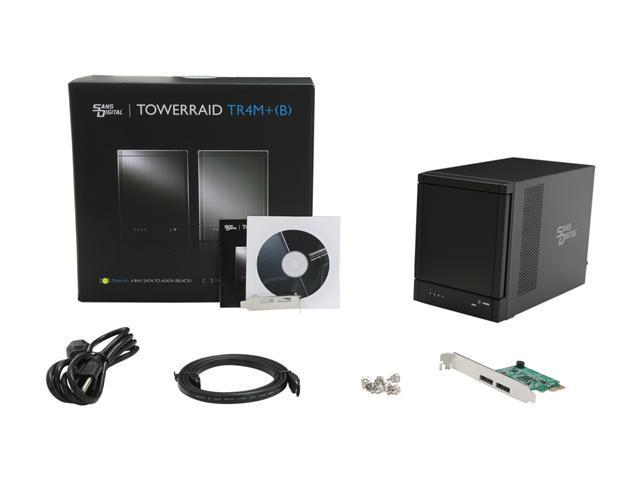 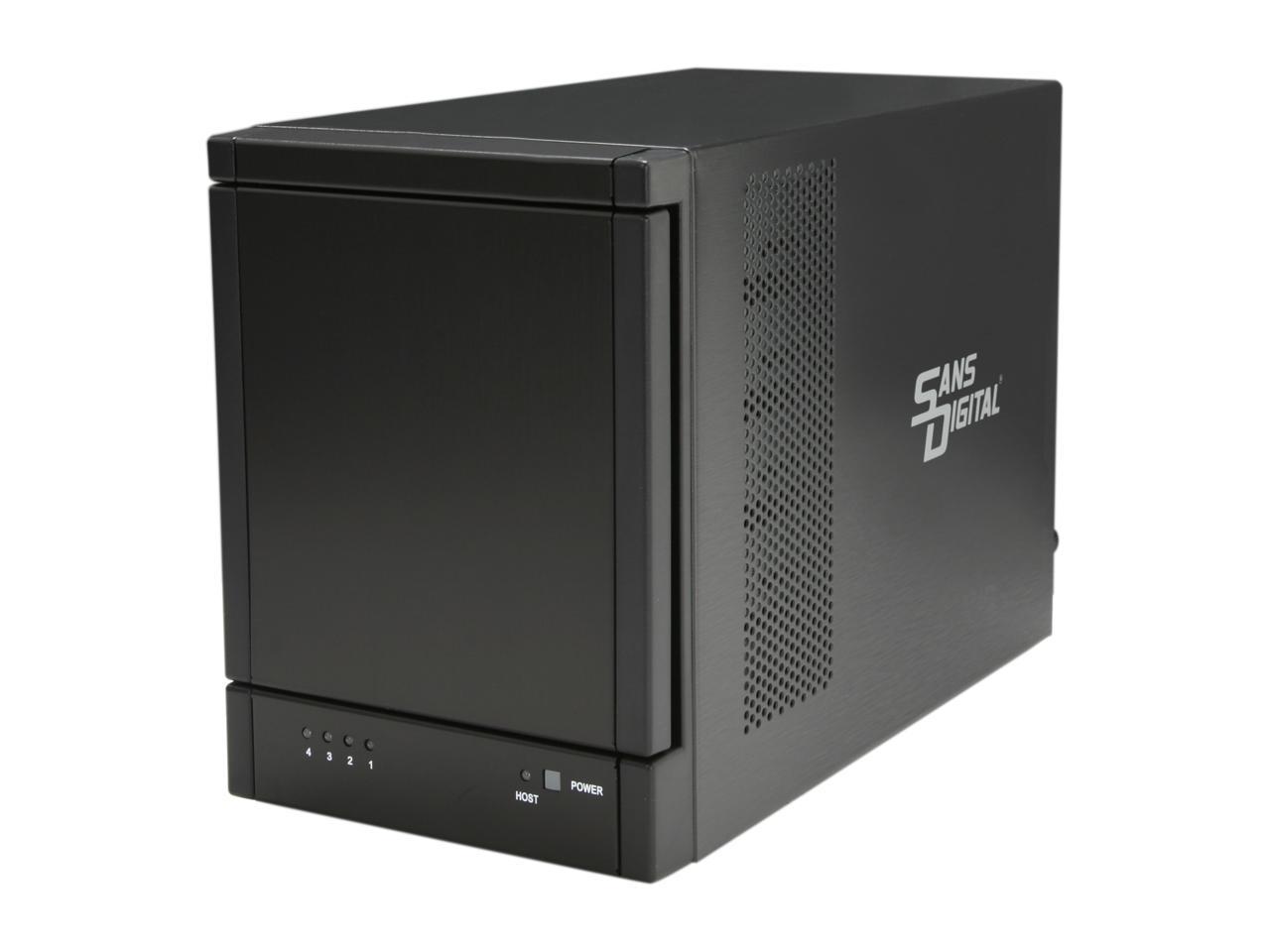 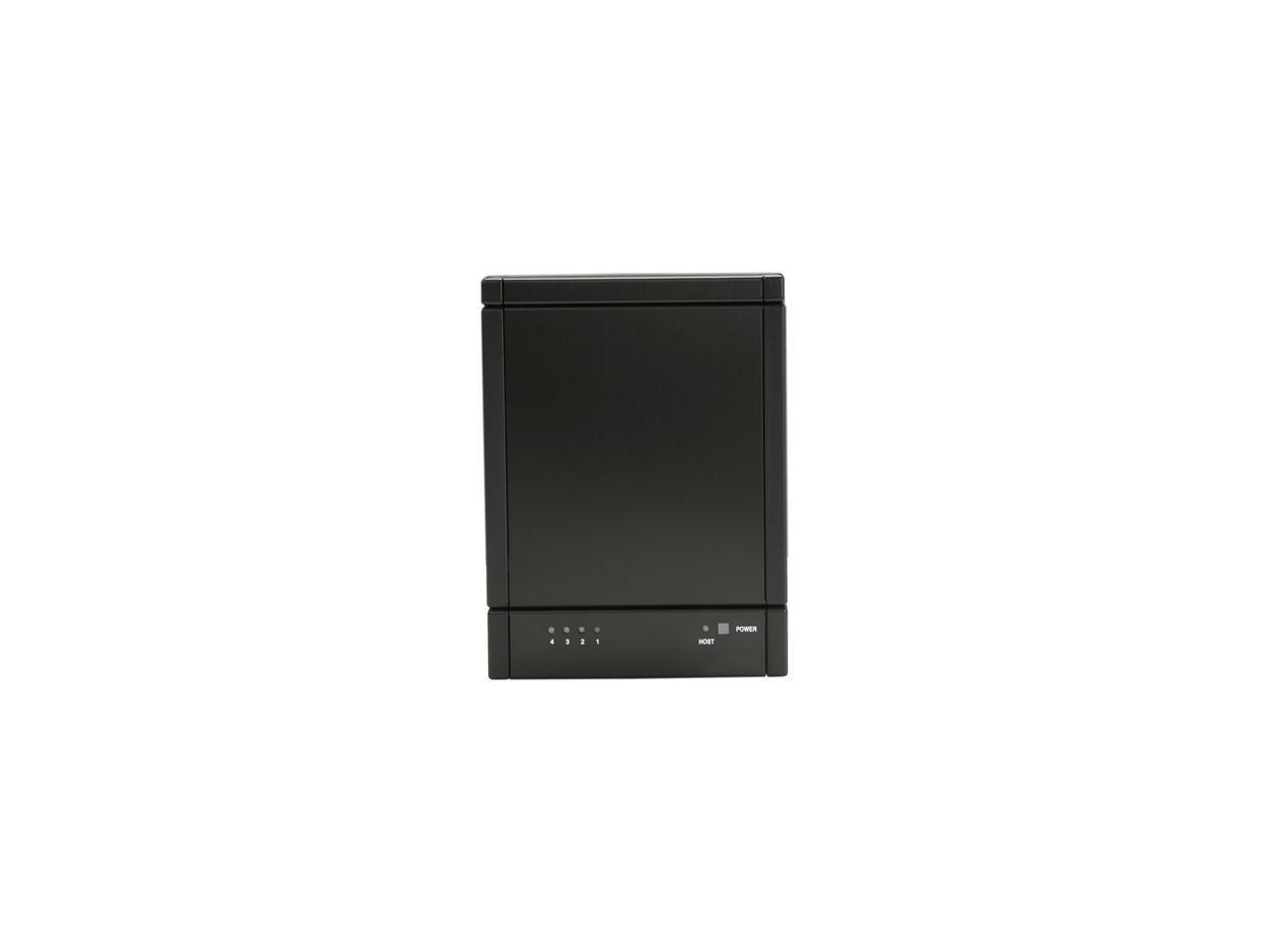 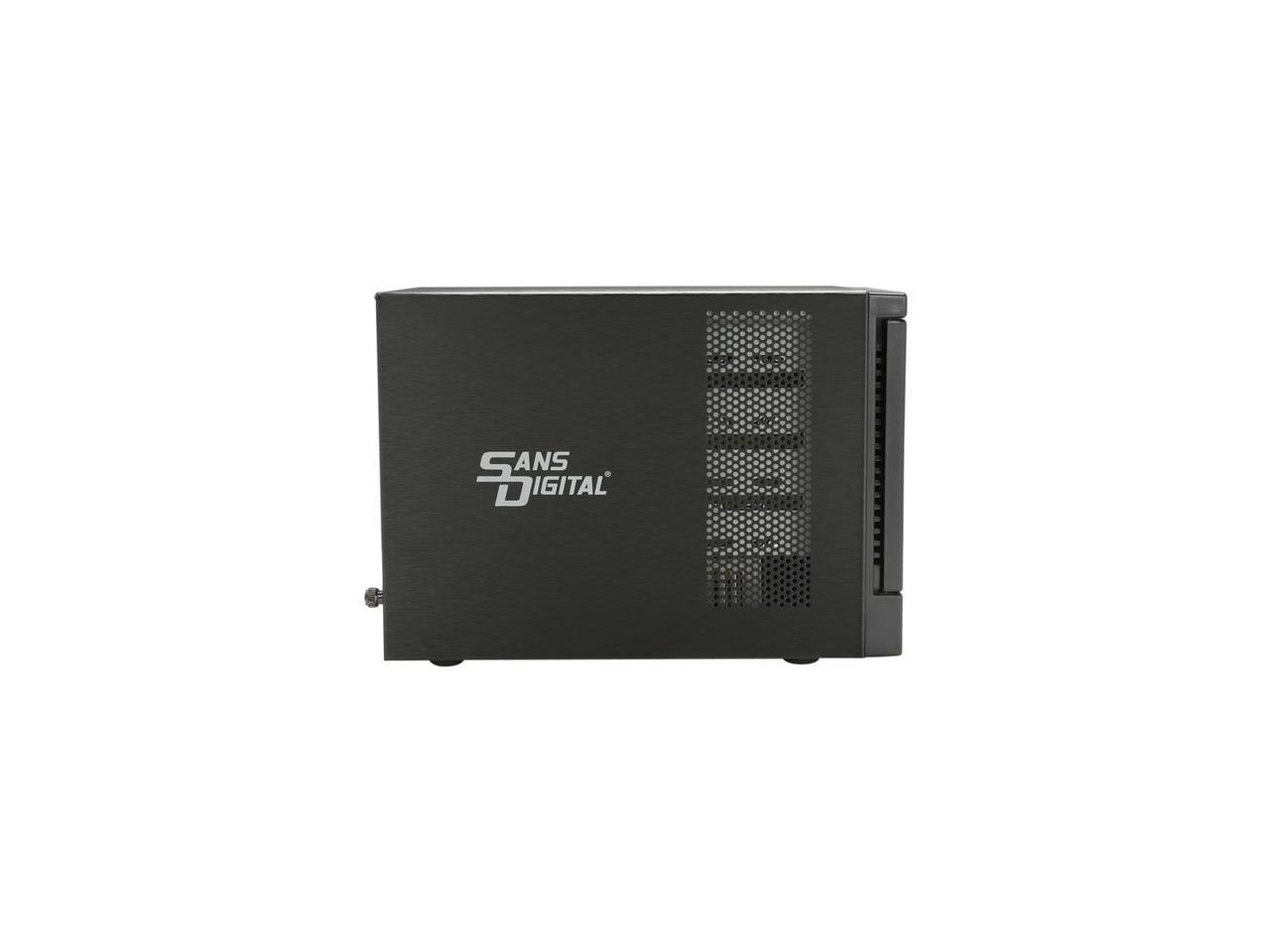 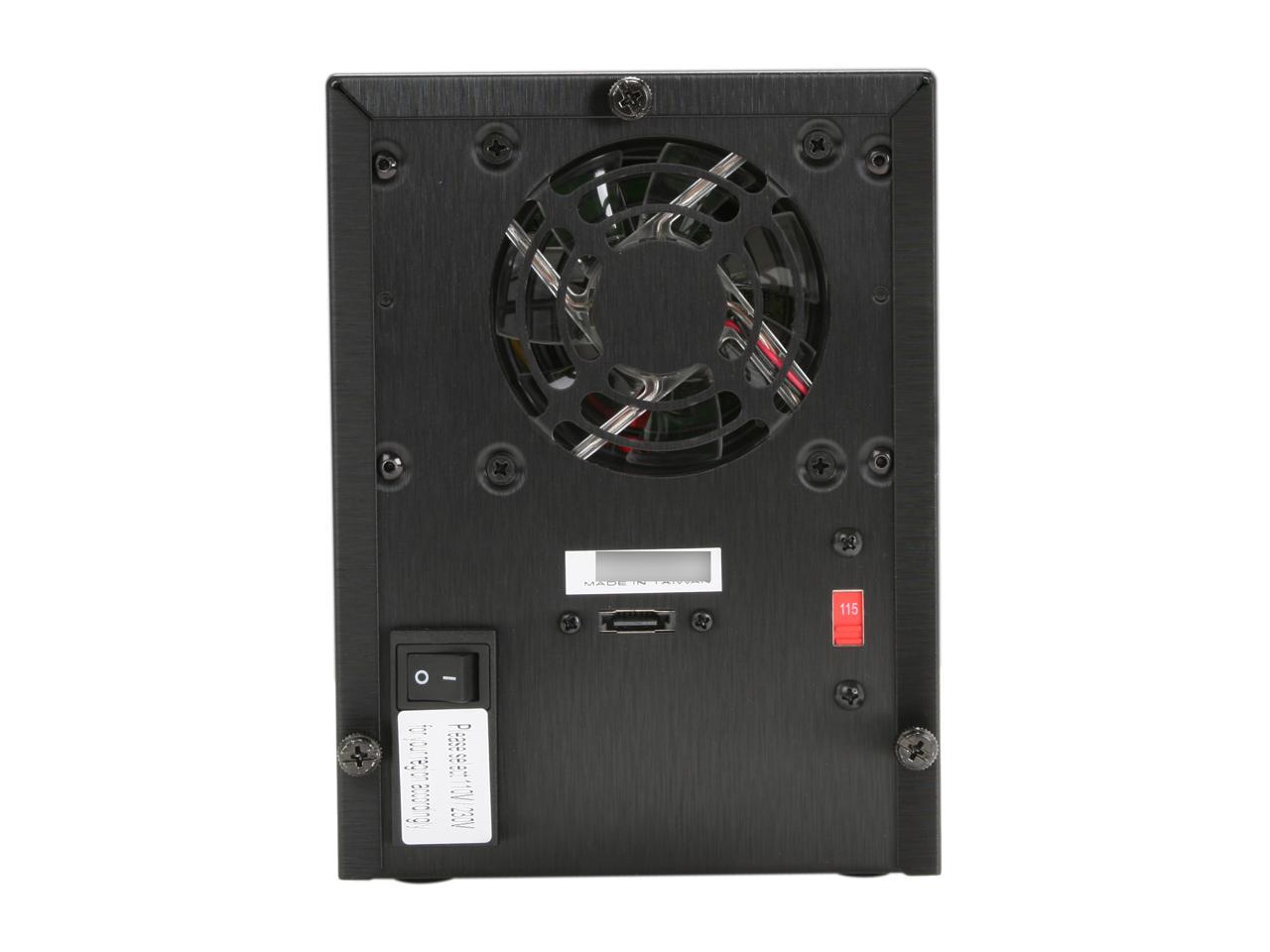 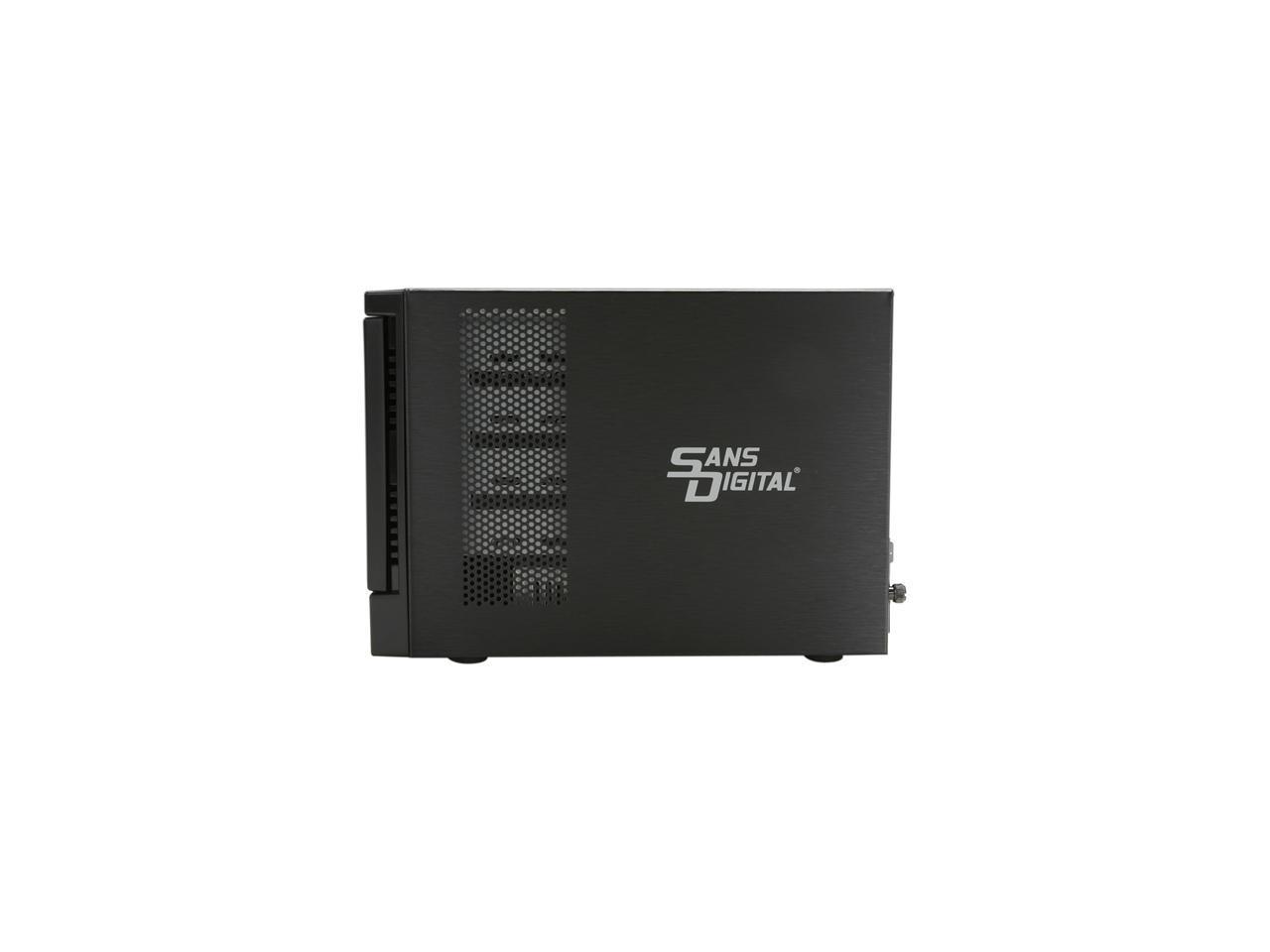 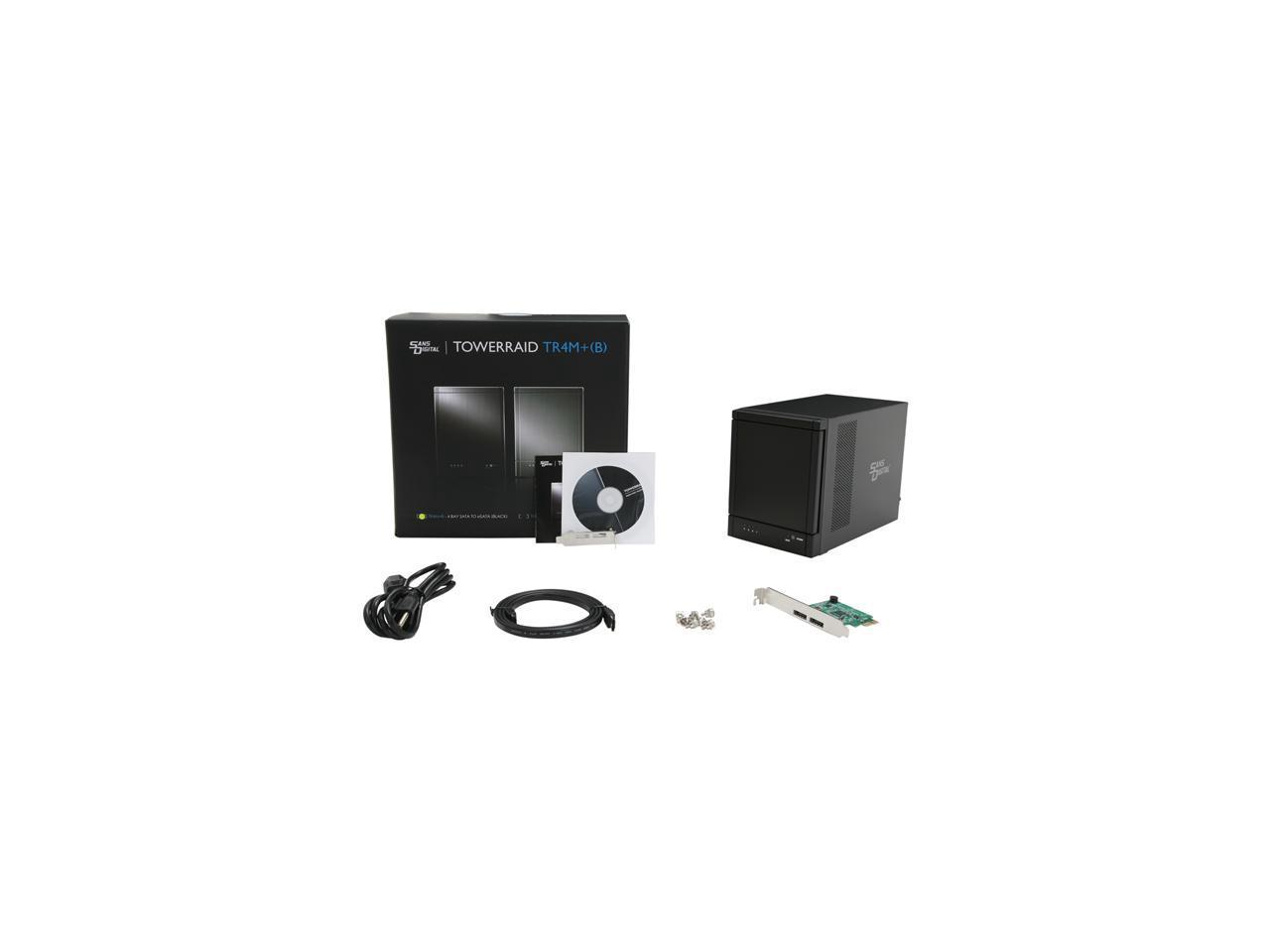 The TowerRAID TR4M+B is a compact RAID tower utilizing the latest SATA II port multiplier technology, where one single eSATA cable connects to four 3Gbps SATA II hard drives. Bundled with a high performance RAID controller card RR622, its RAID 5 performance is capable of reaching over 200MBps. Online expansion is included in the controller card so that RAID can be expanded without the need to recreate the storage space or erase the existing data. Advanced monitoring functions include real time hard drives health status and e-mail notification for critical events.

Designed with easy installation in mind, the trayless TR4M+B allows instant setup by simply inserting the hard drives after opening the protective ventilating cover. The included dual-port eSATA 6GBps PCIe 2.0 x1 RAID controller card allows the connection of up to two TR4M+B units (up to eight hard drives) using only two cables, while all drives can be configured into single or multiple RAID arrays, providing over 200MBps in performance. Pros: Very well built unit, definitely not a cheaply built chassis. Even the screws to secure the drives in the bays were nice chrome plated thumbscrews - you don't even need a screwdriver to setup and install the unit. I filled it w/4 - 1TB drives (2 new, 2 existing) to make a 3TB RAID 5 array for WHS 2011. Easy to install drivers during WHS2011 setup. However, I eventually had to create the array from the boot BIOS because the WebGUI would only let me use the two new drives. Once the array was created, it initialized and formatted while WHS was running - although it took about 27 hours to prep/format the array. I moved the user folders to the new drive and started loading it. It was about as easy a process as I could have imagined. There is a bigger learning curve to WHS2011 than there is to getting the TR4M+B going.

Cons: Instructions could have been better. The Quick Start brochure was not terribly useful and the manuals on the CD helped some but were not terribly detailed. Some people rail about the blue light on the fan but the back of my unit faces the wall - and if I'm working in the my office at night I have a light on which eliminates the effect anyhow.

Overall Review: I've been wanting to buy something like this for some time but prices were never in my ballpark. This unit is a great value considering it is bundled with an adequate eSATA/RAID card. I'm sure there are other cards that have higher performance specs but this card worked flawlessly out of the box and that counts for something.

Pros: I use one at home and one at work. Both are faster than my previous solution and saved me from transplanting my computers into larger cases (something the boss would not have supported with my work machine). Both have been running reliably for almost a year now. For me this was a great way to add spindles I needed at a reasonable price (it helps I got both of mine on sale :) ).

Cons: The initial setup gave me some headaches and the device can be painfully slow on bootup. Speed appears to be bottlenecked so the array never goes faster than having two striped drives (of the same speed as I have in the array). At home I filled it with 5400rpm drives for media and VMs in a RAID 5 configuration. At work it has 3 (older) 500GB drives striped and is the host drive for several lab VMs.

Pros: Fast. Works fine until I put my computer to sleep.

Cons: I don't like the case, even if it is toolless. It's hard to get the top on or off. You're risking your knuckles. After I put my computer (a 2008 Mac Pro) to sleep and wake it up again, I can't access any of the drives until I reboot the computer. Sans Digital blames HPT, the manufacturer of the SATA PCI card. It may be their fault, but it's now my problem. I've been waiting over two months for a fix. I'm not inclined to buy another Sans Digital or HPT product again.

Manufacturer Response:
Thank you for purchasing Sans Digital Product. MAC Pro sleeping mode issues is supported by the latest driver updates. Please download it from our website or contact us to obtain the drivers. If you are having problem on the unit, please contact us by calling 1-800-980-1988 for technical support and our engineer will try to resolve it over the phone. You can also contact us at tech@sansdigital.com for e-mail supports.
John T.
Ownership: less than 1 day
Verified Owner
Overall good, but go with the non-bundled controller version2/28/2013 8:00:55 AM

Pros: Works exactly as expected when not using the bundled controller.

Cons: The bundled controller is junk, throw it out and save yourself from all the headaches people are having. What I found when trying to use the bundled RR622 was ... - The RR622 does not seem to support true JBOD, but rather some RAID0 type hybrid that lets you create 4 individual RAID devices! - The RR622 does not work with ESXI 5.1 (not visible) What was funny is I had another eSata PCIe laying around (StarTech PEXESAT32) and figured what the heck give it a try. Guess what, the thing now works EXACTLY as expected. Native JBOD and ESXI see's them as native HDD's!!!!!

Overall Review: In my opinion, overall this was a good deal, but I also got the $30 rebate (missed the extra $20 though, grrrr!). I will be getting another soon, just w/o the bundled controller.

Pros: Bundled eSATA card was trivially easy to install under WS2008R2, and it comes with drivers for virtually all versions of Windows, Mac OS X, and various Linux variants. Web Management software is very good compared to those offered in low-end NAS devices. Installed and ran quite smoothly on WS2008R2. Throughput absolutely blows the socks off of the StorCenter ix4 and Thecus NAS devices I've worked with in the past. Granted, you have to have a computer to act as the host, but given the low cost of the TR4M+B for hardware RAID, that is a reasonable tradeoff. A refurbished PC with a free PCIe slot and 2 GB of RAM, combined with the TR4M+B, would make a much faster and manageable NAS than buying a similarly priced Iomega or Thecus NAS. Other reviewers have complained about the heat but the temp monitoring software built into the unit (and monitorable via the web interface) showed my 3-drive 7200 rpm config to hit no more than 93 degrees after two hours of initialization.

Cons: Long format time, although this is not really a negative. Most low-end NAS devices I've worked with take quite a while to format for RAID use. Even under WS2008R2, if one created a Windows software RAID5 array and did a full, as opposed to "quick format," it would take a few hours to initialize a 4 TB RAID 5 array.

Overall Review: As most other reviewers have stated, the unit is solid and very well built. I've paid a lot more (e.g., the Thecus units) and seen much poorer quality.

Pros: We purchased it on sale at $99. The enclosure seems sturdy.

Cons: Oh, where to begin: 1. RAID card was DOA right out of the box. It took roughly two weeks to receive a replacement card. Tech support was great, if not limited to one response a day. 2. Replacement RAID card worked fine for four days and started to become very flaky, sometimes recognizing the drives but more often than not, it only saw the first drive. When the card DID see all four drives, it couldn't always tell that there was a RAID array. Reproduced the problem in four machines with different Intel motherboards (D965WH, D975XBX2. DX58SO and DZ68BC). 3. Replacement card did not have updated BIOS. Downloading anything from High Point Technologies' website is painfully difficult as their web servers can deliver only a whopping 2kb/sec transfer rate. 4. Plugged enclosure in to another controller card which saw every drive on every boot, saw that there was an array on those drives but, sadly, couldn't do anything with it except offer to create a new array (which was expected

Overall Review: Buy yourself just the enclosure and save yourself some headaches by going with another RAID card that can support eSATA port multipliers.

Manufacturer Response:
Thank you for purchasing our products. The unit should be able to see 4 drives with a single eSATA cables. The problem on the review could either cause by the eSATA cables, the card, the drives selection or the enclosure itself. Please contact our technical support at tech@sansdigital.com or 1-800-980-1988 and we can help to identify and resolve your issues.
Manuel D.
Ownership: 1 day to 1 week
Verified Owner
Very slow11/2/2012 8:15:14 AM

Overall Review: Flashed the BIOS with the JBOD version found in the supplied CD. After that the drives were recognized the my unRAID server running on an HP Proliant N40. I could not, however, get more than 10MB/s read speed out of my drives. I am probably going to RMA this unless I find some "tweaks" so I can get acceptable speeds.

Manufacturer Response:
Thank you for purchasing our products. Your total performance is about 200MB/s. Since TR4M+B is based on RAID on controller card, the performance is greatly depend on your system. If performance is critical for your application, we would recommend TR4X+B. TR4X+B will have direct connection for each drives, 6G * 4 hard drives to your host computer. Please contact us by calling 1-800-980-1988 for technical support and our engineer will try to resolve it over the phone. You can also contact us at tech@sansdigital or visit our online forum.

Pros: The enclosure is very well built, no complaints here. I owned Sans Digital enclosures before and they were always my favorite.

Cons: The included card is an obnoxious garbage. I have two enclosures with 3 drives in each, not in RAID, just individual drives. It takes 52 seconds to scan the drives during POST. You can boot a whole PC in less time this card takes to scan for 6 hard drives. More: by default the card will override your mobo Int13 boot setting and regardless of your mobo BIOS boot order settings it will be the default boot device. This means that if the enclosures are powered up your PC will not boot. You can boot with enclosures powered off and turn them on after Windows loaded. There is no setting in the card BIOS or its Windows software to change this behavior. I mean how stupid is it to assume that whoever buys this will use it as a boot device and provide no simple option to change this?!? The only way to change this is to flash the card's BIOS and change the BIOS parameters during the flash. The included Windows/Web monitoring software is ugly and buggy to the point of being useless

Overall Review: Drop this garbage and include a better card and I'd give it 5 eggs. I will look for a better card to replace this junk.

Manufacturer Response:
Thank you for purchasing our product. Since the controller card allow you detect the drives before the OS loaded, it take times to do so. If you intend to use it only as JBOD, we have a modified BIOS version included in CD as well available upon requested. Please contact our technical support at tech@sansdigital.com or 1-800-980-1988 and we can send you the update and walk you via the update.