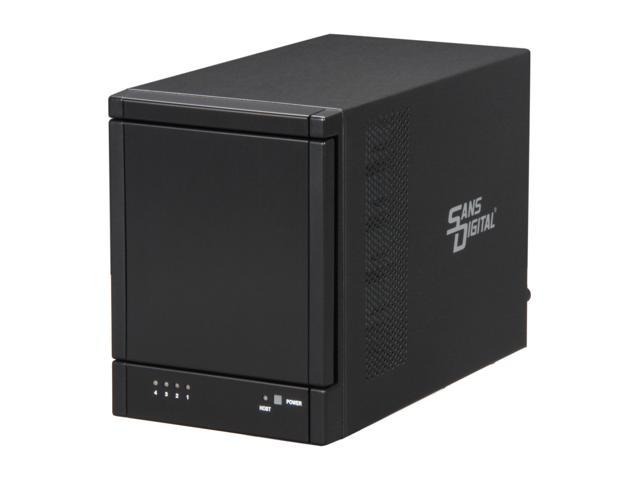 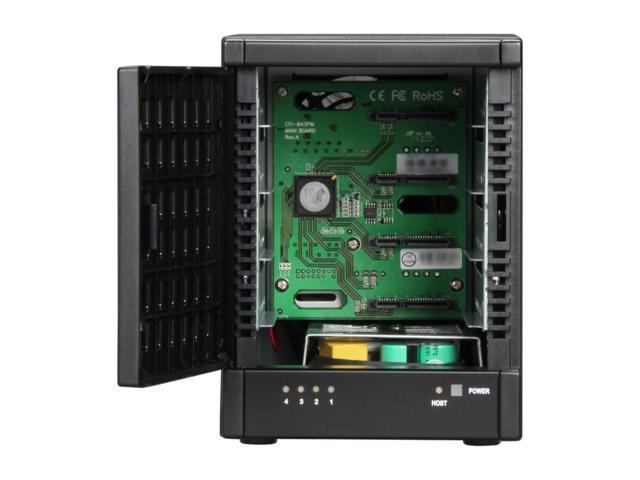 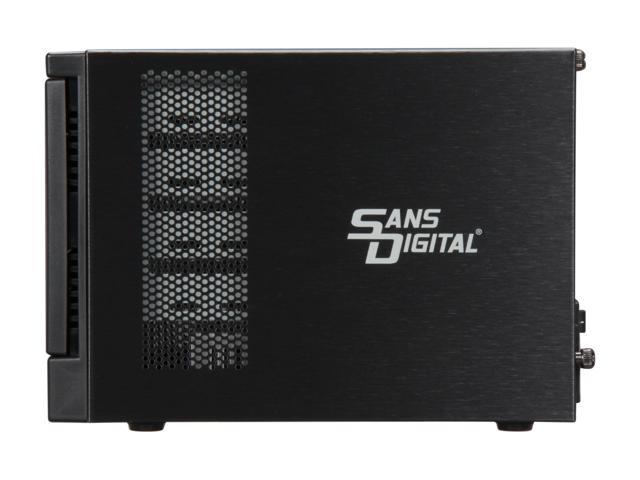 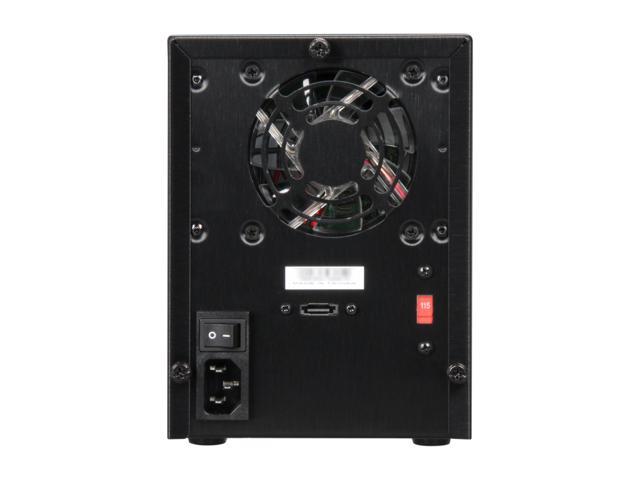 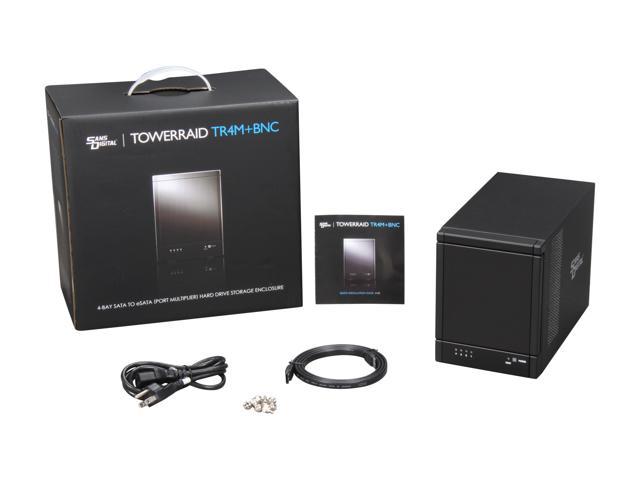 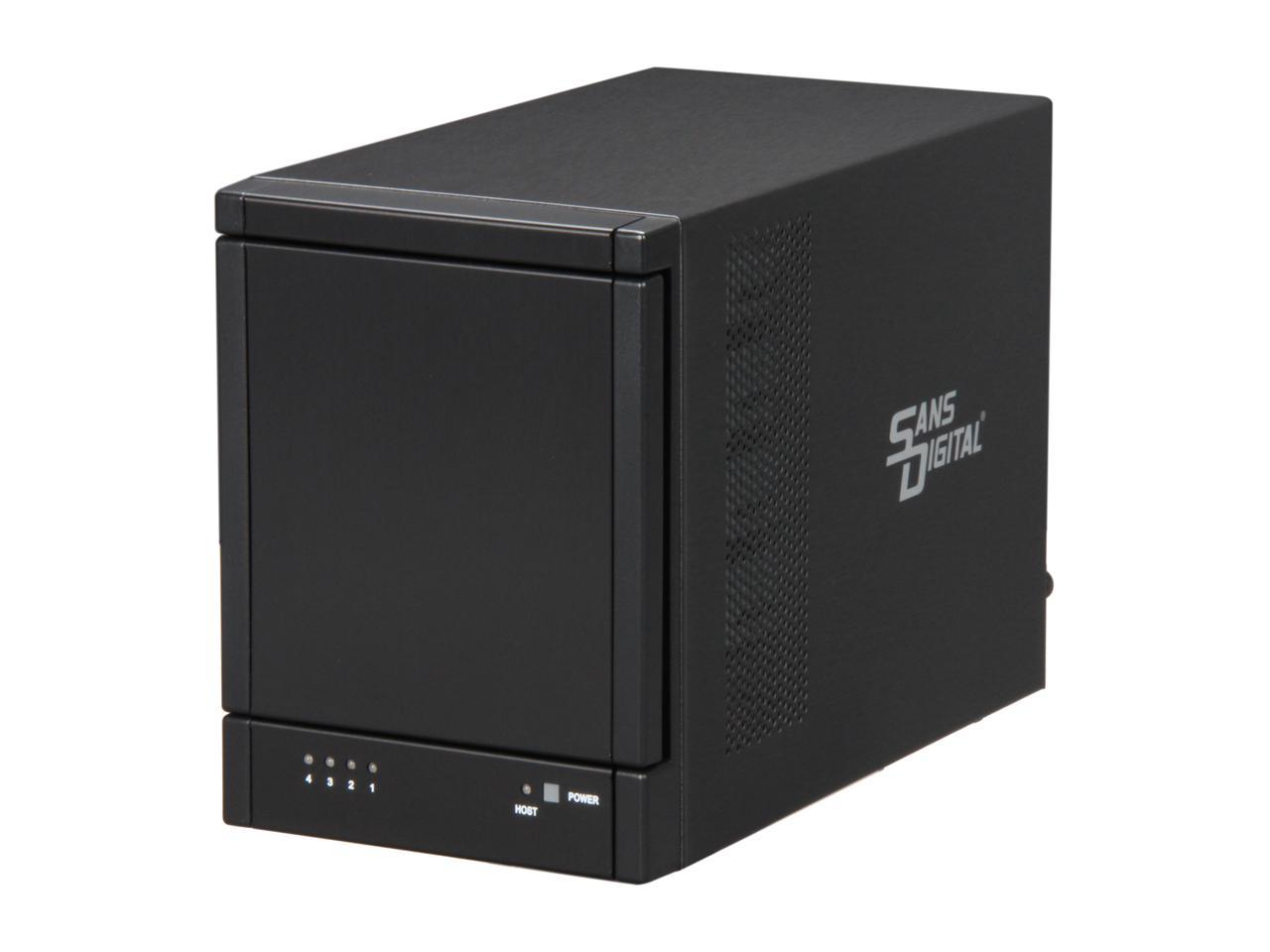 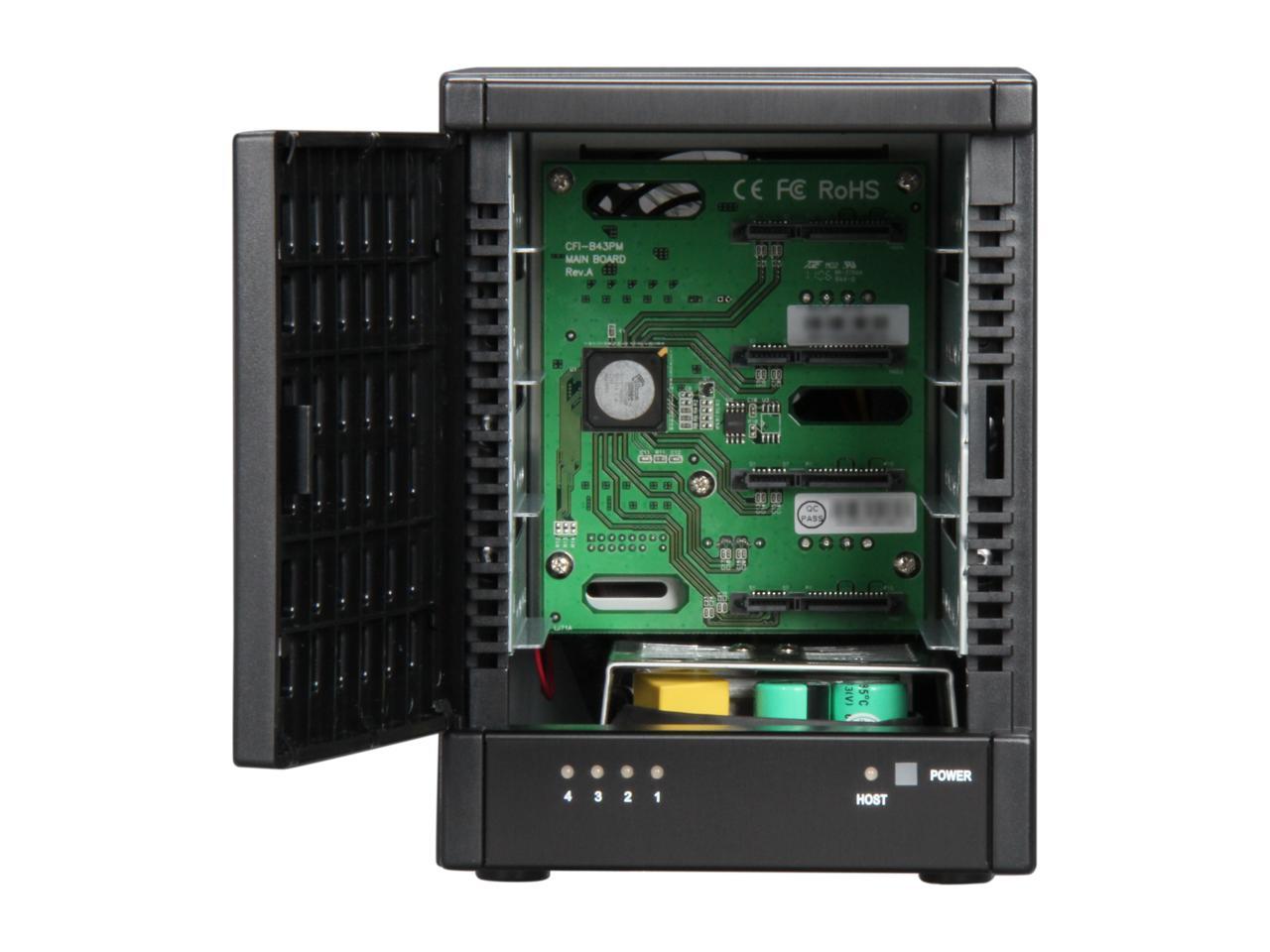 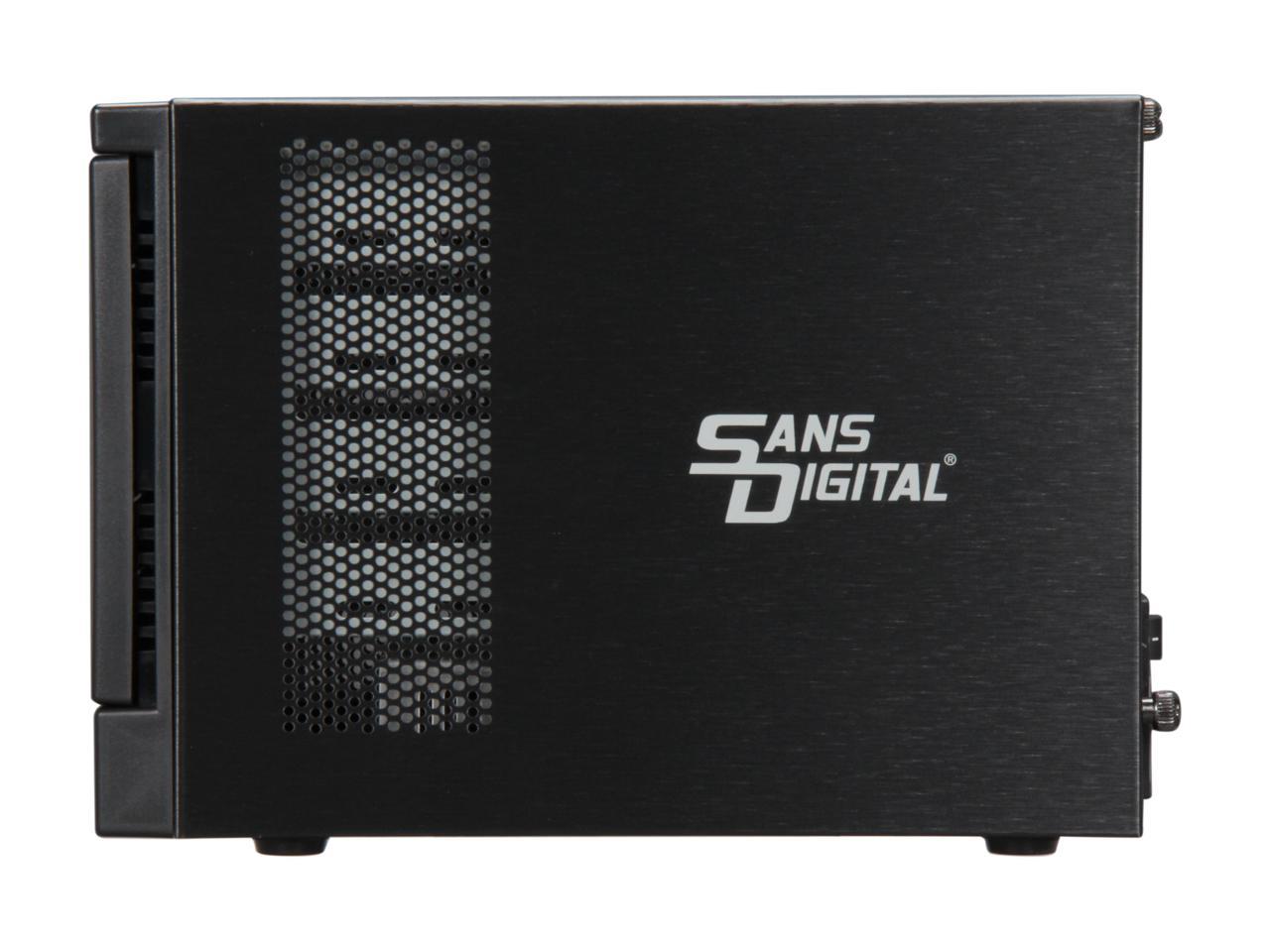 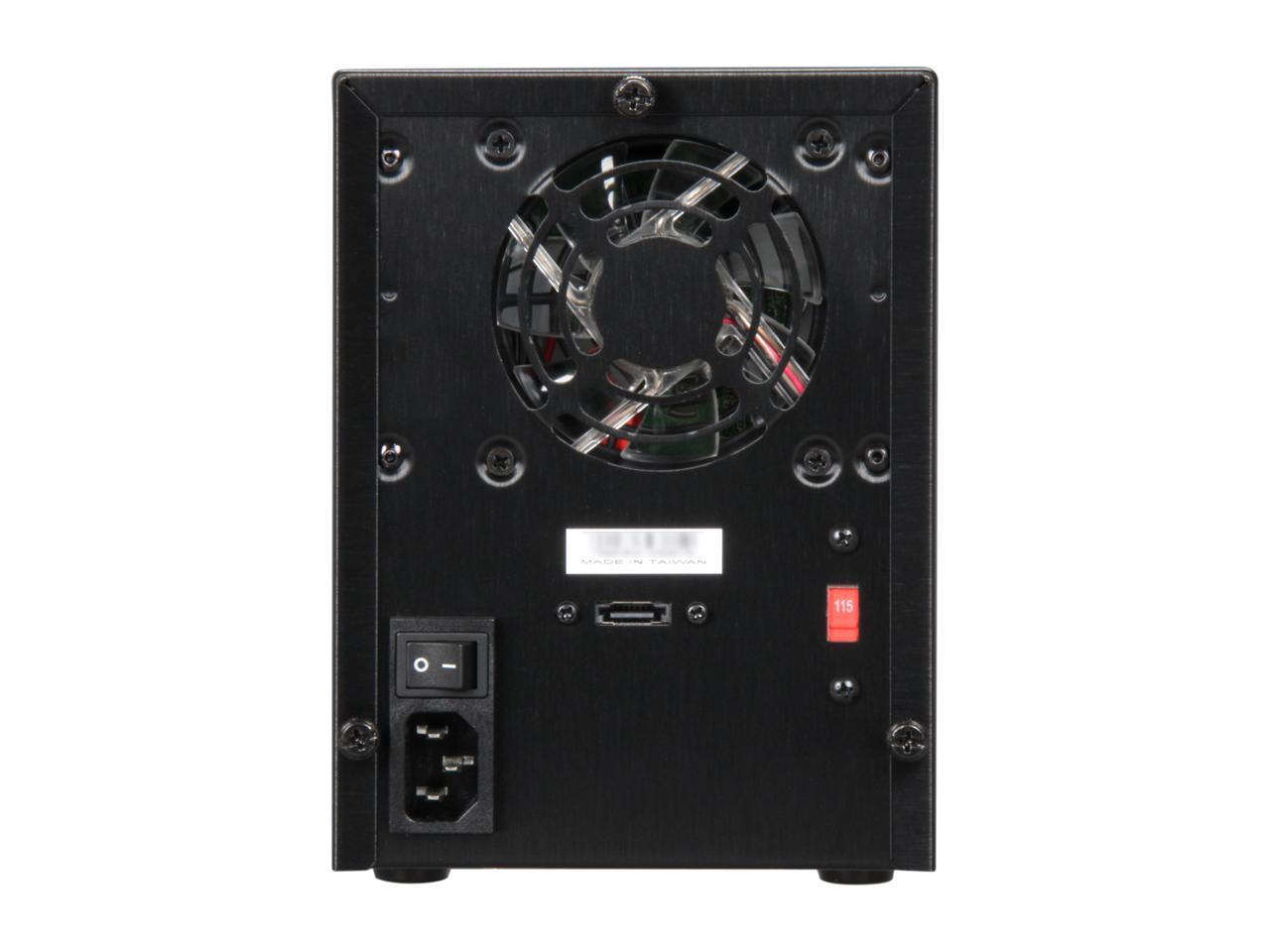 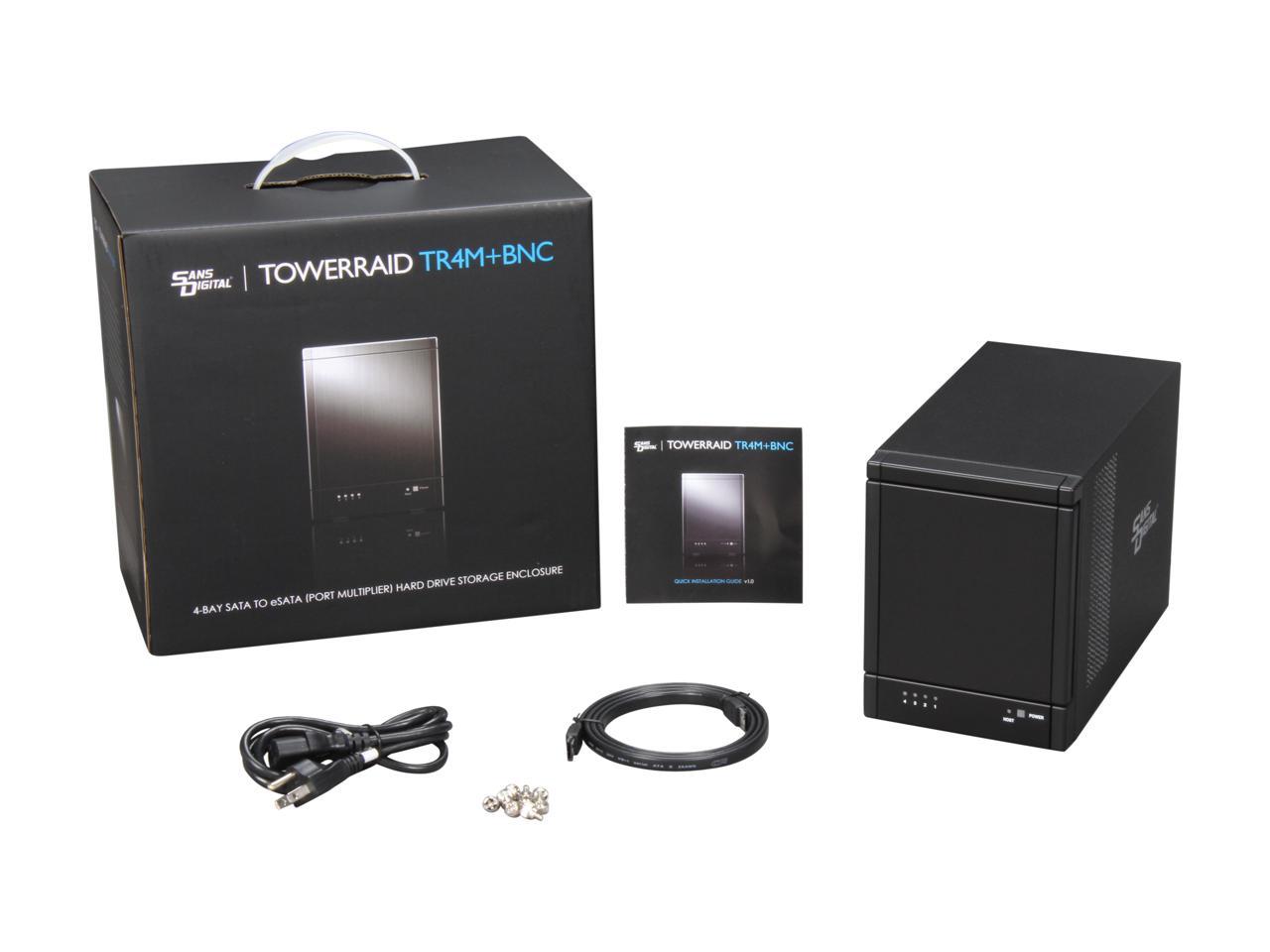 (146) Write a Review
OUT OF STOCK.
Overview
Specs
Reviews Pros: I bought this to add storage to my HP EX-470 MediaSmart Server. It's a nice looking case, and it works perfectly with my MSS. It's small, and it does what it's suppose to. I also like the fact that the power supply is in the box and not supplied with a wall-wart.

Cons: Blue LED fan is annoying, and the case was hard to get apart for the first time. I'm still giving the unit 5 eggs because it's well-built and I got it on sale for 69.99 / free ship.

Overall Review: Sans Digital: almost EVERYONE seems to hate the Blue LED fan light including me. You have a good product that does not need the *bling*. You should quit equipping these units with that annoying fan!

Pros: Enclosure is well made and efficiently designed. My Case was on tight and took 30 minutes to gently pry open (slight adjustments to case tabs fixed.

Overall Review: Port Multiplier tech is on Adapter side (in the computer) If only drive 1 shows up, then the drivers are not installed/updated or HBA controller does not support Port Multiplier. If drives dissapear after a few hours of use, or lack of use, it's windows power management. Disable Harrdrive powerdown.

Pros: The unit worked out of the box. It is reasonably quiet. In my system is does hot swap.

Cons: You need to removed the casing to actually be able to swap the drives. Getting the middle drives out is still difficult. Could really use some sort of drive puller or ejector. It seems to be picky on which order the drives are populated.

Overall Review: I am very good about sending rebates in correctly. I had never missed a rebate that I sent in on time, even got a late one years ago. I bought this last black friday and sent the rebate in less than two weeks later. It is now late April and I have not seen it. Usually people cry about rebates and I do not worry much about it. I figure they are mad because they did not send it in time. I did send on time and included all needed information. Sounds like sans digital is running a scam. I honestly only bought it because of the price after rebate. I hope there eventually is a class action suit about this.

5 out of 5 people found this review helpful. Did you?
Manufacturer Response:
Thank you for choosing Sans Digital products. Sorry to hear that you have not received your rebate. Please contact us at info@sansdigital.com for rebate status. Please provide the rebate number and contact information so we can check on the status of your rebate.
donald s.
Ownership: more than 1 year
Verified Owner
Great use of port-multiplier abilities2/3/2013 1:42:46 PM

Pros: When your host system has SATA port multiplier support, this thing just works (moreso with linux and libata with modern kernel builds than with windows). You get instant storage expansion without the need to fit more disks inside a PC case at SATA interconnect speeds. I've been able to carry a single md raid array across multiple systems without the need of using a screwdriver and without any loss of data using this enclosure.

Cons: Depending on the host system's hardware and software this thing can be finickey. It seems that certain combinations of sata devices on the motherboard coupled with bios settings AND the specific ordering of drives in the enclosure can raise some bugs which may make it appear one drive in the enclosure is not working, so with respect to ease of use, your milage may varry.

Overall Review: Until I used this on Ubuntu 12.10 I had zero problems and was amazed how well it "just worked". I started running in to some issues where I thought I might have a bad drive because although AHIC BIOS detected all drives, the initramfs environment would always get hung up on one of the drives and there would be one drive missing from the /dev file system. If I watched the LED's on the front of the enclosure I could figure out which drive seemed to be having trouble by observing the blink patterns. Moving "problem" the drive around to different slots would result in the failure following to the slot the drive was put in. Bad drive, right? When I tried this "problem drive" in slot 4, no problem! I totally blame the default kernel configuration in Ubuntu 12.10 for this problem but I haven't spent any time doing kernel debugging to say exactly what the issue is. My expectation is that therer will be a kernel update which, after I apply it, the issue goes away... until some future kernel update has a regression to this issue again :D Finaly thought: my experience is exactly why the LTS Ubuntu versions exist (and Debian stable, for that matter)

Pros: This is a great little enclosure. It works well when paired with aa Asmedia asm1061 FIS based port multiplier eSATA card. The SIIG SC-SAOM11-S1 work great in NAS4Free with this. Works will in Windows 7; took ~15 hours to initialize 8TB Raid 5 Array. Case is easy to open, thumb screws did require a screw driver initially; not a big deal.

Cons: Power supply is not modular. Will require repair if it fails.

Overall Review: I previously used this with a Marvel based eSATA III chipset, and it worked but would occasionally through I/O timeouts in FreeBSD; I don't think it was the enclosure, no the Marvel card; but FreeBSD drivers. Worked fine under windows when creating a Raid 5 Array. Too many self proclaimed Tech 5 know it all's on here have absolutely no clue about computer components, or do not do proper homework on what will work and how will it work.

Cons: As the title says. I installed with the RocketRaid 622 controller into my Windows 8 system to use as a member of a large storage space. Everything went well for the first hour or so, then the unit disconnected (all drives lost) and one of the four drive healthy lights went out. After discussing with the manufacturer I was advised to return it - it was indicative of a backplane fault. (Newegg's RMA process is so great!) My second unit failed within 4 hours with the same condition (different channel). I am not prepared to go for a third (it costs $12 to return each failed device). Looking at comments prior to purchase I saw some questions on reliability. I thought I would be OK, often people have problems because of misconfiguration of drivers etc. which I am competent enough to solve, but it looks like the overall manufacturing quality, and/or design, of this unit is flawed. I will look for a different manufacturer. As an aside, the eSATA controller worked like a charm out of the box.

Overall Review: Newegg should review carrying this device as a product based on the RMAs.

4 out of 4 people found this review helpful. Did you?
Manufacturer Response:
Thank you for purchasing Sans Digital products. It seems like it's a drop drives issues during file transfer. Usually this kind of problem could be taken cared by some special driver updates or hardware updates. If you still want to get this to work, I suggest contacting us by calling 1-800-980-1988 for technical support and our engineer will try to resolve it over the phone. You can also contact us at tech@sansdigital.com for email support.
Yuri F.
Ownership: more than 1 year
Verified Owner
Great price but horribly unreliable10/29/2012 10:28:12 AM

Pros: One of the cheapest esata enclosures you'll find, great when it actually works.

Cons: Look through the reviews and you'll find that these units have a very poor power supply that causes drives to intermittently drop. It's unfortunate because everything else about this product is great. I already had this RMA'd within the 1 year MFG warranty (had to pay $30 out of pocket for shipping) and the new one is still having the same problems. I would not recommend this to friends because of it's reliability issues.

4 out of 4 people found this review helpful. Did you?
Manufacturer Response:
Thank you for purchasing our product. If you have the same issues with the replacement unit, it is more than likely that your problem is not properly diagnose. It could be different parts causing the issues, such as HDD, power source, cables or host connection. Please contact us by calling 1-800-980-1988 for technical support and our engineer will try to resolve it over the phone. You can also contact us at tech@sansdigital or visit our online forum.
Noah E.
Ownership: less than 1 day
Verified Owner
Works with ASUS TS-Mini Windows Home Server2/1/2012 4:29:02 PM

Pros: ASUS TS-Mini has 2 eSATA ports, and supports port multiplication, but only the older Command-Based Switching (CBS) protocol, not the new Frame Information Structure (FIS) protocol. Took a chance, ordered one, put three random drives in it, and it was recognized on either eSATA port of the ASUS TS-Mini. So I filled it with 2TB WD Green drives (4K sector, but jumpered) and it's working great! If you have an ASUS TS-MINI, but this one. The eSATA port supports only 4 devices per port. Don't buy the 5-bay one. The 8 bay one should be fine, and uses both ports. This 4-bay one is similar in size to the TS-Mini.

Cons: Ugly blue fan? Not a pretty enclosure? I don't care, all of this networking junk sits on a shelf in my basement. Other reports of possibly unreliable power supply. Hope not. Mine is plugged into a UPS/surge protector. I'll probably end up buying another one for future expansion just so I have it.

Overall Review: A cheap box to put HDD's in. Performance is way better than plugging in a bunch of USB HDD's.