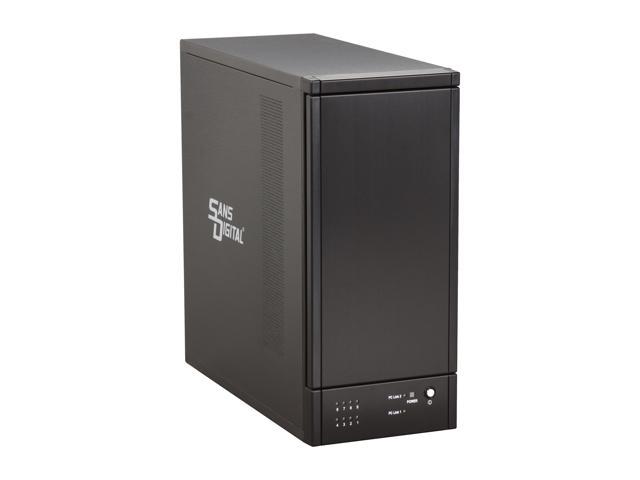 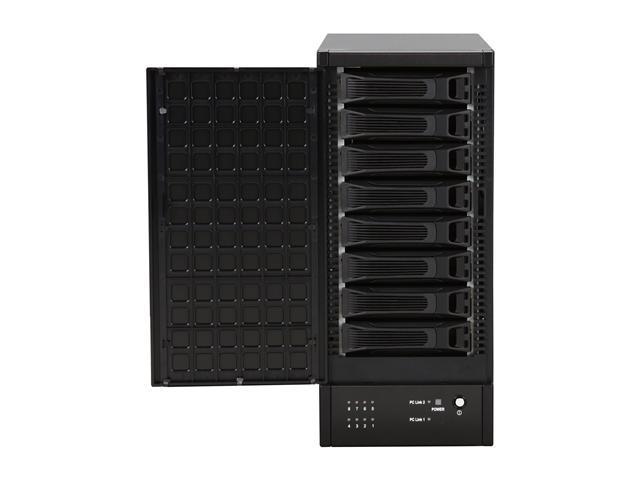 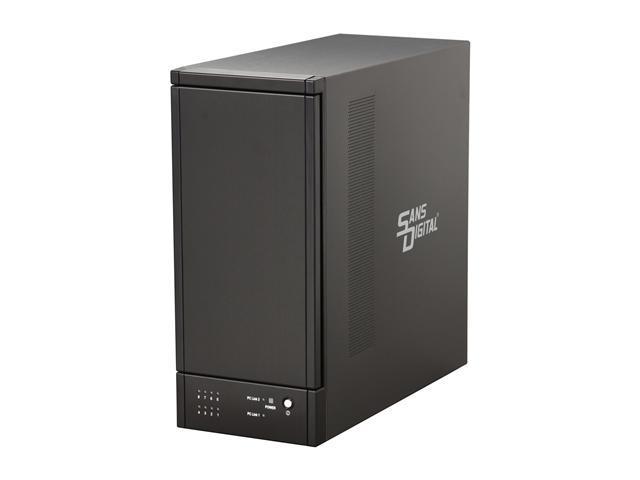 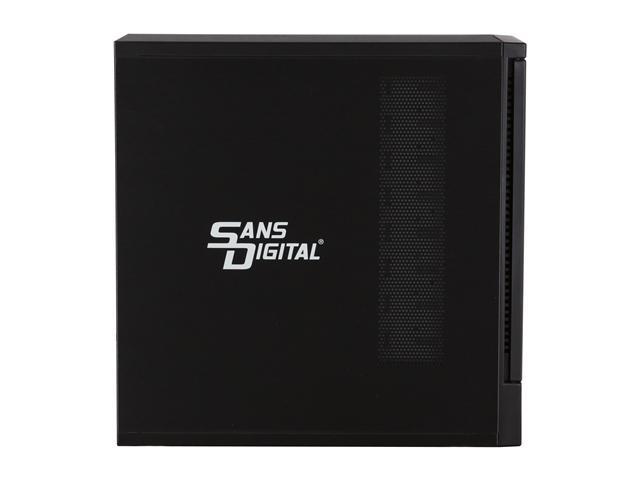 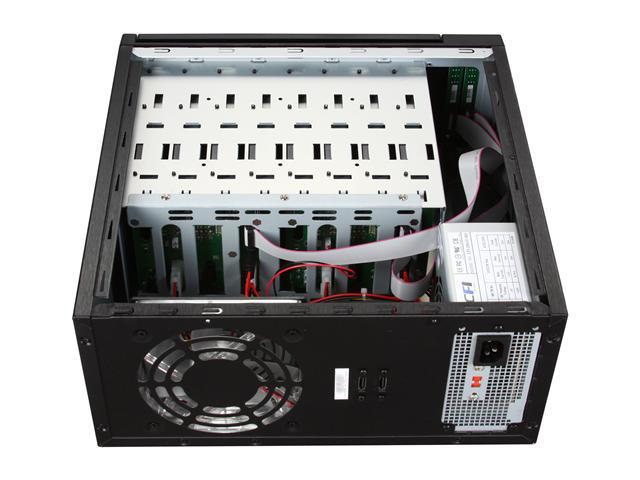 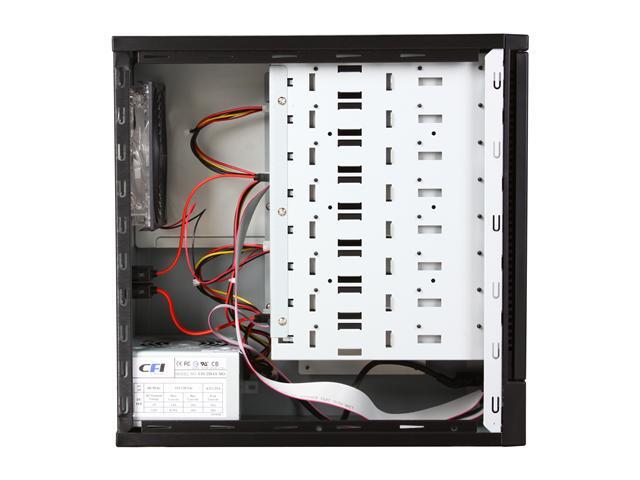 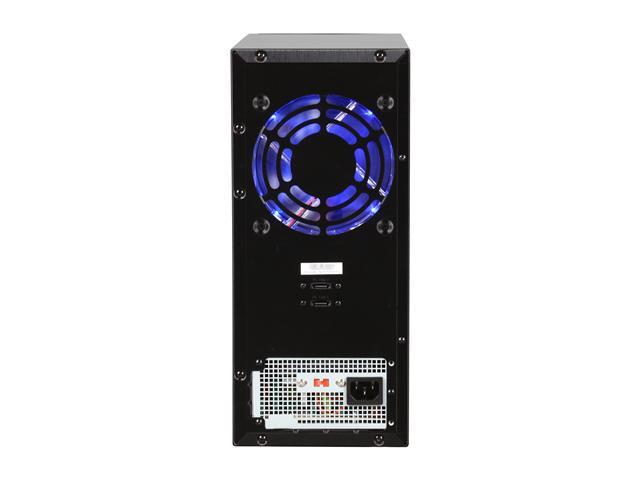 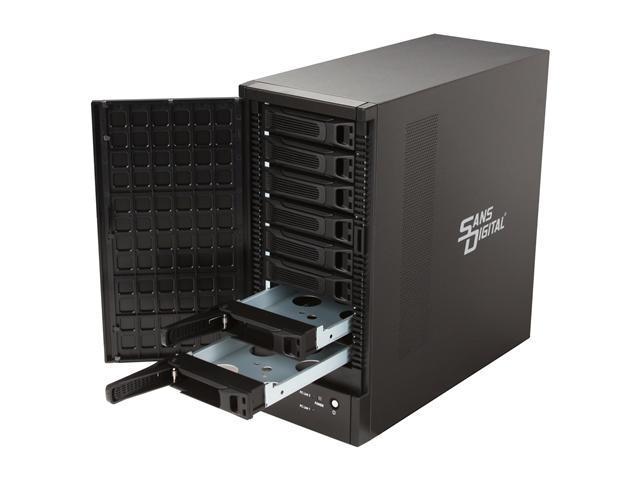 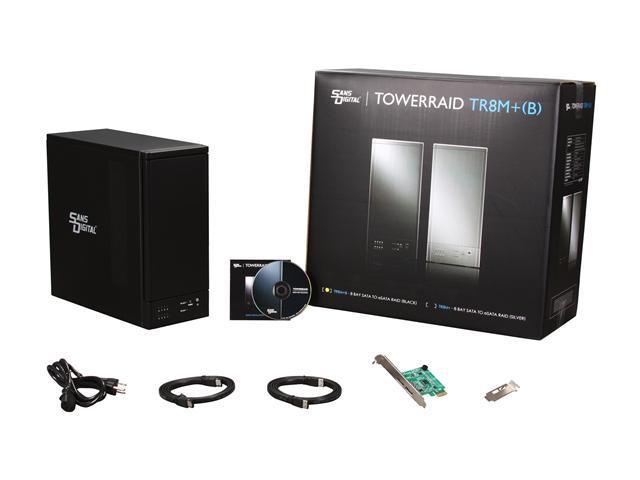 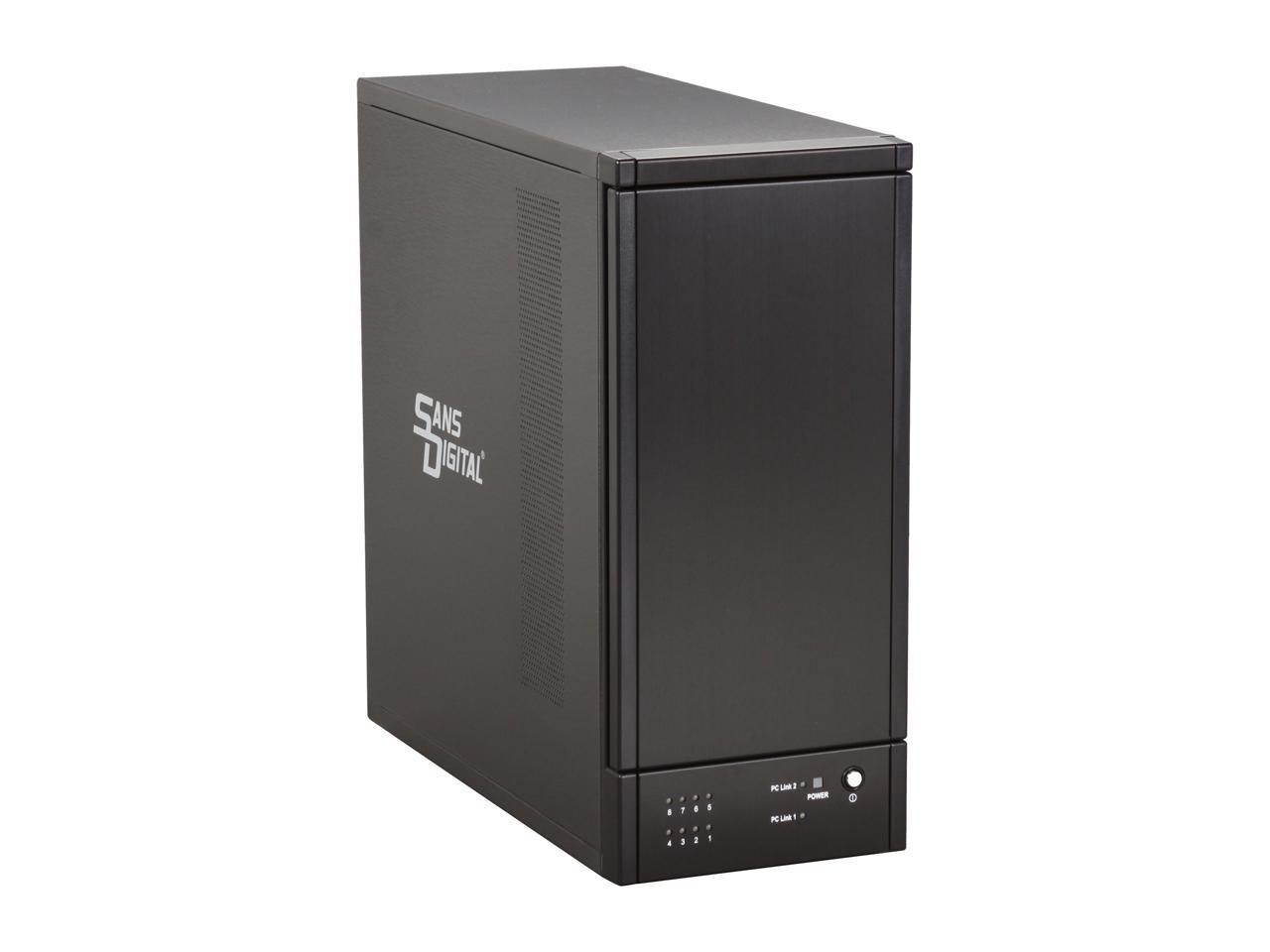 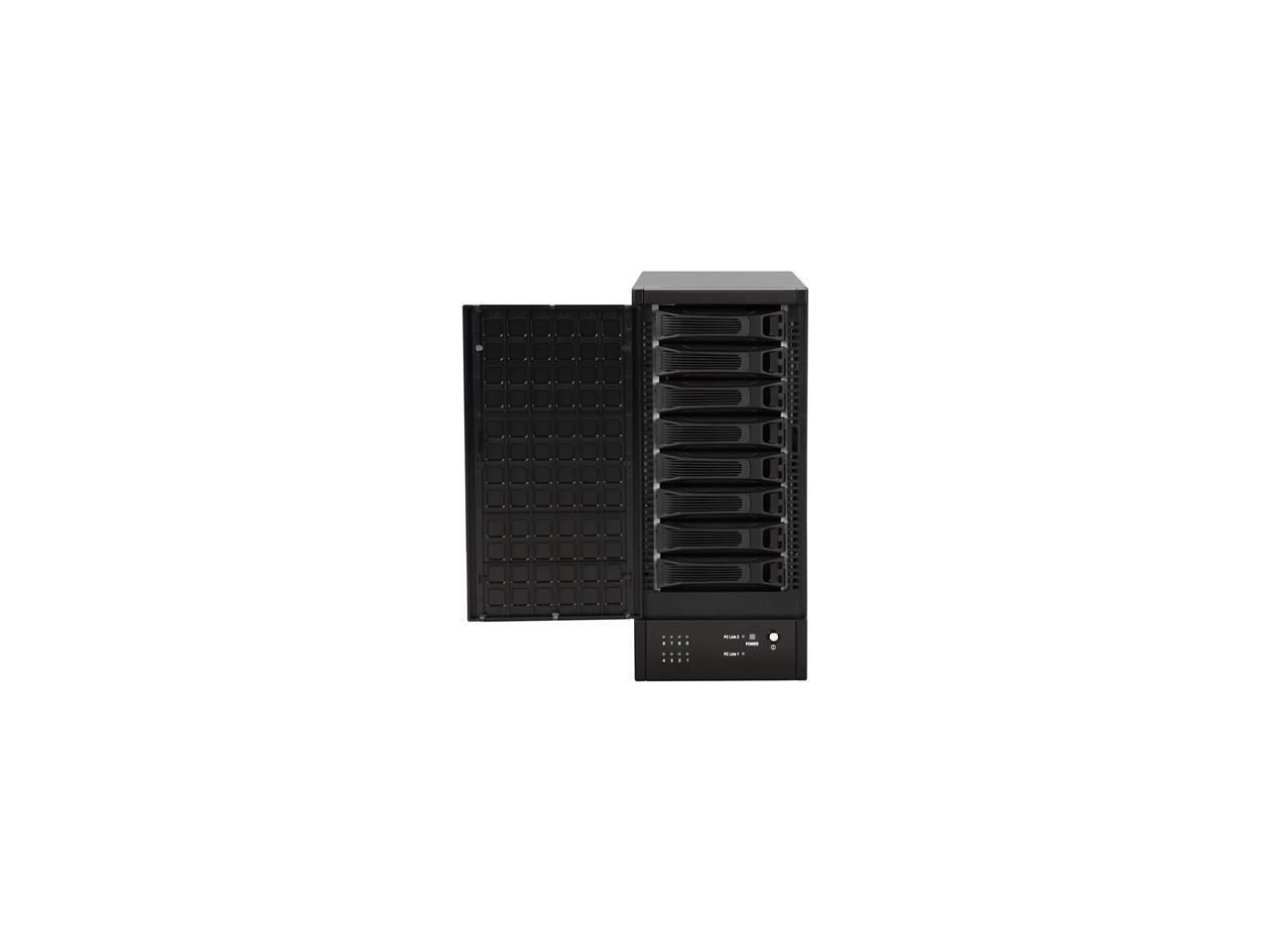 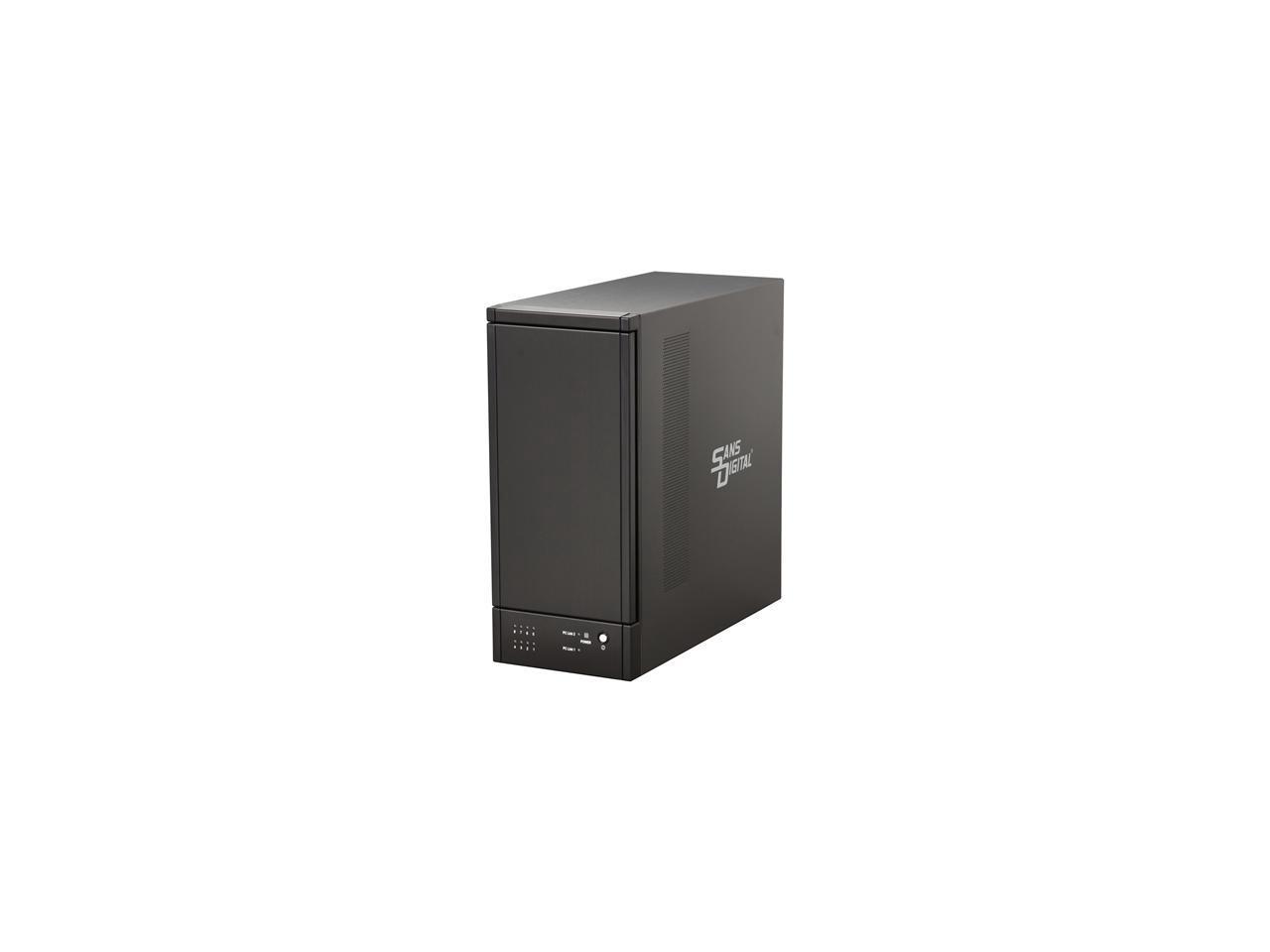 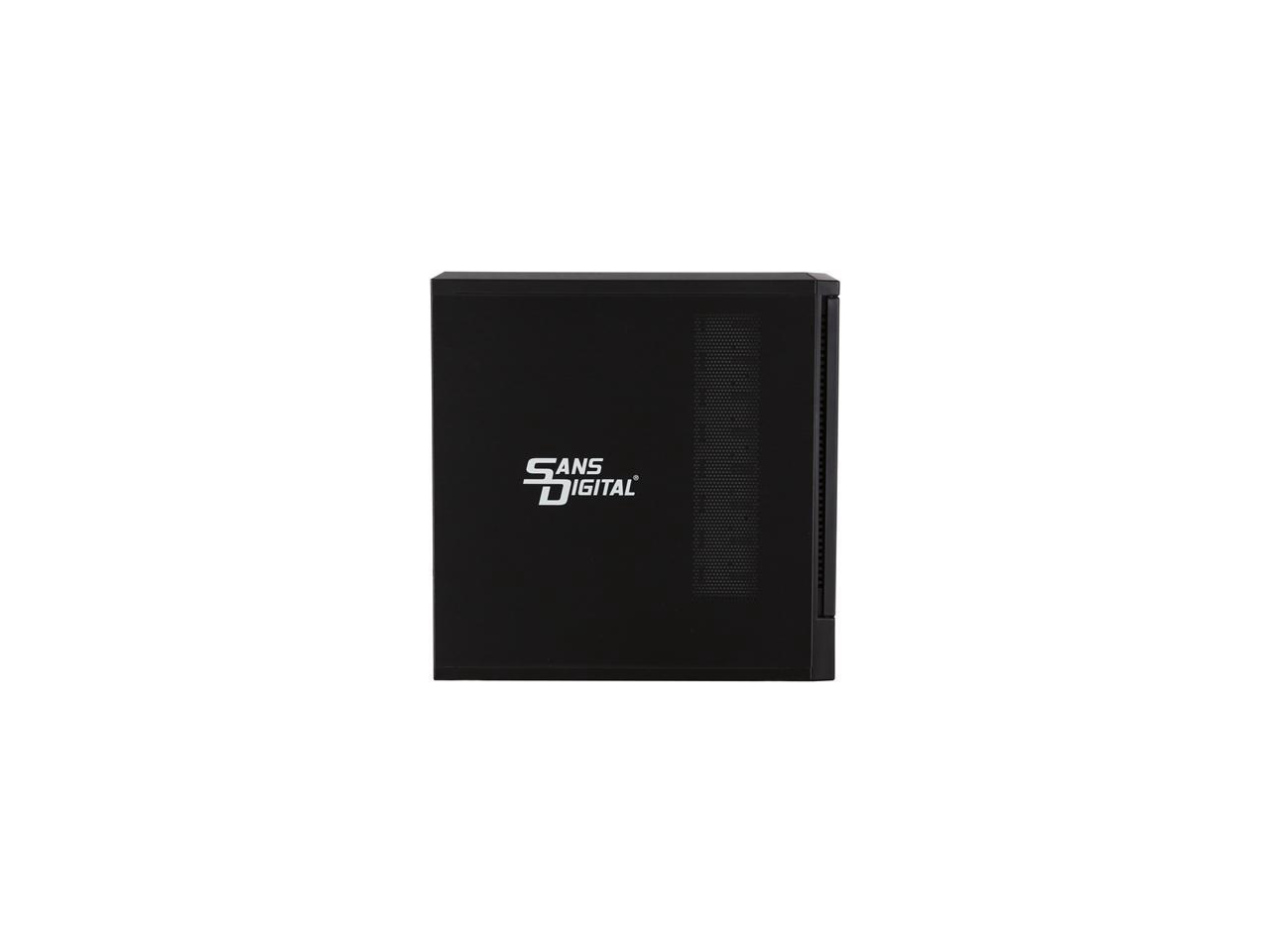 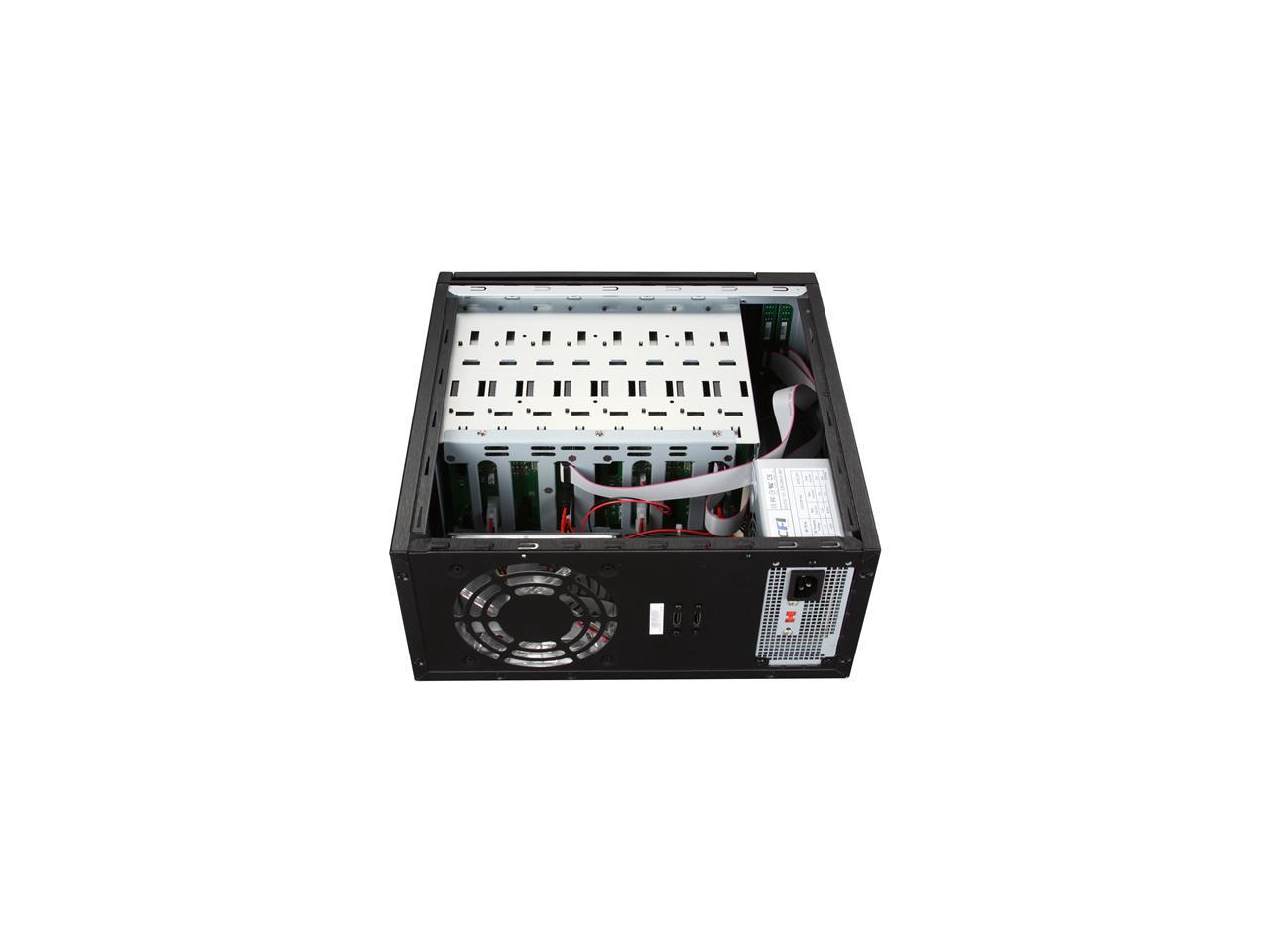 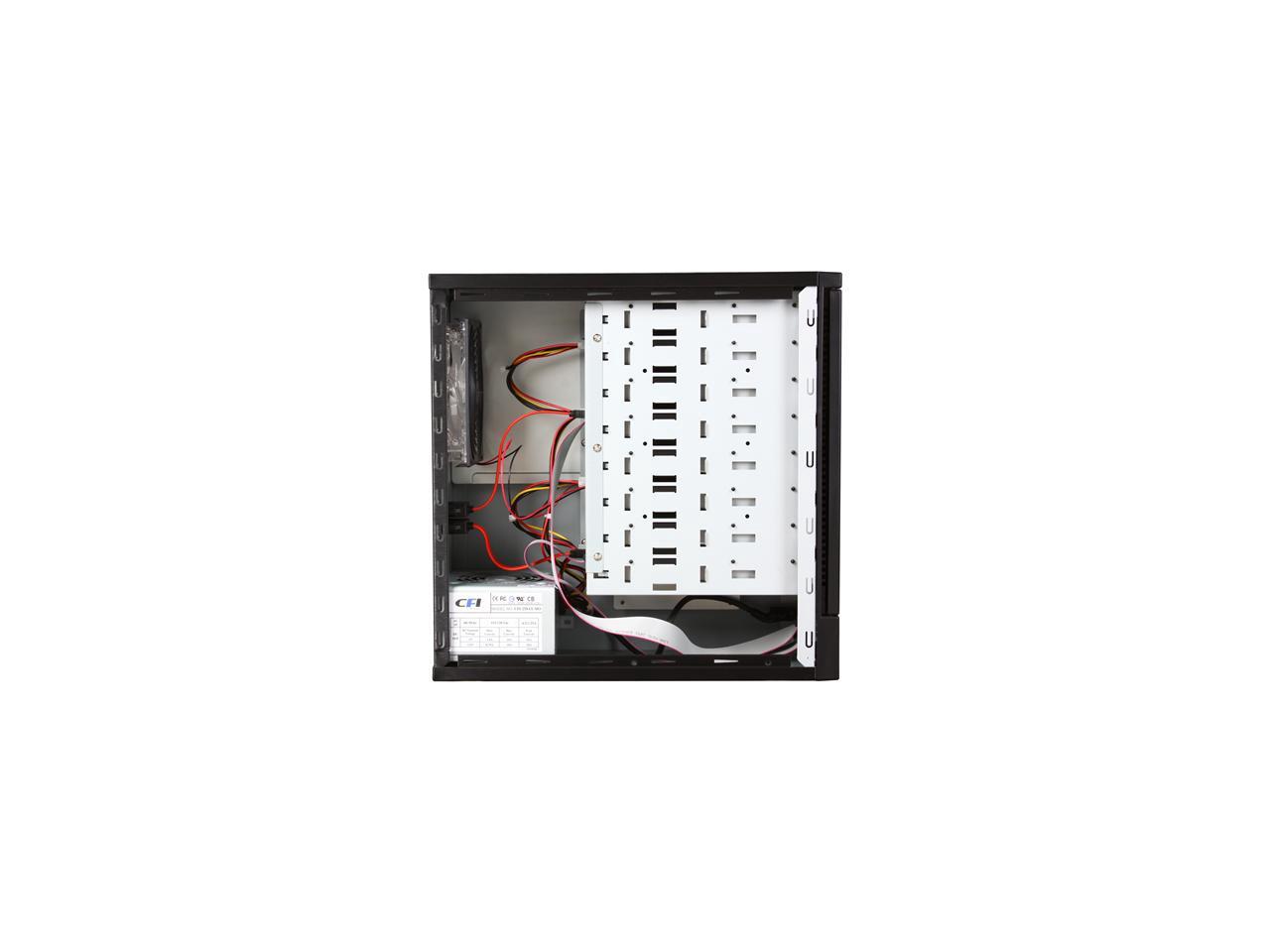 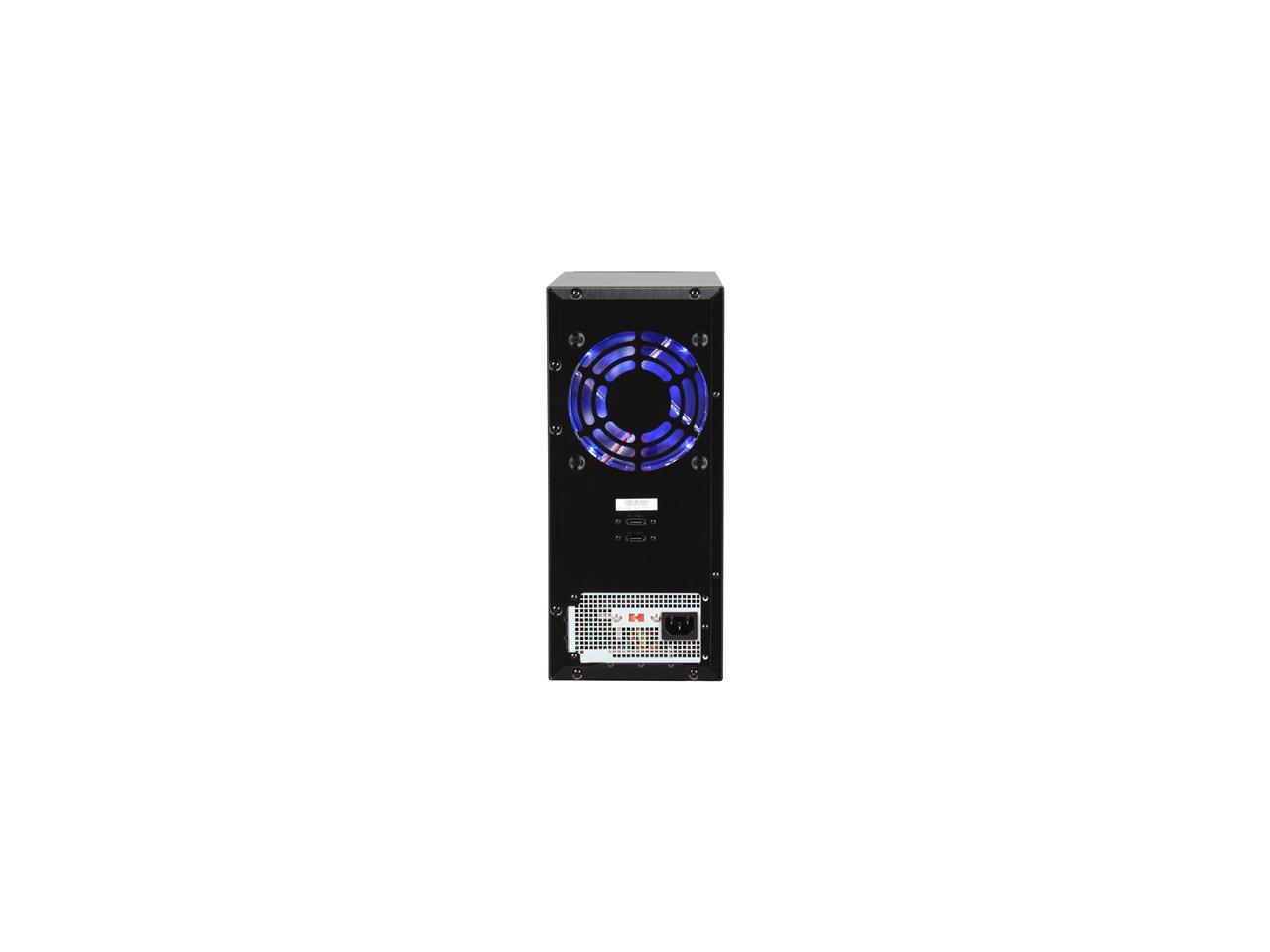 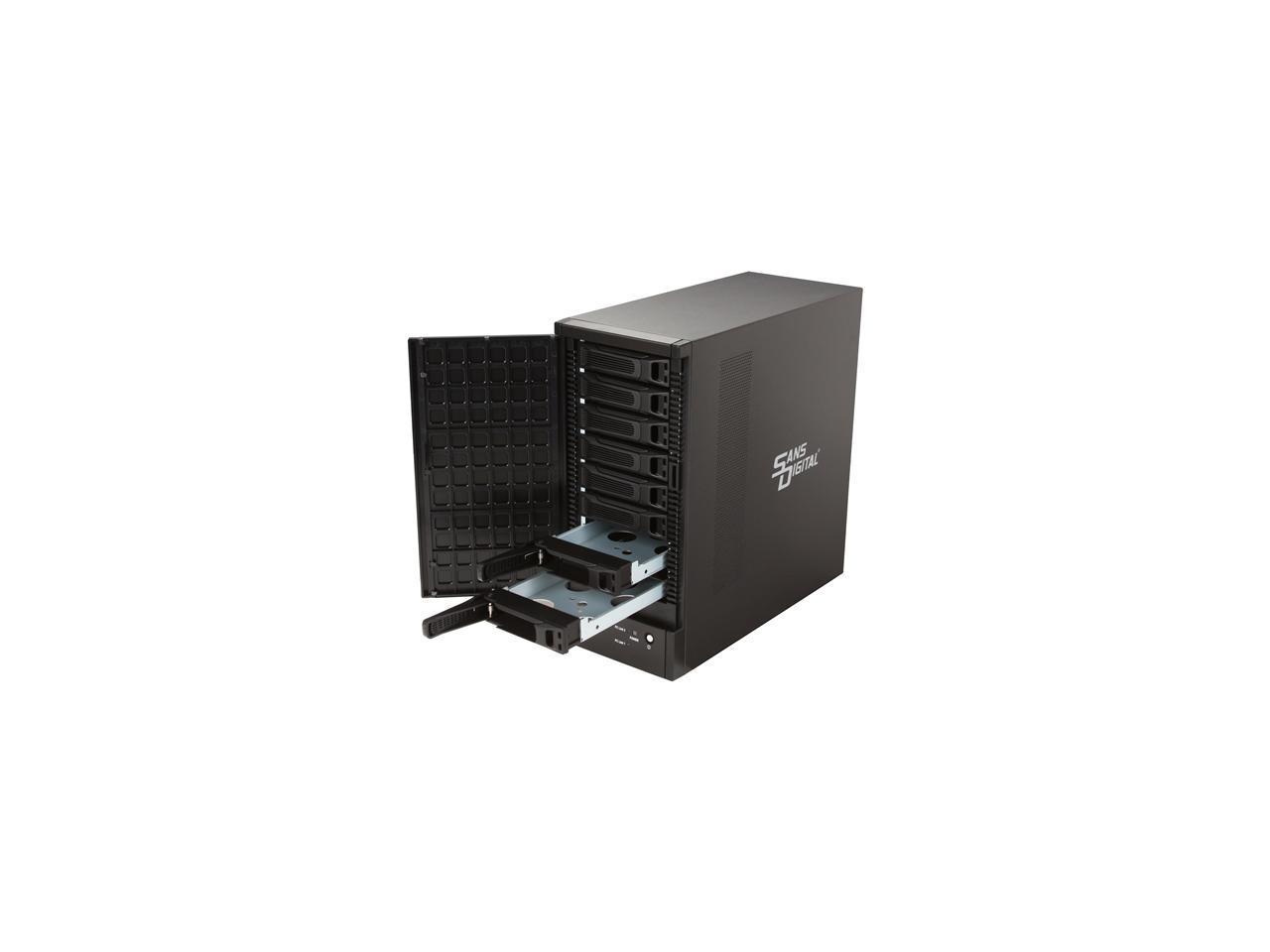 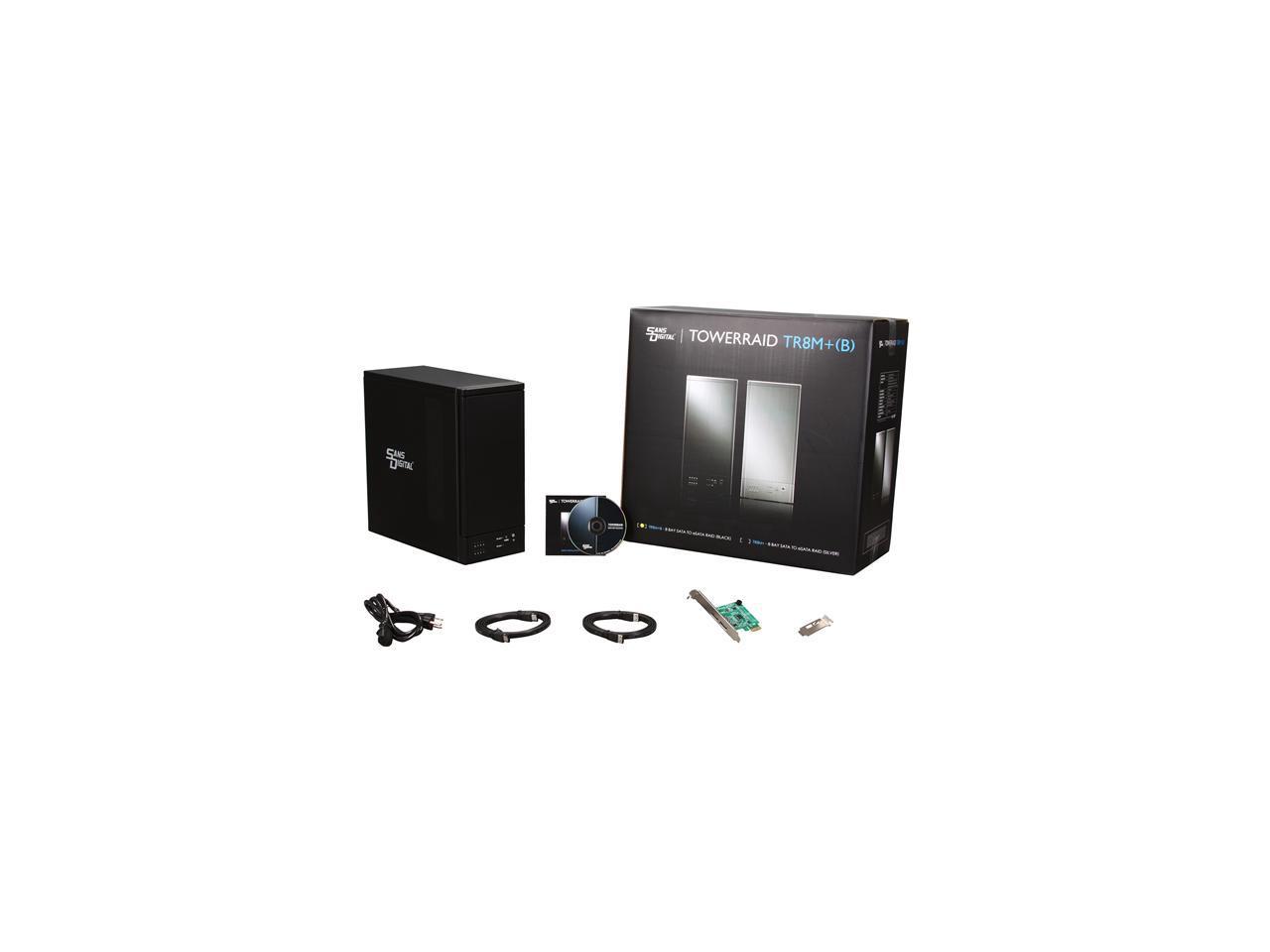 The TowerRAID TR8M+B is a compact RAID tower utilizing the latest SATA port multiplier feature, where one single eSATA cable connects to eight SATA hard drives. Bundled with a high-performance PCIe 2.0 x1 RAID controller card RR622, its RAID 5 performance is capable of reaching over 250MBps. Online expansion is a feature included in the controller card so that RAID could be expanded without the need to recreate the storage space or erase the existing data. Advanced monitoring functions include real time hard drives health status and e-mail notification for critical events.

Designed with easy installation in mind, the TR8M+B is designed with eight hot-swappable tray modules so that hard drives could be removed and installed with ease. The included dual-port eSATA 6Gbps PCIe 2.0 x1 RAID controller card allows the connection of eight hard drives using only two cables, while all drives could be configured into single or multiple RAID arrays, providing over 200Mbps in performance. Cons: The fan went out in about 6 months, had to replace it. The front cover blocks the air flow. Wound up removing the cover and it dropped the drive temp by 30 Deg.

Overall Review: Would have been better if they left the screen on the front cover. A better fan would be nice considering the money that I paid for the enclosure.

Overall Review: I bought the unit with a future pair in mind (still the plan). I've done RAID in various implementations; to many issues and points of failure. So, I decided to go old school; complete redundant hardware /w replication software (Individual JBOD disks syncronized to a second unit - complete fault-tolerance). This allowed me to go from WD Black to Green (Black is the only way to go with an "all eggs in one basket" approarch). Anyways, once I figured out the drives have to been initialized first then full disk encrypted (TrueCrypt) my disks now show up. BIG PROBLEM: Cooling - The unit is so compact, has a faily quiet and low CFM fan, and the sleek door really impact its ability to move air. "Heat is the silent killer!" I agree with other posts here that you need to do somthing or drive will die unless your unit is sitting in a 65 degree room. I'm going with a high CFM fan in the back even though another low unit in the front would be best (keeping the sleek).

Pros: Excellent/AMAZING shipping protection! This thing was packed to withstand anything! Very attractive, nice mechanical design. Slide out trays work well. I put 8 Seagate 2TB Green drives in it and they all came up and worked as advertised. I am running each drive as a seperate JBOD unit. Cute little Controller card. Cosmic bi-color LED lightshow on the front panel! ;-)

Cons: I purchased this SAME unit, but was listed under a different heading on NewEgg. Other than that it is identical, right down to thee HiPoint RocketRaid 622 card. BTW the HiPoint website lists the RR622 as a SATA III solution so it should be capable of up to 6Gb/Sec xfer rates. But good luck finding SATA drives that can go this fast. I am running a STATE-OF-THE-ART ASUS MoBo with on board internal SATA III ports connected to three, 3 TB SATA III internal drives and the best they do is 104-110 Mb/Sec. I plan to buy another one and populate it with 3TB drives.

Overall Review: This was just the ticket for my new Media Center PC. It allows LOTS of storage while still giving me SATA II transfer speeds. Copyinng 1+ TeraByte chunks in JBOD mode gives speeds in excess of 110MB/Sec. VERY nice. :-)

Pros: Adds 8 drives to any PC with another PCI-Express 2.0 x1 Slot to spare.

Overall Review: When I first bought this I has the displeasure of a malfunctioning bottom multiplier board in the enclosure. It took me five months to have it replaced. I spent the first month in emails with a RMA agent who walked me through every test I had already performed and mentioned in my initial report before finally agreeing with me a solid month later. It took four months to arrive at my office. When I replaced the board the enclosure worked, but still had one issue that was related to the included card. During a large file transfer the multiplier board would do a re-sync every few minutes which would lock the computer up. I finally figured out that I needed the newer 1.3 drivers that were on the HighPoint website as the ones included on the CD were horrendously out of date. Once I had the drivers updated to 1.3 the enclosure worked fine. I did try using the included raid features but learned quite fast that it wasn't a good idea. Raid 0 overloads the card, Raid 5 shouldn't be attempted for any reason. The card and enclosure work best on Windows 7. Linus support isn't. The drivers aren't in the Linux distro and compiling them on anything newer then Debian 5 won't. Rewriting the drivers may work but due to DMCA the drivers have to be rewritten by the end user and the rewrite is a few hundred lines. Needless to say, I'm using this in Windows 7 x64. I hope newer drivers are written for Linux but I'm not holding my breath. All in all, a good purchase. I wish I had opted for one that had USB 3.0 so I could break away from the included card for a more universally accepted protocol.

Pros: has 8 bays and cheap when it works I've even gotten some really good transfer rates

Cons: constantly has Ultra DMA CRC Error counts, which eventually get bad enough where the channel is reset by the driver lights blink and it trys again eventually OS reports enough drives failed to where the whole array fails (some times works for a few weeks with no issues other times craps out in minutes or even at boot just constantly resets and my fileserver cant even get started). Ive tried 3 different eSATA cards with it the one it comes with RR622, HA-SAN-2ESPCIE2, and then i even spent the money on a HA-DAT-4ESPCIE also has the same old problems. been working with tech support for months with no resolution or even anything new to try. save you money any buy something that actually works this is too good to be true, and based on other reviews my experience is not unique although tech support would have you believe that is not the case.

Overall Review: I have my drives set up for JBOD on the card and I'm running CentOS 6 using MDADM to create a software raid 5 array that has one large EXT4 partition and using samba to share it out over a very small home network. tried hardware raid as well similar poor results. also one of the many hats I wear during the day is system administrator and i have other software and hardware raid arrays i have set up over the years with windows and Linux and even MDADM software raid that are working flawlessly and have been for many years so its not like I don't know what I'm doing.

Pros: 8 Bay Bundled Raid Card (Software) Superb Air Flow Long Life Well priced I've used this Tower for 4 years now and it has been a superb product. There are many negative reviews, but I have not had any significant issues. I use a raid 5 setup using all 8 bays. All of the drives are 2TB bargain specials which gives me 12 TB of usable space and a spare drive in case of failure. Now into year 4 the fans have been replaced as the power supply fan started to make noise and the other only made since while I was in there; the only time I was in there. The bundled card is not amazing, but its functional. It's only pci-e 2.0 x1 and that's not enough bandwidth for this tower. Pair that with the difficulties caused by software raid I can see why people trying to use this on a less robust system might have run into serious trouble. I went with the RR642; it's still software RAID, but the x4 bandwidth helps a lot.

Cons: None It does what supposed to do all day everyday for going on a half decade. Not USB 3.0 Compatible

Overall Review: I might suggest a USB 3 device to someone getting a hard disk tower today; but I have been superbly satisfied with this purchase

Cons: The included PCIe card is a significant detriment to the performance of my 4.8 GHz 6-core watercooled monstroscity of a computer. It locks up my computer for a few seconds of every minute after trying to write ANYTHING to it.

Overall Review: San Disk ought to ship this enclosure with one of their own cards. The included HPT RocketRaid 622 is a sad excuse for a raid controller. I'm excited to see if a "SANS DIGITAL HA-DAT-4ESPCIE" that I just ordered will allow me to push the envelope of my 8-bay raid box... BY WRITING TO IT

Cons: bought this on july and didn't function properly since. top 4 bays would fail constantly. every time when I'm about to access (read/write) one of the drives on top 4 bays, it crashes. it power cycles and tries to boot it back up, but doesn't detect top 4 drives afterwards. I thought ESATA cable was faulty since it does look cheap. order two extra ESATA cables but same problem. began to look at other parts for troubleshoot, naturally I assumed it was the RAID card that came with so I ordered different RAID controller but same problems. Then I suspected my HDD wasn't healthy. I have all WD from 1TB to 2TB making up total 11TB on it, so I began to run HDD check with WD diagnostic tools, all passed. Just in case, I rotated HDD around on different 8 bays on it. no matter what type of HDD I put on top 4 bays, it crashes. so that's that. I've concluded that tower is having trouble so I RMA'ed the thing. When I received the 2nd times, it was having a same problem. always that top 4 bays. I've tried with 3 different workstations from WHS 2003 to windows 7, and 8 environment.

Overall Review: Tech support and RMA department representatives are superb. very quality service and knowledgeable. too bad they have to suffer on poor devices. very disappointed on Sans Digital..

Manufacturer Response:
Thank you for purchasing our Sans Digital product. We thoroughly test all RMA replacement units before shipping it out. Because you are experiencing the same issue with two different units, please help to contact our Tech Support for assistance on your unit. For immediate support, call 1-800-980-1988 to get in touch with one of our Technical Engineers who will assist you with troubleshooting the cause of the issue, or email us at tech@sansdigital.com.