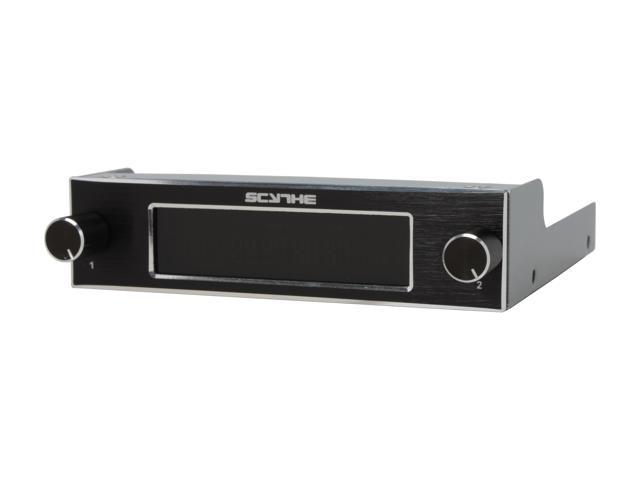 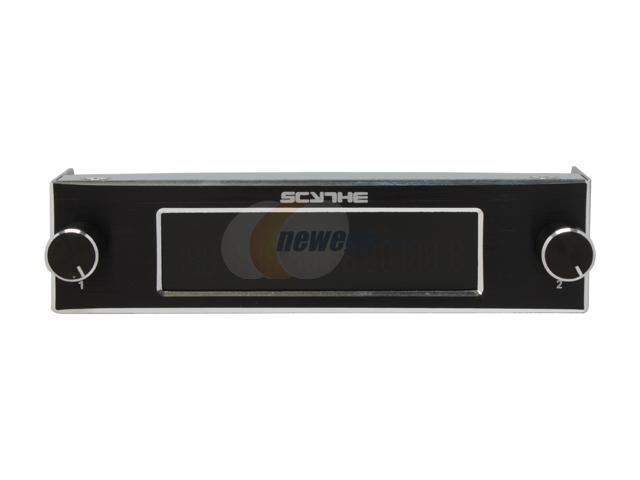 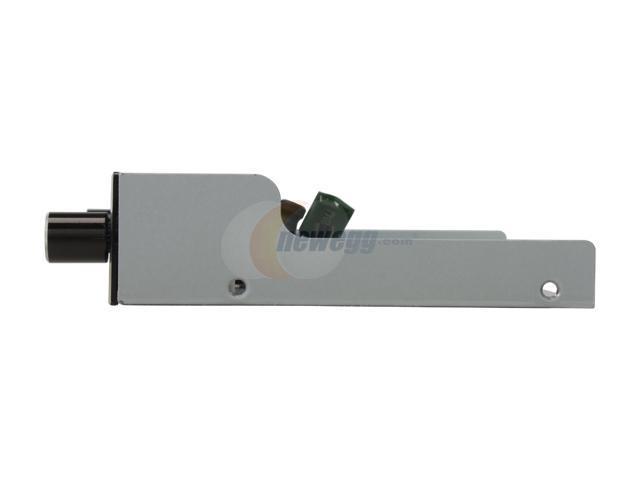 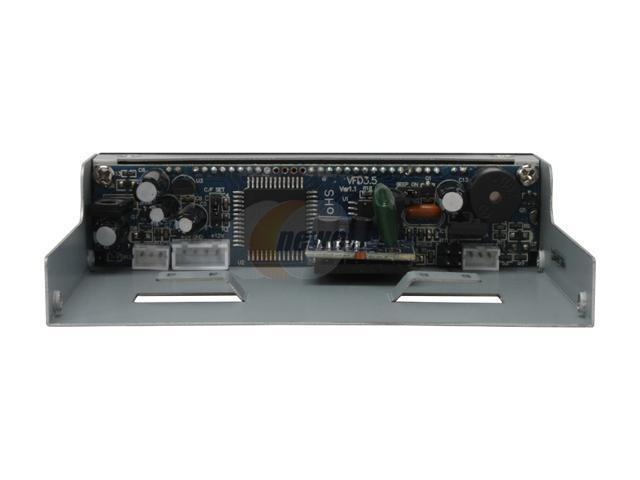 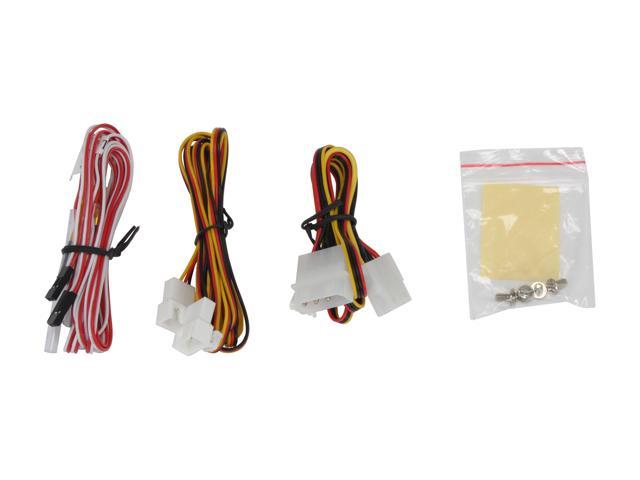 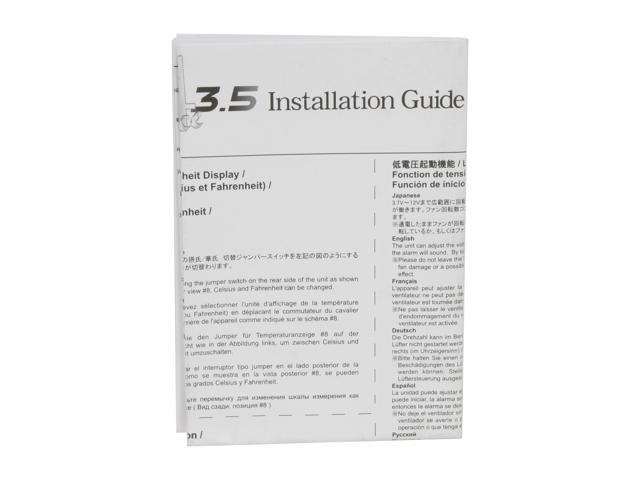 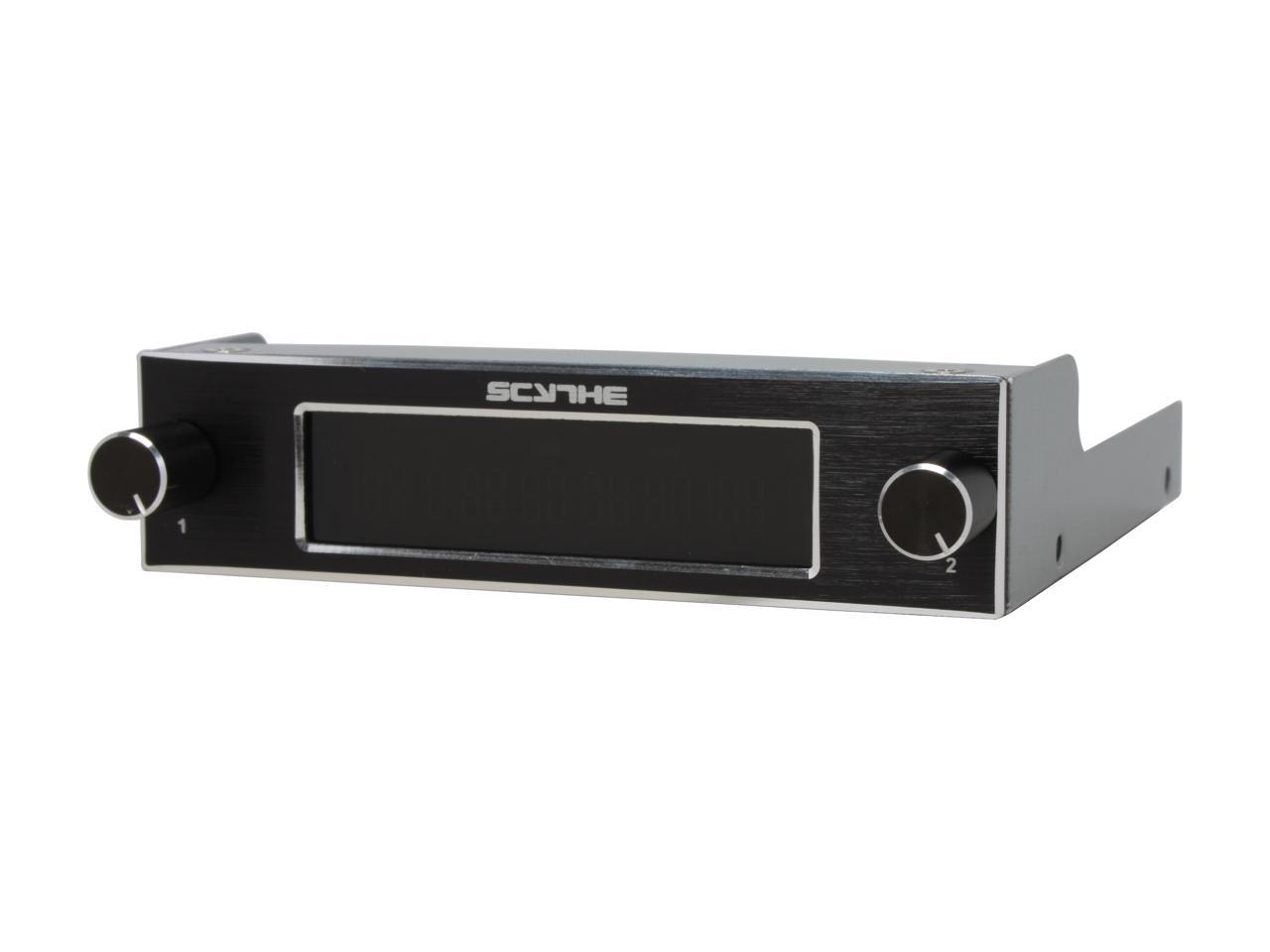 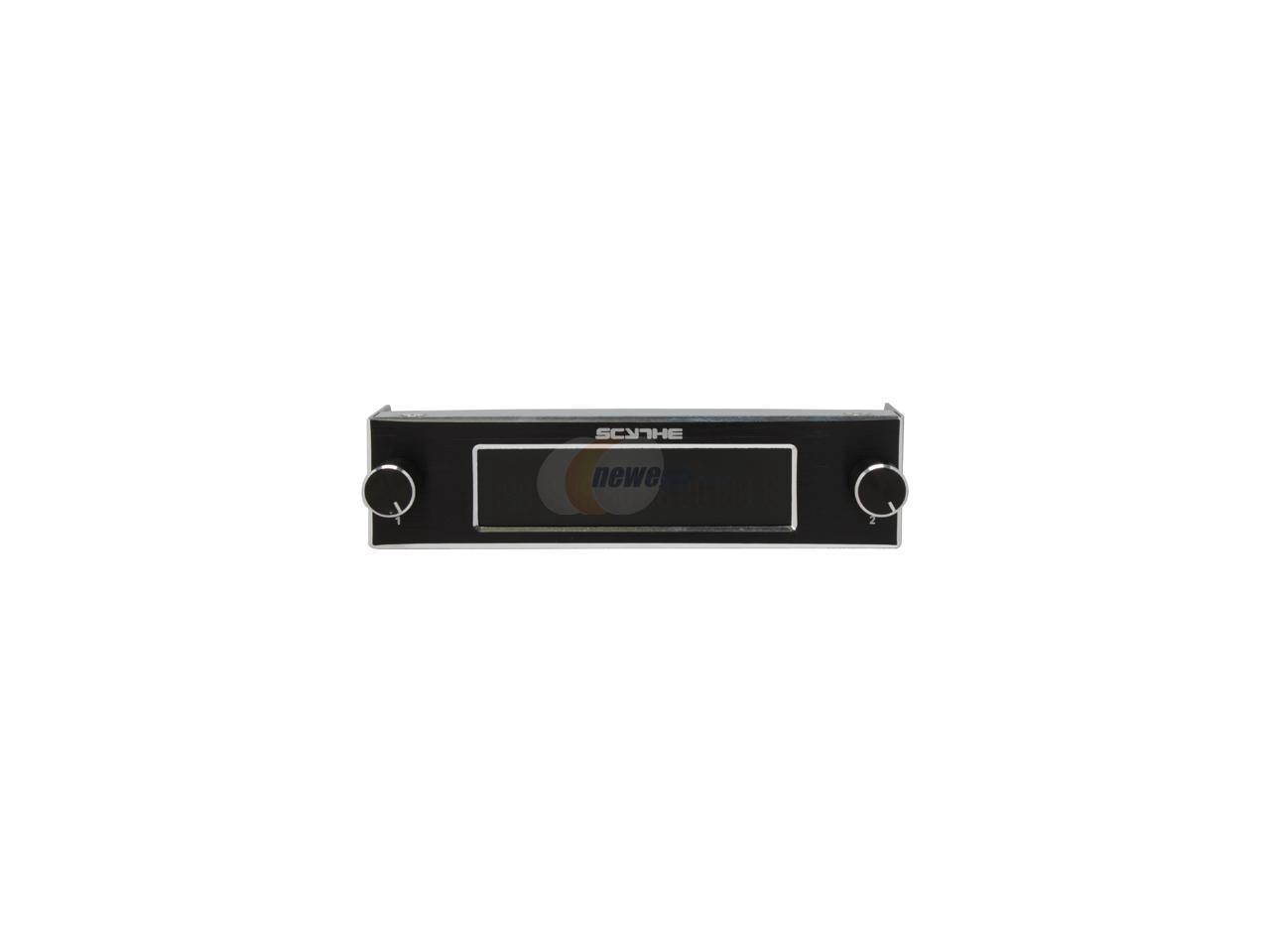 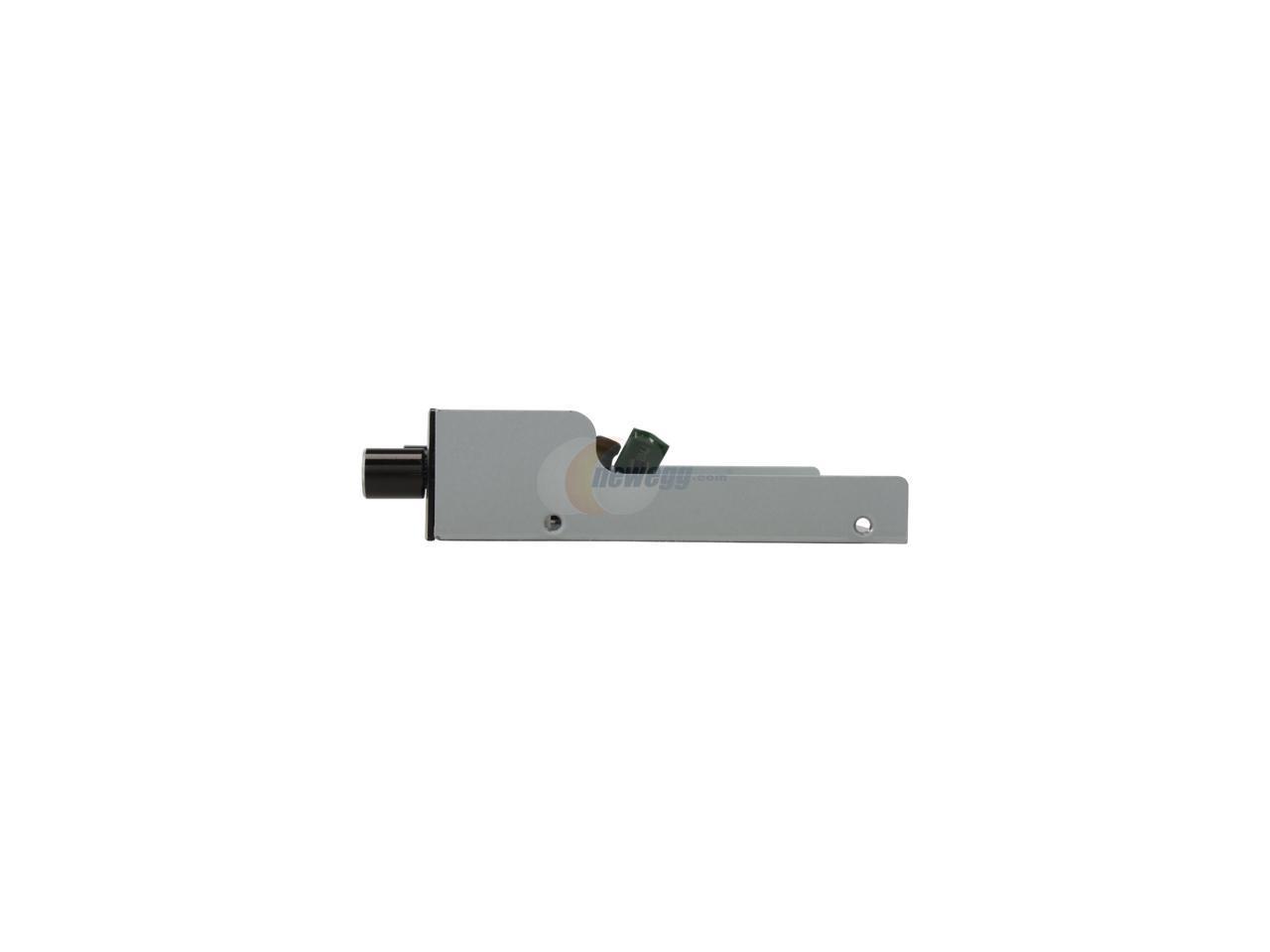 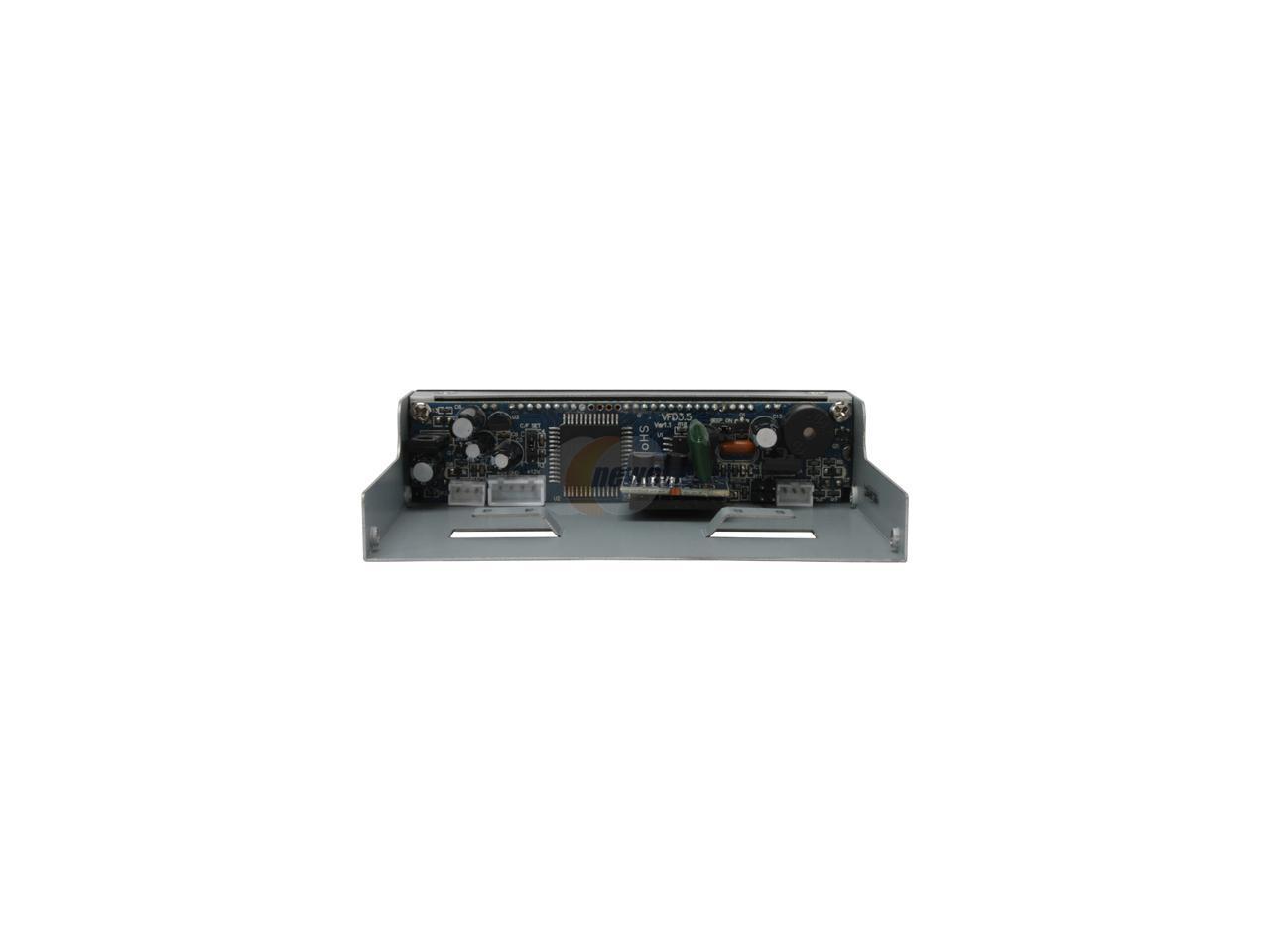 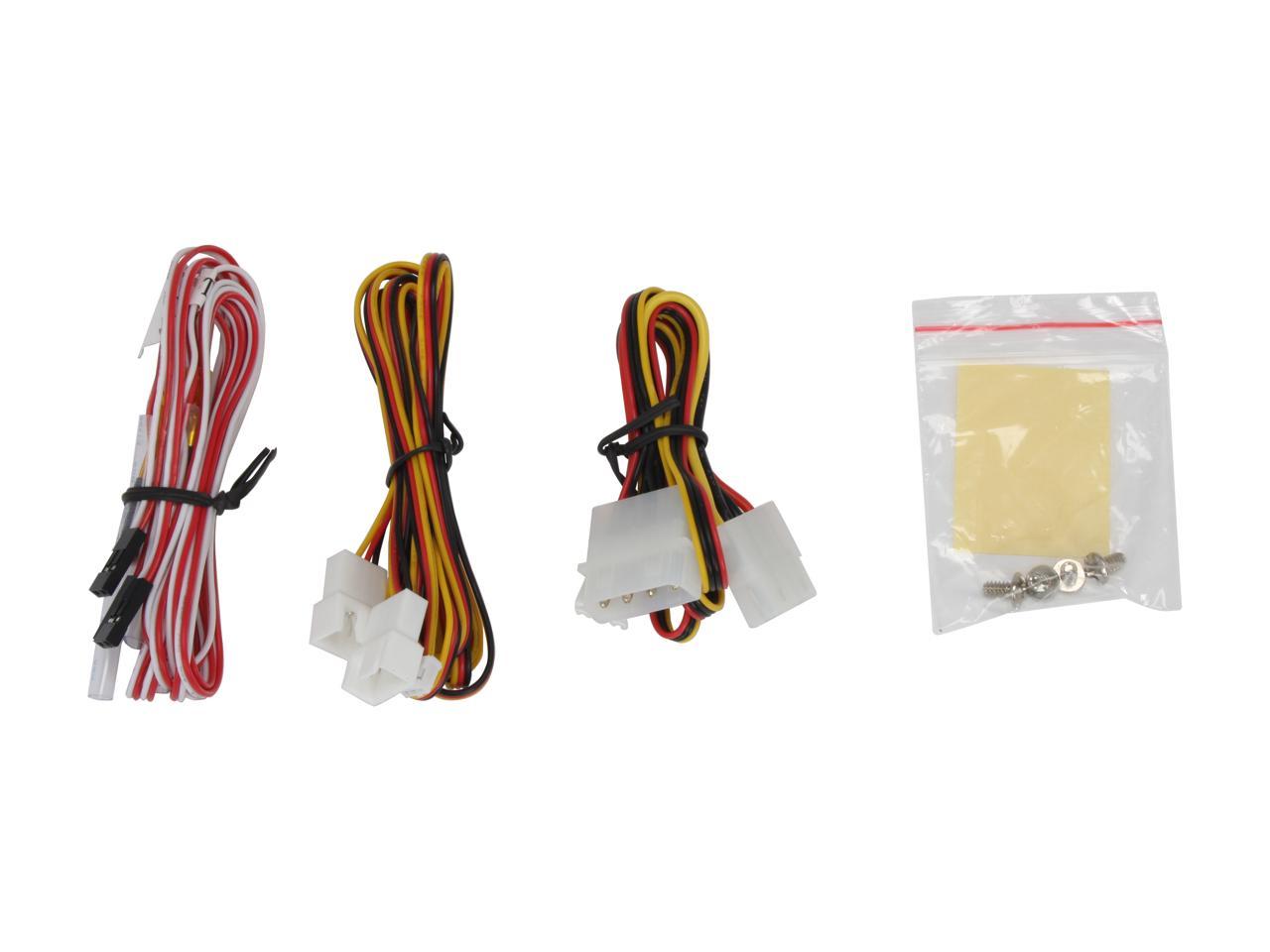 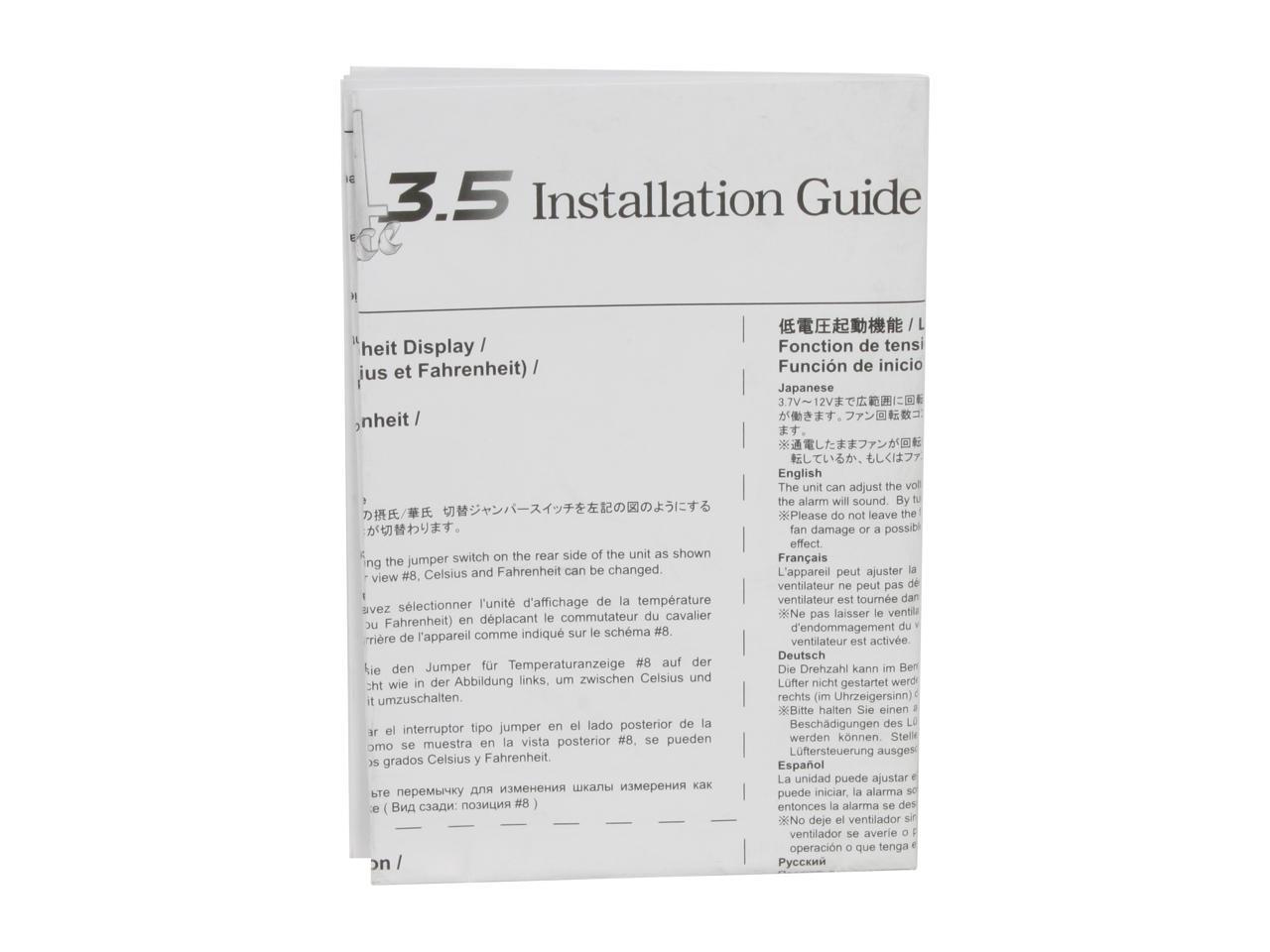 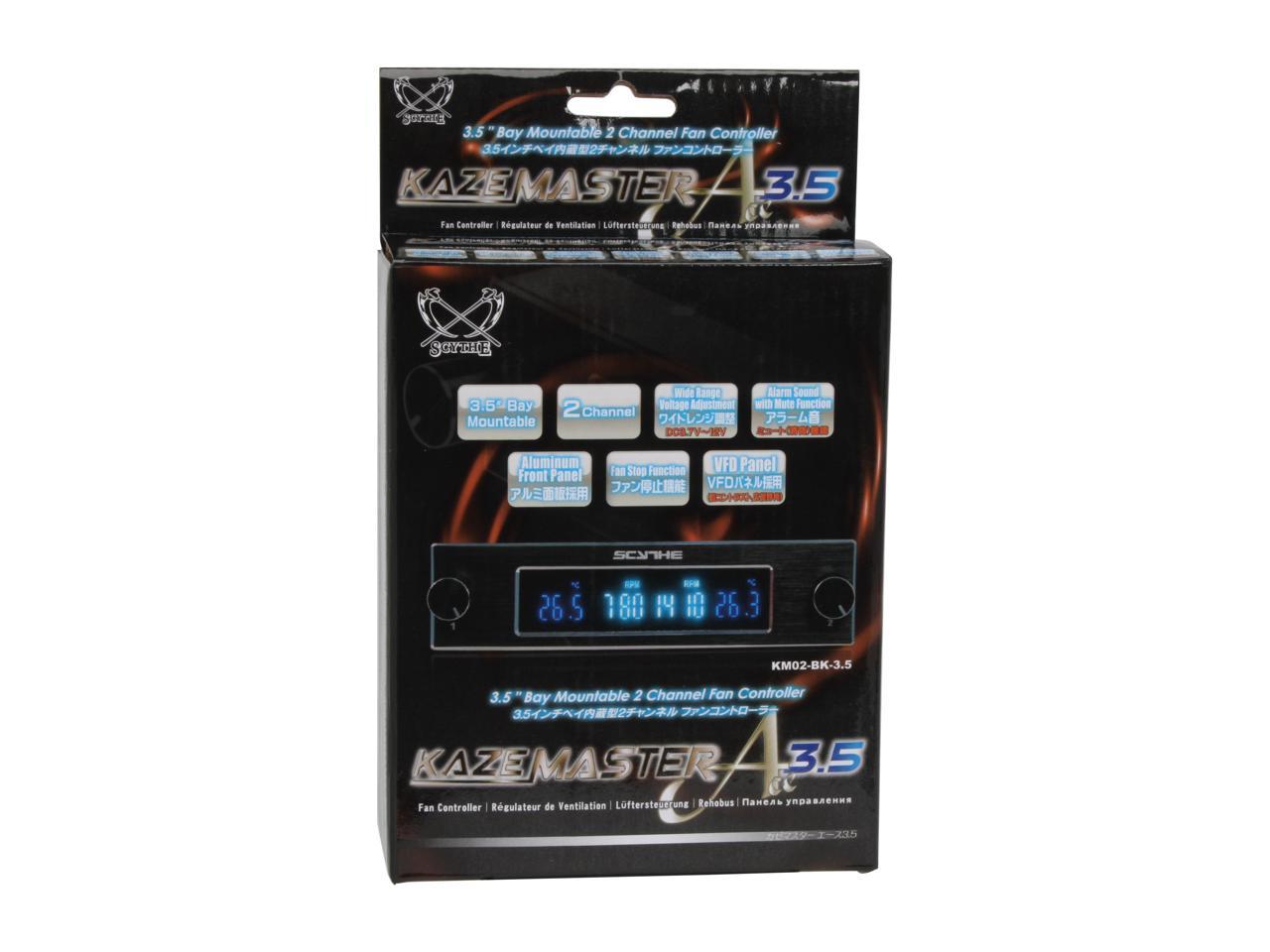 (17) Write a Review
OUT OF STOCK.
Overview
Specs
Reviews
Scythe Co. knows the problem: you've got lots of fans, lots of noise, and you still don't know if the fans are actually cooling things off enough. In fact, you don't even know if all of your fans are actually turning.
Here's their solution: a panel that checks the temperature in up to two locations and the speed of up to two fans (may require three-pin connectors on fans) every two seconds. You manually fine tune the speed of each fan for the best compromise between temperature and noise, and an audio alarm lets you know if there is a fan or a temperature failure. Mounted on a sturdy aluminum frame that fits in an unused 3.5 inch bay, it is available in black (KM02-BK-3.5) or silver (KM02-SL-3.5).
Take control of the single most dangerous factor a computer faces: its own heat. Is this for you? That's your decision, but I think I want one.

Pros: Have had this controller in and working for nearly two months now without complaint. Looks very nice in the case, readout very legible and it controls the fan speeds well....normally to +/-20 rpm or so. They do fluctuate a bit but I think that is to be expected. Install went easy enough but there ARE a few wires to hook up and route to make everything work. All leads were plenty long enough to reach in the HEC mini-tower and I'd feel confident that they would reach any fan in any case. The controller fit snugly in the drive bay....meaning I had to push it in with a light friction fit. Screws hold it tight. Liking the fact that it won't move around and is secure. Warning horn for when your fans stop is loud enough to get your attention but not annoying. Overall, a nice small controller that does what it is supposed to do.

Cons: None at the moment.

Overall Review: I bought this device without the benefit of NewEggs Reviews....which I ALWAYS read and find to be crucial in my choices of hardware. The KM01 controller seems similar but the reviews were spotty, so I chose the KM02 thinking that maybe they had improved the thing. Can't exactly say what is different about the two...but the 02 is working very well after two months of 10+ hr days. One thing that I wondered about is what kind of fans are being controlled by the units. Thinking that compatibility might be a real issue, I used Scythe 92 and 120mm fluid bearing fans for the controller and they work flawlessly. The 92 replaced a sleeve bearing 80 rear case and the other is in the power supply. Nice being able to control each to max effective flow levels while still being silent. I would encourage anyone looking for such a device to give this one a try.

Pros: this controller does everything it's supposed to and looks great on my case. installed pretty easily with the instructions and switched from C to F with the jumper. wires are long enough to reach anywhere in a standard size case. looks really cool with the two different color lights and seeing the temps without having any software open is convenient

Cons: as other posters said the knobs feel a little wobbly but with normal use i can't see it being an issue at all. didn't flush with the front with the screws in, my case has a weird front panel though =\

Overall Review: the fan on my video card is louder under load than the two fans attached to this at max speed =p. also i attached the temp sensor connections wrong at first and they just read 32° ha

Pros: Looks good, quieted my "Ultra Kaze" down to where you cant even hear it. I love the tempature sensors, though they are in celcius and I am to lazy to convert to Fahrenheit.

Cons: Lots of wires to install so cable management can be a problem. I have an old small E-310 which has very little room to begin with, so getting all those little wires to be neat, took some time.

Overall Review: I installed a Scythe "Ultra Kaze" in my E-310 and it was like a jet engine. This controller looks great in my case and also quieted that beast to a whisper. I also love the temp sensors. I cant even hear my computer now. The knobs do feel like they can break, but I dont plan on being abusive with them. Temps on my hard drive and CPU hover between 30-33 degrees at half power. At full blown jet force its even lower!

Pros: Controls the fans well, the RPM's displayed seem to be accurate, and so do the temps. Looks nice in my case. I had no use for the 3.5" slot anyways.

Cons: It feels very cheap. I think I'm gonna break the knobs off every time I touch them.

Overall Review: If your PC stays on the floor, and you have kids, the knobs probably won't last long. It does its job well though.

Pros: This is the best automatic fan controller that fits in a 3.5" bay that I could find. It is basically awesome. It detects the temp of "something" in my computer and then triggers a fan once it reaches a specified temp. So for example I can put it on my GPU. It then has a middle zone where the fan is as part voltage and kicks up to max when things get warmer. So basically my computer is super silent when I'm surfing the net or writing an email and then fans kick on only when needed for things like games. I wish they would bring this product back.

Cons: Sorry to say but the one minus of this thing is the quality. The fist one I got broke after a few minutes and wouldn't power one of the fans. The second one lasted about a year and is still going but the display is all jacked up so I can't read it.

Pros: small simple discrete little thing... controls 2 of my 3 fans 1 80mm and 1 120mm... not having my fans run at max all day has actually saved me money!!! being able to cool off computer before i shutdown and after gaming is awesome!!! the thermometer is nice as well you can chose to stick them anywhere on the fans on your cpu heatsink on your hdd or like me and one in the front and one in the back...

Overall Review: would be nice to be able to change colors on the readout... the extra thermometer is a nice touch...

Pros: it runs my fans. it has two temp reading so u can tell how your processor runs and your hd.

Cons: 30 bux for something your bios can do.

Overall Review: if your lazy like i am buy this product or a pc for noobs, other wise its a powder puff item.

Pros: Controls two fan, and displays 2 temp(can do both C/F via a jumper on the board), has an alarm if the fans stops spinning.

Cons: Jumper to switch between C/F is on the back side of the controller, so you can't switch between them on the fly, minor inconvience really, just make up your mind before you intall it!

Overall Review: rotating the knob all the way counter-clockwise turns the fan completely off. Rotating it all the way clockwise spins the fans up to about 2900 rpm(out of max 3000 rating on the fan). Comes in handy with my two 120 mm fans as they get loud when powered fully on, allows me to cool as i need it, and with the temp sensors, i can see when it needs to be cooled.