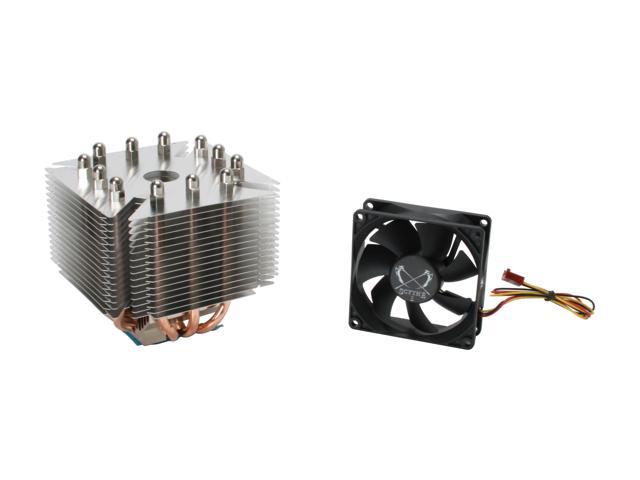 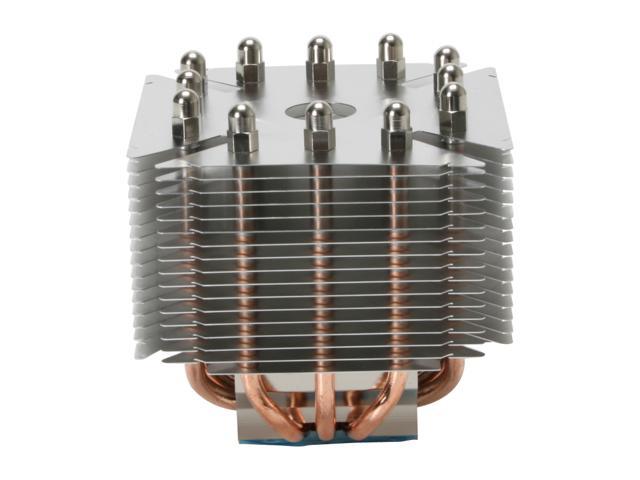 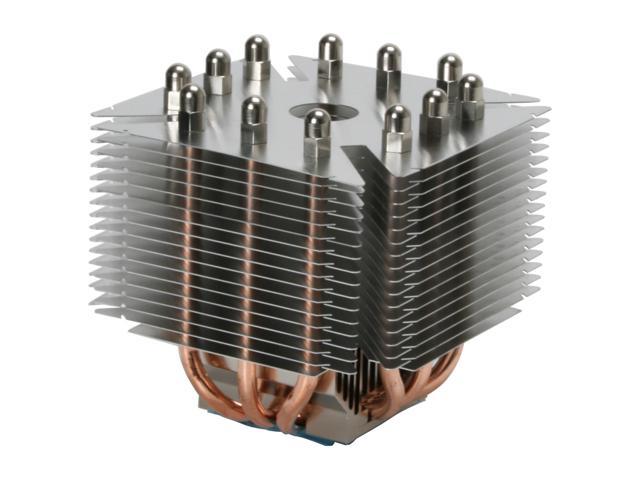 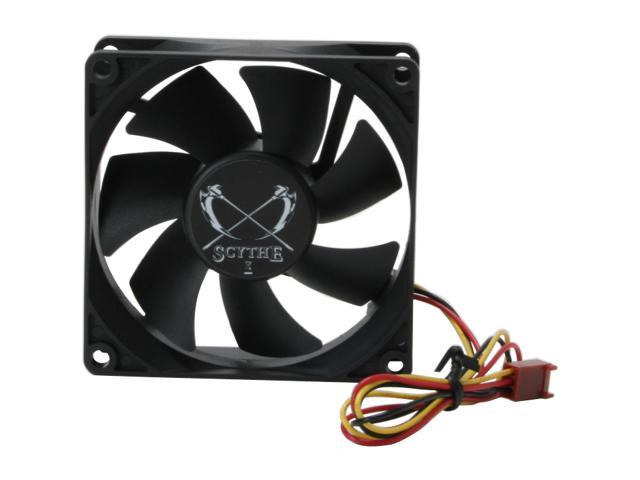 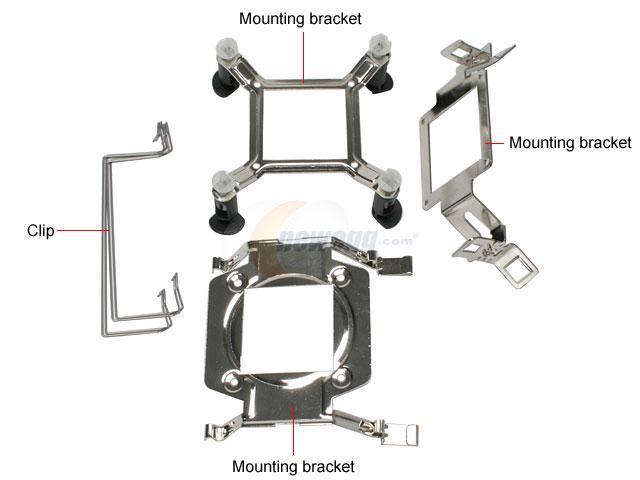 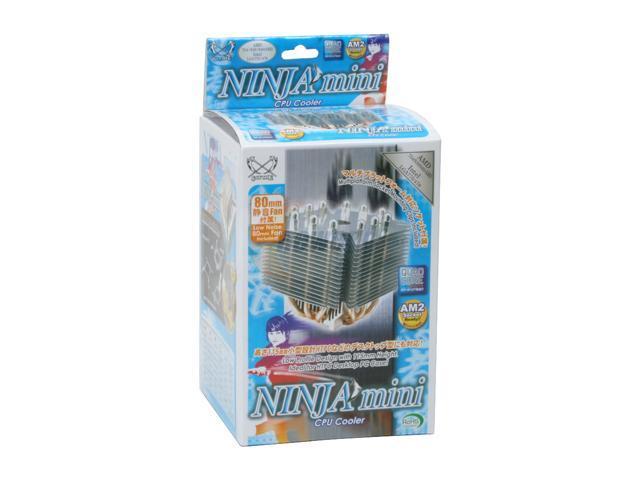 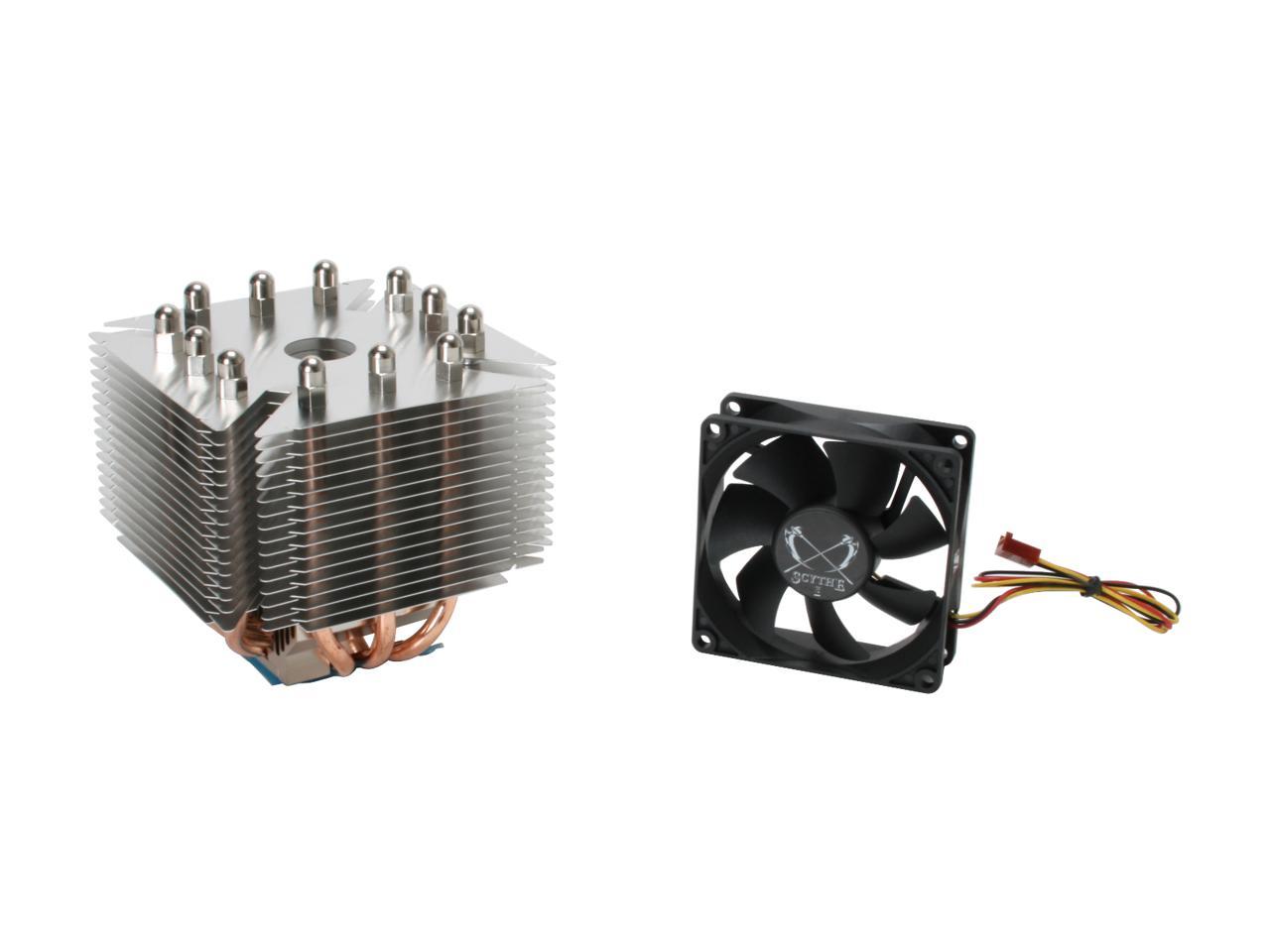 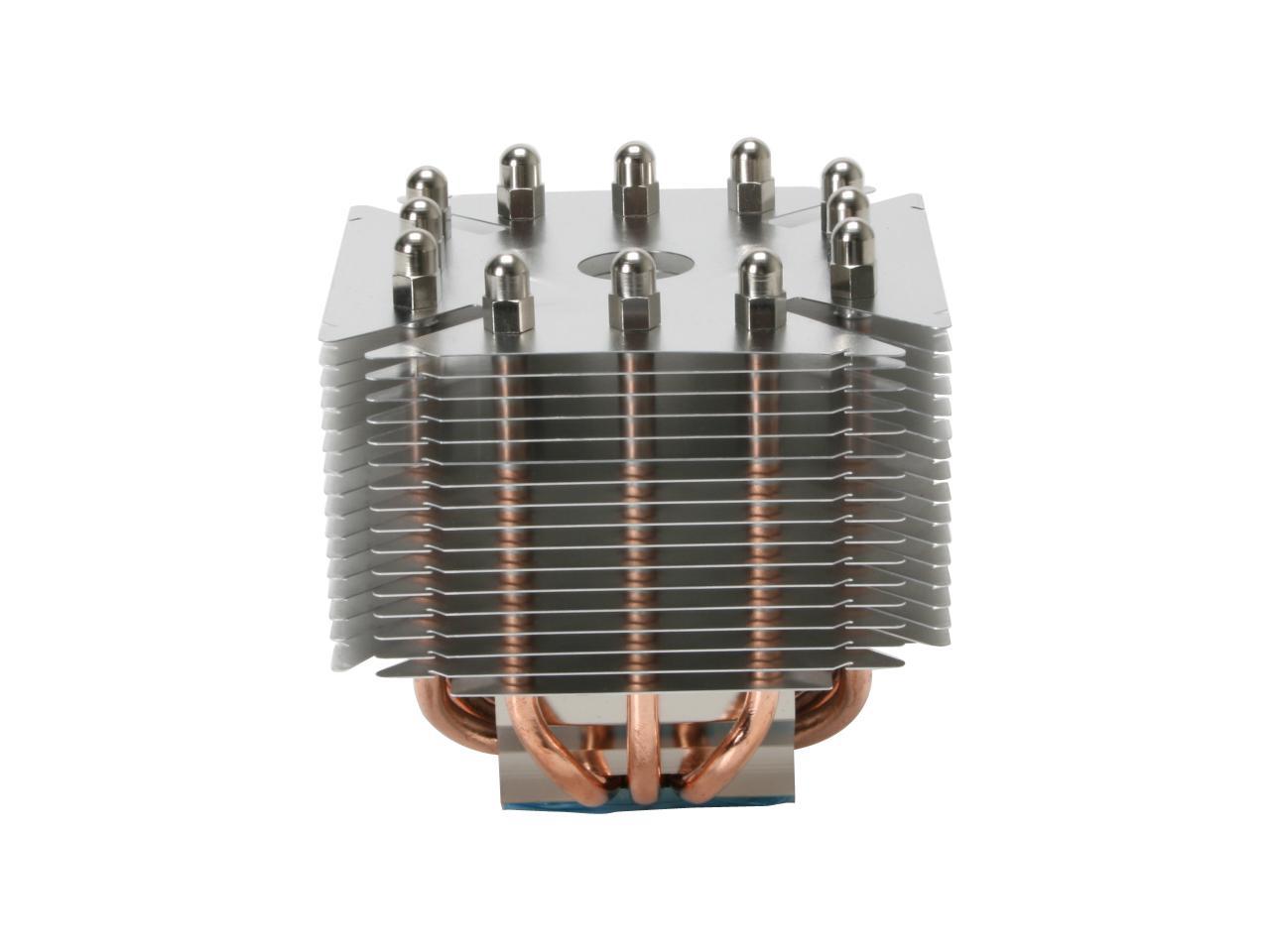 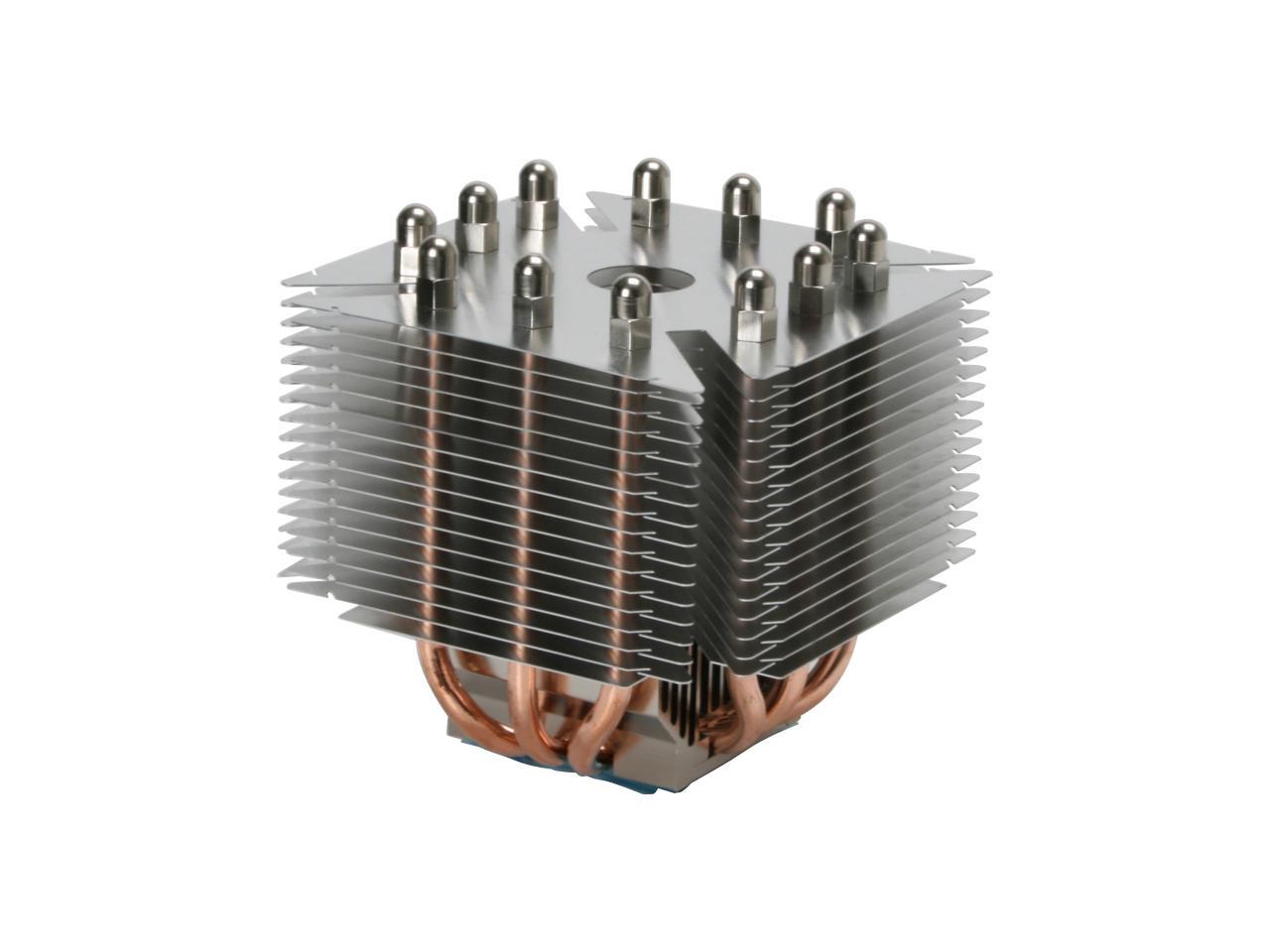 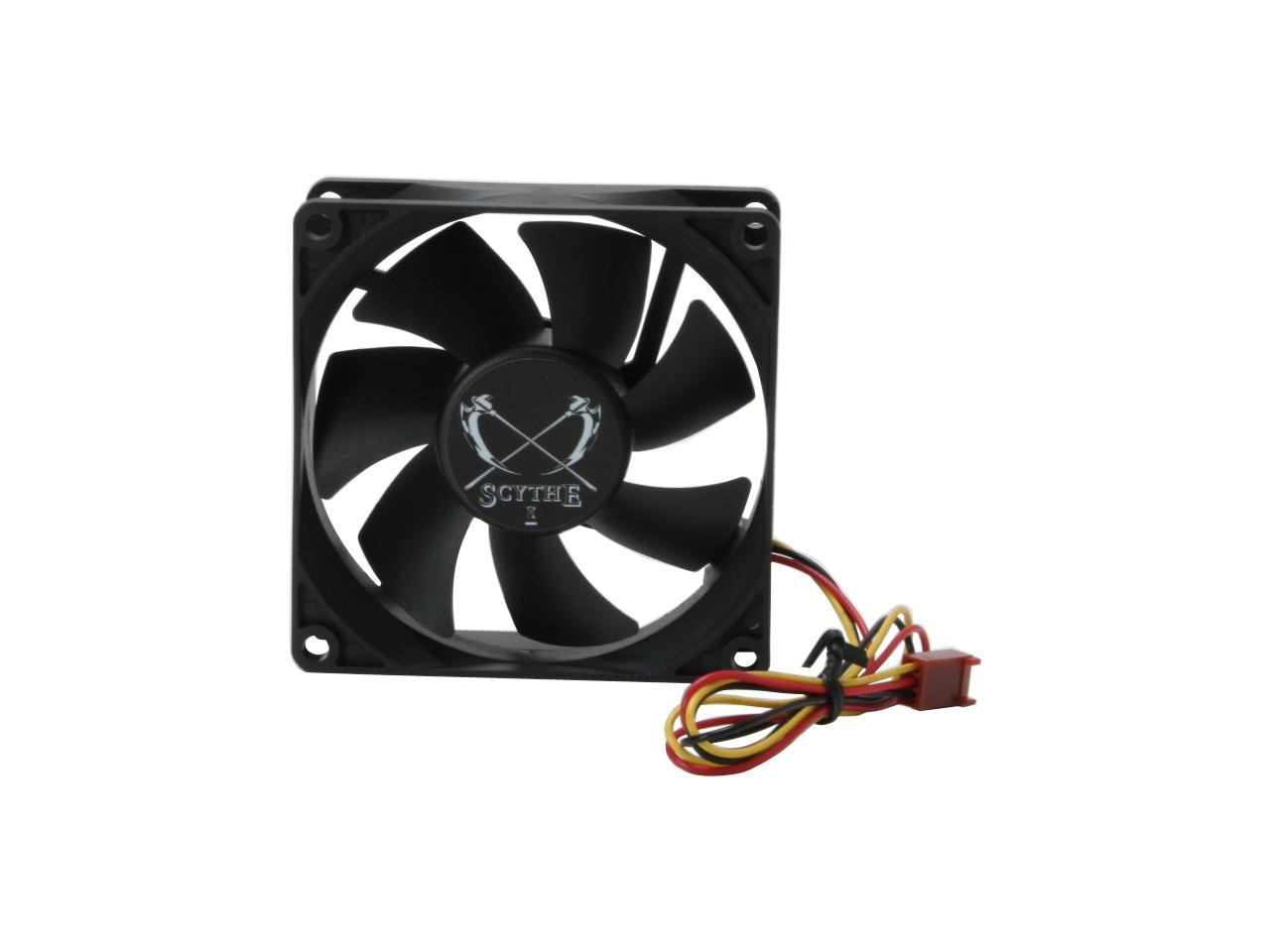 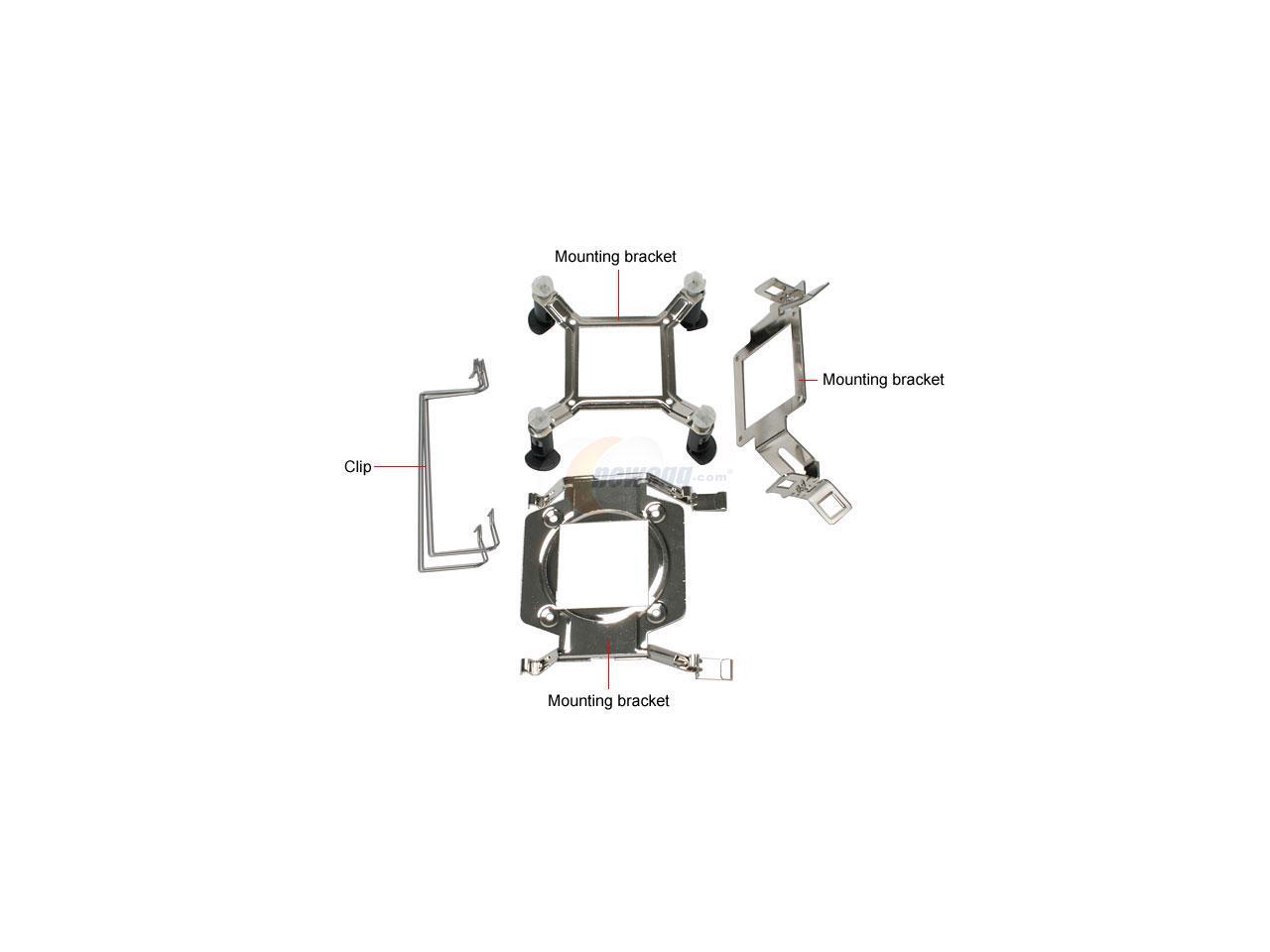 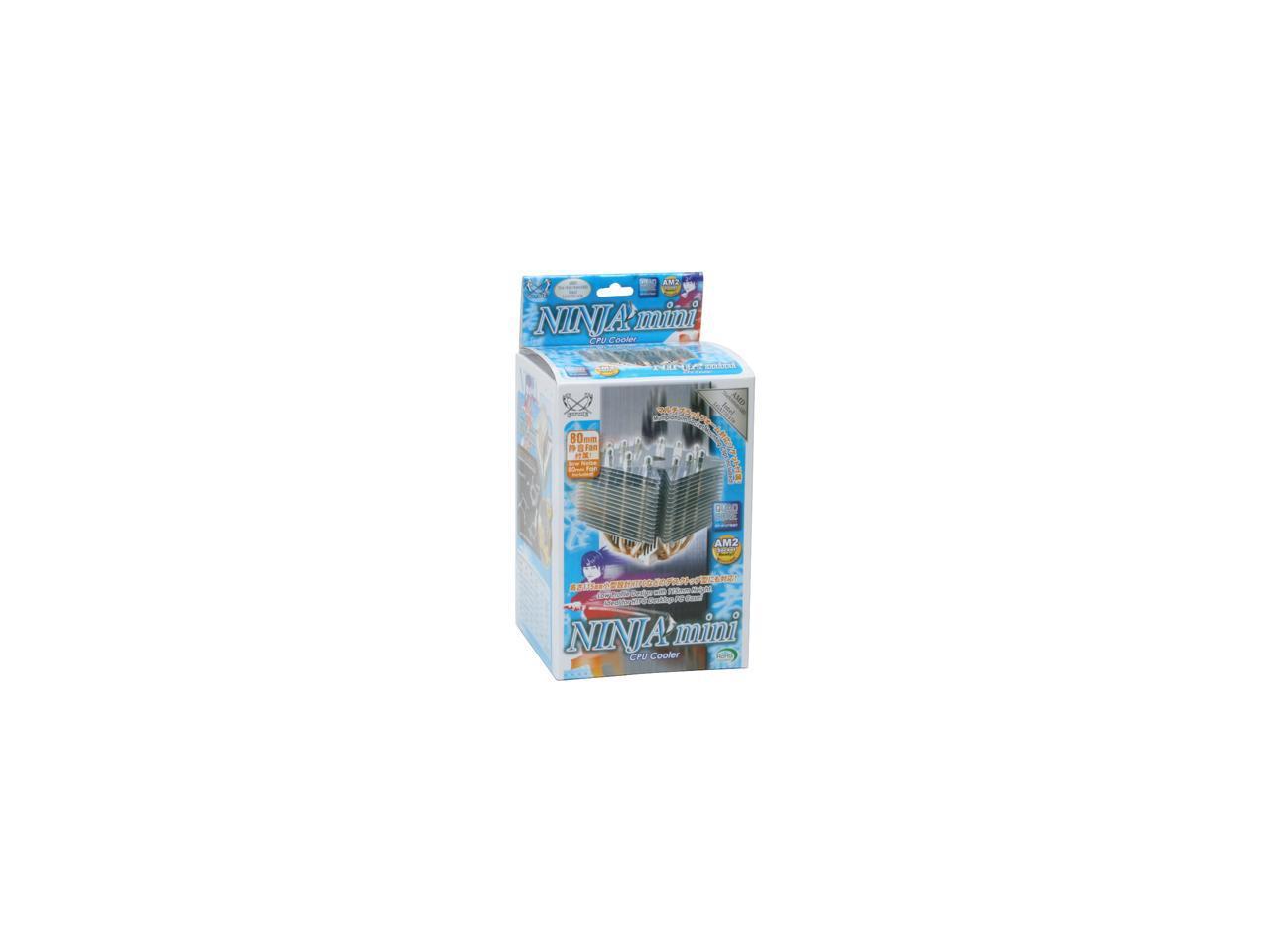 (162) Write a Review
OUT OF STOCK.
Overview
Specs
Reviews
The legendary ninja were known for their ability to go almost anywhere and get into seemingly impossible locations – and to do so silently. Enter the SCMNJ-1000 Ninja Mini from Scythe. Designed to fit into the 3U and other media PCs where space is at a premium, it takes on thermal build-up at a stealthy 24.4 dBA – quieter than the 30 dBA of a library. The 80mm fan spins at 2300 RPM on long-lasting sleeved bearings for many years of faithful service.
Like its bigger sibling, the Ninja CPU cooler, the Ninja Mini incorporates six 6mm copper heat pipes for maximum thermal dispersion away from the CPU among the ranks of aluminum convection fins. Also, like the bigger cooler, it is possible to operate without a fan, depending on the thermal needs of your system. The Ninja Mini is also able to add a 92mm fan to its arsenal in the even that more airflow is needed.
True to Scythe's dedication to user-friendliness, the Ninja Mini installs effortlessly onto Intel Socket 478 and 775 CPUs as well as AMD K8, 754, 939, 940 and AM2 processors where it will silently assassinate the demons of excess heat.

Cons: I ma using this on a amd socket 939 the included amd mounted clip it too big and gets in the way of a larger fan. I ordered a 92mm fan for it and because of this clip it will not work in my very small lan pc case. (Mountain Mods Bob Slay) This shouldn't be an issue in a regular tower.

Pros: Running this on a dual core allendale. I've overclocked it from 1.8 ghz to 3.0 ghz, and this heatsink/fan have been awesome. It idles at 20c, and max load is in the 30s. The fan is super quiet and can mount on any side depending on your case and setup. Great price too.

Cons: It's a little big if you're using a small case, but any midtower should be fine.

Overall Review: I will buy another one in a couple months when I put together another machine.

Pros: Excellent heatsink for it's size, as other reviews state it's almost custom designed for the Antec NSK2480/Media Fusion 430 HTPC cases. It's good for cooling CPU's at their rated speeds in smaller cases with no fan (just make sure you get some airflow over it from other case fans) or even mild overclocking if you attach the fan to it. If you are looking for a solid, silent performer for a media center case that's at least 3u in height you could do much worse. Not a con, but keep in mind that while this is small it's not truly low-profile; it won't fit in 2u mATX cases like the Lian-Li PC37 series. The wire clips for the fan don't make much sense at first; search for a picture of one already mounted and it will fall in to place. If you are using a Fusion 430 or similar case (that have the big 120mm exhaust fans on the sides) and you want quiet operation for HTPC use - and you don't mind the socket AM2 issues outlined below - then this may be the perfect cooler for you.

Cons: The instructions that come with the fan might as well be written in Sanskrit for all the good they do. The included fan isn't the quietest either - if you are planning on using a fan at all with this, buy a better one . However if you are planning on using a fan you are IMHO missing the point of it - you should really get another cooler like the Zalman 9700. This thing is designed for smaller HTPC cases that you want as quiet as possible. Those problems pale in comparison to the socket AM2 mounting system. I've installed a lot of aftermarket coolers on AM2/AM2+ setups in the past year and this is by far the worst. How Scythe managed to take the standard AM2 mounting system, normally the easiest attachment system out there, and turn it in to something as bad as the worst socket 775 clip is beyond me.

Overall Review: I advise anyone mounting this heatsink to do so before you mount the motherboard in the case, and if it's already mounted, take it out. It's still a PITA but at least it's doable; on two boards I tried it on mounting it inside the case proved near-impossible. After you figure out, through trial and error, which of the 3 clip positions to adjust it to for your setup (and it's not obvious at first that you can even do so), you then have to more or less slide the thing back and forth while holding the clips down with your thumbs (which are jammed under the low-clearance bottom). Even then, you may think you have it attached, only to find out it's not on tight enough (usually when you boot up and see your temps go through the roof). There are also reports of users installing this and actually breaking their mounts for being too tight. Installing this thing is an art, not science. Bottom line, if you have an AM2/+ setup don't go in thinking installation is going to be a piece of cake.

Pros: Huge cooler, probably great for passive cooling, if system airflow is sufficient. The included 80mm fan isn't too quiet, but not screaming loud, and provides plenty of airflow to surrounding components. The fan also is large enough to hang below the bulk of the fins, so as to provide airflow to the voltage regulators.

Cons: May not fit all motherboards, especially if the RAM slots are close to the CPU socket - the heatsink itself barely fits mine, but the fan sits on top of the RAM sticks. Also, the mounting system for socket AM2 is ambiguous, as there are three positions for the clips on the side of the bracket, and really the only way to know if these are in the right position is to test the system and see if it runs too hot.

Overall Review: Got this per recommendations from a couple websites for being a great quiet cooler for much cheaper than some of the other big names.

Pros: The base was pretty flat - I didn't have to lap it. And it looks nice too. Keeps my CPU nice and cool.

Cons: Mounting an AM2 socket was kinda annoying; I don't know about the other mounts. The included thermal compound is cheap.

Overall Review: I'm currently using this on an Antec Fusion, which it fits perfectly on. I did not mount the 80mm fan; so its just passively cooled by the 2x 120mm case fans right next to it. With this setup it keeps my CPU at only a couple of degrees above ambient temperature when idle. If you have a tight case, you might want to mount it before you install the motherboard.

Pros: Looks nice and cools a Q6600 better than expected on Asus P5E-VM HDMI board. Heatsink finish and flatness seem very, very good. Newegg packed it all nicely in peanuts, standard shipping got it here in 2 days!! Fastest order ever. Thanks Eggheads!!

Cons: Using the included fan with orientation blowing back to the back of the case requires fan to be raised slightly and the clip rests on the plain SuperTalent memory heat spreadder. This setup would not work if you have a very tall RAM heat spreadders. Be carful around the fins, they could cut. I left blood free afterwards though.

Overall Review: I used a piece of a credit card and spread a thin even layer of Arctic Silver 5 on the CPU, placed it into the socket, then did as someone mentioned here and used a screwdriver to reach down through the heatsink slots and push the pins into the motherboard. Thanks!! It made it a relatively easy install. Load below is Cinebench 64 multicore test, temps on hottest core, two run a dregree or two hotter than the others. Temps from Realtemp. Undervolted 2.4GHz - 33C idle & 42C load Default volts 2.4Ghz - 33C idle & 45C load Auto 1.375V at 3.0GHz - 37C idle & 52C load I have no need to run it beyond 3GHz, fast enough. I am not fond of the Intel mouting system, bows board slightly too.

Pros: Smaller than it's big brother (though it's still rather large). Can be used passively or with a fan. Long story short, it does the job. Passively cooling a Q6600 with this thing and it's keeping well within specs. Base was probably the smoothest I've ever seen. No lapping required.

Cons: For being "mini" it's large. Shouldn't be a problem for most cases, but check the specs to cover your 6. Installation was a PITA. I feared that I might break the mobo trying to install the thing. IF Scythe can get that down, it'd be perfect IMO. Also, the blades/fins of the heatsink are think... they'll bend easily and can easily cut flesh if you're not semi-intelligent in handling. Just saying is all :)

Overall Review: I tossed this into a DAW I built recently, using a lot of passive components. It was great as a passive CPU cooling solution, looks pretty nifty, and most importantly, kept temps nice can cool. Just make sure you built your computer with good airflow and keep in a well ventilated environment and you'll be just fine :)