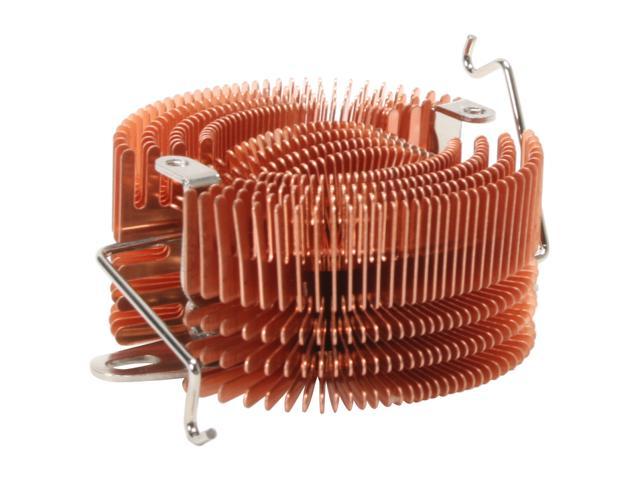 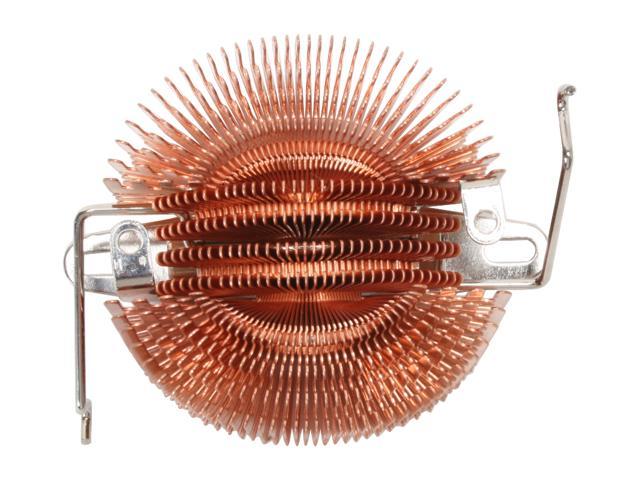 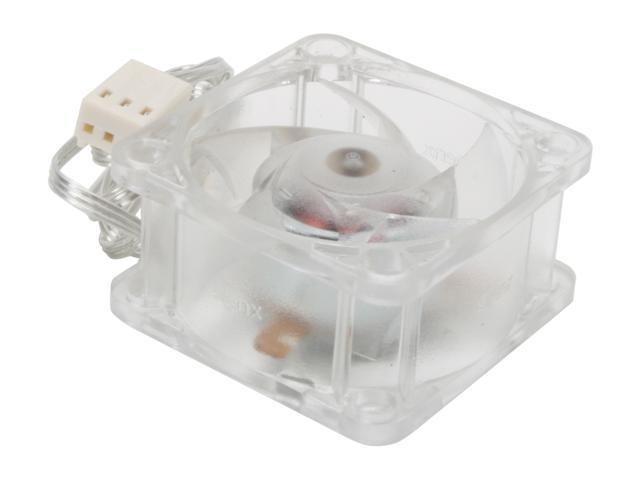 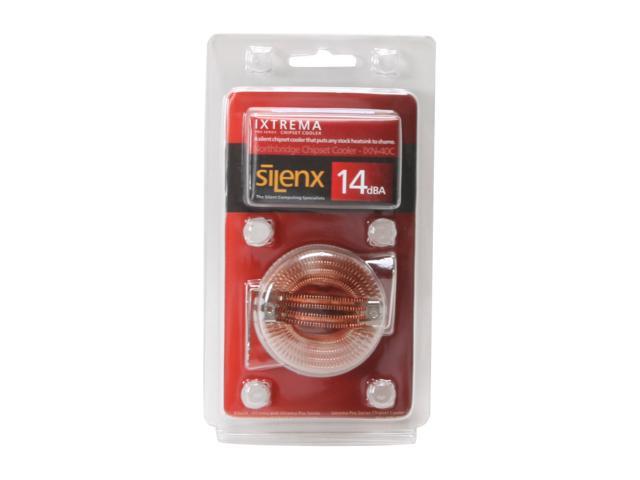 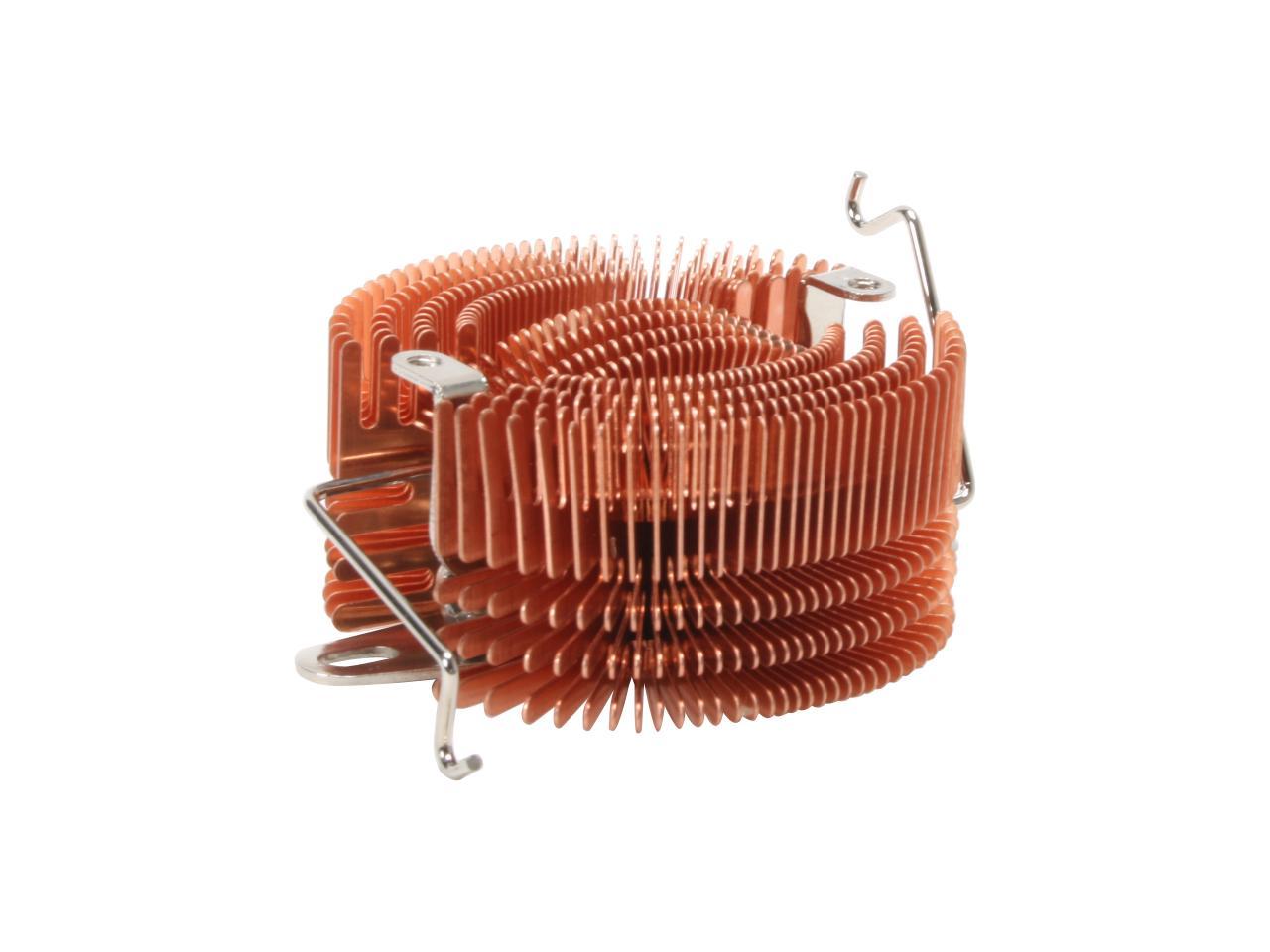 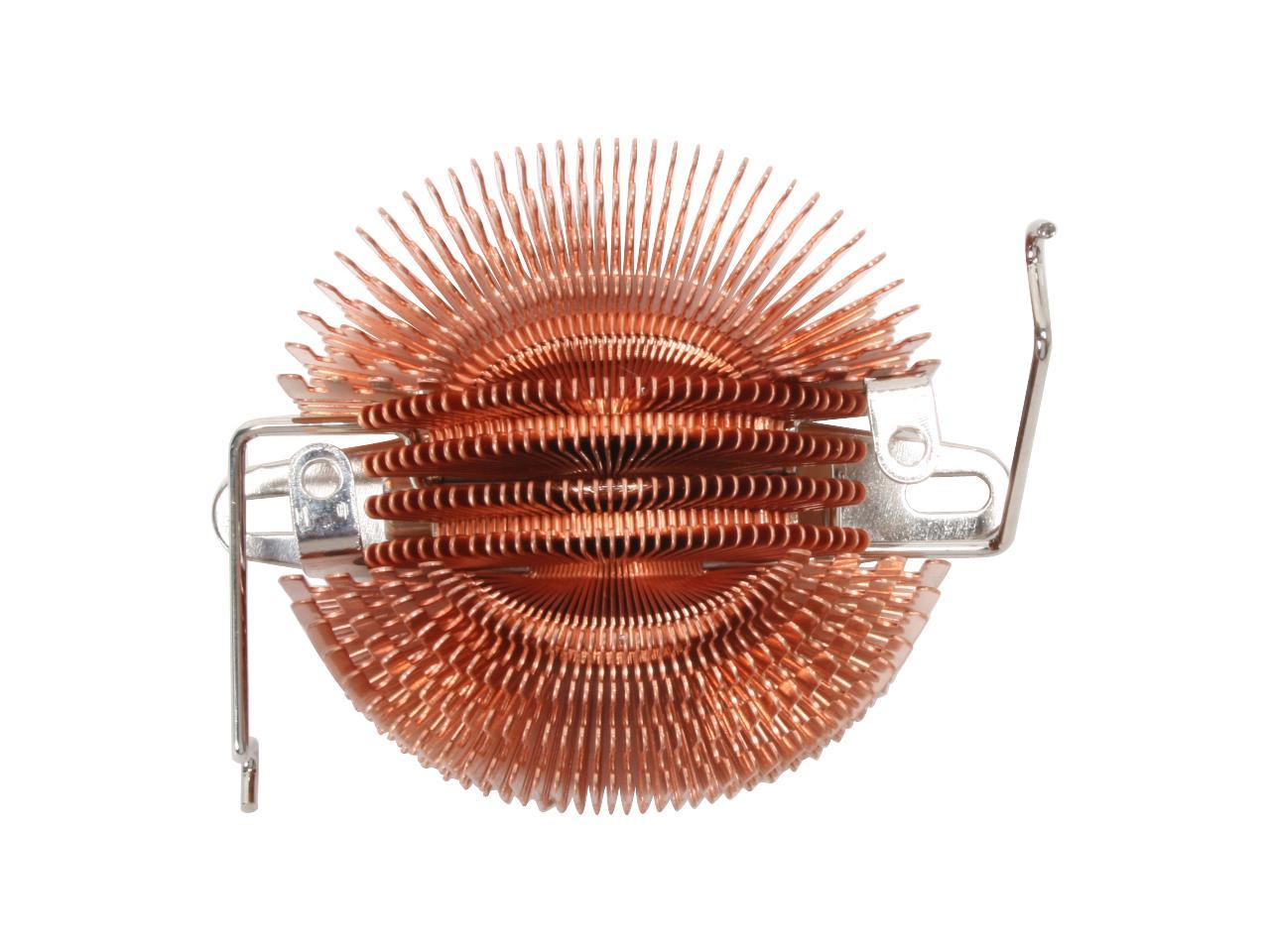 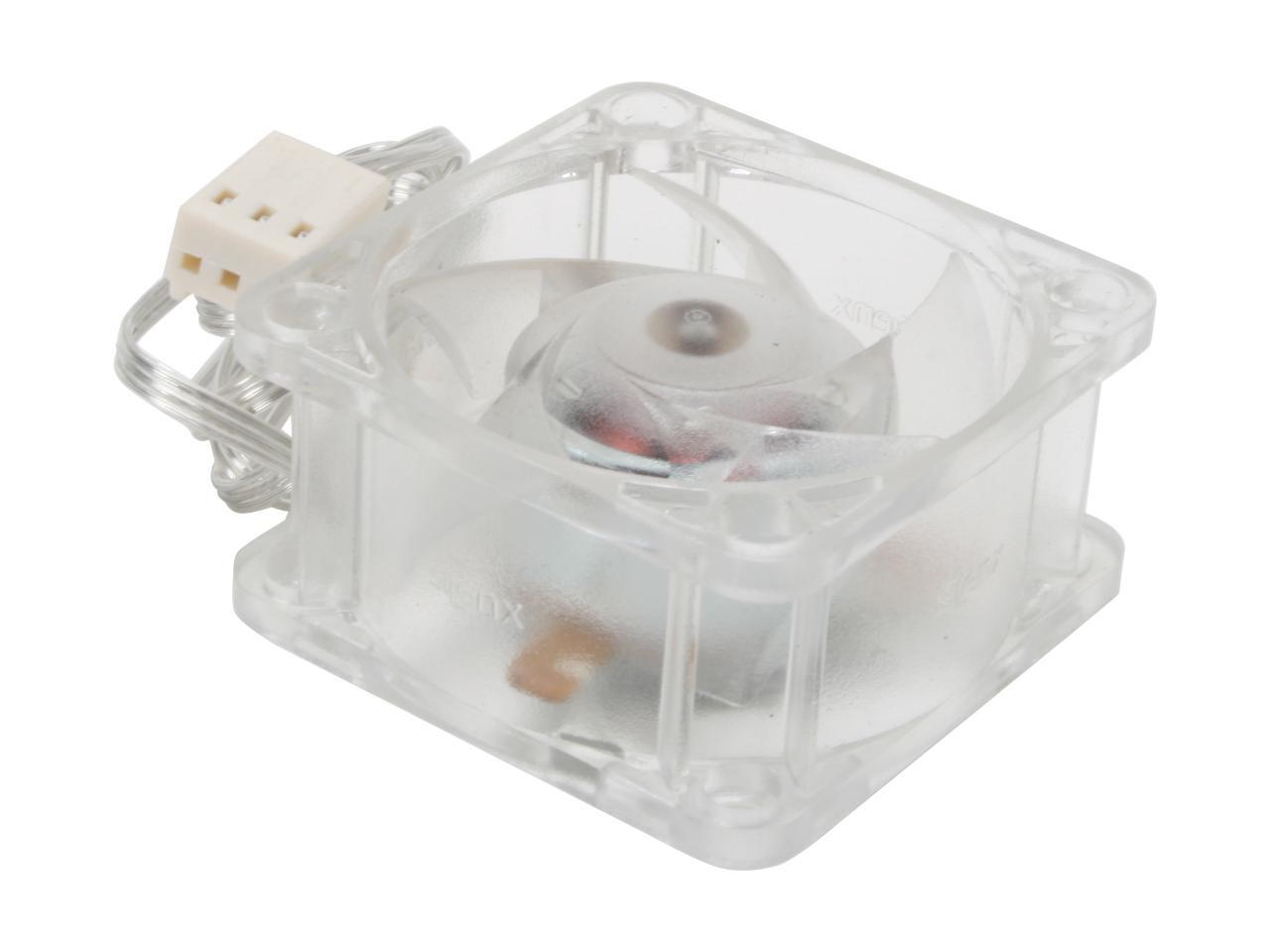 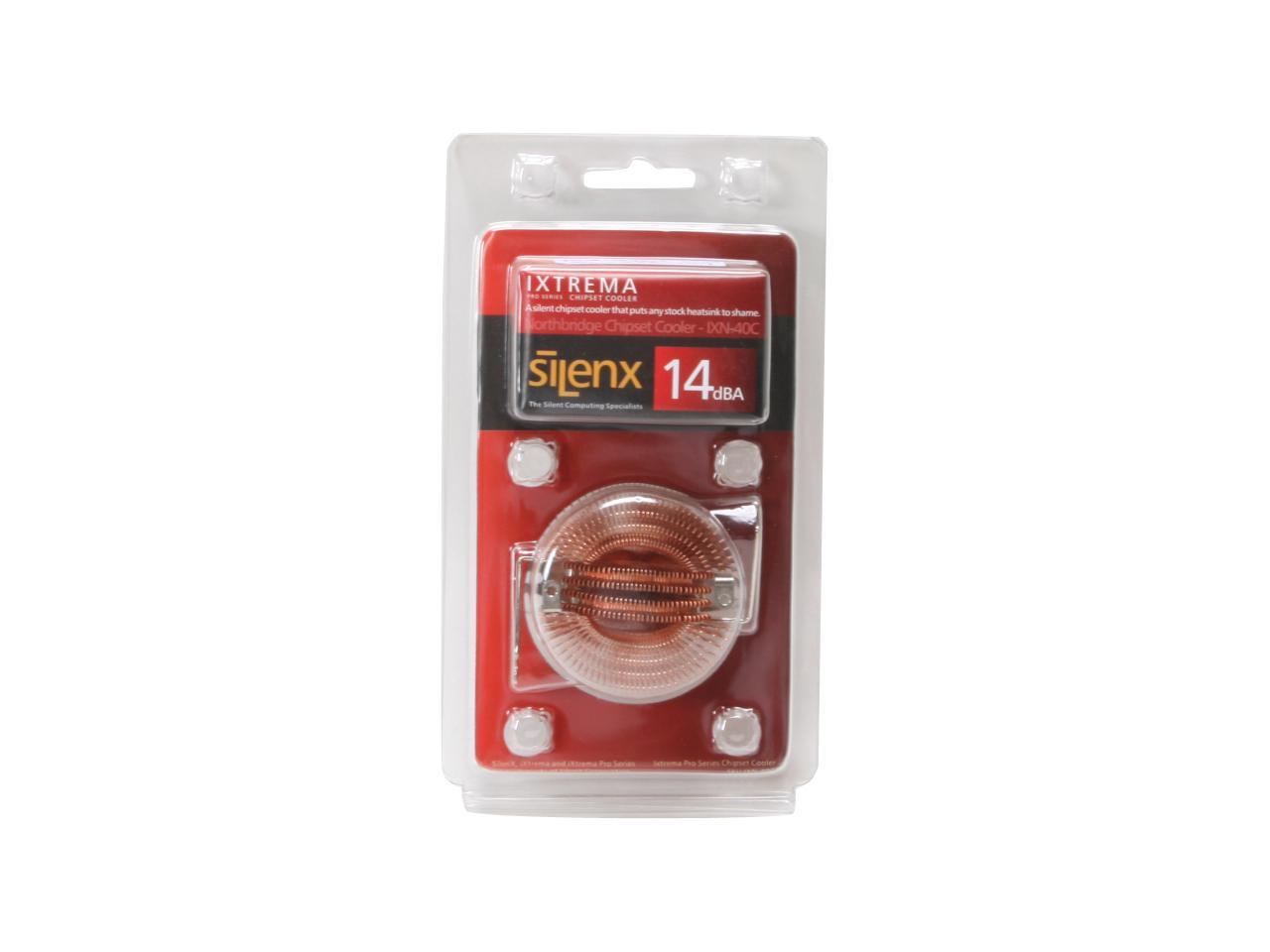 (97) Write a Review
See more "memory fan"
OUT OF STOCK.
Overview
Specs
Reviews
You've cooled your case, processor, memory, video card and hard drives. What's left? Oh yeah, the Northbridge. The SilenX IXN-40C will fit on most NorthBridge chipsets with mounting holes or spring mounts. The circular collection of copper fins provides plenty of surface area for great thermal transfer. The 3000rpm fan drives 6CFM of air over the fins, making it an even more efficient cooler. Keep your system the coolest, no matter how hot the action!

Cons: A bit heavy, don't drop it on your motherboard or you might knock some surface mount components off. It is also a bit tall, so definitely measure the height of your enclosure if you are building it in a tight little mini-itx enclosure.

Overall Review: I bought this to cool a celeron 847 soldered on to an m-itx motherboard. The chipset cooler the motherboard came with did not inspire much confidence in its cooling abilities. The space was a bit tight as the fan that comes with this unit is a 20mm thick variety. I salvaged and reused the slimmer one that came with the motherboard. Temps that would start around 38c and get into the low 50's under load are now sitting at 28c and hasn't exceeded 34c under load. I attribute part of that to the arctic silver 5 I used.

Pros: This heat sink is well built, and it is almost entirely constructed with quality, thick copper. There’s a great number of cooling fins to help dissipate heat upwards. It cools extraordinarily well, lowering my north bridge temperature by nearly 10C compared to the cheap and flimsy stock cooler of the GA-990FXA-UD3 motherboard. I suspect the temperature will continue to drop as the Arctic Silver 5 thermal paste settles and cures.

Cons: As you would expect from copper, the heat sink is quite heavy. The mounting hardware is comprised of cheap springs and plastic pushpins, in which simply does not compress well enough to maintain a good contact between the heat sink and the north bridge. The LED fan is very bright and at full speed is very loud.

Overall Review: The included mounting hardware WILL NOT FIT the GA-990FXA-UD3 motherboard as it is too short to reach the original pushpin holes. Luckily, I have a ton of mounting hardware lying around my work bench from years of building computers, so I fabricated one to fit and sure enough it worked like a charm. I do not recommend this heat sink unless you are certain it will fit your setup, or that you have the means to create some type of mounting bracket. The mounting hardware included is not adjustable or flexible enough to be considered universal. For the price, one can simply not complain. If you are fortunate enough for the mounting bracket to fit your setup, than you will not be disappointed in the cooling ability of this heat sink.

Pros: It's really heavy, something like 4X the mass of the old aluminum chipset heatsink on my board--it FEELS sturdy. It came with all mounting hardware, including a spring clip and a pair of pushpins, so it seems like it should fit a wide variety of boards, though I can only speak for mine--it also clears, if only just, my Coolermaster Hyper TX3 CPU heatsink. When I finally got the old chipset heatsink off and put the new one in its place, the temperature of my hot-running MCP-68S chipset dropped from something like 74C to around 49C--a nice 25C drop in temperature. Not bad for 13 bucks. The fan is fairly quiet (though I don't really care much about that, since there's a window unit AC and a fan in here, and I usually have earphones on while I'm on this machine anyway), and the blue LED looks kind of snazzy. I didn't use the included splodge of heatsink compound since I had also ordered a tube of Arctic Silver Céramique, but I can keep it for a rainy day.

Cons: So far, not many. When I put it on, the temperature in Everest read 46C at initial boot, but over the next couple of hours climbed to 49C. I'm not complaining too much, since it's still much, MUCH cooler than it had been running. It fit the motherboard--for the record, it WILL fit in the tiny space between the PCIe slot, the CPU socket and the RAM on a Biostar N68s+ board without trying to perform light surgery on the heatsink, but there isn't ANY room to spare, so do keep that in mind. And while it has this little sticky foam square for spacing, it seems really thin, it's very flimsy and it's kind of hard to place, and as a result, this thing kind of rocks on the chipset if you touch it just right. When I remove the CPU heatsink to upgrade processors, it's going to be like building a ship in a bottle to avoid disturbing the chipset heatsink. It really needs some sort of a metal or plastic shim to keep it from rocking, and maybe an extra pair of push-pins if you have to remove it to redo the heatsink compound. And I'm fairly certain that I'm not going to be adding memory with heat spreaders in the future, since I don't think I'm going to have the room, so if you're planning to overclock on a tiny, crowded board--I'm not--you may need to keep that in mind as well, depending on what kind of chipset you've got and where it's located.

Overall Review: I'm keeping an eye on it but I'm kind of impressed with its performance so far. Cooler components last longer than hotter ones, so I'd say it's $12.99 well spent, and I think I'd buy this thing again. I'd probably recommend it to anyone who thought they needed to keep a cooler chipset--it's almost certainly going to beat whatever garbage aluminum heatsink the factory sticks on their motherboard.

Pros: *I was able to attached this to my Perc 310 Card (took a little effort though), it upgraded a fanless 4x4x1cm piece of tin.. *It came with a fan.. another 40mm fan would run as much as this cost, so.. *Fan is silent *It felt cool to touch, I know this upgrade was an overkill but since it handles my personal raid it does not seem like much when 140mm fans cost the same price too.. *I will buy again once I need another Perc Card or etc..

Cons: *Small copper heatsink / mount on bottom, it did not cover the plate that covers the cores all the way, although I am sure this would not matter a ton since it was the edges. *They included Starz thermal paste.. it is a nice gesture but if your really going to buy a add-on heatsink for your bridges, cards, etc.. you may as well spend a few more cents and get real paste

Overall Review: *I used artic alumina for the thermal paste *The fan has 4 blue LEDs.. I do not really care for leds, this was for my personal home server that sits by my bedside. Since the side case plexiglass is above where this fan shines it is only a glow of the led and actually looks decent.

Pros: Fan works great, keeps the chipset cool (32-36c) in my Asus A8N-SLI, about the same as the original fan. Make sure you measure the your current chipset heatsink/fan to make sure that this will fit your board. Having an inch or so extra room around it wouldn't be a bad idea either.

Cons: Did not orignally fit. I had to grind down the brackets (about a 1/4 in on both of them) to make it fit. This does *not* mean you will have to, unless you have the A8N-SLI board. Other than that, there are no cons, I can't blame ASUS's failures on these guys ;)

Overall Review: I bought this as a 3rd replacement fan for the Asus A8N-SLI. They (Asus) have *very* bad chipset fans, and they refuse to send out higher-quality fans even though it's a known issue with that fan. However, if you catch them on the 2nd tuesday of the 3rd week in January of a leapyear, they will send you a replacement fan. Which will probably die within 6 months.

Cons: I have a micro atx MB made by asus, and the mounting did not match up. It those two U shaped metal mounts. I just took the mouting bar and a pair of pliers and bent the hooks till they set firmly in place. not a big deal just a little annoying

Overall Review: It almost impossible to make things like this fit to every format, if something does not fit dont be scared to make mods a little ingenuity never hurt anyone. Mind over matter!

Pros: works really well. running NB much much cooler. My NB was really hot to the touch before install 65-80C?. the GB heatsink, was their normal large chunk of Aluminum. i even had a small fan on it, but it just wouldn't keep cool. now the temps feel less than 40C. fan super quiet

Cons: installation pins suck. I put a garbage bag tie through the slits to secure the pins. think of it as a cotter pin. now it seems to hold just fine

Overall Review: GIGABYTE GA-P43T-ES3G 2x 4gb kingston ram running NB voltage at 1.2V had to grind the fins a little (1/8") to fit it in-its was bumping a capacitor on one side and CPU Heat snk on the other

Cons: Mounting ears are too long to fit the ASUS A8N-E mobo I need to fix; they run into other components. I would not consider this a major flaw except for the fact that the bracket is made from heavy-gauge steel and cannot be trimmed with basic everyday tools. I don't own a metal workshop or a grinder!

Overall Review: The offending bracket could be redesigned with notches that would allow snapping off the ends to shorten the ears for mobos like this one.