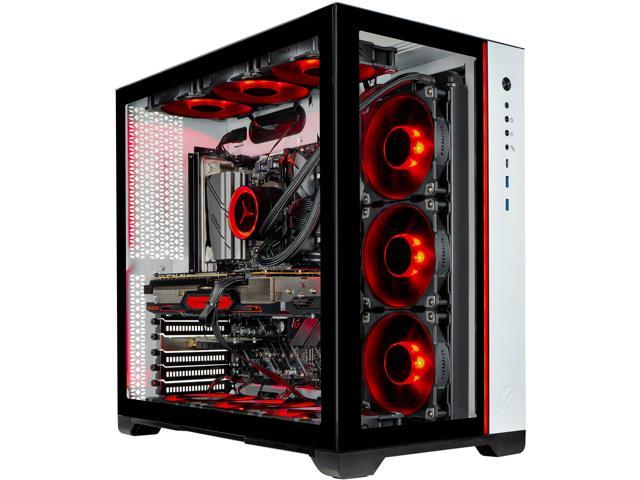 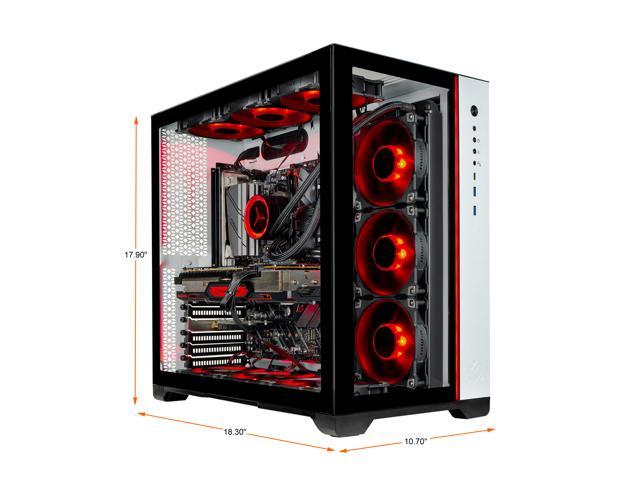 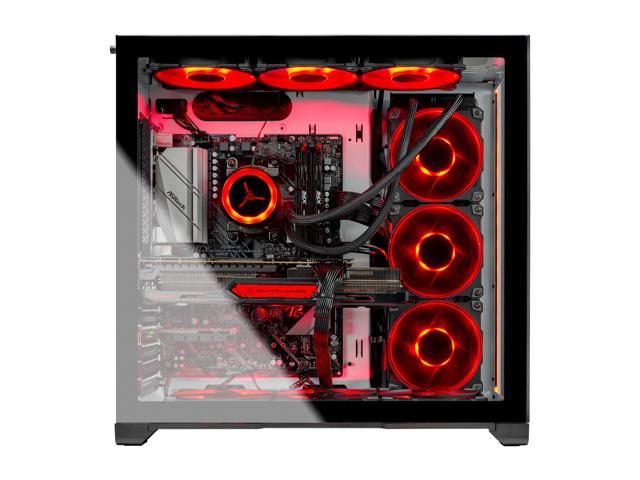 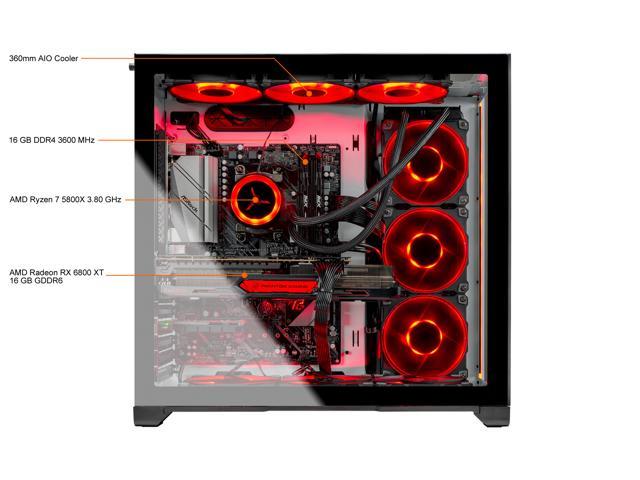 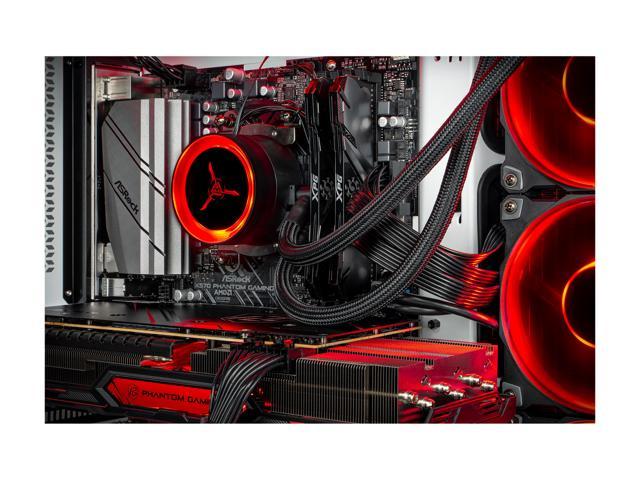 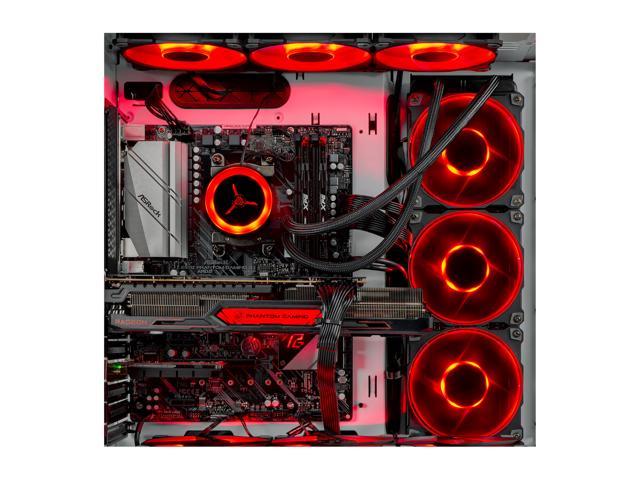 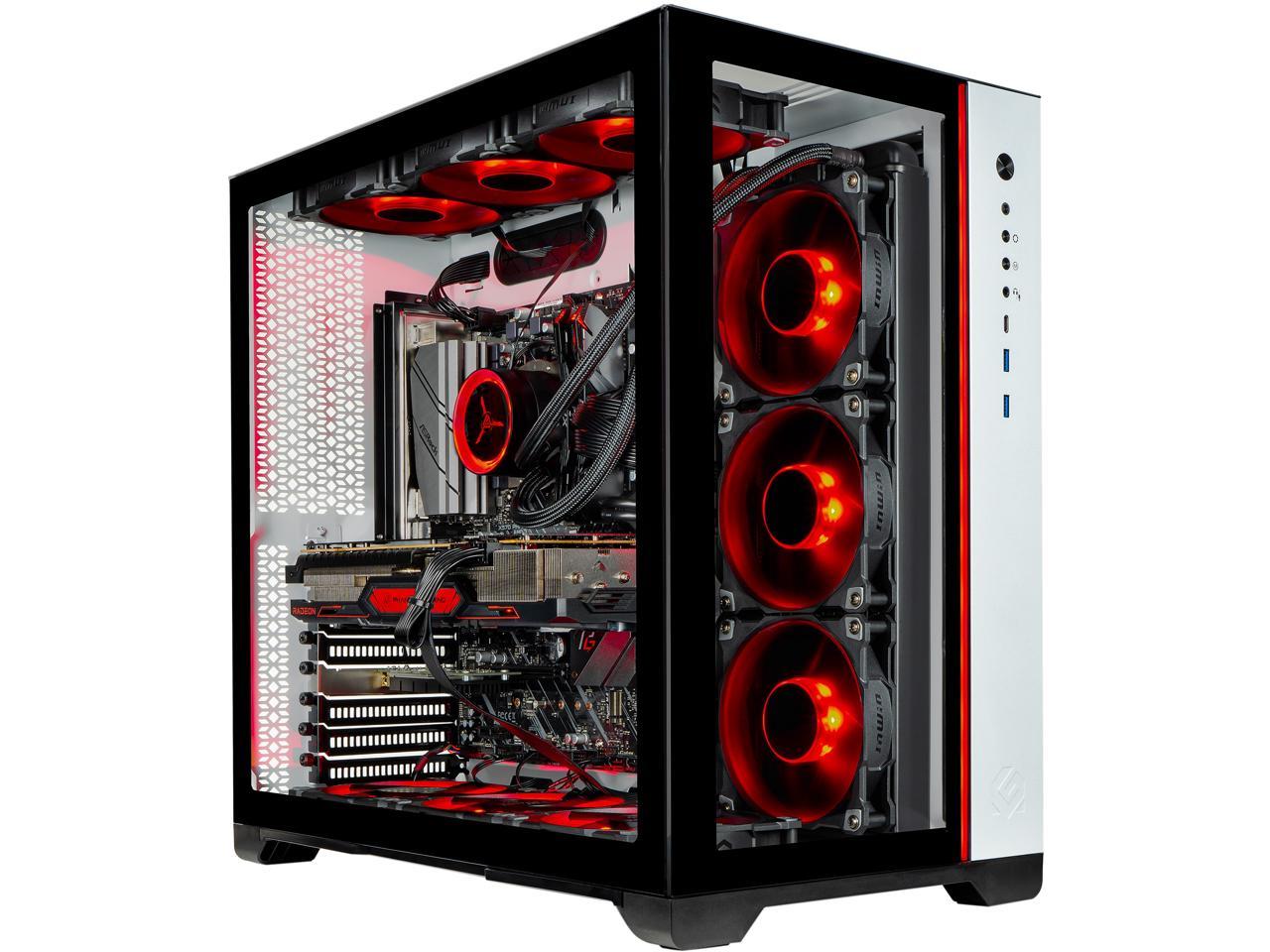 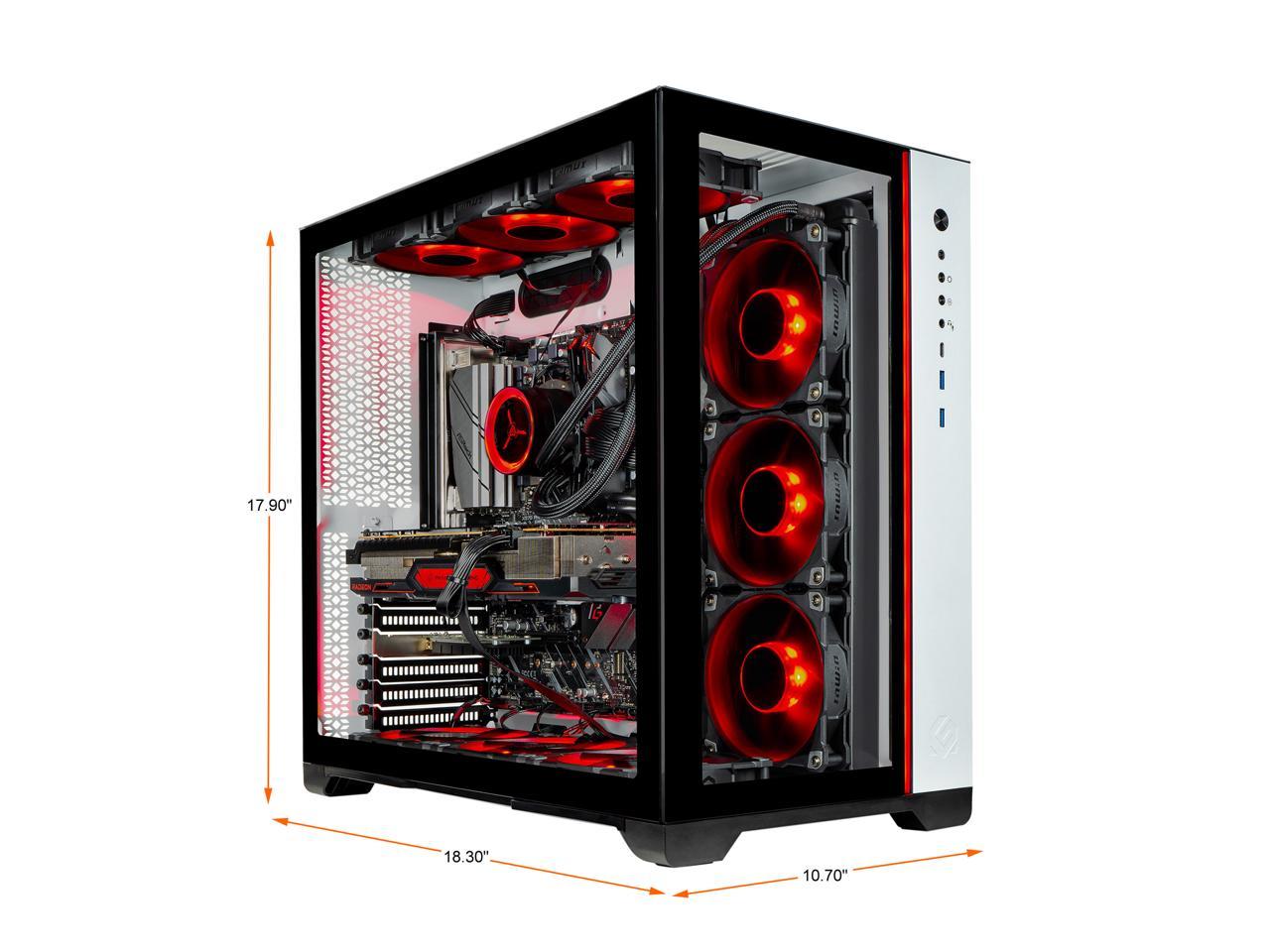 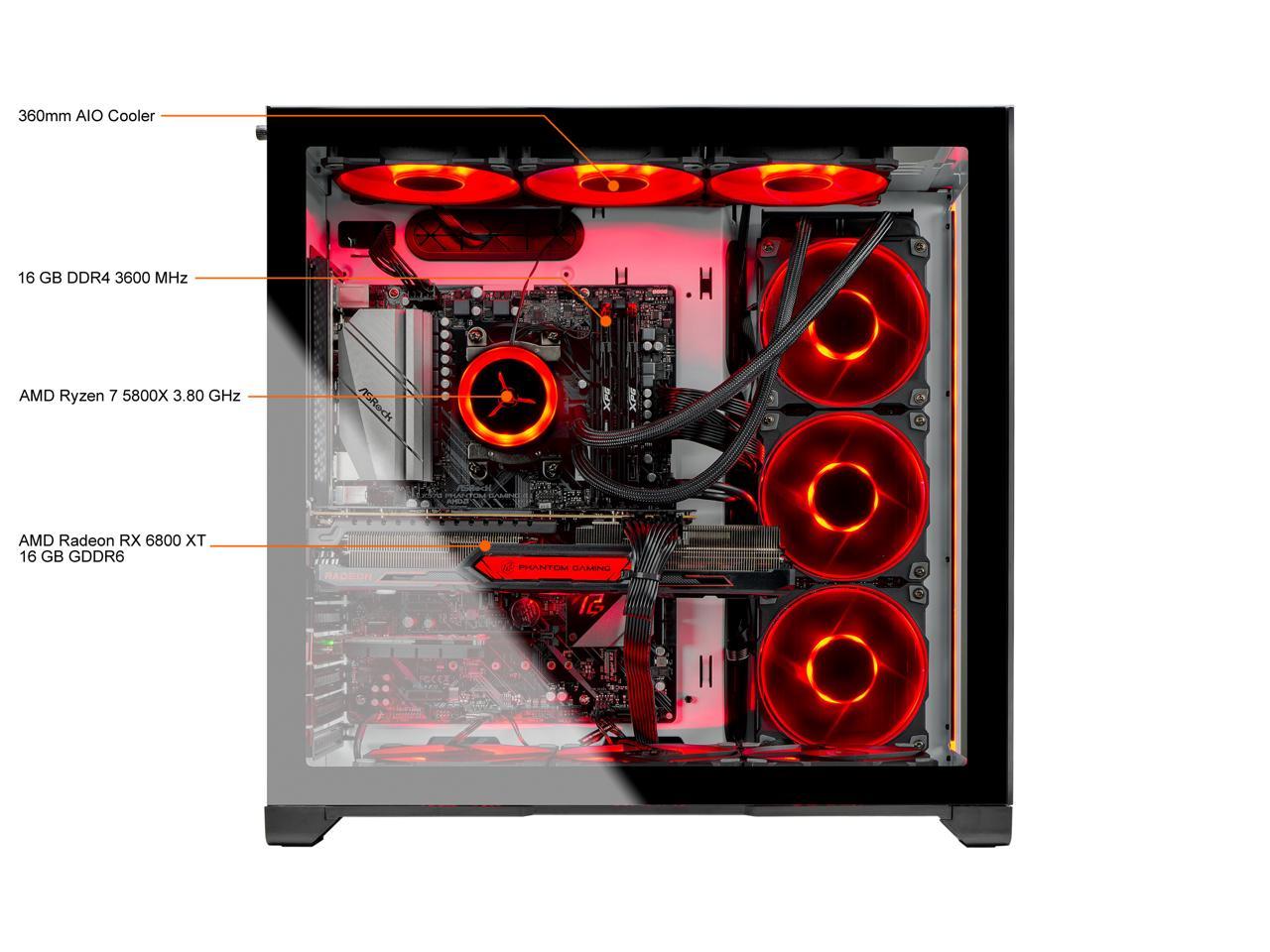 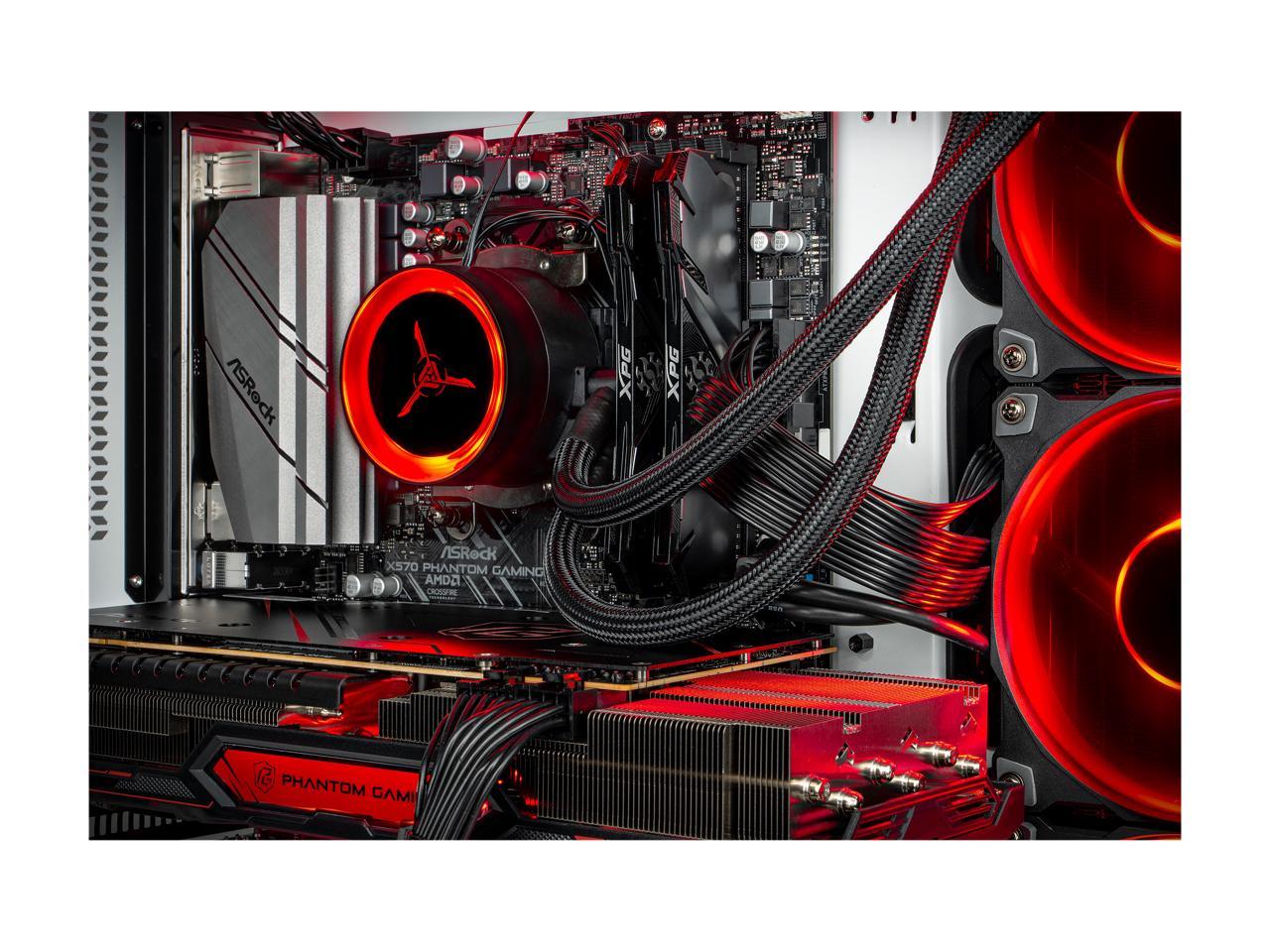 Learn more about the Skytech ST-PRISMII-0141-NE

Pros: Packaging was done very well. AIB GPU instead of reference model was used. Got an Asrock Taichung 6800xt with mine. Modular power supply. Got a Gigabyte 750w with mine. Cable management was done well.

Cons: Thermal paste was a bit sloppy. It seemed like they over-tightened the screws for AIO, had you use quite a bit of force to loosen them. No heatsink for the M.2

Overall Review: It's a fairly priced PC all things considering.

Pros: -Clean, nice work on the cable management.-Pretty quite considering the amount of fans. I think they may be set to run all the time, but still not as noisy as my last machine.-Haven't put it under extreme stress, but the stress I have put on it the machine stays nice and cool.-Very excited to see what this machine can do going forward.

Cons: -Not a huge con, the plate on the case that covers the motherboards ports was off a bit. Enough that I couldn't plug in some of the USB. I had to work with it a bit, but it seems manageable now.

Overall Review: So far it has been a great machine. I have purchased a pre-built machine from a different company in the past and was burned by failing and/or inadequate parts. However I should of known at the time of purchase the price wasn't going to match the quality. This computer looks and feels like the machine I always wanted! Thanks to Skytech for building a quality product and putting my mind at ease.

Cons: Drivers but they continue to get better

Overall Review: This thing is beautiful! Can customized the colors of the fans. Got the MSI 6800xt (wasnt my first choice but its random and with the shortage, gotta take what you can get) I received 3600 16 gb ram instead of the 3200 that was showed Runs every game on max settings for 1440p and extremely high fps The 5800x and 6800xt combo should last 6-7 years easily

Pros: -The machine is a beast -Looking good -Well ventilated

Cons: -Right off the bat i had Temperature issues -NoRGB Ram but i switched the 16Gb with a 32Gb RGB kit -Builder mistakes on CPU cooler -Noisy fans when gaming

Overall Review: It's probably not intended, but i had two issues with the Skytech CPU Cooler. First i noticed the temperature, the Fan weren't following any temperature curve in the Motherboard Tuning Utility. I had to change it from Motherboard temperature to CPU temperature. It still didn't work because the Pump/Fan header was connected in the wrong place on the motherboard (X570 Asrock Phantom Gaming 4) There's 2 connector CPUFan1 and CPUFan2WP one for fan only and the second for fan and Water Pump. He was in the first one... Also, by trying to make a good cable management job, they tried to put the cable around the CPU Pump bloc, but the cable got stock under the Bloc, so the Heat sink wasn't properly seated which caused temperature issues. Was idling 55 degrees and jumping at 90 degrees in game and now i'm at 25 degrees idle and about 55-60 degrees in Warzone. Would still recommend, but Check everything right when you get it.( Cooler, connections, fan curves etc.)

Pros: Newegg doesn't allow for partial stars/eggs; overall I'd give a 4.5 due to minor issues + Overall decent parts used in the build + Cable management was decent; not high-end boutique quality but not a rat's nest either, with nothing interfering with the visual aspect. + Reasonably priced, especially given the 2021 chip shortage and market condition on parts like GPUs and CPUs. Build cost if done myself was just a couple hundred under having Skytech build and ship it, which in my book is just the cost of convenience in having a system get to me in two days without having to mess around dealing with scalpers for a GPU

Cons: - Loose screw in the case on arrival; wasn't from anything important (was the eighth mount screw for the 360mm rad, bottom corner - was perfectly secure without it) - Rear cable management could use improvement, especially given a case as large as the Metallicgear Neo Qube; it's pulled together and zip-tied, so it's out of the way, but good luck if there was a loose connection, as *everything* - fan cables, PSU cables, etc - were all in one bundle. Another con though against the part manufacturer and not Skytech (other than in their choice of the product) was that the wireless card that came with was a TP-Link card which was the source of headaches (blue screens, kernel panics, refusal to even boot, refusal to install correctly) when installing Linux and/or Windows. Once I pulled that card, everything worked perfectly smoothly. As a side note, the little cover plate from where that wifi card would go wasn't included in the extra stuff that Skytech sent along (the extra PSU cables, fan screws, and whatnot)

Overall Review: Given the current market, I'd recommend Skytech as a builder over others such as HP/Dell and would consider them on par with their competitors (CyberpowerPC, iBuyPower) in terms of expectations vs reality. Skytech did an overall acceptable build with minor flaws that can be overlooked if taking into consideration having some experience with troubleshooting. The pricing was reasonably fair, and the shipping was as expected. The issues I ran into were incredibly minor on Skytech's part, and it's not their fault the drivers absolutely suck for the wifi card they chose. If not for the loose screw, missing cover plate, and the hassle of sorting out the rear cable management, it'd be a 5 egg/star experience. Overall in accounting for those issues, I'd give a 4.5 if I could.

Did you find this review helpful?
Anonymous
Ownership: 1 month to 1 year
Verified Owner
Great computer with one annoying flaw5/18/2021 10:24:32 AM

Pros: This thing can handle anything I throw at it. I am only running on 144hz on a 2k monitor but I can have intense games running without any slowdown if I have to swap over to other tasks. Only issues I've had gaming have been due to my home network. It's a beat and is very capable of streaming while I play.

Cons: The I/O shield is not accurate and prevents me from using many of the ports on my motherboard. It felt like it would be a hassle to completely tear my new computer and I didn't feel like repackaging it so I'm just using the USB ports on the front of the case. It hasn't been a problem so far but I imagine I'd be pretty steamed if I had a lot of things requiring USB ports. Also, the fans seem to be plugged straight to the power source, I'm sort of ignorant on this, so it's pretty loud.

Overall Review: Great computer but a little annoyed that I have the I/O shield issue given the cost. That aside, I would recommend the purchase I'm sure I'm the outlier.

Pros: Got a lot of good components at a fair price. Mostly purchased for GPU but was still a decent mainboard upgrade.

Cons: RAM was insufficient for my purposes so was in need of immediate replacement.

Overall Review: Good value if its in stock. If the price has risen above 3k might not be as worth it.

Cons: Came with mouse and keyboard, the mouse was DOA. (Did not want or need them anyways) Power supply seems small for whats inside; however, seems to run so far with no problems. Internal foam packaging was very tight and put a lot of pressure on some of the components. Be aware that some of hardware might need to be tightened or reseated.

Overall Review: Great product for someone who does not have the knowledge to build a PC, or needs a working product fast (my case). Slightly on the expensive side, but it seems you always pay extra for a prebuilt PC.