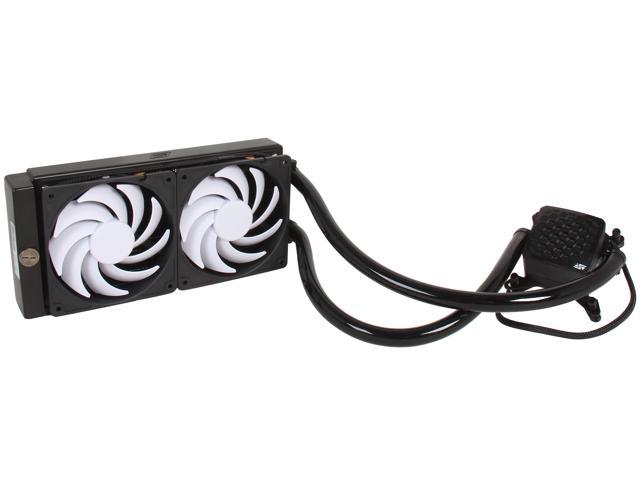 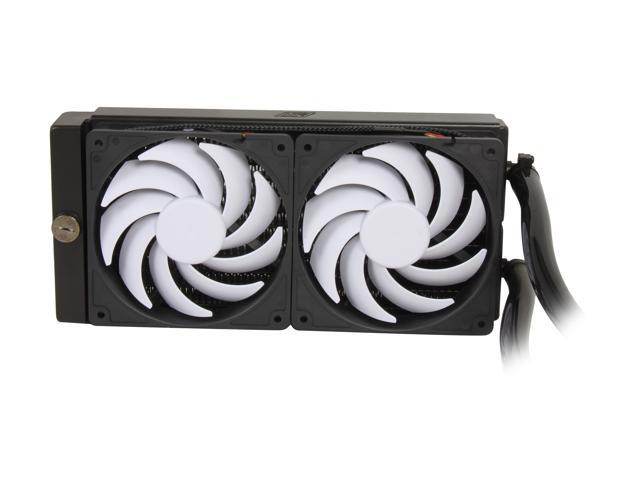 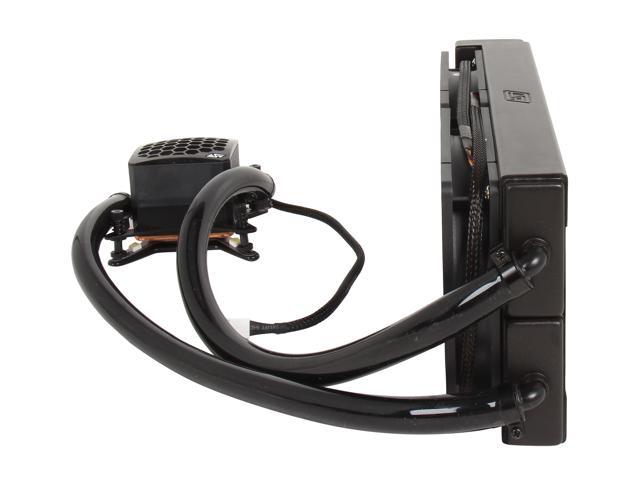 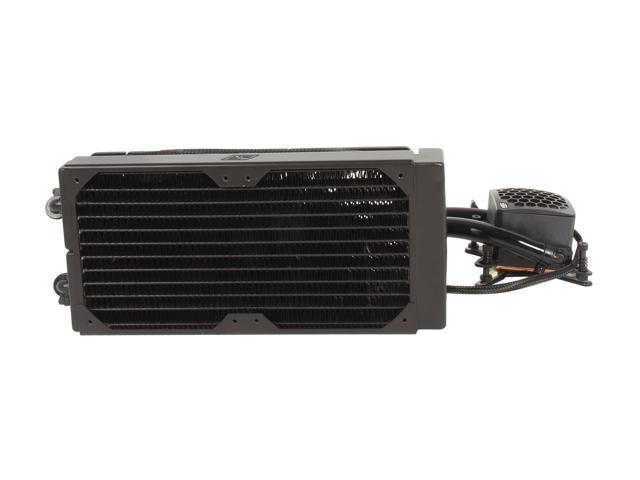 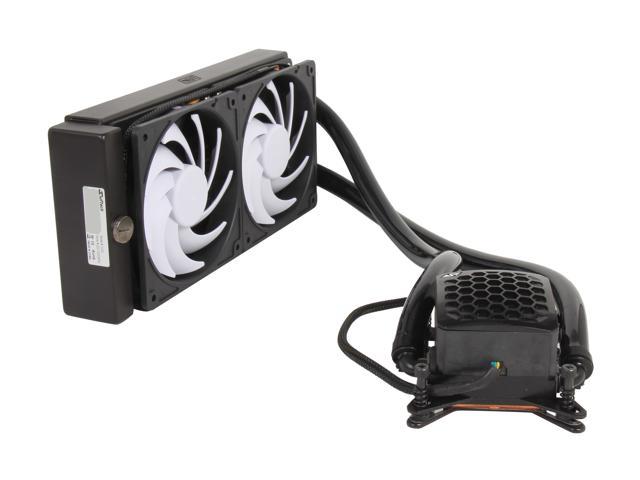 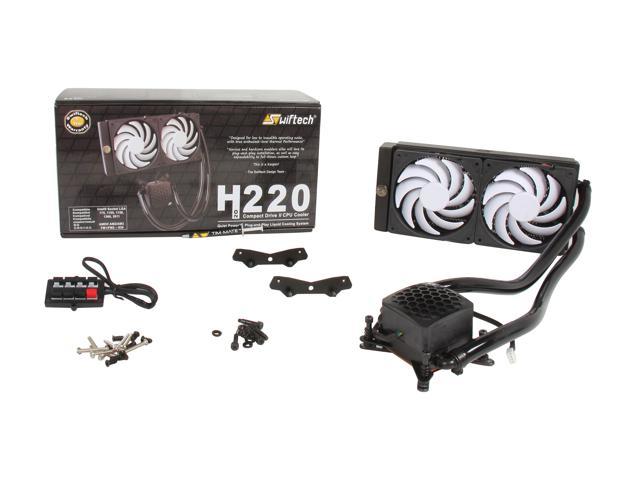 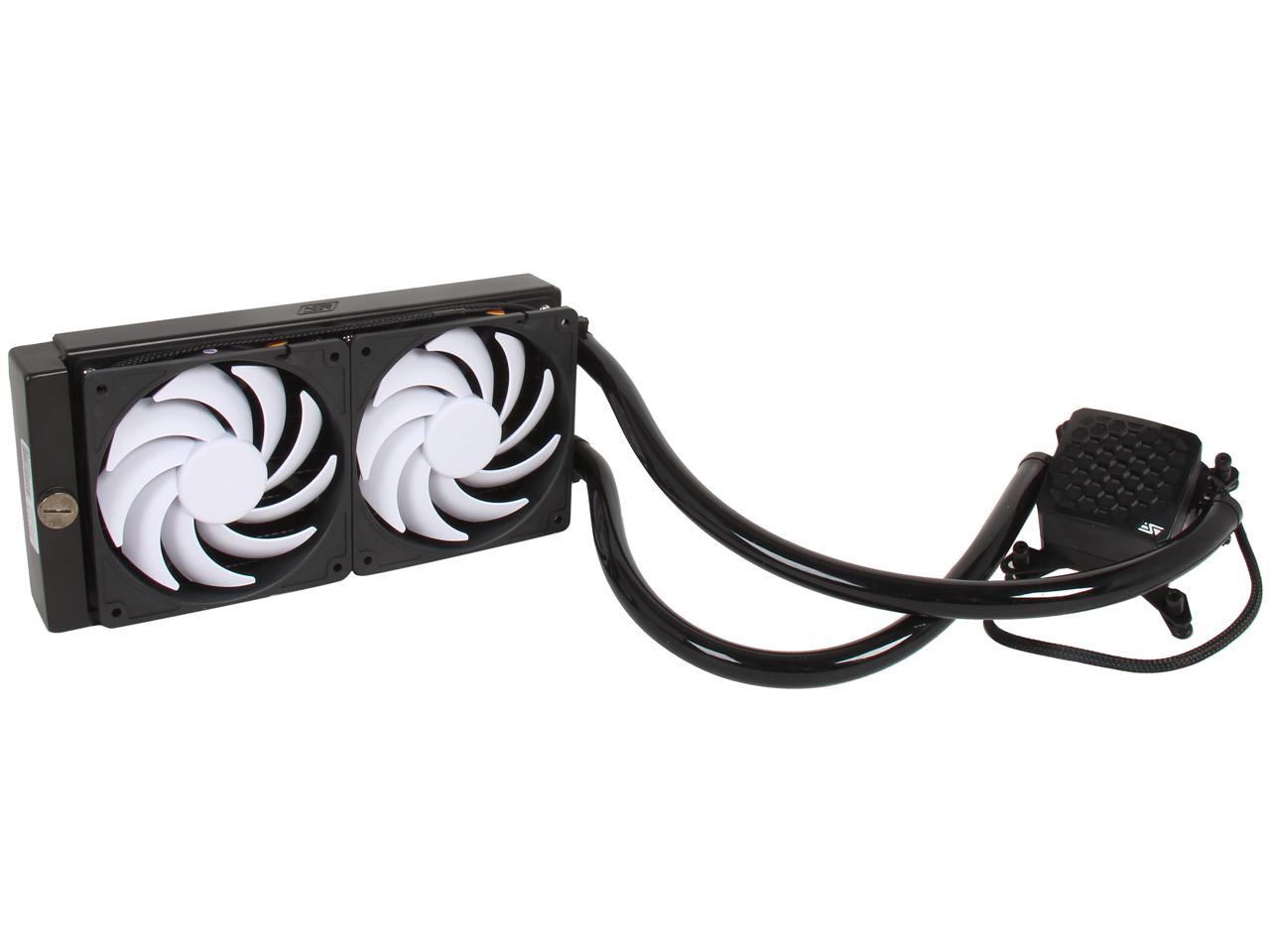 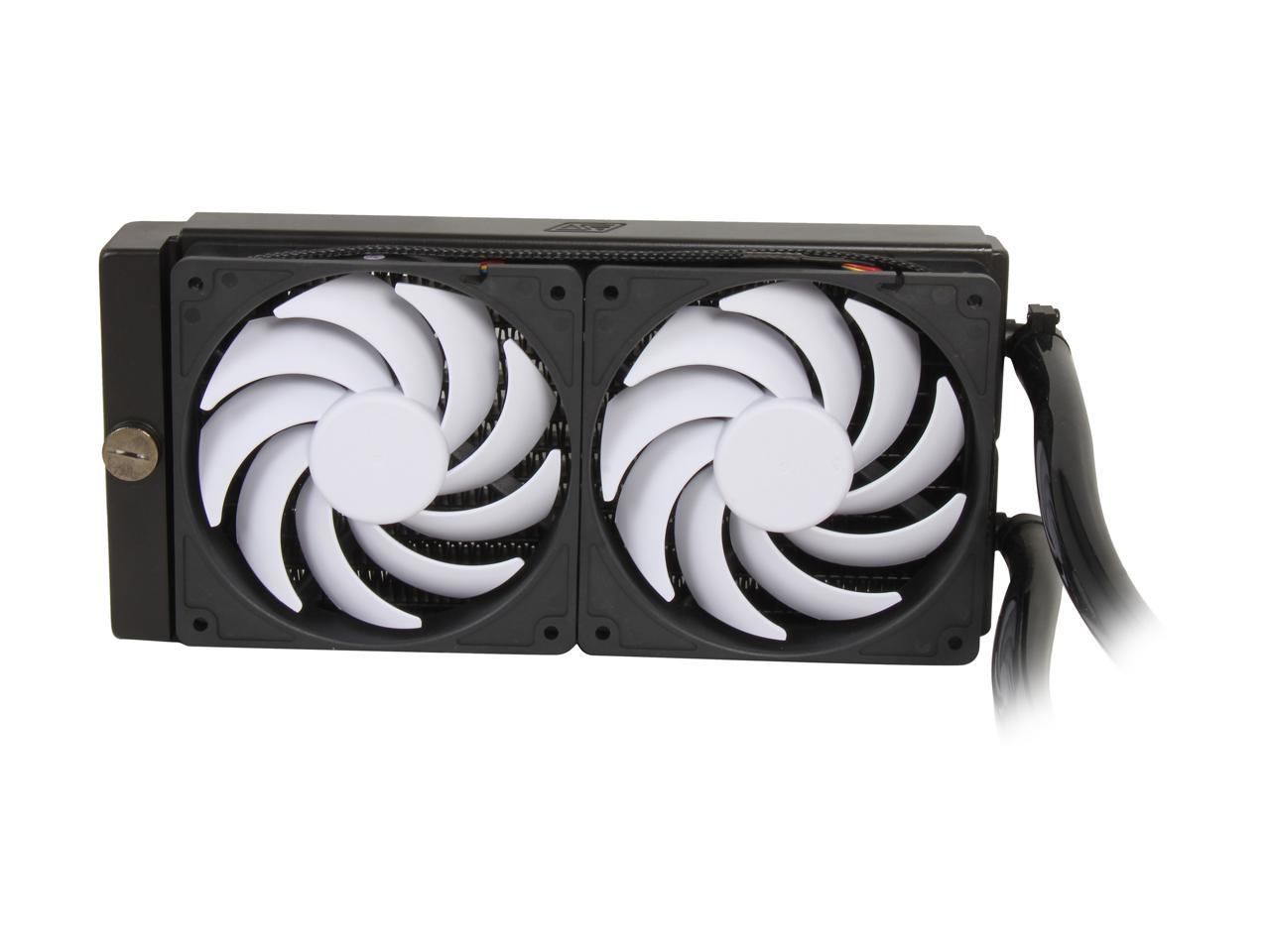 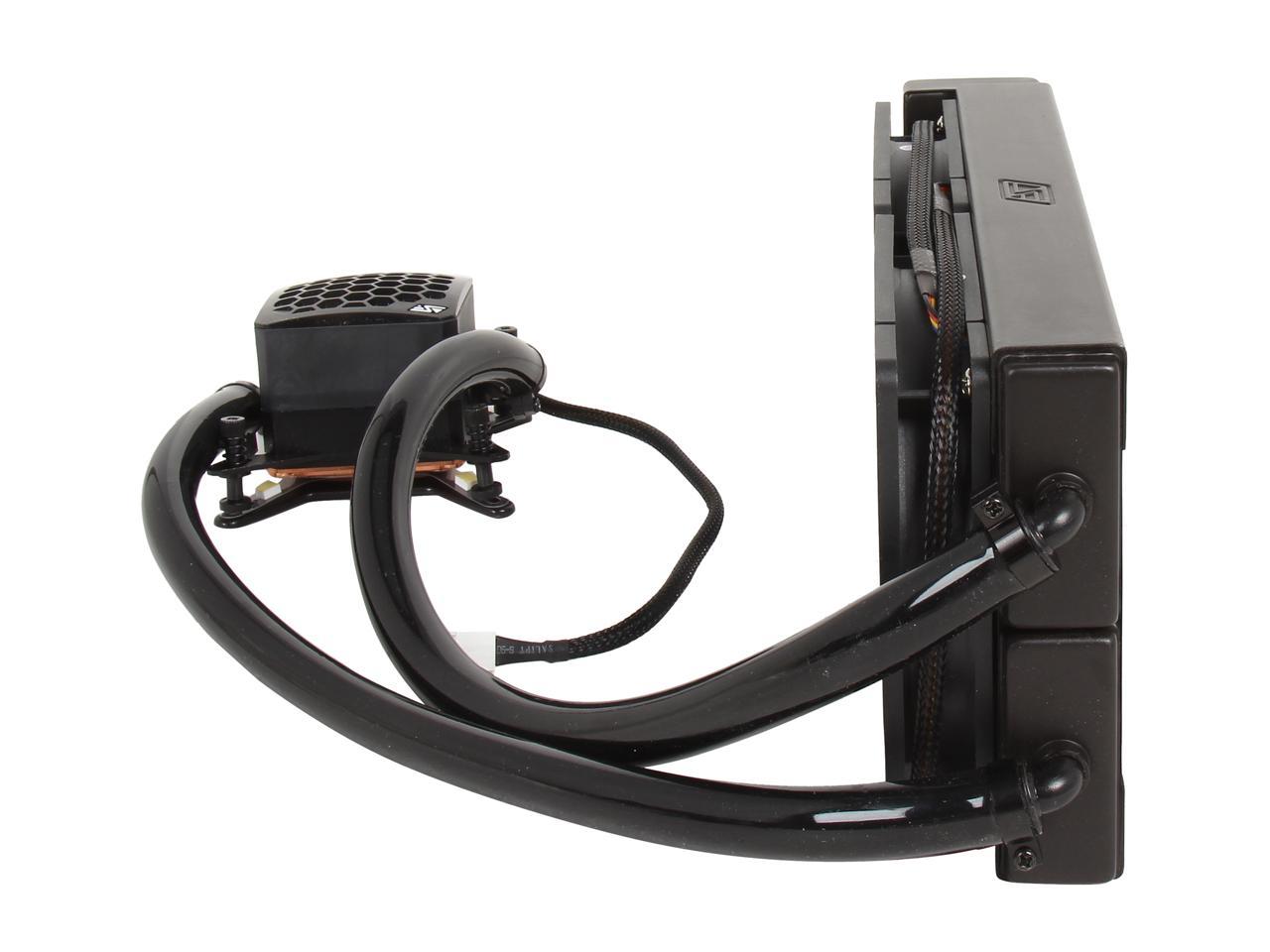 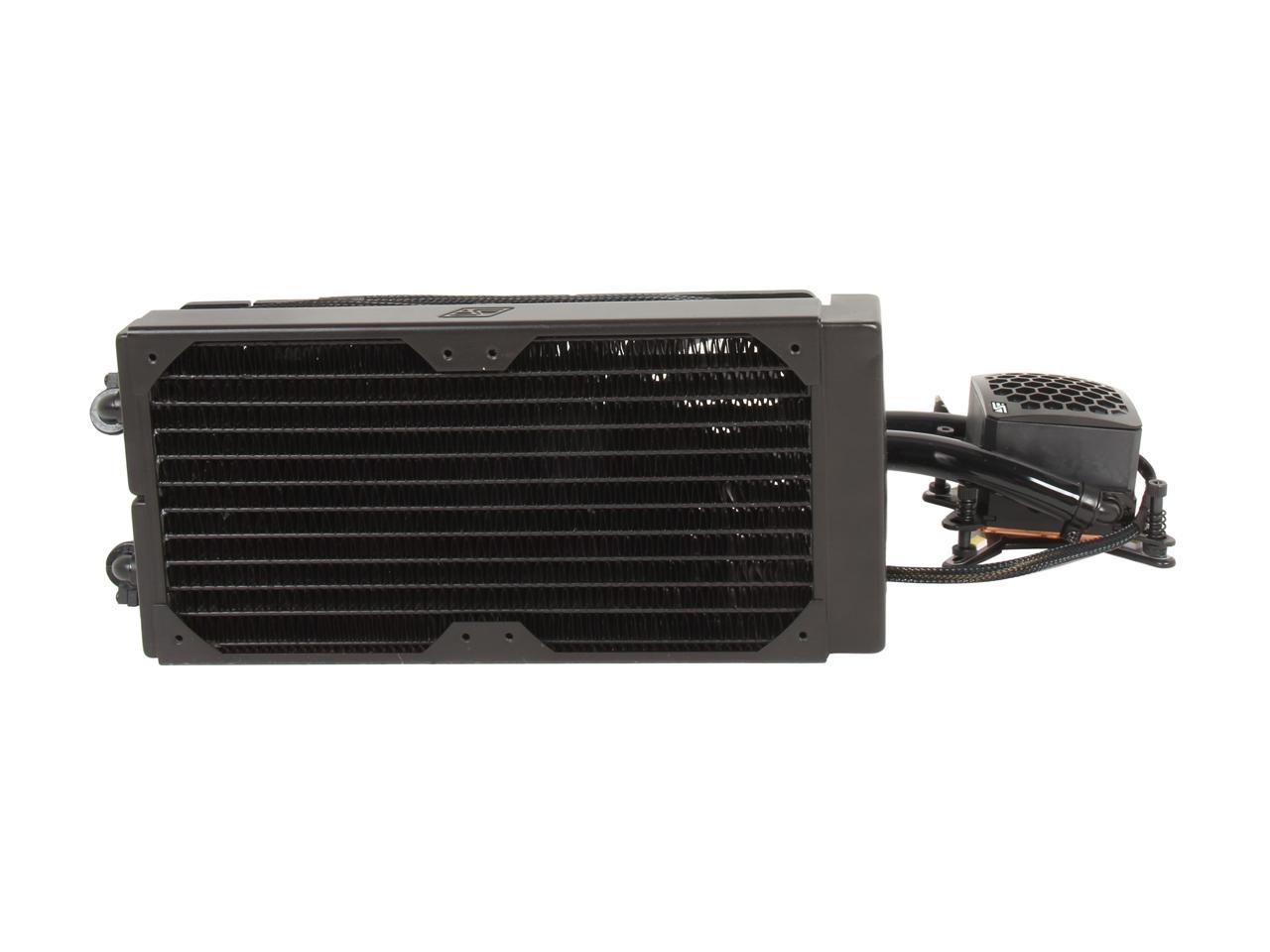 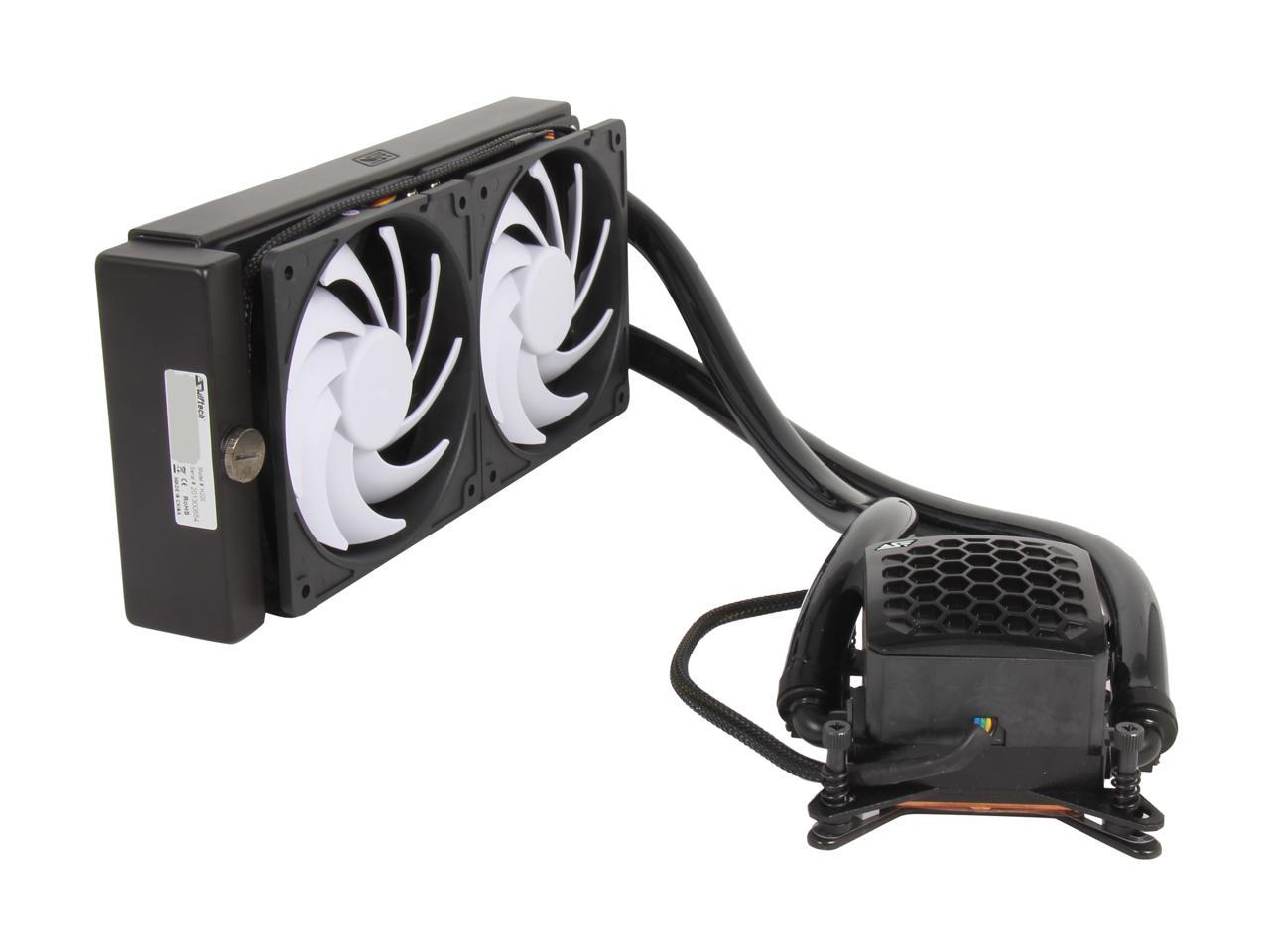 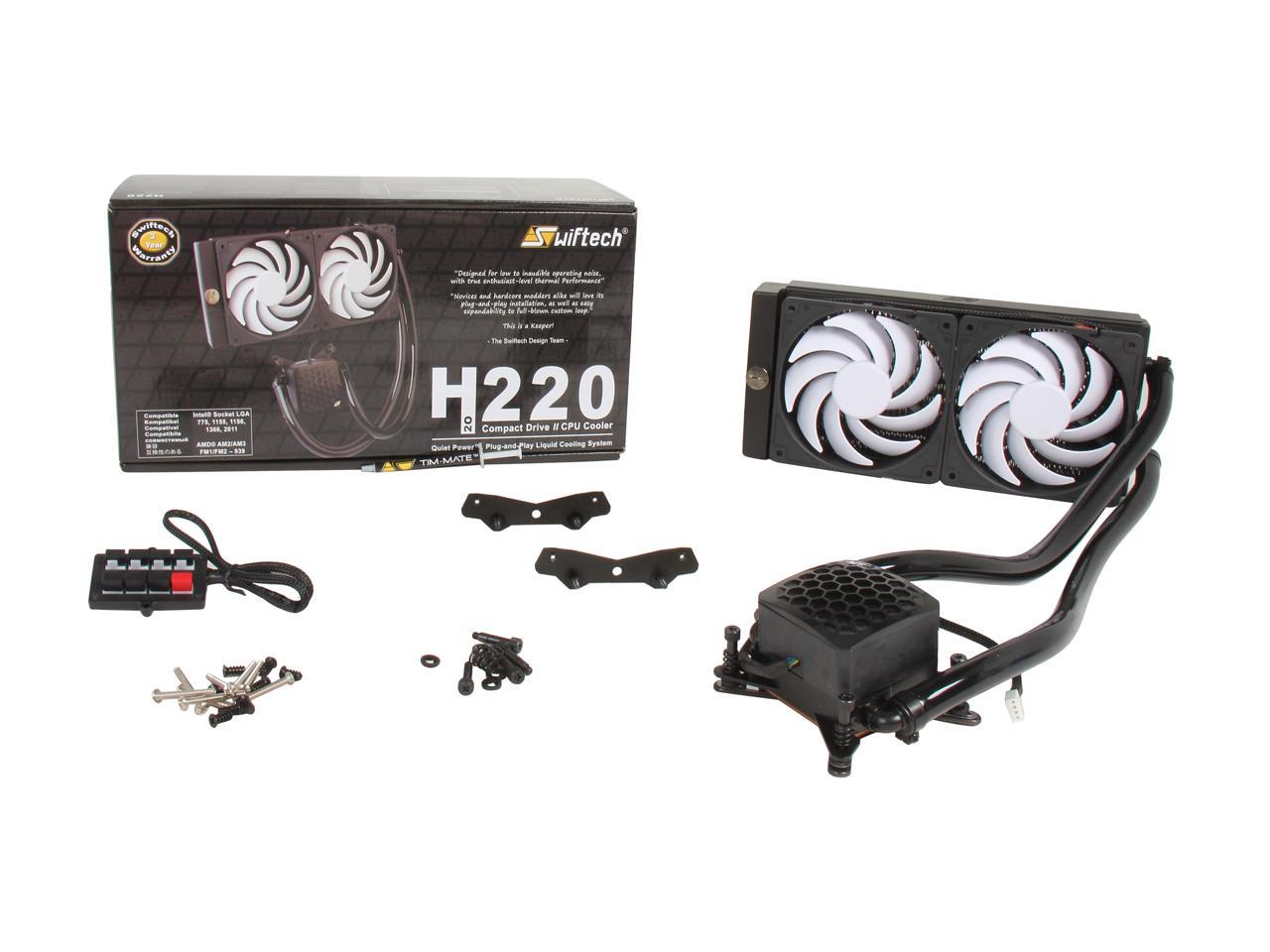 (38) Write a Review
OUT OF STOCK.
Overview
Specs
Reviews


The H220 CPU cooler is an all-in-one liquid cooling system focused on low to inaudible operating noise and a thermal performance that truly rivals custom kits. It's compatible with most cases supporting dual 120mm or larger radiators. The Swiftech H220 is factory pre-filled and completely plug-and-play - ready for installation.

Unlike conventional AIOs, the H220 CPU cooler supports additional liquid cooled components such as graphics cards, chipsets, and/or additional radiator(s) just like a custom-built system. Both the pump and the fans are PWM compliant devices, allowing the H220 to be recognized and speed-adjusted by the motherboard to reach the ideal temperature for the CPU. A PWM splitter is also included allowing connection of up to eight PWM devices.

Pros: Well let's see...this unit is in the right price range and with the ability to integrate other water blocks is a plus.

Cons: For AMD owners....if you populate all dimm slots you will run into the problem of the elbows on the water block not leaving you clearence....the solution to this problem is to rotate the water block 90 degrees so that the hoses of the water block are vertical....this requires grinding of the retension brackets so that the water block elbows will have the clearance needed for proper orientation ....perhaps swifttech will include revised brackets in the future for amd systems....also...whoever said that this thing is quiet must be hearing impaired...the coill whine of the pump is the most audible piece of hardware in my system.

Overall Review: If your just looking to water cool your cpu honestly i'd go with a H100 by corsair...as it looks now I'll have to go with a more costly custom water cooling loop....good try swiftech but your efforts need more validation.

Cons: upon arrival of my new h220, the pump had scratches and the faceplate was damaged. The radiator had scratches all over it as well. I contacted swiftech and they promptly sent me a new faceplate and I installed it immediately. My NEW h220 still had deep scratches, but I decided to not to RMA. A couple days later the pump started making an awful ticking noise. My entire case is filled with silent noctua fans so this is unacceptable. I contacted support and they sent me a copy pasta of a tutorial to remove air bubbles from the system. I followed the tutorial to no avail. I eventually had to RMA the unit. I received my "new" unit in 5-7 days. It looked like a refurbished unit as it had scratches on the copper plate and many of the fins of the radiator were bent. I had to carefully straighten the fins. I wasn't happy about the copper plate being scratched, so I sent them an email questioning the condition of the product. I got no reply after 2 weeks, so I re-sent the email, and still never got a response. I need my computer, so I decided to install this watercooler and to my surprise, this one makes a louder ticking noise! I once again attempted to clear the bubbles, but was unsuccessful. I now have to keep the pump at 45% power using speedfan just so I can endure the noise.

Overall Review: After one month, my first pump began emitting a rattling sound and a high pitched buzz that gradually intensified over a few days. I contacted Swiftech and they promptly replaced it with a refurbished pump. The second pump died abruptly after three months... My last Swiftech product (an MCW20 chipset cooler) sprung a leak that fried my system but I thought after six years they may have stepped up their game... it seems I was wrong.

Pros: 100% EXPANDABLE ... Also, it performs great as is for just the CPU and fits perfectly in the pre-drilled mounts on the HAF-X case.

Cons: Only 2x120mm fans so if you wish to run a push/pull system you have to either buy 2 more or mount it to existing case fans. (this was the case for me on my HAF-X)

Overall Review: I would recommend this system over all of its competition. Before choosing to buy this product, I tried the Antec 920 kuhler (which wasn't bad but didn't fit comfortably in the HAF-X), and the Corsair H110; both of which did not perform to the level of the Swiftech H220.

Pros: This is one of the most highly rated coolers to exist. It is known for it's quietness as well as cooling ability. It was so well-bought, it took weeks to get order a new one when it was sold out.

Cons: For whatever reason, the cooler didn't survive 3 days and it was dead. I had it RMA-returned for a new unit, but they said it was damaged and didn't qualify for RMA. After many years, this is my first faulty buy from Newegg and the return experience has been very bad.

Overall Review: I used to work as a PC tech and in retail. The most important thing is customer satisfaction and the fact I was just simply given back my faulty cooler is unbelievable. I spent a lot of money on the product and the least they could do is try to return the product or give me options; I got nothing and now I'm short of a cooler and they just kept my money. How is that fair?

Pros: none so far, reverting back to H100i till I get a replacement unit.

Overall Review: First H220 pump failed and I called swiftech. The service was swift and he immediately shipped a new H220. The second one works wonderfully!

Pros: The instructions are extremely thorough. One thing that I really liked about this is the combined rad/reservoir. I have the Switch 810 case and with a slight modification to the upper fan mount, I was actually able to place this so that the top of the radiator sat flush with the bottom of the recessed fan mount. This allowed me to keep my three cougar fans on top of the fan mount, attach the radiator, by way of screws provided in the kit, through the two back fans and then place the provided swiftech fans on the bottom of the radiator for a push/pull system. Obviously the air is flowing out of the case at the top which will help reduce any dust being caught in the radiator as all the intakes to my case have dust screens. I've yet to OC my processor yet (FX8350) as I want to get an idea of what it runs like under normal conditions but so far I've seen improved performance. While running Bioshock Infiinte on Max settings my CPU really never gets above 40 and while running Crisis 3 on max setting (medium on vsync) the CPU barely gets above mid 40's while before the H220 it was getting in the mid 50's. On top of the better cooling it is so much quieter now that I don't have that high RPM CPU fan kicking up every time my CPU gets under load. Even with having 11 case fans it's now alot quieter.

Cons: As with any AIO system installation can be interesting to do by yourself as you try to hold the waterblock while you hold the radiator up and install it. If only swiftech sent a third hand you could use while you installed this. All in all it wasn't that bad, same issue you would have with any AIO but the performance and options you get from this AIO beats out any other. Be wary that the fans come installed on the radiator in a pull set up (assuming the fill cap will face up). I should have checked it before installing everything. This mistake resulted in me having to flip these in my case (the CPU waterblock was already installed and I didn't want to remove it) which was another time it would have been nice to have 3 hands.

Overall Review: The con's I have really have nothing to do with the prodcut itself or what swiftech has done which is why I left it at 5 eggs. If your just getting into water cooling and could see yourself expanding loops later on as you add video cards and what not, I would highly recommend this system.