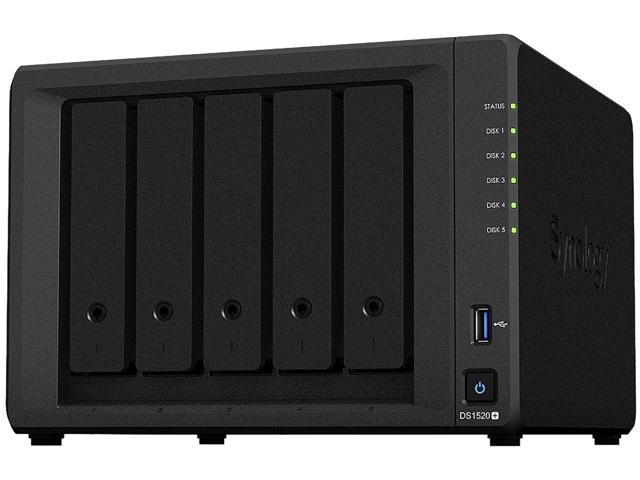 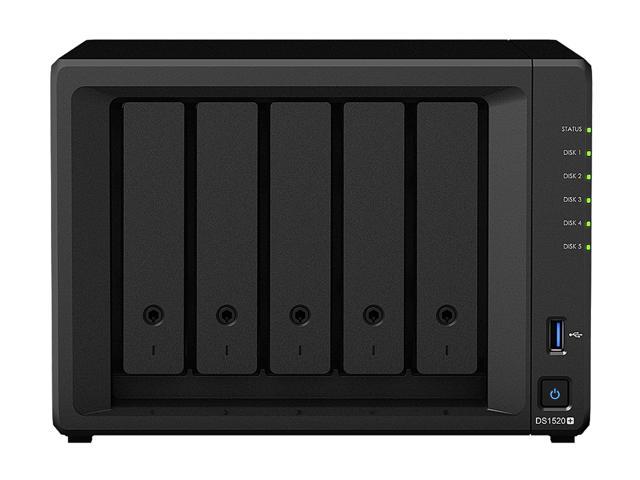 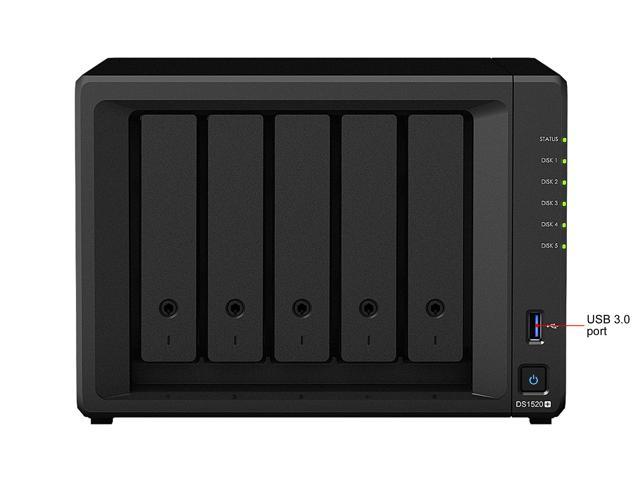 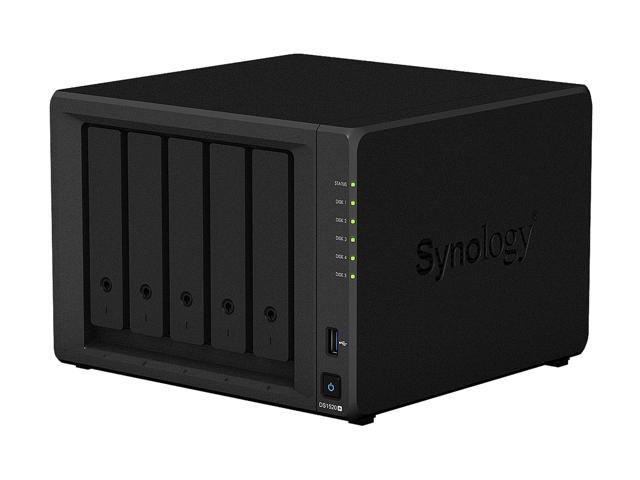 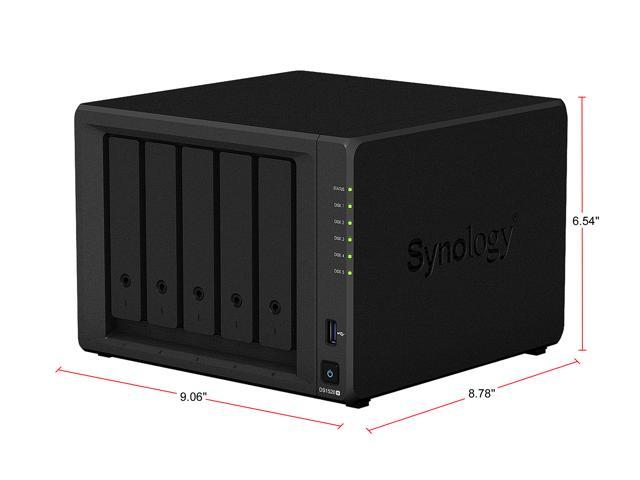 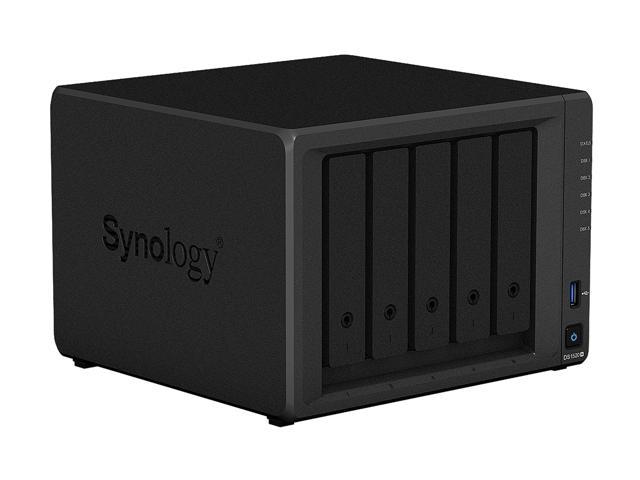 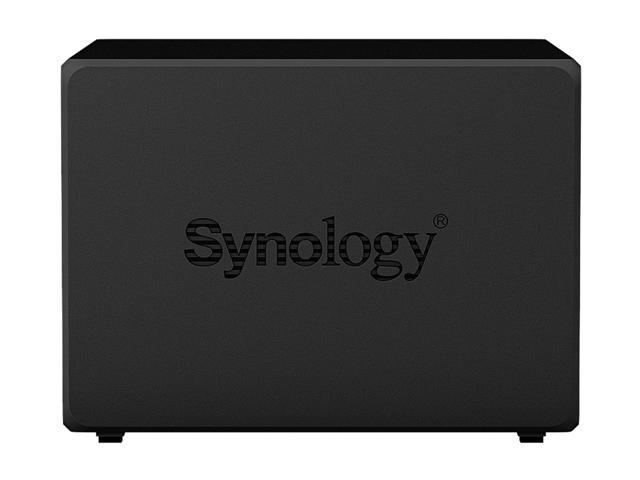 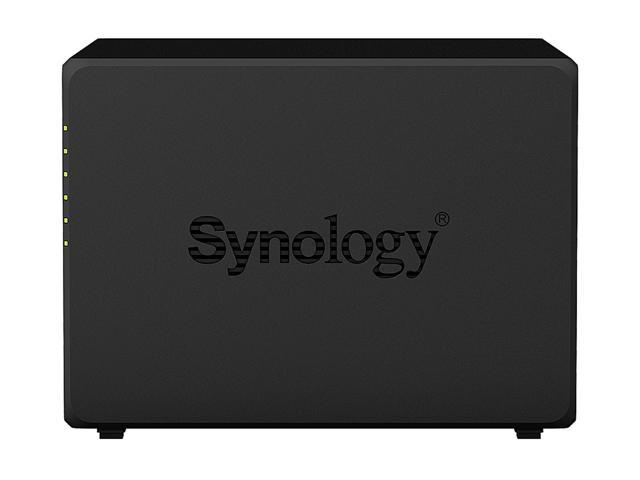 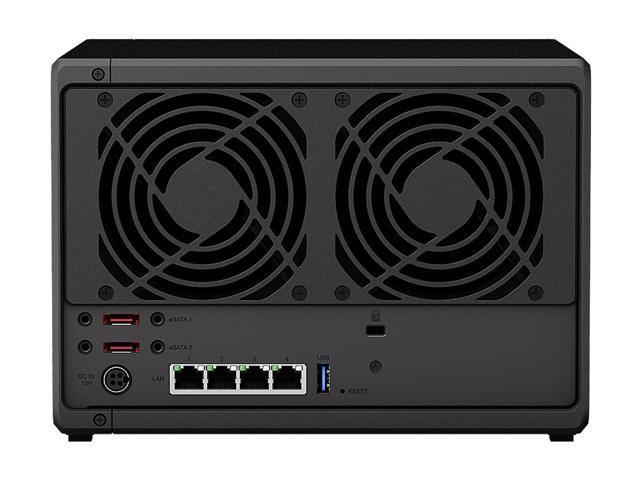 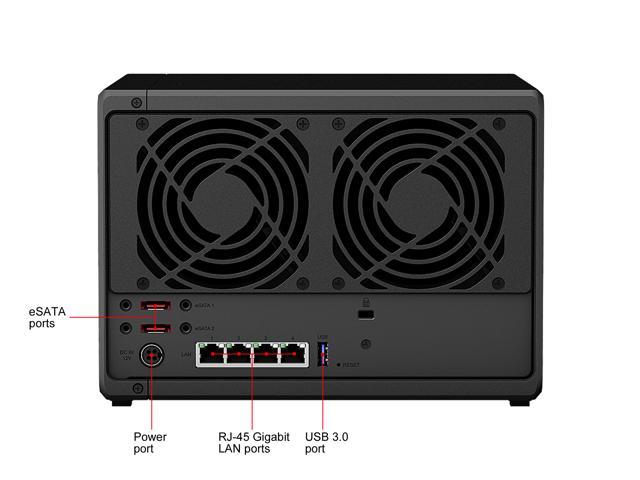 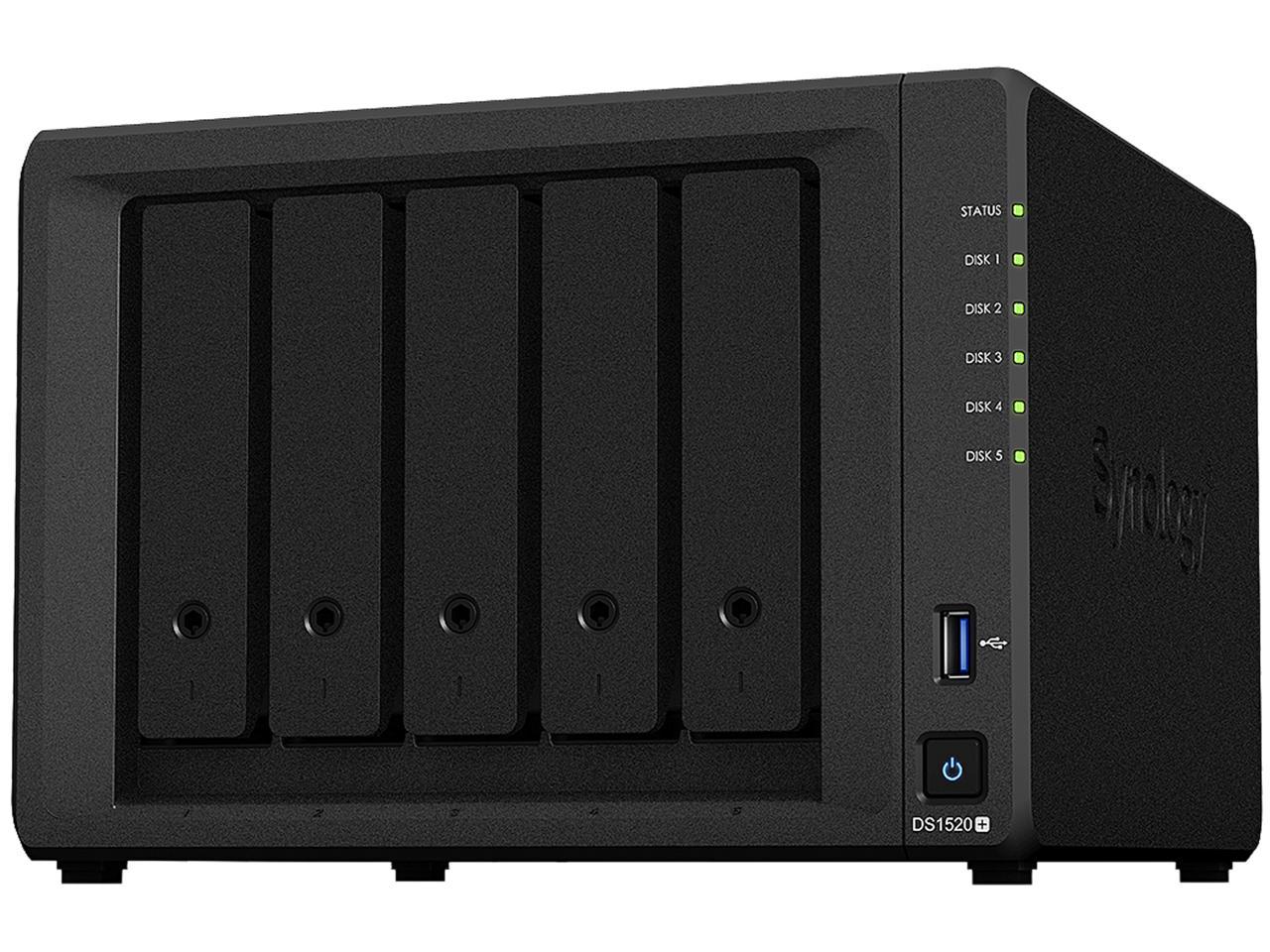 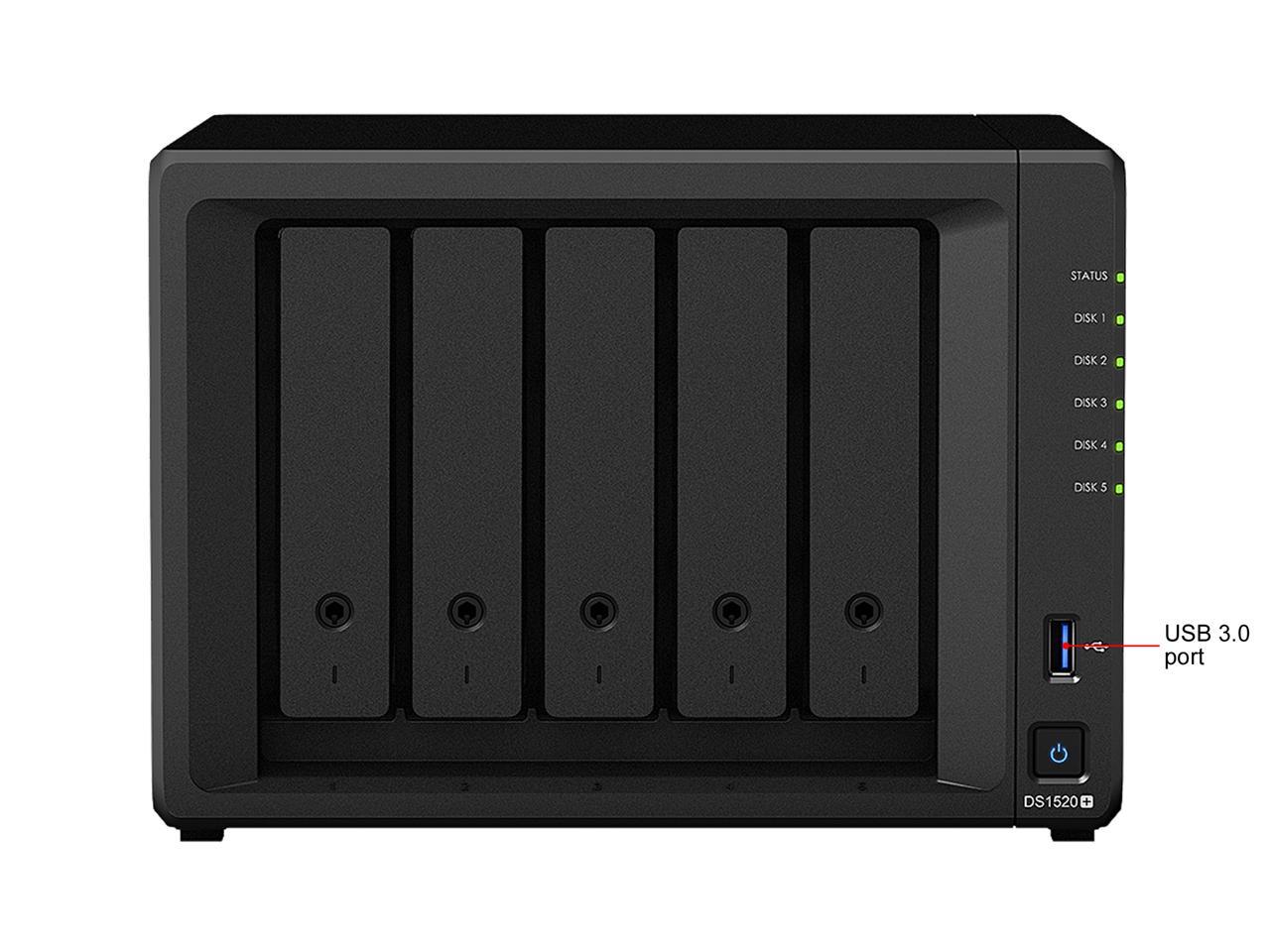 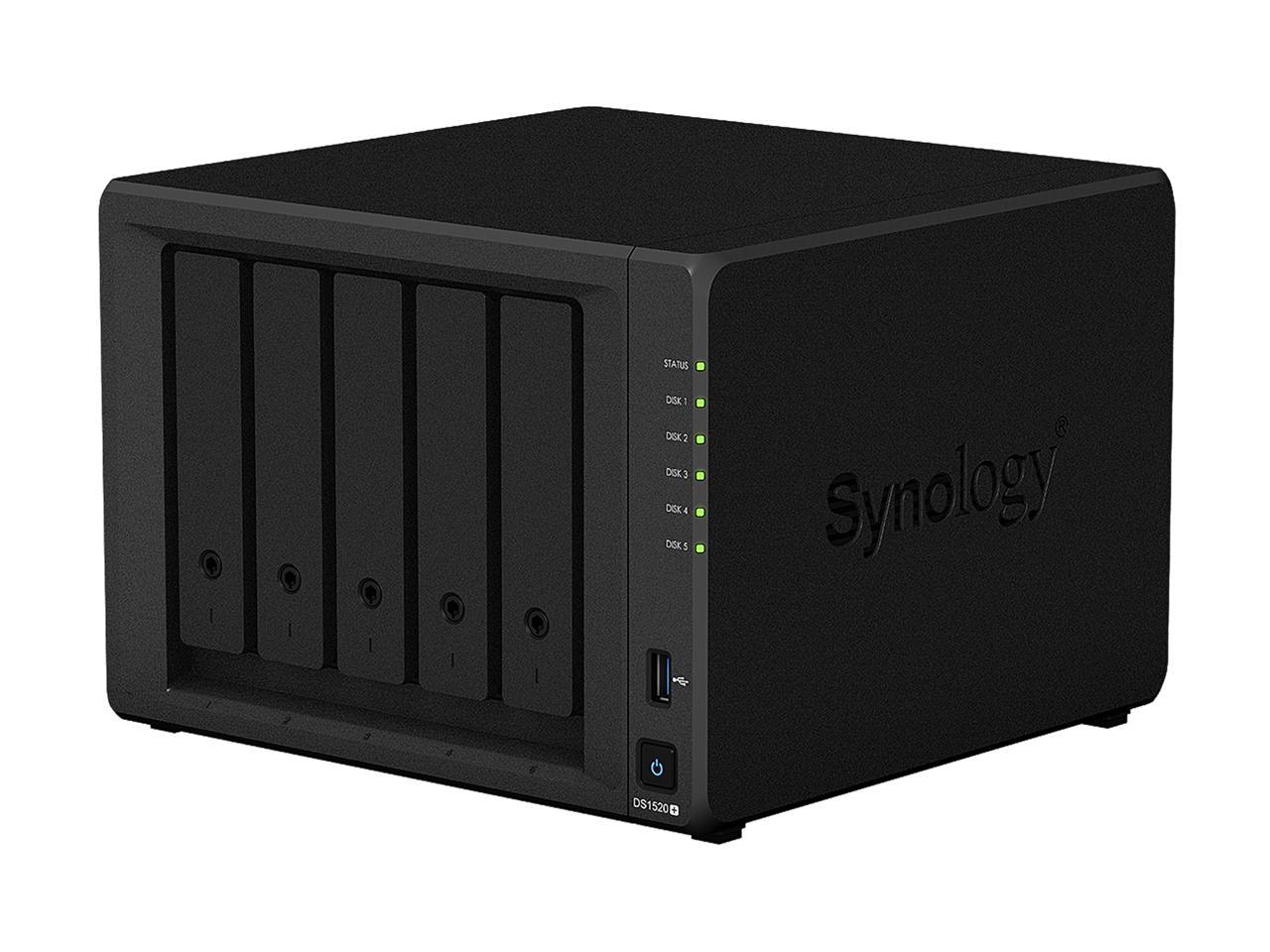 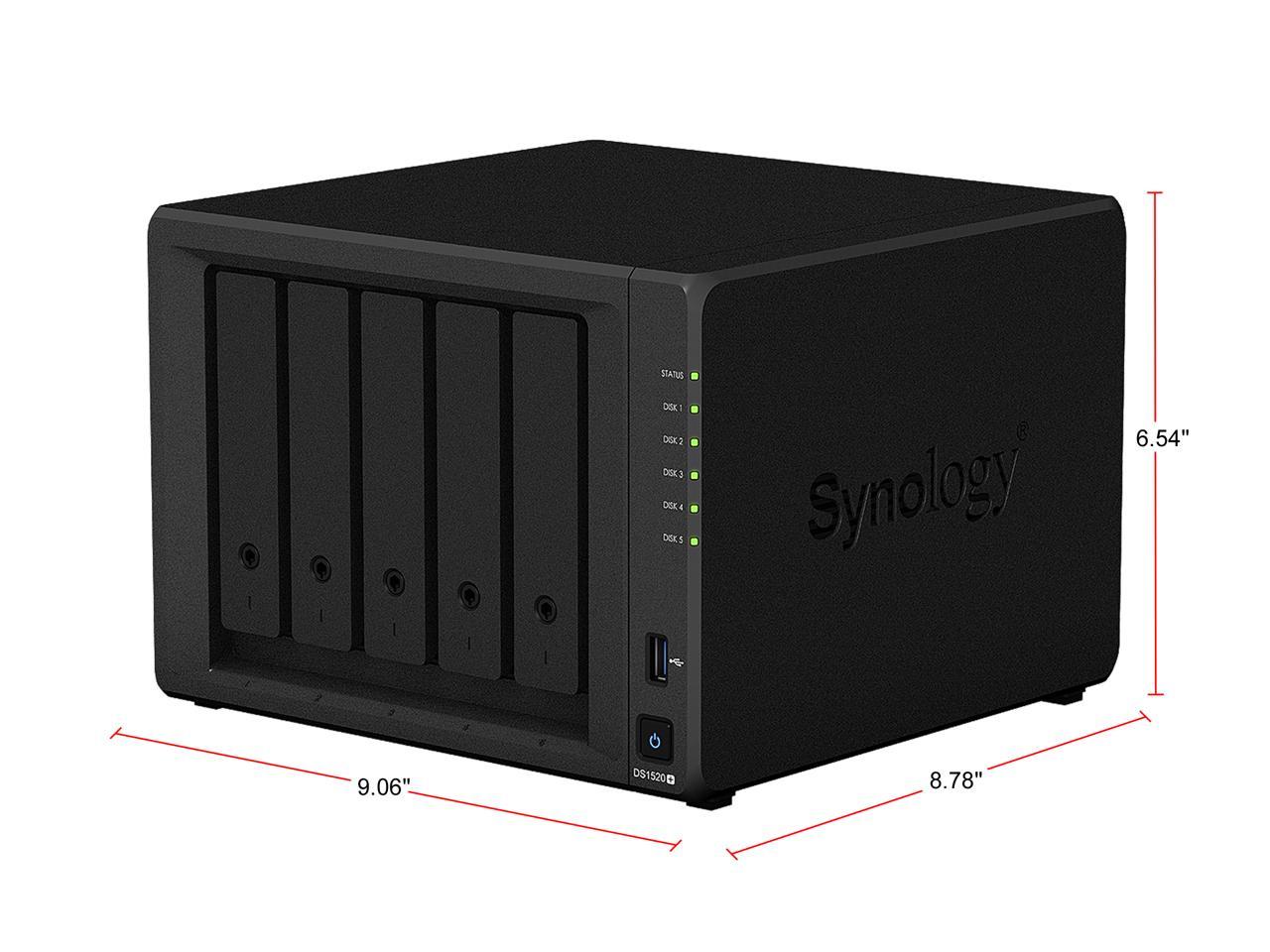 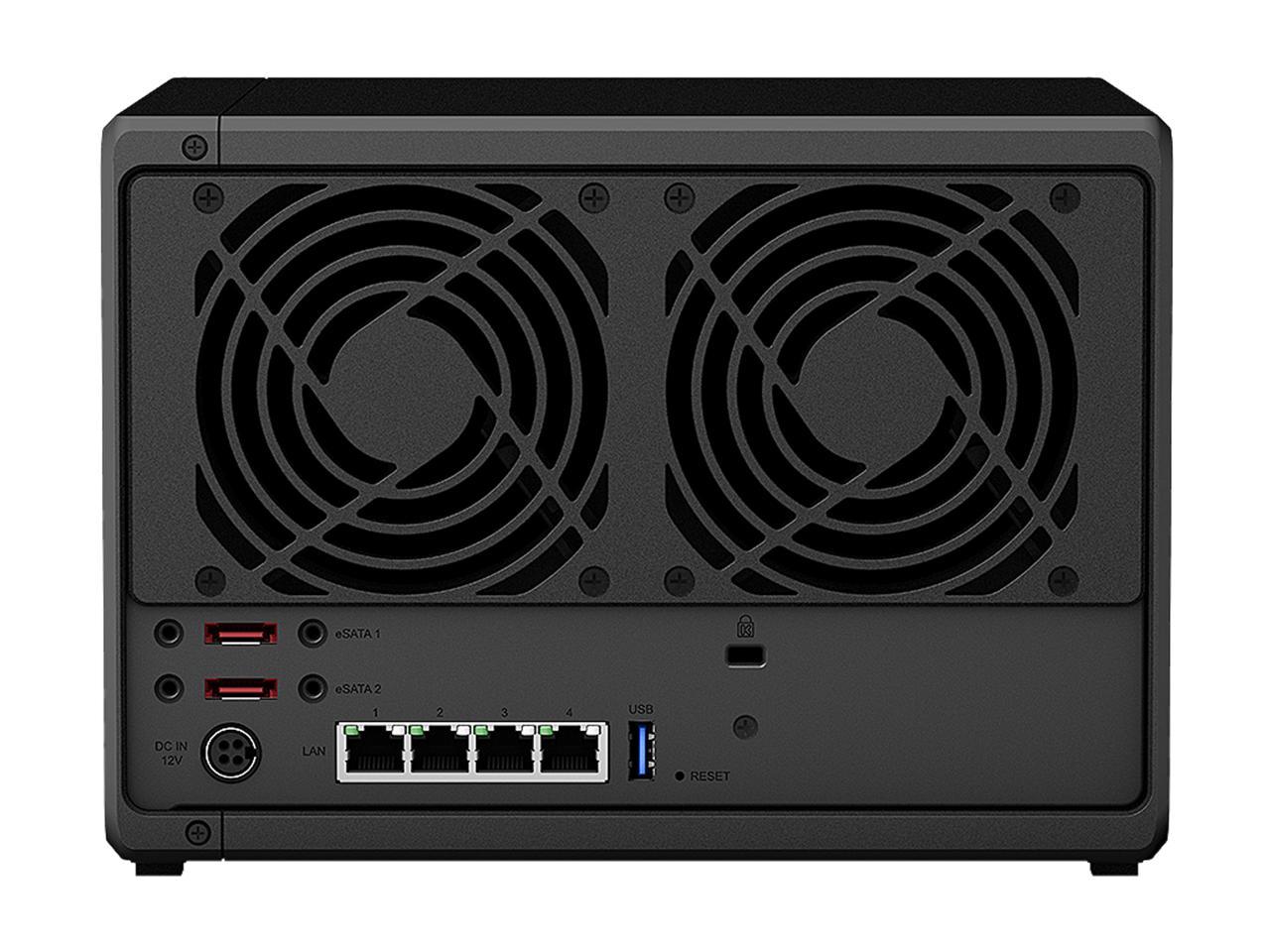 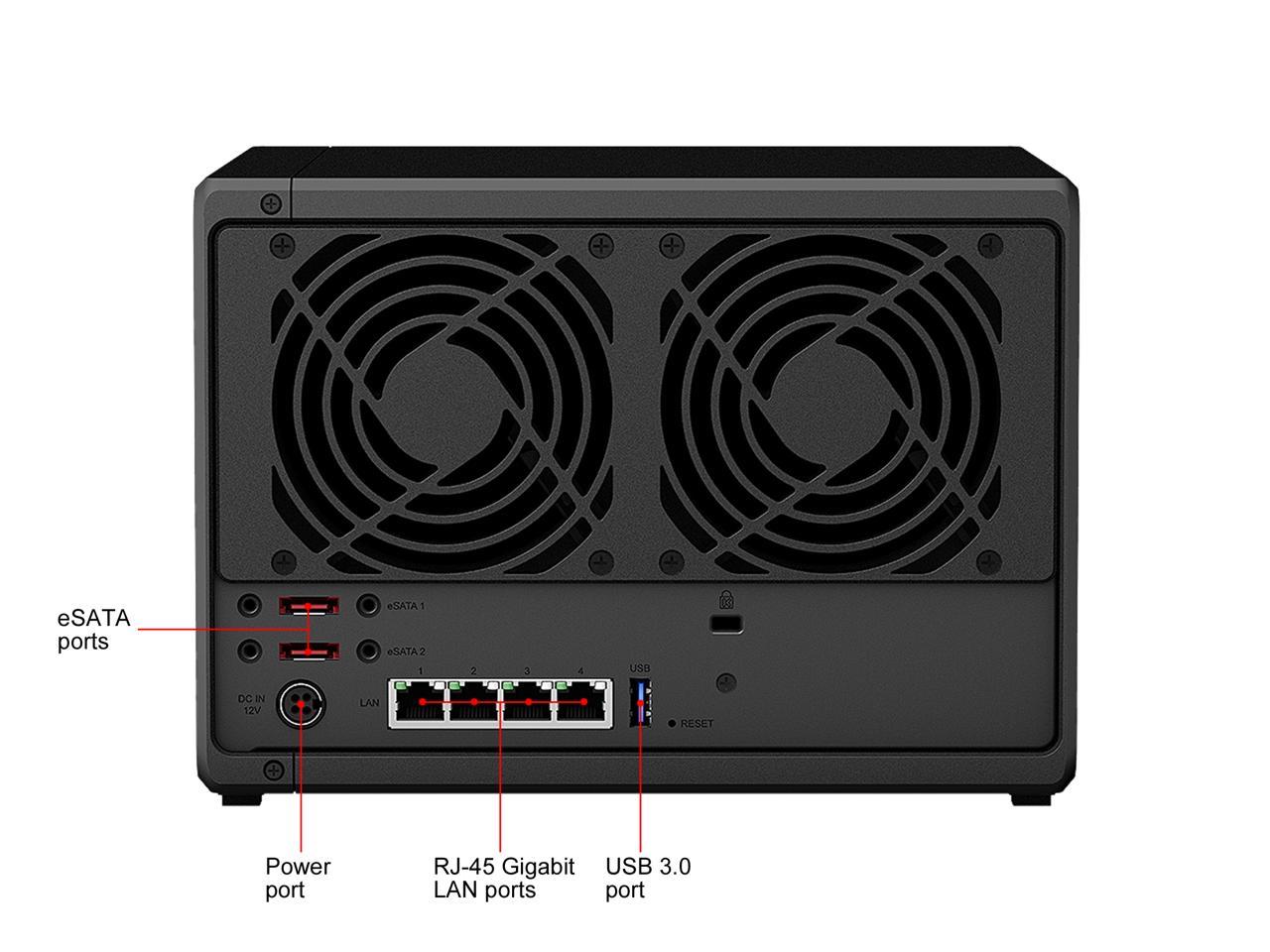 Suitable for small office and IT enthusiasts, this five-bay network attached storage solution offers a centralized, remotely accessible location to back up, protect and share your data. You can also collaborate with co-workers on the same online document, run and manage multiple virtual machines, and stream media to various devices — computers, smartphones, media players, and TVs — for non-stop, fun watching experience.

Expand up to 15 drives with a DX517 expansion unit

* Performance figures are based on the average percentage improvement of DS1520+ relative to its predecessor, as tested at Synology labs. Test items include file indexing in Synology Drive and photo indexing in Moments. Synology Drive provides a built-in universal portal to access your data anytime and anywhere, and synchronize all your files across platforms, including Windows, macOS, Linux, Android, and iOS.

Real-time collaboration on your private cloud

Synology Office is a collaboration package combining the convenience and usability of public clouds with the data privacy and security guaranteed by private clouds. It allows you to work seamlessly together on documents and spreadsheets in a protected environment. Virtual Machine Manager enables you to test new software in sandboxes, isolate your customers' machines, and increase the flexibility of your server. You can easily run Windows, Linux, and Virtual DSM on your Synology NAS by just a few steps.

Perfectly clone and restore a virtual machine within seconds.

Seamlessly migrate Virtual DSM instances from a Synology NAS to another.

Simplified backup solution for your Mac, PC, and mobile devices. Pros: Better firmware and OS than WD Ex2 Ultra Faster read/write speeds even with HDD instead of SSD when compared to WD Ex2 Ultra Adjustable LED Light & ability to schedule the light to only power off at night Easy connectability, and many options to stay connected to your device

Overall Review: I had an incredibly hard time with Western Digital's My Cloud Ex2 Ultra, and their firmware was nightmarish. I had constant errors with the most simple task like detecting HDD temperatures. At first I was put off by the price tag on the DS920 but I figured they must be doing something right judging by the reviews, and boy was I pleasantly surprised. The setup was simple and the interface is reminiscent of Windows OS, making it a breeze to learn how and where to find things. Everything about this system is faster and more streamlined than WD's My Cloud Ex2 Ultra, and honestly, WD should be ashamed of their pathetic NAS product lines in comparison. I used SSD's in my WD system, but when I bought the DS920 I decided to save my SSD's and use Toshiba's N300 HDD's. Ironically, the DS920 still verified the HDD's faster than the Ex2 Ultra could with SSD's. The DS920 even writes and reads to these HDD's faster than the Ex2 Ultra could with SSD's. It simply blows WD out of the water. I did upgrade the cache in the DS920, but still. So much happier with Synology.

Pros: Embracing our digital content creation revolution, this unit expanded my workstations ability to save and hoard my precious data.. I create digital content and i wanted to ensure my work would be safe in my own personal home server... I highly recommend this for our digital future...

Cons: Take the time to learn it's complex system functions and configurations, not really a con but tip

Overall Review: I would recommend anyone get this device for home or light business use

Pros: - Easy to install HDs - SHR, synology's version of RAID that can make the most of different HD sizes - So many features and add ons - 4x 1GB network ports

Overall Review: This is a great little device. I'm basically running my own better versions of Dropbox, Netflix, Google Docs in my basement.

Cons: One negative I have is that I didn't buy a bigger one so RAID would work, but costs and all that.. The other negative is that Synology doesn't provide some easy app for copying data from other brand NASs. Yes, you can mount a network drive in the interface and then start a copy, I don't know if it has any error checking and 12TB is a LOT of chances for data to corrupt. Rsync, while effective after hours of figuring out how to get it running in the background on my old WDs, is slow as sin compared to a simple copy via their browserOS. I just wish I knew if the data made it intact like rsync does.

Overall Review: I bought this unit for household media storage. That's it. No internet, no anything else, because WD went and borked their MyCloud with internet only functionality. Side note: Whoever at WD decided that would be good, must have been dropped on their heads...But this thing can do so much more. I probably overbought by getting this model instead of the DSj, but dang. It's fast, it doesn't get bogged down in the middle of file transfers, and it just keeps running. You can add servers, like Web, git, mail, backup, and cloud sync, all through their package "store". These are awesome abilities, but as I don't want my data to be web-facing, I'm not going to use any of them. Well, maybe the local backup.Their interface, for those not used to "remote desktops," will find its operation odd at first. It's literally completely administered through its web page interface as if you're running a desktop on your browser. You install/remove app packages through it, check logs, control panel, etc. Its file manager app even supports drag and drop in-browser, although I prefer direct NFS/SMB connections. You can even plug in external USB drives, mount them and use them to transfer data if need be. Because I bought big enough drives, I have not experimented to see if the external USB drives plugged in can be shared. Given their interface, I'm pretty sure they can.Web support is robust, just start your googles with "Synology" and the answer is almost always quick to find.It's refreshing and made me wonder why I hadn't gotten one sooner. Oh yeah, the cost. the device itself isn't horrendous, but the NAS hard drives certainly start to rack up the $$ pretty fast. When you're looking at $300 for device and an additional $400-600 for NAS drives, it's easy to see why many, including me, chose the WD MyClouds option originally. Yes, I know, they had junk drives comparatively. I must have been lucky, in 7 years I haven't lost even one.Setup is easy, but drives HAVE to be installed before it will even set up the device. At least they did on mine. Kept saying I had to install drives to continue setup. So to those who said to do the updating before drives are installed, I'm not sure what you were doing. You basically snap the drives into their carriers, stick the carriers in the frame, boot, add them to a group and let it spend the next 48 hours parity checking them. Good greenhorn test for the drives, TBH. Yes, you can do stuff while it's checking, but file transfers are obviously slowed down.TL;DR: Powerful storage/lightweight server. Even has expandable RAM if you need to run more intensive apps. I heartily recommend them if you have the $$, but may I suggest that if your data isn't backed up elsewhere, just spend the extra for the 4-slot model if you have over 8TB of data, otherwise you're going to be using JBOD and playing roulette with said data.

Pros: Nicely packed Works just as advertised Easy to set up I’m still leaning how to use my Synology NAS, but I’m loving it so far I love the amount of extra apps available

Overall Review: I must say I was a bit worried about getting this after reading reviews that it was complicated. This is not the case in my opinion. This is an amazing product!

Pros: Initial Setup is Stupid Easy. Hardware is well-built and packaged - has a premium feel. Synology software interface seems well-designed and easy to use. Upgrading volume size with larger drives is a piece of cake - remove smaller drive, replace with larger drive, click "repair". Easy-peasy. No need to power down and totally tool-less.

Cons: While it's easy to replace/upgrade drives, the "repair" process, takes quite a while (20+ hours) and the software doesn't really adequately warn you about this IMHO. - I first thought mine was malfunctioning because it was going so slow. The system is fully functional during this period with no noticeable slow-downs, but you'll have to wait until it's done to replace/upgrade another drive, so plan accordingly.

Overall Review: I'm running a Plex server on the unit primarily right now, but planning on also loading up old digitized (from tape) family videos and new modern (iPhone etc) photos/videos and hosting so that extended family has online central repository to view and download/upload. I'm finding ways to fill the storage much more quickly than I expected. Started with (4) 4tb drives, then replaced (2) of the 4tb drives with 8tb and added a 5th 8tb. Now, I've ordered a dx517 5-bay expansion unit and an additional (3) 12tb drives - all this and I haven't even owned it a month! I am very happy with the unit so far and would give the DS1520+ my highest recommendation!

Cons: Expensive but you get what you pay for

Overall Review: The DS920+ is an awesome NAS. I coupled mine with the DX517 expansion unit because I wanted the horsepower of the DS920+ with the expandability of the 1618. While rather expensive, I couldn't be happier in the end. I have decommissioned all my other (toy) NAS / DAS units. My media collection has been consolidated and extended to my Android TV. I have DNS over TLS and DHCP running in a Docker container to keep big brother at bay. An Ubuntu VM hosts Parrot Sphinx with Ralink USB Wi-Fi adapter bound to it for supporting my software development efforts. Expanding the RAM is a breeze. Match the speed / specs of the soldered 4GB NANDs and you can comfortably add an additional 16GB. I've been running with 20GB for about a month now with zero issues. I started with a RAID-5 array of 4 4TB WD Reds. I added the dx517 and pieced together an assortment of drives on it with varying capacity to create an SHR-2 array. I then broke the original RAID-5 array and added those drives to the new SHR-2 array. Then over the next couple weeks I swapped out the lower capacity drives I threw together to make the SHR-2 array with bigger drives to raise my total usable storage to about 22 TB. Love love love this thing!

Pros: - A lot of packages and information, very easy to use and configure

Overall Review: I added two disks of 4TB in raid 1 configuration and some memory. Now I'm running Pi Hole, Moments, Survellance Station, Plex and GitLab in the NAS, it's really a small and capable server.