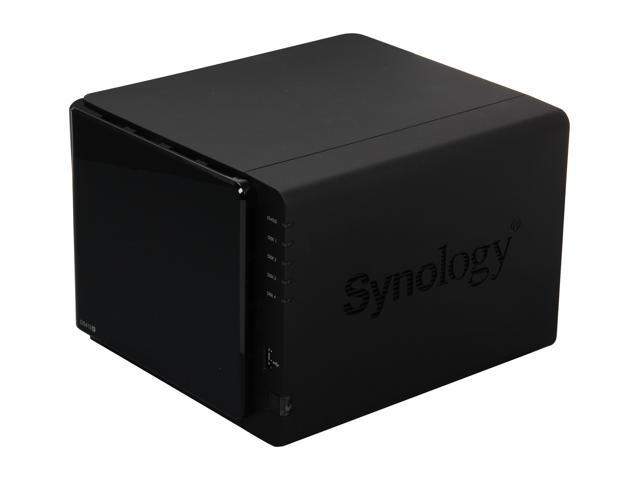 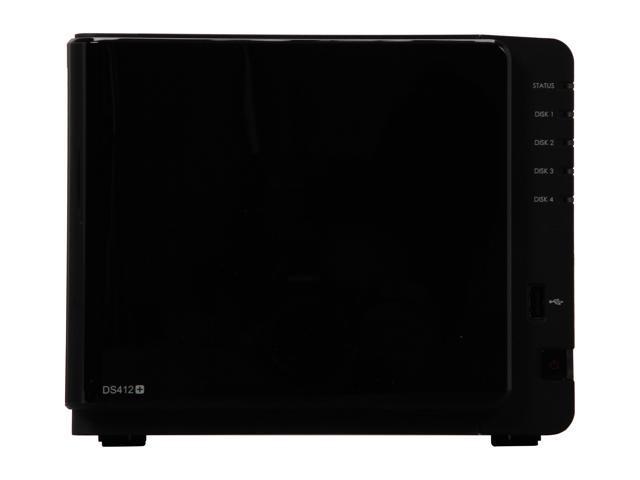 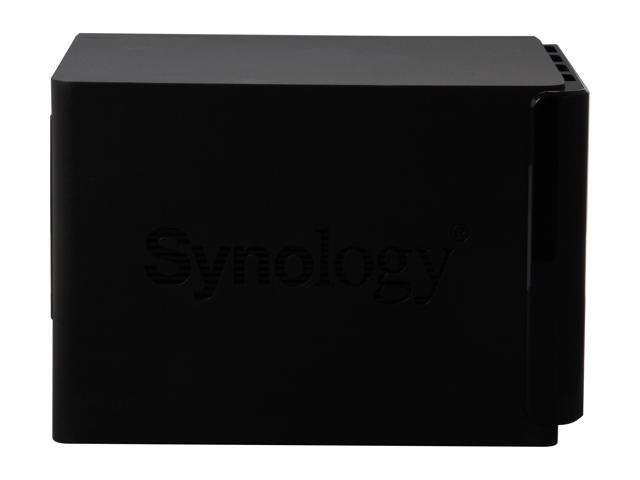 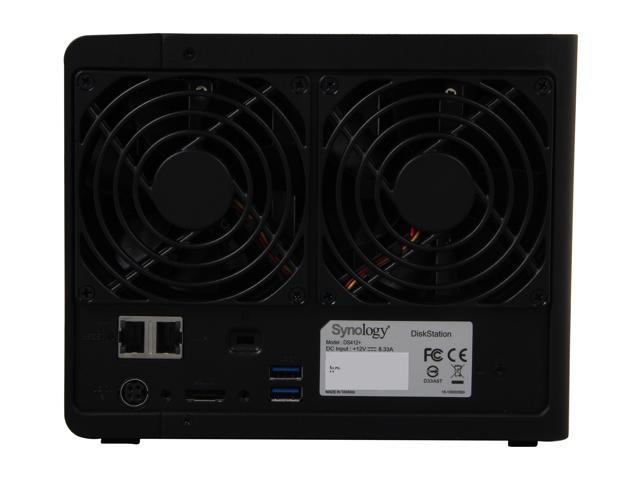 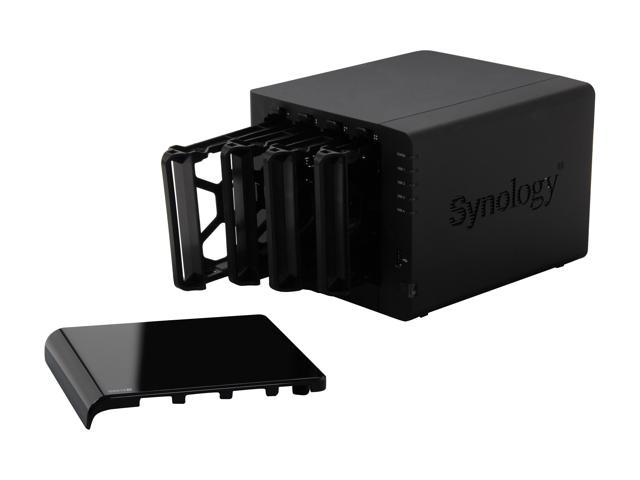 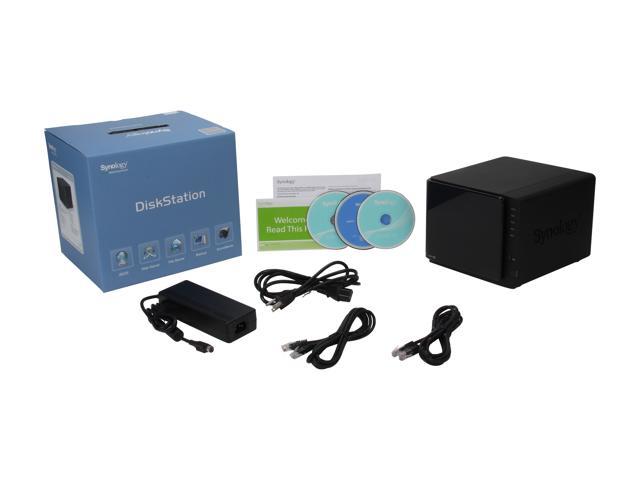 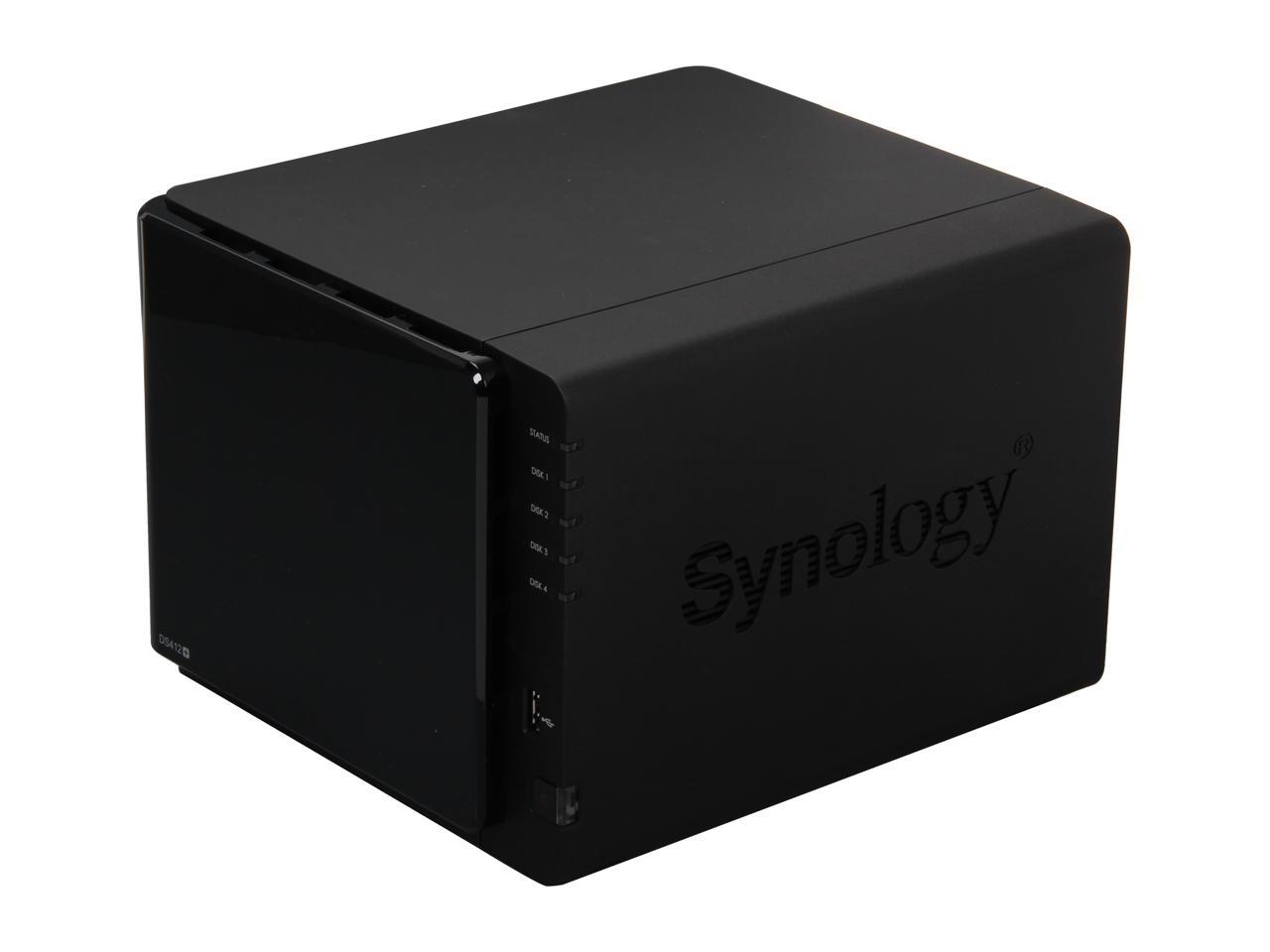 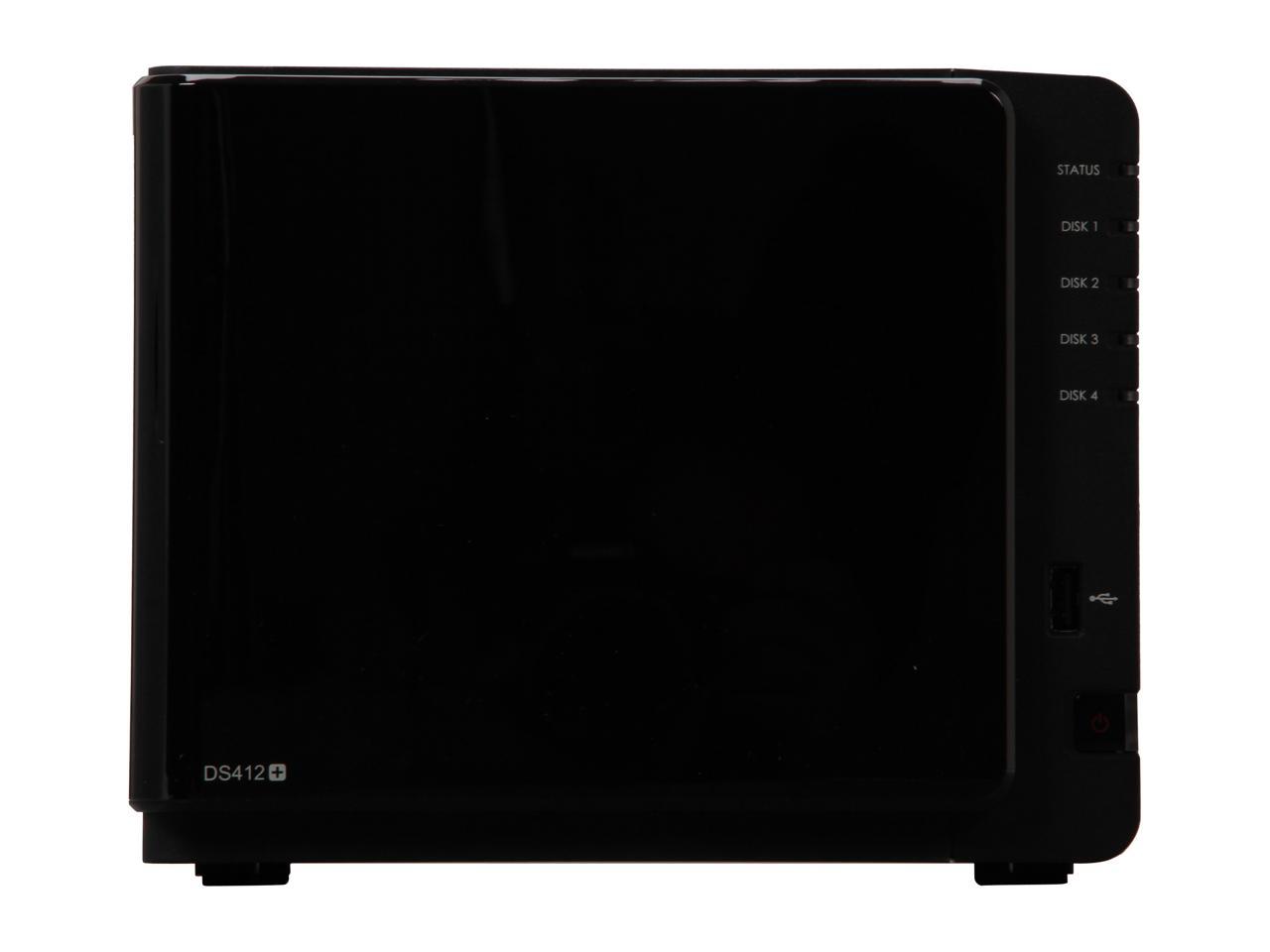 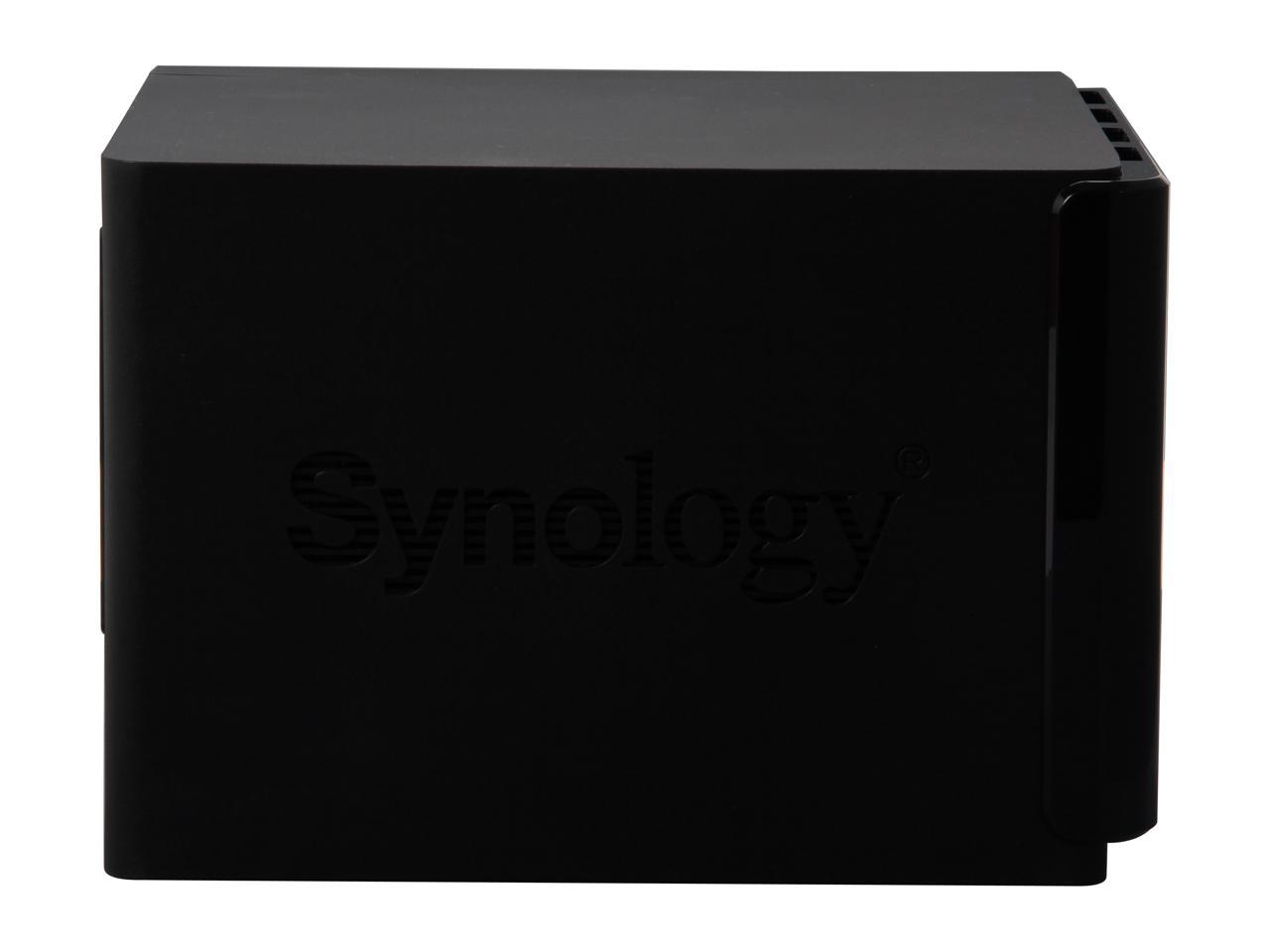 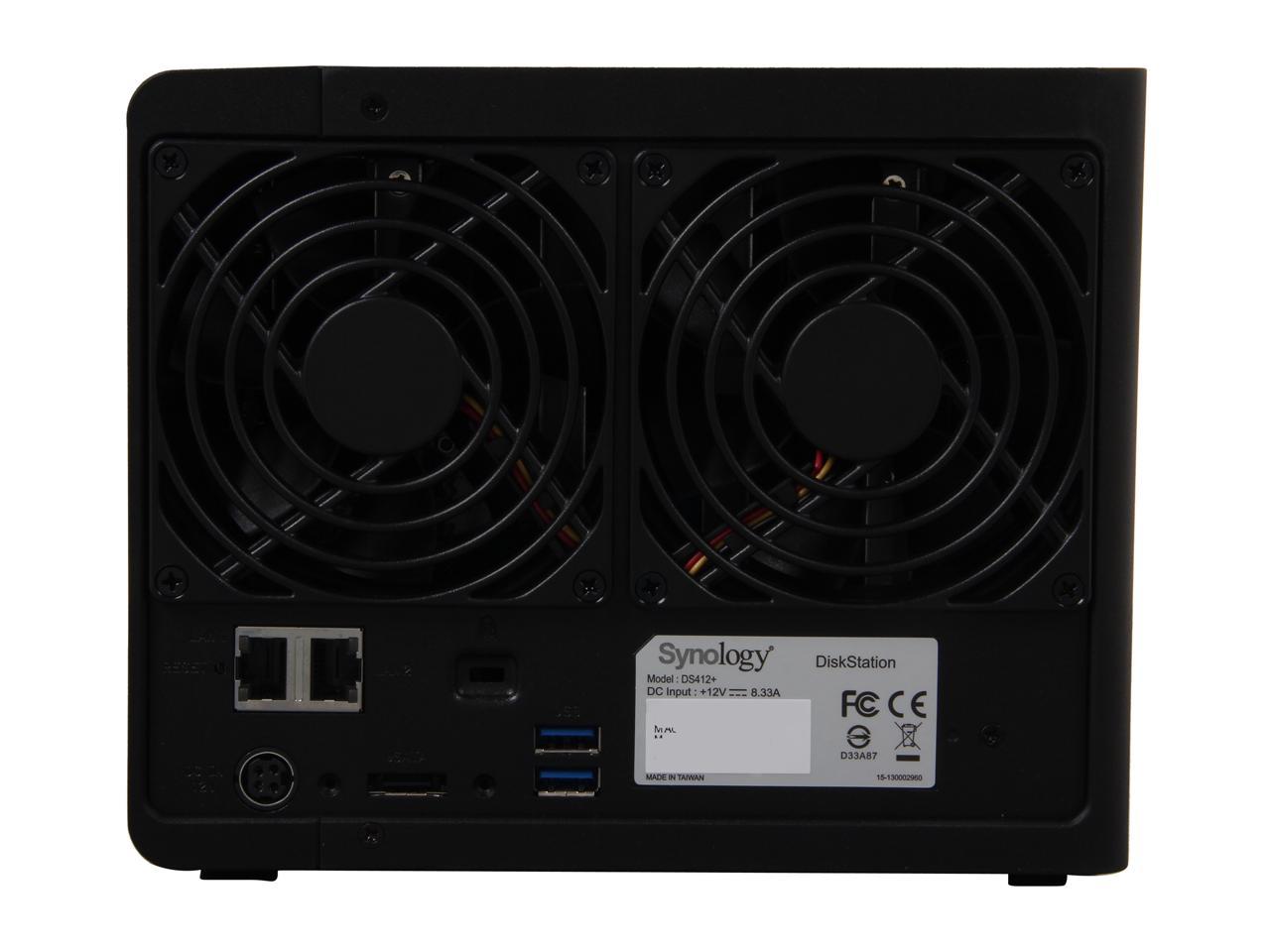 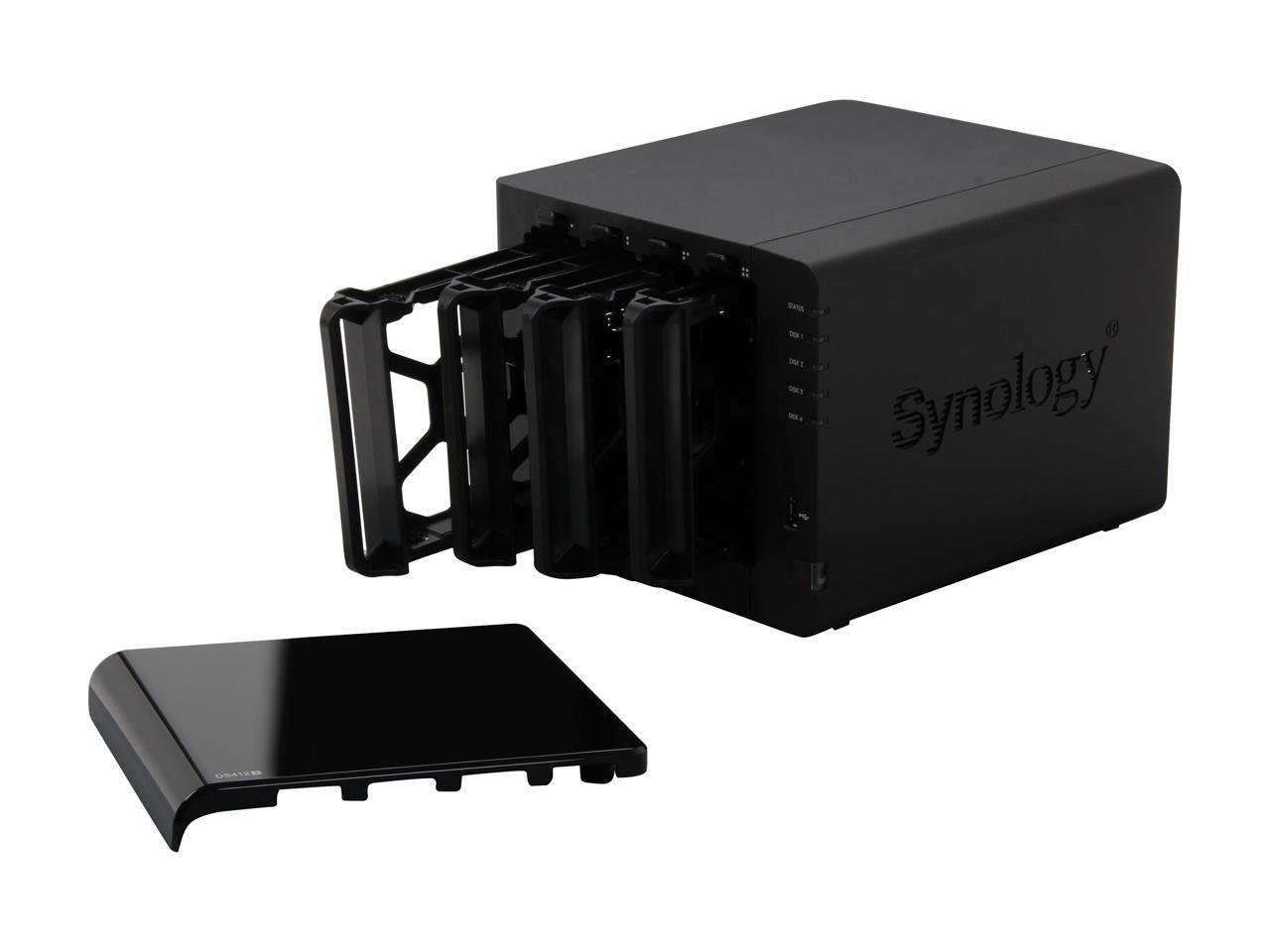 (54) Write a Review
OUT OF STOCK.
Overview
Specs
Reviews

The Synology DS412+ Four-Bay Diskless System is a high performance, cost-effective, network-attached storage solution specifically designed for small- and medium-sized businesses. A Dual Core processor, an abundant amount of memory, and two Gigabit LAN ports enable an ultra- smooth, lag-free response, while the SuperSpeed USB 3.0 and eSATA connection allow instant, lightning-fast storage expansion. Running on the renowned operation system Synology DSM, and featuring an abundance of applications and features, this system provides an efficient way to centralize data backups, protect critical assets, and share files across different platforms. Complete with the high reliability and stability Synology is renowned for, you can rest assured that your business will be performing at top efficiency, with minimized issues and maximized up time.

Pros: Really well thought out management page. The administration interface is definitely a step above anything else I've seen at this level. Highly flexible and configurable. Everything operated as documented and I haven't had any issues yet.

Cons: The case is a little less sturdy than you might hope for, but it still does the job. The management interface, although impressive, might be a little tricky for the less technically inclined to handle.

Pros: - everything works as advertised - no-nonsense raid setup, their SHR default raid setup is redundant and just takes care of redundancy for you. - software interface is very nice, HTML5, slick and clean.

Cons: - As others have mentioned, it's case isn't confidence inducing, but while the whole thing is super light (without drives) and plastic, it's not flimsy imo. Plastic seems plenty thick, front cover holds on fine, nothing rattles, back plugs seem fine/normal to me. The finish on the plastic looks fine in person too. - Weird that the OS of the thing is installed on the drives YOU put in, would it have been that hard to put a chunk of flash for the OS on the board? I suppose then the OS wouldnt have redundancy, but i thought i'd mention it. You put your drives in, then push the OS to it over the network using their utility, very easy, everything auto-discovers fine.

Overall Review: I've been using this for a few weeks, very happy with the speed, lack of noise, and configuration options. It's not super flexible, but it does everything as advertised and then some. Transfer rates approaching 90MB/s with 4 drives in SHR raid, one nic connected, just as fast as the drives were in a full windows box. I highly recommend this NAS.

Pros: I now have 3 of these Synology DS412+ NAS units... and I am super impressed with everything about them. I also have an older DS411+ unit and it also works, although its a touch slower than these DS412+ units.

Cons: None. Nothing bad that I can convey.

Overall Review: I started off with the DS411+ unit in 2010 and it has gone through all of the software upgrades that Synology released. Never once did I have a problem - You DO read the instructions, yes? DS412+ NAS units are faster and are of a different physical construction than the DS411+. I'm OK with the physical construction of the DS412+ NAS units as I have them sitting on a stable shelf. I use these 3 units with my Macs (AFP) and Linux (NFS) machines. Mostly, I use them to feed my Oppo 95 BD player via DLNA in my Home Theater setup and this works like a champ. I am still in process of ripping my video library (DVD and BD), and I am impressed with the Ethernet transfer speeds from my Mac Pro to the NAS412+ units. Most of my BD video results in a ~30GB MKV file and this is what I upload to feed my Oppo. A couple minutes each to upload. I am using 4 Seagate Barracuda 7200.14 ST3000DM001 3TB HD's in each unit. OK, these are desktop drives with a terrible warranty period, but they have a sweet spot in pricing and I have in house spares for failures (none yet). I run these 3TB drives in RAID 1 (Mirrored) for 2 volumes per DS412+. I'm getting about 2.7 TB useable space per volume and they are formatted with Linux EXT4 FS. Should I have a single disk problem, I can move the "good" drive over to my Linux host and recover the files, hence the mirrors as oppose to RAID 5. Should this happen, after the recovery of the files, I'll put the "good" drive back in and execute the recovery process for a RAID 1 volume, just by following the instructions. You know, read before you leap. Last year, Synology had a problem with a "blue light" something, but these units have been solid and they are current software wise. I think you can safely ignore that issue. Don't know what else to say... They are superb units for me. Go to Synology's web site and peruse the features and then head over to the user community and take a look around. AND MAKE SURE YOU USE DRIVES ON THE SYNOLOGY HD COMPATIBILITY LIST. Otherwise... your mileage may vary.

Pros: Setup was easy. (This is not for those who expect an iPhone interface.) If you have basic knowledge of raid / what it is supposed to do, it will meet every expectation. It is quiet, beautiful and handles everything i've thrown at it so far. For file sharing and peace of mind archiving A+. Also KUDOS to Synology for opening up their platform for the true power users who want to tinker in the OS space.. (yes you can run minecraft server(s) on this).. and allowing us to do many additional things an external drive can not achieve on it's own. I primarily use this for Plex / Git / File Storage. I may move my childs minecraft server to this once I get all my files organized. Besides Plex, another great app is Glacier Backup! Check it out.

Cons: If you are looking to save money on a nas and are exploring the lesser models, please be aware that they will function perfectly as a home nas, but power users really need to reconsider the intel/powerful models. I put this in the CON section because Synology: you need to help customers have a great experience, just cause it runs an app doesn't mean it should! :)

Overall Review: I previously purchased a lower model as it also ran the same apps. I upgraded because some of those apps shouldn't be allowed on machines with insufficient horsepower. (I wish i had a trunking switch!)

Pros: Great GUI. I don't mind having an awesome GUI that makes sense, uses a mouse and looks like a nice website. This not only gives the power and flexibility I want, but the ease of use that allows me to hand over simple tasks to a non-techie.

Cons: None. Been using it for almost a year without a problem...even with major software update. Bummer that the surveillance station software is EXPENSIVE to add cameras. You get one camera and then have to pay for each additional camera you want to connect. If you want to charge me for use, just tell me what this program costs, let me buy it and then connect as many cameras to it as I like.

Pros: A fabulous NAS - it is worth every dollar of its high price. I read this (rather extensive) review on ArsTechnica before deciding, over a year ago, that this was to be my NAS of choice when I would upgrade from my current N3200Pro. http://arstechnica.com/gadgets/2012/09/synology-ds-412-is-fast-fun-and-flexible/ Read the review and decide for yourself - I dreamt of getting this since I read about it. I have used two other NAS devices before - my current N3200Pro and and older, much more primitive, server. So far this is the best! I have put in 4 WD RED 3 TB hard drives, and configured it to be a RAID 5 box. I was more than a bit tempted to make it a RAID 6, for the added redundancy - who knows - I may still do it!

Cons: The only con I can think of is the price. But then, the features you get for that price nearly justify it!

Pros: Bought this for a combined web/mail/media/whatever server. Hardware and software-wise, it is one of the best, all-encompassing, easiest to use, most customizable products I've used. I've rarely seen processor usage go above 30%-- and remember that I'm running various servers on this thing. It's usually at 0% and will jump up to maybe 10% with heavy internet traffic or while transferring data to clients. RAM seems to sit between 25%-30%, though if I start running other packages on it, I've hit 40% (I did upgrade the 1GB module to 2GB, though, which is also relatively easy and is very stable). The speed of this thing astounds me. With an SSD for my web services and package installation drive and three 1 TB WD Red NAS drives in a RAID 0 array for my media and backup drive, I've been able to pump data out of its ethernet ports (both of them set up into a 2Gbps dual-link) at 209 megabytes per second. I never pump that much data at once under normal circumstances, but that was pushing it to its limit. You'll have to have an enterprise-grade switch to set up dual-link aggregation, of course, but even before I set that up, I got full gigabit speeds out of this thing. It's a beast, and you won't be sorry using it as your media server-- I don't store any of my movies or music on any local machines anymore. It's all on the NAS. The array of available packages is amazing. There are plenty of Synology-developed packages that run great. Then there are dozens and dozens of community-developed packages to give you even more options. I easily set up a free SSL certificate (NOT self-generated) for my website from StartSSL). The Linux-based software is quite malleable. I've set up quite a few customizations of my own that help run things the way I need for my applications. These are not power hungry! I think mine runs at 40 watts max. That's less electricity than my gigabit switch. Heck, that's less electricity than most of the light bulbs in my house. I use a second one of these at work as a security camera server and an intranet site server.

Cons: Mail server package is a little convoluted still. It works, but it could be better. You'll have to be fairly tech-savvy to set up a website and be able to have it accessible from the outside world (meaning not just on your local network). That's just the nature of it all, though. Wish it had more USB ports. I knew what I was getting into, of course, but it'd be nice. While the Linux-based OS is definitely able to be molded to your needs, it's been customized internally so that it's different than all other distributions, which makes researching how to do a certain task or doing a certain task that works on 90% of other Linux distros a little more difficult.

Overall Review: Just get one. It's completely worth it. I really want one of their 12-bay ones. Just to have it. Ahh.

Overall Review: I purchase the Synology DS412+ to replace a home made NAS, running FreeNAS , that I have had for several years. The DSM software configured the NAS right out of the bow for the max capacity/best reliability. I am sure I will get in a tweak it once I get familar with the product. I would recommend it.