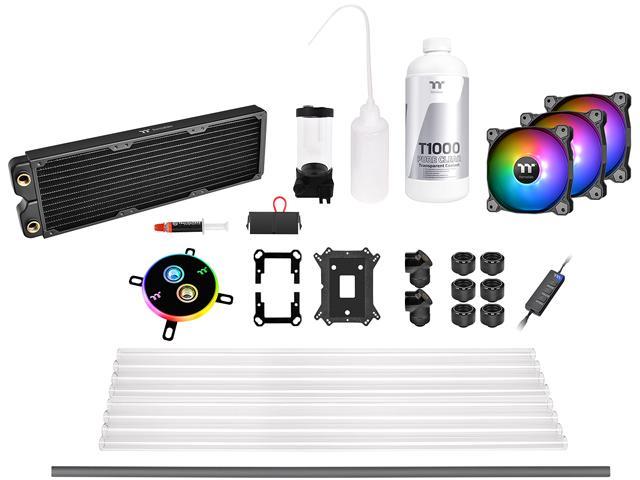 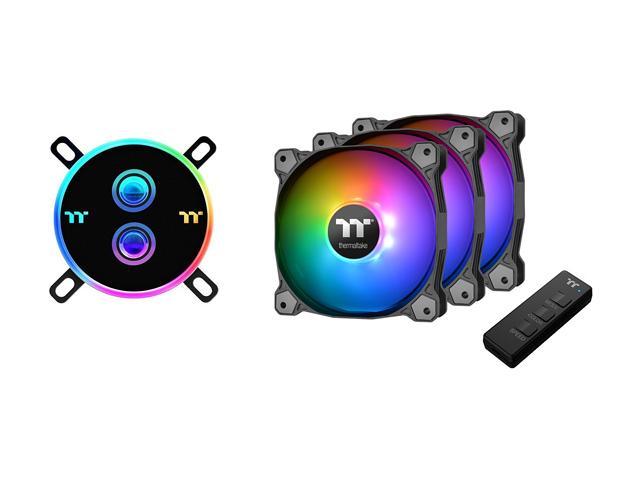 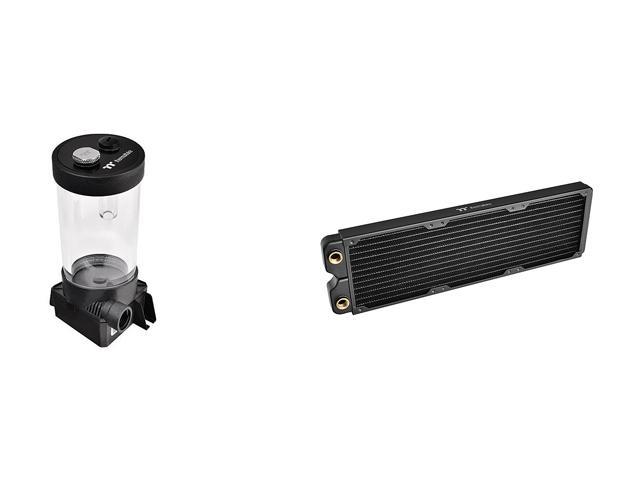 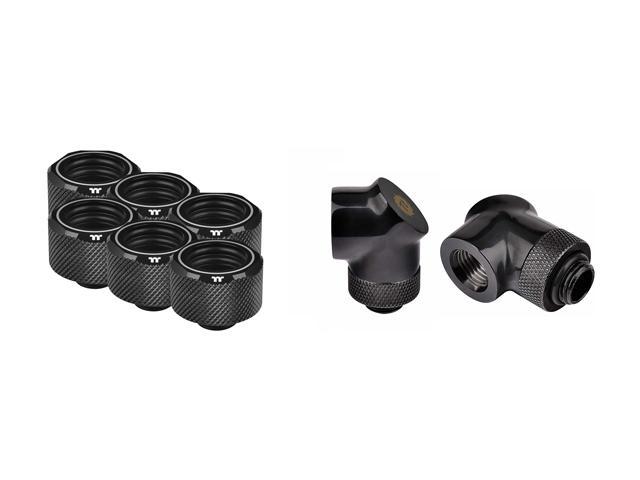 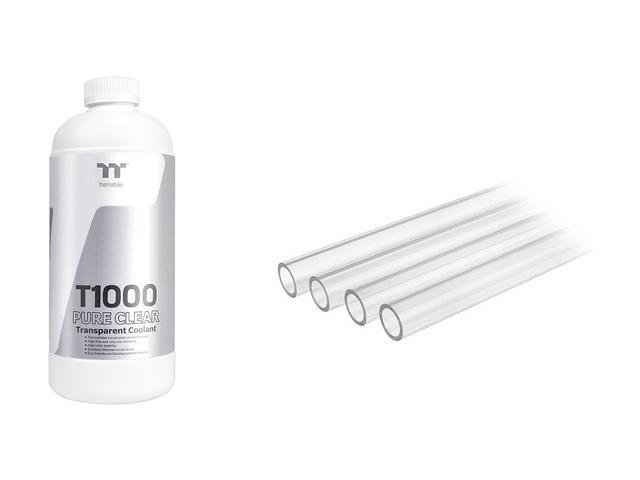 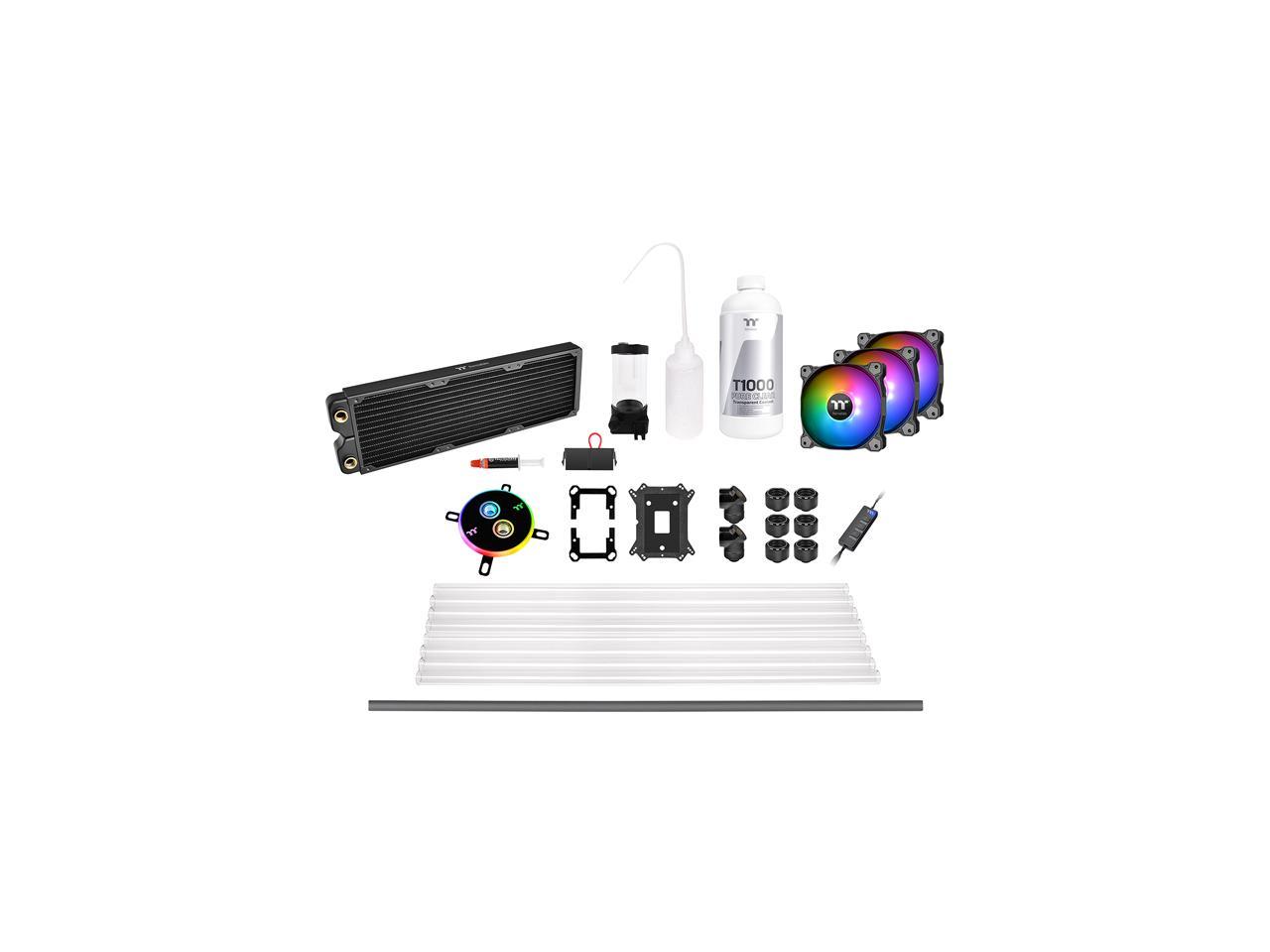 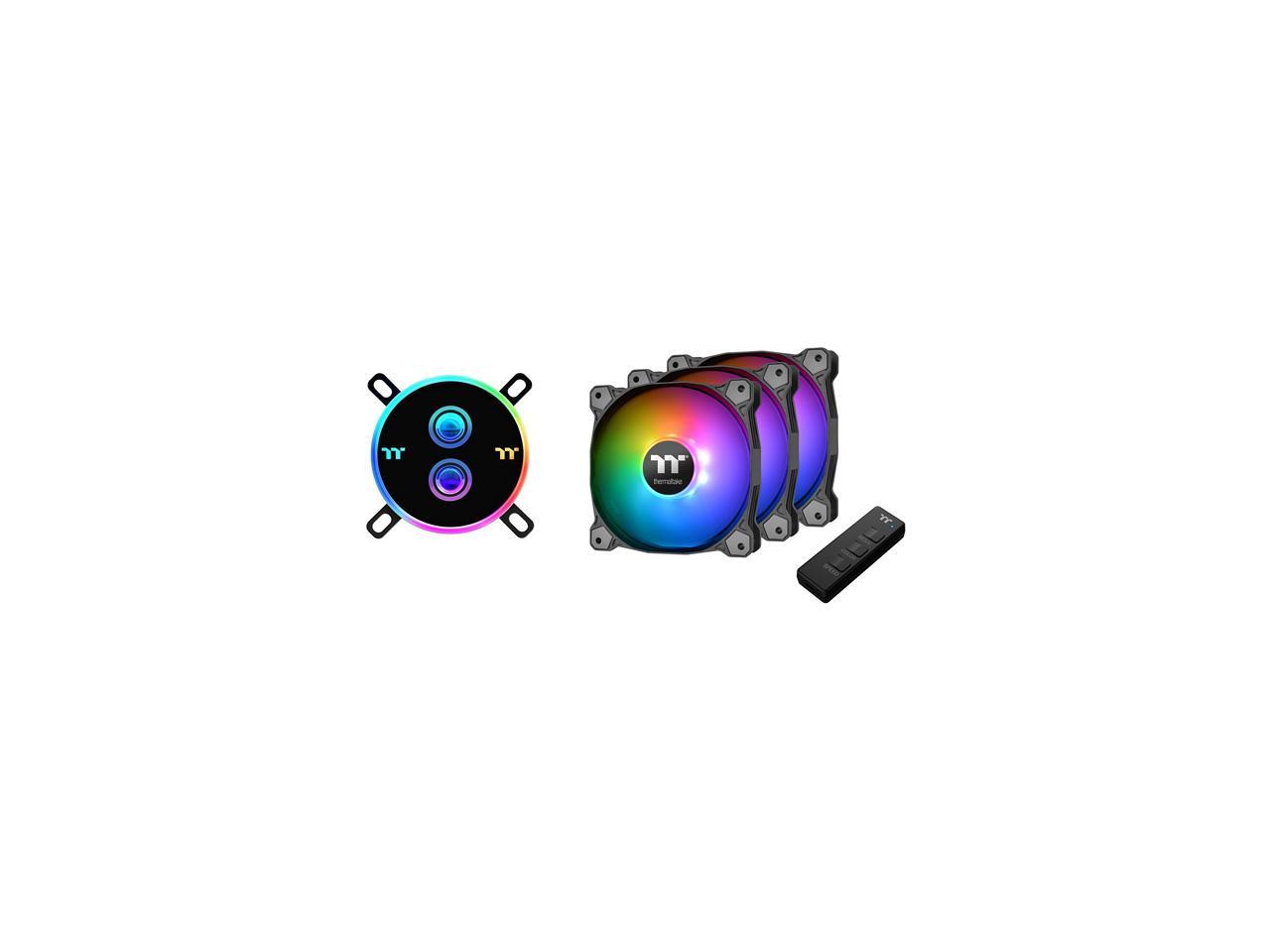 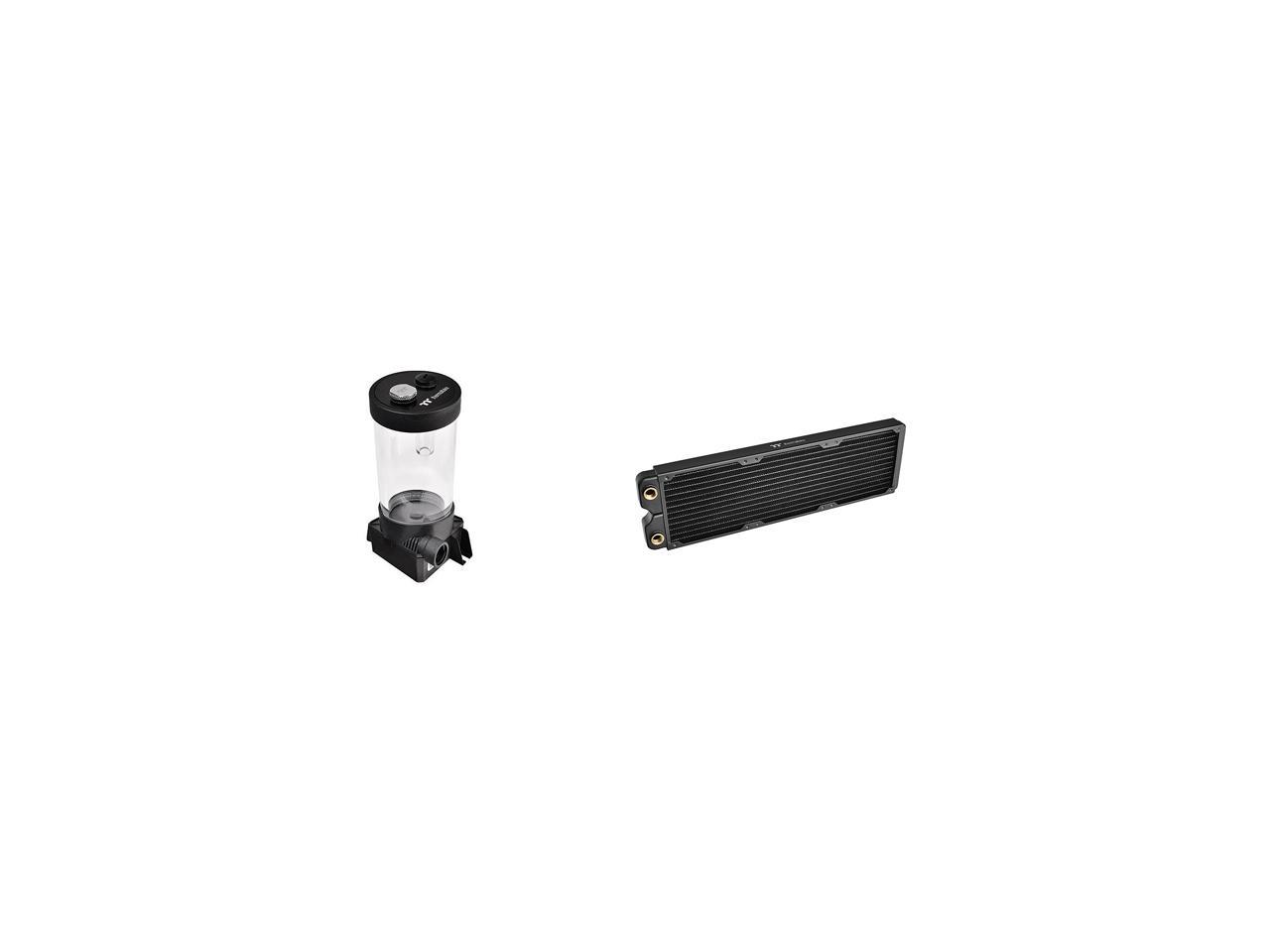 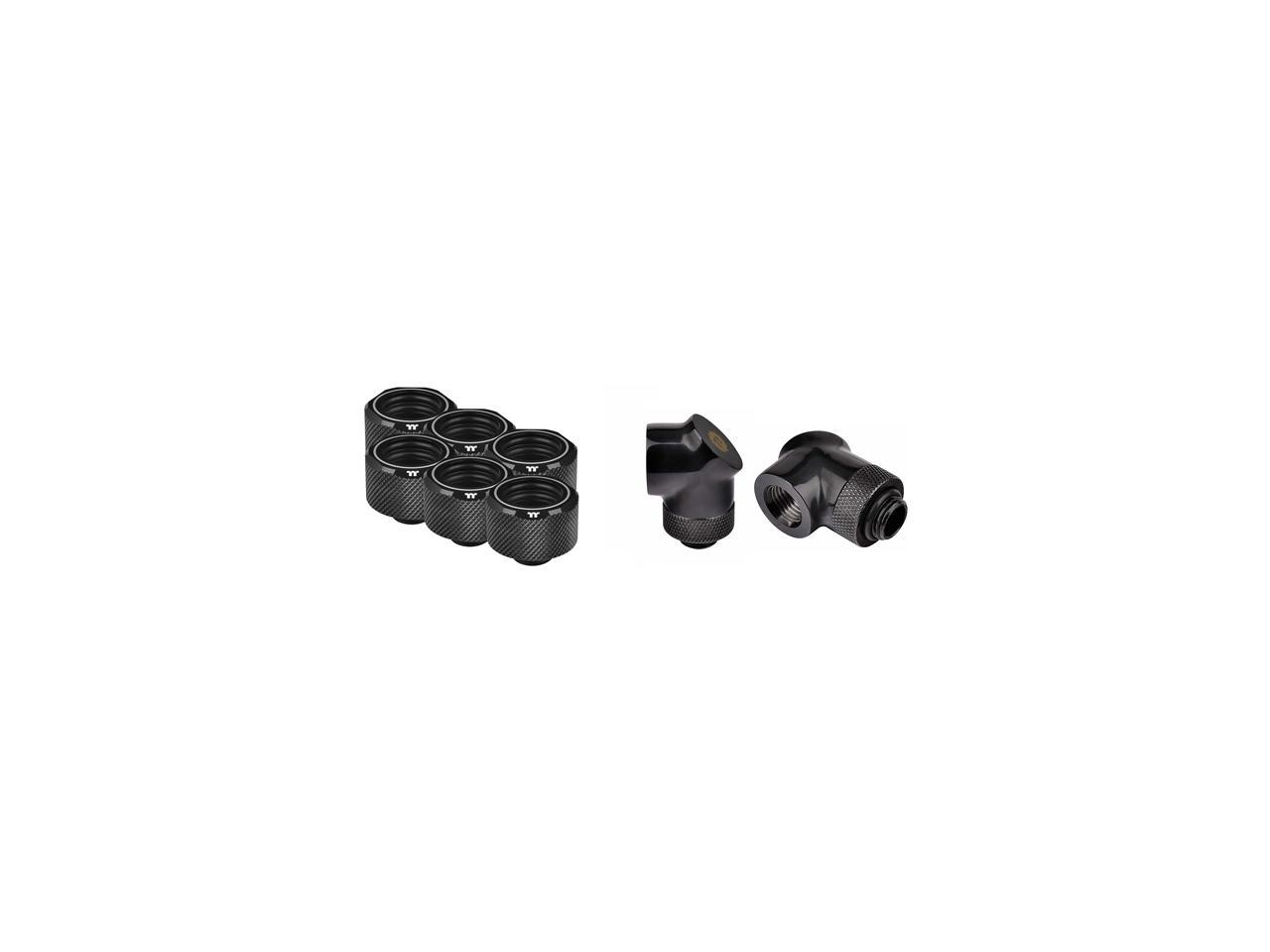 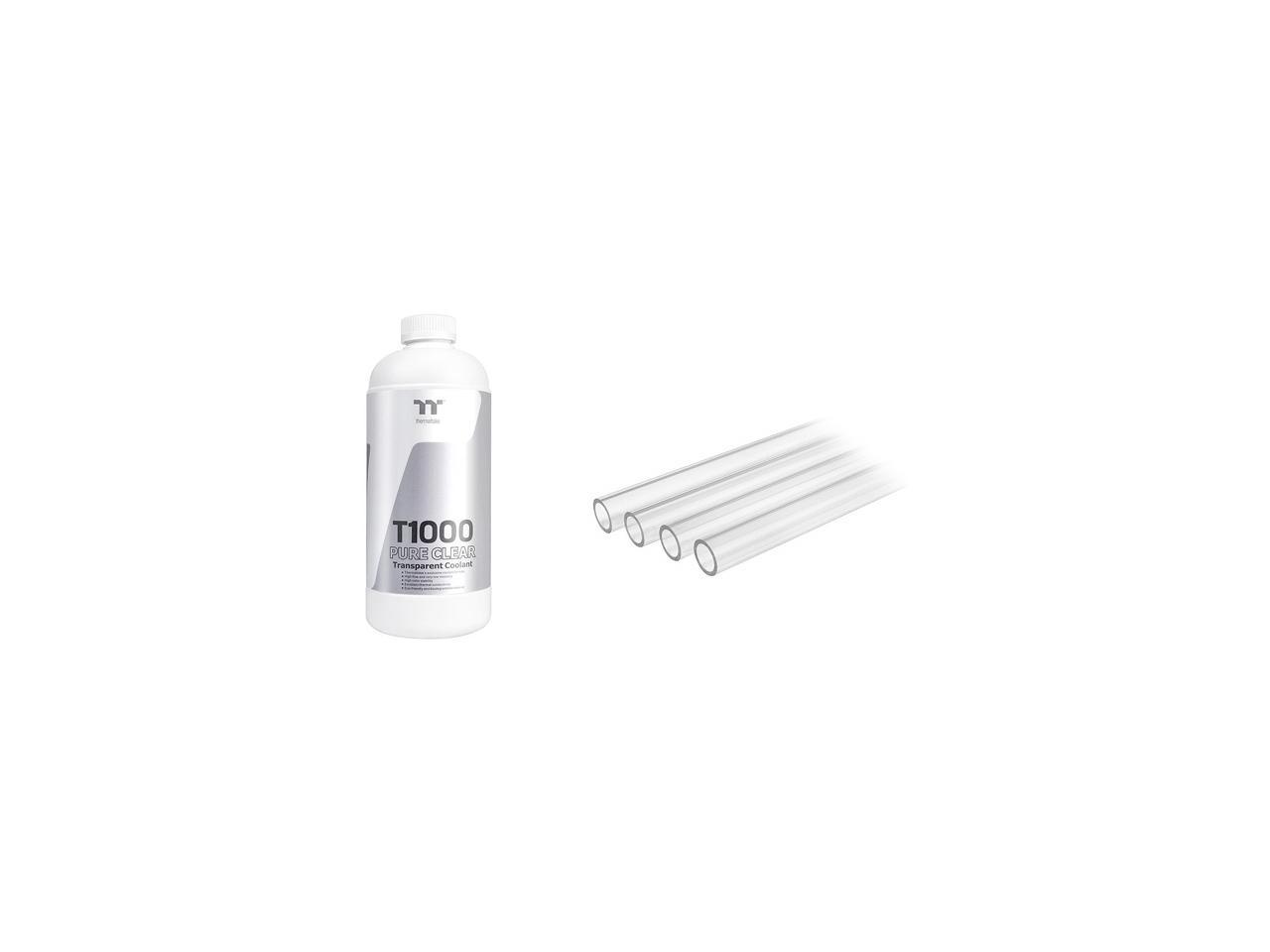 This kit from Thermaltake lets you flexibly DIY a powerful and stylish liquid cooling system that is ready to sync with 5V RGB capable motherboards from Asus, Gigabyte, MSI and ASRock. It includes one Pacific W4 ARGB CPU Water Block, one Pacific C360 Radiator, three Pure 12 ARGB Sync Radiator Fans, and other accessories. All the components are painstakingly manufactured to ensure easy installation and great reliability. The kit is also Tt LCS certified for class-leading performance and compatibility. Tt LCS Certified is a Thermaltake exclusive certification applied to only products that pass the design and hardcore enthusiasts standards that a true LCS chassis should be held to. The Tt LCS certification was created so that we at Thermaltake can designate to all power users which chassis have been tested to be best compatible with extreme liquid cooling configurations to ensure you get the best performance from the best features and fitment. The W4 ARGB CPU Water Block comes with a ring of 12 addressable single LEDs that support 16.8 million colors around the edge. The lighting can be controlled by the included ARGB controller and is ready to sync with 5V RGB capable motherboards from Asus, Gigabyte, MSI and ASRock. The Water Block features 0.15mm internal fin construction, a copper base with anti-corrosive nickel plating and high-quality PMMA cover, and a universal mounting mechanism that offers error-free as well as no-tools installation. Designed to fit most G1/4 fittings, it provides the ultimate in cooling performance, and delivers extreme compatibility for custom PC builders. A high-performance 360mm slim copper radiator that comes with high-density copper fin design and brass tank. Built for 120mm high-static pressure fans, the radiator is manufactured from premium-quality materials that provide exceptional performance and unrivalled reliability. The unique stainless steel side panels guarantee the durability as well as reduce the weight of the radiator. Integrated G1/4" threads make it easy to install, while rigid connections ensure leak-resistant measures are in place. It is a radiator with an ideal mounting, fitting and flow set-up. Manufactured from POM and PMMA, the unit includes a 200ml long reservoir with an integrated DDC pump, offering exceptional performance and unrivalled reliability for all gaming systems. Finished in chrome-plated copper, the adapter fitting is in 360° revolve-able design, and consists of two sealed O-rings, allowing users to redirect the fittings at a 90 degree angle for easier tube routing. Two adapter fittings are included in the kit. Learn more about the Thermaltake CL-W243-CU12SW-A

Overall Review: This is a great, inexpensive way to get into custom water cooling.

Pros: Everything needed to run a single, simple loop.

Cons: Cheap pump/res. Hard tubes are a little tricky to bend if you've never done it before.

Overall Review: So, this kit comes with everything one word need to run a fairly simple loop. As a novice to working to hard tubes, it was fairly easy to get the hang of (in my opinion). My advice is to sacrifice your first tube to get the hang of bending them. Directions are vague at best. Having said that, it seems like the pump/res came to me DOA. I've seen many reviews on this stating the same, which may explain the cheaper price point for the whole kit. I've tried plugging into 5v and 12v ports, going into bios to manually set up my pump settings. I've exhausted all my ideas, so, unless there's something I haven't thought of, I would conclude it's just dead. Customer support might have been helpful if I got any response too. Will give 5 stars when the problem is rectified and I can get this work.

Pros: Easy to get up and running.

Cons: - No PWM control on the pump so it is annoyingly loud. Before when my machine was idle it was silent. Not anymore. - One of the fans stops running at max RPM, 90% is fine just not 100%. - Fittings are MASSIVE in comparison to something like the Primochill fittings.

Overall Review: If you want to get up and running quick, this might be the thing for you. Honestly though, I now wish I'd purchased at least a couple things separately. The pump noise might not be as bad if I didn't have an open frame case but it is seriously annoying.

Overall Review: After 2 months the pump died. Is a great kit for starting in dyi water cooling but i dont recommended.

1 out of 1 people found this review helpful. Did you?
Manufacturer Response:
Greetings, Sorry your unit is defective. Please feel free to file an RMA and we will work to replace your defective product. https://support.thermaltake.com/RMA_Agreement.aspx
Anonymous
Ownership: 1 week to 1 month
Verified Owner
Dead pump7/23/2021 2:58:38 PM

Overall Review: Shipping was a dead pump, not really impressed

1 out of 1 people found this review helpful. Did you?
Manufacturer Response:
Sorry your unit is defective. Please feel free to file an RMA and we will work to replace your defective product. https://support.thermaltake.com/RMA_Agreement.aspx Greetings,
Anonymous
Ownership: 1 month to 1 year
Verified Owner
Garbage PUMP/Res2/2/2021 5:30:43 PM

Overall Review: After a month of use I have had to pull my whole loop apart because the acrylic on the pump failed and leaked coolant all over my desk and computer parts very dissatisfied with this considering the money side of it do not recommend go with Primochill or EKWB

1 out of 1 people found this review helpful. Did you?
Manufacturer Response:
We apologize for this issue, please submit a warranty request with us at: https://support.thermaltake.com/RMA_Agreement.aspx
Anonymous
Ownership: 1 week to 1 month
Verified Owner
It's great!1/28/2021 10:31:53 AM

Pros: -components are mid to high end, buying similar things separately would be more expensive. -everything is mostly copper/brass. You can get much cheaper stuff made of aluminum but then, there's corrosion/compatibility issues as mixing metals is apparently a no-no for reliability. -so much quieter than the air cooler it replaces, I now hear the HDD idling deep into my case! -with a 3x120mm (360) radiator, there's enough capacity to add a water cooled GPU -ridiculous/great digital RGB lighting: there's a controller included or you can plug the fans and cpublock directly on the motherboard DRGB headers. -soft-tubes are easy to work with, a firm grip with kitchen scissors is all you need. -the two 90degree fittings are very useful additions that could have been omitted for greed

Cons: -the screws to fix the fans on the radiator were missing from the package. -stock pump run at fixed full speed, there's no PWM like most other... and it whines quite a bit! Two ways to fix that: 1.Running it at 7V instead of 12V: with an easy mod of the molex connector, makes it much quieter without any noticeable performance penalty. The RPM sensor cease to work at 7v, otherwise it's fine. 2.My motherboard have hi power fan headers (24Wmax, the pump is 18W) and voltage control, apparently it's a special feature as most deliver only 12w or less and it might burn or trip some fuse... Knowing this, I've bought a very specialized adapter that takes the molex and RPM cables from the pump and combines them in a normal 3pin fan plug. I use the pump as if it was a fan directly plugged into the mobo. It's just a bit quieter than running it a 7V and the RPM is reported correctly, but the control and integration with the BIOS are very nice. (NB: the pump tend to stalls if the voltage is below ~62%, I run it at 64% most of the time and it ramps up at about 70% when the cpu gets quite hot). -including a cheap water temp sensor to the kit would have been a good idea: it makes much more sense to control the speed of fans according to water temperature than with super peaky cpu temps. -there was two plastic particles (glitter sized) in the pump that made crackling noise from time to time, it sounded like air bubbles and I was a annoyed when it didn't go away on its own. Had to purge the coolant, disassemble and clean the pump and put everything back together... It's well made and very serviceable exactly for this kind of problems... I also expected at least one major issue, this was it and not that bad.

Overall Review: I'm very satisfied and recommend it! You just have to remember that there's a reason it's referred as CUSTOM water-cooling, even if it's a kit, there's much thinking and tweaking to be done for it to fit your needs. It's a nice project and I understand why some people do it as a hobby, but I must say, even as a kit, there is still a lot of faffing involved. I had the time and patience so it was an overall pleasant experience! I have a very cheap Corsair Carbide 275r case, it was a bit cramped to install but I really like the huge front mounted rad, the whole package is very compact and works well! The kit is a good starting block to a very refined water cooling solution: by buying some additional fittings, like a water temp sensor and rotary joints, I've now have a very quiet and performant cooling solution. It's currently cooling only a slightly OC ryzen 3900x and there's definitively capacity to add a GPU in the loop. I'm a content creator, WFH, I do a lot of long renders that put the pedal to the metal for hours on ends and my computer is basically in my bedroom... The quietness: it's amazing and so underrated!

Pros: - All in one kit - Easy to install - Color profiles are nice - Extra supplies in case you make an error - Quiet as a kid sneaking cookies on Christmas Eve

Cons: - Instructions are very vague and unorganized - Not Compatible with Asus Aura Sync