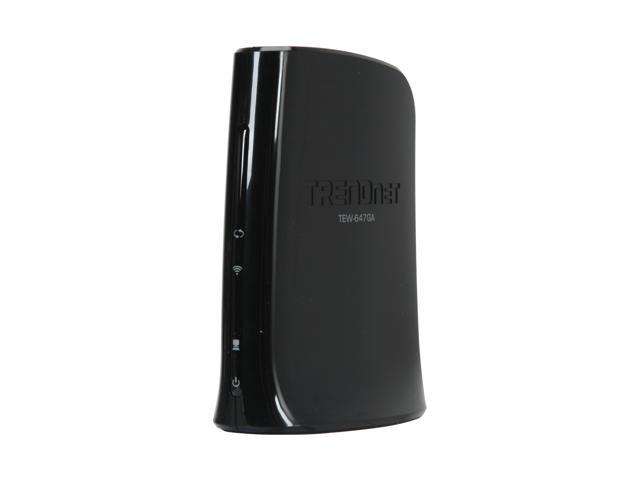 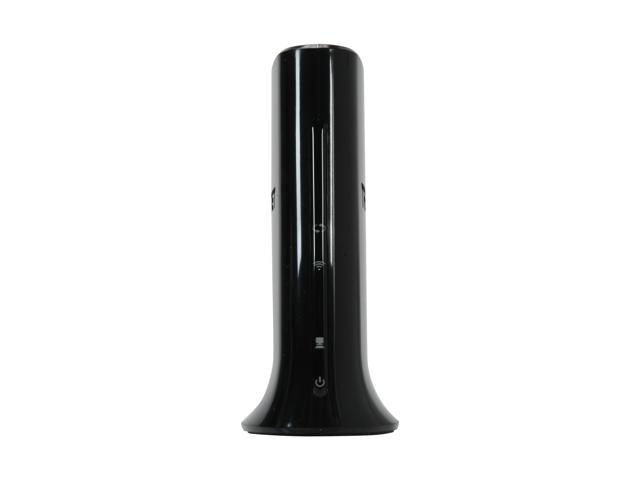 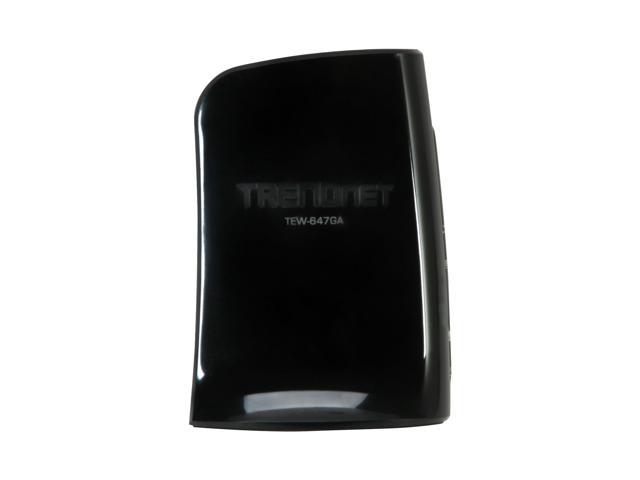 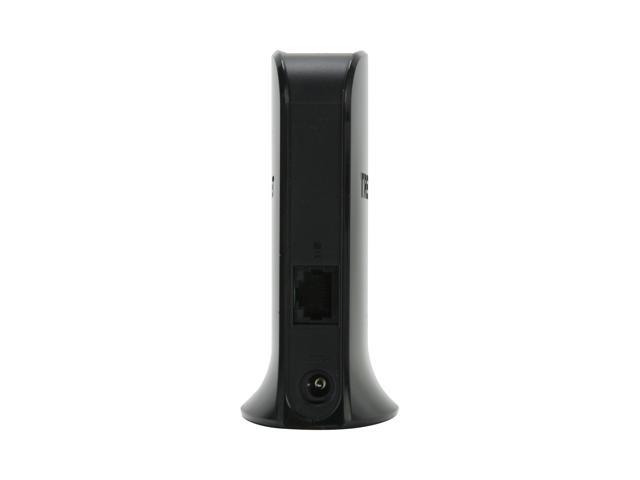 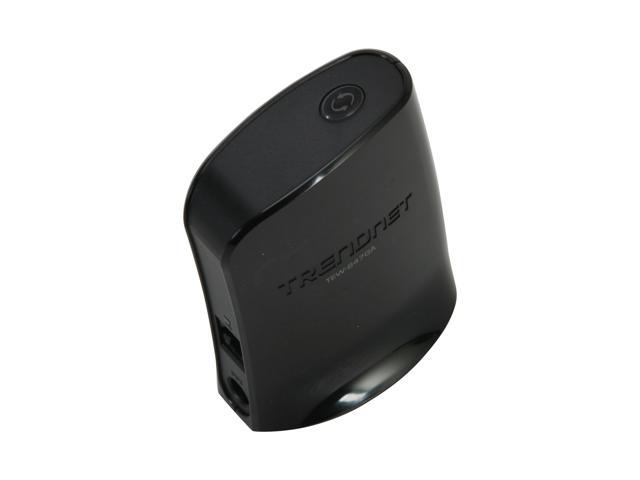 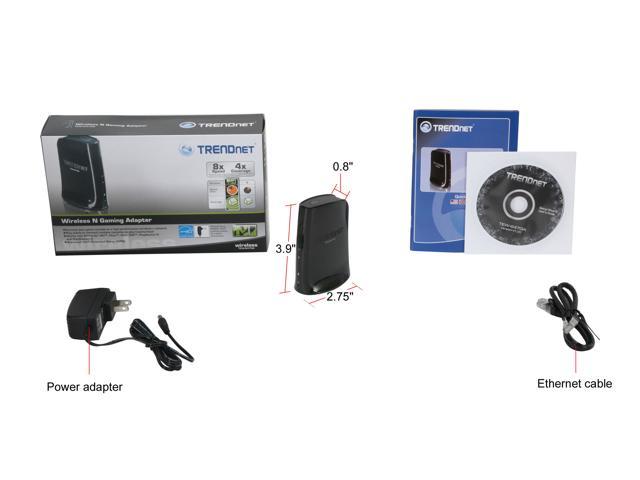 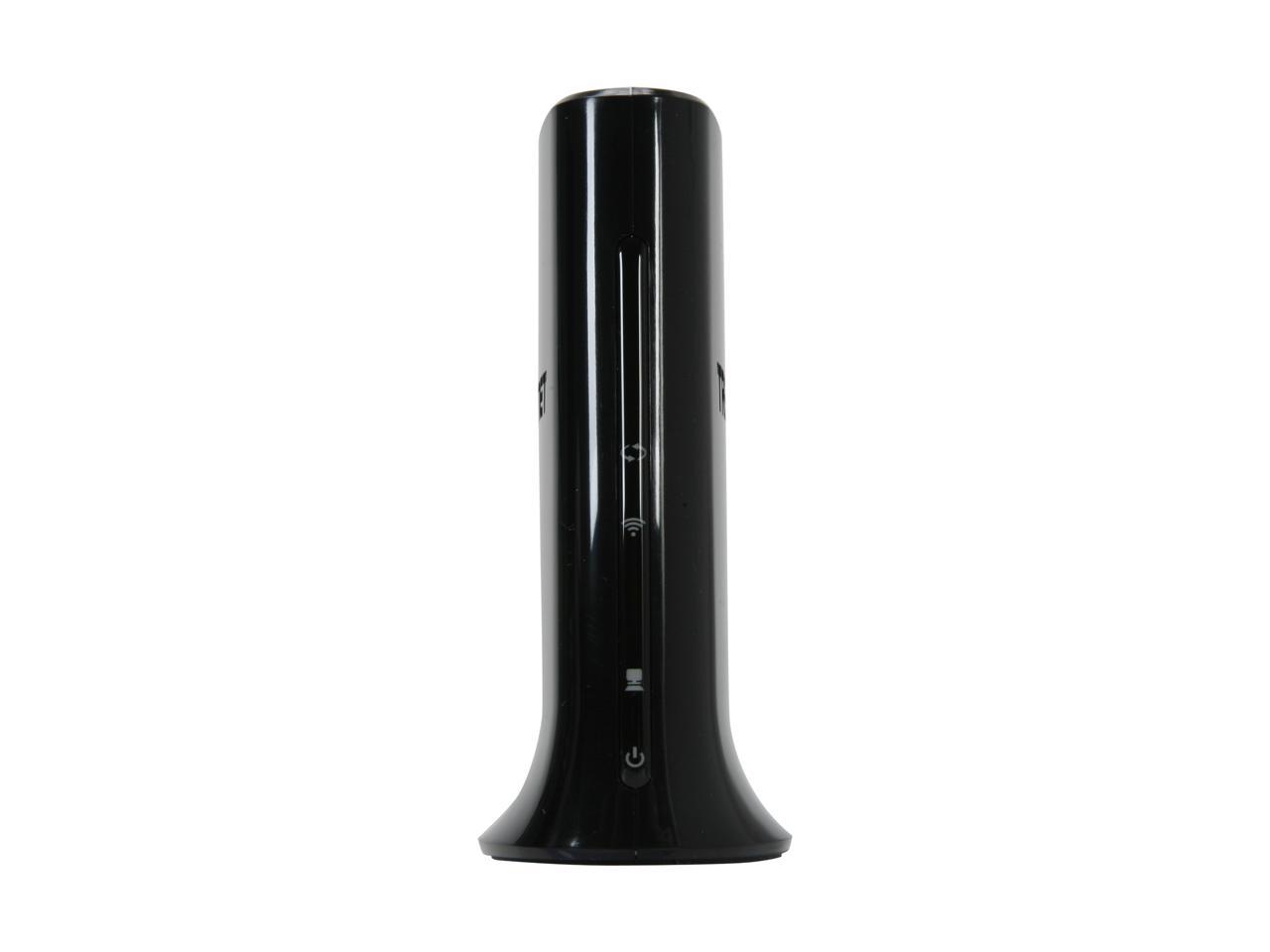 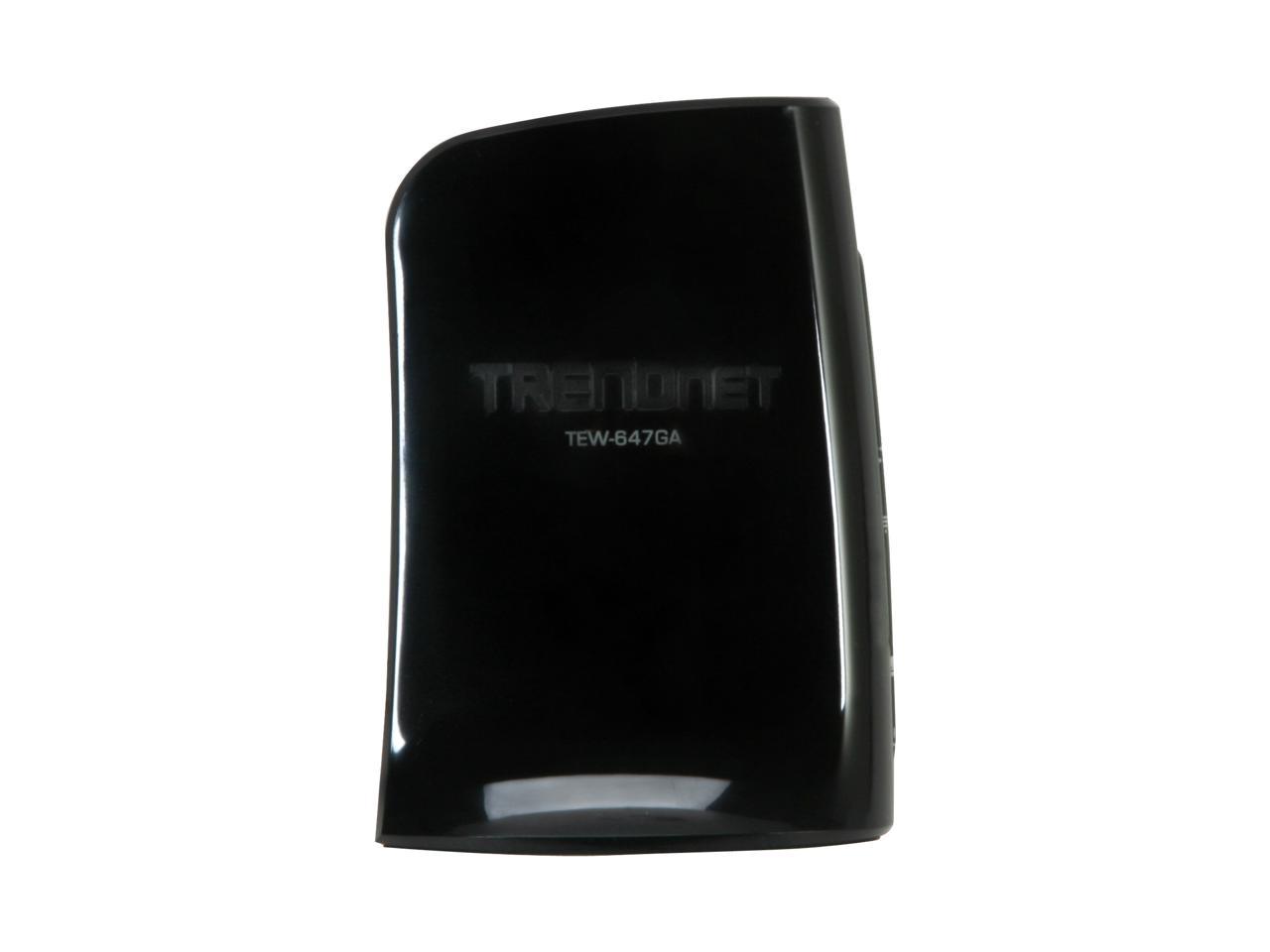 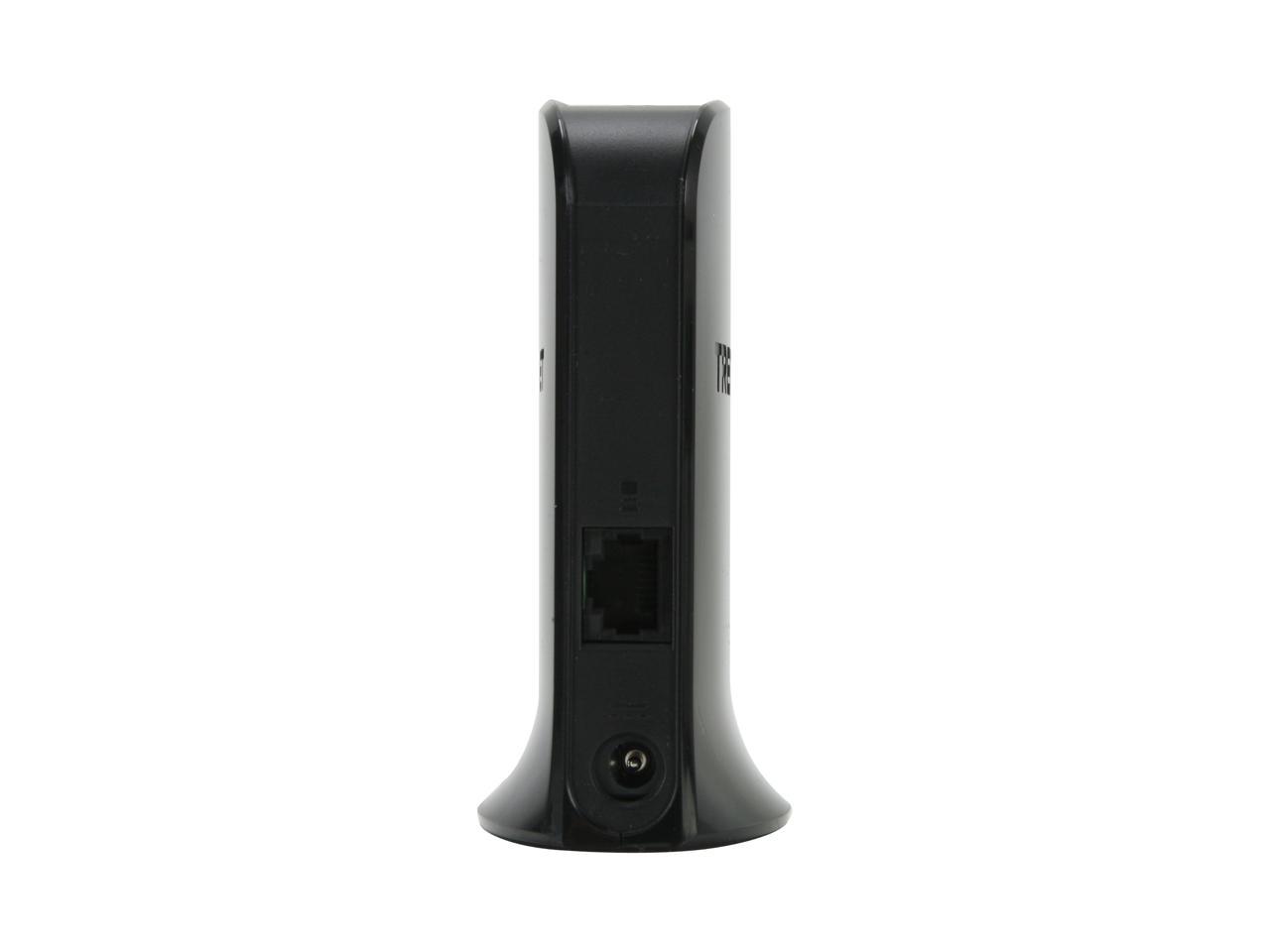 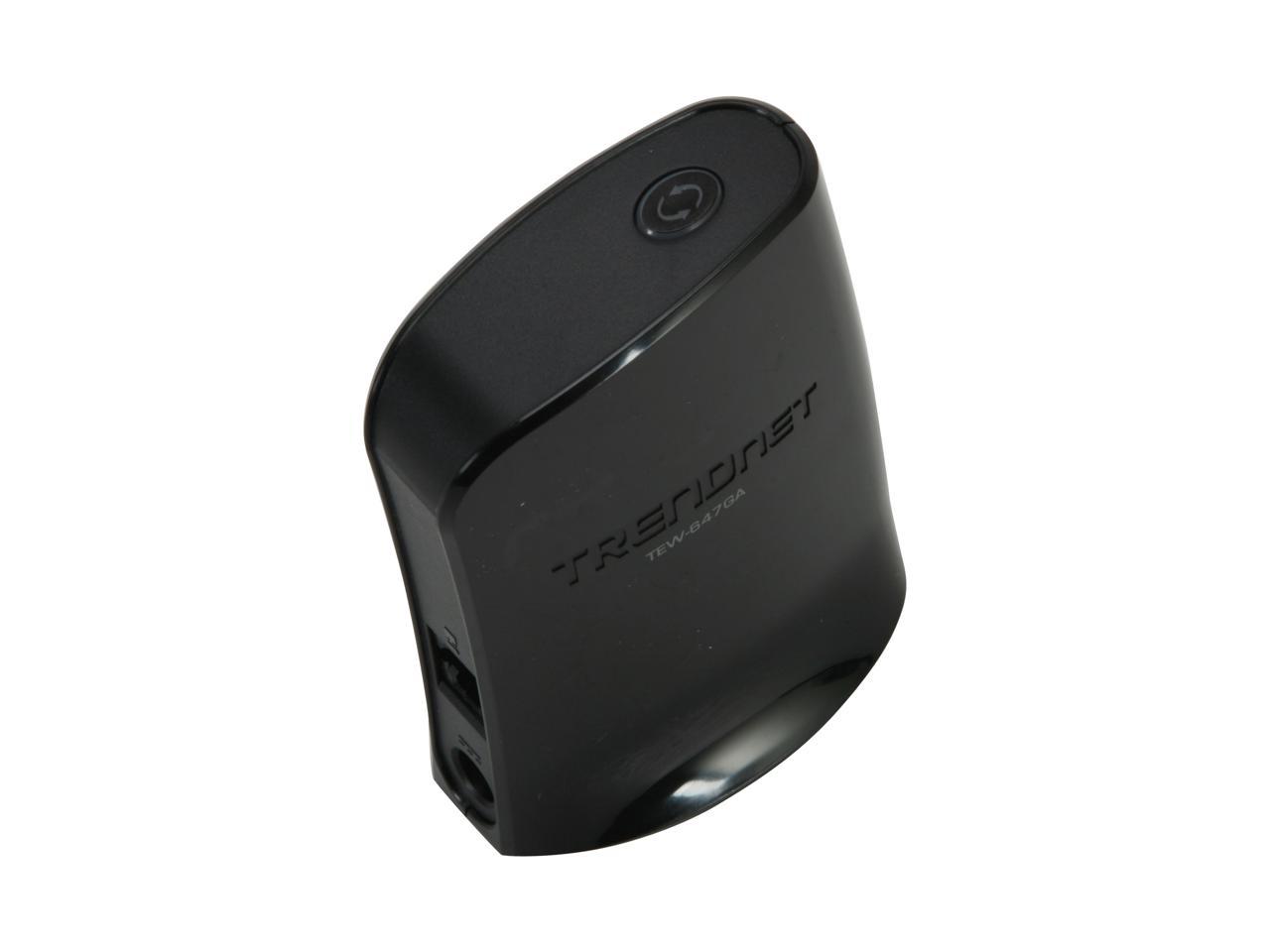 The Wireless N Gaming Adapter (TEW-647GA) connects your favorite Ethernet-ready gaming console to a lag-free wireless N network. No need to locate your gaming station near an Internet connection, cut your cables and start winning with high-performance wireless N. Setup is quick and simple, with no drivers to install. Works with Nintendo Wii®, Xbox®, Xbox 360® and PlayStation 2 and 3®. Connect multiple gaming consoles wirelessly and play head-to-head or challenge others over the Internet in multiplayer mode.

Learn more about the TRENDnet TEW-647GA

Pros: I needed an gaming adapter for, believe it or not, my aquarium controller. I decided on the TRENDnet on the recommendation of a friend who has never had any problems with his adapter. It has a very small footprint, so it doesn't take up much space under the cabinet. It's a piece of cake to setup and only took about 10 minutes. Keep in mind, that you want to set this up by directly connecting it to your computer, not to your existing router. It's been online and working properly for about a month with no disconnects. I haven't bothered to run any speed tests since I'm using it to access my aquarium controller over the web and don't really care about speed.

Overall Review: Plugged into wall. Hit the WPS button on the 647GA and my Wifi router. Lights blinked. Unplugged and connected to my XBOX360 two floors up. Plugged back in and connected ethernet. Showing >100Mbs when previous G adapter got 1-2mbps. Linked up in 15 seconds. Media Center Extender is now streaming Hi-Def. For $45. Do it.

Pros: Connects to my ASUS O!Play R1 and streams files up to 15GB flawlessly. Get a consistent 16,000 kbps, Setup took 5 minutes if you know what you are doing. Updated firmware immediately so I didnt have to deal with outdated issues and all worked great.

Overall Review: To setup the device: Set your computer to have a static IP: IP: 192.168.10.111 Subnet: 255.255.255.0 Gateway: 192.168.10.110 After doing this, plug the device into your network port directly on your pc/laptop. Use IE to navigate to 192.168.10.110. Login to the device using Username: admin Password: none/blank. Under Administration, go to Upload firmware. (Make sure you download the latest firmware from the manufacture before doing this.) Under "Wireless" click on Add to add a profile and enter all your network settings. I used WPA2 AES and had very good luck. Next go to "Advanced" and change Channel Bandwidth to 20/40. Go to QOS and uncheck "enable". Next... Under Network -> LAN Setting select either DHCP or StaticIP and set it up accordingly (if you dont know, just choose DHCP). After you apply the settings, go back to your Network Card's IP settings and remove the static IP (to enable DHCP) and you should be able to connect to the internet. Good Luck. Hope this helps

Pros: The unit has a reasonably small form factor, an attractive design, and it's lightweight for cheap return shipping if you hate it. I gave it two eggs because they did Eventually function.

Cons: I'd love to point out every bug and problem but I only get 1,000 chars so here's a brief overview: Started out with setup software- Default blank PW failed twice then worked third time New password said it couldn't save the change and I had to try again, tried again and it worked and moved to the next step but it still said it failed. Set wifi info and it took. Set IP info and it said it failed but it showed new settings Plugged into xbox and got an APIPA address. Failure. Took the second one out of the box to try WPS auto setup Pressed router WPS button, then TRENDnet button Devices finish syncing Plug into xbox. Got APIPA address so it's still not working. Located reset button on bottom of devices and reset both. Tried both methods again. Still APIPA addresses. Set local PC's IP to the 192.168.10.xxx subnet. Found device THREE mirror image setups and resets later one device took, joined wifi, and pulled an address.

Overall Review: I've bought at least 5 trendnet products before these and have returned every single one before because TRENDnet makes garbage, but hey, I thought, maybe this time will be different, and at $19.99 cyber monday pricing, why not?? I'm a network engineer, not some guy who gets mad and calls something he doesn't understand broken. They aren't broken they are just AWFUL to set up. The software just plain didn't work. There was no ifs or butts about it. I did check that I had the latest version of the setup software, and once I got onto the same subnet as them I did verify that I had the latest firmware on both. The truth was sometimes the settings took, and sometimes they didn't. You can have two with mirror images of each others' configurations (well, different IPs and names) and one will work and the other won't. It's just a bad company with an unpolished product. Spend a few dollars more and buy something good.

Manufacturer Response:
Valued Customer, We are sorry for any inconvenience this may have caused you. Please contact us at sales@trendnet.com,reference "New Egg product review" and someone will contact you immediately. We look forward to working with you directly to restore your faith in TRENDnet products. Warmest regards, TRENDnet Sales Team
ronald r.
Ownership: 1 day to 1 week
Verified Owner
So far, so good3/3/2011 8:54:25 AM

Cons: Direct IP configuration requires you to extract default IP from full user's manual; not listed in the quick start guide which only covers the Windows setup utility. (NOTE: default IP = 192.168.10.110 default UID "admin" default PW <blank>) Small size can also be a minus; this thing gets dragged off of tables by the weight of the Ethernet cable, so placement is touchy.

Overall Review: Got this to replace a G-only bridge for some extra WLAN speed. Throughput wasn't appreciably faster than the G bridge until I set this client's channel bandwidth to match my access point's channel bandwidth. It still plays nicely with the G clients remaining on my network. Up for approximately 16 hours and still maintains 108Mbps connection rate. AP logs indicate this thing drops & regenerates connection occasionally but it doesn't seem to interfere with use.

Pros: fast. faster than the wired connection i had to my router. I have a 24mbps internet connection with At&t uverse fiberoptic, when i wired my switch straight to the router (cat5 cable over about 90 ft.) and it normally tested on speedtest.net at around 18-20 mbps down, 0.6-1 mbps up. Now realize here that the At&t 2wire fiberoptic wireless modem is NOT wireless n, it is only b/g. going from the 2nd floor to the basement thru the a/c unit, microwaves, breaker box, oven, and laundry room it tests at around 21-25 mbps (don't ask how it tested higher than my uverse subscription speed, idk how) and all tests were done to the Dallas server from KC As far as transfers on my local net, (everything on the local net is gigabit) it was about 160 mbps tops, now its around 180 mbps normally, 240 mbps tops.

Cons: comes with a really short rj45 occasionally it gets a little warm to the touch, but nothing of major concern. i wish you could configure it thru a web address, like 192.168.x.x

Overall Review: it's alot smaller than i thought it would be. and yes, it's very pretty. Bought this to get rid of that really long cable running on the side of my house, I didn't think it would be better, but it is. This is the data that runs thru it thru a netgear gigabit switch constantly: 1. my debian linux server, which hosts the home network (3 pc's data storage, 2 network-booting workstations), runs as my network dvr (5 clients), http/ftp remote server (for my android, my desktop at work, my wife's laptop and her desktop at work) 2. ps3 3. xbox 4. bluray 5. internet tv terabites of data run thru it hourly, but it never quits, never slows down, never disconnects.

Pros: awesome my router is in another room and this thing runs great and keeps the clutter an ethernet cord running around my apartment under control. LOVE it after i got to work

Cons: YOU MUST GIVE IT A STATIC IP. If you are running a DD-WRT enabled router this will be a cake walk...but if not, might be a little difficult unless you can manually config your adapter to have a static IP so you dont keep losing connections...After assigning a Static IP and giving my XBOX priority QoS on my LAN, i have not experienced any issues or LAG.

Overall Review: awesome product, but a somewhat techy person would fair better than others.

Pros: Is MUCH faster than the Zyxel 200Mbps Home Powerline stuff and more reliable.

Cons: Is a little hard to setup. Doen't reach anywhere near 300Mbps but to get the most out of the device: 1. Before you even start, pull down the latest frimware and utility from Trendnet's web site. 2. Follow the utility's instructions and set up a FIXED IP for the device. Connect to your wireless network as a test. 3. Logon to the web console. There are far more options in the web console. Flash the firmware with the latest if it didn't ship with the latest. 4. Don't even bother trying to use the device. It wont go anywhere. Hit the reset button on the bottom. Use the utility to get a base config again and jump back into the web console to do an advanced config. 5. Set the Channel Bandwidth to 20/40MHz (you should be doing this for all of your 300Mbps devices - routers, NICs, APs etc.). Without this setting your are limited to 150 Mbps. Turn on Green Field. 6 Connect your Ethernet device. Enjoy.

Overall Review: The IP address of the Gaming Adapter is only for management. It is not the IP of your Ethernet device. That still need to be set up by entering tan IP by hand or use DHCP. Your device simply jumps through the Gaming adapter as a bridge. I use this to connect to a rather loud VMWare Server I have in the garage. VMWare is kind of sensitive to NICs so this was my best solution to utilize the built-in Intel Pro-1000s. Going through two cinder-block walls and a metalized sliding glass door I get between 2 and 3.5 MBps throughput (about 20 and 35 Mbps Wireless). The Zyxels would do .5 to 1.5 MBps - when they would stay up. When I have to copy SQL databases and OS ISOs to the Server and I am spoiled by GbE, this will do.