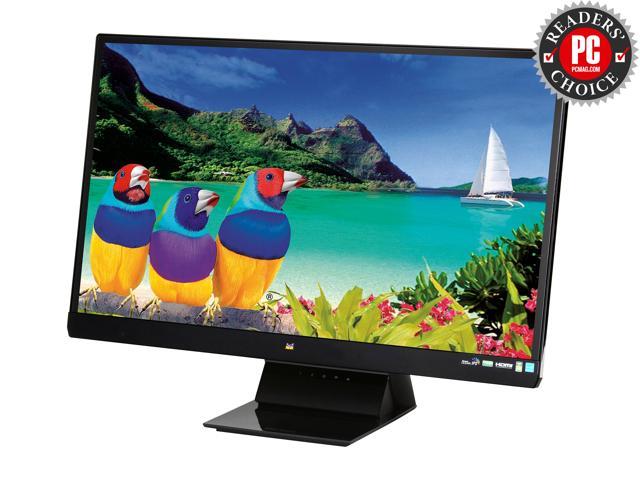 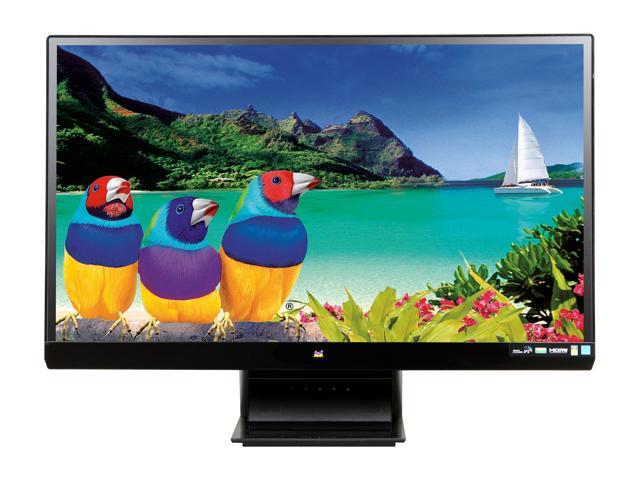 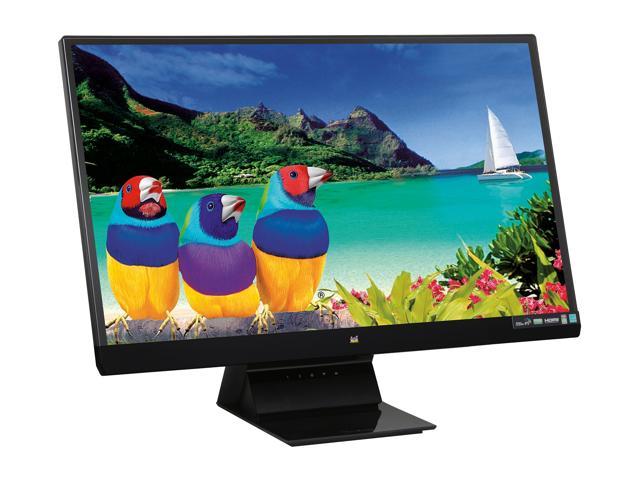 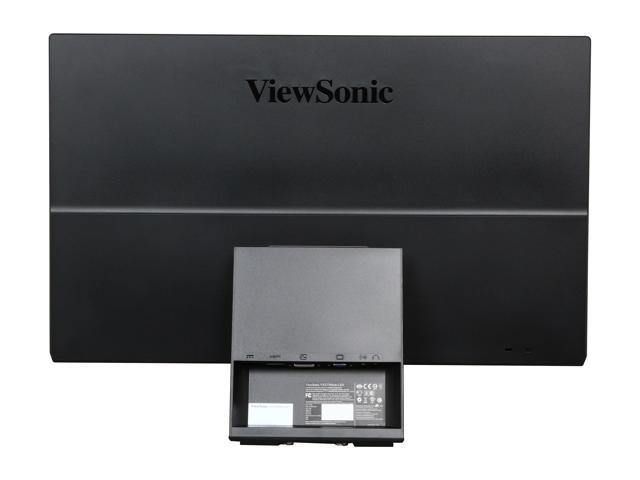 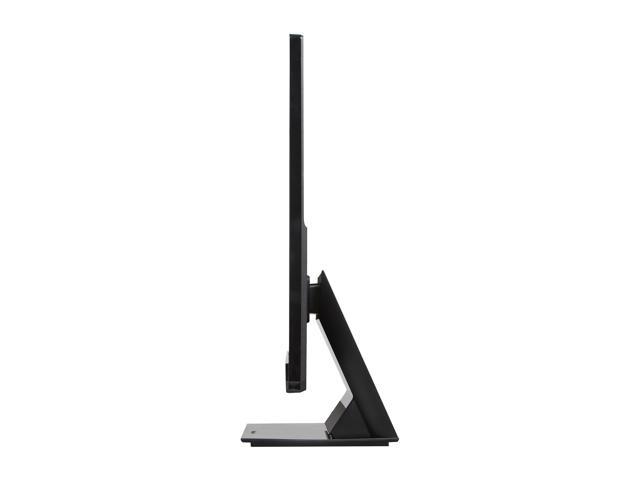 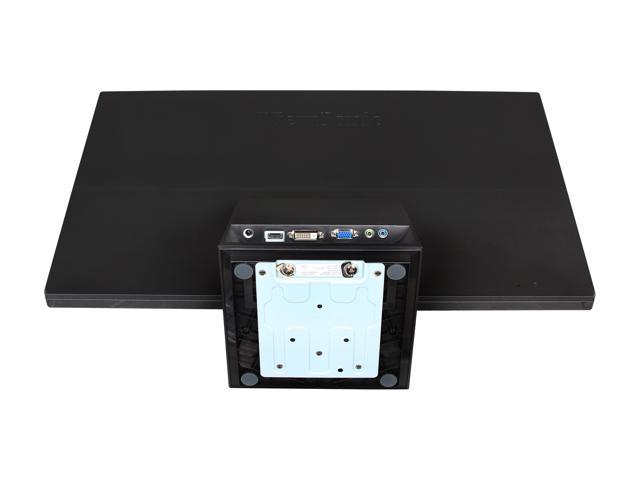 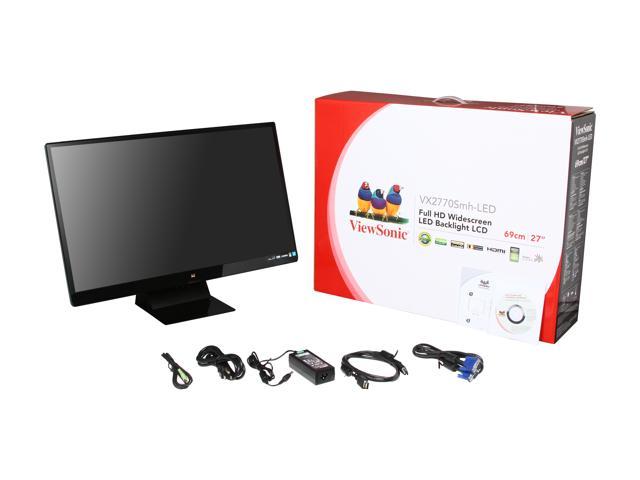 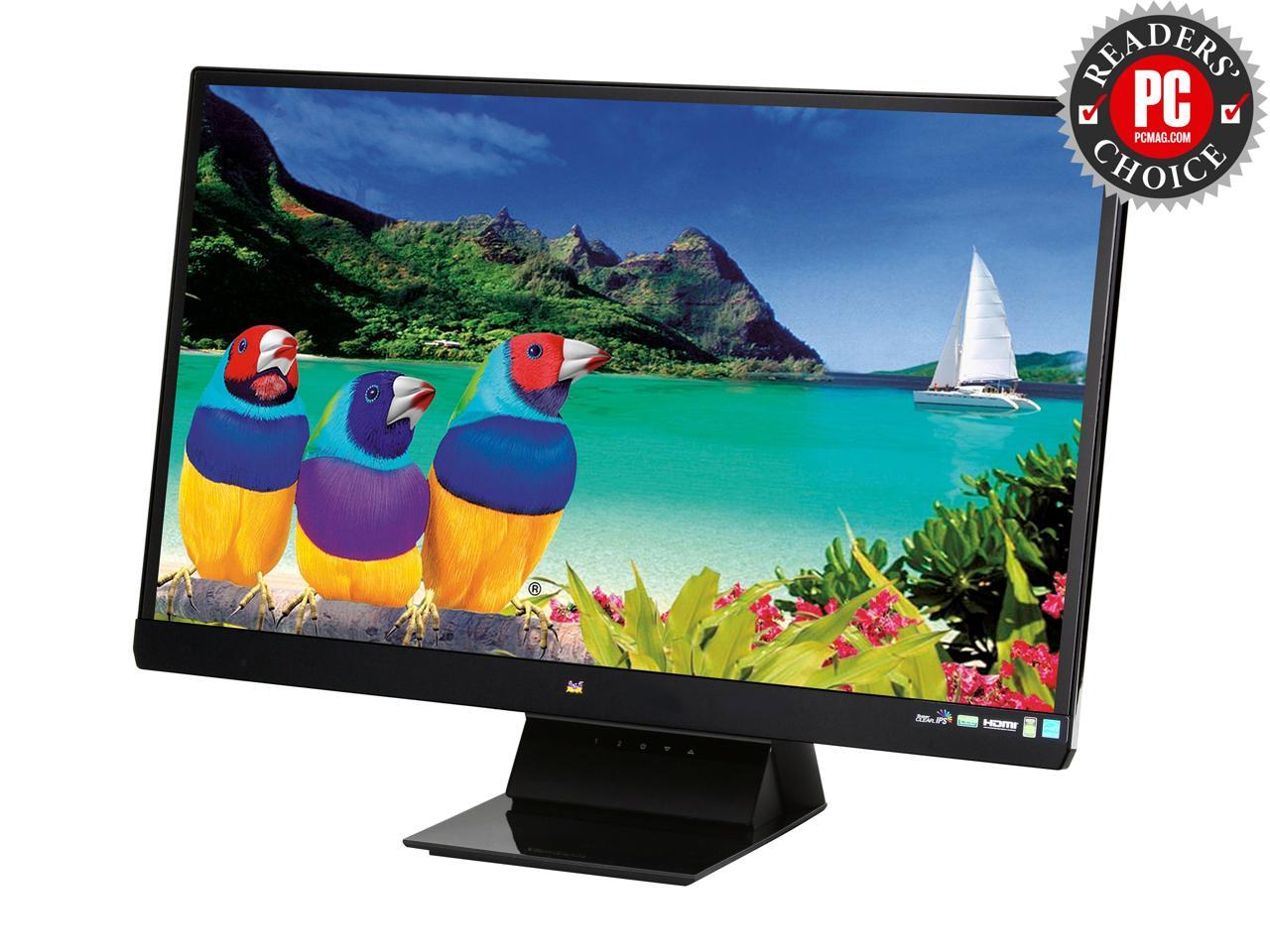 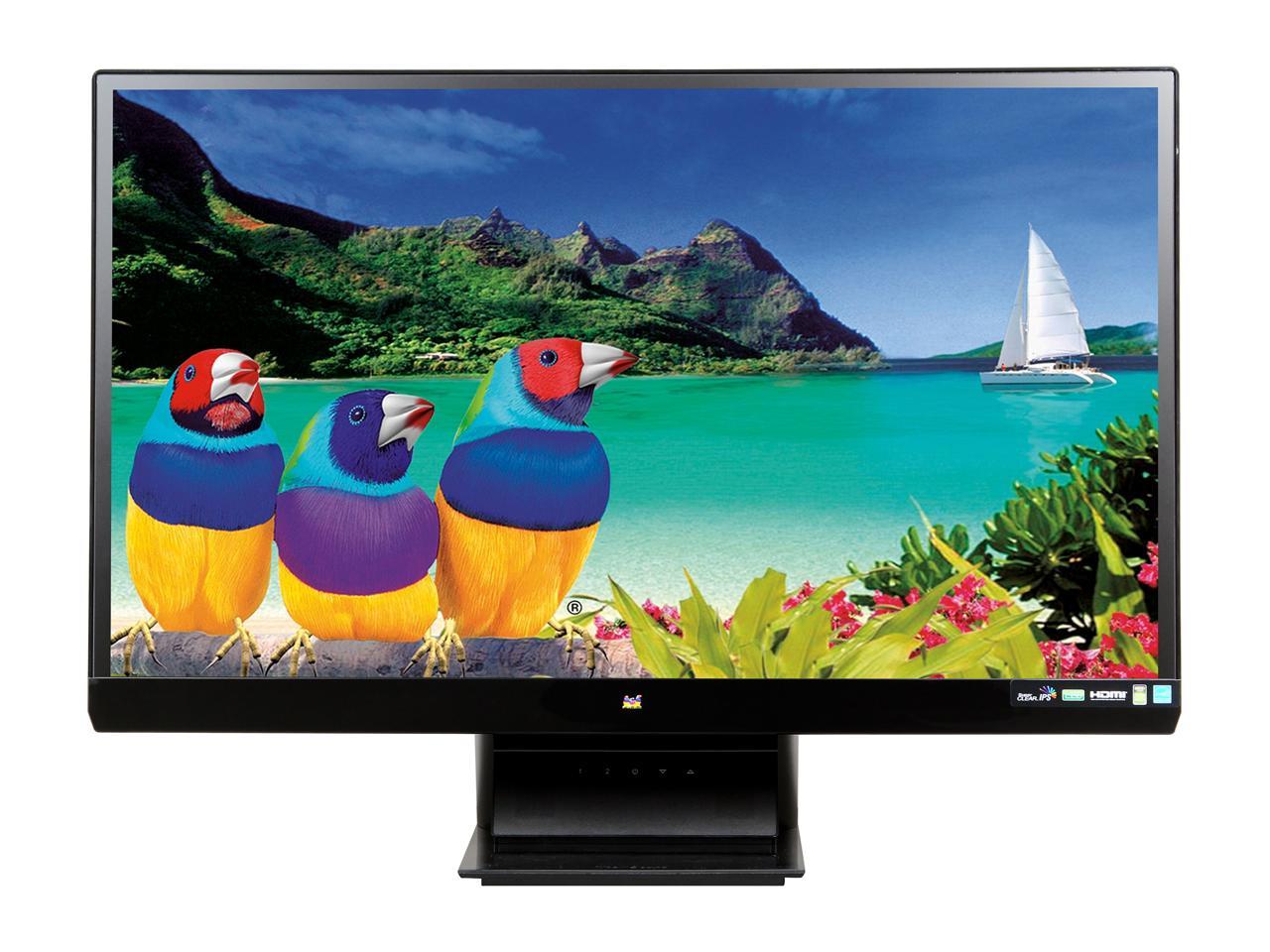 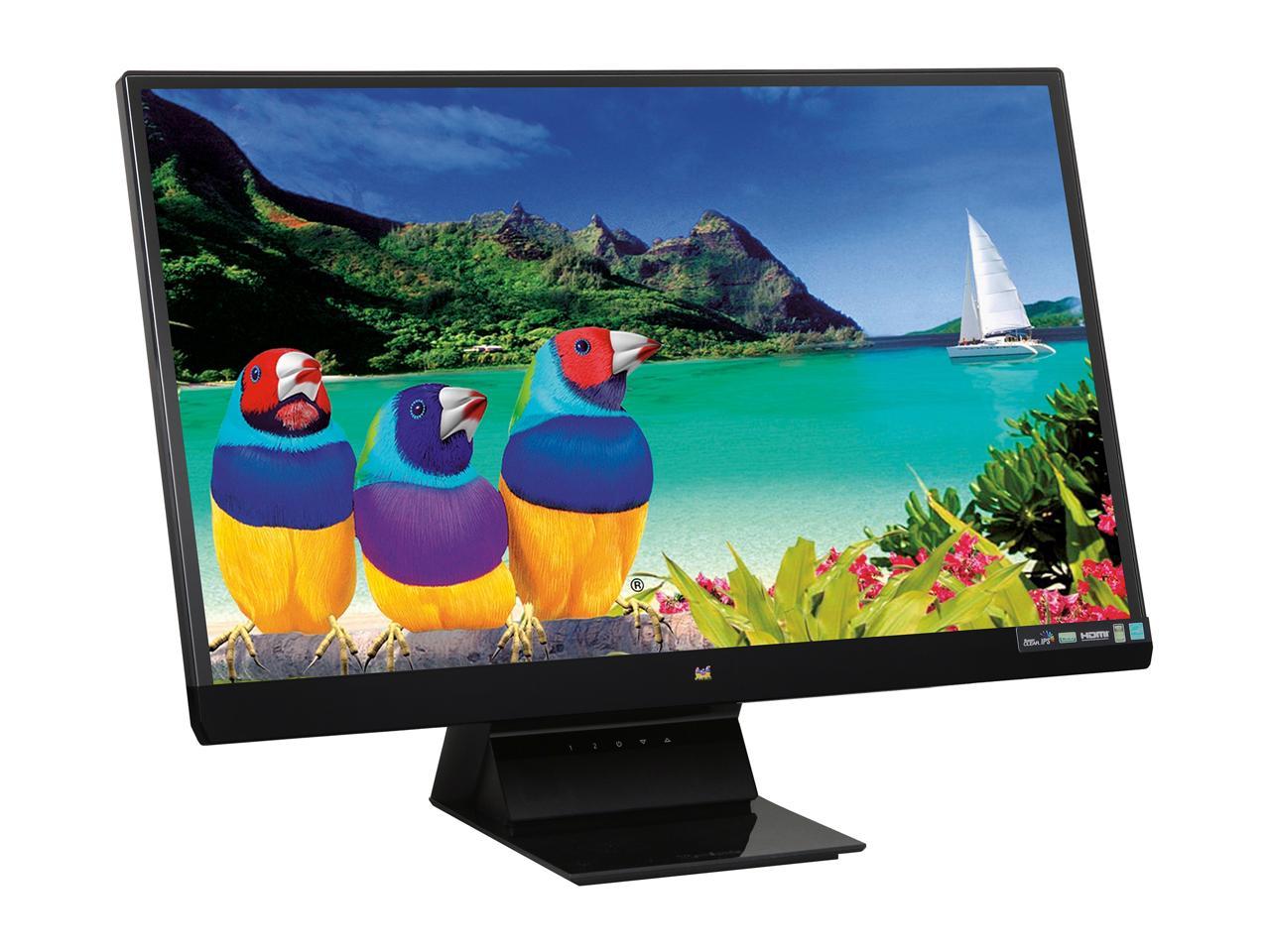 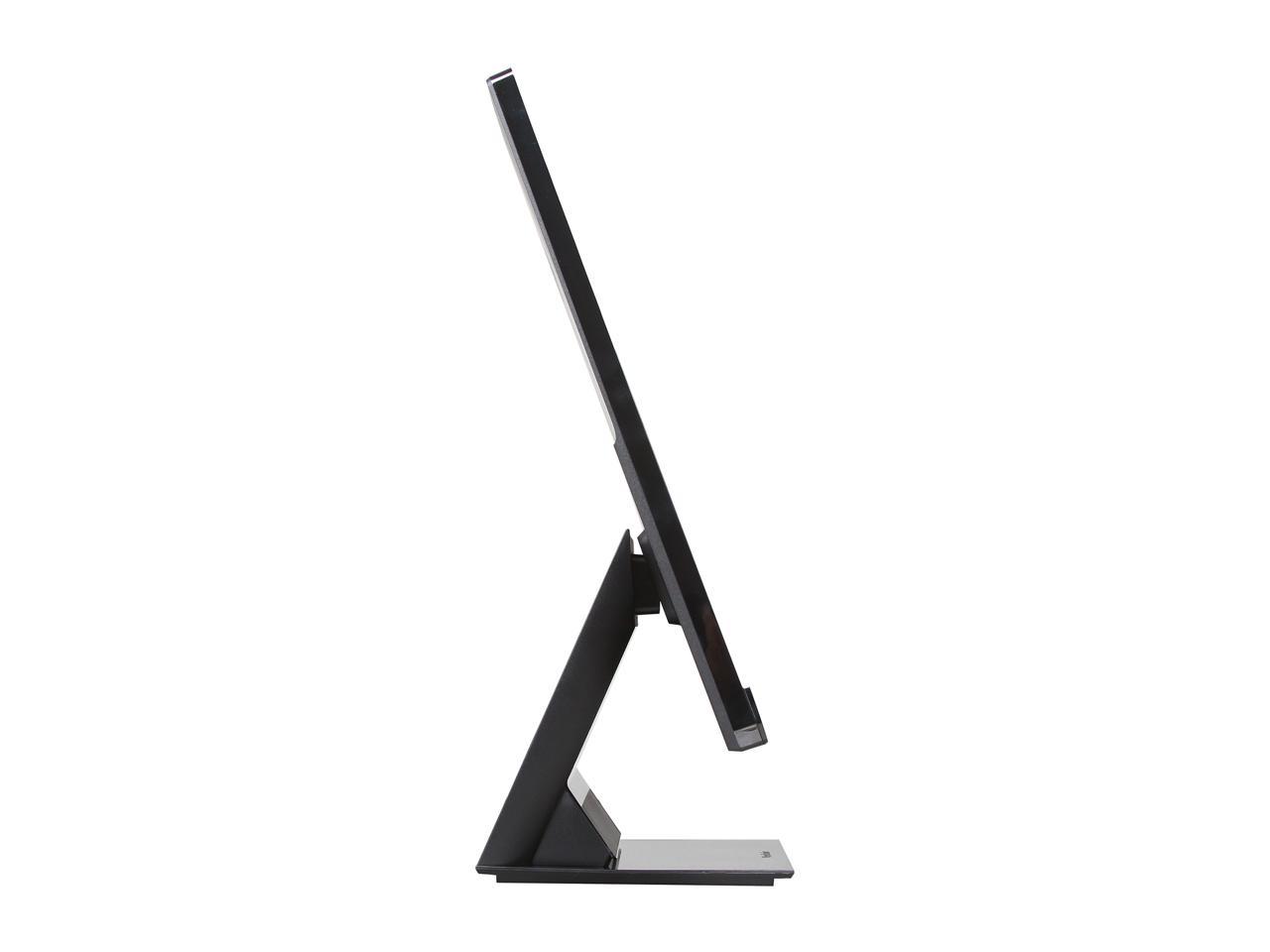 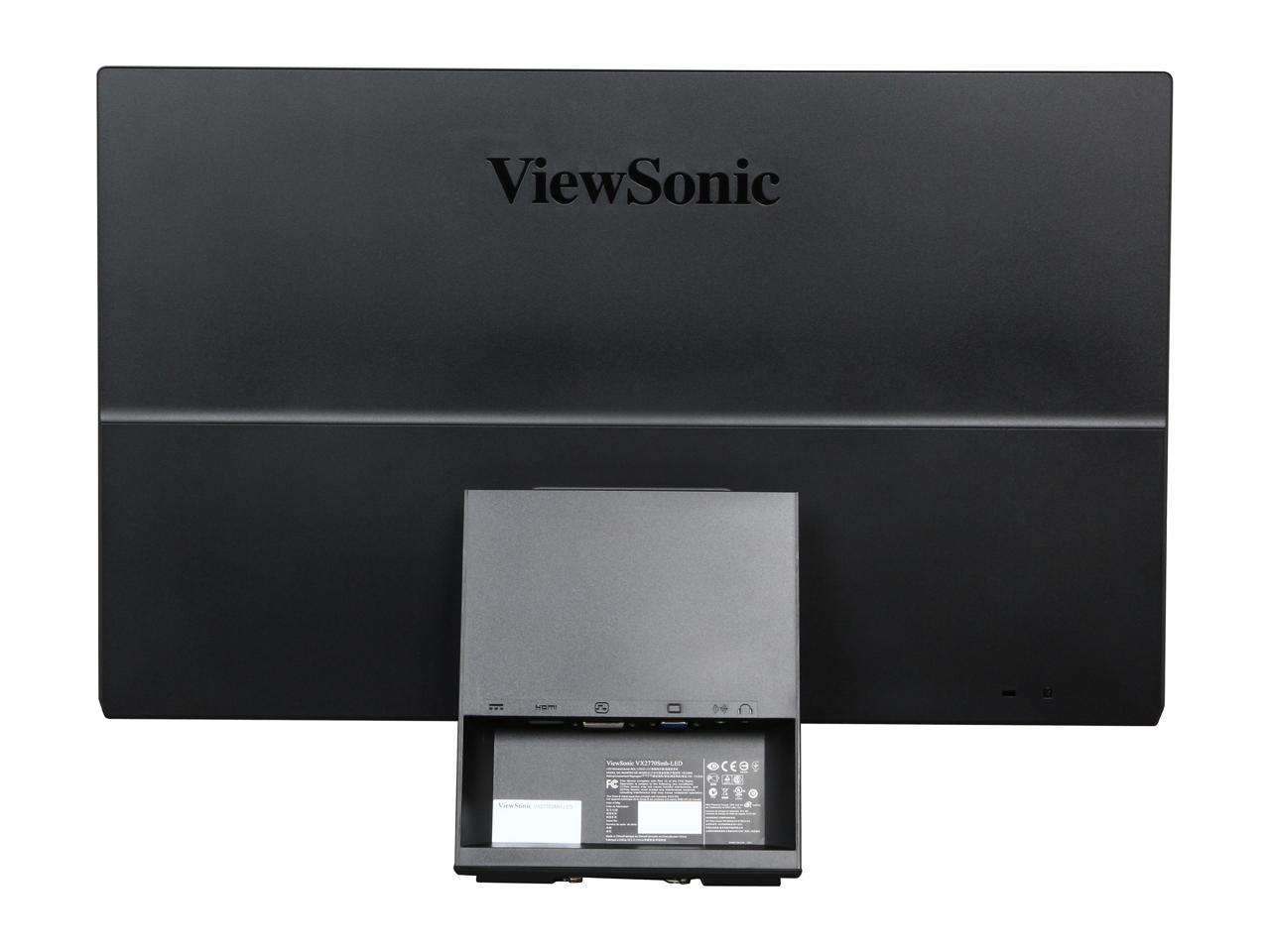 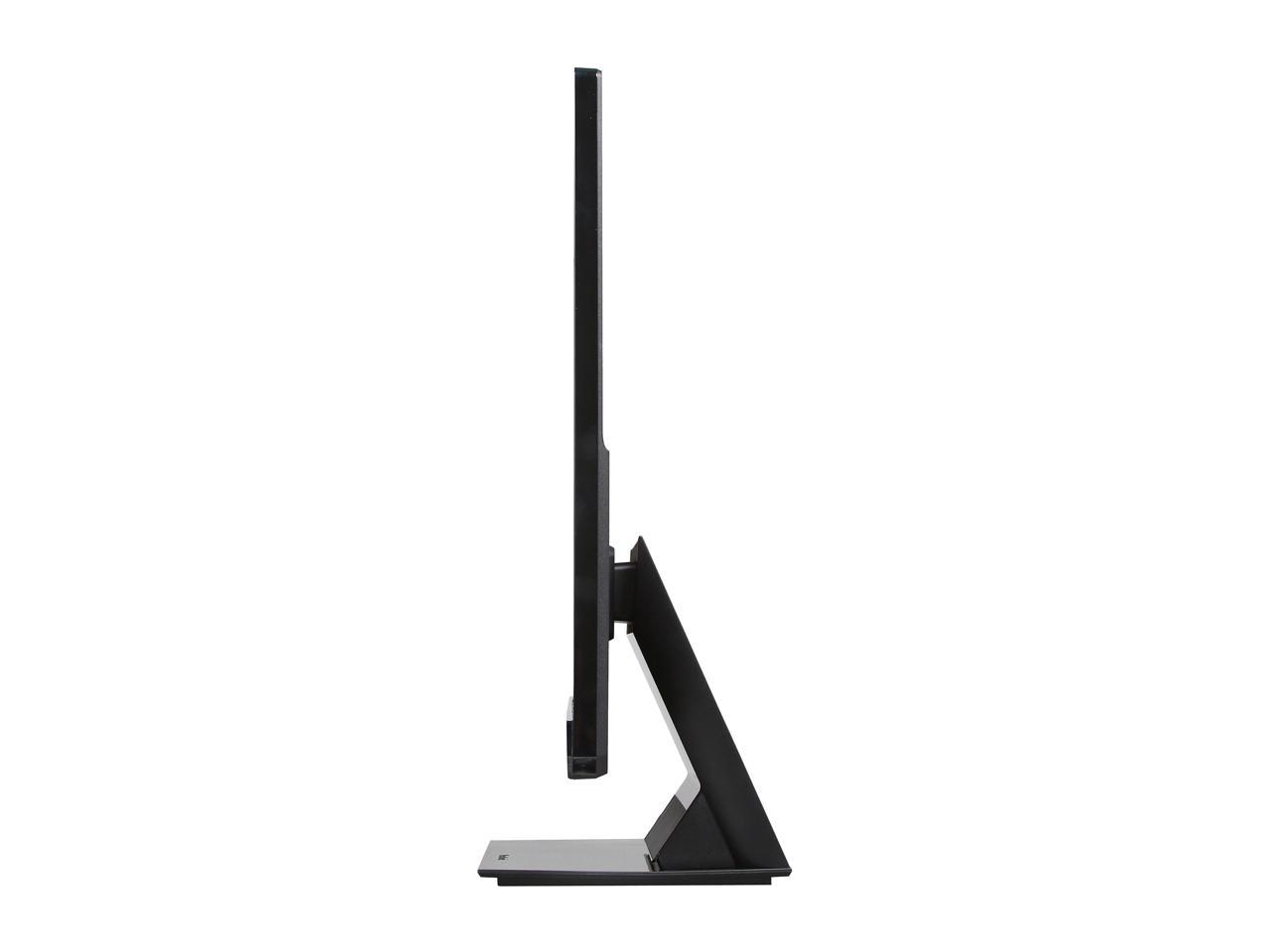 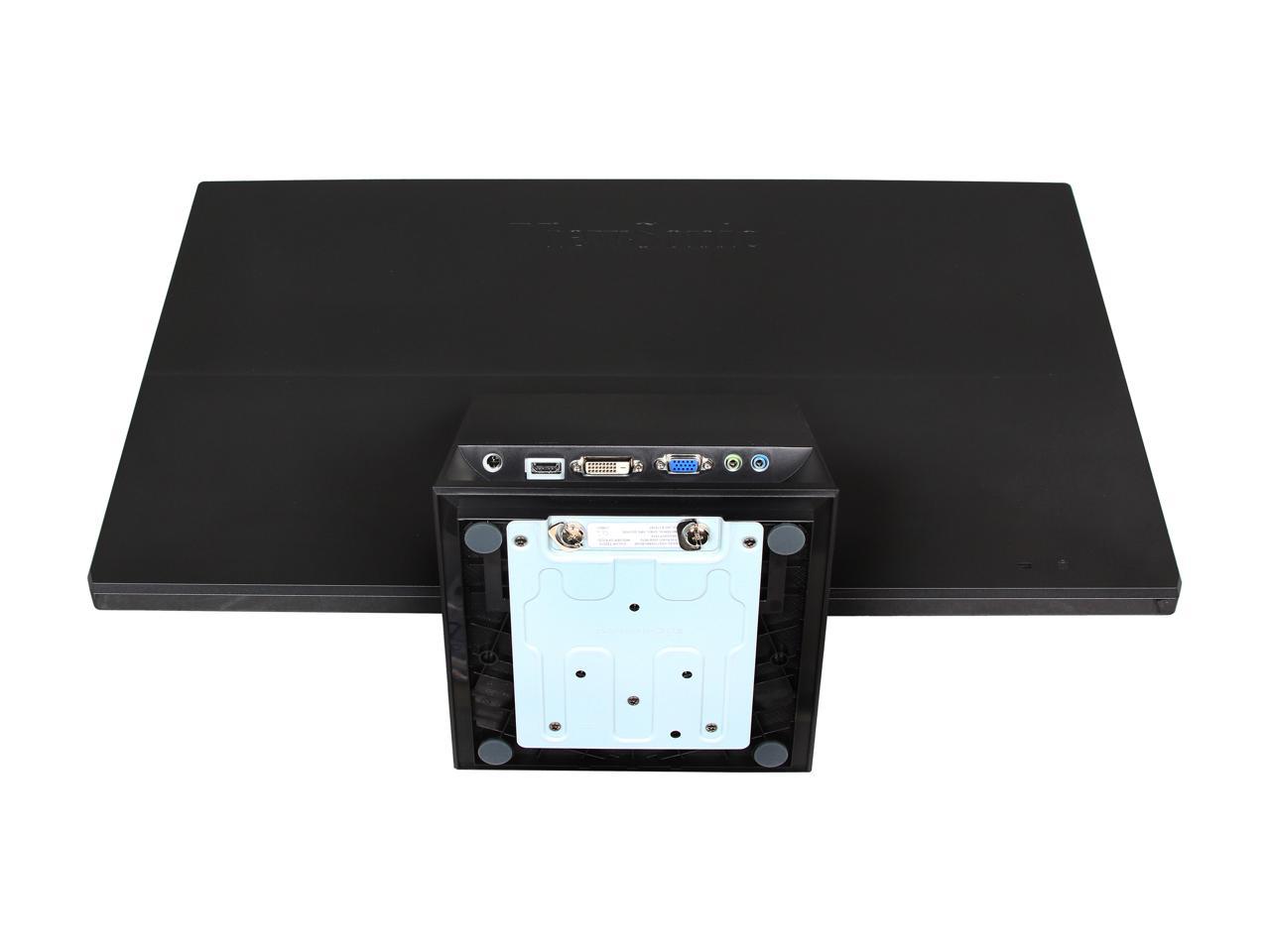 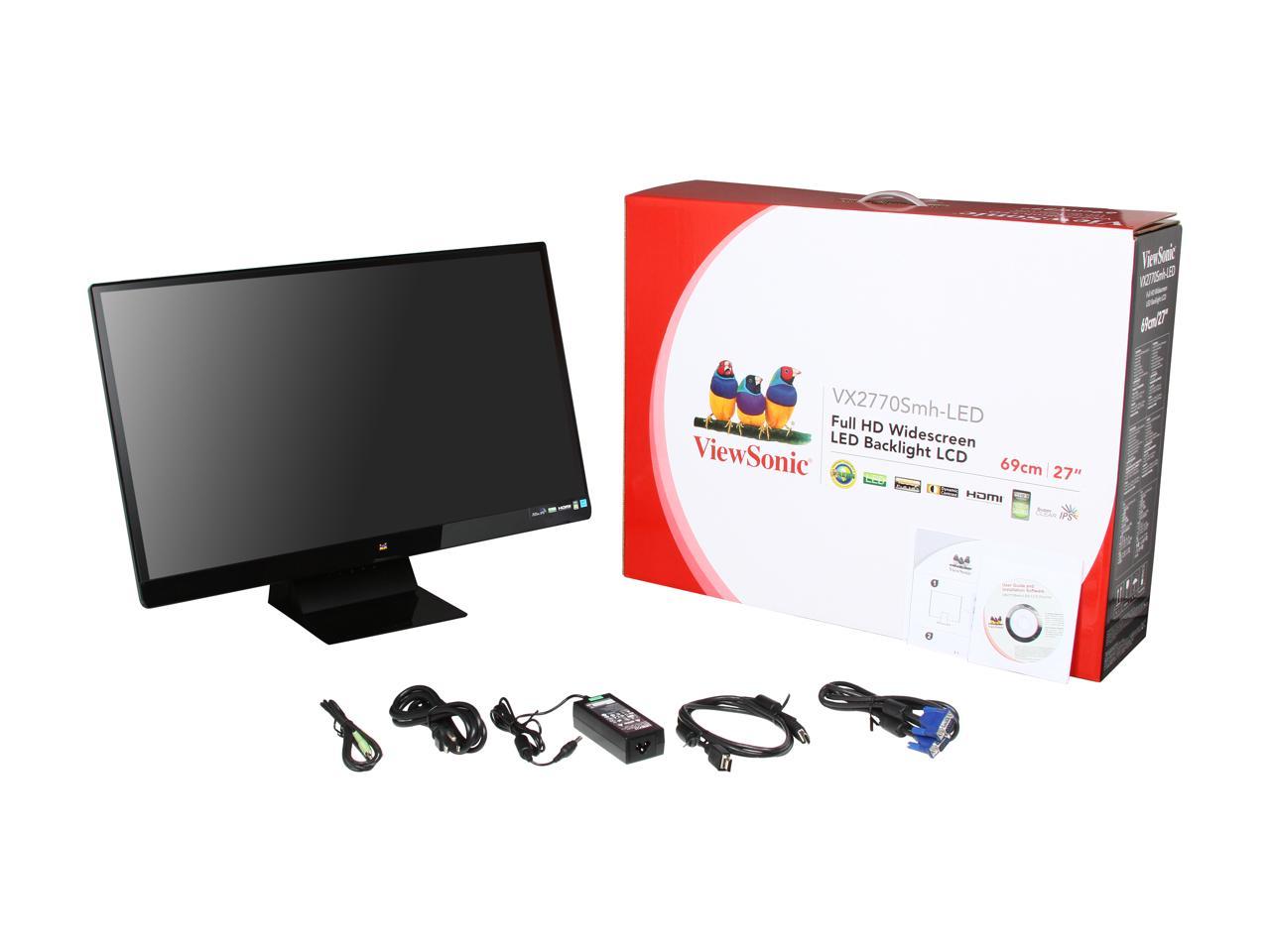 (78) Write a Review
OUT OF STOCK.
Overview
Specs
Reviews

Learn more about the ViewSonic VX2770Smh-LED

Pros: A few of the monitor's pluses: Bright - Very bright! Using DVI input, I really had to tone it down. It was literally lighting up my office in the daytime! Using on a Mac Pro - The font displayed is of good quality. Some monitors are simply not a good match for OS X's font format but this monitor works well. By the way, the included CD does offer a monitor driver for the Mac. Lightweight - You can lift with one hand and manipulate as needed. Sleep recovery - It resumes from a sleep state quickly! Very little delay, and I like that. It also does not attempt to roam the different video input ports. It immediately locks onto the signal it detects and runs with it. I have only tested the DVI input, so I cannot advise the quality of the other ports. No heat - A very nice departure from my former NEC roaster.

Cons: Now for some downsides: No electric eye - I am coming from a fading NEC 2690 monitor with a built-in electric eye to adjust its brightness from daytime use to nighttime. Again, this thing is so freaking bright, it's tough on the eyes at times. Color - It seems a bit washed out. Perhaps I'm used to NEC's vibrant colors from a $1300 monitor! The color quality is still acceptable with this unit but it's nowhere near the grade of the calibration capable models. Speakers - Meh. Don't bother. Get some decent amplified speakers and enjoy. No DVI cable included - Now come on, Viewsonic. You supply all the other cables *including* HDMI but no DVI? Not that I personally needed a cable, but it's the principle.

Overall Review: Overall, a 5-star purchase for the price class. One last comment. The display panel is NOT to the edge of the unit. There is indeed a 1/2 inch bezel between the panel and the outer case. So it is certainly not "to the edge" as one might think. Regardless, it remains an attractive unit which I am enjoying using. I miss my NEC but this is a newer alternative and it contains a decent grade IPS panel. You won't be disappointed. Newegg shipping first class as always. Thanks, Newegg!

Pros: This monitor is big and bright with great black contrast, it came with zero dead pixels, was extremely easy to thumb-screw the base on, it came with hdmi cable (bonus!), only needed minor gamma tweaking out of the box (that's just me being picky for doing graphic design work most people wouldn't have to mess with that), LOVE the frameless design it makes 27" look even bigger and more sleek. Another perk... the blue power-on light is on the base and is extremely tiny and soft colored so you barely notice it, it is not a distraction like on some monitors. Thank you Viewsonic!

Cons: All monitors under $500 seem to be going backwards in time from 1920x1200 to 1920x1080 to save money. To be honest I don't miss that extra inch of screen real estate. What you don't see you don't miss. I spend a lot of time in Photoshop and gaming and it hasn't been an issue. I'm only mentioning this because if someone is buying this as a 2nd monitor for dual setup the resolution difference might be an issue since there will be about one inch difference of screen real estate. The monitor comes with an audio cable, and while it does sound a lot better than many monitors it still has that typical tinny monitor sound. Great for general use for bleeps & blips and videos and soft music, but if you plan on blasting mp3's and game sounds definitely get a decent set of pc speakers because monitors just weren't meant to be a sound system.

Overall Review: ATTENTION GAMERS..... don't let people discourage you from this monitor, a lot of people will say that a 7ms response time is going to cause ghosting. While it might in other brand 7ms monitors with cheap video cards, it has not on this one. On high settings I've tried Guild Wars 2, Skyrim, Call of Duty, Assasins Creed 3... NO ghosting, just a crisp beautiful flawless vivid picture. My first IPS monitor, very impressed so far. I needed a solution for both graphic design work and gaming and this was a great solution. I replaced a 27" Samsung that I loved for years but the brightness finally gave out on that. I like this Viewsonic a lot better. The colors are more vivid, and the thin frameless border makes it look even bigger than my same size Samsung. The only other thing I can think of is that the adjustment controls (brightness/constrast/etc) take some getting used to, but I have that issue on every monitor hitting the wrong buttons getting frustrated until I figure it out since I don't bother to read the manual. :)

Cons: Buttons (power button, menu button) don't have any bumps on them so it's hard to tell what button you're pressing without craning your neck down to see them Resolution is only 1080p and the monitor is a full 27 inches. Ideally, the resolution should be higher, though of course the lower price reflects this. For general use, it's no problem. If you have to have the absolute best monitor, well, be prepared to spend $300 more or wait a few years.

Overall Review: Looks very nice surfing the internet, watching videos, playing games, and all the other general-use stuff I've tossed at it. Bright and beautiful. I upgraded to this monitor from a 19 inch LCD TV with a max resolution of 1360 X 768. I'm probably not a very harsh critic of the monitor because it's so much nicer than anything else I've ever gotten to use, like, ever.

Pros: Nice looking bezel, excellent colors, HUGE screen. Coming from a 22" screen, this one Ddefinitely adds much more immersion when playing Battlefield. Speakers are decent for what they are. And the cost of the monitor is relatively cheap for a nice IPS display. Props to Newegg for their fast RMA turn-around (see cons).

Cons: Went through two of these before I finally got a defect-free one. First one had crazy light bleeding coming from the bottom left corner, the second one had a dark blotch on the upper right corner of the screen. It's important to note that this monitor suffers from some very obvious IPS glow. Looking at the screen from the left, there is a reddish tint, and looking at it from the right there is a blueish tint. Not that big of a deal, but noticeable during dark scenes of media. What's with the awfully placed touch buttons? I literally have to peek under the monitor to press them. Hard tactile buttons would've been better. Also, why doesn't this thing swivel or even have a VESA mount? Even my 200 dollar Asus LCD has VESA mounting.

Overall Review: "IPS Glow" changes depending on what angle you view the monitor from. "Backlight bleeding" doesn't. This monitor definitely suffers from IPS Glow, but it's really not too bad. This monitor is 1080p. I originally wanted a 1440P but I couldn't justify spending almost 100% more for those displays. Don't listen to people with graphics OCD on the internet saying 1080p at 27 inches looks super pixelated. It's not and my games look great at 1080p with minor AA. "Downsampling" helps a ton, too!

Cons: No height adjustment. Stand is a bit wobbly. Controls are badly placed. Sound from built-in speakers is really poor.

Overall Review: I really wanted a 27" or 30" monitor with higher resolution but my 40-something eyes can no longer handle the dot-pitch on those monitors. I would have liked the HP Envy 27" 1080p with its superior sound but the glossy finish on it was a deal-breaker. So it was between the ASUS MX279H and this and I couldn't justify the $100 higher price for the ASUS. I'm happy with the Viewsonic for the price.

Cons: Came with out of box problems, stuck pixels covering 1/3 of the entire screen, not many setting options, light bleeds through from the edges and when playing dark games its so bright its very hard to actually see the game. its like glare but in a pitch black room. My 6 year old Samsung monitor has better viewing angles because of this.

Overall Review: Customer service wont stand by their product that they made faulty and is not willing to cover return shipping so I'll buy from someone else. If they cared about their products they would be willing to make their errors right and to please their customers. not drive them elsewhere. Sadly newegg doesnt pay for RMA shipping for such things that cost a ridiculous $20 to ship...

Pros: Really impressed with the overall quality of this display. I had low expectations because of its cost, but was wowed in the end. -No dead pixels -Very small bezel -Exceptionally thin & light -Perfect size & resolution for a single monitor setup -Extreme value, until you see an IPS monitor you don't know what you're missing

Cons: Despite its great value, and superb quality of the display itself, there are concessions to be aware of. -While monitor itself feels sturdy, the stand is plastic and barely seems to support the light weight of the display -Sound on speakers is subpar, don't count on using them.

Overall Review: Here are some things I encountered that might be helpful, if you find yourself in the same situation. -ATI underscans HDMI output by default by 15%, you'll need to open the Control Center to fix this. The picture will not fill the display otherwise. -No DVI cable is included. No where did it say one would be, but be aware of this. -Update your mobo's firmware to make sure HDMI output works correctly. Mine wouldn't display a picture during the boot sequence until I updated.

Cons: Only 1920x1080 (I can live with this) Menu buttons a little hard to change settings with, only because they are partially hidden and dark, but not a big deal at all.

Overall Review: This is a great monitor, it has good brightness, as well as clarity and contrast. Being an IPS monitor, I was very afraid of the problems that usually plague IPS monitors, mainly backlight bleeding. I'm happy to say that this monitor has zero backlight bleed and looks great. Also, the stand that this monitor has is very, very sturdy. My last monitor was also IPS, but two main problems: the stand was incredibly unstable, and the screen had massive backlight bleed. This is a great monitor, some people may complain about the 27" screen with 1920x1080, and while on some things you can tell the pixels are stretched, 95% of the time, it is not noticeable. For a 27" IPS monitor to look this good, feel this good, and cost this little? Well, that's pretty amazing. I highly recommend this monitor to anybody that wants a 27" and IPS, but don't want to shell out 700$ for one. You won't be disappointed in this one.