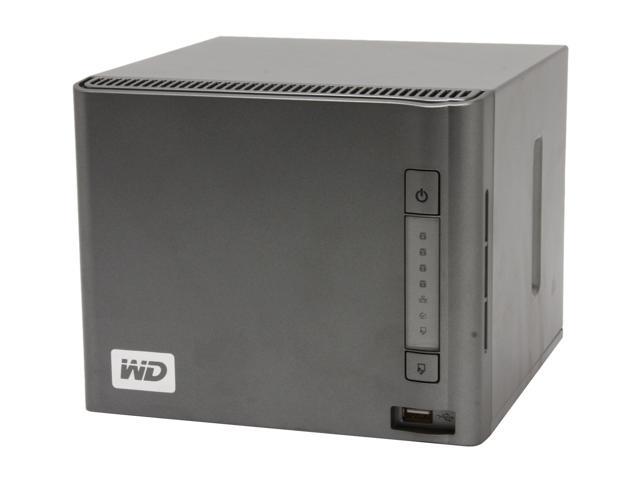 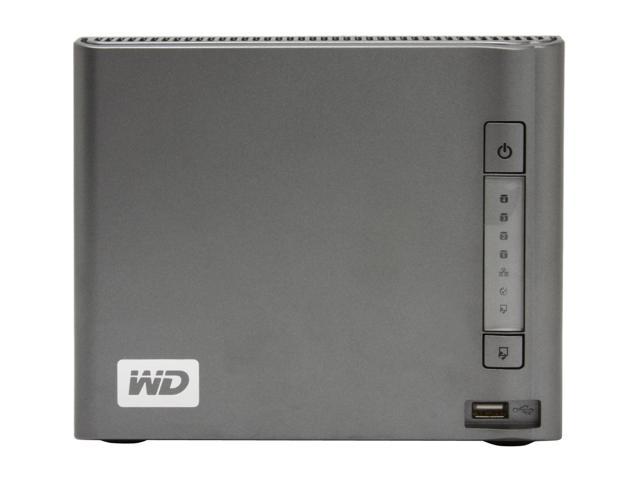 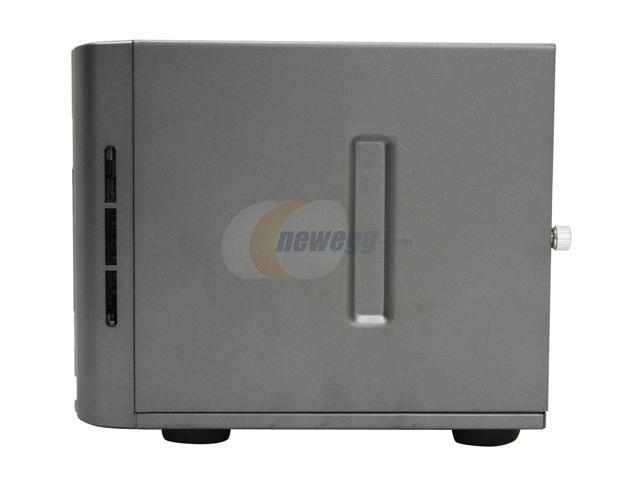 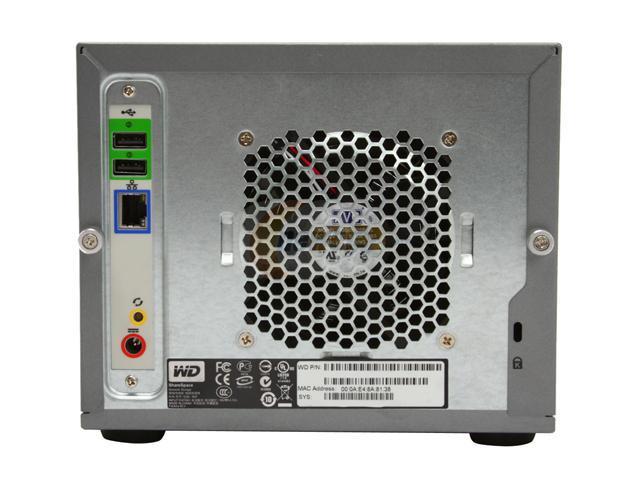 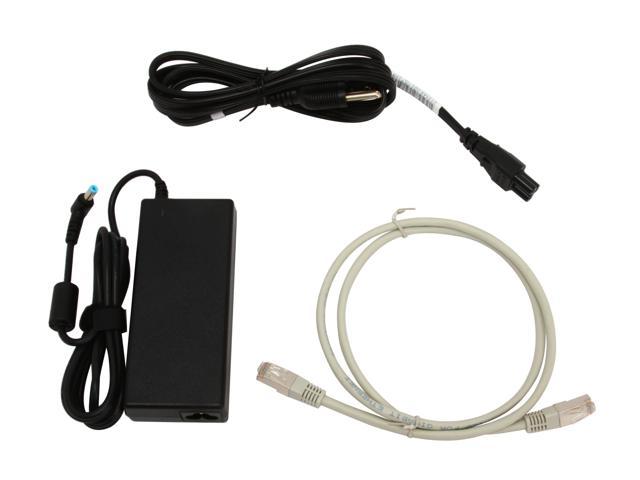 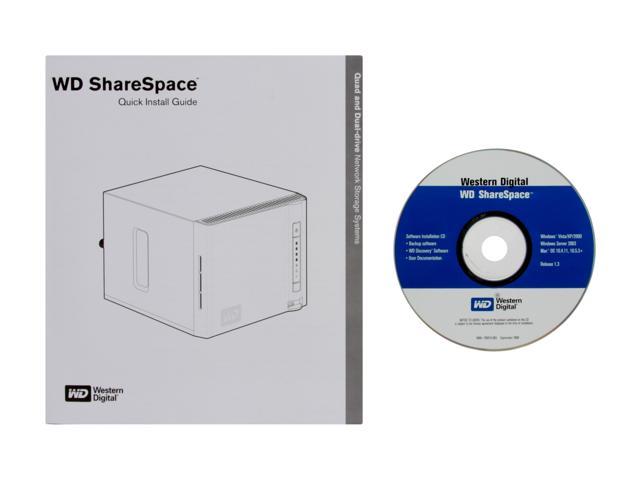 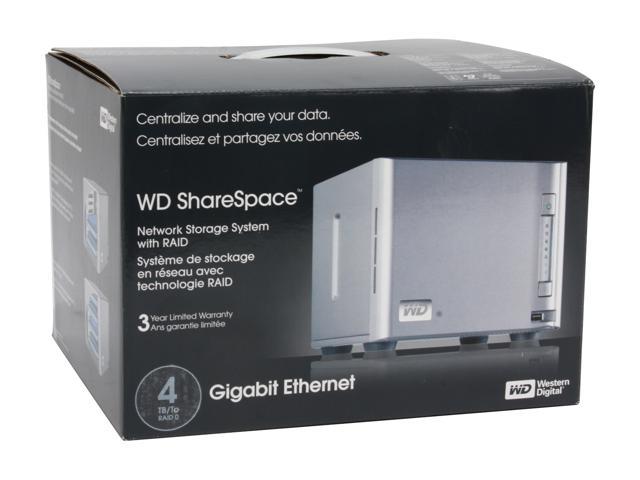 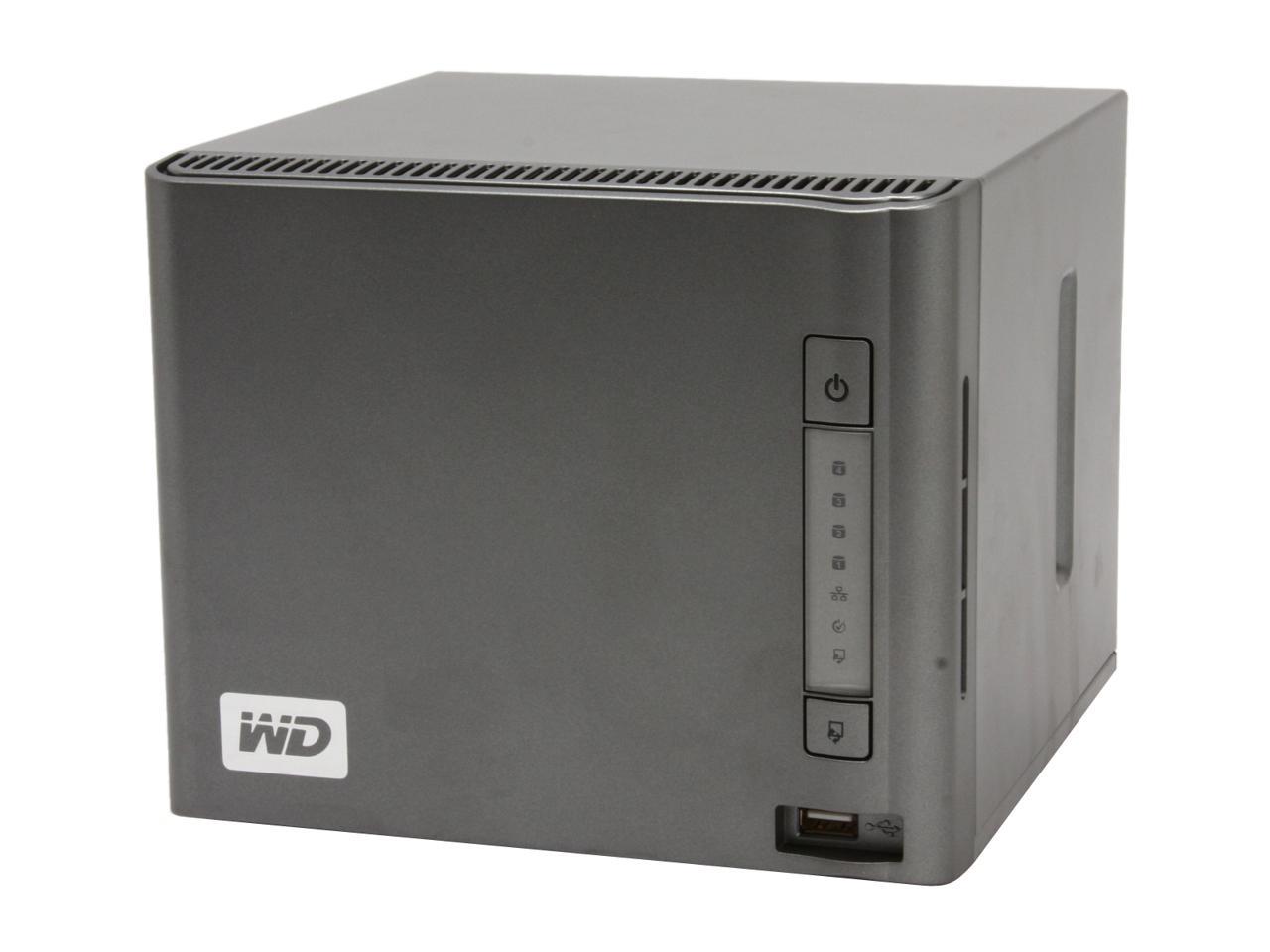 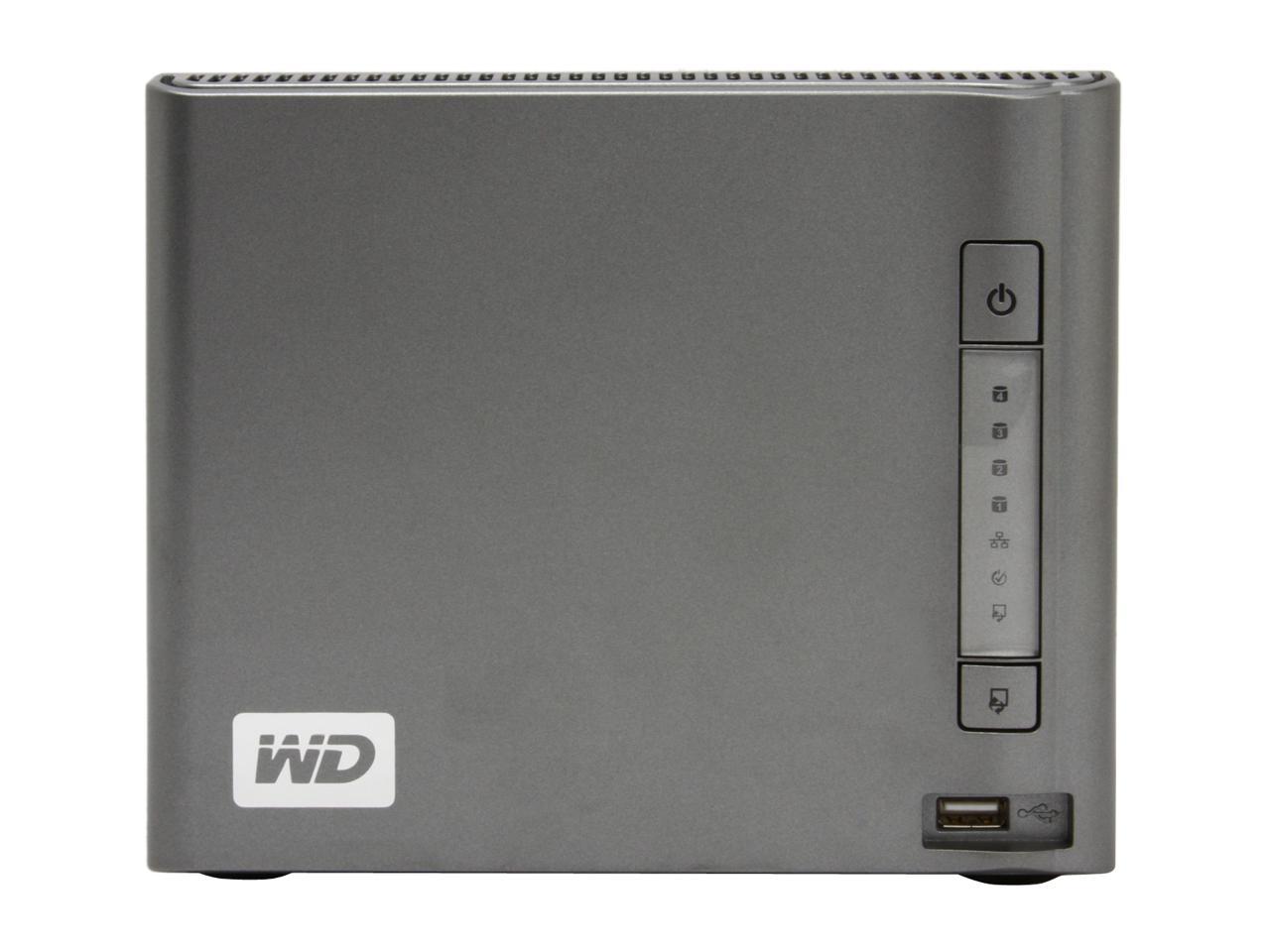 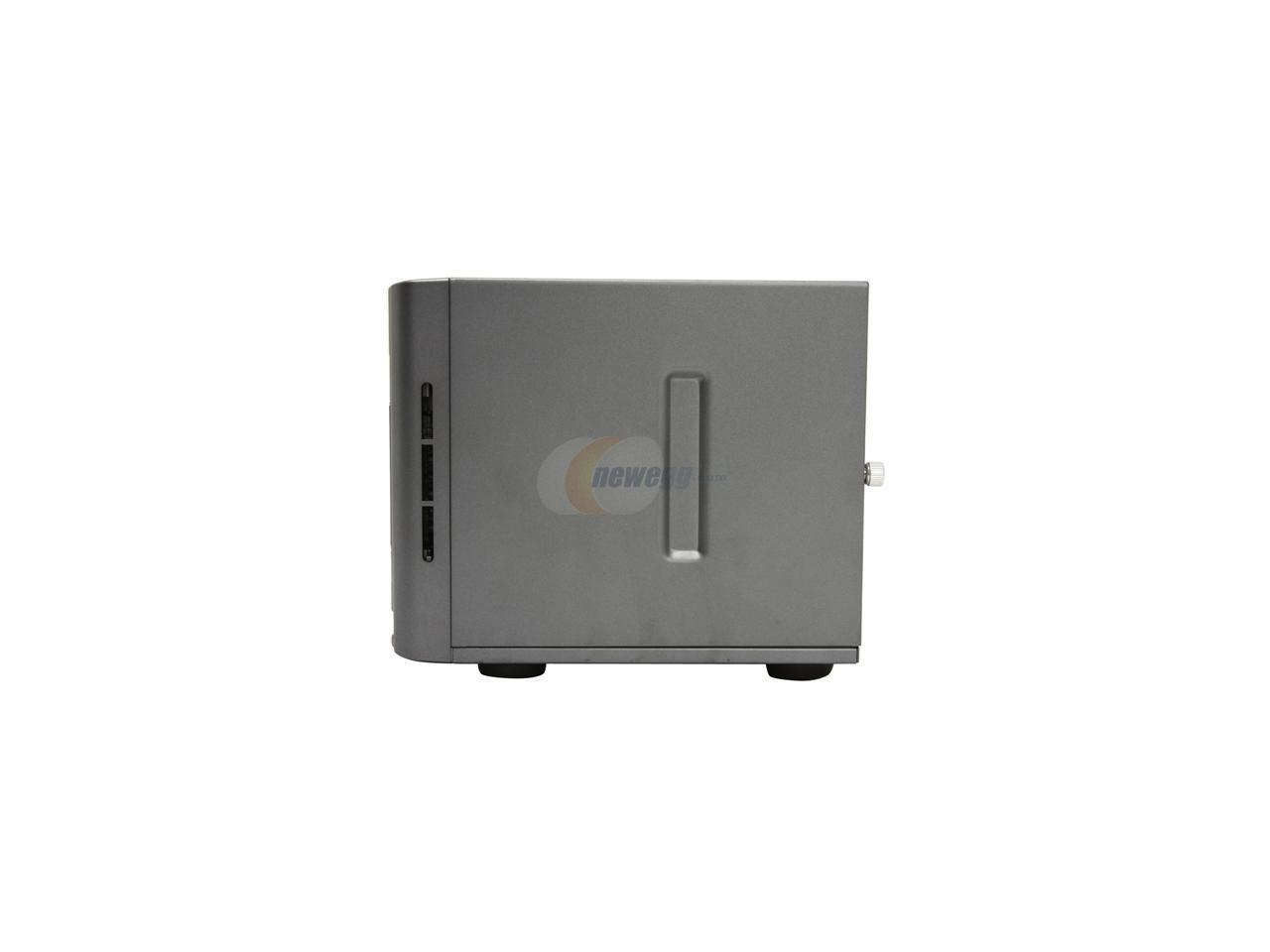 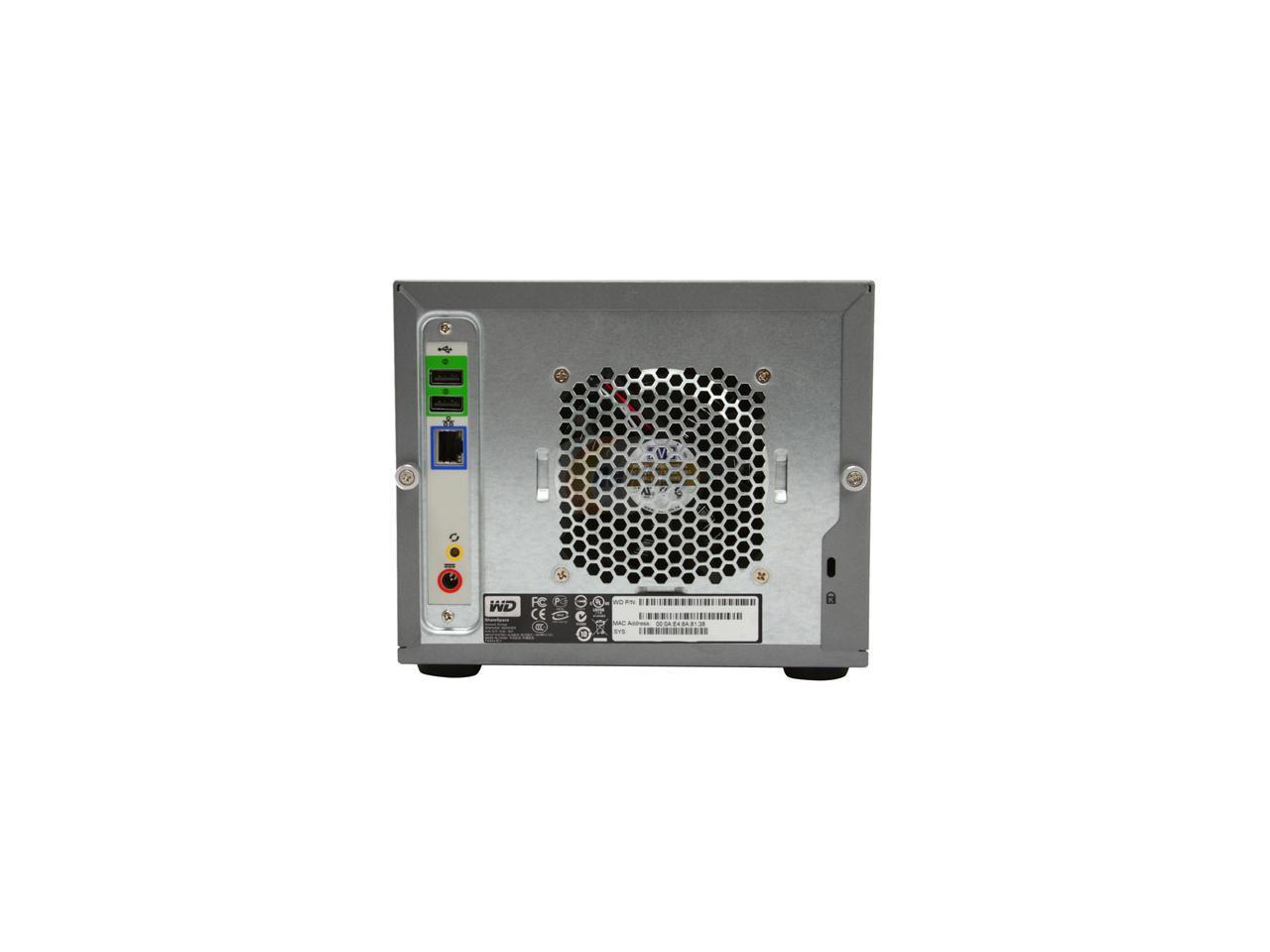 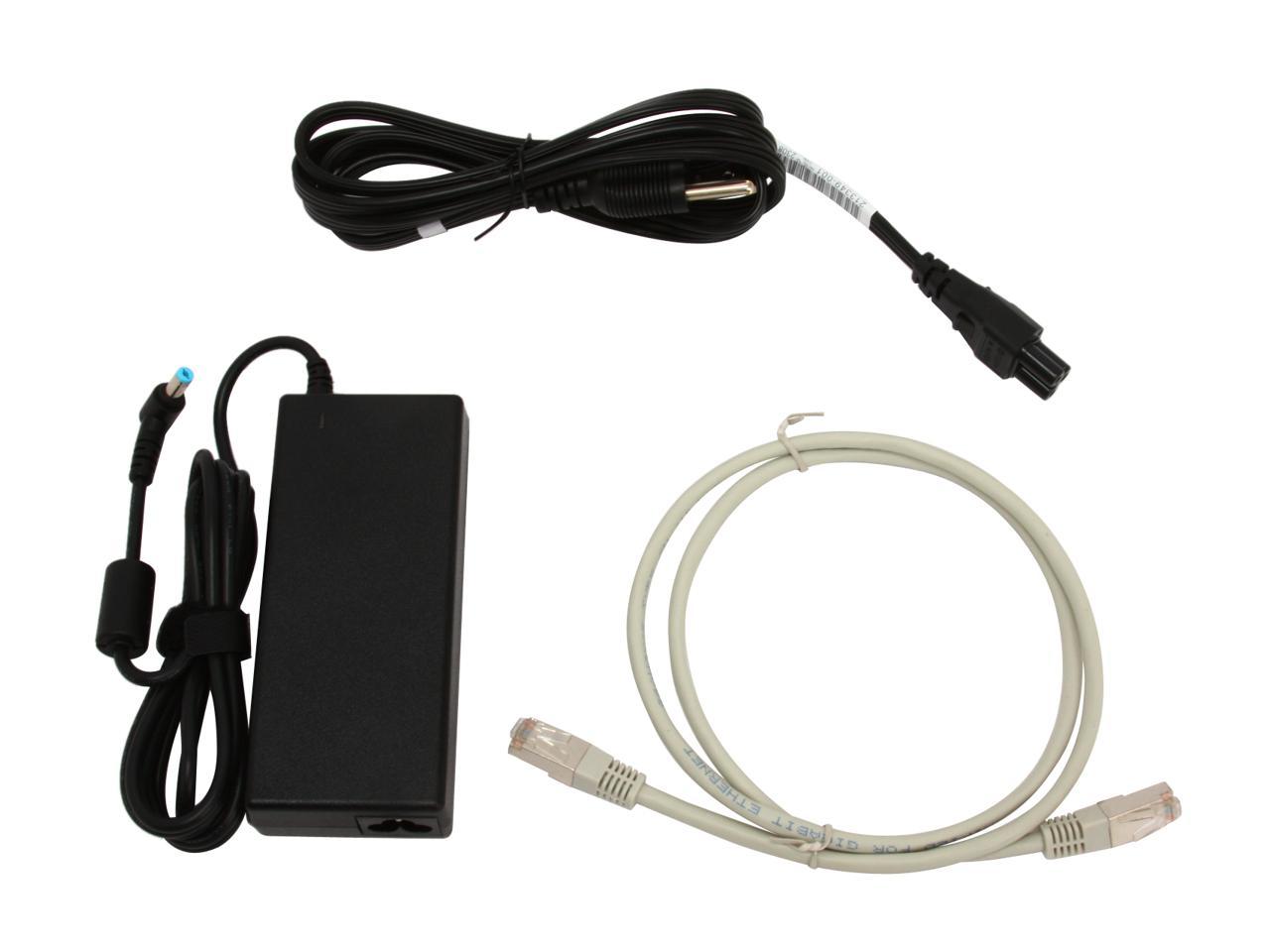 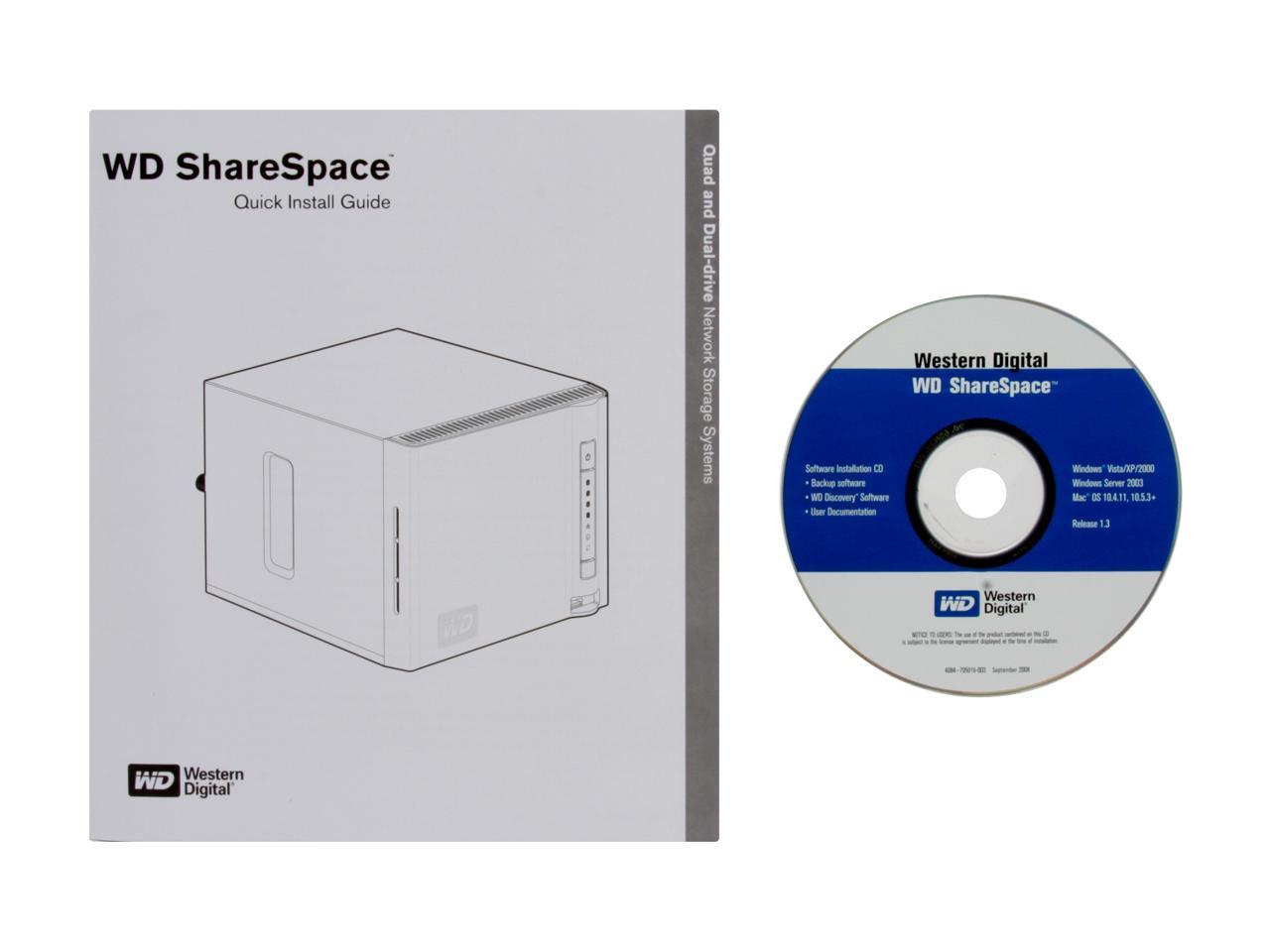 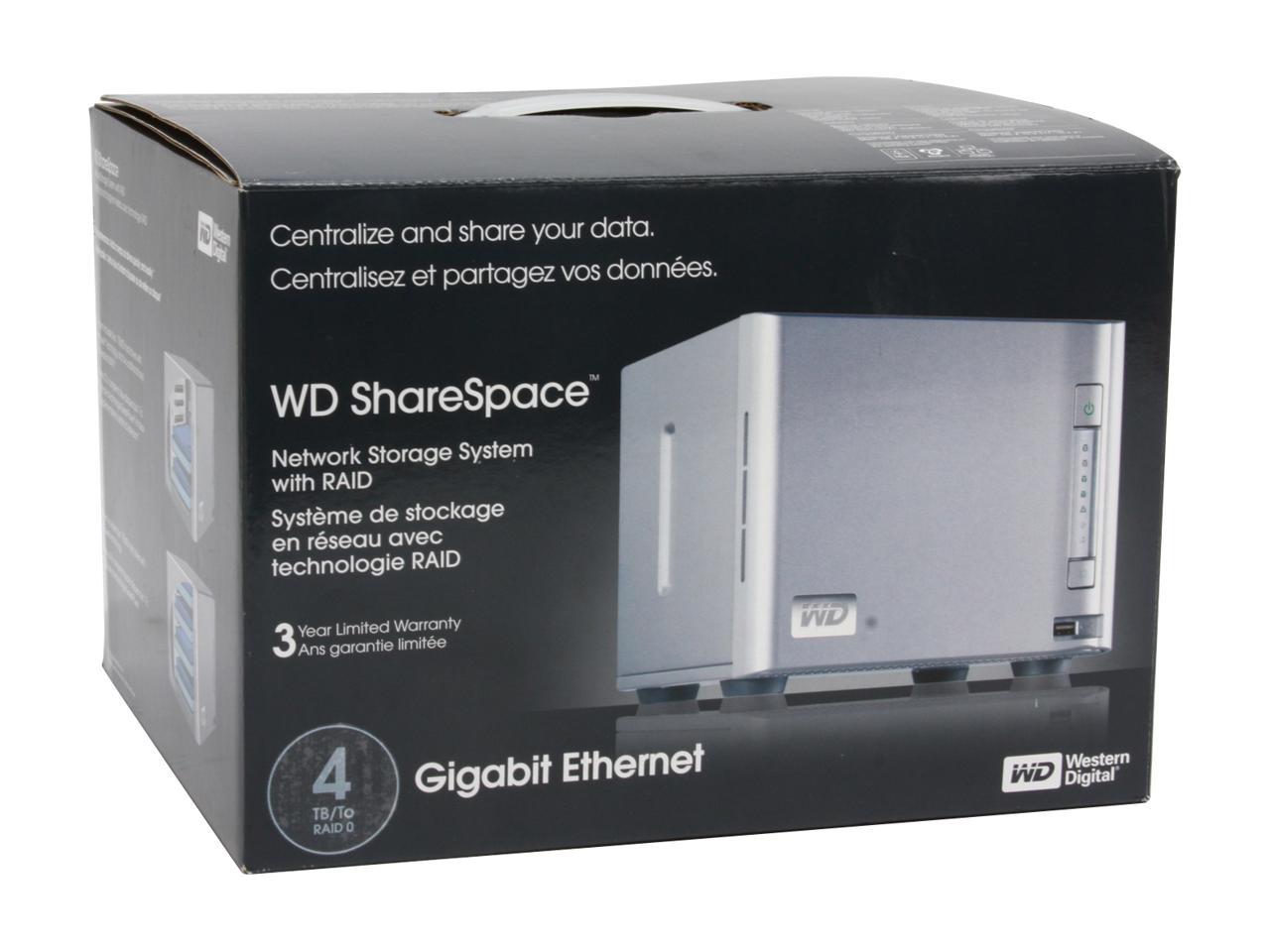 (51) Write a Review
OUT OF STOCK.
Overview
Specs
Reviews

Pros: Works right out of the box. Size is great (both physical and storage capacity). More stylish case than most other NAS solutions.

Cons: The LEDs are a bit annoying as they are fairly bright. Nitpicking really...

Overall Review: Plug it into the network and go. you don't need the software on disk as the device has a http interface. it comes with raid5 setup out of the box. 22Watt at idle 32watt at load my performance numbers were better than the other reviewer. i believe he was limited by 100Mb ethernet. i ran this on a gigabit lan and got 17MB/s read 13MB/s write the noise level from the fan is barely audible, so unless you're in a zero-noise environment you won't even hear it.

Pros: Color me impressed. This is THE best solution for integrated home network backing up and storage. Setup is a breeze, and by breeze I mean plug it into the router, turn it on, run the discovery software on the CD. Done. More advanced users may instinctively throw out the CD as soon as the box is open, but I'd recommend keeping it as it provides a more convenient method of naming the device on the network. Functions flawlessly in Vista and XP. Has its own device specific shell icon in Vista which is nice. Transfer speeds on a 10/100 based network are a consistent 9MB/s. On a gigabit LAN the speed increases to 15MB/s. Runs cool even after a massive 300 GB transfer. I have it sitting 6 feet from me and I cannot hear it, save for an occasional hard drive access. FTP access works perfectly, and will fully utilize your internet connection's upload bandwidth. User specific permissions are nice and work as expected.

Cons: The Mionet remote access software that comes with the device is junk. After 2 days of tinkering I finally contacted tech support which gave me the typical "is it plugged in?" run around. Oh well. I'm not dinging an egg, because FTP'ing is more straight forward anyway. Would not recommend this in a business environment with more than 3 concurrent users as access is too slow. And speaking of access speed...see Other Thoughts.

Overall Review: When this device was first released, its network transfer speed even on a gig LAN was dismal. However, a firmware update released by WD has greatly fixed that. Do yourself a favor and update the firmware through the web interface before you do ANYthing else. Also, the device ships in RAID 5, so you will only have access to 2.68 TB of the potential 4 TB. While you can change this via the interface, the data integrity you get from RAID 5 is worth it, especially considering this is for backing up stuff.

Pros: Easy setup (already in RAID5 config.), needs very little space and is extremely quiet. Inexpensive for what you get. The management software is nice for those who do not know how to do the stuff manually like setting up shares and mapping drives. Ease of use for novice networking people is great for the average person.

Cons: Does not come with the WD back-up software only a 30 day trial version.

Overall Review: I have used NAS/SAN devices before on 2 large networks (over 5000 users and over 1500 net clients) so this scaled down version is new to me. I installed this for a friend of mine for his small business. 4TB will be serious overkill but for the price and the somewhat fault tolerance of RAID5 (recover from a single drive failure) it is perfect. This would be a great solution for a home network that has an HTPC on it or even an X-BOX or PS3. Gobs of storage for sure. This is not a large or even medium business solution so do not expect it to be. Read the description at Newegg and WD, if it doesn't do what you want it to then don't buy it and rate it as if it were supposed to.

Pros: Very easy to setup, and configure for a home or small office setup

Cons: This device seems to have a fatal flaw when operating in RAID 5. If power is unexpectedly lost to the device while it is performing a RAID filesystem check (which can take many hours) the RAID configuration is lost and the device believes one or more drives have failed. Currently the only way to recover from this is by manually rebuilding the RAID array from the command line. WD is aware of the problem, but as of yet, they have not released a firmware update to address this issue.

Overall Review: Before the above issue, the only other issue was that the write speed across the network was not very fast. I've seen some complaints about this on WD Community forums, and it may have been addressed in a firmware update, but the updates are not yet available.

6 out of 6 people found this review helpful. Did you?
Manufacturer Response:
We apologize for the inconvenience you have experience regarding our device. RAID 5 is a format of RAID that allows for data to remain intact should a single drive fail within an enclosure. We would like to further assist you in resolving any issue you are having with our product, as the behavior you are experiencing it not typical of our device. If you would like to contact us for further support, please visit: http://support.wdc.com/rs/ Copy and paste the URL of this review where indicated and provide the requested information and one of our technical support staff will be contacting you regarding this issue. You may also contact us at 1 (800) 275-4932. In the future, you may also want to consider posting your issues to our WD Community where you can interact with other WD customers. www.community.wdc.com
Anonymous
Ownership: 1 week to 1 month
Verified Owner
Tons of space, low transfer performance3/11/2009 7:19:40 AM

Cons: Like others have said, transfer rate is slow when uploading BUT speed is fine for streaming audio/video. I had a problem with some file transfers telling me the name had invalid characters or the drive does not support long file names, yet if I cancel and try again it works. This could be a windows issue and not with the device.

Overall Review: After some tinkering I was able to browse the shares from an Ubuntu rig as NFS when I setup the NFS properly on the device, would not connect to it as a samba share. I was able to browse the shares on a hackintosh but had to provide user credentials to connect. I have a large amount of files as a home user but have barely scratched the surface of this much capacity.

Pros: Small device that fits easily on a desk or shelf. Gig-E interface. RAID 5 and claims of low power utilization. 2.6GB of usable space. After using the device for nearly 3 months - those are about the only positive things to say about it.

Cons: Just loud enough to be annoying if on your desk, The device is incredibly slow - Gig-E connection slower than a typical 100 Mbit connection. Web interface and the software is slow and clunky and is difficult to navigate. You CAN NOT stream files from this device - prepare for pauses on any media file every 30 seconds. File transfers were lucky to hit 70 Mbits/sec - on a Gig-E connection. I wish someone had told me this in the reviews before I bought it, so I'm sharing here. As an afterthought, WD clearly bolted on 2 software packages to "serve" media files. The iTunes server - works well enough for one instance of iTunes at a time but will completely absorb all of the WD Sharespace resources so that you can do nothing else with the Sharespace device. The other package is Twonky. No instructions and an interface that looks like it was scraped from a 1999 website. It "serves" media files by downloading them to your PC and then activating your player of choice. Some server.....

Overall Review: It's clear this device was rushed to market with a low capacity embedded Linux solution. It clearly wasn't performance tested or utilized in the field. If you need a file archiver for small <100MByte files, this device would work. Unfortunately, trying to use this pitiful device as a file server is an incredibly expensive and frustrating mistake. Prepare for only one stream active at any time, pathetic transfer speeds and literally DAYS to backup your files. The USB ports are a joke - they only read FAT32 and their transfer speeds are notoriously bad as well. My recommended solution - a router with a network USB port emulator (ex. D-LINK DIR-655), a 4 port USB hub, and 4 external 1TB hard drives. You'll save hundreds of dollars and have approximately 10 times the performance. Or build your own server with RAID. For me, this thing turned into a $700 waste for its primary purpose - playing media files on our home network.

Cons: Very slow. There are a lot of discussion groups out there about the slowness of upload to this device. The problem stems from WD not putting a fast enough processor in this system. Yes it has a gigport nic in it, but you can only upload around 10MB/s so that doesn't matter. Trying to transfer over 1 TB will take you about 24 hours.

Overall Review: If you are strickly looking for a high storage capability and speed doesn't matter, then this device is for you. However, if you plan on doing a lot of transfers back and forth from this device, look elsewhere.

Pros: Easy to setup! Plugged it in, followed the instructions, created some users and shares and was good to go! Has run for months without requiring a reboot. Easy to access from Windows/Mac in a home office environment. Easy to manage - setting up shares was relatively easy for someone who knows the basics of user privileges. Seems to be power fault tolerant - have had a few power outages without loss of data. Relatively quiet, have it sitting on my desk and the only discernible noise is the drive accessing.

Cons: The included iTunes server does not always work (requires occasional reboot) and requires all music to be stored in a "Public" folder. The ability to change this location would be appreciated.

Overall Review: I went with this option because I didn't want to deal with the hassle of creating my own storage server. When we eventually use up the storage capacity of this unit, I think I will bite the bullet and build my own expandable storage server.