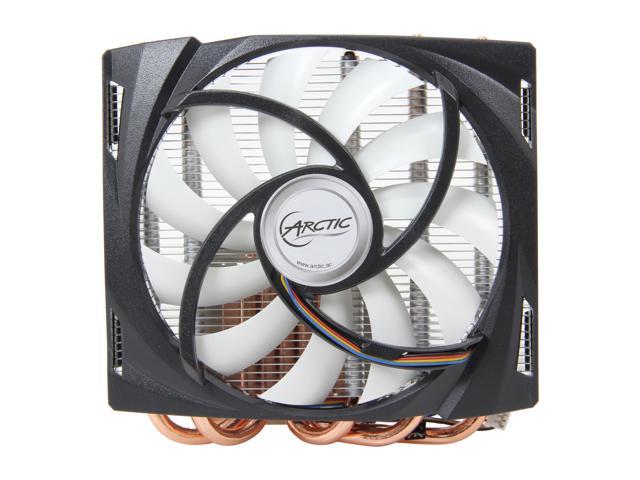 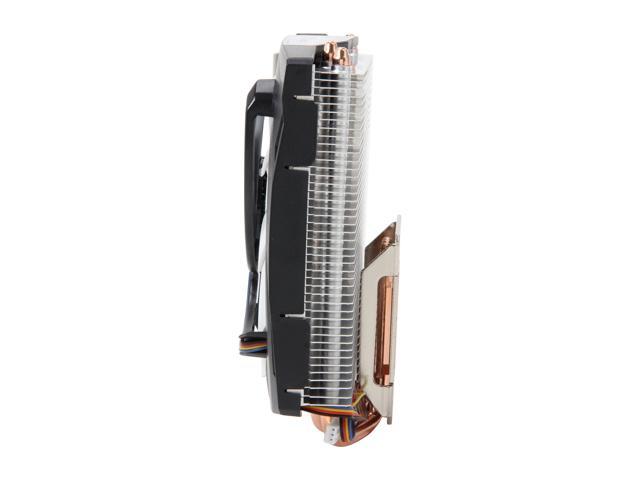 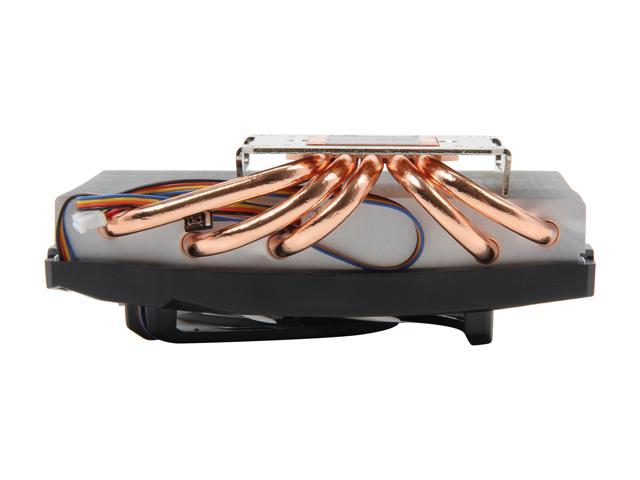 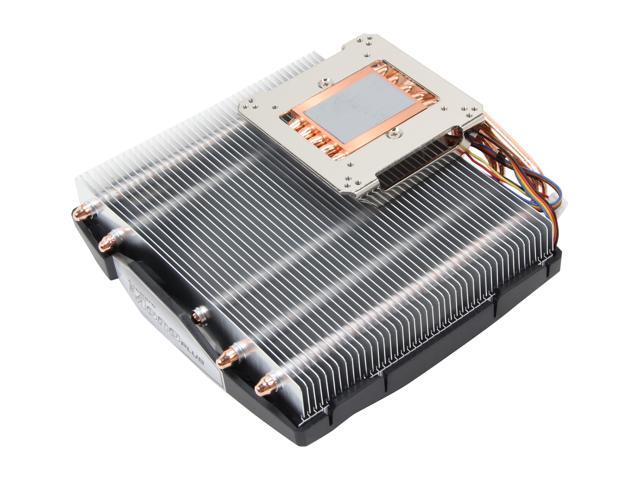 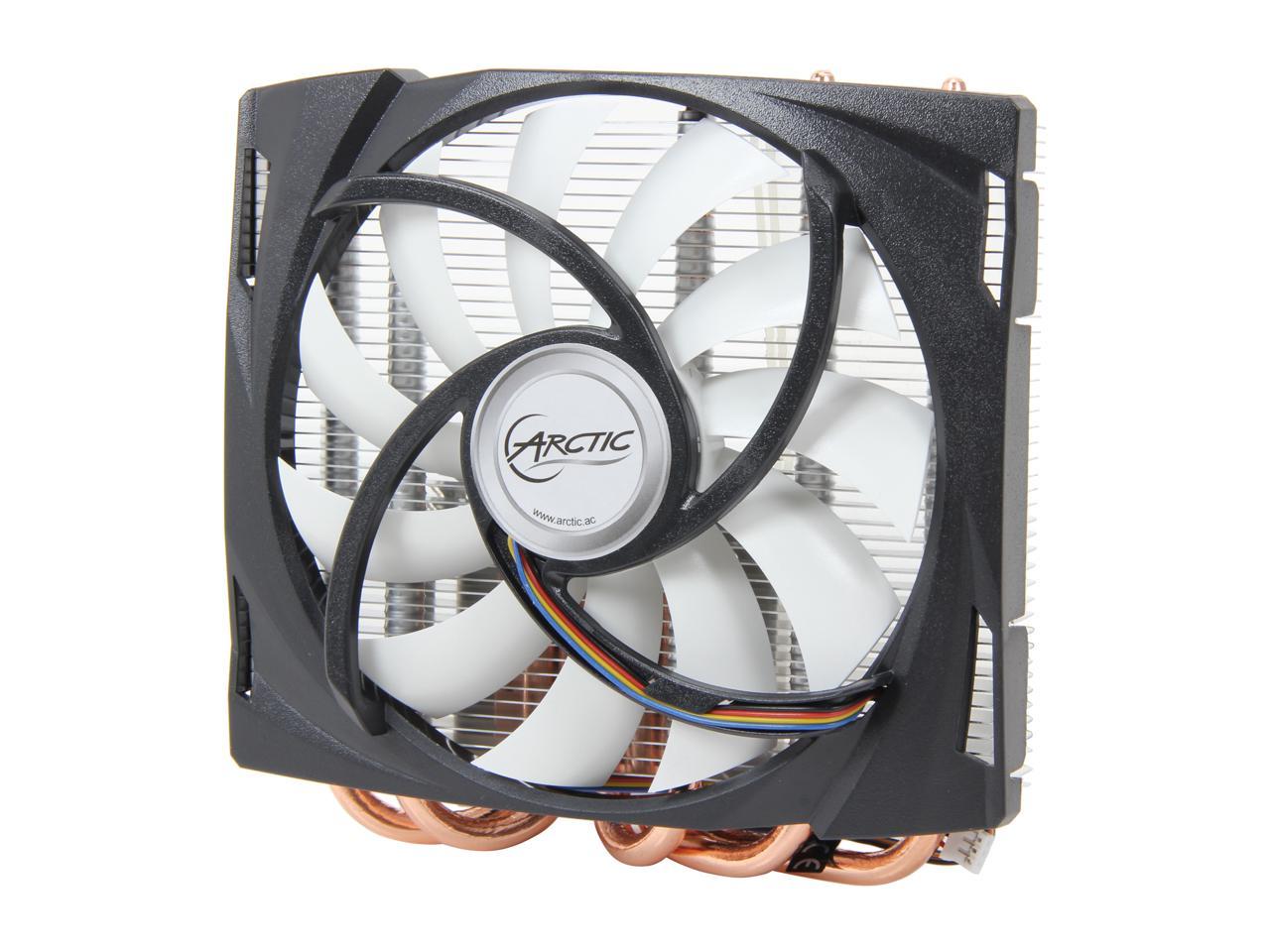 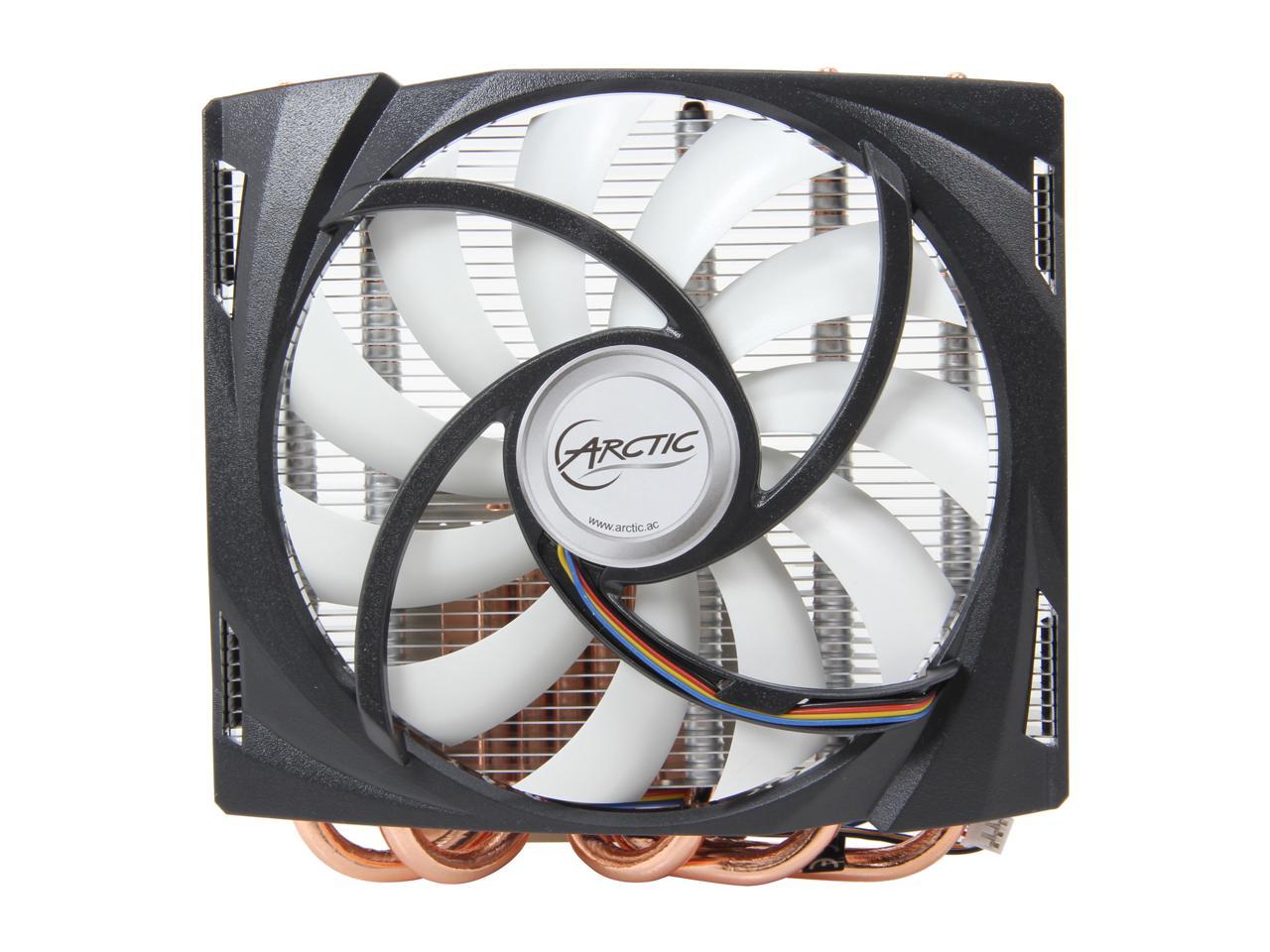 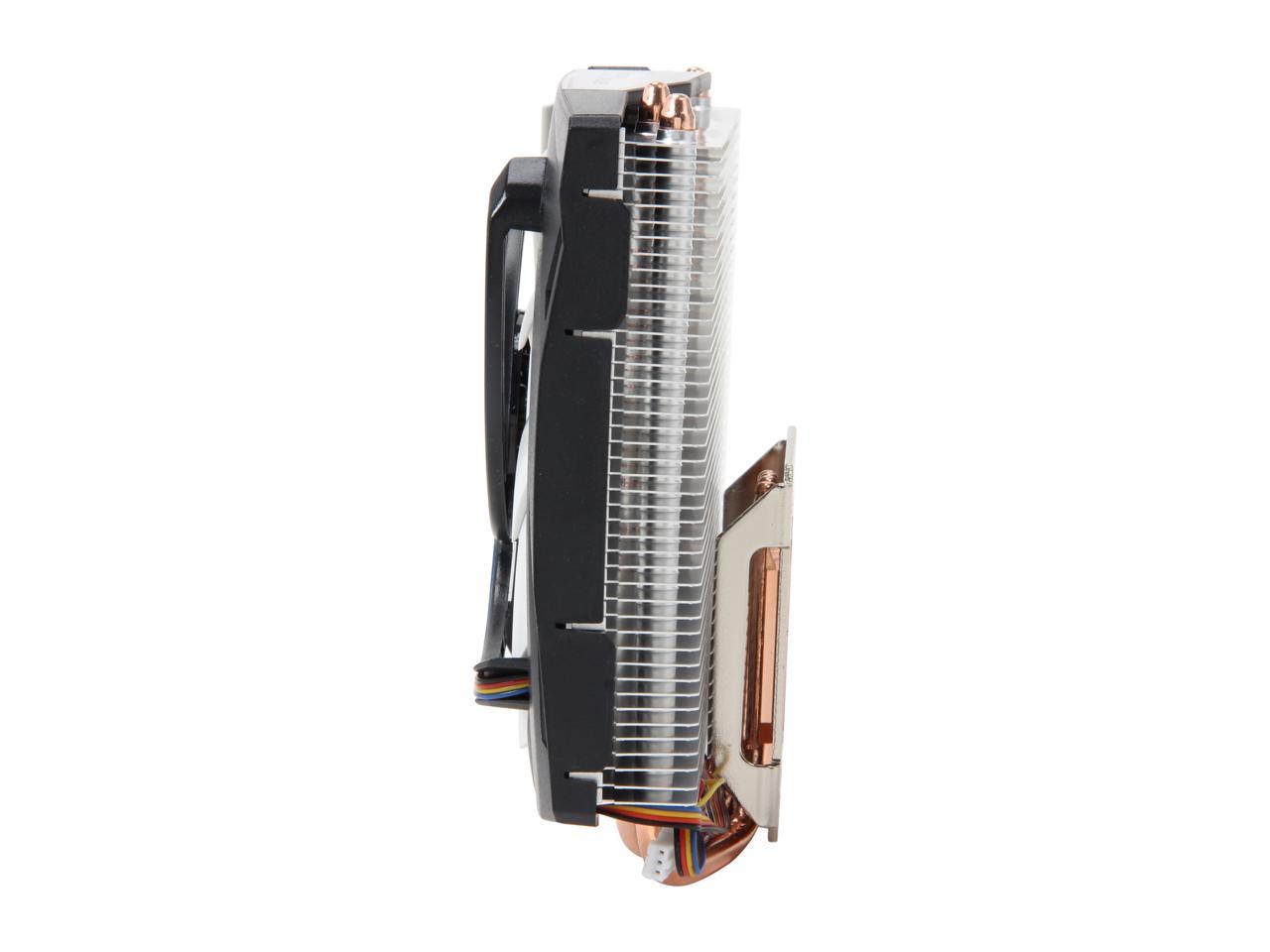 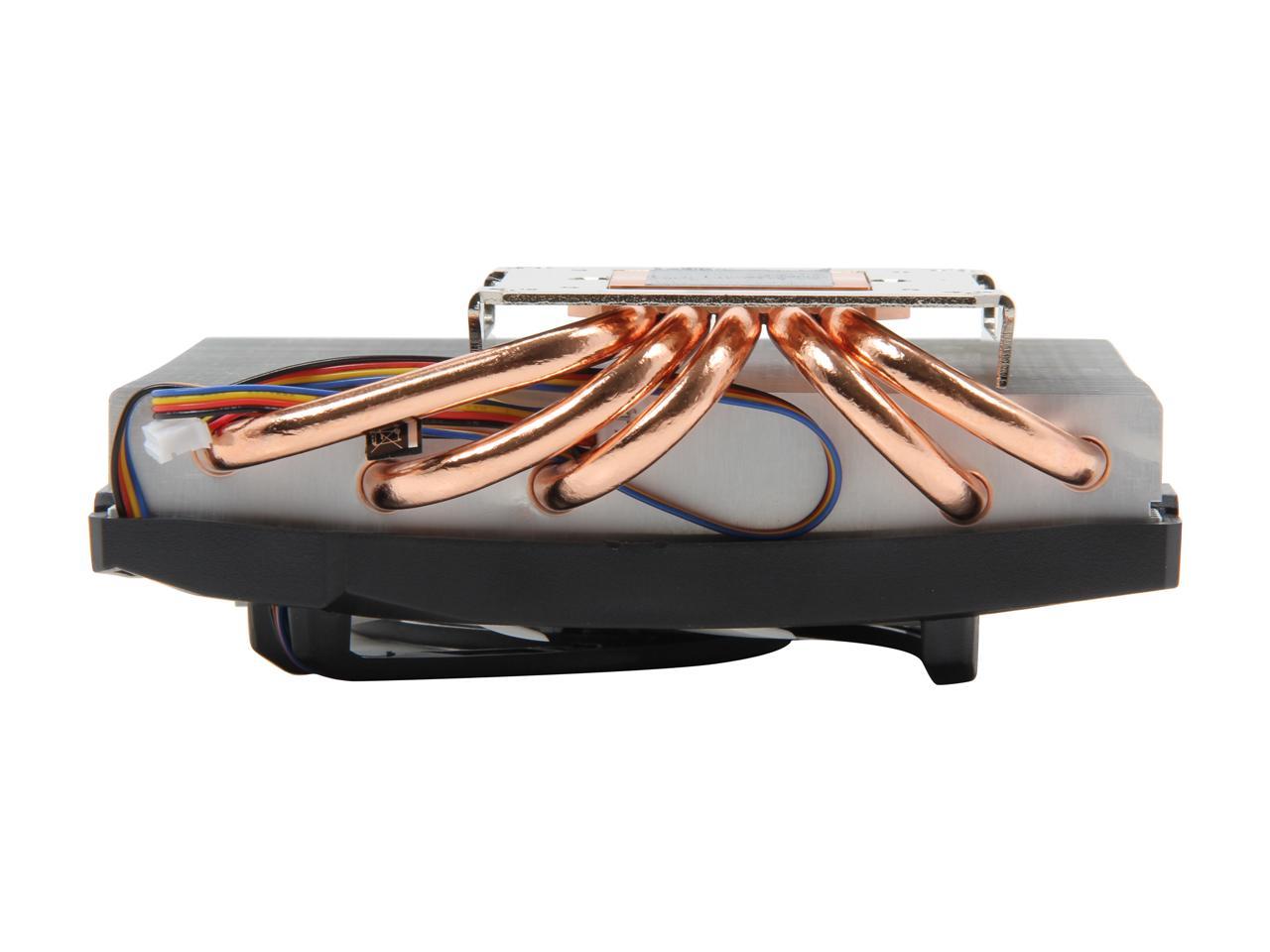 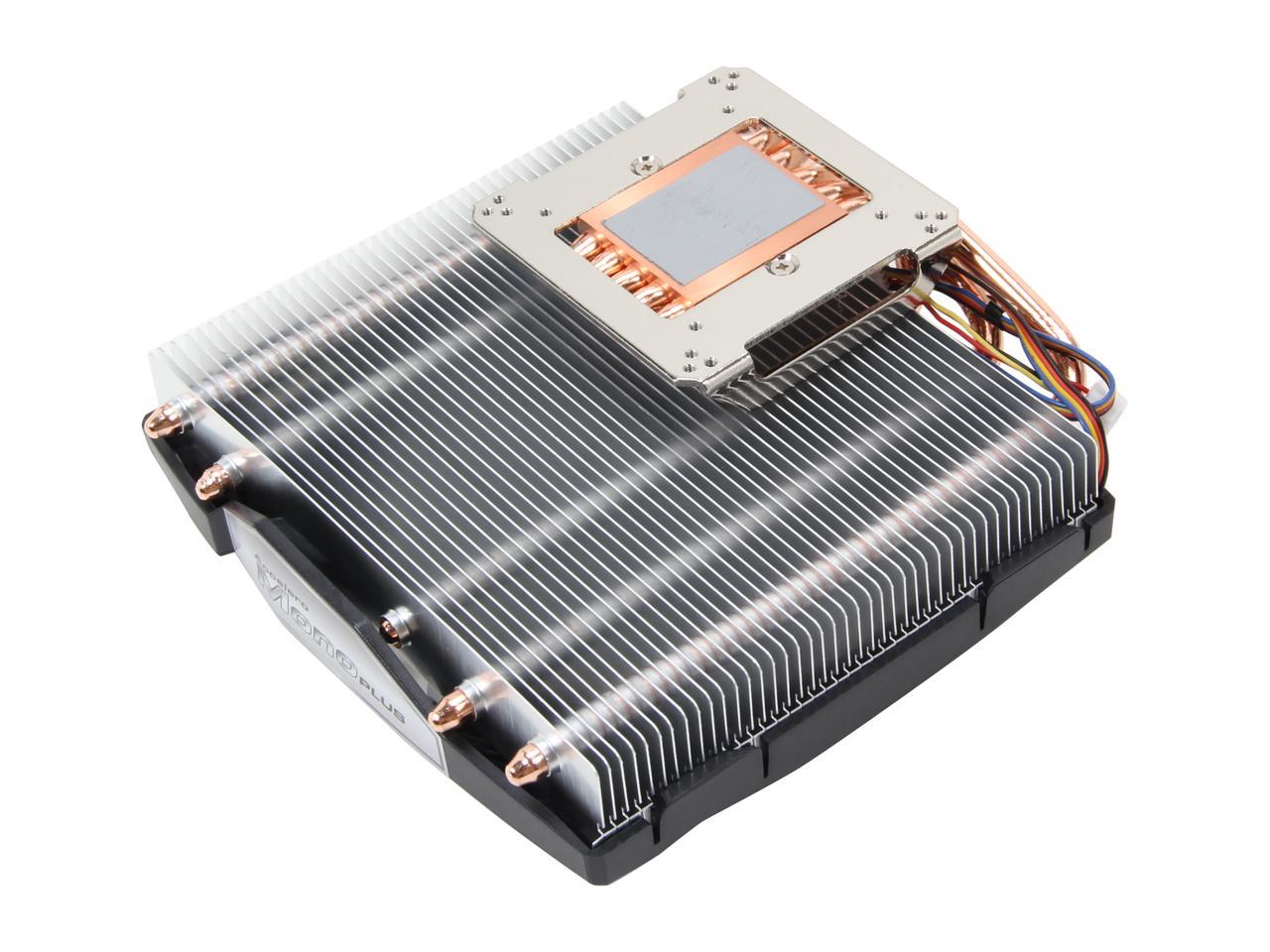 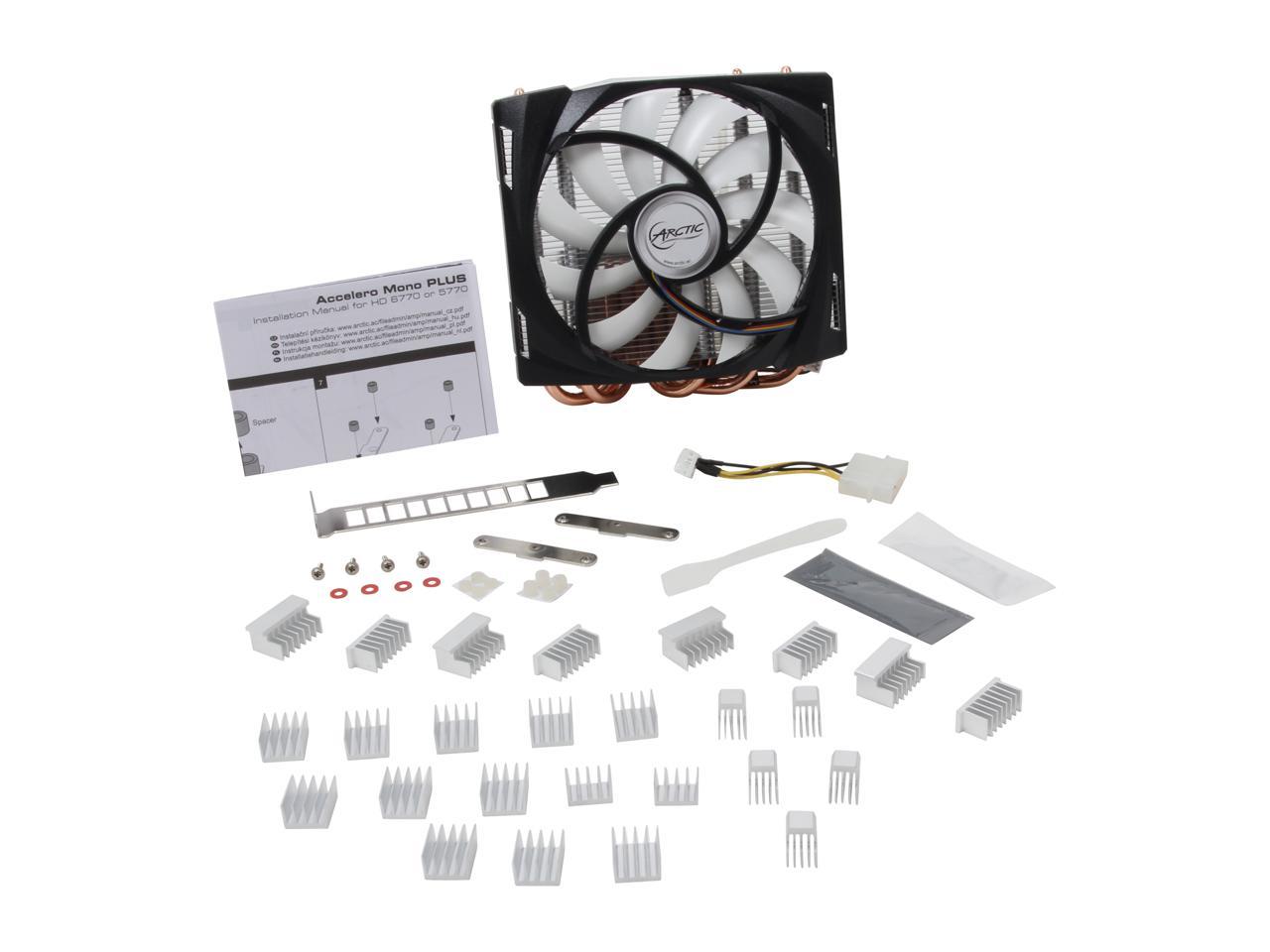 The Accelero Mono PLUS is equipped with a universal mounting mechanism, offering full support to a broad range of graphic cards. A 120 mm PWM fan and five heatpipes provide an ultimate cooling performance and a virtually silent environment at all times.

Learn more about the ARCTIC ACCEL-MONO-PLUS

Pros: I am pretty impressed with the way the Arctic Accelero Mono plus VGA cooler kept my video card cool. All things considered it really wasn't that expensive and if you can live with the cons this is an ideal option for someone who had a fan die or just wants to replace the poorly designed stock cooler. This cooler is so confusing to install because it has a very large array of cards that it can fit on. I personally followed a Youtube video of an installation that was in another language that I didn't understand because it was easier than following the directions. Here's the but...

Cons: Its ugly. Very big on the video card and its a bit heavy and makes my video card sag a bit in the slot. Make sure your case has enough room for this to fit. The directions were difficult. But its only because there are many parts that help with the install on a large variety of video cards. That being said.. None of that matters when you consider its performance.

Overall Review: I installed the cooler on a GTX760 4gb card. The stock cooler used heat sinks and 1 single cooler to bring the hot air out of the card. Never actually blew air onto the card. I will NEVER buy a card designed with such a bad cooler ever again. My video card looked HUGE until I got it taken apart. The fan took up half the size of the card. I'm actually a bit embarrassed I bought the card in the first place. Stock cooler sat idle at 50C and under load would reach temps in the 70's! This cooler brought my temp down to 30 at idle and 45C when playing arma2. stress temps never go over 54. Its also allowed me to overclock the GTX760 and get an extra 100MHZ off the GPU. Im happy I bought it to extend the life of my card instead of buying a new one. I will hand this card down to the kids in a few months.

Cons: It's surprisingly big, definitely not for cramped cases. On my 7850, it extends about an inch in height past the top of the video card. The other problem is with the fan. It's big and cools well, but the 3 ping design won't allow it to be used with the controller on the video card itself. Possible fan longevity issues

Overall Review: I purchased this to replace the stock cooler on my AMD 7850. The design of the heatsink assembly is very good, so is the workmanship and the extras in the packaging. The main problem I had with this cooler was with the fan. It comes with an adapter to allow operation at 12V and 7V. Even at 7V however, I found the noise level to be a bit high. Just enough to be heard over the rest of my computer. Previous products from this company showed problems with fan longevity. Out of 4 coolers I have purchased, 2 units had to have their fans replaced at cost due to their controller chips burning out.

Pros: Awesome cooling. Brought temps from 83C under load down to 50 under load.

Pros: -Keeps my RX 480 overclocked at a really steady temp. -Set my target temp at 70C and it's very quiet there. -Includes headsinks for your vram and VRMs

Cons: -Very big on the card. -It pokes out so far that it touches the side panel fan. -It's a lot heavier so it weighs down the card and flexes it.

Overall Review: This is a must have if you have an AMD card like the RX 480 (mostly reference owners) and are on a budget as everyone knows by now AMD's thinking process on cooling the RX 480 was a complete afterthought. I currently don't have any heatsinks on the VRAMs but I do on the VRMs. For the price you pay, it works insanely well and depending on what target temp you have set, it's very quiet. Spins at 1500RPMs when set at 70C. Any lower and I'm sure the fan will start to spin up faster. Definitely worth the investment. Edit: This thing has permanently bent my card after just a months use. I set just the bare card on the table and I can push one side and it'll lift off the other. When putting back on the reference cooler, I had to bend it back a little in order to line up the screw holes (I have the XFX Black Edition with the back plate and it was not aligned with the plate). I have since found out that applying new thermal paste to the RX 480 with reference coolers cools better than before. Of course, it doesn't cool better than this Accelero Mono Plus but it cools it enough to where it won't thermal throttle. This would be great if you have a case where it positions your card sideways instead of the normal ATX way.

Pros: This cooler took my temps down about 30 degrees on my card. It comes with plenty of heatsinks which I used to also cover the vram and ram on the card. I cleaned off the thermal paste and used my own better quality paste and thermal adhesive for the heatsinks. Well worth the money and I see the price has dropped a lot on it now. I would buy this cooler again if I needed to.

Cons: The fan on it was dead when I got it out of the box and installed it. I didn't bother sending it back and waiting for the long drawn out process of an RMA. I replaced it with a blue LED fan which actually looks better in my case with the blue lighted theme. The cooler is really big so it helps to have plenty of room for it. It sticks out about 2 inches past my card.

Pros: - Amazing cooling performance: With this cooler, Fire Strike never exceeds 58 deg. C (lowered 28 deg. C from a reference cooler at RX 480). I was really surprised. - Virtually Silent: This is the only product that has 120mm fan among Accelero products. It has the same noise level with a 120mm desktop case fan or CPU fan. It's far more silent than usual 92mm GPU fans that generate high pitch noise. - Blazing fast delivery: The third party dealer "Hot Deals 4 Less" delivered it from California to New York in 3 days at weekend.

Cons: - The thermal glue (tube type) for heat sinks has enough adhesion force only on the wide surface of VRAM chips. Heat sinks attached on small chips always falls off. If you worry about any short circuit by fallen heat sinks, just skip installing them.

Overall Review: - I bought a second-hand ex-mining RX 480 a few months ago just before AMD game bundle started (sigh). The used reference card had a serious thermal problem that cannot keep even 10 minutes of GPU load. The system showed grey jiggling screen and stopped response. When I disassembled it and pasted Arctic Silver 5 on the GPU chip, the card managed to hold little more. Finally, I had to reduce VRAM clock speed to avoid freezing. - After installing this incredible cooler, every limiting tweak became unnecessary. Now my Tuned by XFX RX 480 works flawlessly with -50mV under-volting, +50% power limit and 1350 MHz GPU clock. I'm 100% satisfied with this product. Good job, ARCTIC.

Pros: Using a micro case and an r9 370, the max temp has went from 71 to 56... a 15 degree drop. The air being moved out by the exhaust fan is noticablely cooler and I have also noticed a 4.5 degree drop in the cpu temperature because of the reduced temperature in the case itself. Easy to install camt say enough about how quiet this is compared to the stock cooler.

Cons: They don't team up and sell Arctic cards...

Pros: See the "other comments" below. The installation took about two hours total time. Use a CLEAN pencil eraser to clean the mosfets and memory chips, and blow the eraser residue away with compressed air, before installing heatsinks included in the package. Recommend using Arctic Clean for removing the thermal compound residue off the graphics chip, after removing the stock cooling fan and heatsink. The cooler itself has a copper bottom, with the GPU thermal grease already applied to the bottom. BOTTOM LINE: Best value for the buck on this outstanding aftermarket cooler! It caused a significant drop in GPU temps under full load!

Cons: The heatsink adhesive (only one tube (pre-mixed) instead of two separate tubes, as in the pictures above) took a little longer than 60 minutes to cure, but the sinks were firmly attached in about two hours. So, Arctic did take previous reviewers' negative comments about the old thermal adhesive into account, and improved the heatsink adhesive compound. Just be patient and let the stuff dry. All the screws, spacers, etc., are packed into the cooler, between the copper plate and the heatsink fins. Be careful when removing the bags.

Overall Review: This cooler replaced the stock cooler on an MSI R7 360 graphics card, which was just an aluminum block with a cheap, attached, loud, whining fan even at 70% speed. Prior to installing the Arctic cooler on the R7 360, the graphics processor was running temps around 64 - 70 degrees Celsius while running folding@home, which is way too high. (Hey MSI, your stock cooler is highly inadequate for this graphics card, unless you never want to run it under full load.) After installing the Arctic Mono Plus cooler and the supplied heatsinks, the temps dropped to 44 - 50 degrees Celsius under full load, with the fan set at 75% speed -- quite a drop, and less wasted energy! The 120 mm fan is very quiet, as well. Highly recommend this product!