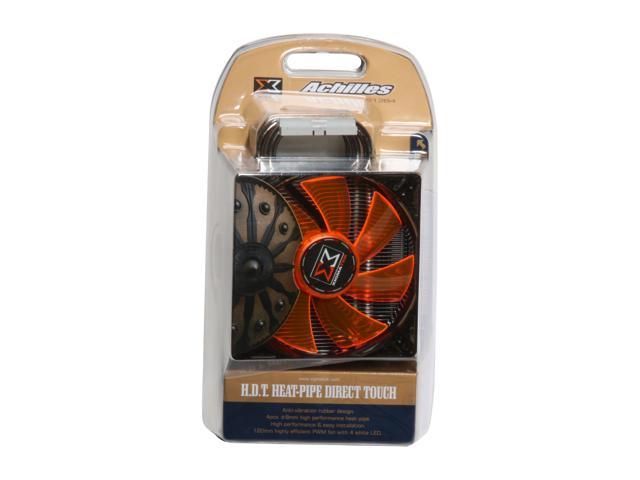 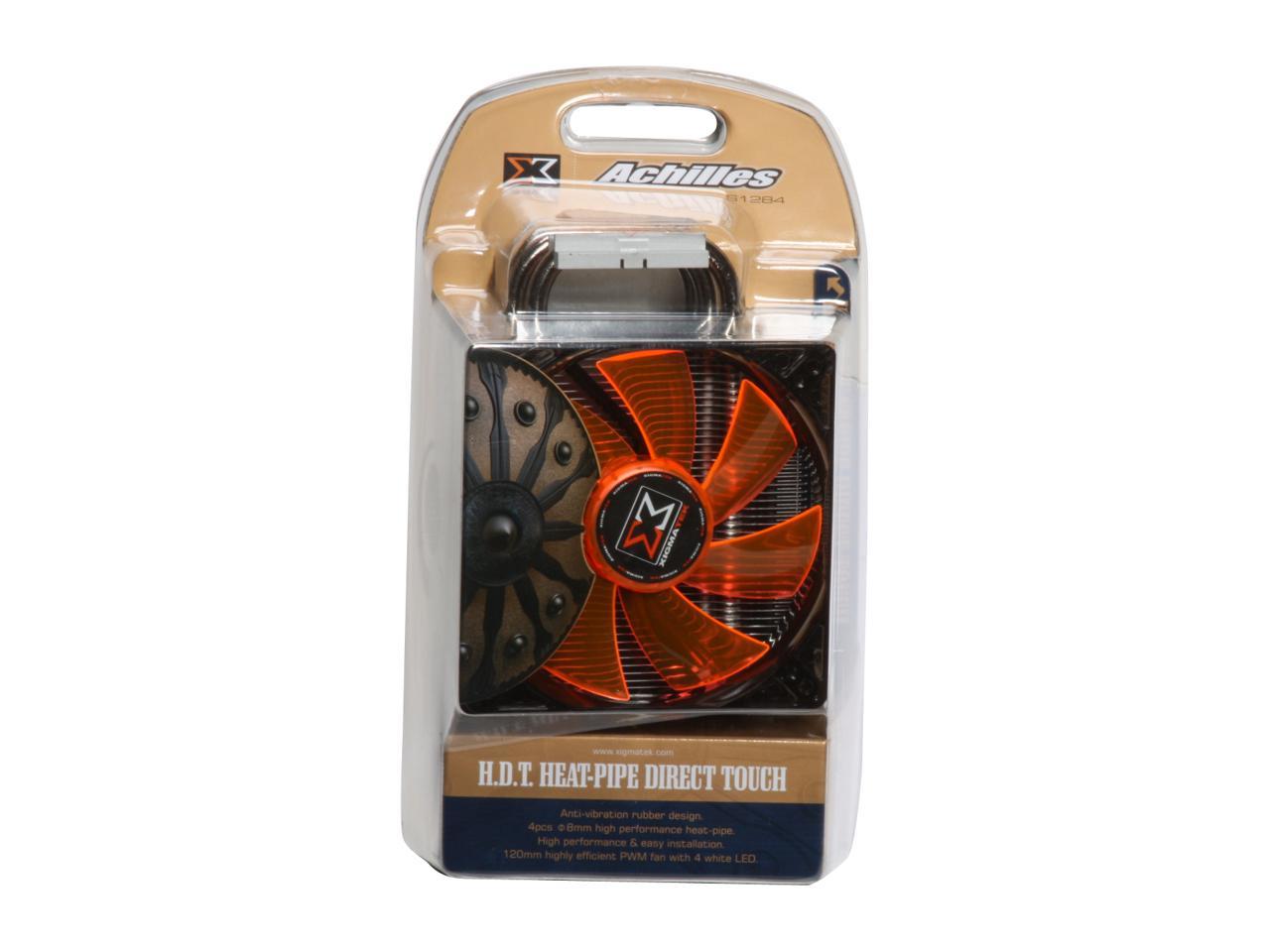 (5) Write a Review
OUT OF STOCK.
Overview
Specs
Reviews
Xigmatek goes beyond the conventional in their innovative, efficient thermal solutions. Instead of a copper base or bulky heat spreader, the Achilles S1284 is part of their HDT range of coolers. The Heatpipe Direct Touch system is a cutting edge solution for efficient thermal transference directly from the CPU – heatpipes in direct contact with the CPU instead of being buried within a base. These 4 large U-shaped 8mm pure copper sealed tubes contain fluid which moves the heat upward into the array of large-surface area aluminum convection fins.
The fins are cooled by over 61 CFM of cooling air from the 120mm fan spinning on rifle bearings. Even at its maximum 1500 RPM speed, the fan only generates 20.6 dBA of noise. This level can be lowered automatically, based on thermal demand utilizing the PWM functionality. Controlled by the BIOS, the fan's speed is adjusted automatically as the system detects changes in temperature.
The Achiles sits upon vibration-eliminating rubber mounts which isolate any fan vibrations from the motherboard – ensuring quiet operation. A tool-less clip holds the cooler safely in place on any AMD Socket AM2, 754, 939 or 940 processor as well as all Intel Socket 775 CPUs.

Pros: It is a good heatsink, not the best, but good.

Cons: Supposedly an improvement over the S1283, it actually performs worse due to the design of the heatpipes. They're staggered and lose some contact surface area with the CPU. The result is that the S1283 is about 2-3C lower temp than its big brother. There's rumors that they will ship a revised edition which is supposed to fix this issue. If that's the case, Newegg shouldn't be selling these beta products. Also, Xigmatek should include the bolt through kit with their heatsinks, not make it a ten dollar option.

Overall Review: Good, not great. Push-pin design. You should wait for the revised edition and see a review on how that one fares.

Pros: This thing does cool my Quad down a lot cooler than my Zalman 9700, and for that matter my other heat sinks i have used. I did lap my S1284 as soon as i got it, also remember to clean the bottom of your heat sinks before you put it on for the first time, it will help drop temps as well. i did buy the bolt through kit as it helps drop temps as well by allowing for a tighter fit onto the cpu. I used 1500 Grit sandpaper, but if you can get a hold of better higher grit sandpaper then use it, the extra heatpipe does help with dispersing heat, and the Quad series is a known heat maker.

Cons: This is huge, and i will not lie, it barely fits into my CM690 case, however using the bolt through kit it is sturdy as hell, and im confident that it will stand true. It dishes out alot of heat with my Scythe Slipstream fan running on it, but that is a good thing, the more heat coming out the less that is on the chip.

Pros: Noobies need not apply here, you need alot of thermal compound with this baby! double install - spread compound even apply then remove and add more as needed. make sure you get TC in the gaps and cracks and enough for a full interface - it requires more then normal. i use atric s!

Cons: well i did not find any - this out performed a few other big names like TR 90 and ZT 120 when install right

Overall Review: there is a rumor this baby works ok with 65nm not 45nm - that may be the difference. my testing was with a q6600 65nm. xbt shows says there is an issue with direct contact and 45nm due to gaps in the steal package

Pros: Heard a lot of good things about the company and heat-sink. Just did not deliver

Overall Review: i would highly recommend another heat-sink!!

Pros: Pretty decent heat sink. Pretty easy to install with arctic silver 5 in my Silverstone TJ09 case. Currently OC'ed to 3.5 ghz with my e8500 but I'm going to continue to push it. Idles around 45 degrees Celsius and 100% cpu load for 30 minutes didn't go past 66 degrees Celsius. Although big, it's not that heavy. Stock heat sink would idle around 50-55 and load would be around 75-80, at stock speed too. So a big improvement.

Cons: The instructions suck. At first, I tried to screw on the connectors backwards like a noob and didn't realize it until I couldn't get it on. This thing is also huge so it may not fit in all cases.

Overall Review: Although I never had the S1283, I doubt this is much of an improvement, if at all over its brother. Some say it's worse, some say it's better. It just depends on your setup.