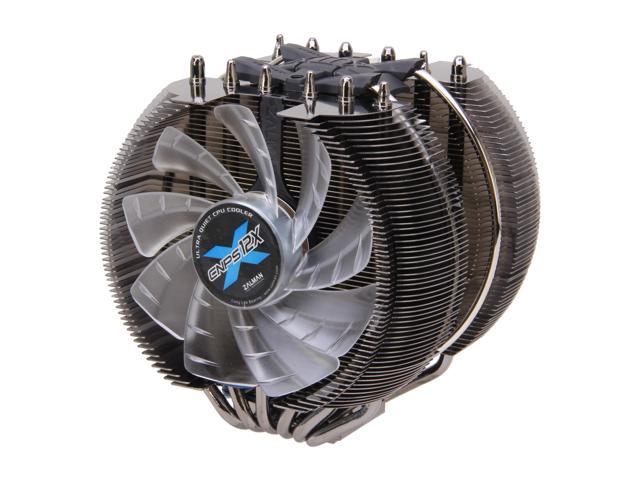 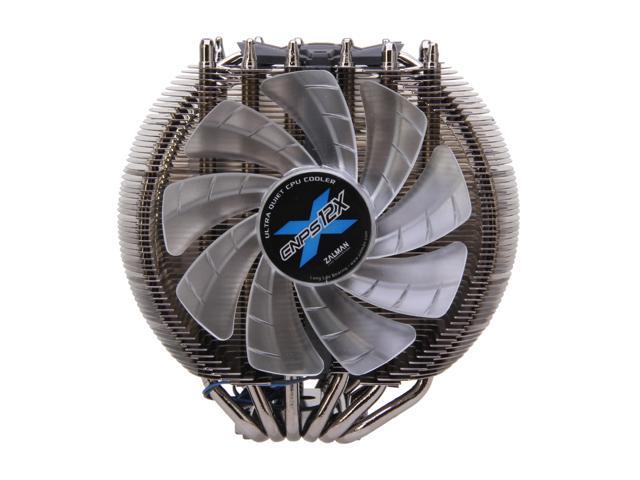 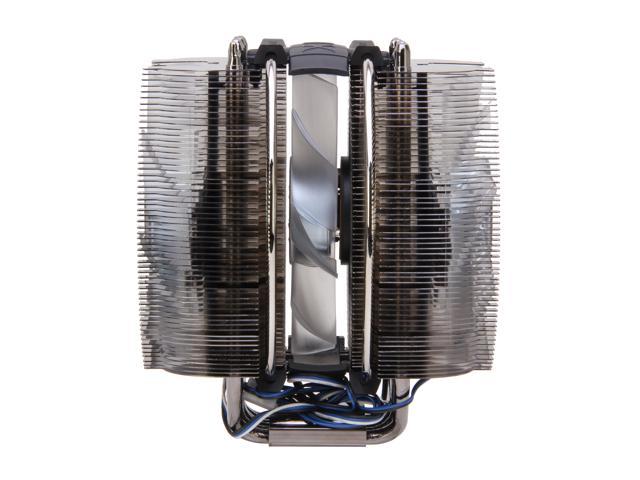 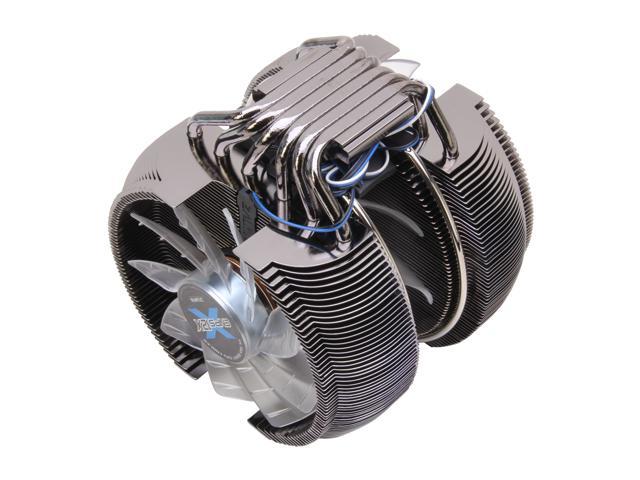 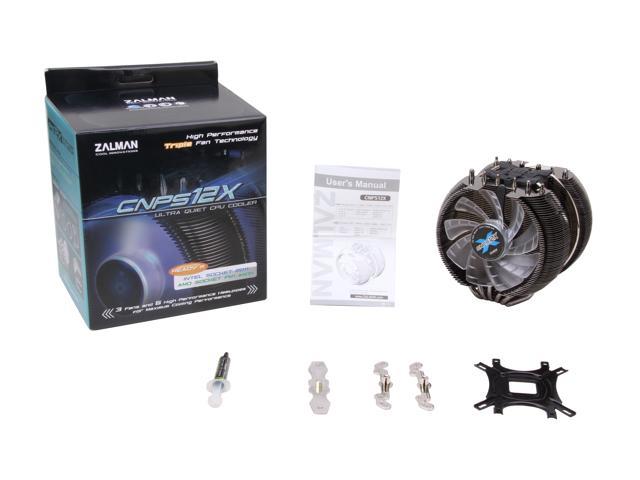 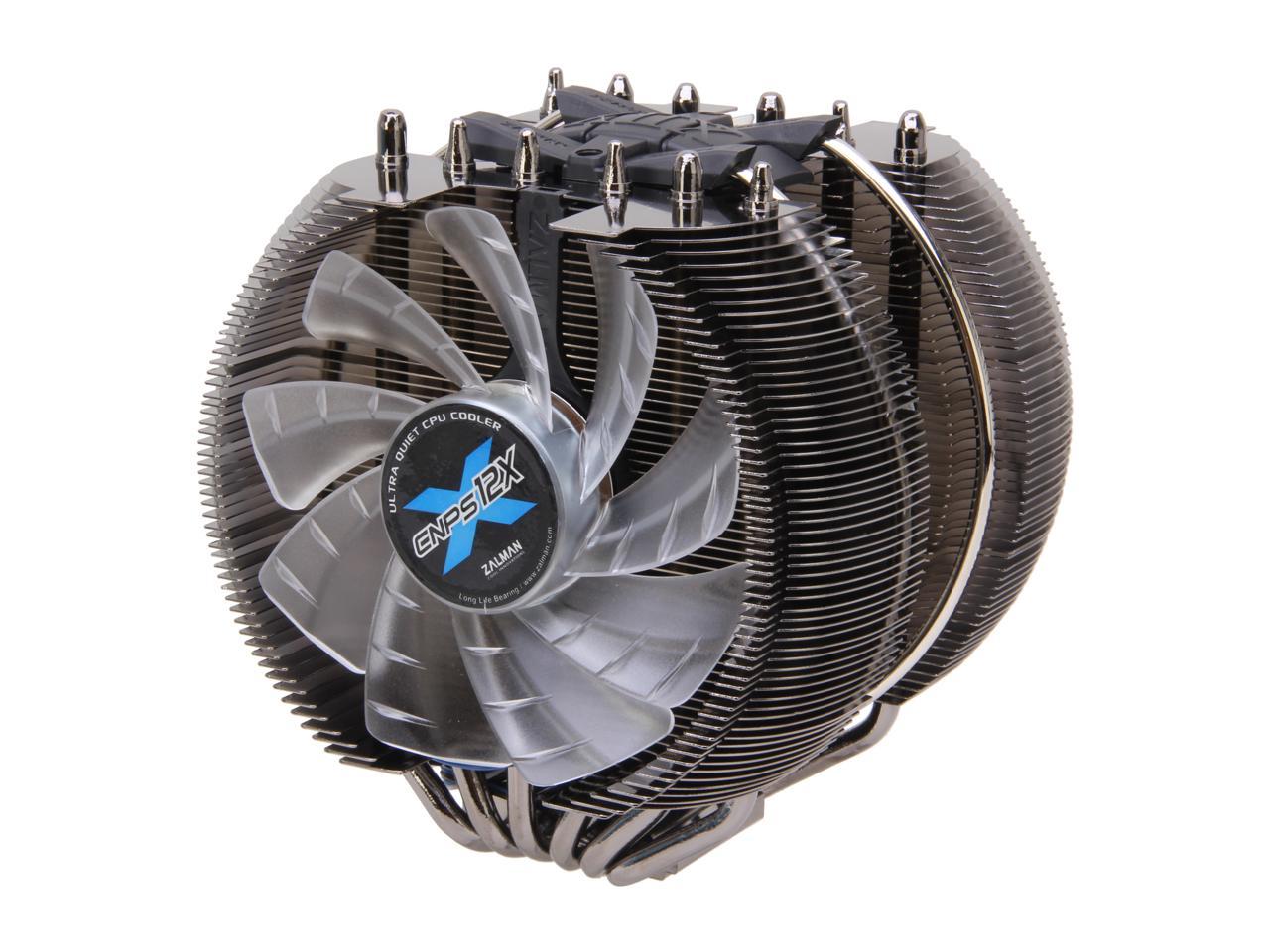 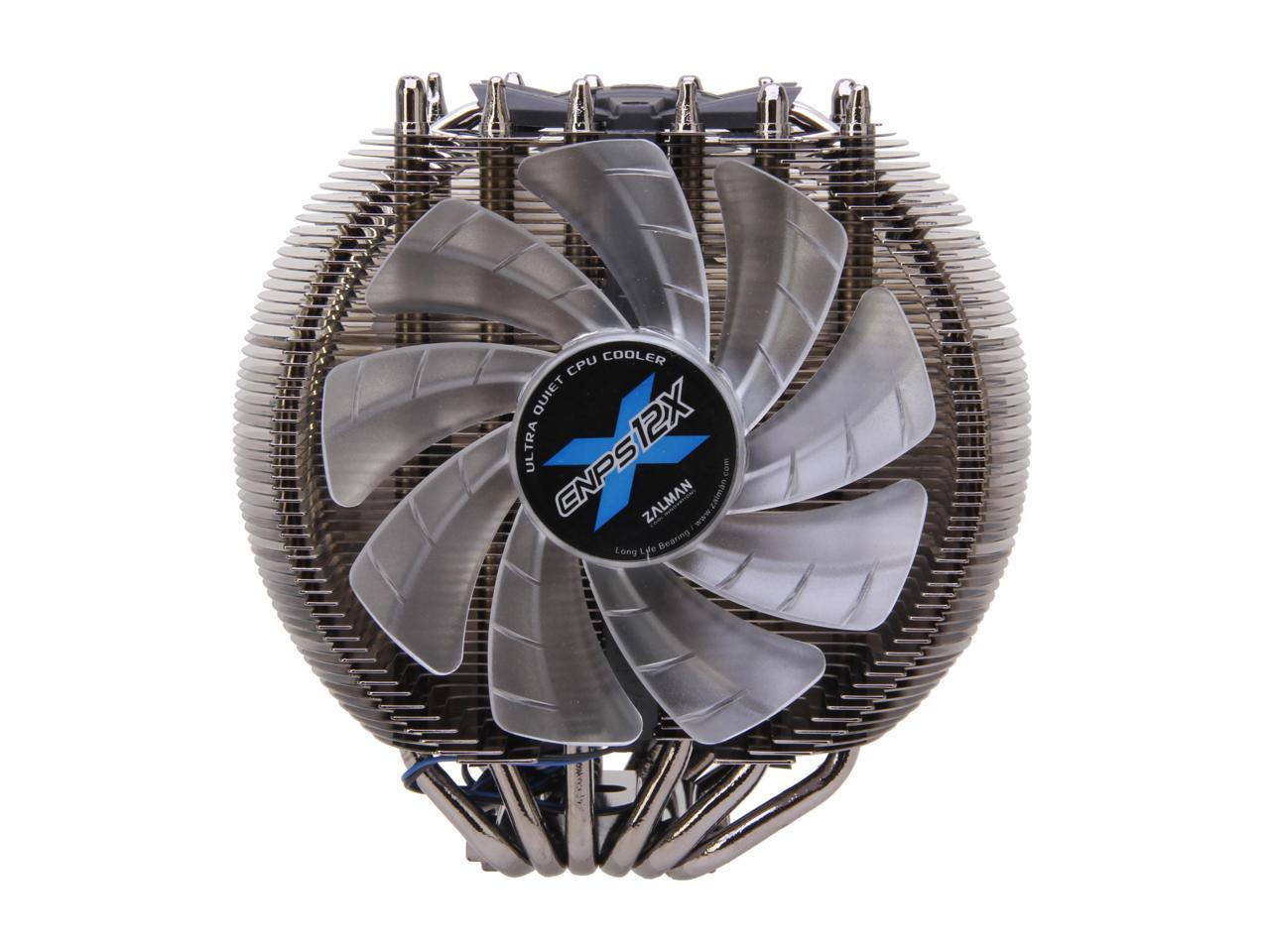 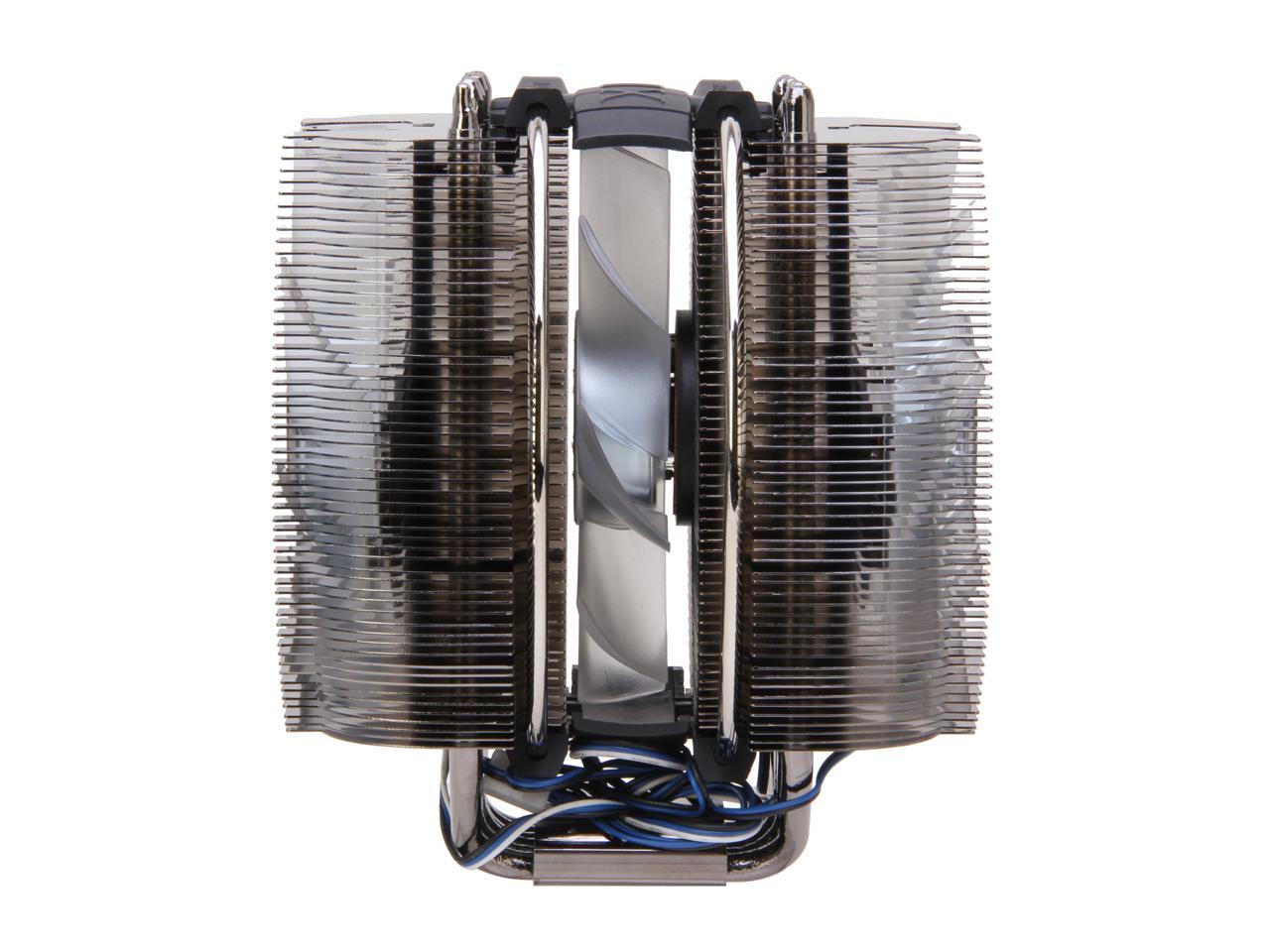 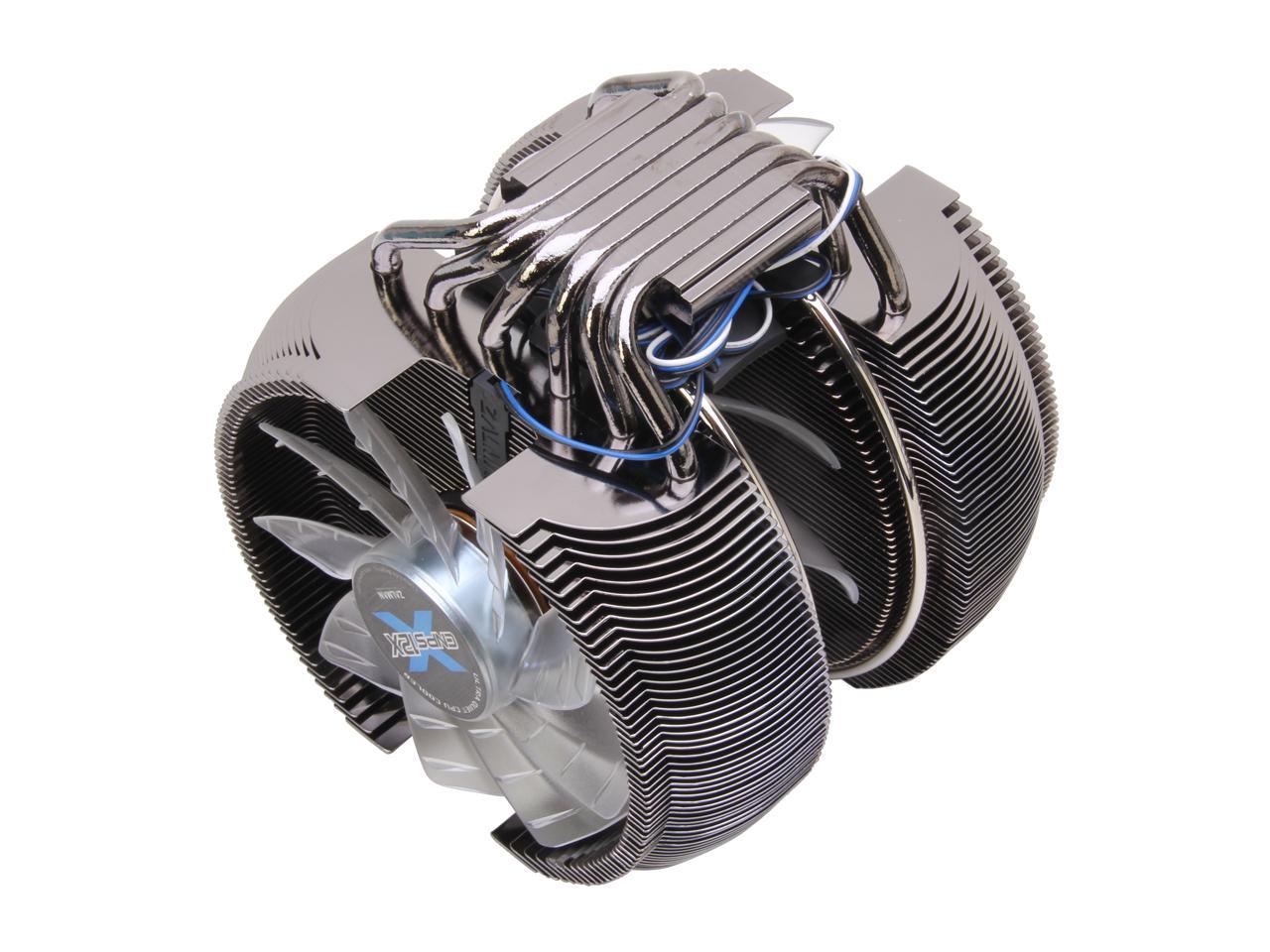 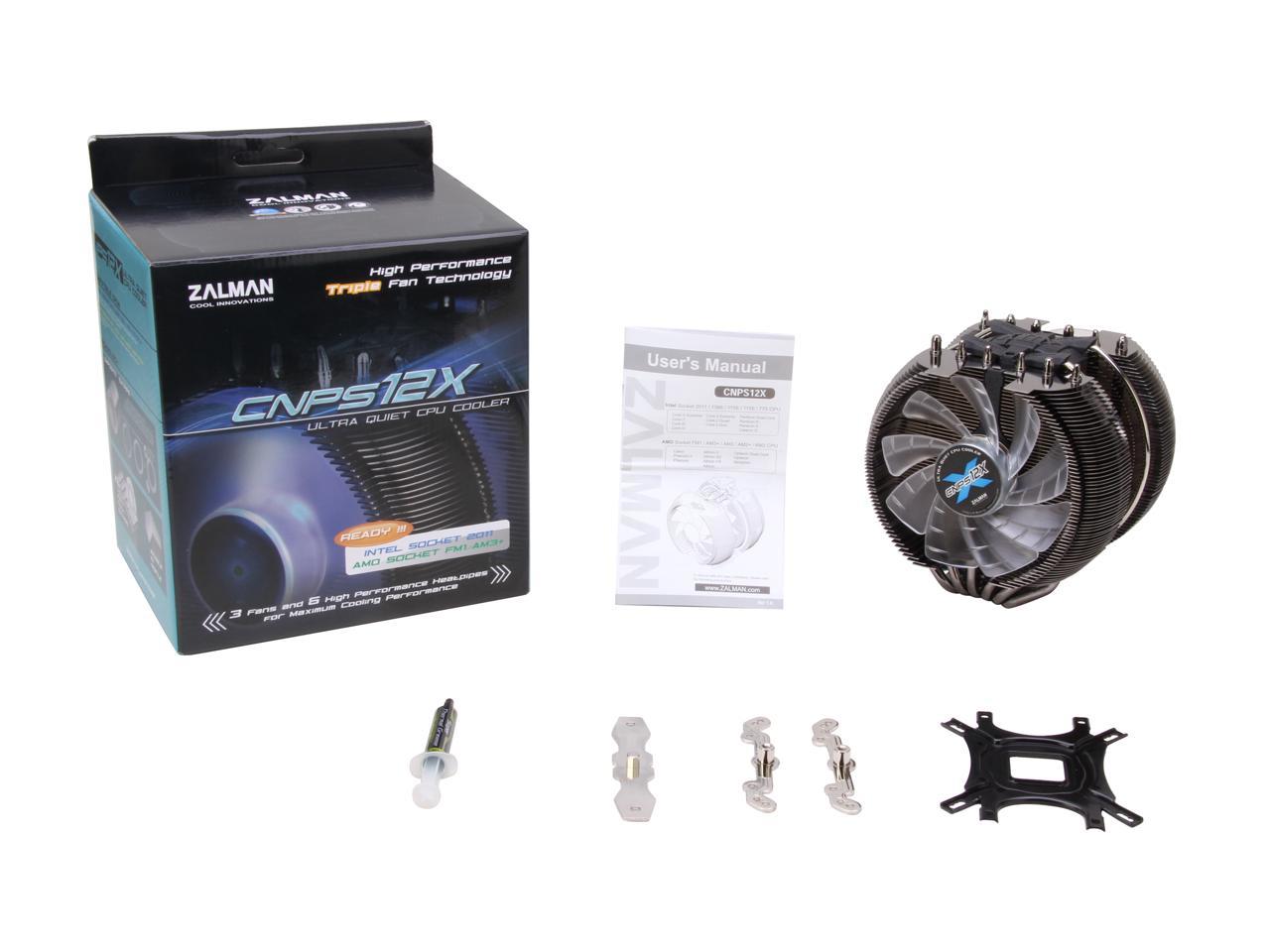 (103) Write a Review
OUT OF STOCK.
Overview
Specs
Reviews *"Switching noise" is the high frequency harmonic noise that can result from voltage regulation. As applying W-DTH - Whole-Direct Touch Heatpipes - technology, heatpipes in the Base Cover touch the CPU directly and transfer the CPU's heat directly to heatpipes, thereby minimizing heat resistance and maximizing cooling performance in a short time.

By utilizing Composite Heatpipes, the heat transfer capacity is enhanced by 50% compared to the ordinary sintered-type heatpipes.

The entire heatsink of CNPS12X is plated with "Black-Pearl" Nickel for a long-term corrosion resistance, while the deep "Black-Pearl" tone along with the high intensity Blue LEDs reinforce its powerful aesthetics.

Moreover, thanks to highly optimized heatsink design, CNPS12X is able to be compatible with a Mid -Tower Case with its width is 180mm or wider.

The included all new high performance thermal grease ZM-STG2 maximizes heat transfer from the CPU to the base of CNPS12X for intensified cooling performance.

The cooler's height is 154mm, and it can be installed in midsized cases which measure 180mm in width. Pros: -Provides Excellent CPU Cooling. The only non-TEC or watercooling solution I've seen first hand that compares in cooling ability is the Noctua NH-D14. Running an AMD FX-8120 OC @ 4Ghz, idle temps around 35C with minimal fan speed. While playing BF3 at max settings while simultaneously encoding a video project using Adobe Premiere Pro measured load temps at 45. -It's a nice looking cooler. Better looking than the dull box fan style coolers out there like the Noctua designs. -Extremely Quiet. When my CPU is idle the third fan shuts off and the other two spin just fast enough to keep the temps in the 30's. I've compared the noise of this with a friends Noctua NH-D14 at 100% the Zalman is roughly 2dB quieter, although both are quieter than my other case fans.

Cons: -Very poorly designed in regard to how it fits with surrounding hardware. I've read multiple reviews where RAM slots and/or a top PCI-E slot was blocked by this. In my system the top PCI-E is covered in addition to 3 RAM slots. I specifically purchased slightly lower profile mushkin modules in the hopes that this would clear them but was still unsuccessful. Ended up replacing the RAMsink with aftermarket cooling to make room. The annoying part is the fact that my case and motherboard has plenty of clearance above and to the rear of the cooler. If only it leaned in the other direction none of this would be a problem. I have to assume the number of systems Zalman tested this cooler with are minimal. -The price of this cooler is also steep. The Noctua NH-D14 is considerably cheaper and provides equivalent cooling with less headache. -Installation is slightly more complicated than other high end cooling solutions.

Overall Review: My first Zalman cooler was a CNPS7700CU on a socket 939 platform. Ever since then I've been a loyal user of their products. When I upgraded to a dual core on that same platform I upgraded to the CNPS9500 and then to the CNPS9700 when I upgraded to an AM2+ quad core system which I used for over 3 years. I have also owned both the 600-HP and 1000-HP power supplies, the latter I've been using for over 3 years. I even had a Zalman aftermarket graphics cooling solution back with a Geforce 7 series card. My point is that I've never been disappointed with a Zalman product until this purchase. Yes, it's an excellent cooler but there is little to no regard to how it will fit in most systems. I'm not even an engineer and I instantly saw ways that this could have been avoided but somehow Zalman did not. Unless you KNOW that it will fit in your system I recommend you avoid this cooler.

2 out of 4 people found this review helpful. Did you?
Phillip W.
Ownership: 1 month to 1 year

Cons: Wont fit on a z97 chipset board made by gigabyte namely the GA-Z97X-Gaming G1, ALSO the z97 SOC FORCE. NO SUPPORT from Zalman

Overall Review: I own both the above motherboards and the way the northbridge heatsinks are on both boards this wont fit you can not in any way fit the heatsink on because you cant get to the top screws to hold them down, also the bracket that you have to screw down to hold it is to long and hits the heatsinks. So you would have to grind bracket down the find some magic way of getting to the screw on that side to tighten them. So if you own either of those boards don't buy this because it wont fit. I bought a 9500led to fit but the bracket inside was wrong for the 1150 socket. I have emailed ( yes to the right address ) and filled out their web form twice in the last 3 weeks with no reply from zalmann to get the right bracket. So lets see this one wont fit and other has wrong bracket with NO SUPPORT from zalman at all. I cant call them their hours are like mine and since they don't answer emails you might as well go with a different company. Now they can leave a reply here but it doesn't help because they don't answer emails what a lame company.

1 out of 3 people found this review helpful. Did you?
Manufacturer Response:
Dear valued customer, We sincerely apologize for the issue. Please contact our customer service e-mail support.usa@zalmanusa.com or via toll free number 1-888-925-6266 for further assistance. Thank you. Best regards, Zalman USA Customer Service
Nicholas B.
Ownership: 1 day to 1 week
Verified Owner
1/24/2013 10:02:54 AM

Pros: Having three fans is nice, keeps my computer at 25C Idle. Oh, and it fits because I measured the dimensions about 2-3 times before buying it. One of the only coolers that came with an actual diagram showing the dimensions. Came with 40 dollar rebate at the time, along with 15 bucks off thanks to shell shocker, so the price was very good after those (45 bucks!). Fits perfectly in my HAF 922 Mid-tower case. Nice blue light, super quiet, even with three fans running.

Cons: Came with the middle fan stuck on the heatsink. After further investigating, just took a screwdriver and pushed the plastic part that runs down the middle of the heatsink, and it went back in. Worried about taking it back, but glad I fixed it myself. Not worth -1 egg.

Overall Review: Please measure a couple times before you decide on buying it. Make sure it will not interfere with the ram (I'd say no taller than 37mm on the stick, even though it says 40, that 40 is from mobo to top of stick). It WILL ALMOST ALWAYS cover 1-3 ram slots, so make sure you install ram before installing the cooler. Once again, MEASURE BEFORE YOU BUY! I've seen too many one egg reviews because they neglect to measure their case/mobo/ram sticks before they buy it.

Pros: I have been building computers as a hobby and for hire over the past 18 years. This is the best overclocking HSF for the money that I have used to date. I currently have this HSF on a Socket 2011 i7-3820 CPU O/Ced at 5GHz. Under stable, full load crunching, temps on the highest core are 72C. To do better than that, you would need a custom water cooling setup for at least 2 to 3 times the cost. Temps will be even better on your usual i7 SB, IB or Haswell because they suck down less watts at any speed than this SB-e platform I have it on. This HSF is large, but highly efficient, quiet, and with these NewEgg sales, about the best bang for the buck if you are a serious overclocker that I have seen in a while. Try it. You will not be disappointed.

Cons: If there is any at all, it would be the size. In my opinion, this is a full tower only HSF. Purchase with that in mind and you will be fine.

Overall Review: Using with Xigmatek PTI-G4512 TIM because I'm obsessive about that last 2 degrees C on my overclock, but the included ZM-STG2 is actually decent stuff.

Cons: Was very difficult to install. RAM sockets allowed installation in one direction only, I'd rather have it mounted the other way but the RAM hit the fins and caused the fans to stop turning. The cooler also doesn't fit inside my case. I have to run with the side partially off. Will have to buy a new case to accommodate this cooler it is so huge. Previous top end Zalman coolers fit in the case with no problems, this one is just about 5-10mm too tall. The installation could have been easier, this was by far the most difficult CPU cooler I have ever installed, it was tricky but was worth it in the end.. the system runs cool and quietly.

Overall Review: It's a risk installing it on a socket 2011 system, depending on the motherboard layout.

Pros: continued...So I got it installed with some minor mods. Namely I had to dremmel off some RAM fin. WARNING:If ur RAM is taller than say Corsair XMS3!!! All mounting hardware is of solid make. NICE deep blue LEDs. Quiet at full. Dropped my temps at leats 10deg. 37idle, haven't hit 50 yet. Probably next summer. No sag! Looks AWESOME!

Cons: So 2 things...First off, better clearance would be nice. Secondly, it's only got a three pin connector (NO PWM ;(). The Zalman CNPS9900MAX-B did. So what happened? I would say this beast of a cooler deserves a 5 but there's just that missing pin...

Overall Review: So all in all, we got a pulse. If you got the skills to modify or are willing to sacrifice one or two sticks or are smart, etc...I would highly recomend this cooler...no liquid fushnaphooo! Just good clean air, tried and true. Rig: SaberFX990mobo, 3.6 8core, Zalman CNPS12X

Pros: HUGE, and I really mean HUGE surface area! Triple fan Push/push-pull/pull that is very well made Aesthetics are great Drastically lowers CPU temps like no other, works great with either the included Zalman Thermal Paste or Arctic Silver 5.

Cons: Will NOT work with RAM that has high profile heat spreaders, this thing really is that massive, had to buy a different set of RAM with a lower profile to fit, not removing an egg as I should have done better research. Technically removing 1/2 egg due to the installation process required, unless you have some experience in installing complex 3rd party CPU coolers, this will be challenging (took me about 25 minutes) however the instructions are decent, its was "bolting" the CPU onto the motherboard using the "Zalman installation bar" that was a bit frustrating.

Overall Review: Overall I give this a 4 1/2 - 4 3/4 eggs, just due to the few problems I had with this although NONE were performance related. This WILL cool off any CPU it supports and about the only thing that is going to cool better will be something along the lines of a Corsair H100i Liquid Cooler.

Pros: Fits my AMD 8 core perfectly Even had clearence for my RAM

Cons: Just remember to do your homework for your board/ram/case/videocards this is a big beast and the clearance is low