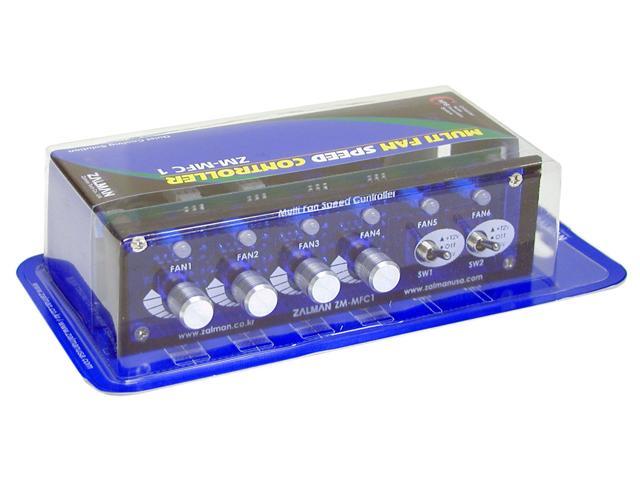 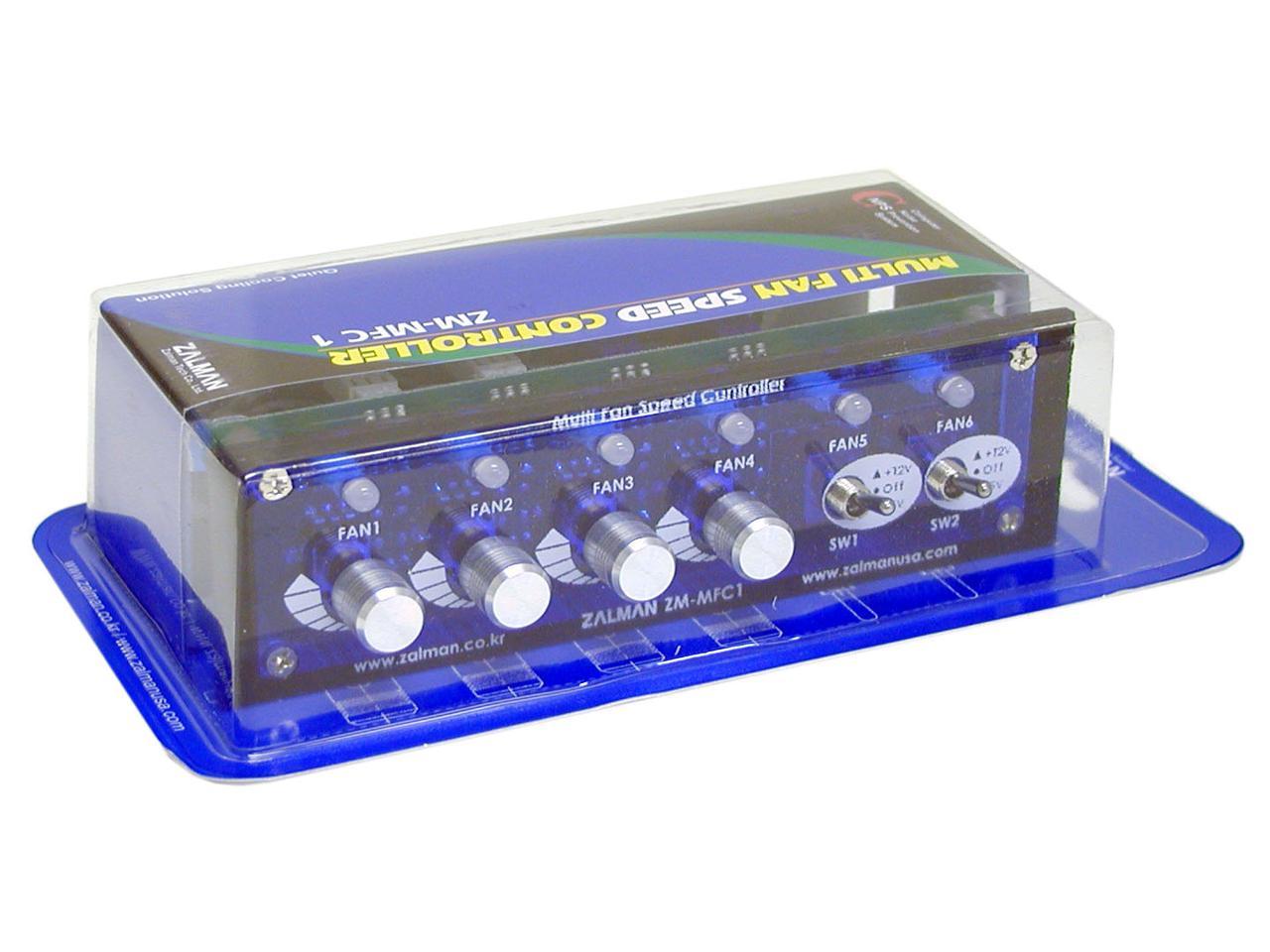 (191) Write a Review
OUT OF STOCK.
Specs
Reviews

Pros: Cheap, for the quality you get. Controls 6 fans.

Cons: BRIGHT blue lights. I don't know about everyone else, but the whole blue thing is starting to get a bit old. Also, I'm not a fan of the transparent blue faceplate, it doesn't go with my black case at all. But I came up with a fix for both of these things...

Overall Review: If you don't like the "I'm so incredibly l33t" look this thing gives off, and want something a little more modest, just take the faceplate off and paint the BACK of it black. You don't have to do anything special, just make sure to coat it thick enough so you can't see through it anymore. This alone makes it look 10x better. But I took it a step further, and replaced the ugly blue LEDs with a few red and a few amber water clear LEDs. It looks d@mn sexy now.

Pros: There are 4 pots on the back and 2 spdt switches. each of the six "nodes" has an LED. Blue light for the adjustable ports, and red for the switched ports. It adds a real nice flare to my case and makes it look pretty impressive. It also keeps my case whisper quiet.

Cons: Those LEDs are blinding. I am going to have to put a resistor in. And when a fan is set to a low RPM, the LED will strobe (as if to match the fan's speed) which would be nifty if it wasnt blinding me.

Overall Review: It works great, a little bright though. Would buy again.

Pros: Simple install. Helps control insane fan noise. Everything but the LEDs looks nice. Comes with plenty of connectors for your 3pin fans.

Cons: Very bright BLUE LEDs. If they were steadily lit, it'd be no problem, but as other reviewers have noted, they blink. I'll probably wind up disconnecting the LEDs as soon as I figure out how. Front plate is 1-2mm too short. Doesn't sit flush with the bottom of the dvd drive above it.

Overall Review: 90% of the speed control is within 50% of each knobs turning range. Not a big deal. It does its job with no fuss.

Pros: Controls the fans just as it is supposed to. The blue LEDs look good with my case.

Cons: The 4 knobs are somewhat cheap. After a weeks worth of use, the first knob keeps spinning after you are all the way up or down on the adjustment. I'll probably have to glue them on, but no big deal. Another odd thing is, the LEDs on the 4 adjustible channels flicker, and they are connected to ZALMAN FANS. The only one that doesn't flicker is connected to the cheapo fan that came with the case. When I first fired it up, something fried on the controller, but I don't know what it was. Stunk for a while but it works just fine.

Overall Review: Seems like a lot of cons, but this is a good looking controller, at least for my build, and it does what it says it does. It will only work with 3 pin fans and the two switch controlled channels have to have two-wire fans with no connector. Also, my BIOS won't read the fan RPMs now that I have run the fans thru this controller, even though Zalman provides split cables to keep the fans connected to the mobo. Oh well. I didn't run my CPU fan through this.

Pros: can take the voltages much lower than those 3.5 bay fan controllers. I run fans as low as possible for acoustic reasons (thanks, silentpcreview!) and some will not start reliably at lower voltages but can be tuned down once they are started. those smaller fanbus units usually go down to about 6-7 volts minimum. this one will go below 5 volts, and all the way up to very close to 12 volts.

Cons: i was never able to get the plexiglass stuff disconnected from the underlying base circa 5 years ago. if i had, i would have painted the backside black. as it is, i've grown to love it since it matches my matrix orbital blue LED screen just below it.

Overall Review: to the reviewer who said that some LEDs flicker, please realize that it depends on your fan and its characteristics, not this controller hub. flicker is inversely proportional to fan rpm, among other things. if you have a high-speed smooth rpm-sensing fan with 3 wires, you won't see flicker. the intel stock fan doesn't flicker. 80mm fans generally won't flicker. other fans, such as certain 120mm globe models, will. it really depends on your fan. if you have connected a two wire fan, you won't get an LED signal at all and that particular light will be dark. i've experimented with many over the past several years, and this fanbus can handle them all.

Pros: PROS!?!?! This thing is worth it's weight in platinum. Get one you wont be upset that you did. Comes with extenders and mainboard splitters.

Cons: I dont have 6 more fans to justify buyiong another one. Might have to buy six more fans!!!

Overall Review: Depending on your box and mainboard you might need one more extender than is shipped with the controller but in my case (pun?) everything worked perfectly with the nForce 680i SLI from EVGA. Got North Bridge fan and CPU fan wired to channels 1 and 2, two chasis fans in an in/out config on the 4 and 5 and then I two more chassis fans (exhaust) hard wired to channels 5 and 6 and this is just cranking cool air when I flip 5 and 6 to high RPM. Make sure you change your fan settings in BIOS to manual to get the most out of this baby.

Pros: The LEDs change brightness as you turn the knobs, the two toggle switches have an input on the back (you have to screw wires into them there are no connections for it) i kind of like them but i don't really see any use for them yet

Overall Review: I had 2 fans with molex connectors that I had to cut and splice with some extra wiring to make it reach to the front. But other fans with 3 or 4 pin connectors should have to problem. great product.