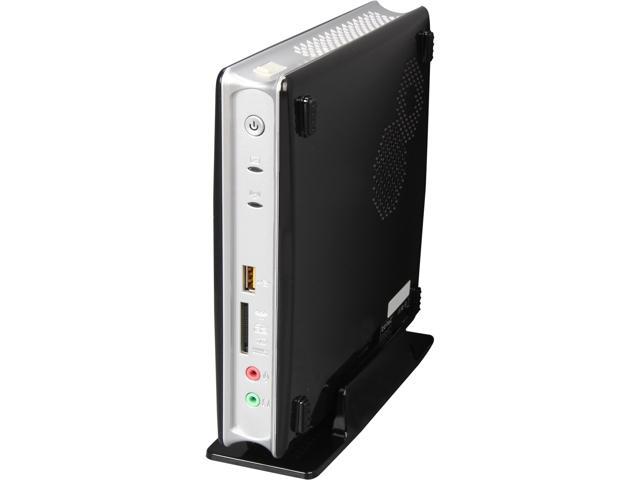 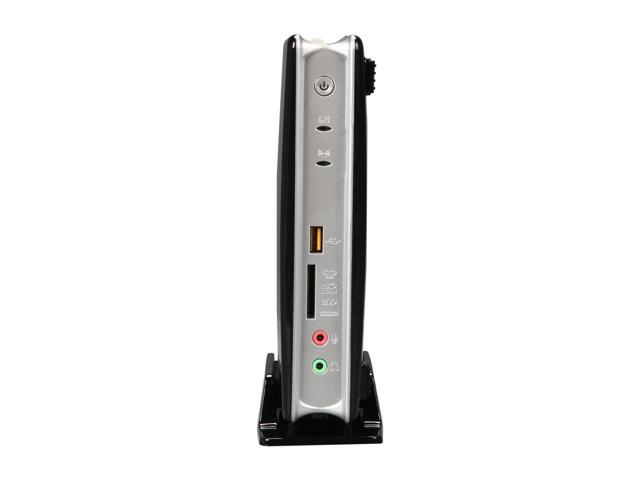 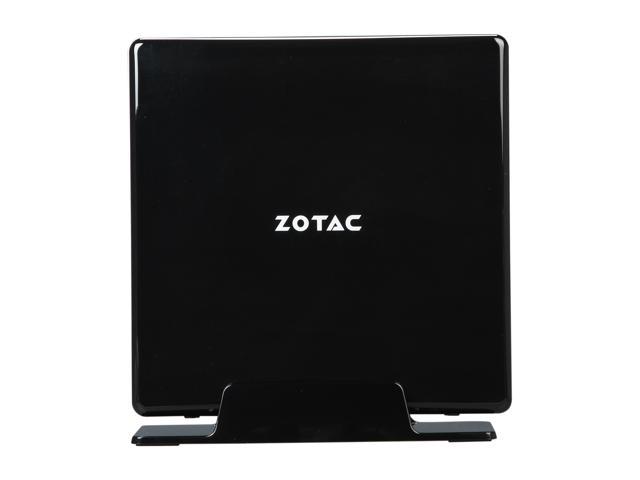 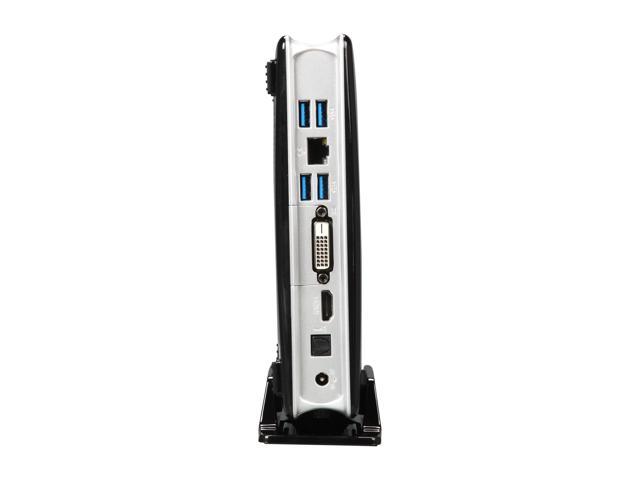 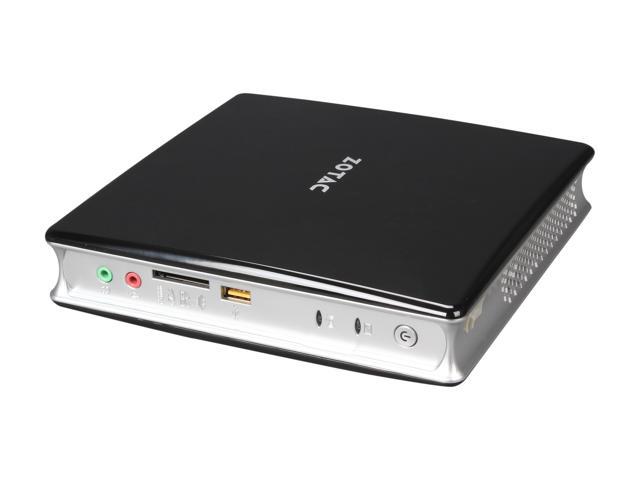 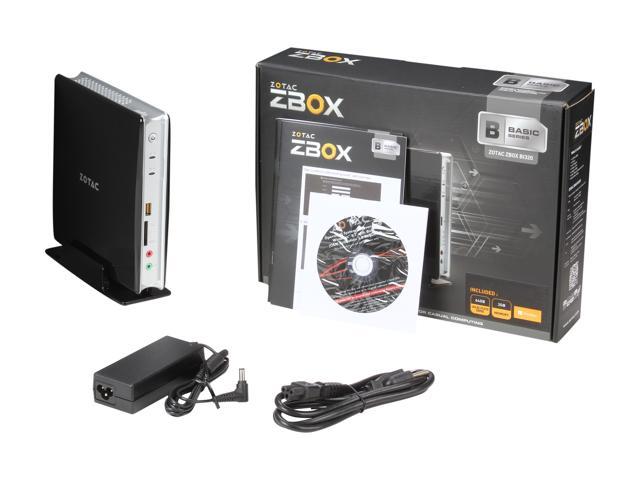 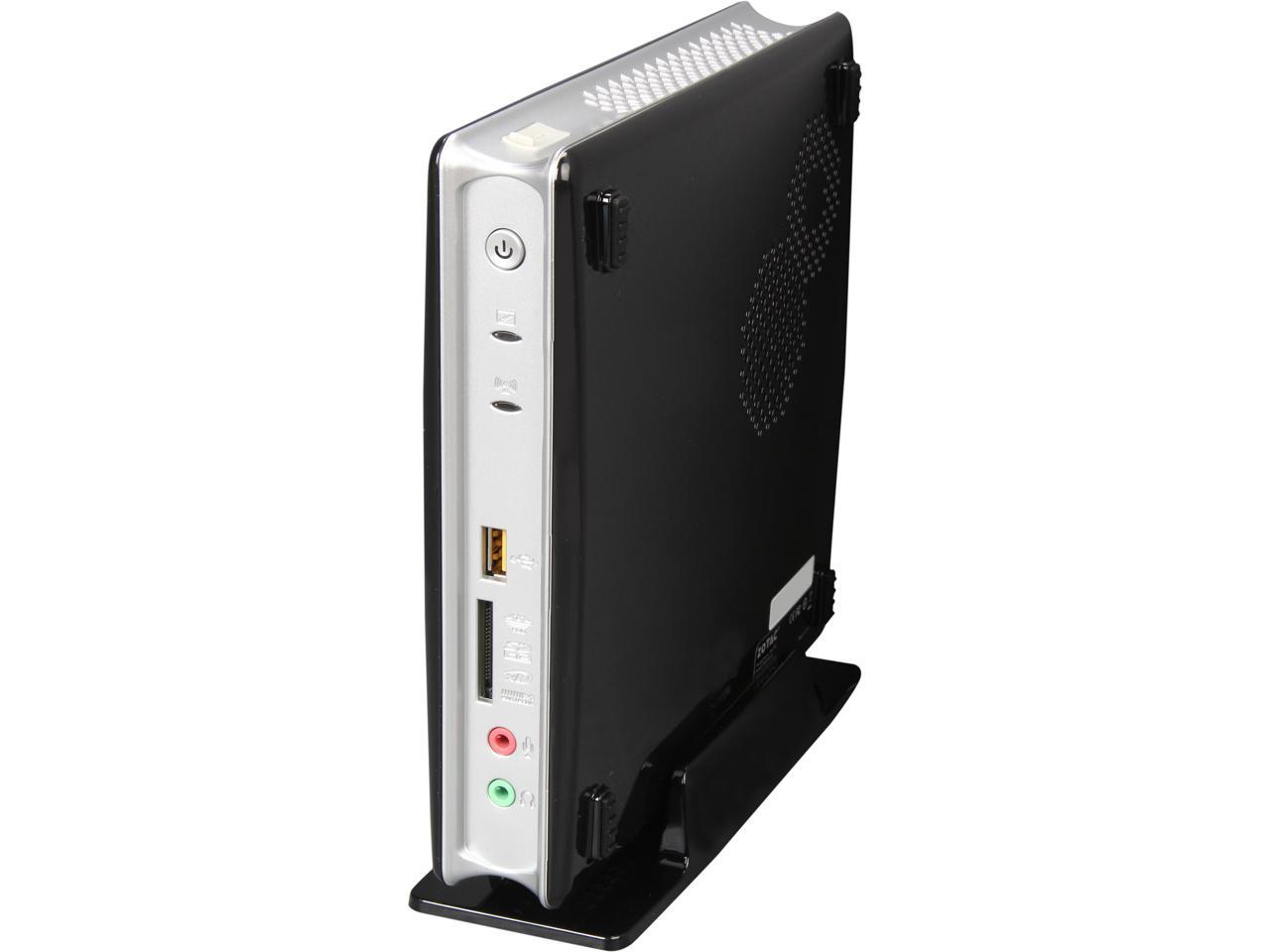 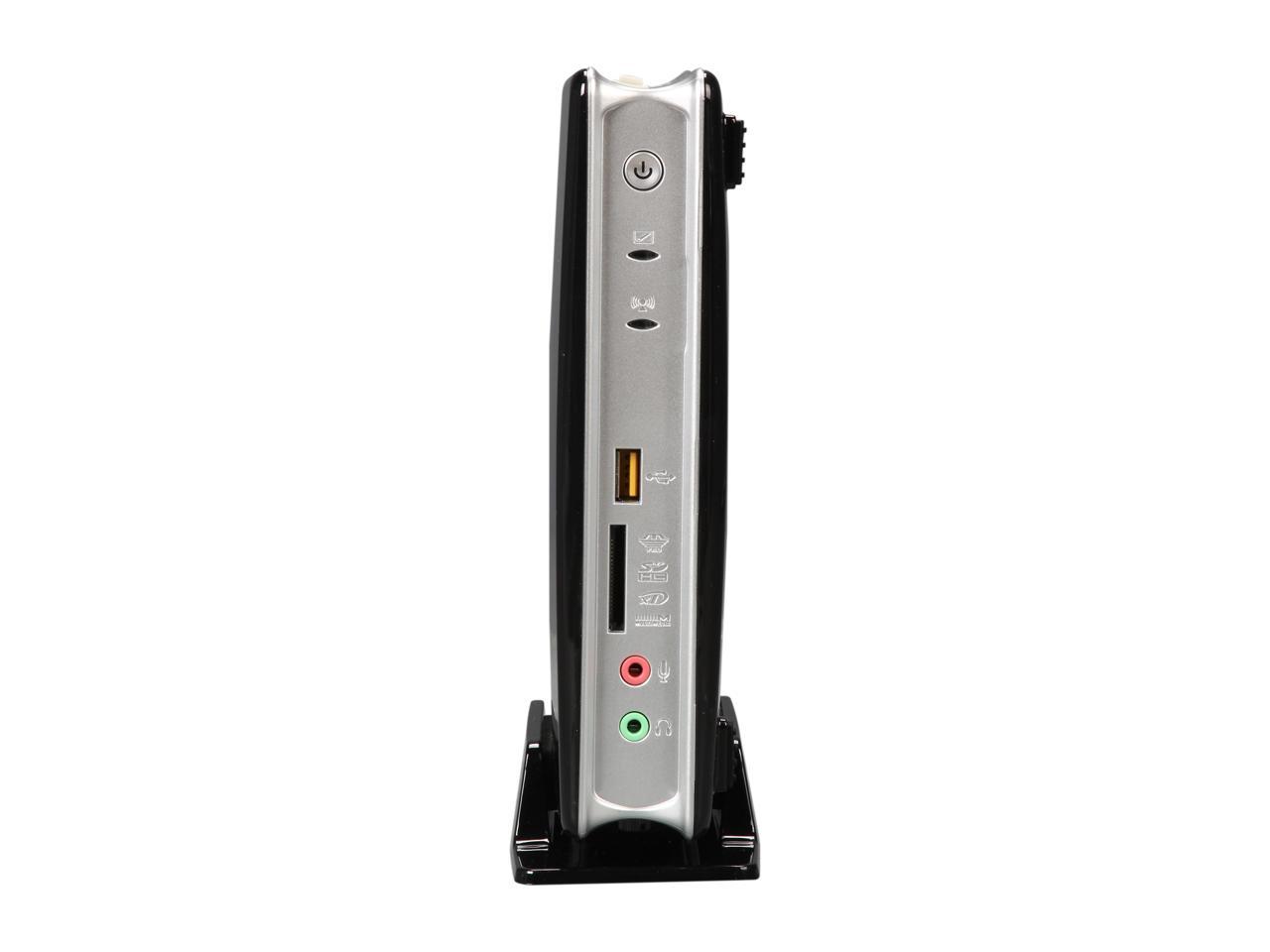 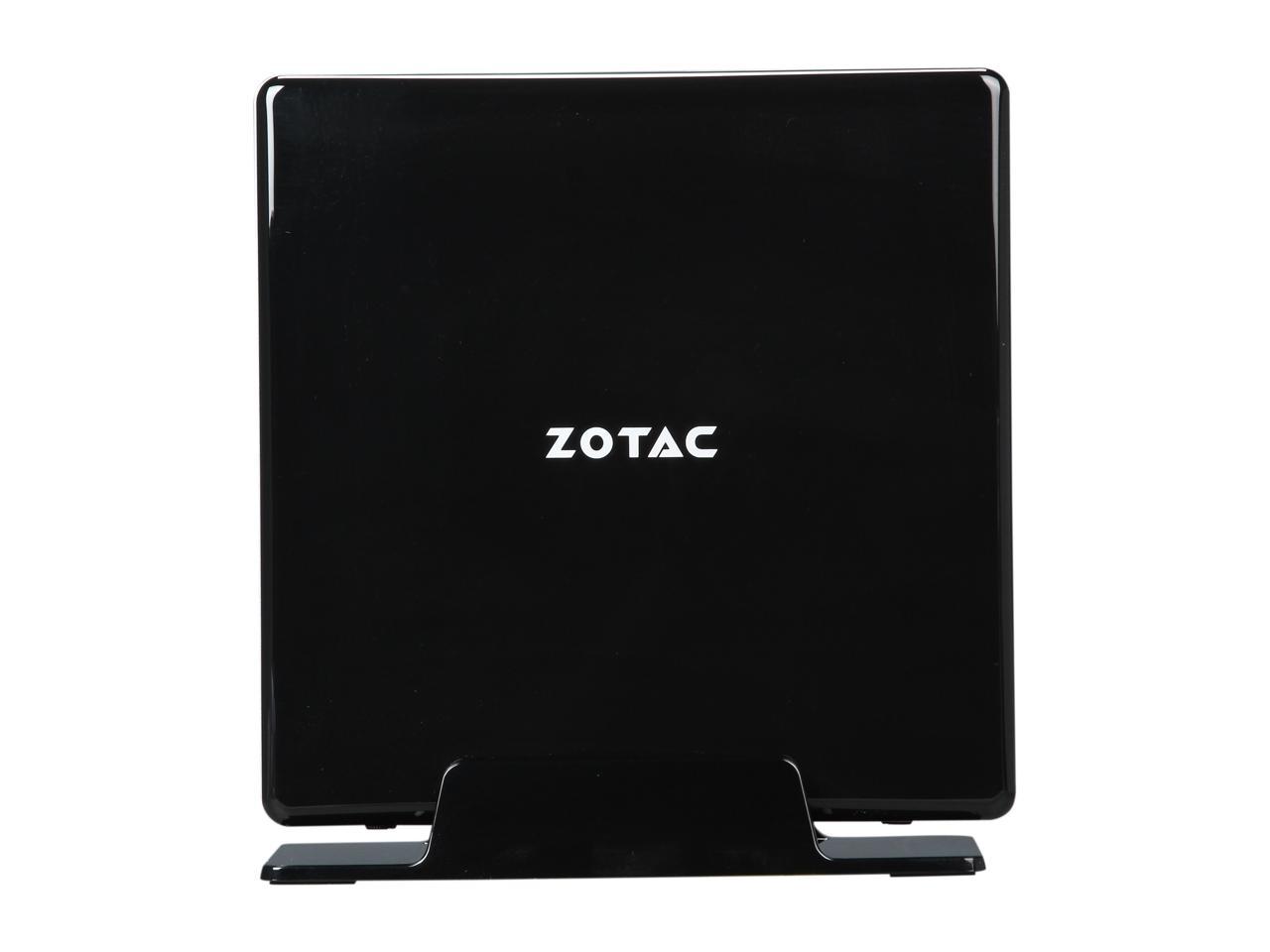 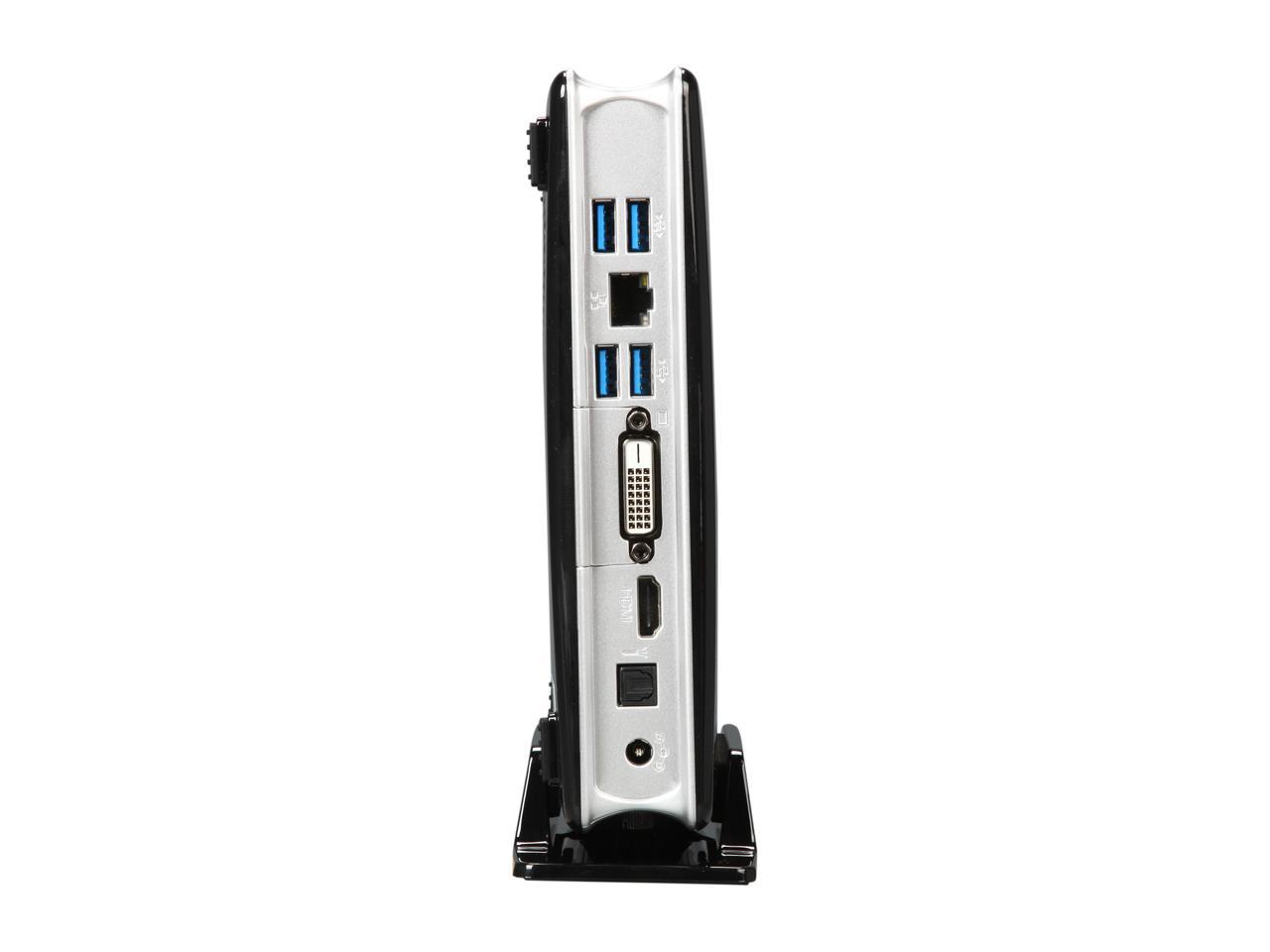 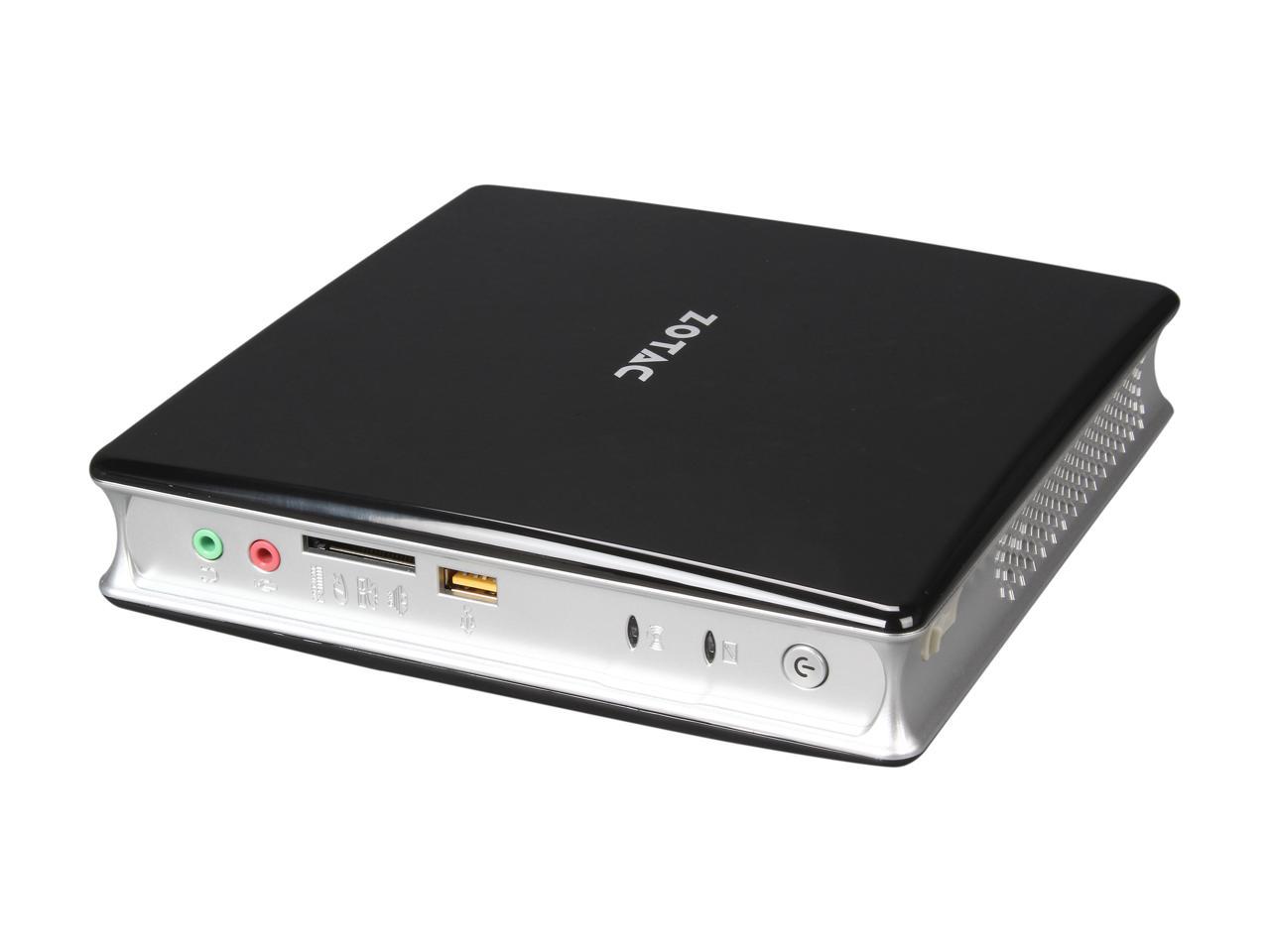 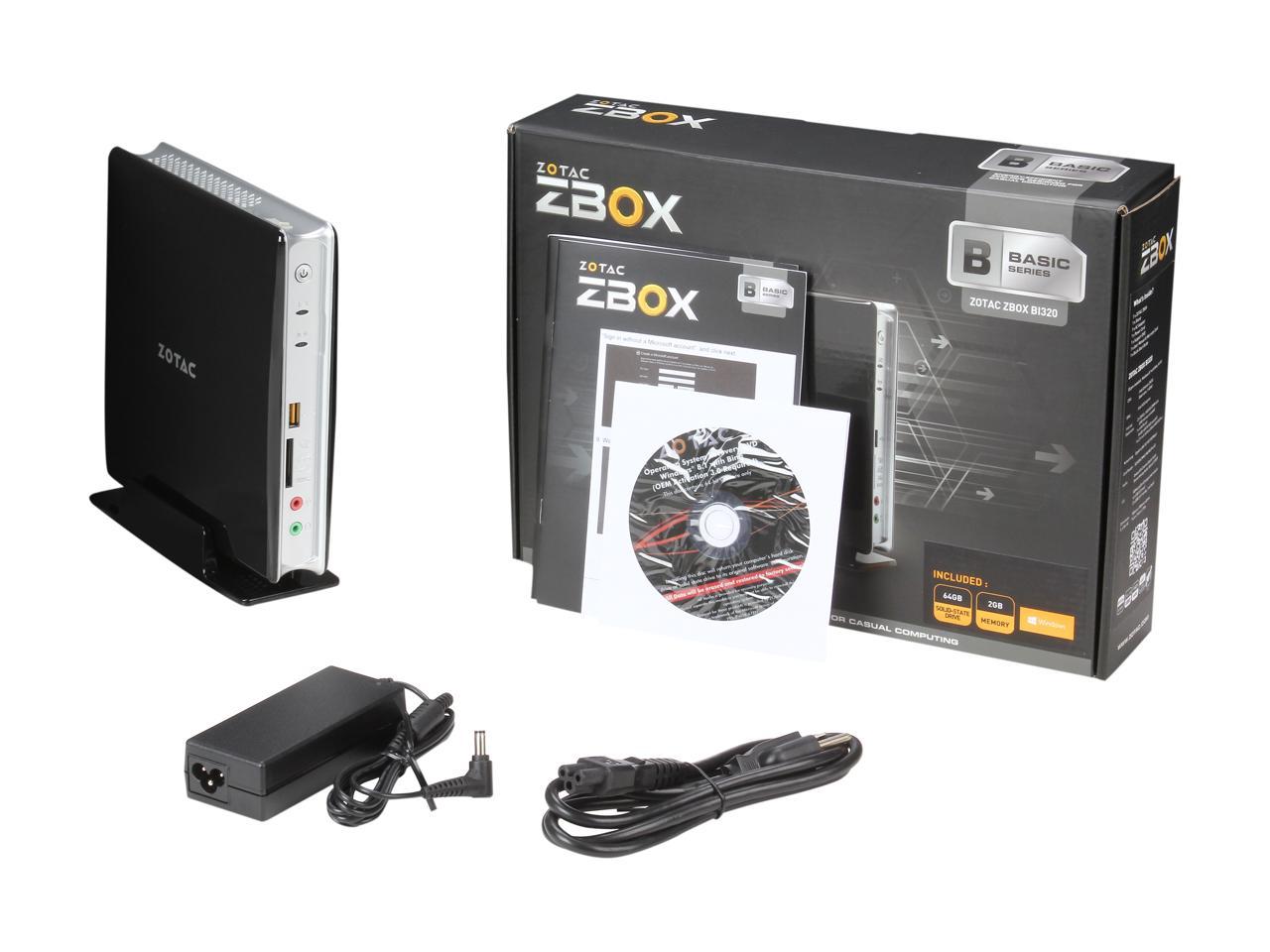 Learn more about the ZOTAC ZBOXBI320/U/J/TWW2

Pros: Fast, small, nearly silent, Windows 8.1 on SSD = fast boot, all the right ports (for me) -- 4xUSB 3.0, Gig-Ethernet, HDMI. PRICE - How can you go wrong with fully working out of the box elegant HTPC for $160 with full Win 8.1. The little 64 GB SSD is plenty for Windows. The one or two other mini-PCs with Win8.1 at this price point have only 32 GB SSDs which is very tight. This has enough room for media apps to go on the SSD also One great plus is the SSD is IN ADDITION to an open SATA connection inside for any 2.5" laptop drive, 6Gbps (up to 9.5mm height). I put a Seagate 2TB HD in there to hold media files - pix, video, music, etc. Great for a media server -- fast SSD + space for big HD. Perfect. Lots of other mini HTPCs have either SSD OR HD, this has both which I think is the ideal combo. 2GB ram is likely enough but I threw another 4GB Crucial stick into the open DIMM slot, cost <$40 here. Takes 1 minute to open the case (no screwdriver needed). Drop the extra RAM in. There is a list on the Zotec site (look under Downloads on the BI320 product page) of approved RAM sticks. Follow the specs exactly (DDR3L-1600) and you'll have no problems. The Z-Box didn't seem to mind the "mis-matched" sizes - 2GB + 4GB sticks USB3 seems as fast you would expect. I have 2TB WD USB3 drive plugged in there. Z-Box runs Crashplan and acts as family backup server as well as media server. The 2 core Celeron processor seems plenty fast enough. Windows is very snappy. No issues with iTunes, VLC, XBMC/Kodi, etc. The processor was just hitting 100% with 3 inbound Crashplan backups and an outbound backup of this box to the Crashplan cloud, all running simultaneously. This isn't a gaming machine with only the internal Intel graphics but way more processing power than an ARM chip in a NAS box would likely give Nice help forum on the Zotac website.

Cons: Not Zotac's fault but expect all the Windows updates on first boot to take a couple of hours to download and install. No stars off for this, No IR. No Bluetooth, No wifi -- didn't bother me. Your needs may vary. (I added a $20 Rosewell MCE remote with USB IR receiver which goes nicely on the front USB port)

Overall Review: Logitech Unifying USB dongle didn't like being plugged into USB 3 ports, moved to USB 2 port on the top and now it's rock solid There is a similar Zotec box with Win8.1 with a faster quad core Celeron N2930 chip, the ZBox, CI320 Nano with Windows. Icouldn't justify the $240 price for that. It appears from the Zotac website ( http://www.zotac.com/z-zone/zbox-win8.html ) that the CI320 box uses the internal SATA port for the SSD. That box does have IR and Bluetooth and an eSATA port which the BI320 lacks. If you need those, that value equation might work for you. FYI CI320 only has one DIMM slot so if the included 2GB isn't enough, you have to throw away that RAM stick to upgrade (vs add more RAM in second DIMM on this box) To answer a Q raised in one of the other reviews, when you open the box of the BI320, the SSD isn't visible. It's likely on the underside of the PCB which isn't user accessible without breaking the warranty sticker. As mentioned, the SATA slot is open for you to add an HDD or SSD drive that way If you want Windows 8.1 and all the familiarity and flexibility that offers, this is a great deal. If you are going to strip off Windows and use a free OS (e.g. Linux) then a bare-bones miniPC might be cheaper.

Pros: Just bought one of these for a media box.. so far so good. disliked Win 8,1 and had an extra W7 license so I wiped it. I added a 240GB SSD for storage since there was an open sata slot. more than enough for my MP3 collection. I have a larger external drive for my videos. I also added a second 2GB memory stick. 2GB just isn't enough. 4GB works well. it also looks neat in my entertainment center.

Cons: Processor doesn't have a lot of Oomph but I knew that buying it. From personal experience anything with shiny black plastic always tends to show scratches easily. cheap plastic construction compared to the Haswell Nuc I built last year but then again this thing is almost 3 times cheaper cost.

Overall Review: one probably dumb question I have for the experts.. where is the M-Sata Slot at? it isn't visible, it would be nice to be able to swap it out for a larger one so I can put more apps on it.

Pros: Came with some memory and a 64gb SSD. I think the form factor and vertical stand is great. Low noise after adjusting in fan settings in Bios. Seems pretty quick with a 500gb SSD and Win 8.1 or Win 7. It was kind of cool to get a fully working PC (with OS) for such a low price.

Cons: I tried to warm up to windows 8.1 for a while, but it seems like a car that has had features removed I like and new features added that I don't care about. I will take a shot at Win 10 and see if they put WMC back in so my Homerun HDTV can stream and record.

Overall Review: If I had to do it over, I would probably purchase the barebones version at Newegg Zotac ZBOX-BI320-U Intel HD Graphics Integrated by CPU Black Mini-PC Barebone System. I would wait and get it on sale.

Pros: all in one, comes with win 8 on SSD and has room to add another drive. Super quiet, no blindingly blinky blinky lights going on to distract you. More than powerful enough to transcode video while streaming etc..

Cons: no Wifi, no way to add internal Wifi, limited options for add-ons unless its USB.

Overall Review: Although my review was kinda goofy it is meant to drive home the fact the machine is great for home media playing. It has enough CPU and memory to play most video at 1080p. The wifi snafoo was my own fault, THe unit has built in Gb network. This thing is quiet, I have it running in a white room and can not hear it under normal usage.

Cons: Hardly any. I don't try and use wifi or add gadgets or do anything this machine is not geared and ready to do

Overall Review: I run Ubuntu 16.4 64Bit with Cinnamon desktop on one of these machines, and headless KodiBuntu on the other. The are ROCK SOLID machines that have ZERO heat problems, and are fairly quick for what they do. My Kodi version is wired via house eth to my router, and video playback of 1080 with file sizes as high as 30Gb are no problem. I run Plex server on the same machine as Kodibuntu. I run Kodi with my phone as the remote. Zero issues. The machine I run as a desktop, I run with cordless keyboard and mouse, and I've got 4 drives hooked up to it's 4 USB 3 ports. I have an 8 ports USB3 extender hooked up as well. The machine runs; Dropbox, Google drive, Geary, Evolution, Chromium, Firefox, Gimp, Audacity, Ink, Shotwell, Clementine, and a crapton of other Linux software like LibreOffice, etc. All free. All compatible and comparable to the OS X or Windows versions. Not for everyone? Sure. If you don't know how to download a linux distro to a USB stick with Unetbootin - and you don't know how to boot from a usb stick in Bios, then DON'T get this. Windows on this machine is a pig. Erase it immediately. Linux Mint 17 or Ubuntu with Cinnamon are the way to go for people that want a familiar Desktop that can do familiar things using free software and a little bit of research / self education. THIS machine kicks serious rear end at a ridiculously good cost when considering the i/o, speeds and formats, as well as stability ( cooling, silent fans ) and connection options. Most of the other mini PC's in this category have all kinds of issues, or are over priced for what they offer. 4 USB3 connections and DVI / HDMI / Optical are worth it alone, let alone the fact that I upped the RAM to 8gbs without any heat or stability issues.

Pros: Tiny. It's the size of ... well.. it's tiny... Weighs nothing, makes almost zero noise, uses almost zero power, and has all the features I could want in an work box.<br><br>I deleted Windows and install Ubuntu and it rips. Graphics speed is excellent for a work desktop, and there's enough room to stack another SSD inside it, which I did.

Overall Review: Contrary to what some, *cough*, reviewer(s) might infer, it does come with an SSD, but not the kind you'd buy in the store. It's an integrated card that you likely cannot use in another PC. You *can* add another SSD, as I mentioned above, if you need more storage.

1 out of 1 people found this review helpful. Did you?
Manufacturer Response:
Hi Randy, We are glad you are satisfied with the performance of the BI320 but it definitely should not have died on you at 13 months. Customer satisfaction is one of our top priorities and we would like to help out. Please open a RMA Request at: https://www.zotac.com/us/support#rma and include the note "RMA approved per Dan" in the Problem Description section. For further troubleshooting options you can contact our Support Team by calling 877-599-6822 Mon - Fri 9AM - 6PM, via live chat at www.zotac.com/support, or by emailing support.us@zotac.com. Sincerely, ZOTAC
Anonymous
Ownership: 1 month to 1 year
Verified Owner
kodi works well7/1/2015 2:28:09 PM

Pros: Price, performance and quality are all outstanding