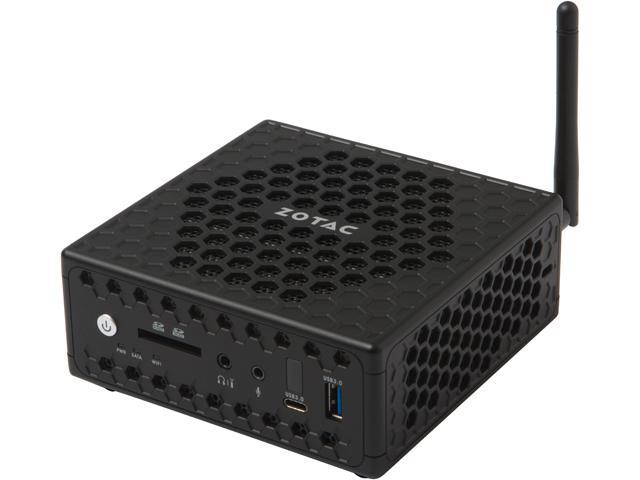 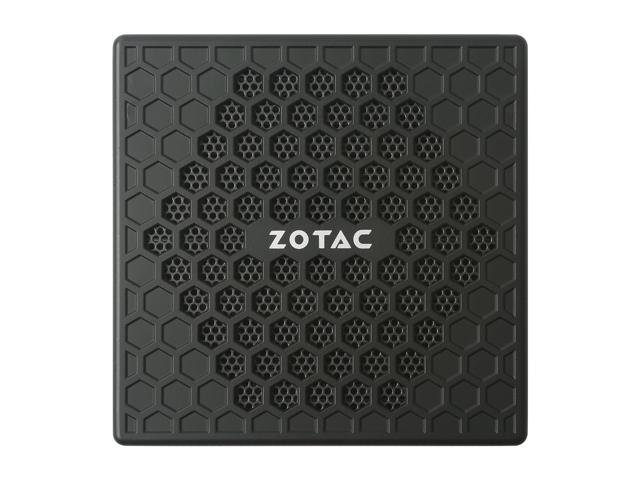 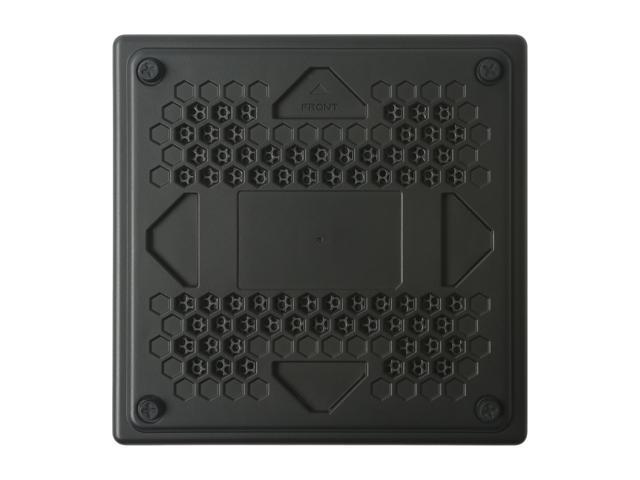 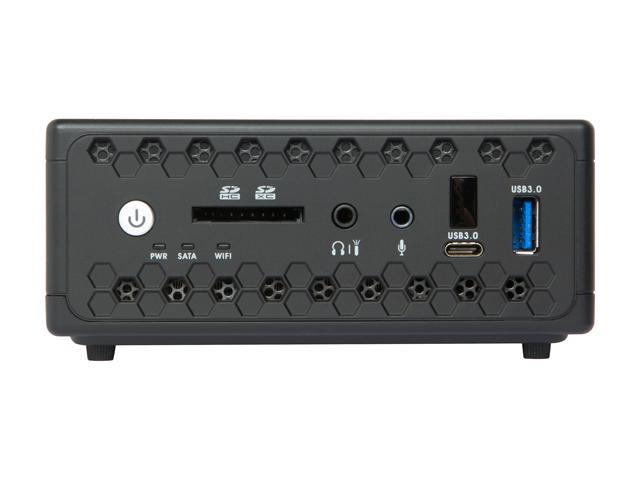 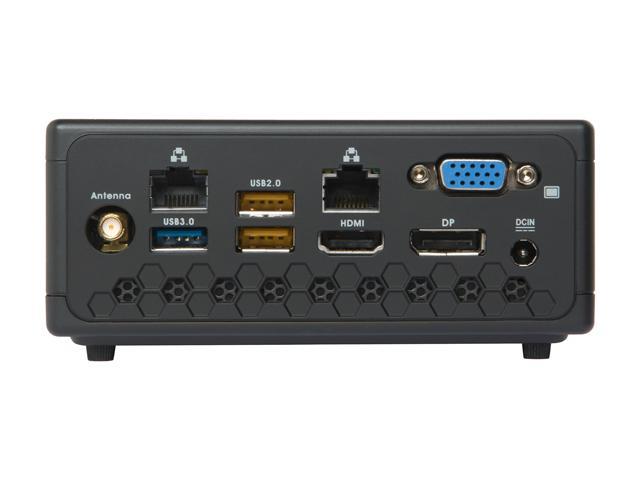 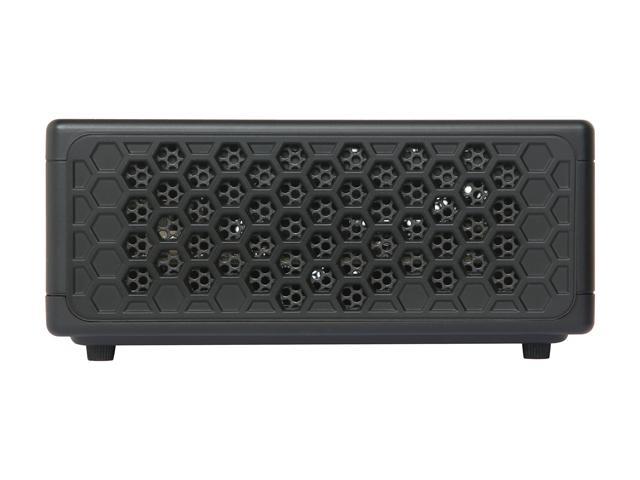 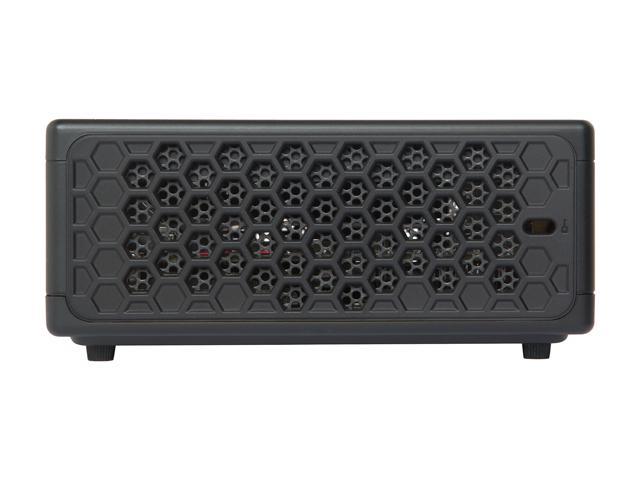 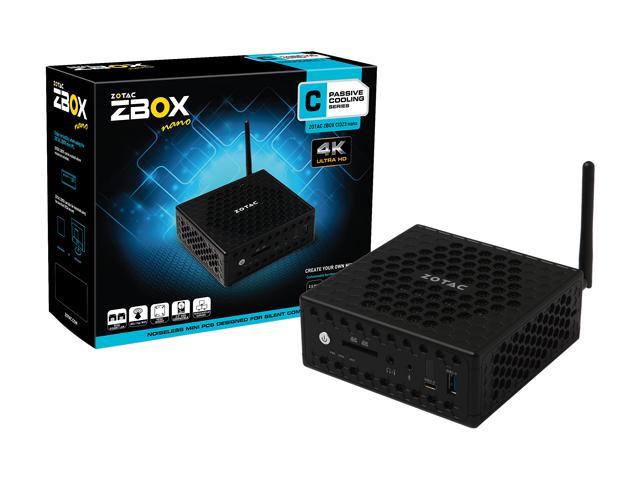 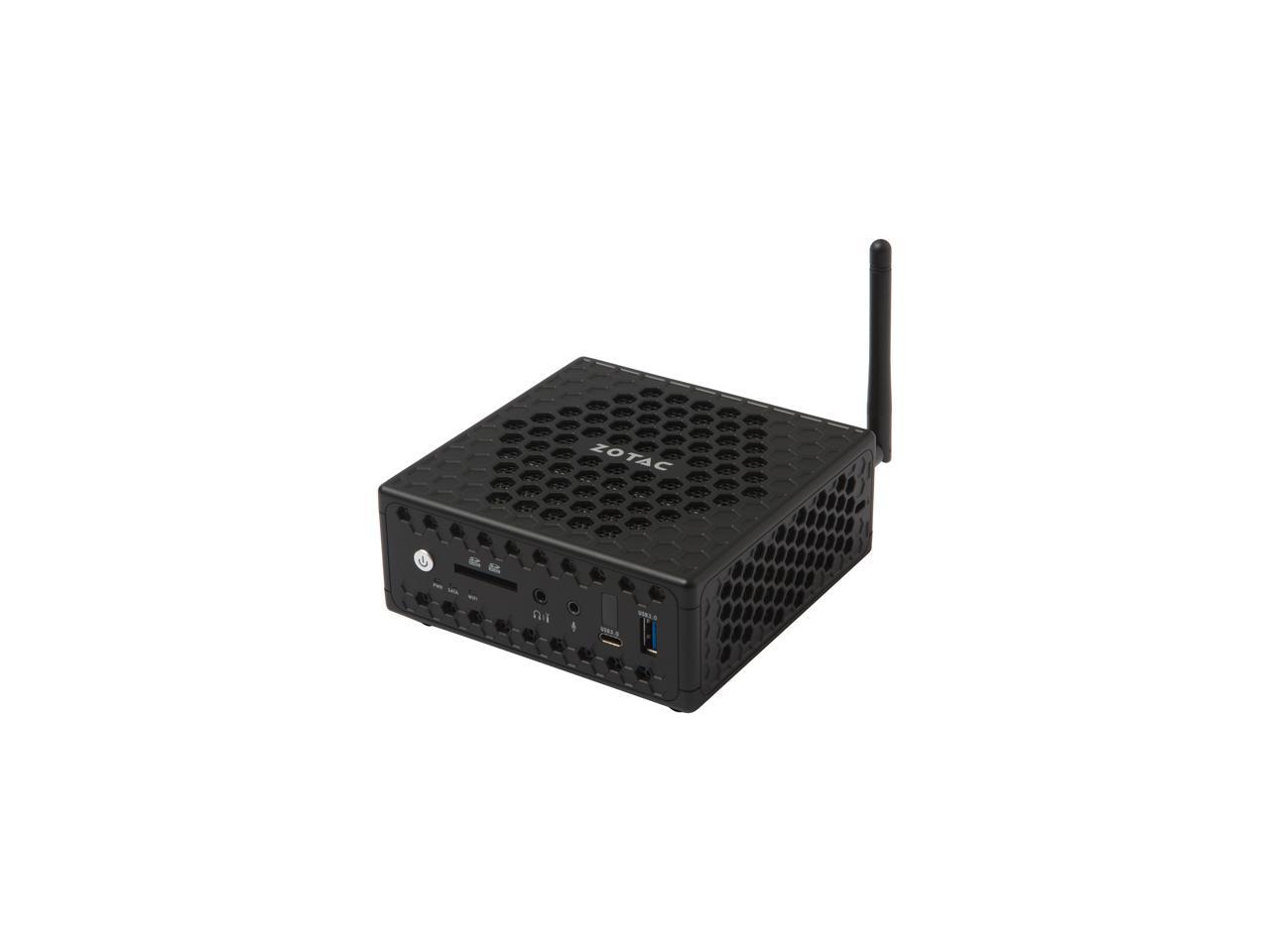 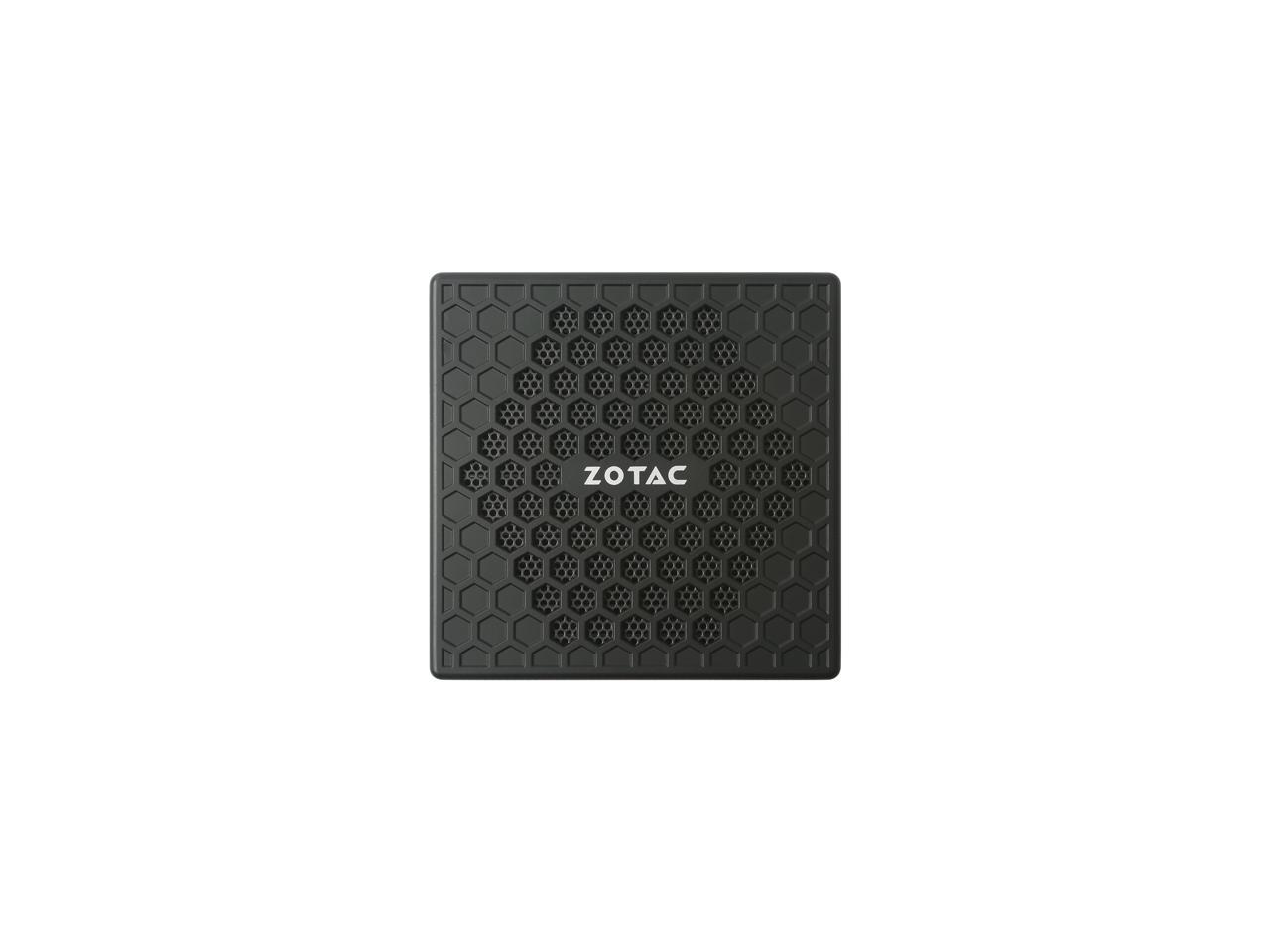 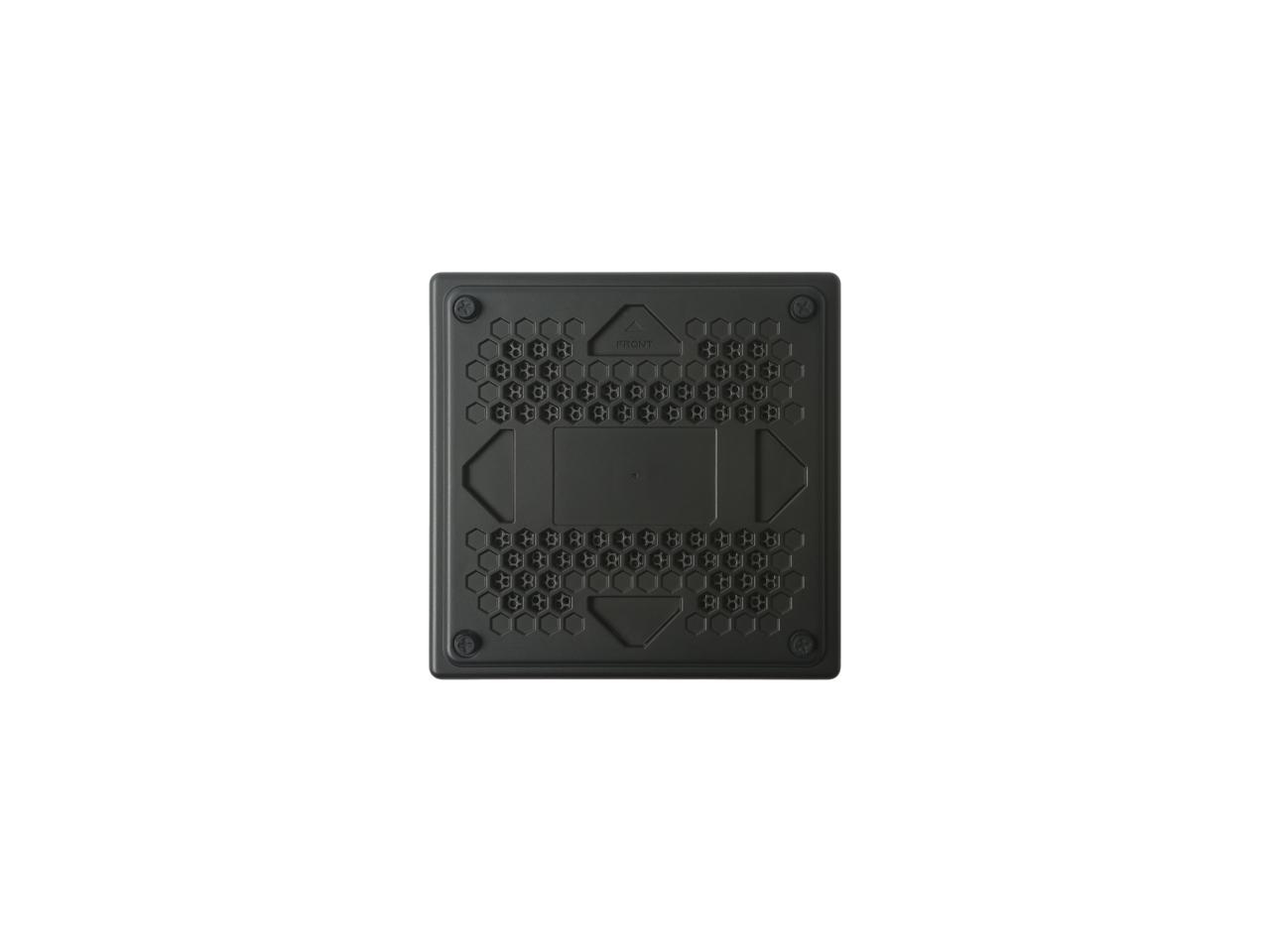 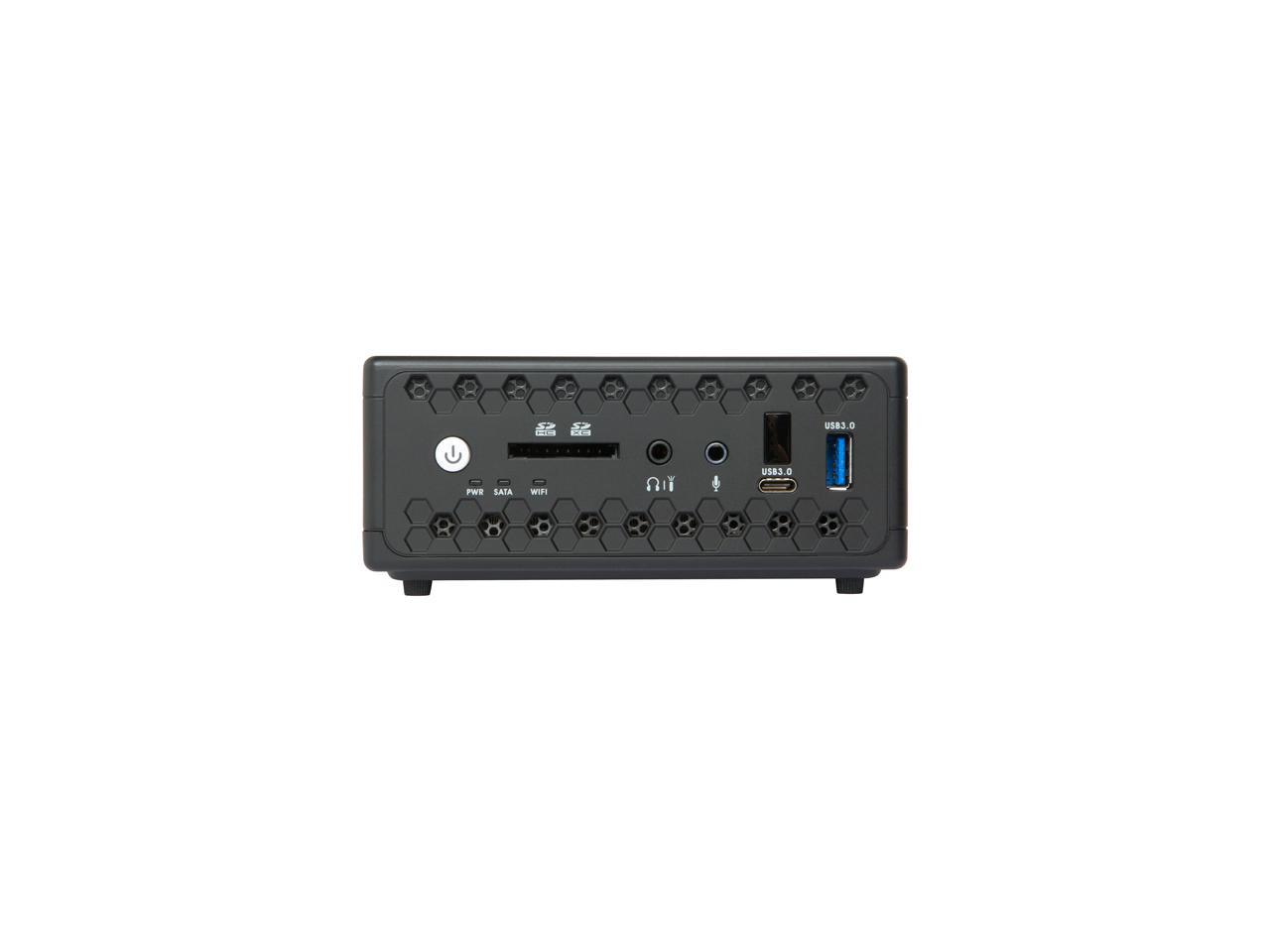 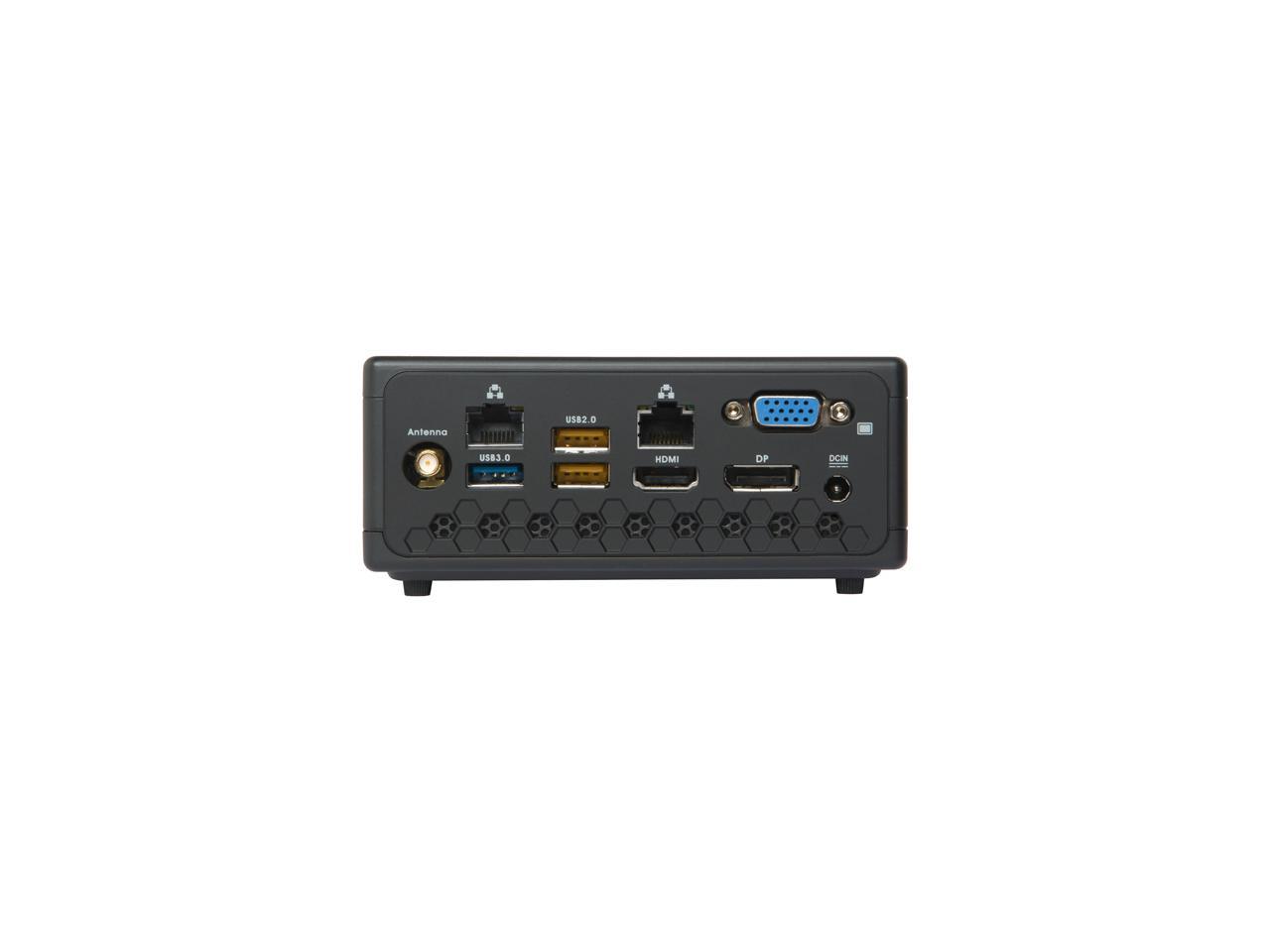 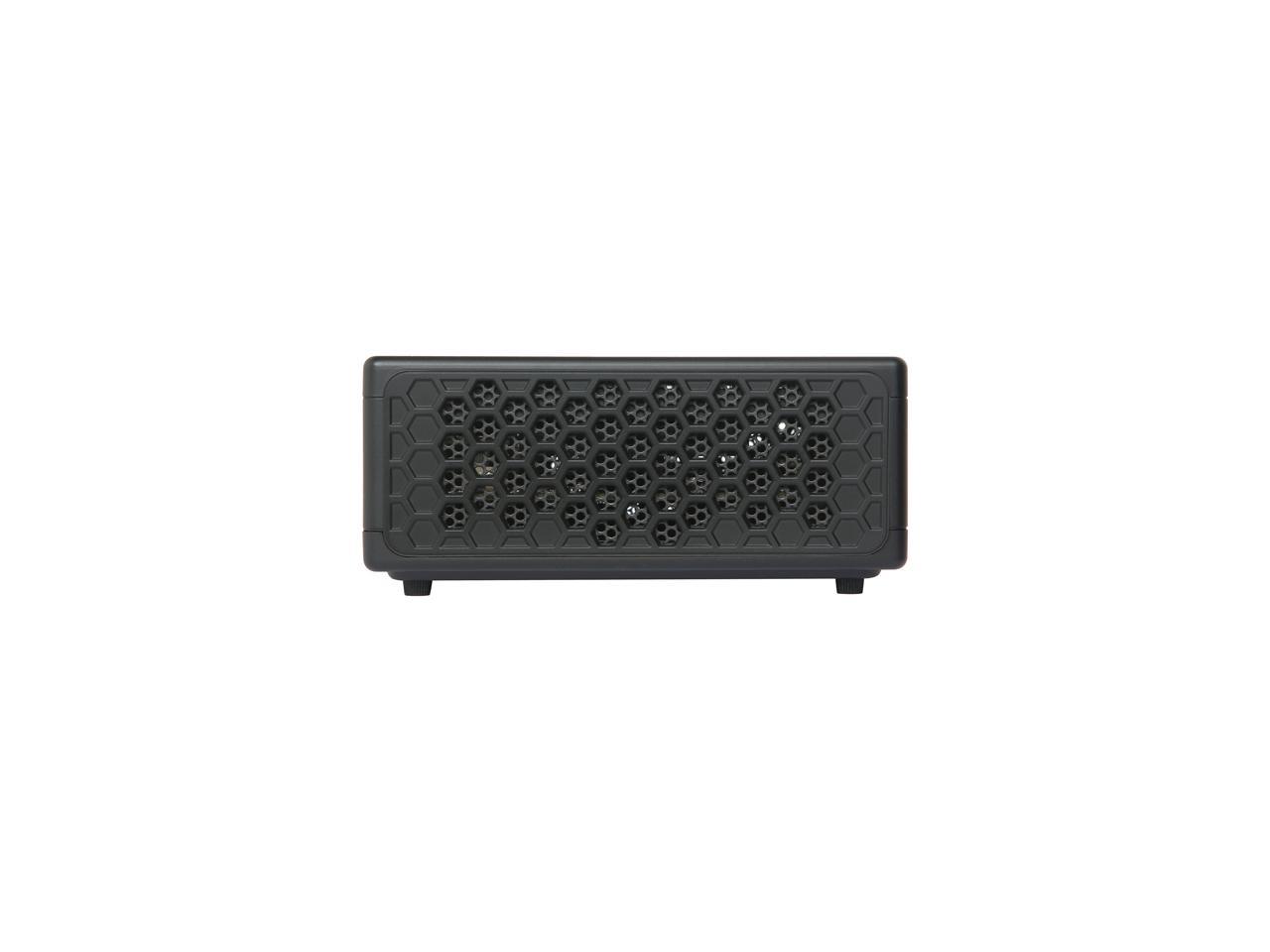 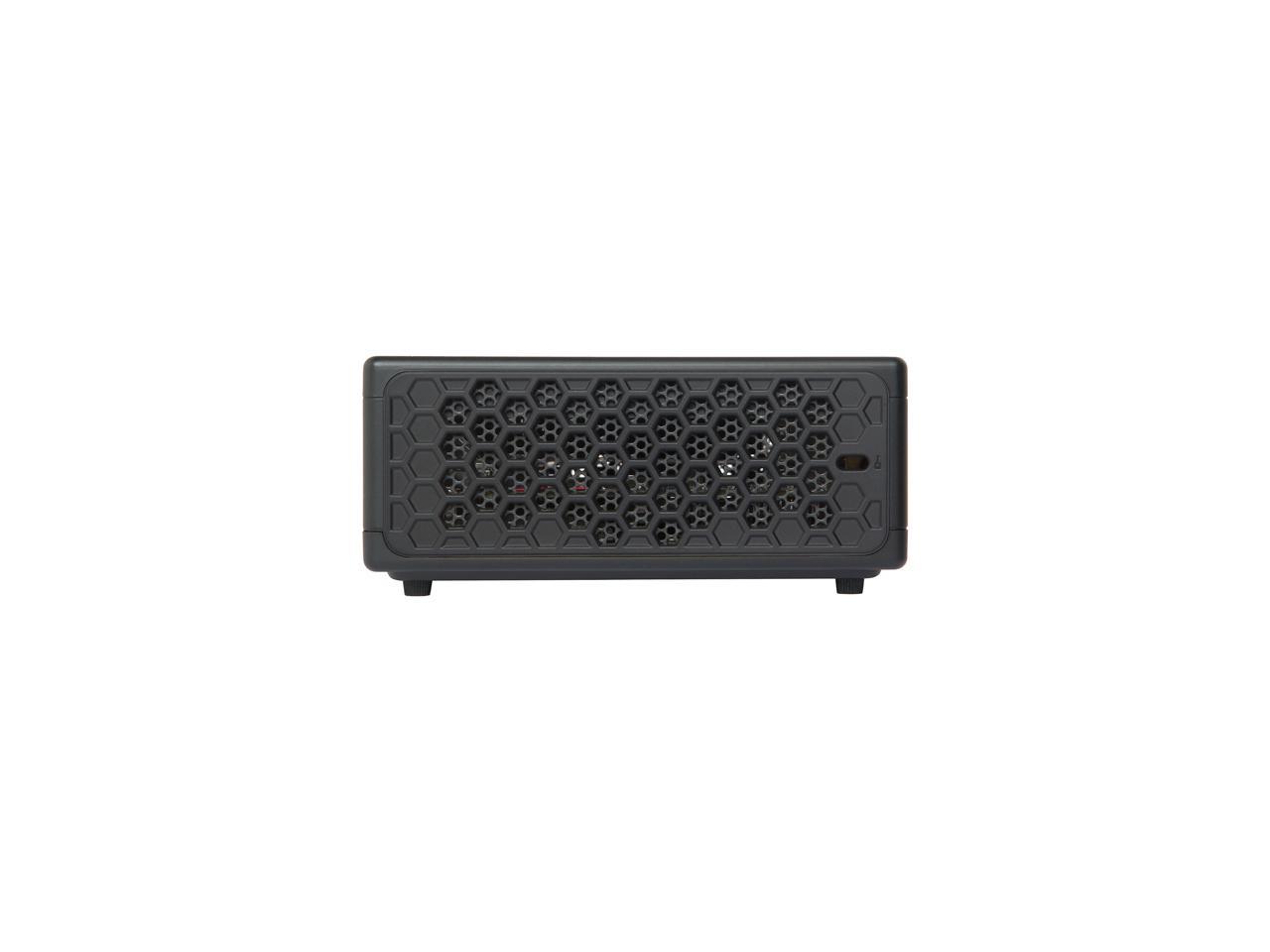 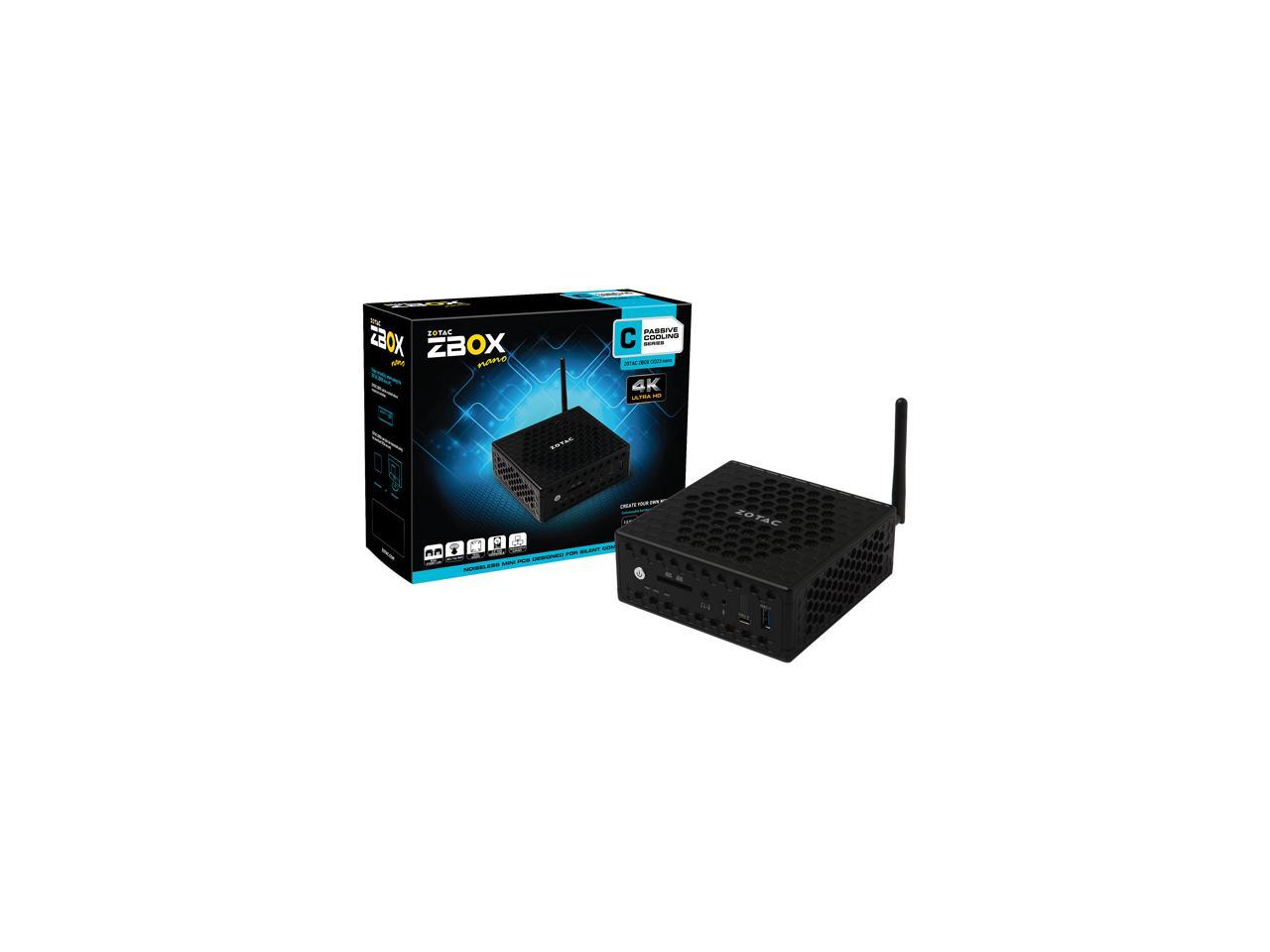 Learn more about the ZOTAC ZBOX-CI323NANO-U

Pros: - Small - Quiet. It literally makes zero noise, ever. - Powerful internals - Dual 1G NICs makes it great to turn into a pfsense box - Cool. Does not run hot at all. I have this little unit sitting on my desk and functioning as a router. It uses Realtec NICs and I've seen some complaints about those failing to autonegotiate, but I've had no issue here. I added 4GB of RAM and a 60GB SSD and it purs right along. I'm able to encrypt all of my Internet traffic (PrivateInternetAccess's OpenSSL option) straight from the router and the quad core CPU handles it just fine. I can download at the full rate Comcast provides me, which is 120Mbps, so there's no concern that this little thing is beefy enough to handle cryptographic functions at a fast rate. CPU utilization never peaks past a few percent as well, so I'm sure it can handle even more encrypted throughput without breaking a sweat.

Cons: Getting pfsense to install off a USB stick was a pain until I figured out that changing the BIOS to Legacy was the way to go, then it worked just fine. Apparently a driver update has resolved this issue, but at any rate you can do it yourself without updating anything. As I say, just switch back over to Legacy from the BIOS and you'll have no troubles.

Overall Review: I've tried pfSense 2.3 and OpenBSD 5.9 on this, both run great. You can boot and run from USB, SD card, or install a 2.5" SATA drive. I ran pfSense for a few days from an SD card but just missed OpenBSD too much so I threw in a small SATA SSD and loaded that. The wireless card is not recognized by pfSense, but OpenBSD does see it and uses the iwm driver for it (no hostap mode, you can only be a wireless client). The CPU is is capable of virtualization, some users are using Xen/KVM on these with a few small VMs. I plan to try that out when I get a chance. There are also many reports that 16GB of RAM works just fine in the system although the specs say 8GB is the max. I may give that a shot too, will update the review if I do to note if it's a success or failure.

Pros: This is a great little PFSense box. It is currently installed at a small office with 6 workstations. OpenVPN and SNORT running and the CPU usage sits at about 3%.

Cons: The only con I had was what another reviewer pointed out - the BIOS needs to be set to legacy boot.

3 out of 3 people found this review helpful. Did you?
Larry B.
Ownership: 1 month to 1 year
Verified Owner
These are fantastic for cheap pfsense or Linux firewall routers4/21/2017 9:23:29 AM

Pros: Install a 60GB SSD and 8GB of RAM and you'll have a high end firewall router. With PFSense you will need to install a Realtek NIC drivers for it (google for "if_re.ko ci323" - first link on result - on the pfsense forum), otherwise NIC will stop working under heavy loads. These also works good on Windows 10, with SSD installed. Can use laptop 2.5" hard drives.

Cons: Unable to disable card readers, Bluetooth and WiFi (could remove card if you wish).

Overall Review: I bought 8 of them so far. Will continue to buy more as needed by clients.

Cons: The USB3.0 Type C port might just as well have been Type A. I don't have any Type C cables.

Overall Review: I'm using this as a home server for DNS, Samba, DLNA server, and centralized backups. I've had no issues after upgrading the kernel (see below.) I installed from a flash drive with no trouble. I've tested video and it plays fine, but I don't use that. I also don't use wifi. The only real load it gets is encrypting backups but it is more than fast enough. I'm really happy with it for my application. I added: Crucial 8GB Kit (4GBx2) DDR3L 1600 MT/s (PC3L-12800) SODIMM 204-Pin 1.35V/1.5V Memory. Crucial MX300 2.5" 525GB SATA III SSD. Normally the CPU runs about 50C and the SSD about 57C. Under stress testing I can push that to 67C and 65C. Note that the CPU runs at a maximum of 1.6GHz under my configuration and I haven't investigated that. I think the system power draw was around 15W-20W. I'm running Centos 7 which came with kernel 3.10.0-327. I had some issues with the Intel 915G graphics that were resolved by upgrading the kernel to 4.8.1-1.

Pros: Low power 60 GB SSD 4 GB DDR3 1333 RAM (I had it lying around) Windows 10 Mediaportal HTPC setup. quick boot time with an SSD Doing 5.1 audio without an issue via HDMI silent. I wouldn't even know it was in the room if there wasn't a power led.

Cons: Wish it had dual Intel NICs. Large price gap between the lowest model and the next model up. I don't feel like either of these are cons for my scenario, but if I had to list a negative, those would be the only 2 I can think of.

Overall Review: So I have now purchased 2 of these devices. The first one I bought to use as a low power replacement for my HTPC. It is averaging about 23 watts of power when on (probably less, I only measured it during the windows install and a few video playback scenario's), and does everything my old 100 watt HTPC did without any issues, and at what I imagine is about 1/16th the size. I run Mediaportal with a mediaportal server as a backend (this is running client mode only). No issues so far. I haven't tested it with 4k video, but I don't think it could handle it. I purchased the second one to use as a pfSense box. The only negative I can find (so far) with it is that it doesn't have the recommended Intel nics. If it ends up being more of a problem than a solution for this, I'll end up using it as another HTPC and look into alternatives for a pfSense box. I have a feeling that for my home use scenario, it will be a very capable pfsense box.

Cons: I didn't buy it sooner

Overall Review: I had no problems installing Ubuntu Linux 16.04 on a 120gb SSD. Everything was recognized including the two 8gb sticks of ram for a total of 16gb. My plan was to build my own router but I think I'll get another couple of these and use them for desktops in some situations. It is surprisingly capable for the price and size. I am interested to see how Windows 10 would do on this.