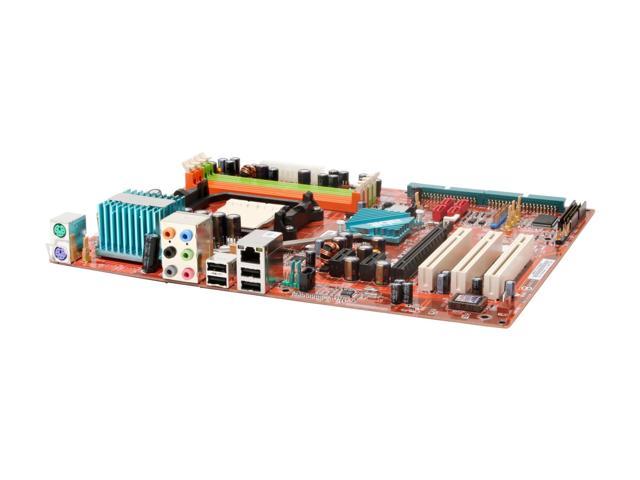 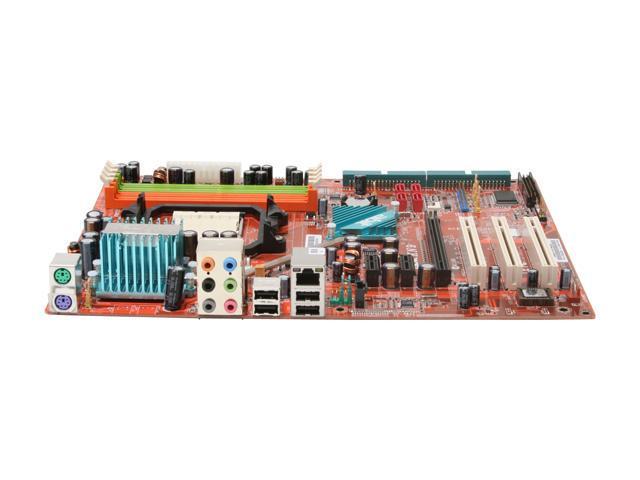 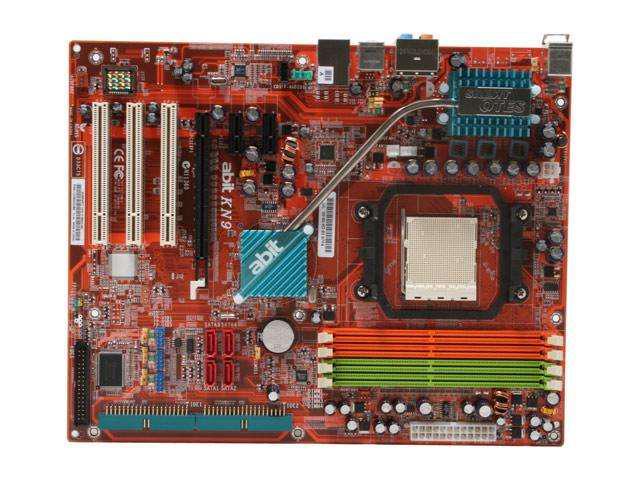 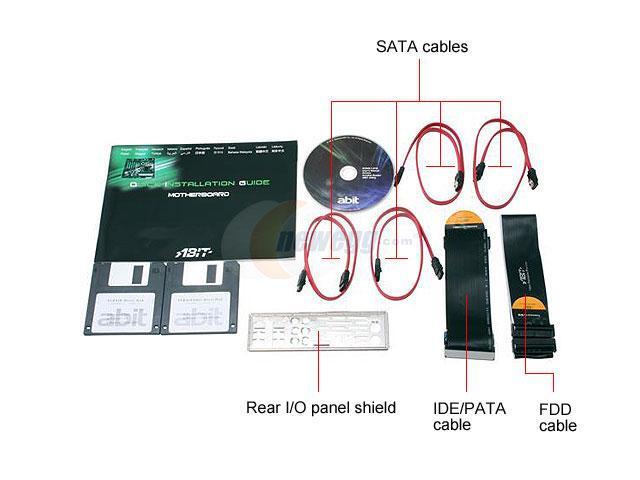 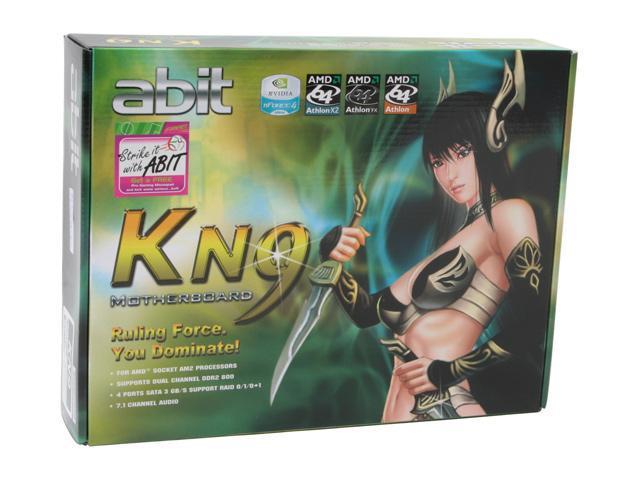 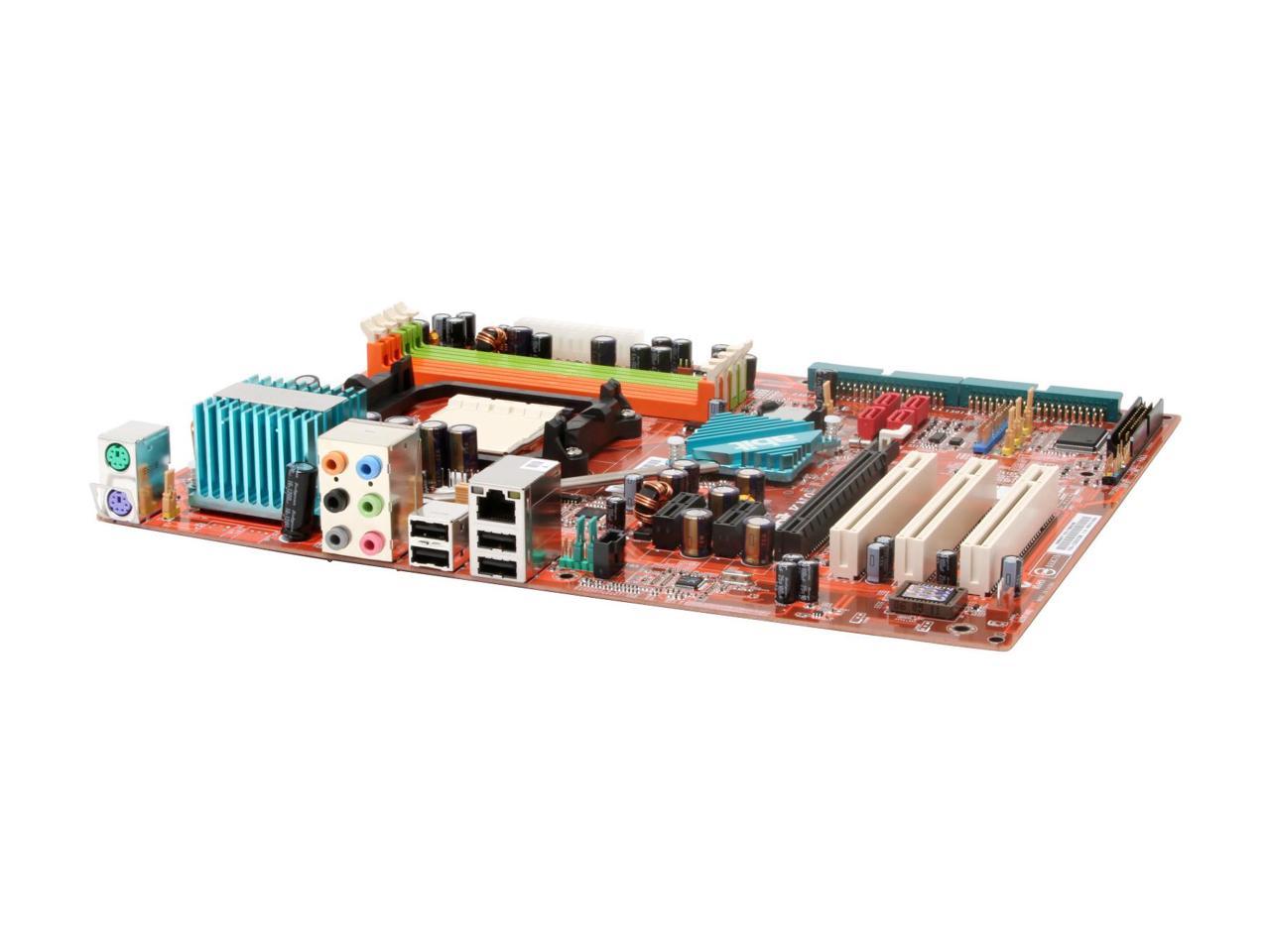 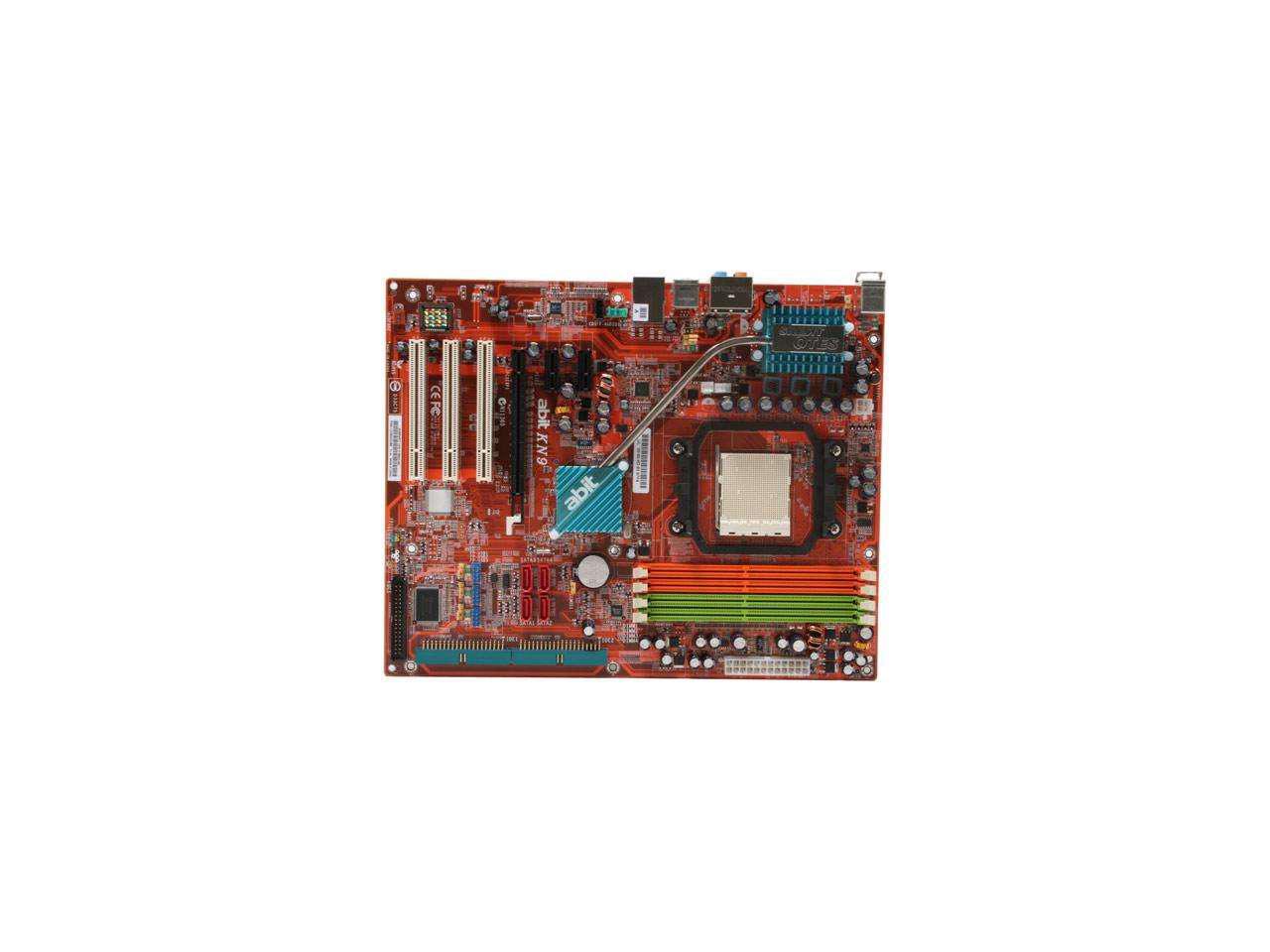 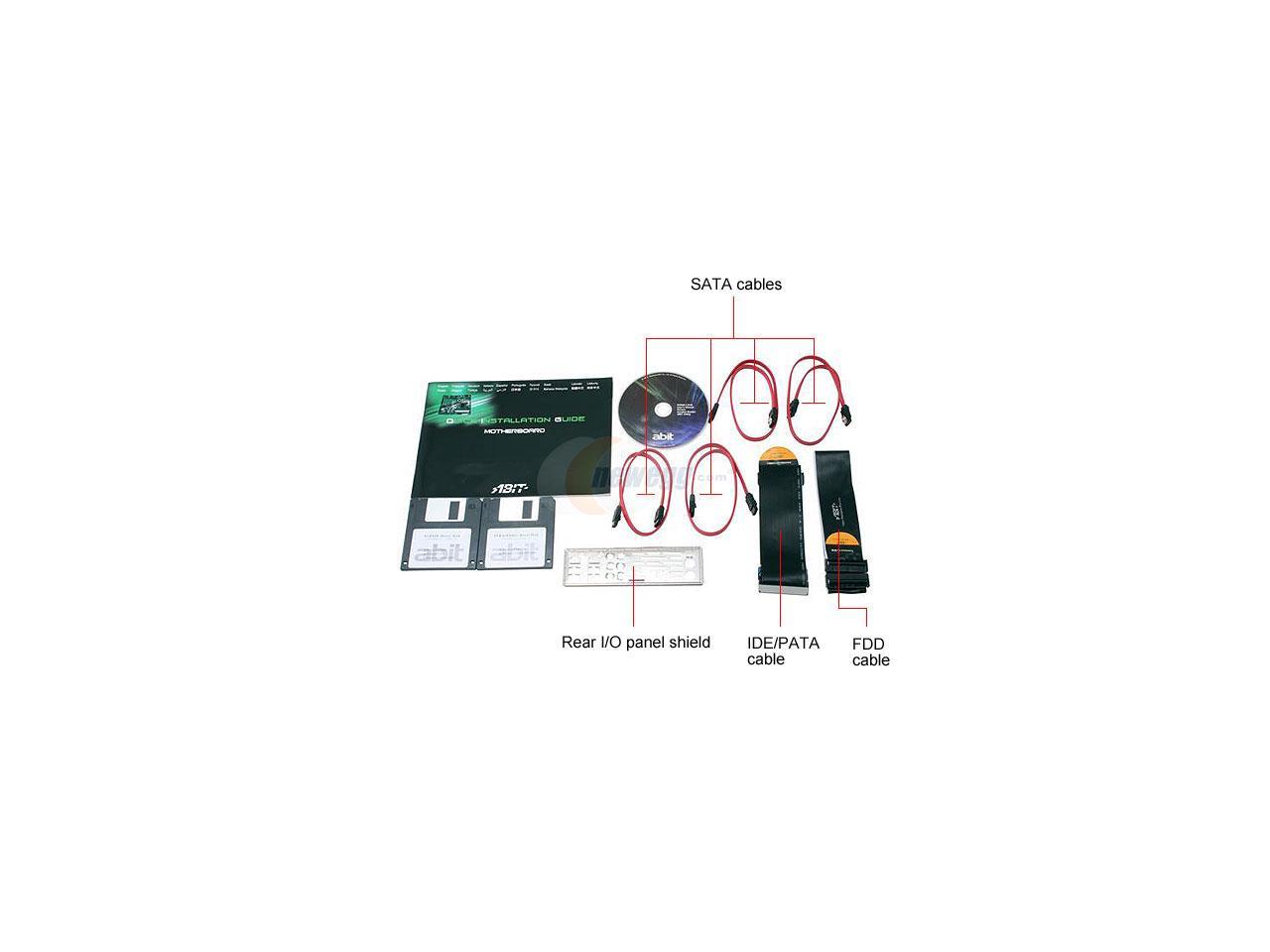 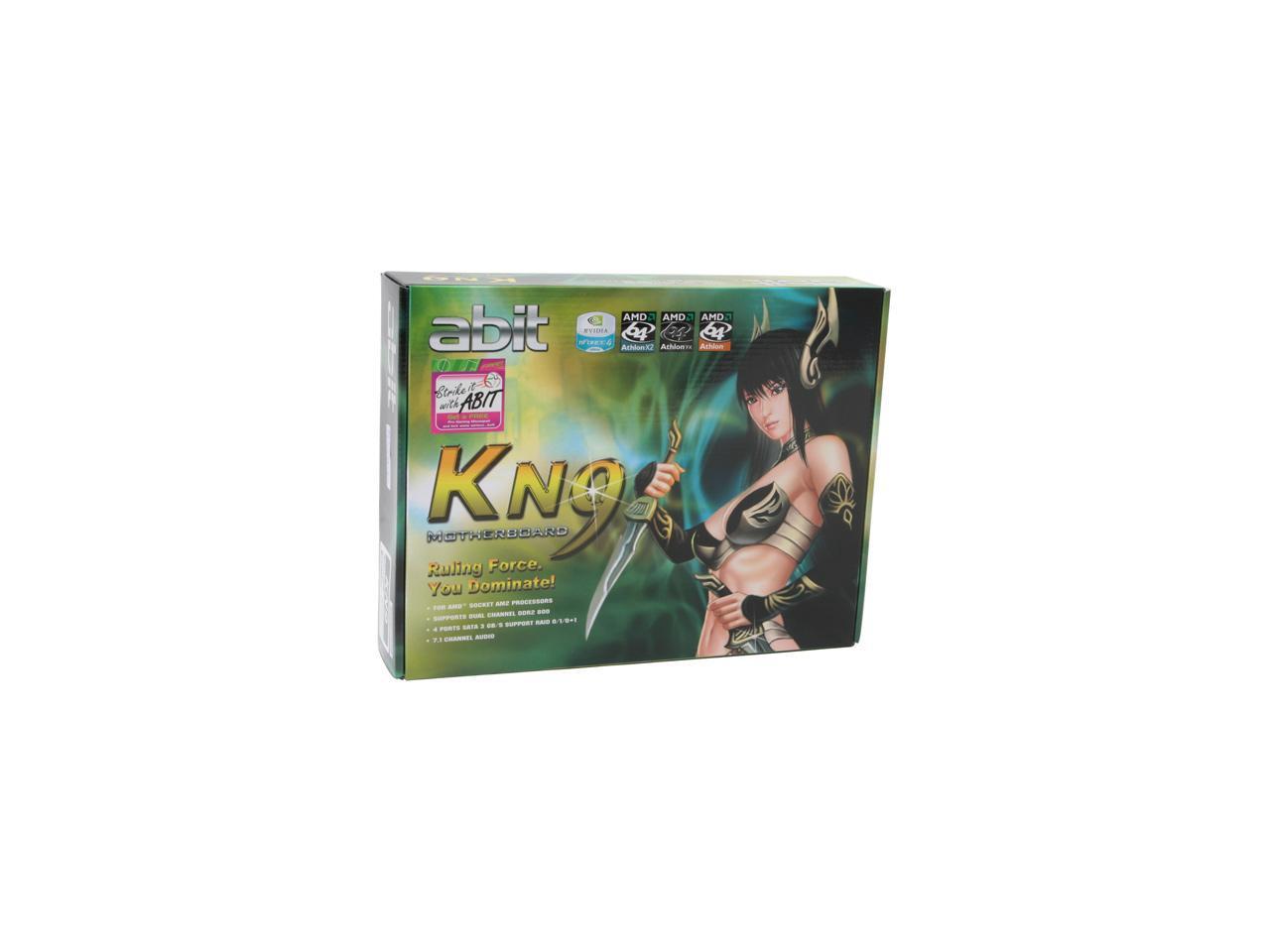 (89) Write a Review
OUT OF STOCK.
Overview
Specs
Reviews
A full-featured motherboard with plenty of power, the Abit KN9 is great motherboard for anyone needing to replace or upgrade their system. Equipped with an AMD socket AM2, suitable for Athlon 64 processors, including the X2 and FX series, the KN9 is more than capable of handling anything you may want to run. Using the Nvidia nForce 4 Ultra chipset the KN9 adds up to 8GB of DDR2 memory to give you powerful support for memory intensive applications.
It also includes a gigabit Ethernet port, 7.1 channel onboard sound, and 4 SATA ports. This versatile board supports RAID 0, 1, 0+1, and JBOD to allow you to manage multiple hard drives through those ports. You get multiple expansion slots, including one x16, and two x1 PCIe slots, plus an additional three PCI slots. Build a powerful system; the Abit KN9 is a perfect motherboard to use as a foundation.

Pros: I included this in my new rig since I used abit in my previous rig several years back and that computer has been rock solid. the construction is very solid and the architecture very pretty. good choice of mobos if you like to run open casket or have a seethru case. :) everything was very simple to hook up, plug and play and off you go. didn't have any confusion. integrated ethernet is convenient. integrated audio actually sounds pretty darn good to my ears, all things considered. everything was very easy to get going.

Cons: the nvidia network manager filewall deal that comes with this mobo is questionable. I was curious at the start, so I did, in fact, install the firewall software. I could have avoided a lot of frustration if I just passed. Most anything I downloaded, especially in the form of self extracting archives for larger files, just didn't work. the file would report being corrupt when I ran it, or it just would crash, or any number of other reasons for not working. I speculated bad memory and a number of other things. Even though I turned the firewall completely off earlier in my troubleshooting process, I eventually decided to try completely uninstalling it. what do you know -- that fixed EVERYTHING. that little rascal of a firewall was wreaking havoc even though it wasn't turned on. save yourself some trouble, you don't want to install this firewall, just leave it alone!

Overall Review: don't install the included nvidia firewall! get a real one!

Pros: It's easy to work on and install. Good manual and Value. After using beta bios it would work perfectly with my OCZ ddr2 800 ram.

Cons: Doesn't work with my OCZ ddr2800 platinum 2GB kit. It would not post at all. I had to call OCZ support to get it to work.

Overall Review: If you have OCZ ram, you have to up the voltage to 2.20V. I had to buy a Kingston ddr2533 to have it to post. Like many others, if you have OCZ ram you might not be able to have it post at all with the current bios. With beta bios, life is good again.

Pros: Easy to set up, all the features that I need. No fancy ones I don't. Most of the low reviewers failed to pay attention to the manual that clearly states a 3 pin CPU fan connector will fit in the labeled CPU fan plug, it just ALLOWS a 4 pin fan as well, in fact there's even the guide rail for the 3 pin one so you can't screw up, so ignore the misinformed. This works fine with 3 pin fans.

Cons: No firewire but my soundcard has that anyway.

Overall Review: My AMD 5200+ works fine in this MB even though it's not listed in supported chips. Worked with Crucial DDR2 800 XMS2.

Cons: SATA Connectors right behind PCIe slot hard to get to when video card installed. Also, just a preference of mine, I'd rather it had the PCie x1 slots on the other side of the PCIe x16 slot, since I have more uses for regular PCI slots and I can only use two of them.

Overall Review: This motherboard replaced a KV8-MAX3, one of Abit's finest boards ever, IMO. I paired this up with a 65W Athlon X2 Windsor 3800+ and 2GB Crucial 10th Anniversary DDR2 667 (I did bump up the voltage on the DDR2 to 2.2v after reading that recommendation under these reviews and the Crucial reviews). It POSTed after I cleared the CMOS once and it has been running great ever since. This mobo has made my first jump to a dual-core cpu a pleasant one. Last note: I use this mobo for RAID mirroring and I have been very pleased with the stability of nVidia RAID.

Pros: This Motherboard is great not because it is reach on features, but because it doesn't have features I don't need. I mean there is no on-board video that I've never used. Also MoBo doesn't have second PCI-E and thereafter it is not a SLI (that I don't need either) It makes motherboard less expensive and layout more transparent Moreover,I like fan-less ( cool'n'quiet) design of MoBo Video card I bought has the same feature Manuals are very good. BIOS is as usual.

Cons: manuals do not explain that connector for front mic/audio has 2 jumpers which suppose to be removed if you use connector

Overall Review: I want to see more motherboards like this one

Pros: very good board for the price. Runs great and its not that loud. Ive had problems overclocking but i think i just need a different heatsink. Runs most games great but it could just be my videocard.

Cons: overclocking the cpu, i get the blue screen of death!

Cons: Installing and enabling nVidia firewall caused blue screens of death. Had to uninstall the firewall software to stop BSODs.

Pros: Everything was pretty much straightforward in installation.

Cons: realtek. btw, you'll need to download drivers from realtek.com.tw or whatever if you upgraded to vista

Overall Review: if you still use the old ide drives, they were kind of a pain to attach to if you have your disk drives already in the case.