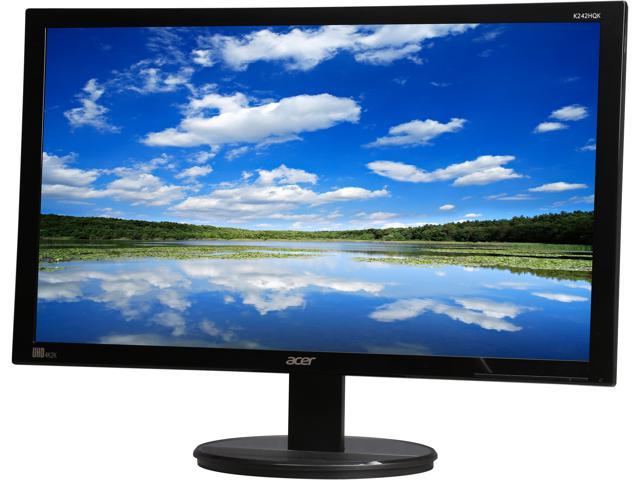 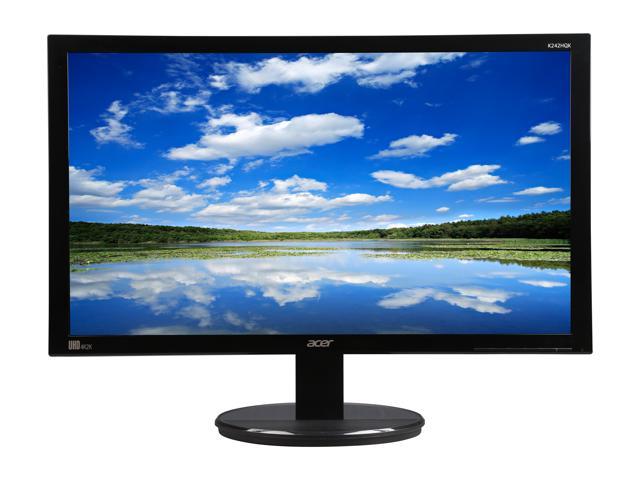 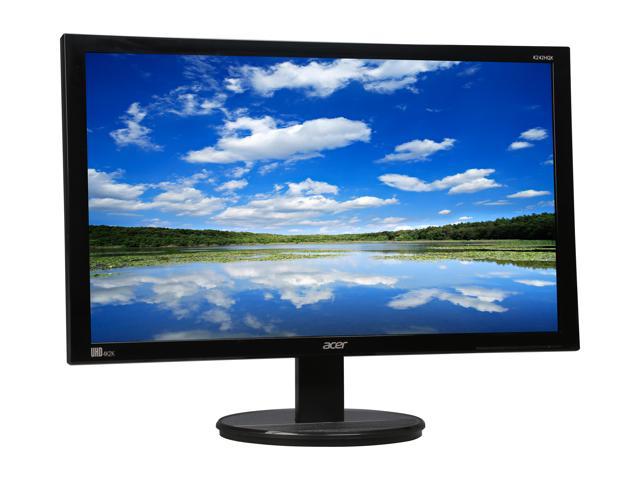 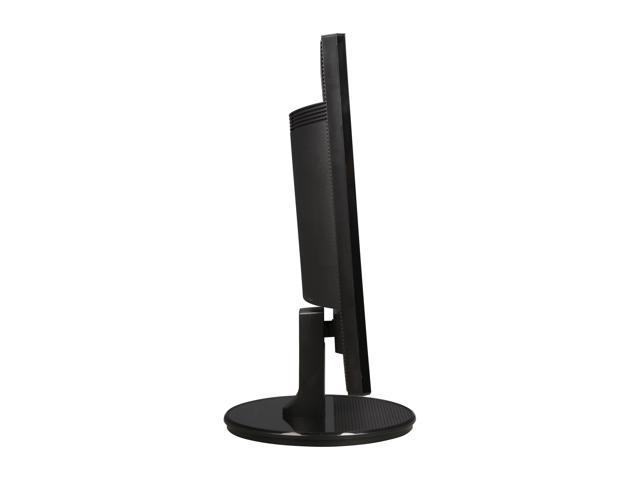 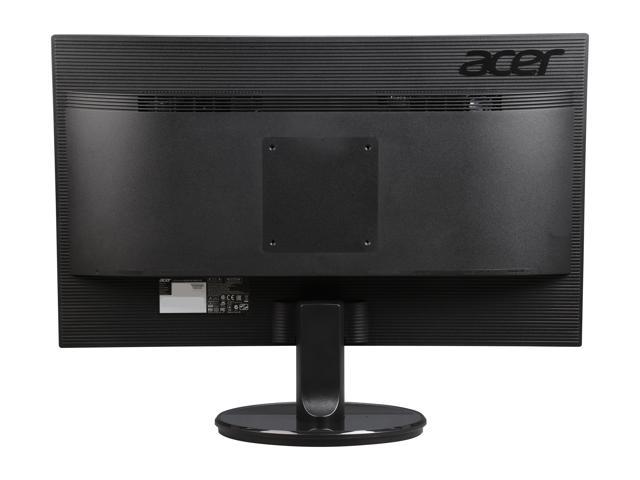 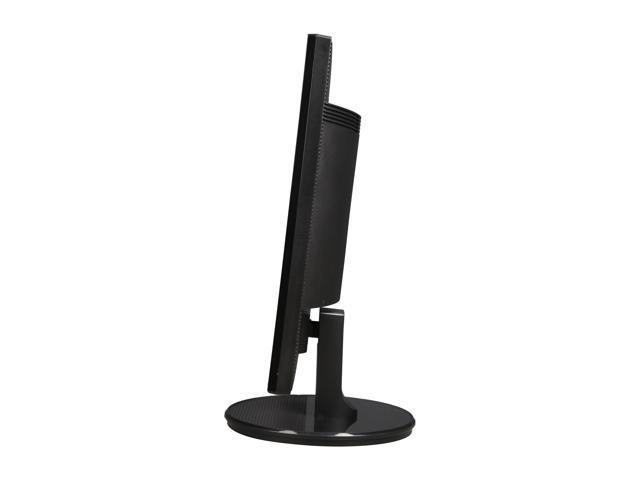 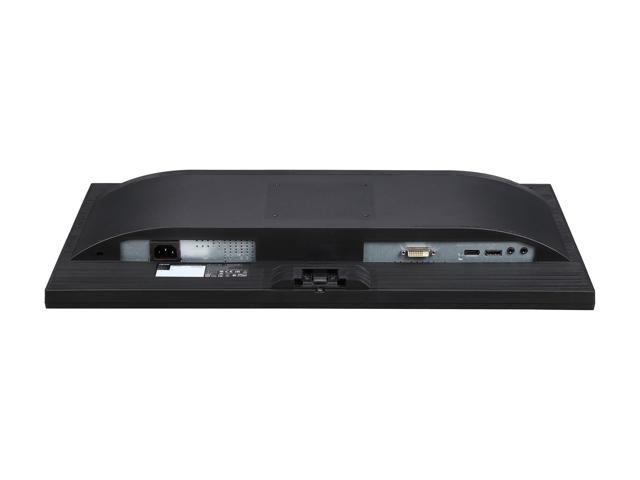 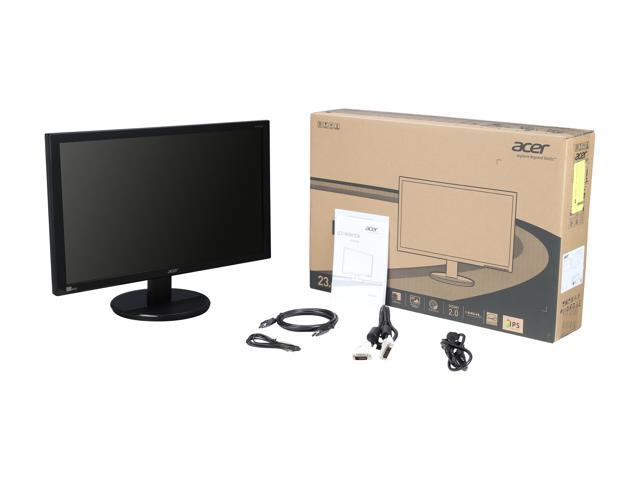 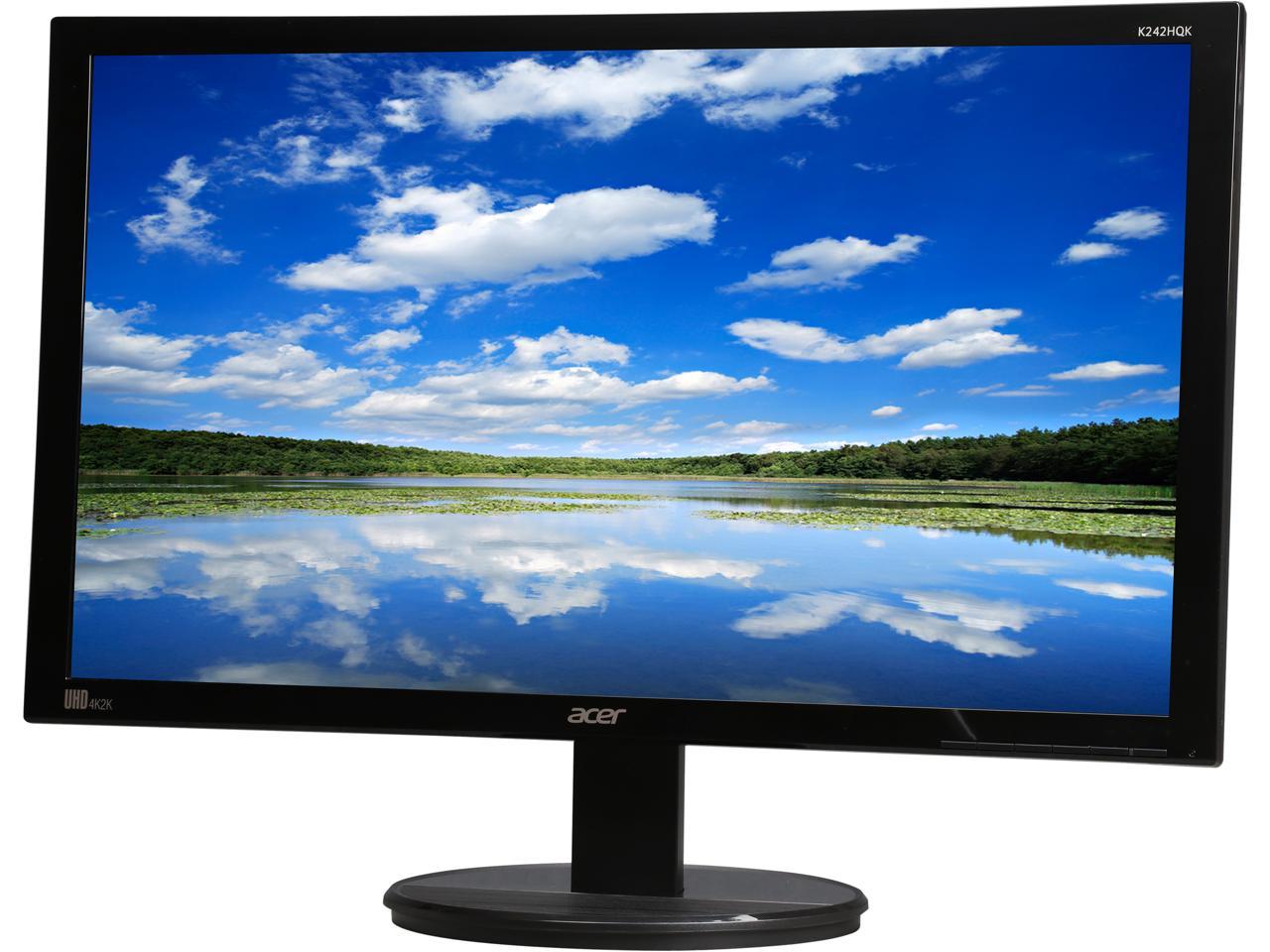 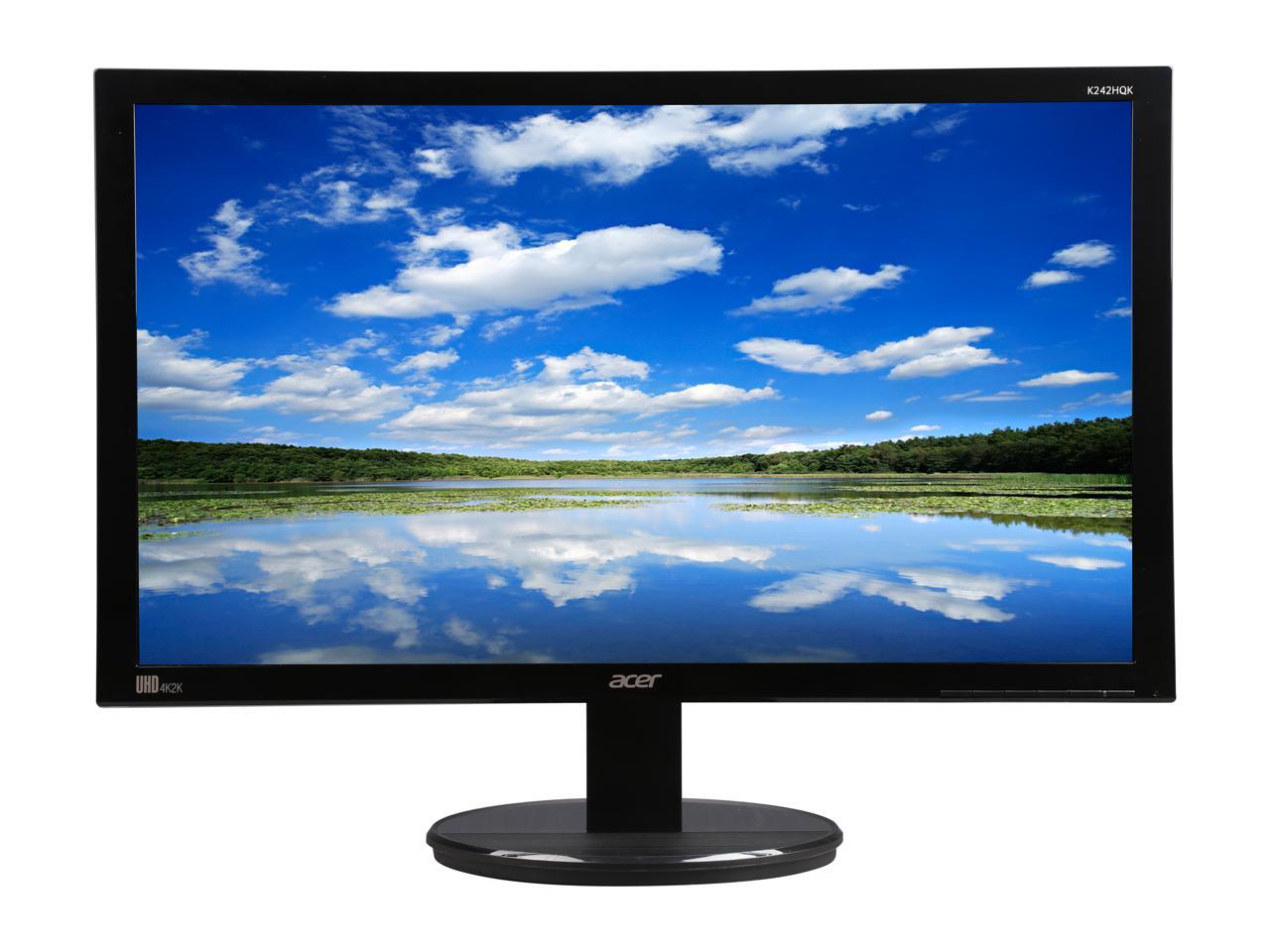 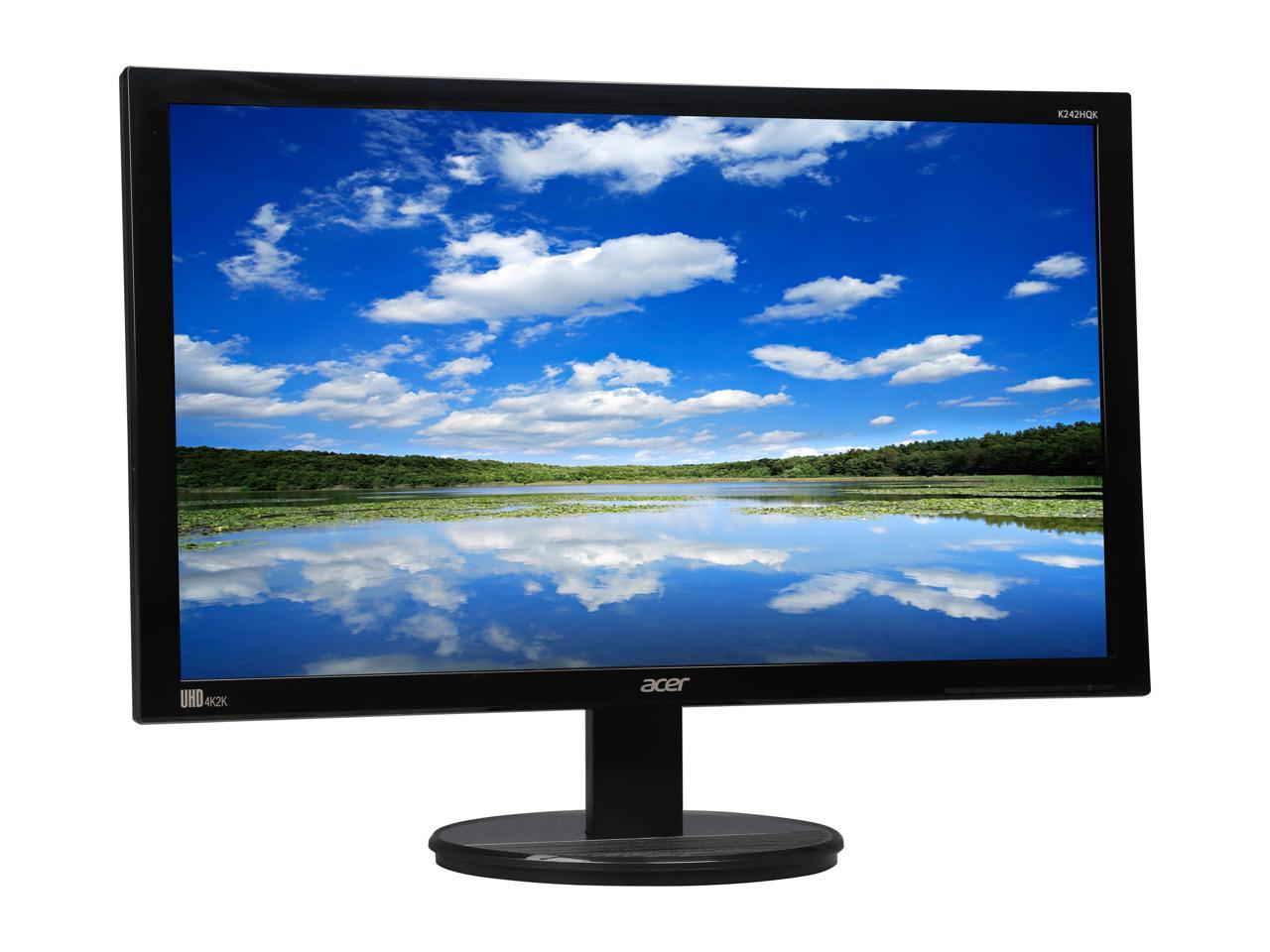 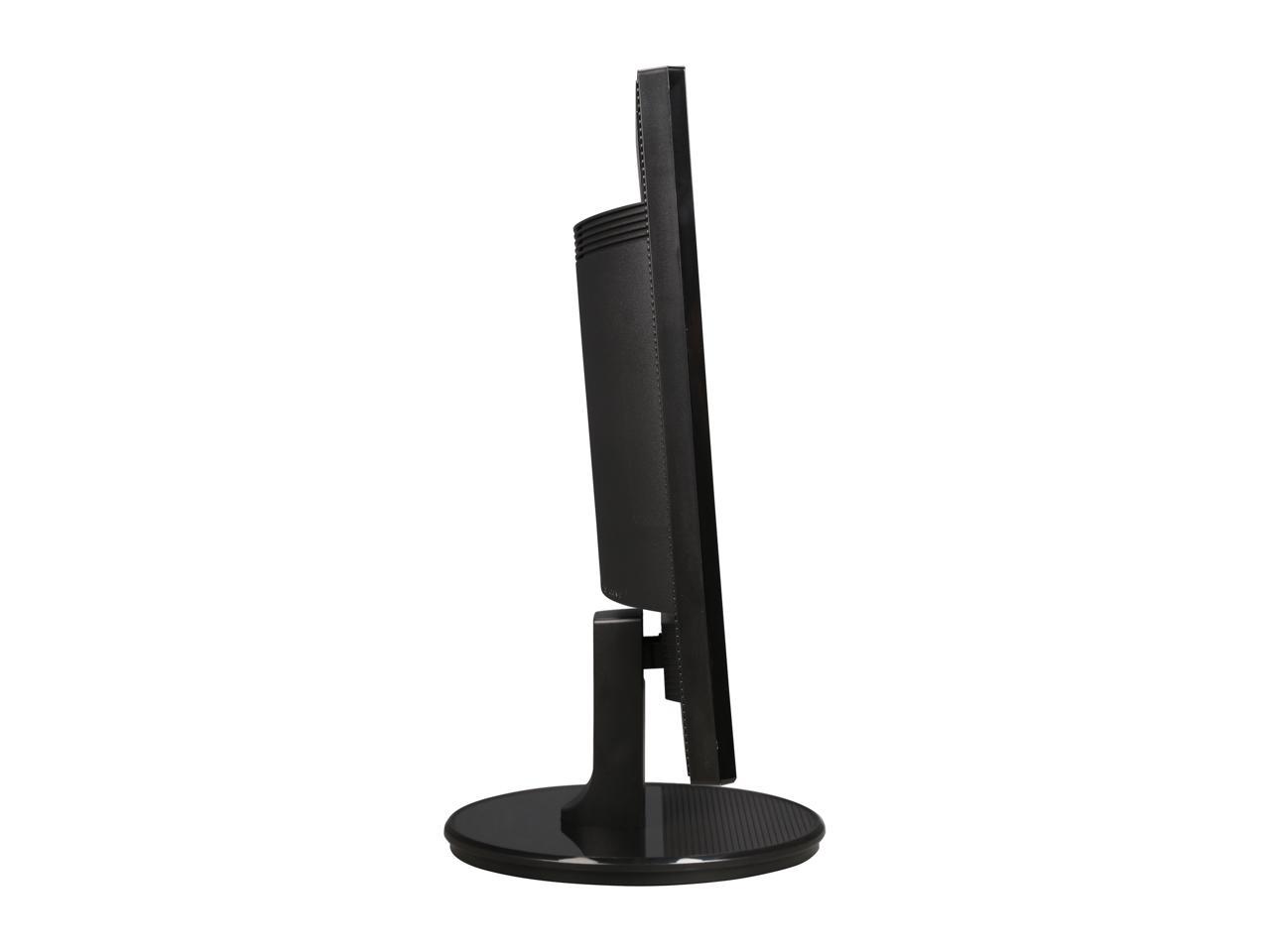 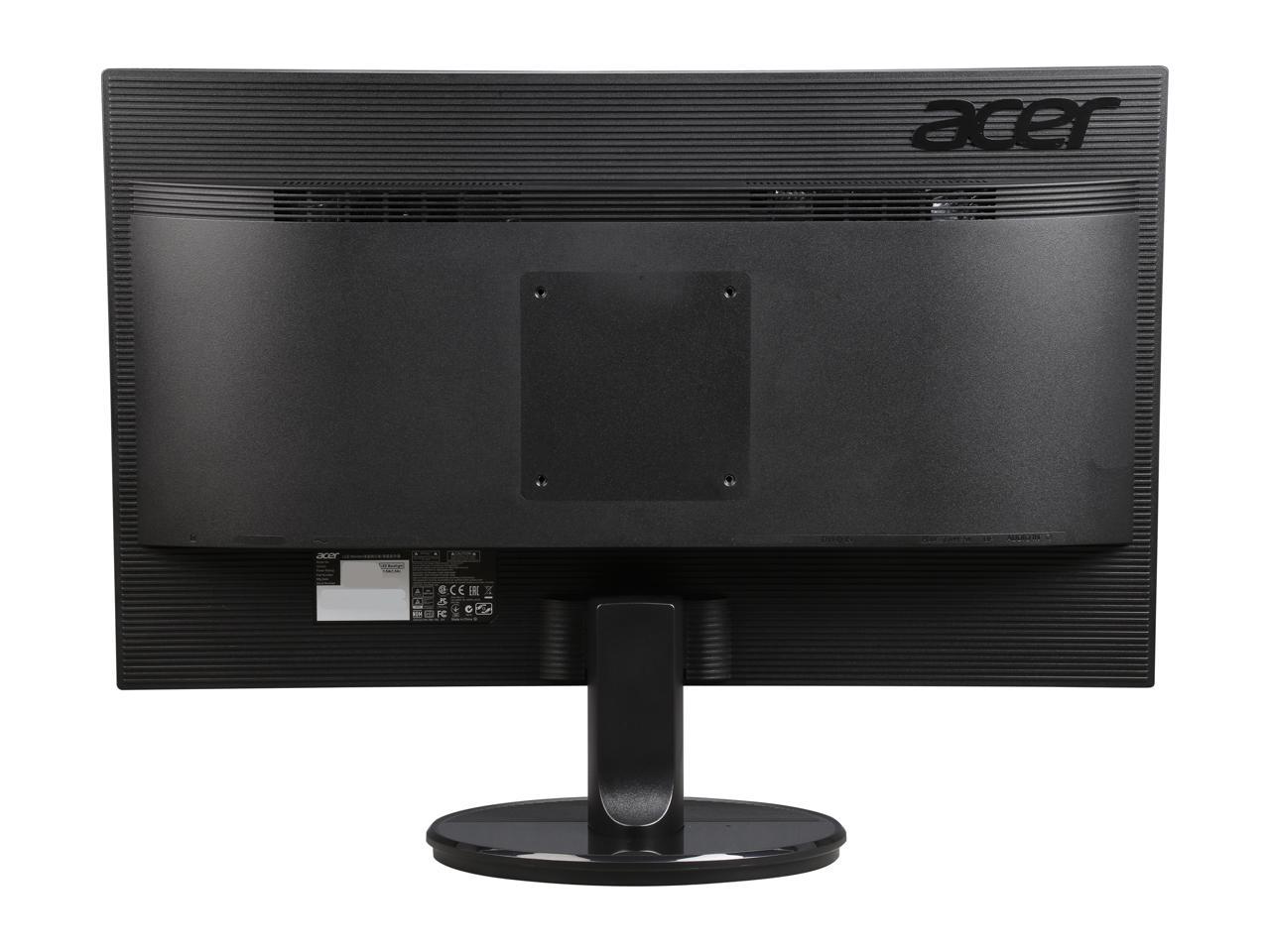 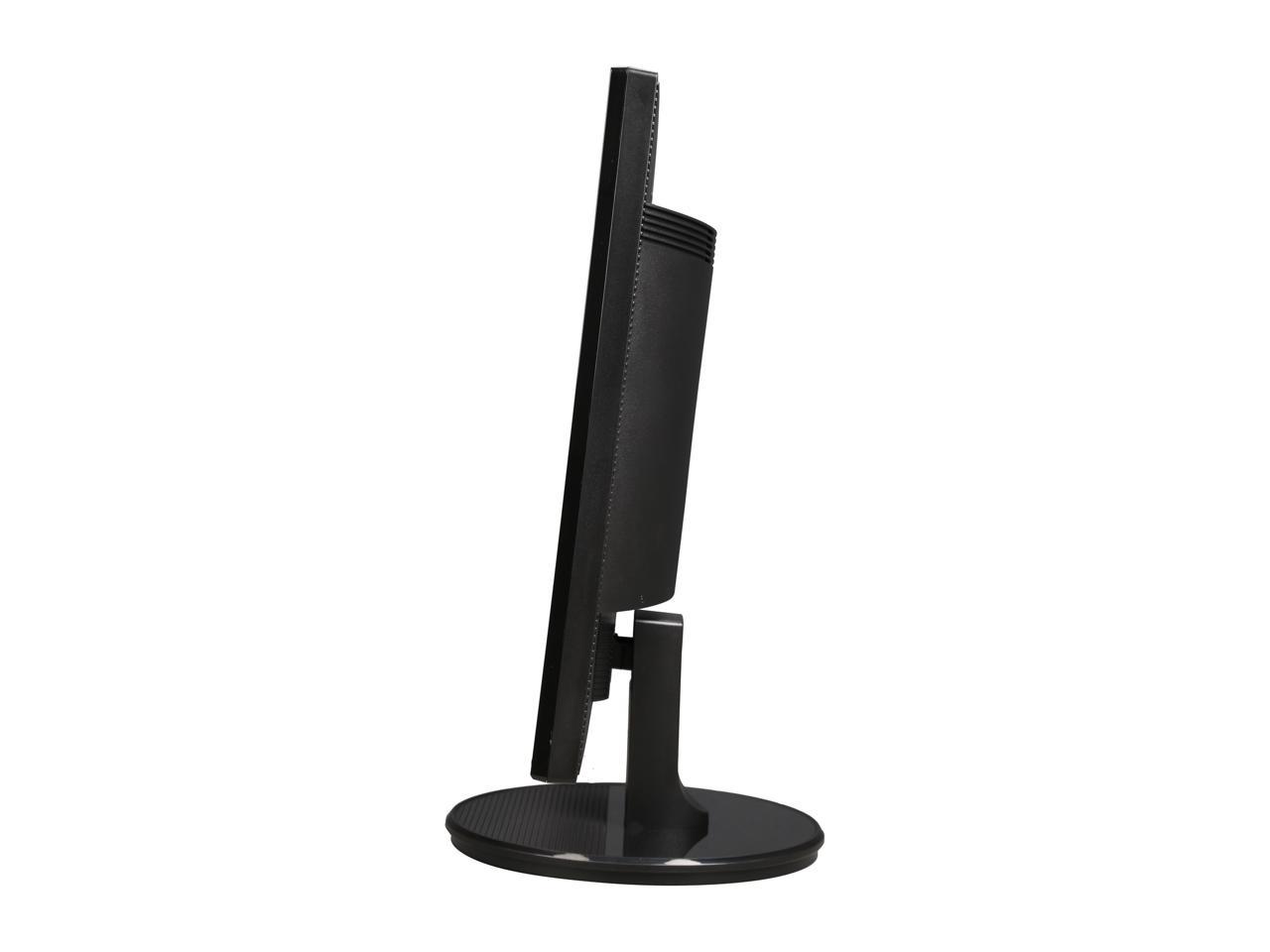 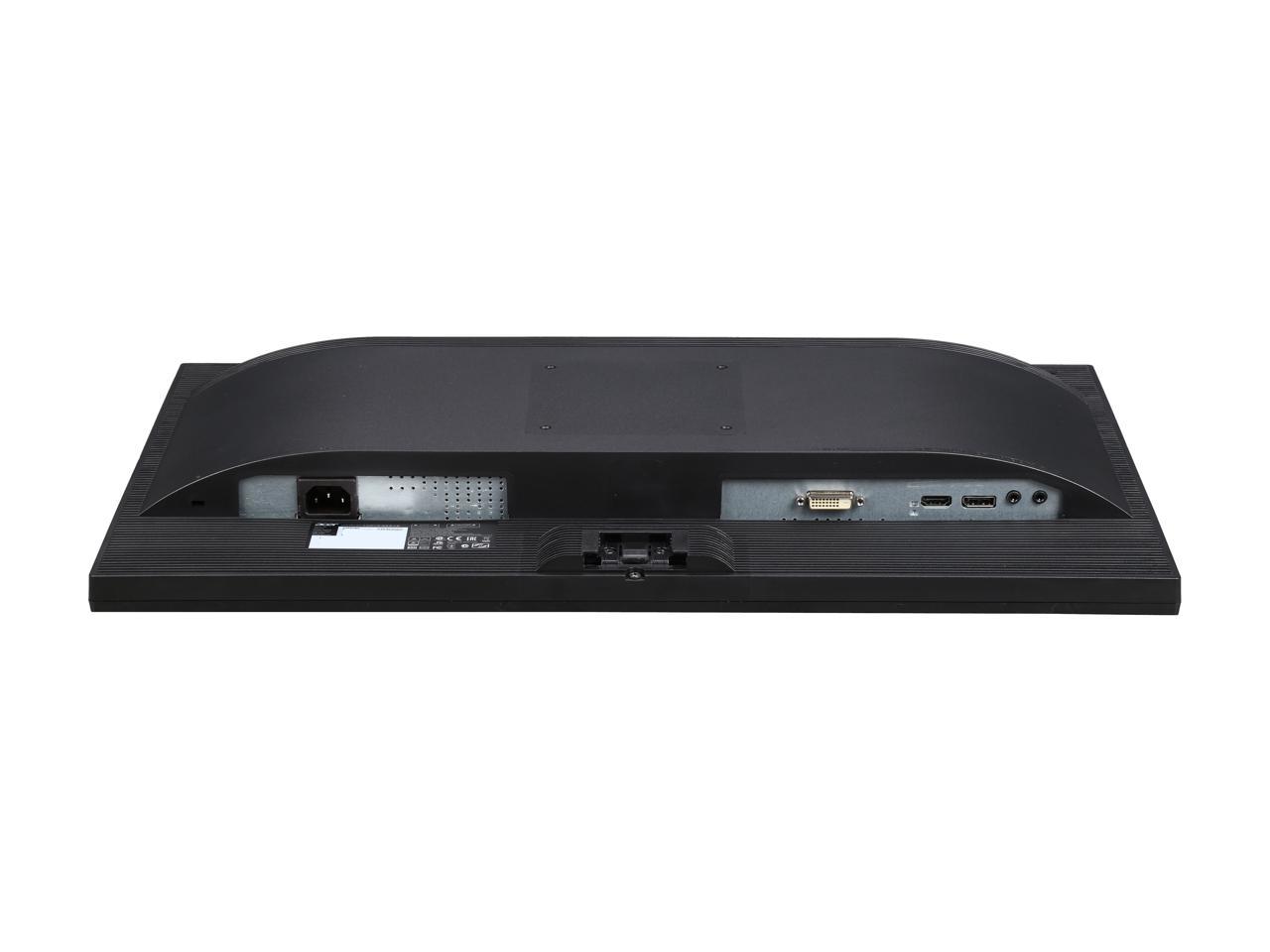 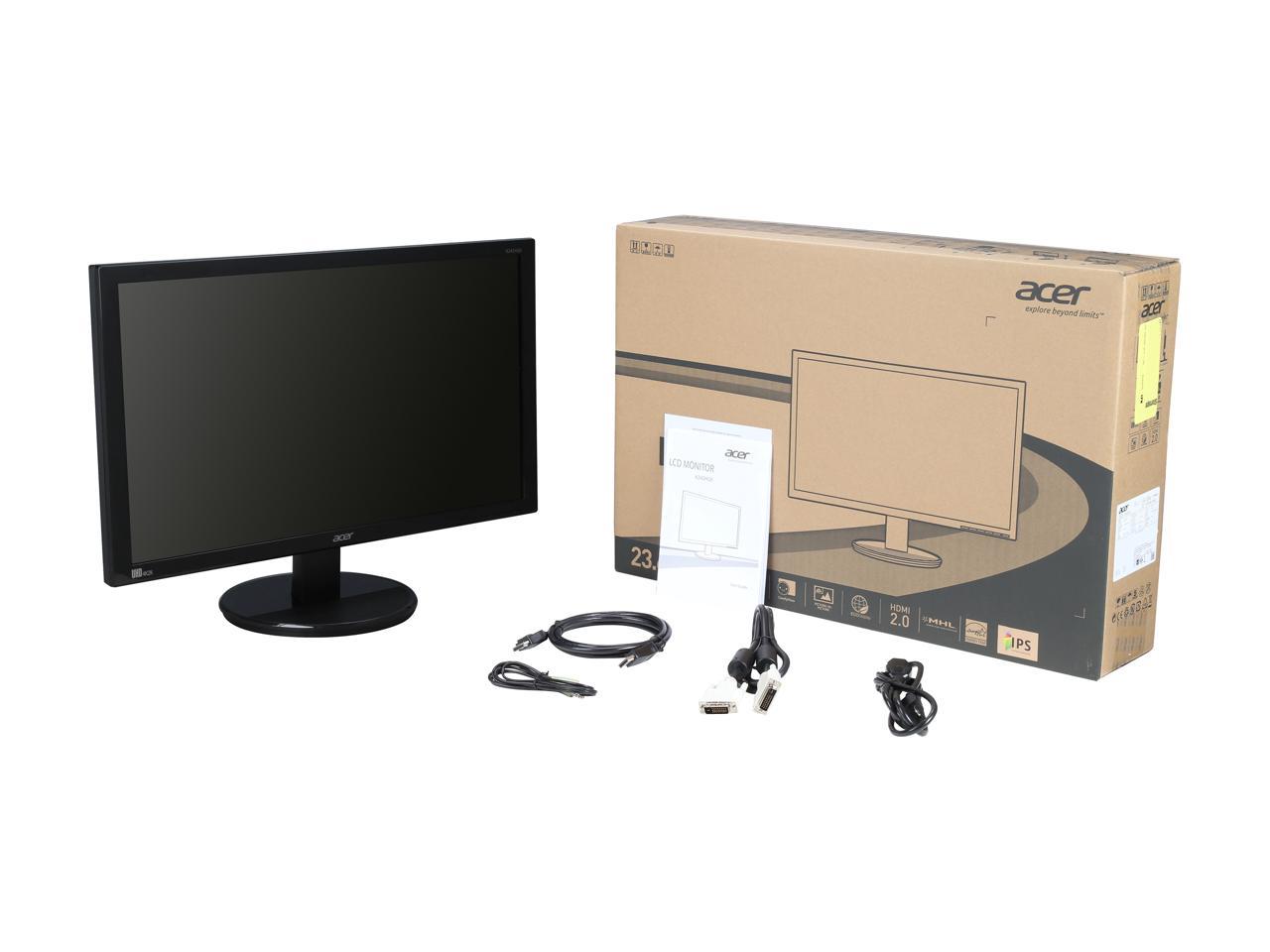 Take your everyday work and play to the next level with the Acer K242HQKbmjdp 4K LCD monitor. This 23.6" monitor features 3840 x 2160 native resolution - four times the resolution of Full HD, and IPS panel technology for amazing 4K brilliance on a wide viewing angle up to 178° (H) / 178° (V). With 100,000,000:1 contrast ratio and 4ms (GTG) response time, everything on the screen will look fantastic - beautiful stills and impressive videos with smooth motion and minimized blur even in fast-paced scene. The built-in speakers produce decent stereo sound, and the MHL support allows easy content sharing with compatible mobile devices. Plus, a classic frame design with slim bezels allows it to easily fit home or office environments.

Cons: Unfortunately, one of my monitors had a crazy backlight bleed in the bottom left corner. When I tapped that corner to see if I could "snap" the panel back, it made a clicking noise suggesting the panel wasn't attached correctly in that corner. I tried to ignore it, but it was quite obvious with any black or dark colors in that corner so I decided to RMA it. Happy to report replacement has no backlight bleed.<br><br>Lots of antiglare coating. I might be in the minority here, but I actually prefer gloss coating due to its deep blacks.<br><br>When these are powered on, it will autocycle through all 3 available inputs to find the current one. This is a pain if you're using DisplayPort since this is the last input it scans. This means there's a slight delay while it cycles, only about ~5 seconds. Not enough to be a pain, but some people might find it annoying.

Overall Review: Amazing 4K picture and detail. I still think this is one of the most affordable 4K monitors on the market right now. Although it lacks the bells and whistles some other monitors have (such as USB hubs, headphone ports, etc.), the amount you pay for what you get makes up for it.<br><br>Many people would look down on its smaller size (23.6" vs 28"), but I actually prefer monitors <28" due to pixel density: the larger your monitor gets, the smaller amount of pixels you have per area. The difference is noticeable immediately if you put one of these monitors right next to a 28" monitor. The smaller one will always appear more crisp. Despite its higher pixel density, I've never had a problem reading text as some other users have complained in other 23.6" monitors. Another reason I prefer a smaller monitor is desk space. <br><br>Windows 10 scales nicely with 4K resolutions. Besides individual programs that don't automatically scale, 99% of Windows 10 scales automatically, so you never need to worry about text or programs being too small to see. Unfortunately, Windows 7 doesn't play nicely with 4K without some tweaking, so be aware this.

Pros: Have experienced some issues with the display port cable included with this monitor.Sometimes it will not display anything on first boot and requires a reset. Other times AMD Control Center will tell me that it has detected an issue with the connection between my video card and monitor. Re-seating the cable fixes this, but it is probably worth the money to buy a known VESA DP 1.2 compliant cable.

Pros: Great panel colors, IPS, 4k. This panel is a great, cheap 4k monitor, and is quite impressive. I was using an AHVA 1080p monitor from benq, and the colors are a bit better imo on this Acer, and being 4k the detail is that much higher. Gaming is noticeably better as well, and the details in games is that much better. This monitor removed the extra bells and whistles to cut down price, and i'm very impressed with how cheap this thing was. 350 plus tax which came out to around $380.

Cons: Ok now for the cons. Most of which aren't really cons, since you get what you pay for. Glossy bezel (not that big of a deal for me). No usb hub, again not a big deal for me. Basic stand that angles up, and down.

Overall Review: For me this monitor is superb, but I wouldn't get it unless the main use is for gaming. Though watching movies, and other content looks great, there isn't enough 4k content like movies, shows, etc to justify the purchase. Netflix, and prime video only have 4k on smart TVs atm, and it may take a while for them to amass a decent collection of 4k content. Also keep in mind gaming at 4k requires some pretty beefy hardware. and you'll need something like 2 r9 290xs, which I picked up used to drive games at 4k. The second thing to note is if you plan on using your old 1080p monitor as a second monitor keep in mind scaling will look a bit off. Web browsing, and what not looks fine, but sometimes when opening things like task manager, or right clicking on the desktop it will be really large on the 1080p monitor. Also things like the windows explorer scale perfect on both monitors, so it's not too bad imo, and is definitely workable. This is just a flaw in windows that can't be avoided. Last i'm just going to say most apps that I use scale perfect. In fact the only one that scales poorly is Origin which is really small, and hard to read, but it's ok for launching games, and I don't really send messages through origin. Also the Steam overlay UI scales poorly, and is really small and hard to read, but if you alt tab it's fine. All together very happy with the monitor, and the gripes that I do have is mostly the fault of windows 8.1, maybe they'll fix it in windows 10, who knows.

Cons: There is a bit of backlight bleed off the bottom left side, but it's not enough to take away from having an inexpensive 4k monitor.

Cons: First unit i bought had a dead pixel in the middle left, and one in the middle right of the screen, and some really uneven IPS glow creeping out of one corner. so I RMA'd it no problem, Replacement unit has only one dead pixel, in the dead center of the screen. A 4K at this price point I could accept maybe one dead pixel way off to one corner, but not dead center. I understand it may be fallacy to expect perfection from such a cheap piece but it's still a lot of money.

Overall Review: Other reviews said it was flimsy, I can't say I agree + I'm using a dual mount so I can't comment on the quality of the stand. +Used an Acer for 9 years and loved it before this, I'm kinda turned off now ++Other Other thought, I have premier and originally ordered with 3 day shipping however the replacement was sent standard(4-7) so I ended up having to wait an extra weekend; would have gladly paid extra for a expedite if given the option. just a heads up I guess

Pros: What can I really say, it's a 4K monitor, and has wonderful color and clarity.

Cons: Sound is less than stellar, but it is a monitor after all. Didn't buy it for the built in speakers. Plugged our sound system into it and have it running through an EQ, so all is good at the end of the day.

Overall Review: Had to RMA first one I got due to bad backlight bleed in lower left corner. Newegg was very quick with processing the RMA and getting the replacement shipped to me.

Pros: No dead pixels, came with all cables needed

Cons: There is ghosting if you pay real close attention but if you are not looking for it you won't notice. Maybe there will be a firmware update to take care of it. I am using my display port on my XFX 290X video card and it does have some problems with display resolutions and I end up with a black screen. Not sure if its my card drivers or display issues.

Overall Review: I would not purchase this again but I also don't know if other low price 4K monitors have these issues to.