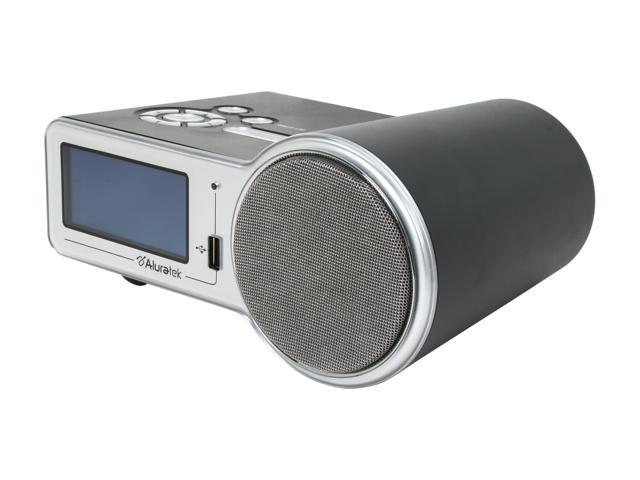 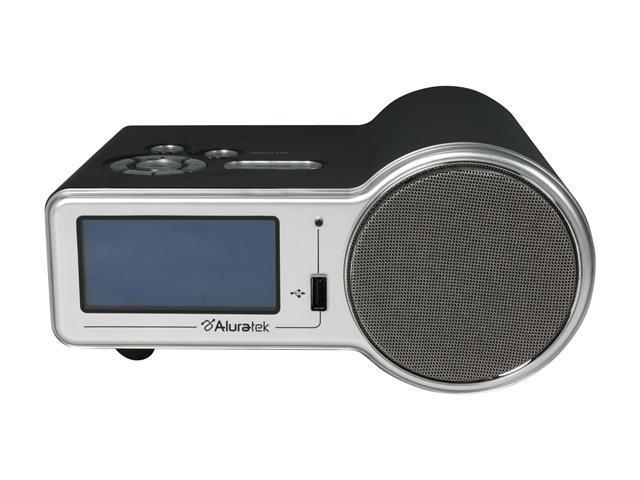 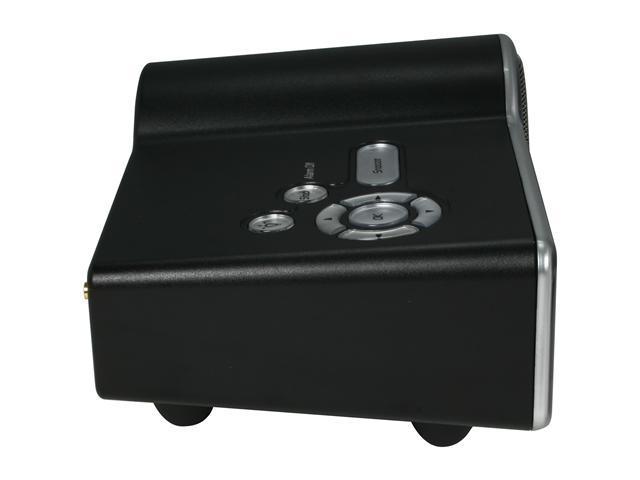 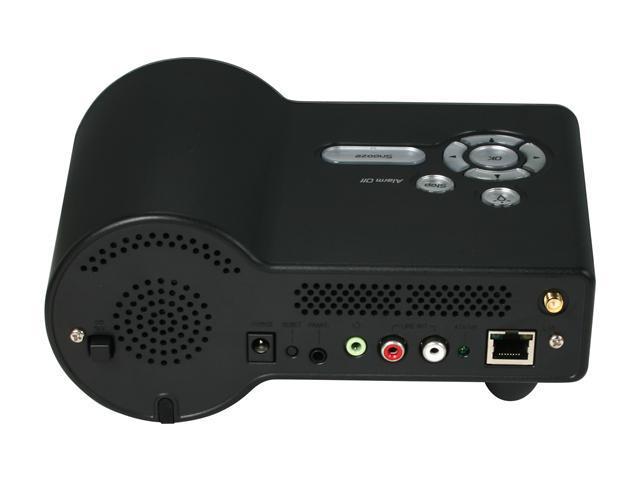 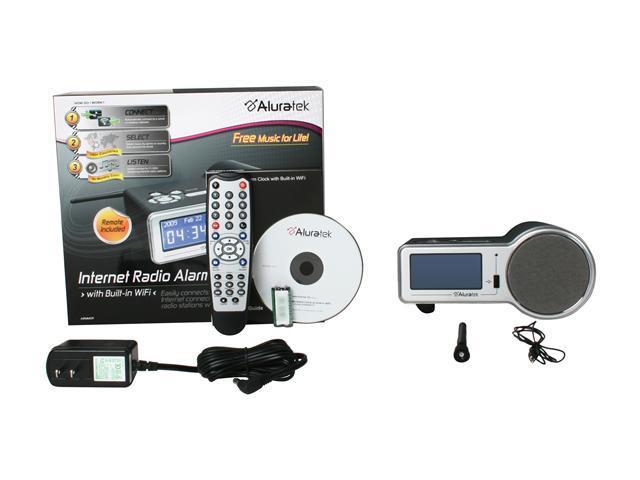 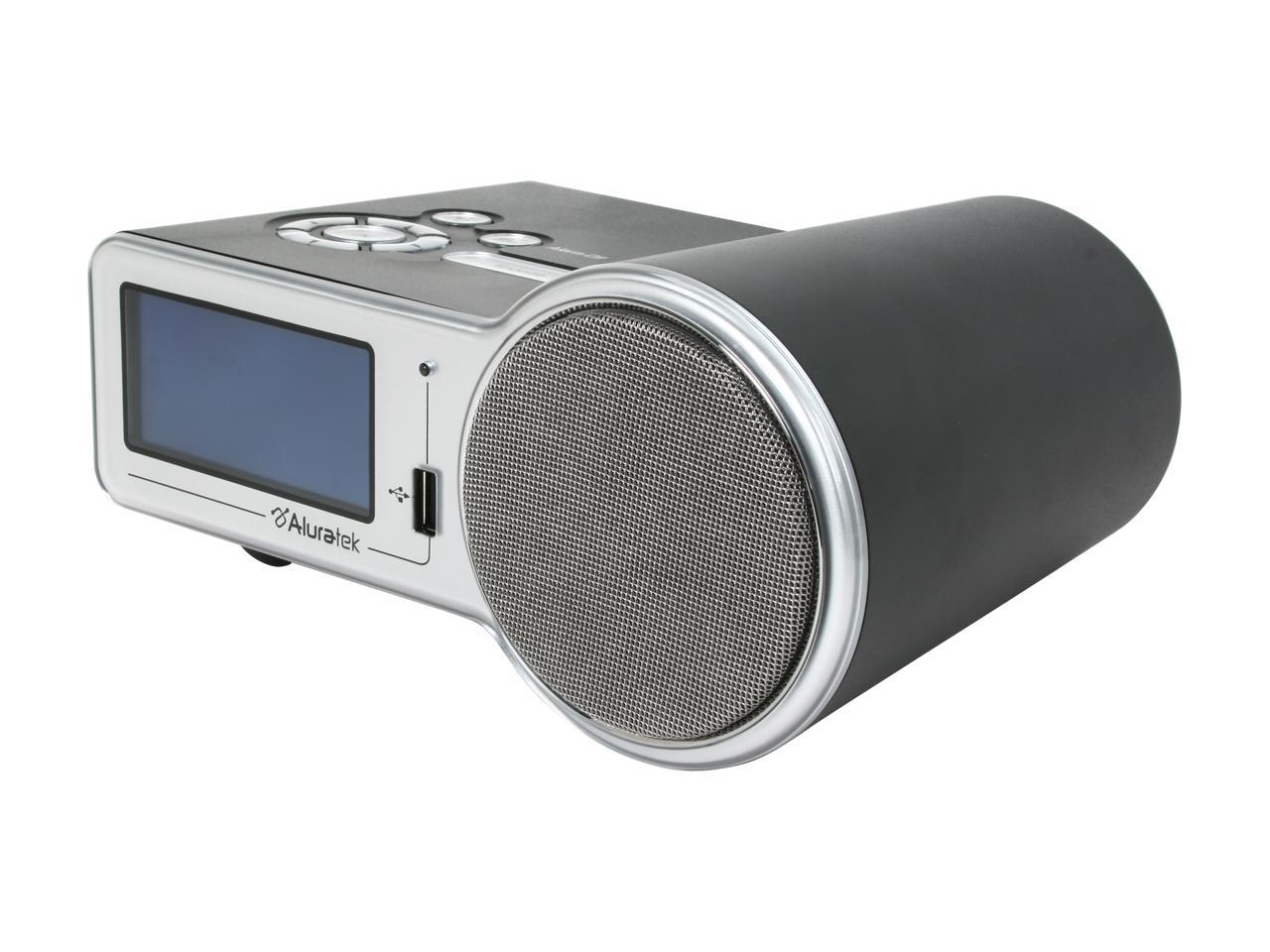 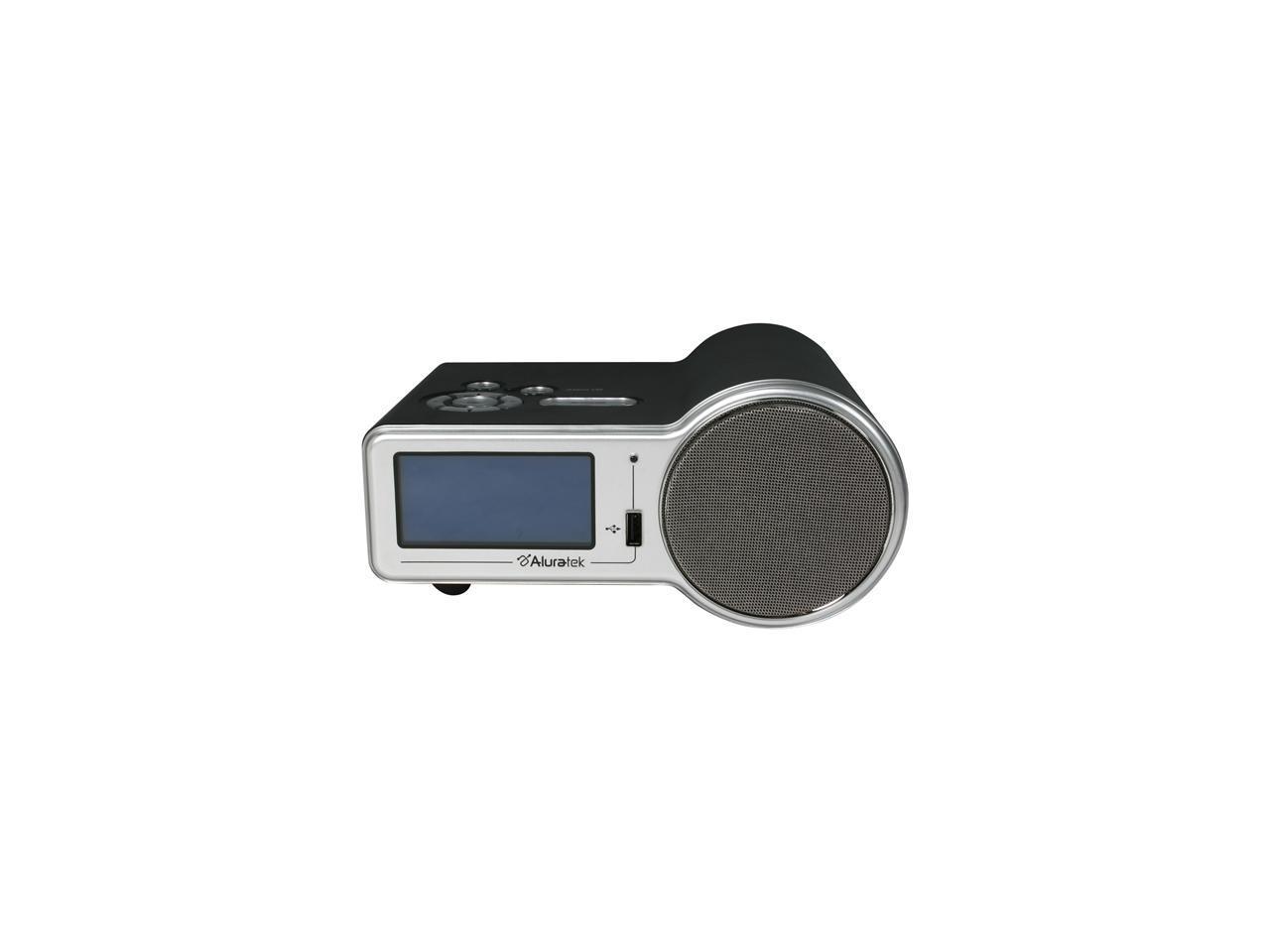 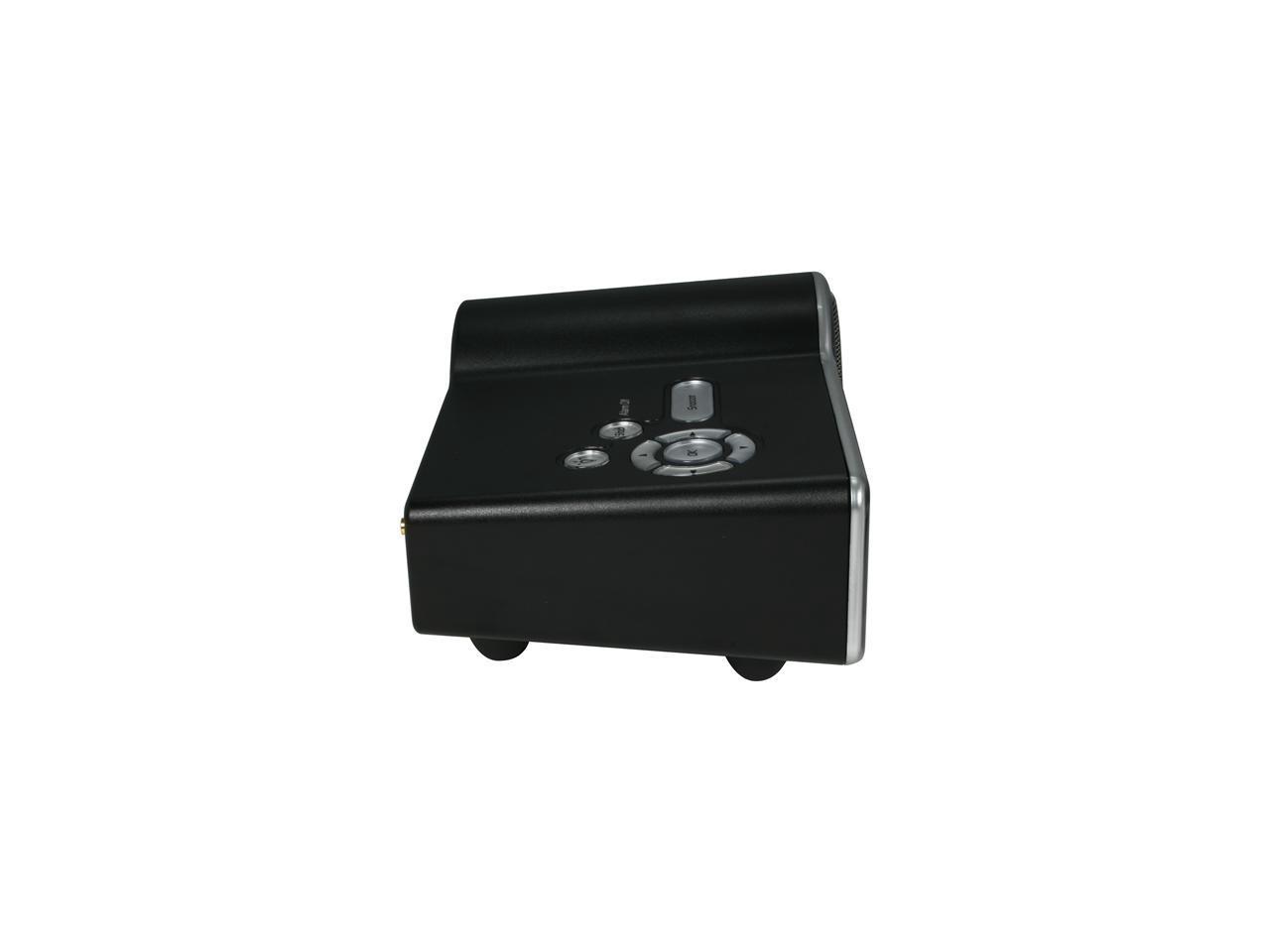 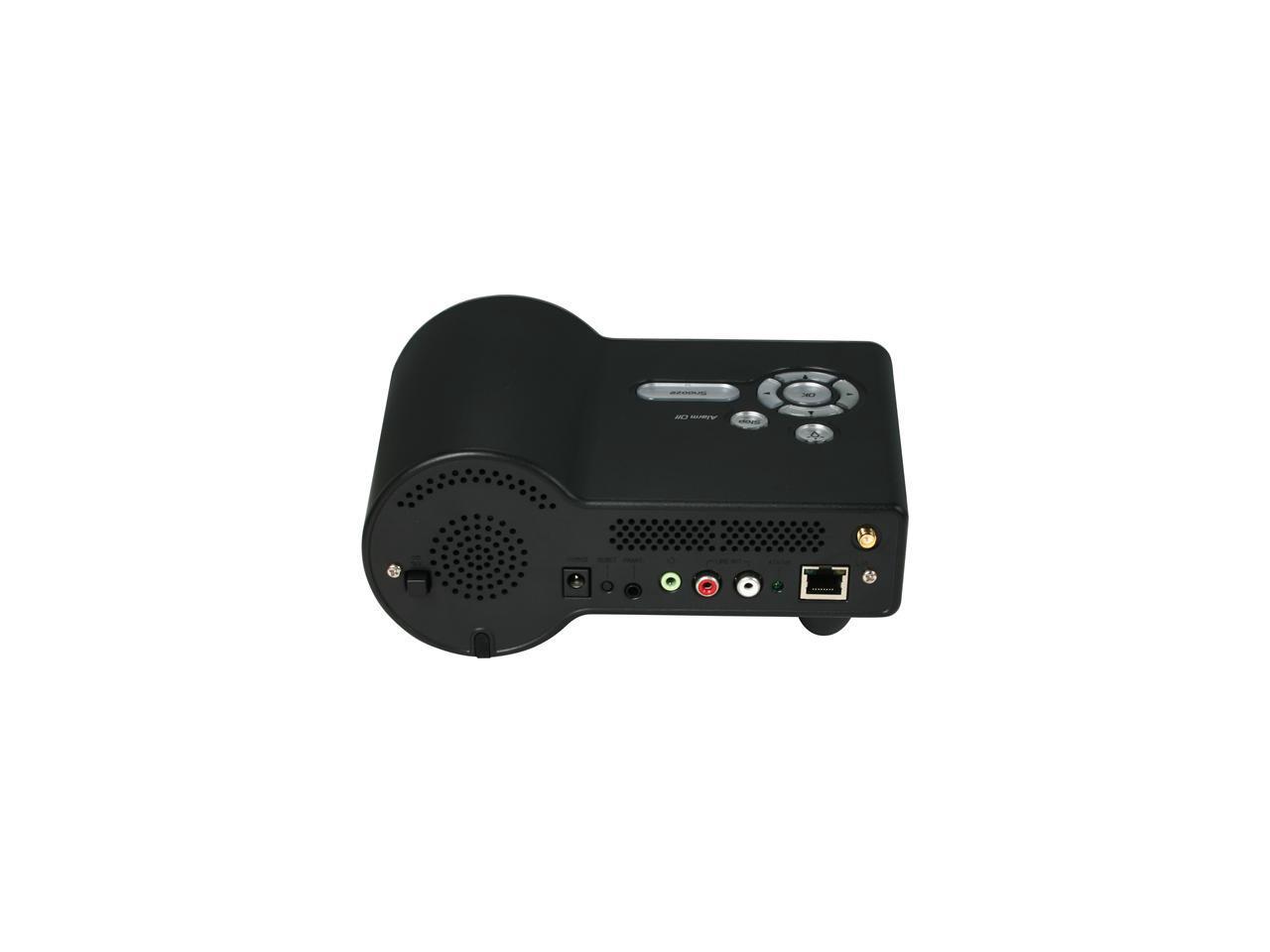 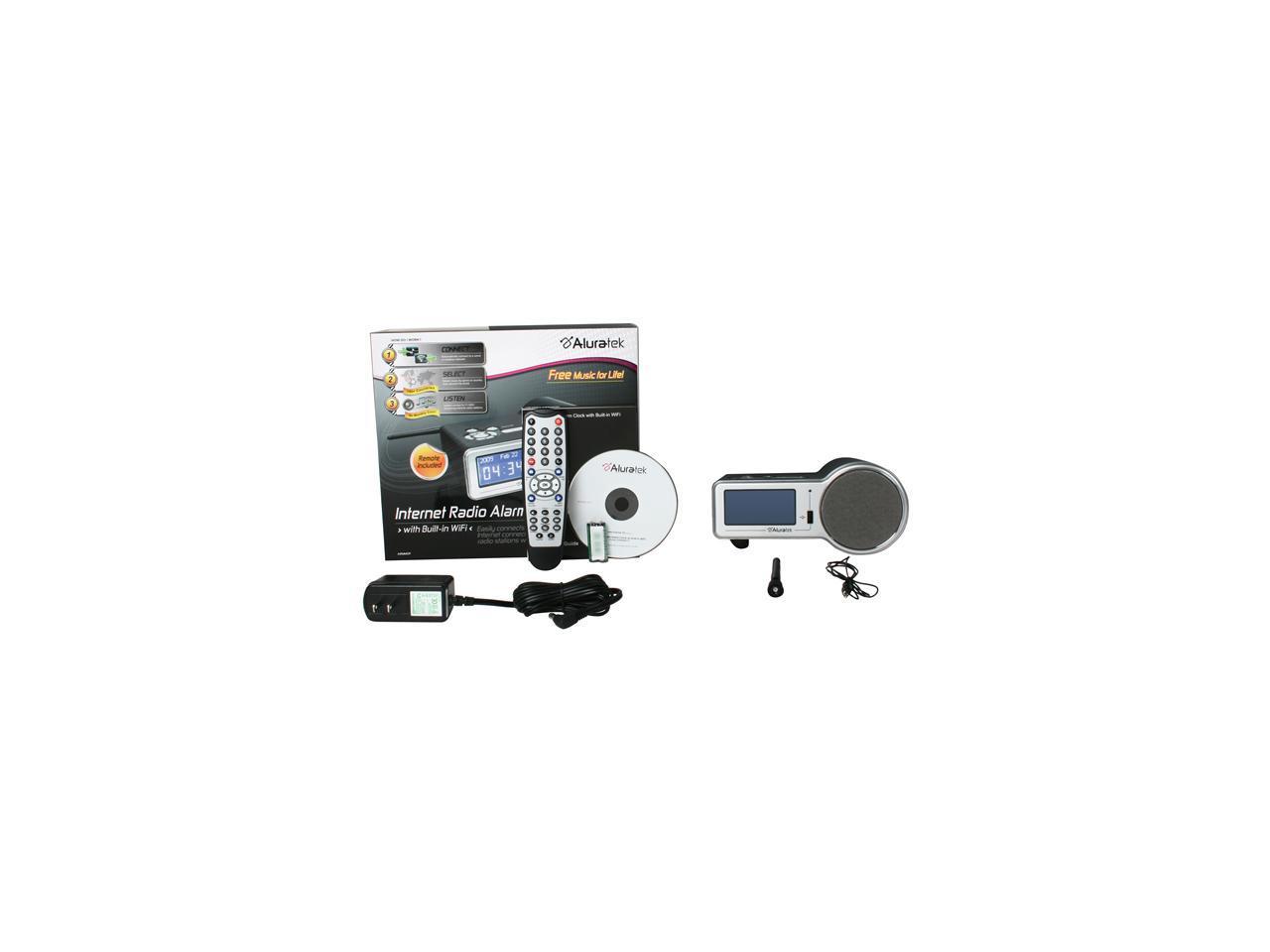 (64) Write a Review
OUT OF STOCK.
Overview
Specs
Reviews
Internet "radio". We've all heard the term and smiled at the joke, right? Well, Aluratek has decided to put the radio back into Internet radio.
Sure, it's an FM receiver for conventional broadcasts in your area, but it's also a WiFi unit, so you can roam about your house and still listen to those Internet stations. Nor do you even have to have a computer running to listen. But if you're not going to roam, you could also use an Ethernet cable to access the 'Net or you can use a USB cable to use a host computer's connection.
You don't even need a computer to set it up. You can also use a USB flash drive and play your favorite MP3, WAV or WMA files. The built-in alarm clock has two programmable settings. The next time one of your non-Internet friends laughs at Internet radio, pull this one out and show them!

Learn more about the Aluratek AIRMM01F

Pros: I don't have to go over all of the features of the device, but all of them are dead on. The configuration was simple. The audio quality is very nice and the speaker gets fairly load, which I was surprised. The ability to connect to external speakers and even a stereo receiver is nice. The Alarm at first was varying quite but it is an escalating alarm, so it doesn't startle you waking up, instead it slowly eases up to the volume you set. This is a nice feature. I read from other people saying it’s hard to turn the alarm off. I didn't find this to be the case. It has a snooze button as well as a stop but on the remote as well as the top of the unit. The stop button turns the alarm off. The snooze is adjustable which is nice. People also said that the navigation was hard to get around, especial getting to the favorites. If you read the manual, it’s actually very simple. I really recommend this product, especially if you are one that love their internet radio and like having it anywhere.

Cons: Ok, so the cons are as follows. You do need to update the firmware before you use the wireless, if you are using an encrypted network. (Hopefully you are) This is not a problem. It is actually very easy. The device has a website but the only thing that get access to is the upgrade firmware, which I did not have success using. I had to dump the firmware on a thumb drive and it was uploaded in a flash. There is no documentation on the devices website or its password. The login and password is admin. The website for the firmware is http://www.aluratek.com/download_drivers_manuals.php. Then choose it in the driver drop down. Yes, the website is not worded right. Then just unzip the firmware and put it on a thumb drive. The black light doesn't dim it is on or off, but it has an adjustable delay, so you can have it on always or off in 1/3/10/30 mins. It would be nice if it had optical output, but hey, RCA and 3.5" jacks work just fine. The hostname of the device is not changeable.

Overall Review: My other thoughts... If you like, things networked and wireless then this will fit you, just fine. I would suggest downloading the manual from the website I listed above, same link. Check out all of the features. It has lots of pictures. The radio is just really super. I can plug it in outside on my balcony, bathroom, and bedroom or where ever your wireless will reach. Best buy has a similar device on sale but it doesn't look as nice as this device. I really think that you can't go wrong with this. I am actually thinking about getting a second one for the living room. I will say having the remote is a wonderful perk. O'ya the FM radio station can be store in a separate favorite list. It also has an auto-programming feature where it goes out and gets the radio stations. It gets good reception, which was impressed, better then my radio with a regular antenna. I can't wait to set it up with my NAS's streaming audio so I can here all my MP3s. Try it out and see for yourself. 8-)

Pros: I bought this internet radio three months ago and added a Logitech S220 2.1 speaker system to it. The sound is excellent and I am thrilled at the many thousands of internet radio stations the radio is capable of receiving. I like the "favorite" stations feature.

Cons: The clock display is way too bright, so I set it to one minute and then it turns off. The radio is complex to tune, but once you've got your favorite stations you can get to them OK. I think there are too many button sequences to press, but this difficulty is not a stopper, because of the great sound quality and stability of the radio. But, I must again say the tuning complexity is quite annoying.

Overall Review: I'd like to see a feature like in car radios where there are 5 or more buttons set to specific staions, so I could press one button to turn on the radio and then one more button to tune into a favorite station. I believe this feature, lacking in the current configuration of the radio, is a serious design oversight and if corrected would bring in a larger group of customers who abhor complexity, but who would buy if simplicity of tuning was a key feature.

Pros: I like this radio, makes it much easier hearing internet radio stations not having to deal with 'puters ... :-) Sound quality is really good once you connect it to external speakers. Internal speaker isn't that bad ... for that size of speaker. Setup, WEP included, was easy and self-explanatory, didn't need manual. Got it for $ 99 --> I'm happy, great price !

Pros: I thought this might be a pain to set up but it wasn't...I was listening to a NY, NY. station ten minutes out of the box...easy to type in WPA password with the remote that's in the box; no brainer...easy to find stations anywhere in the world...bright screen turns off with touch of a button....didnt have to update firmware to use.....solid product with good fidelity

Overall Review: if you do a lot of traveling and stay in motels with wi-fi, the radio would be cool to have to keep in touch with home or the world....it's not so big that you couldn't throw it in a suitcase

Pros: Realy good sound quality. Easy to read screen that can be dimmed to 3 levels or turned off. After registering on the web it was easy to add stations from a massive list or enter your own URL's. Adding FM stations was automatic and correct.

Overall Review: Upgraded the firmware (R1.37) on a USB stick I did not notice any changes. I plugged in a small fm transmitter to broadcast it around the house. best $100 I spend.

Pros: Had Wifi connected and listening to stations within 10 min. USB with SDHC card connected and listening to MP3s in another 2 min. FM Radio with ID tags. Unit will act as a wireless access point! Streaming music from home computer/server. Automatic clock sync/update through internet. Amazed at features and size. Has RCA stereo out jacks. Multiple wired and wireless connection options.

Cons: No battery backup. Sound is not that "big" but hey the unit is quiet small - smaller than I thought it'd be. Adding MP3 files to favorties/playlist is not intuitive at all - manual does not help. Like everyone else said the backlight should have a dimmer option. Though it's an alarm clock, I could not find any sleep option.

Overall Review: This thing is absolutely loaded! Does far more than I expected. For the most part it's a breeze - you will need to sit with the manual to get up and running quickly. I'm going to start shopping for a boombox that will do what this little thing does with connectivity and play options. Very happy with purchase.

Pros: Am totally amazed by this radio. I've programmed about 20 public radio stations from all over the US in them - if I miss a program on my local station, I can catch it on another in a different time zone. I've set it up to listen to Radio Margaritaville - don't need Sirius/XM for that now. Pretty snappy, responsive, and they've done a great job of finding different radio stations around the world.

Cons: The backlight. Many have said it - it is either on... or off (you can schedule a delay, but...). It is quite bright - too bright to put next to your bed. Also, the navigation keys on the radio and remote - are easy to mis-navigate with. But, all being said - it works quite well, amazingly so.

Overall Review: Some have indicated you can't input lower case passwords for wireless connections - I had no problem doing this on the original (and updated) firmware. No problems finding the FW update and .PDF manual on Aluratek's website. The CD included wouldn't read on my PC, but I put it in another and discovered - all that was on it was the .PDF of the owners manual (given to you in paper form and on the website). Not a perfect product, and not that usable as an alarm clock due to the bright display, but pretty darned slick...

Cons: 1)LED display screen (backlight) so bright, it could wake up the dead. There's no adjustment setting to tone it down, only options to leave display always on for selected intervals or always off. If always off, you never see the time unless you press a key on the radio or the remote. 2) Can only use channel 11 for radio to be recognized on the network

Overall Review: Comcast requires me to use 2 modems for my business, one for my phones and one for my Internet. The Internet modem's firewall had to be remotely turned off by a tech at Comcast for my radio to be assigned an IP address. I guess having firewalls in my D-Link router and Comcast modem blocked the radio. My router displayed the radio using WPA security but, not knowing the password for the Comcast modem's firewall, it was blocked.