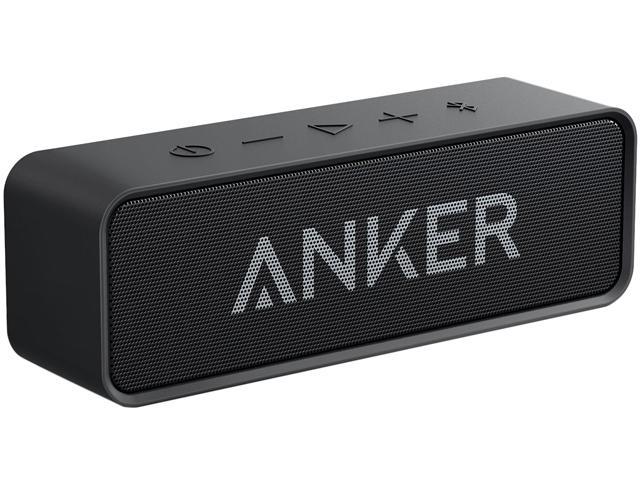 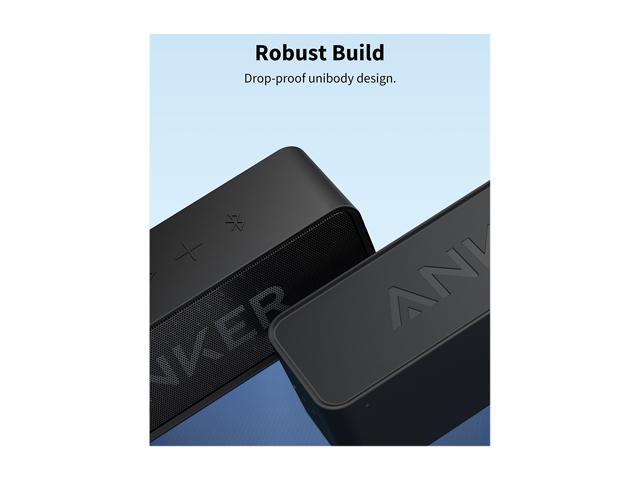 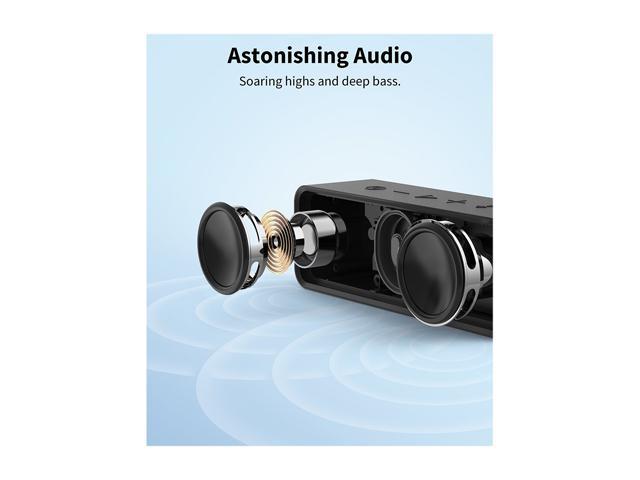 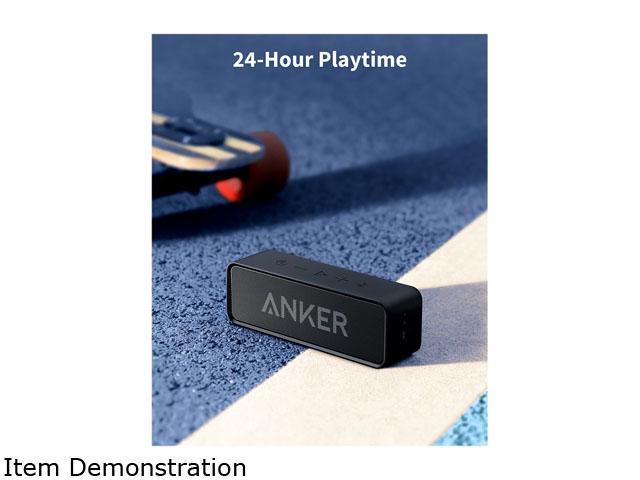 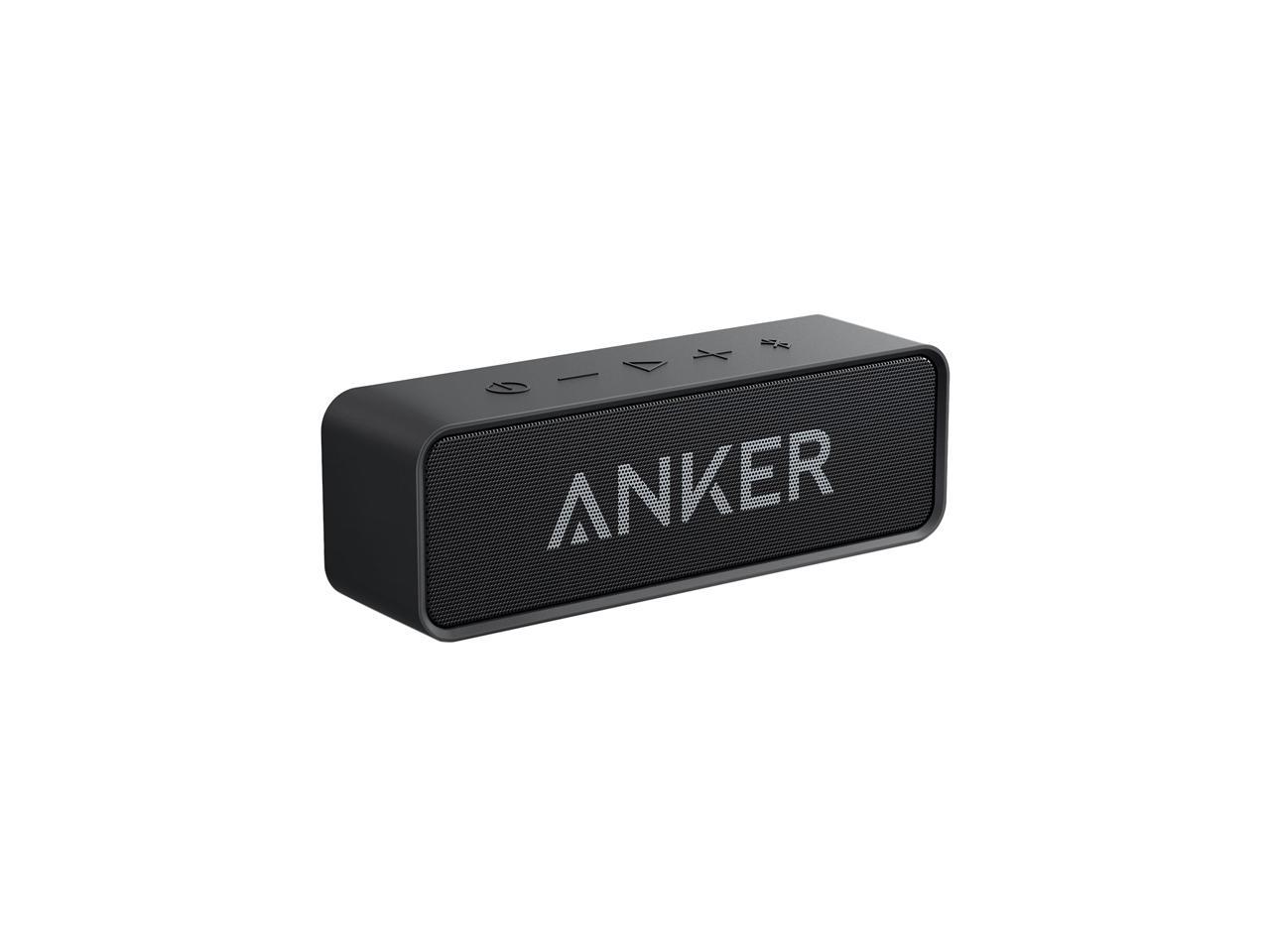 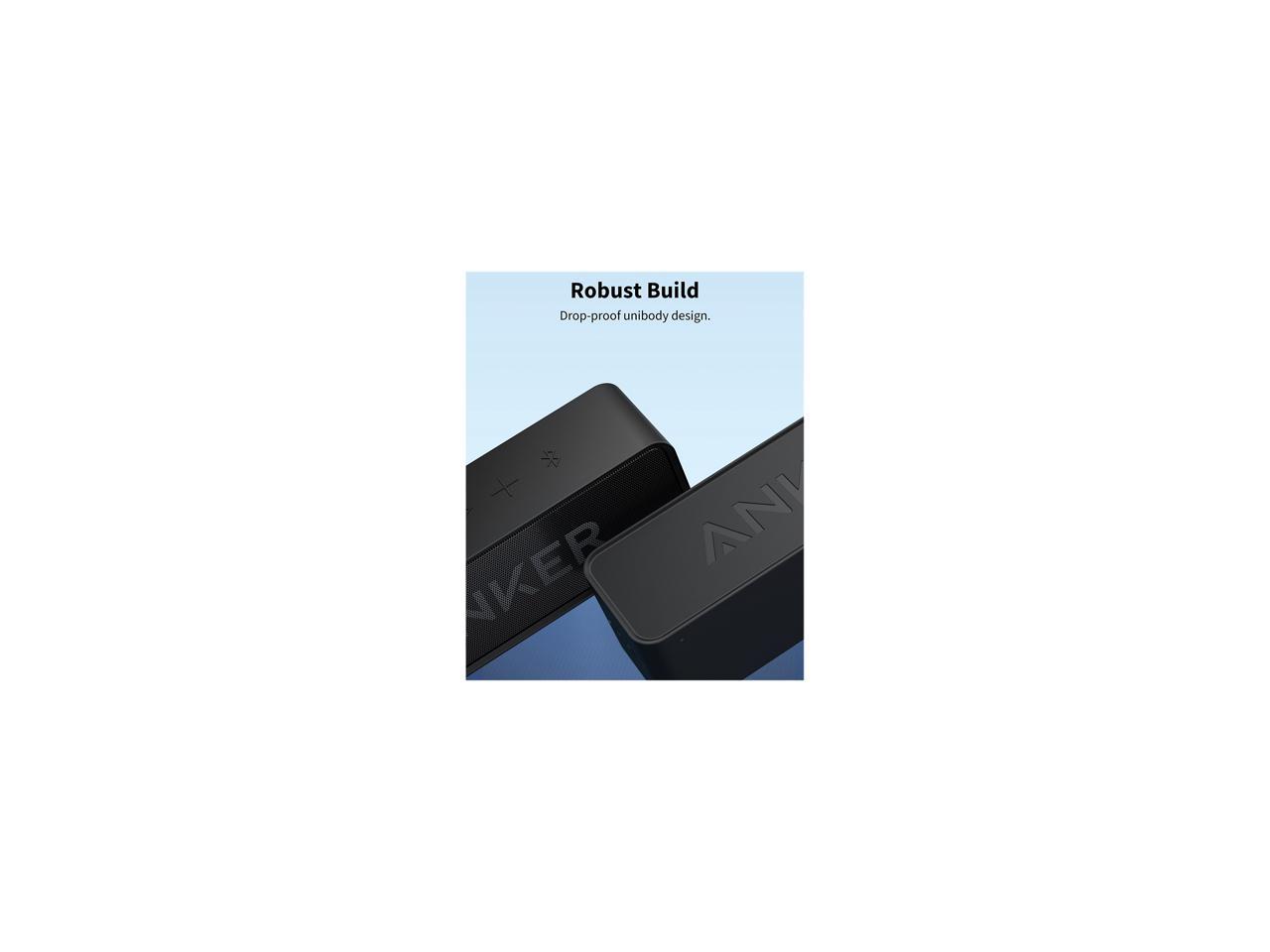 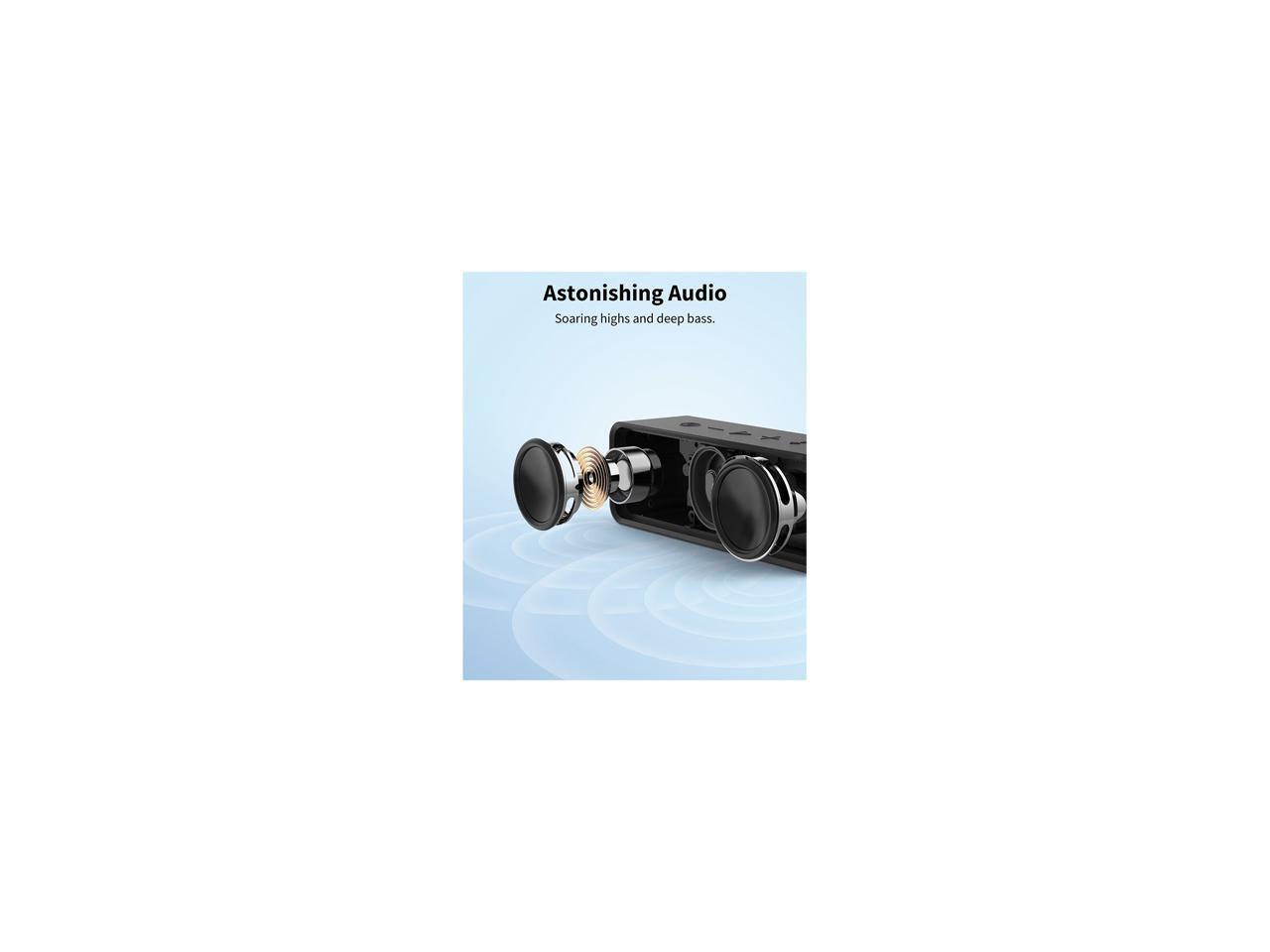 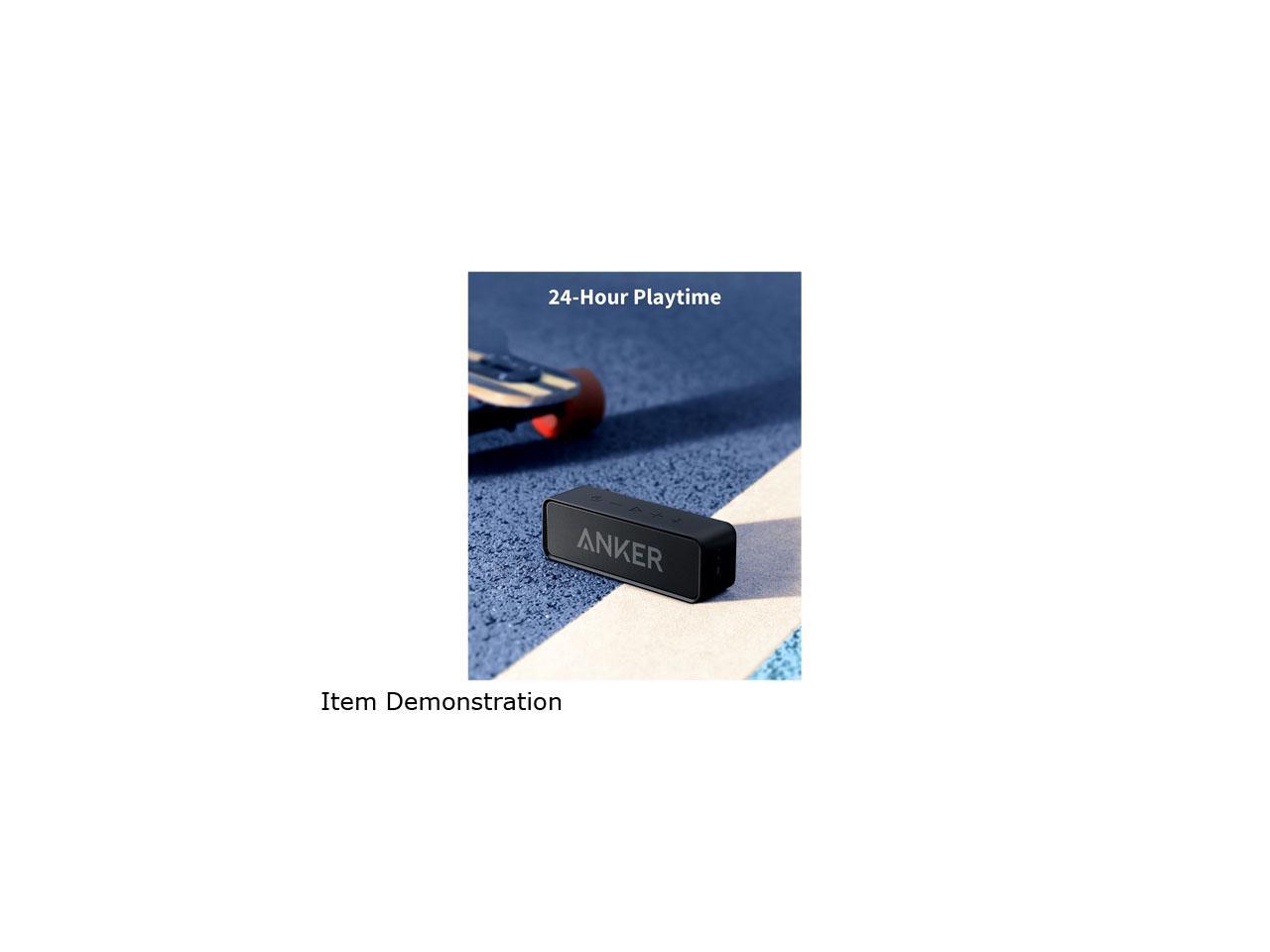 The Anker SoundCore Bluetooth speaker lets you enjoy superior stereo sound with crystal-clear clarity and tight bass wirelessly from any Bluetooth-enabled source. Featuring up to 24 hours of battery life and excellent portability, you can stay unplugged longer and never be weighed down. Want to beef up the sound of your Alexa-enabled device? You can connect it to this Bluetooth speaker.

SoundCore's curved edges and sleek controls accentuate its unibody design. Choose from red, blue, or black to perfectly complement your home and style.

SoundCore synergizes Anker's power management technology and a high-efficiency Li-ion battery for up to 24 hours of sublime audio.

Bluetooth 4.0 ensures your devices maintain a strong, stable connection up to 66 ft. away for skip-free music.

Use with phones, tablets and almost any other Bluetooth-enabled device. SoundCore reconnects to the last device used for instant music playback.

Pros: -Sound quality is good though for the money Tribit Xsound is way better listen to the difference between the two on youtube by searching for "tribit xsound vs anker soundcore" ... - got this on sale at a good price (do NOT buy at full price go for the Tribit instead) - customer service made it right - eventually - when they mailed me a defective replacement speaker - pairs without difficulty with any of my devices

Overall Review: Okay so don't make the mistake I did.. if you're using this even for just 10 minutes a day like I am, it will still need recharging every 4 days probably for 4 to 6 hours. And I REALLY wish the customer service rep at Anker had just told me that instead of offering to replace it given the world of grief that followed (that anker eventually resolved however). So when the replacement speaker arrived (anker to their credit did give me a prepaid shipping label to mail the "defective" speaker back to them) it was worse than the original, the red led light in the front stayed on never turning blue. This is bad since the light is supposed to turn red when it needs to be recharged, eliminating the cue you need that " hey my speaker needs charging" At this point it became clear that my anker cust. serv. rep. I was emailing, while pleasant, had no idea what she was doing. The rep said at that point if the speaker was on all the time despite not being used that amount of recharge time would be normal (if she'd only told me that to begin with instead of arranging for a replacement the problems I had afterwards with her would not have happened). Despite the picture I attached of the red led light the rep asked for a short video showing the problem.... a video is going to show the exact same thing red led light! But fine did the video since that's what she wanted. At this point it was my 3rd email begging them to send a replacement speaker since they'd sent me a defective one and this is when the misinformation started.. the rep said that the red led light just indicated whether or not the speaker was paired with the device it was transmitting sound from which even I knew wasn't true, yes it does that (flashes blue to connect, steady blue when connected) but I also could see that it turned red after 4 days , and when charged turned blue again. Rep's solution was to offer a fifteen percent refund (which wasn't much at all given the cost of the item) or to let me return it for a full refund via their prepaid label. At that point given I'd already begged 3 times for them to just send me a non defective speaker (and I'd accepted that it would need to be charged every 4 days and told them that in my emails) I am ashamed to say I got frustrated. I told them that I really didn't want to dispute the charges through my credit card company, I really didn't want to leave negative reviews letting everyone know about the bad experience I was having wigth them but I would if I had to. Afterwards I felt bad - the rep was obviously clueless but she was pleasant and it was obvious she was trying - I apologized but repeated my request (4th request this time) begging for a replacement speaker. Rep's response was basically normally we don't do this but we'll send a replacement speaker and let you keep the defective one (not that the defective one does me much good :P but.. maybe it's not cost effective for anker to pay for a second speaker to be mailed back to them?) Got the replacement replacement speaker in the mail today so far it's working well.. the reason for the 4 star review despite all this grief is at the end of the day although I had to get frustrated with them for it to happen, anker did resolve the situation.. this is better than a lot of companies out there (rosewill has almost always let me down in the past with their warranties as far as not being willing to help me and lack of prepaid shipping labels, so that's just one example where anker at the end of the day is miles ahead of the competition).

Pros: For such a small unit with a very reasonable price it packs a decent punch. I have not tried the Bluetooth set up yet but am very satisfied with it Hard Wired. USB charging is a huge plus.

Overall Review: Anker reached out to me unexpectedly to inquire about my experience with their product (nice touch). I would definitely recommend it to anyone looking for a compact unit that delivers!

Cons: Extremely slow shipping Ordered on 12/8 did not arrive until 12/26 This is very unlike Newegg