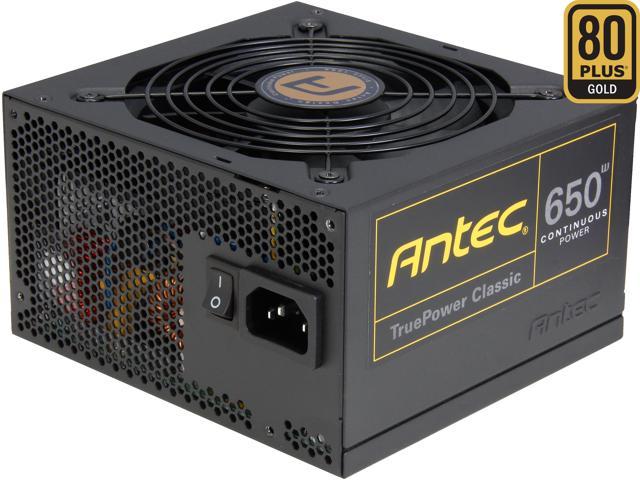 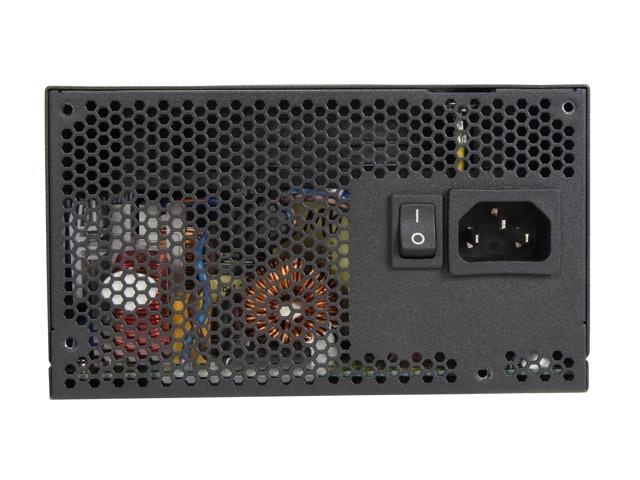 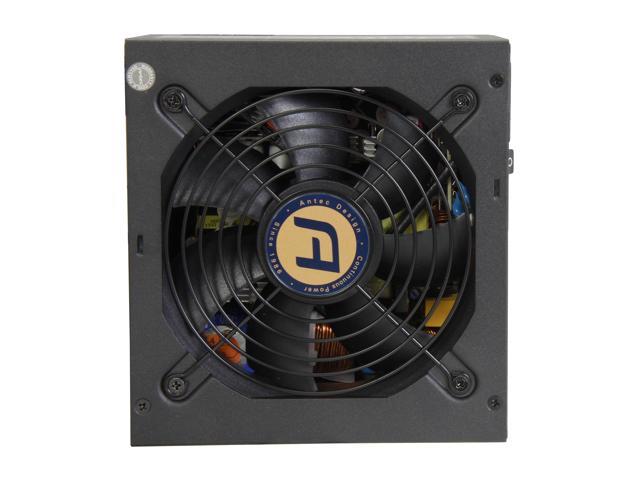 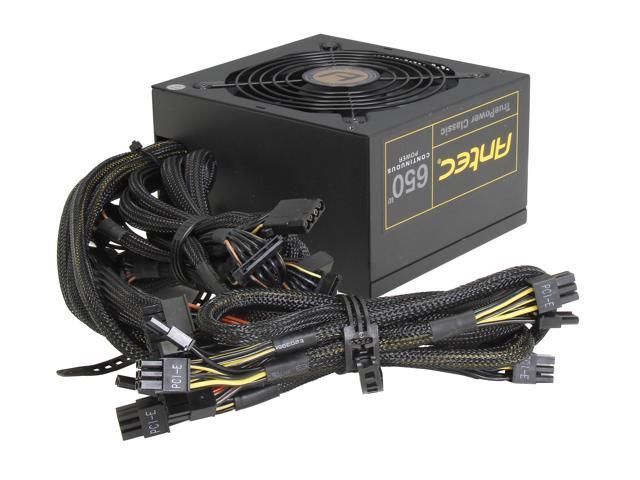 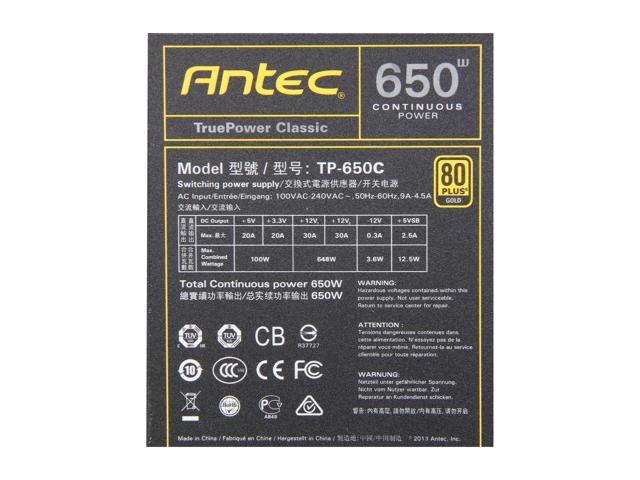 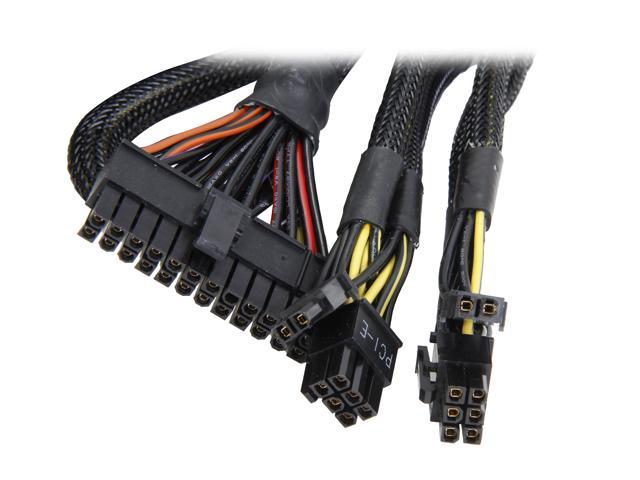 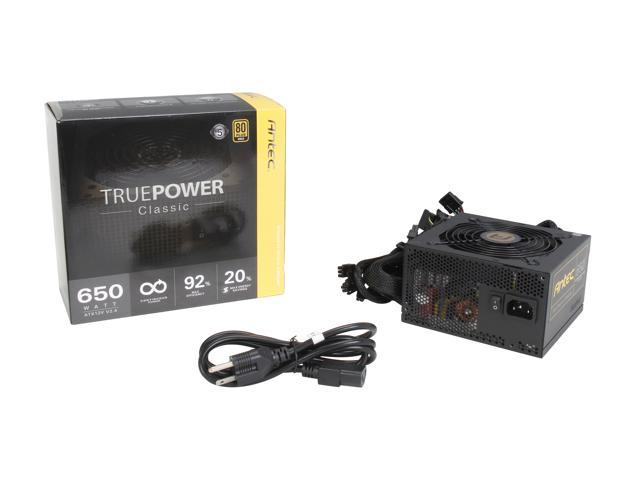 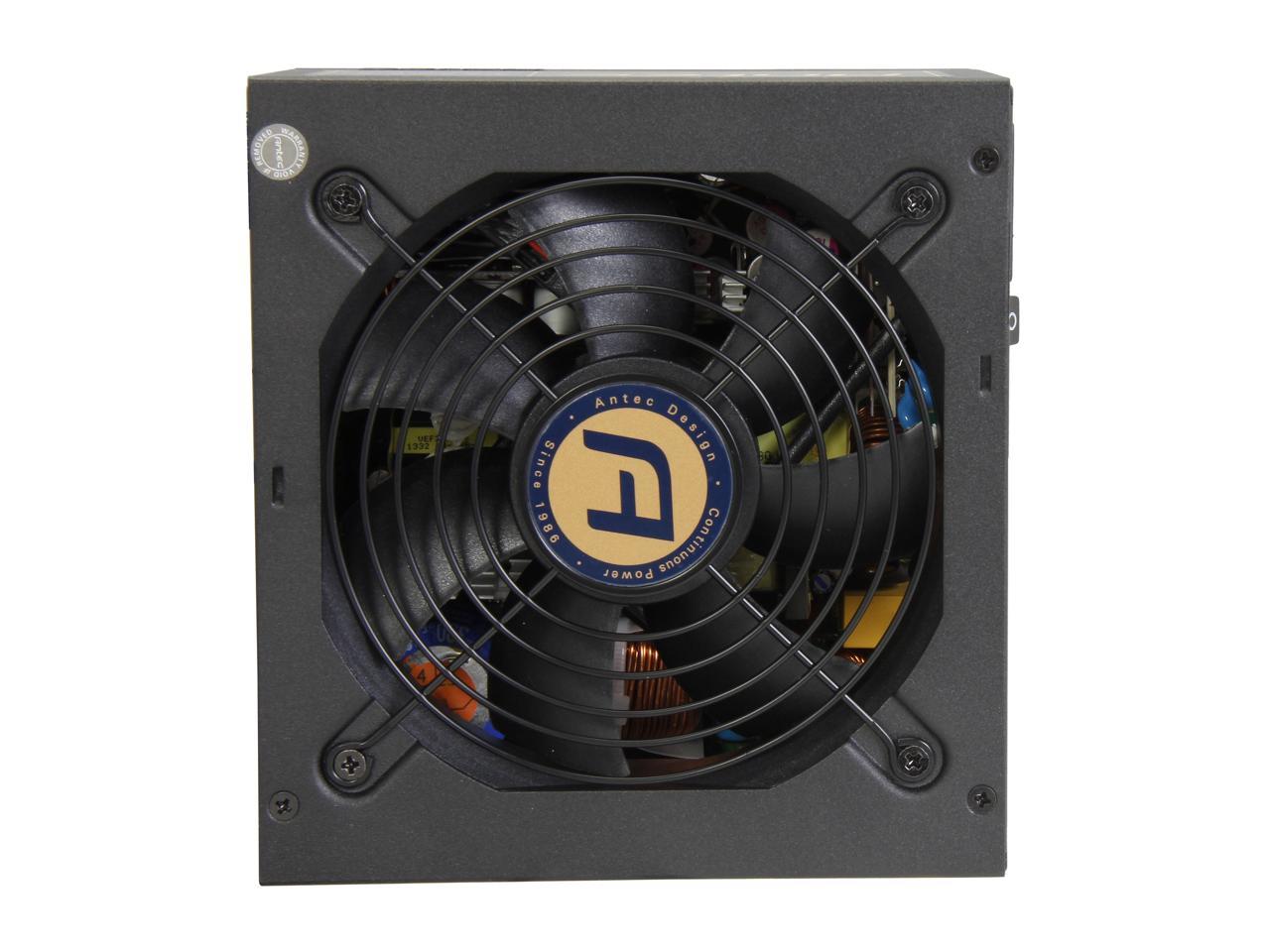 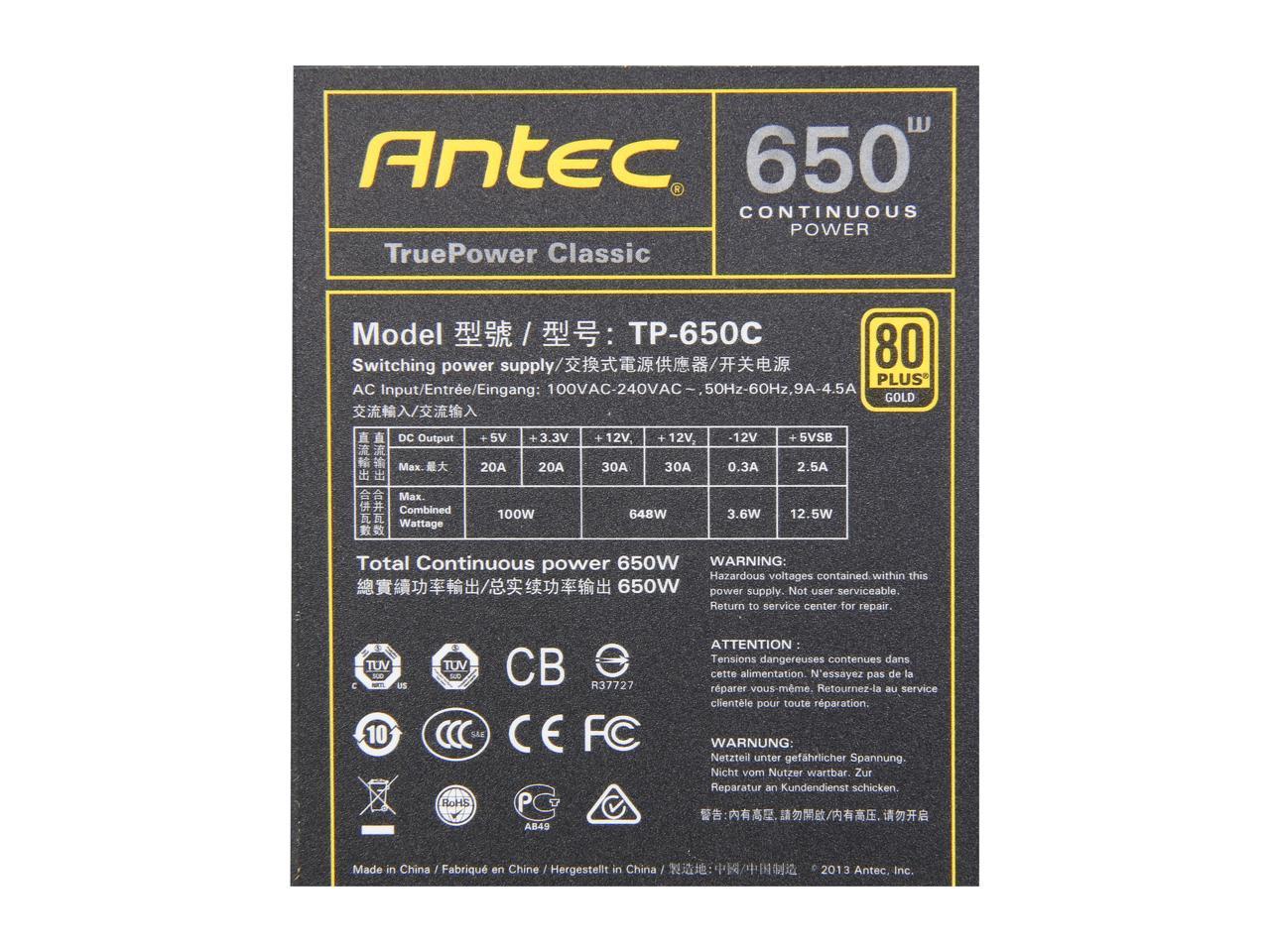 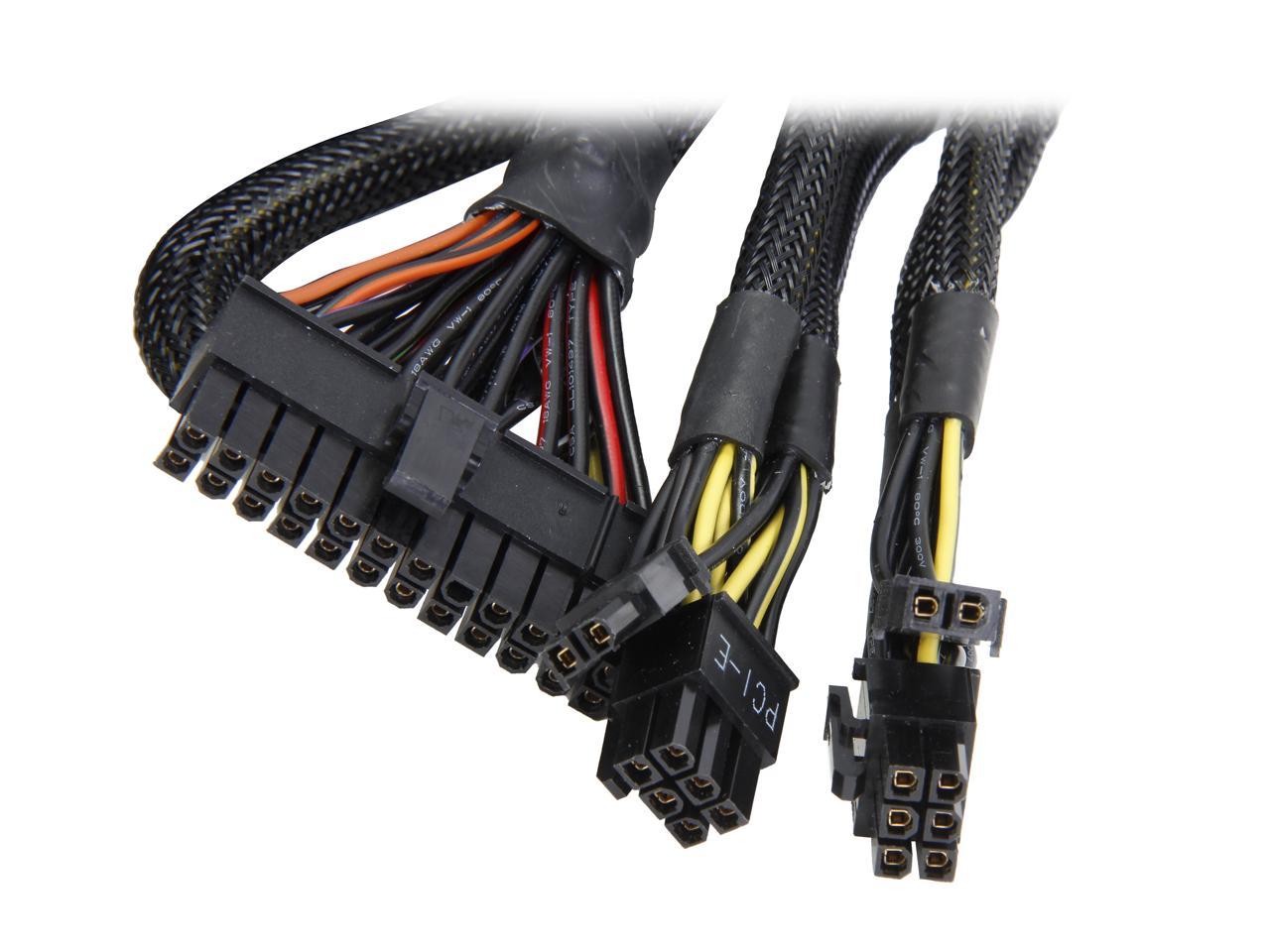 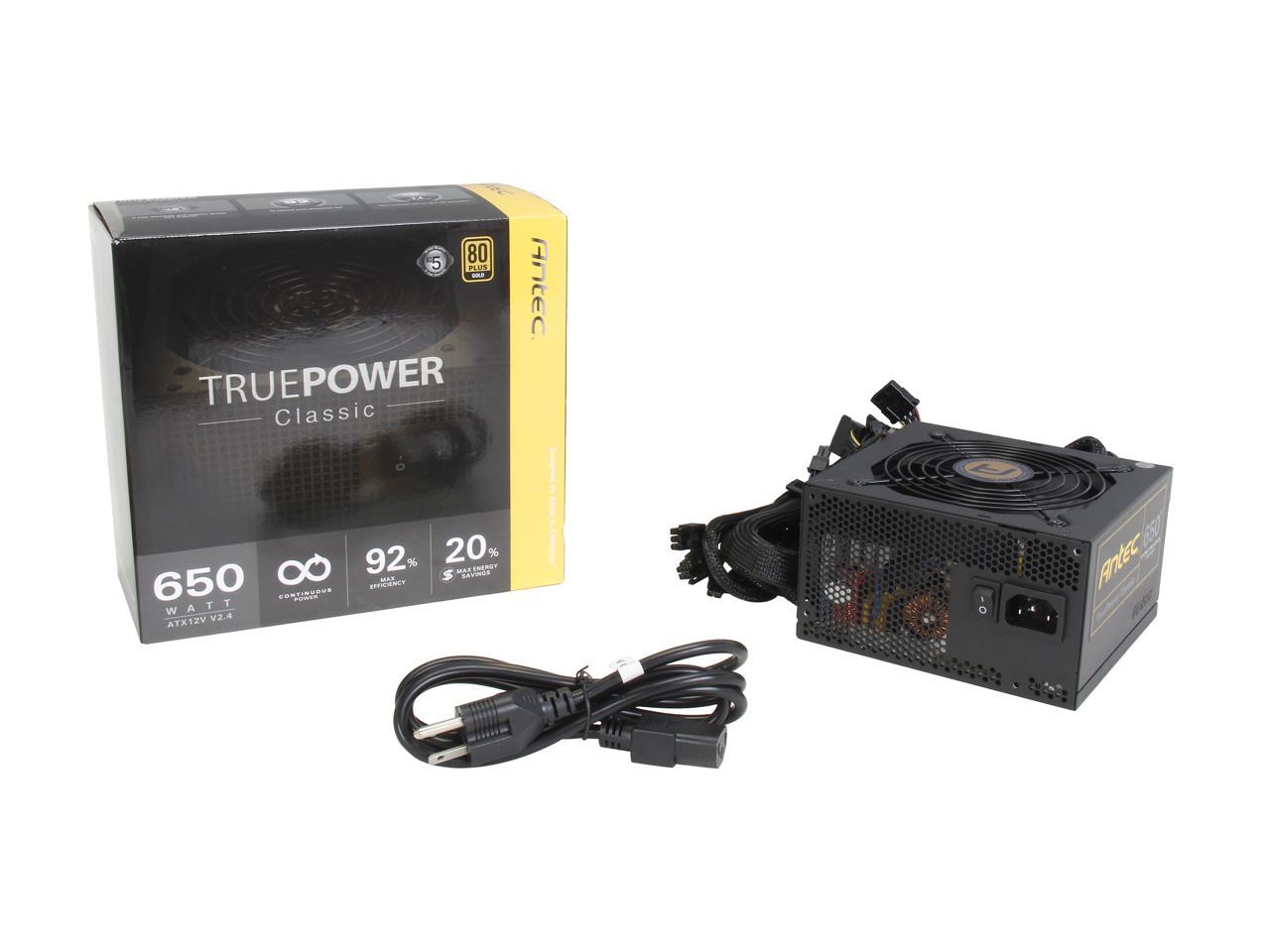 Antec’s TruePower Classic series sets new standards for power supplies. TruePower Classic is one of the first series to comply with the toughest energy standard available, ErP Lot 6: 2013. By using a PSU that is 80 PLUS® GOLD certified, operating up to 92% efficient, you can reduce your electricity bill by up to 20% as compared to many other power supplies. Two High Current Rails and a 100% +12V output ratio maximize TP-650C’s capabilities to power the latest CPU’s & GPU’s. TP Classic’s PhaseWave™ Design is a server-class LLC design with a synchronous rectification based on a DC-DC topology. Japanese capacitors achieve unprecedented tight voltage regulation & low ripple & noise to maximize your system’s performance. Antec’s intelligent Thermal Manager fan control spins the high-quality 12cm DBB fan optimally to cool your PSU quietly. CircuitShield™ makes the TP-650C safe and reliable in any environment with its eight industrial-grade protections. Backed by a five-year warranty and 24/7 lifetime global support, the TP-650C is the guaranteed gold standard for power. Learn more about the Antec TP-650C

Pros: It "sort of" works now

Cons: Cannot power a Z97 board with 4690k, SSD and onboard graphics under load for more than a few hours at stock speed. System has now become unstable after 7 months of use

Pros: A lesson in PSU buying, for the uninitiated: Do not buy the biggest and most expensive supply you can find simply because it sounds "right" to have a 750-watt supply in your PC. You're wasting power, creating unnecessary heat, and wasting your money (unless it's for some reason cheaper to get the 'bigger' unit on day X). In order: a) know your PC's absolute maximum power draw. For the average "gamer" PC with one mid-level GPU, this is under 300 watts (at the wall; supplies are measured at "actual" draw). I recommend a Kill-a-Watt meter, personally, and Crysis 3 (v-sync off) should do the trick nicely (it crushes both your CPU and GPU[s] like nothing else I've seen [power draw well exceeds even FurMark]). b) once you've determined this number, multiply it by .9. That is a "give or take" figure of your "actual" power draw, accounting for the inefficiency of this particular model. c) Divide your actual maximum power draw (measured * .9) by the supply's rated maximum sustainable output (the number you're paying for). What you'll find is the percentage of the PSU that you're actually using at your PC's maximum (which it will rarely ever hit, if you game with v-sync on). If it is higher than ~.75, the PSU is too "small" for your PC and you must go up another hundred watts, re-measure, and re-find the result. If it is lower than ~.75, the power supply is either ideal or far too "big." Frankly, if you're running one GPU, a Truepower 550 is too much for your system (I'd go with the 450, if available when you're making the purchase). Your goal is for typical draw to be between 50 and 75%...not 20, 30 or 40%, which I'd estimate to be the case for most people buying the 750-watt unit here. Why? PSUs are most efficient, generally speaking, between 50 and 75%. There is absolutely no reason, save for future ability to upgrade, to buy a bigger supply, in the case of a trusted and respected supply such as this one. Even running two 670s (overclocked) and a 2500K at 1.3v (this alone draws close to 140 watts), my maximum, worst-case draw is barely over 500 watts. On average, during gaming, I'm between 250 and 350 watts. Thus, the 650-watt model is the best choice for my "top 1%" system (.76 at maximum vs. .66 with the 750...too big), where even the 550-watt model could be justified, given my *typical* load during gaming. The 750-watt model can't, as it's less efficient at my wattage and as I have no plans to upgrade the GPUs or CPU at any point in the near future (again, if you *know* you're upgrading, go for it...but you're wasting power and money in the meanwhile). Heck, even if I went with two Titans, I wouldn't have to upgrade...I'd simply be running at lower efficiency levels. As I stated in my prior review, this (650W) supply runs virtually cold even after half an hour at 500 watt draw. Believe me when I tell you that unless your system is tri or quad SLI and you're running an AMD CPU (help you), you simply don't need

Cons: p.s. "SLI certified" means nothing save for rail configuration. One rail is arguably best, but two is OK (I haven't had a shutdown yet due to a rail being exceeded, so the PSU must be "smart" to some extent; each GPU pulls 66 watts from the motherboard, keep in mind...that's 12V1, not 12V2). (Rails are a measure of supposed protection in the event that something in your system blows; theoretically, the separate rail would prevent the other components from "blowing." I have never seen or heard of anything "blowing" in a PC [save for liquid cooler leakage], but that's me.)

Overall Review: p.p.s. these supplies put out close to 100% of rated power at 12 volts. Virtually everything in a PC uses 12V these days, so simply forget about the other voltage ratings...they mean nothing anymore. Act as if all of your draw is 12V, because it almost nearly is. p.p.s. to the other gentleman who believes that this supply is a fraud of some kind...my (650 watt) supply is barely warm to the touch (I refer to this as "cold") after 30 minutes at 500 watts. Either a) you're lying, b) you don't know what you're doing, or c) your unit is defective. Instead of writing a silly "review" contesting measured efficiency, take appropriate action by starting with a new model (if you're sure you aren't to blame). The difference between "Gold" and "Bronze" running a 250-watt PC is indeed negligible. What were you expecting? At 500 watts, it's significantly more important (though my interest in efficiency is less heat output...and this is definitely noticeably less, in my experience).

Pros: Paid $60 after you consider the rebate on the way and am very happy with this. Currently have it hooked up drawing 550 watts giving off very little heat (touching it you can almost think its off). This isn't modular but unused cables can be wrapped and put to the side. Tons of sata and few older molex connectors and a total of 4 PCI-e power connectors make nice 2 card compatibility.

Cons: Didn't pick up 2 at this price. If anything, all of the connector options make a lot of cabling that needs to be wrapped and put to the side if you're not using them but a very minor complaint.

Pros: Bought it in Black Friday for $60. At this price, it was a great deal for 80 plus gold psu. Great output at 12V+ rail (separate rails for your graphics card which is just what you need). No noise at all. I have GTX 770 and AMD FX 8320

Cons: None so far. Modular would have nice. But I have great casing with good cable management. It might be an issue for those with small cases.

Overall Review: If you find this psu in deal, grab it.

Overall Review: Always ensure you have the power needed for existing hardware and possible expansion. Can safely run CPU, water cooler and two SLI cards with this PSU.

Pros: Easy to install, more connectors than i will ever need. it was prob just were i live but i picked the free shipping and got it in 2 days.

Pros: Easy to install, quiet. Tons of extensions and plugs (maybe a bit too much)

Cons: The cords are thick and hard to manipulate. Im pretty green at this so I had to re-arrange constantly. But at least they are durable.