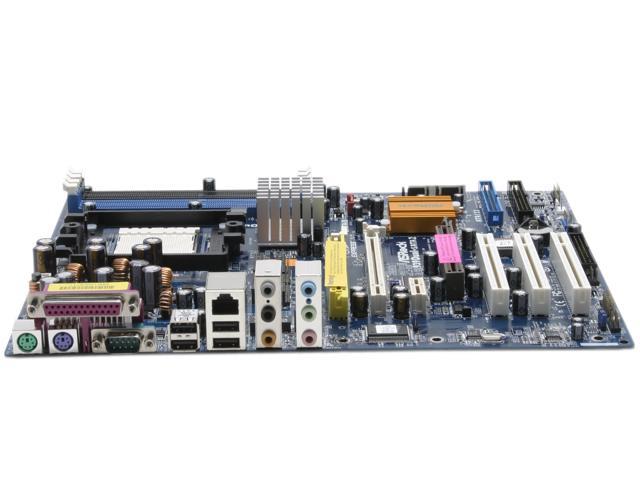 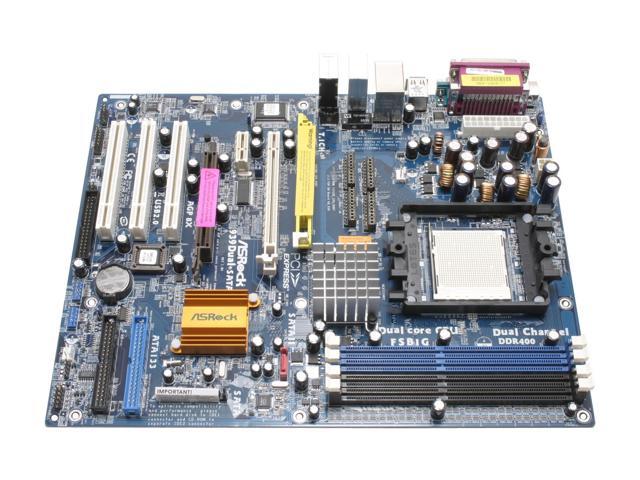 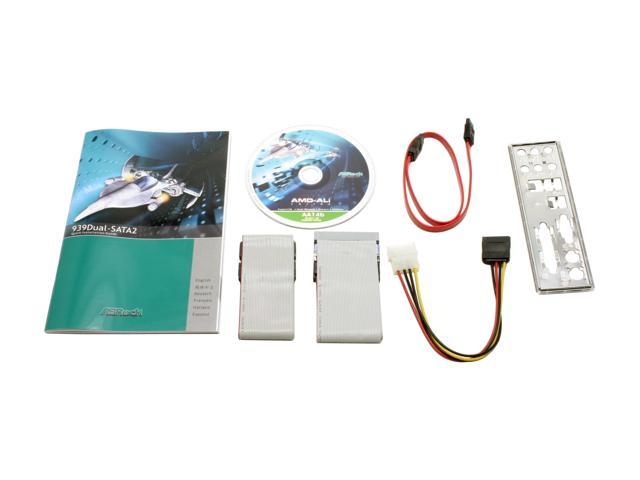 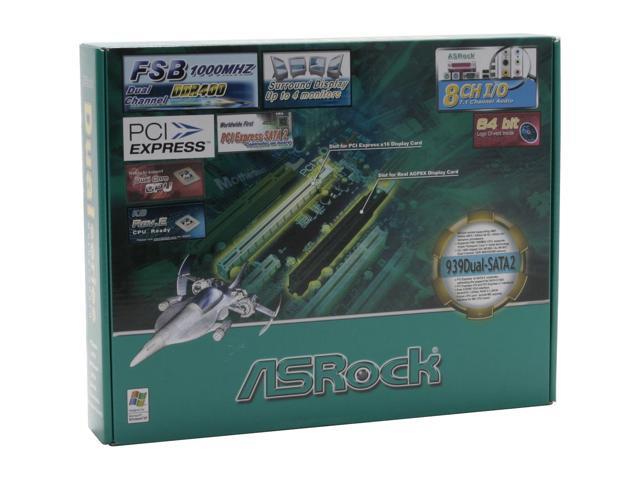 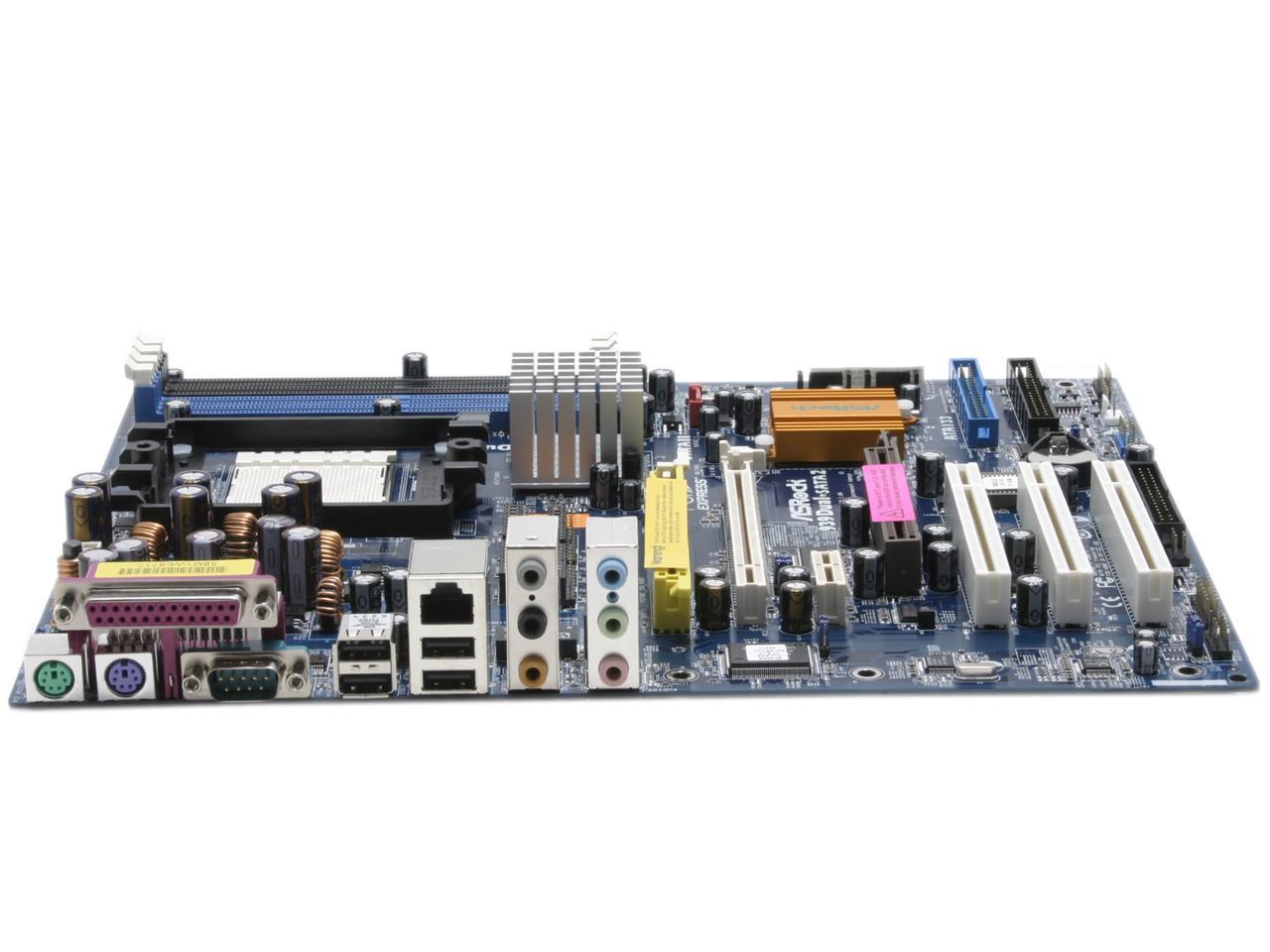 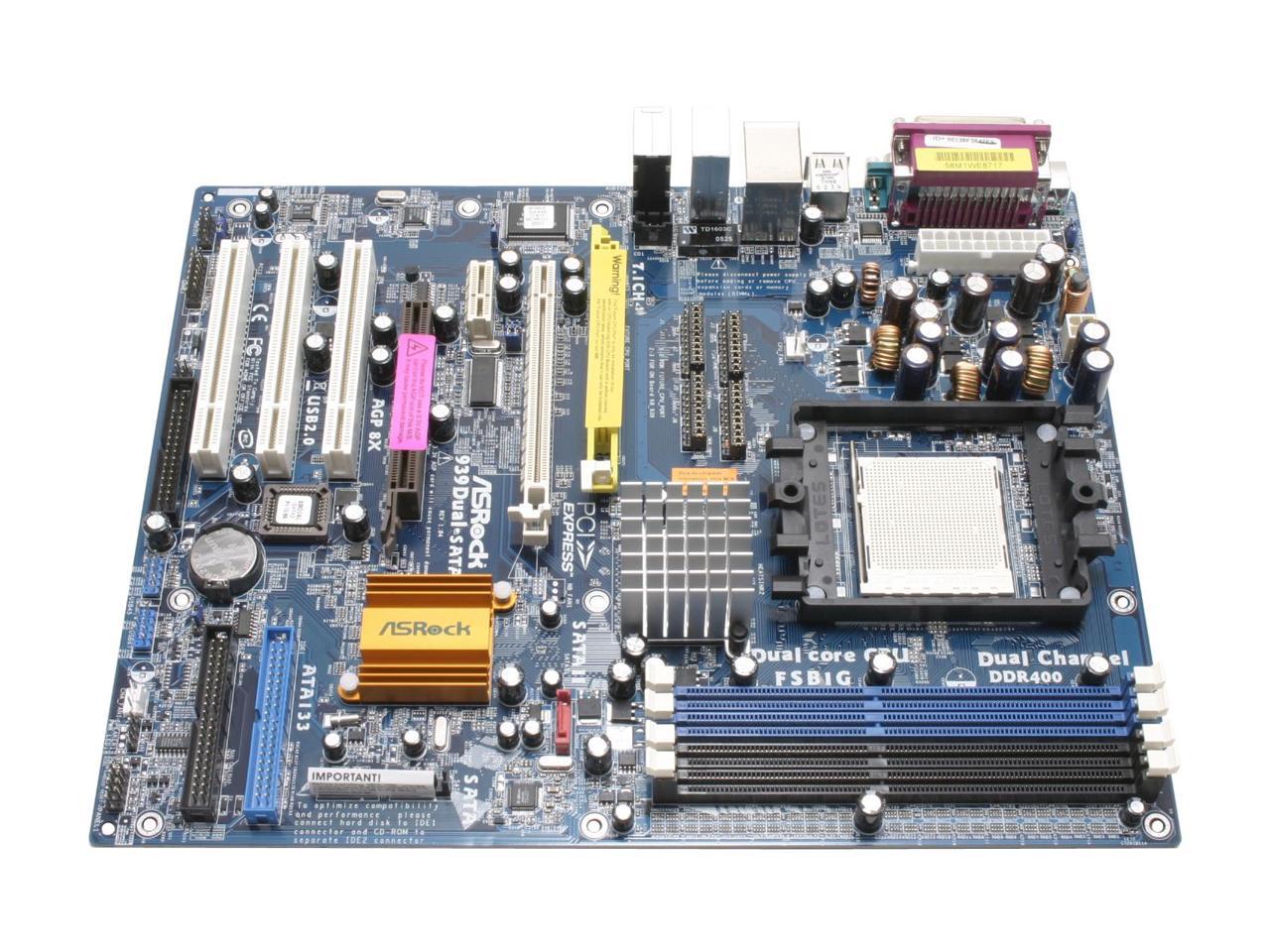 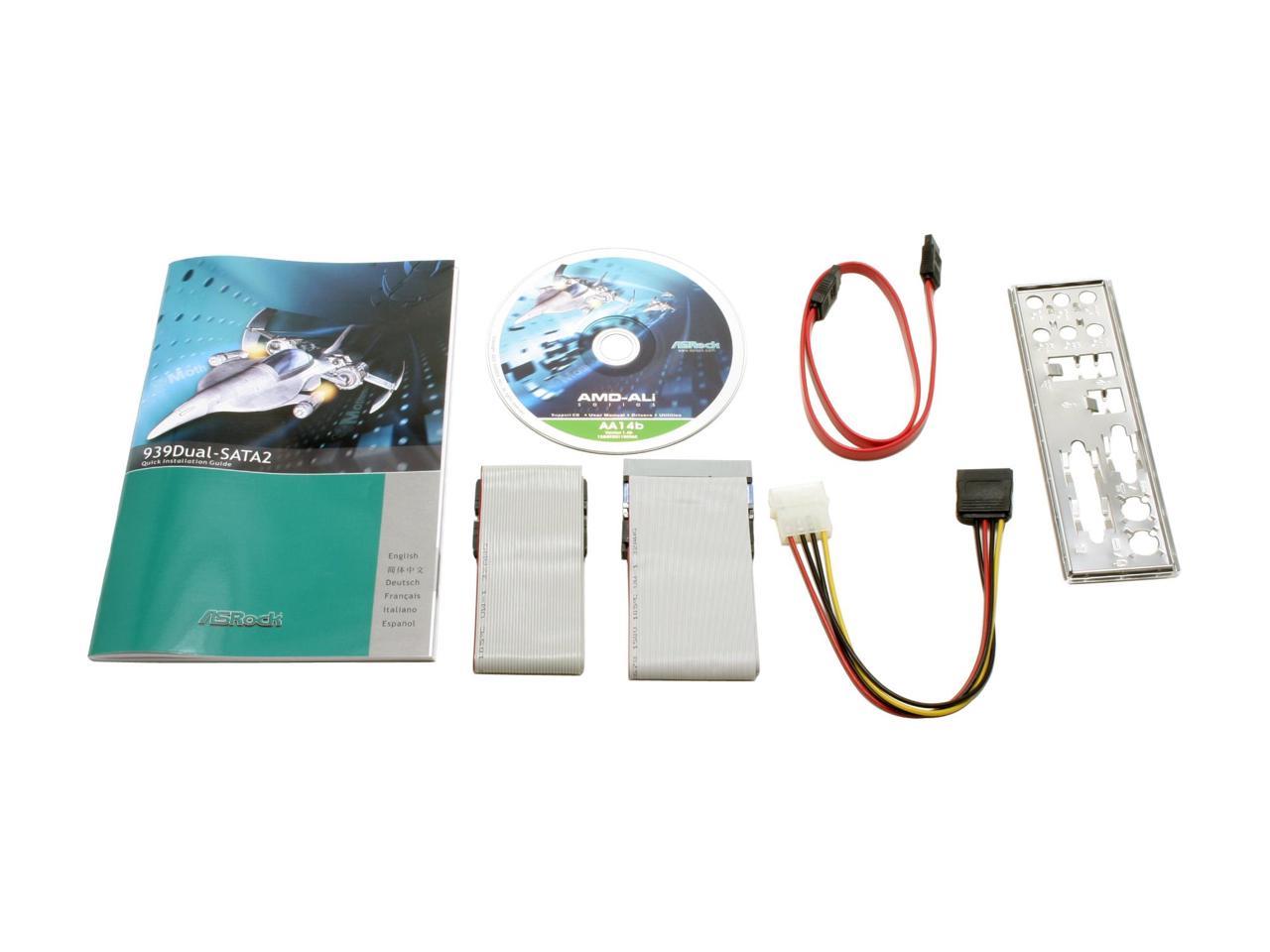 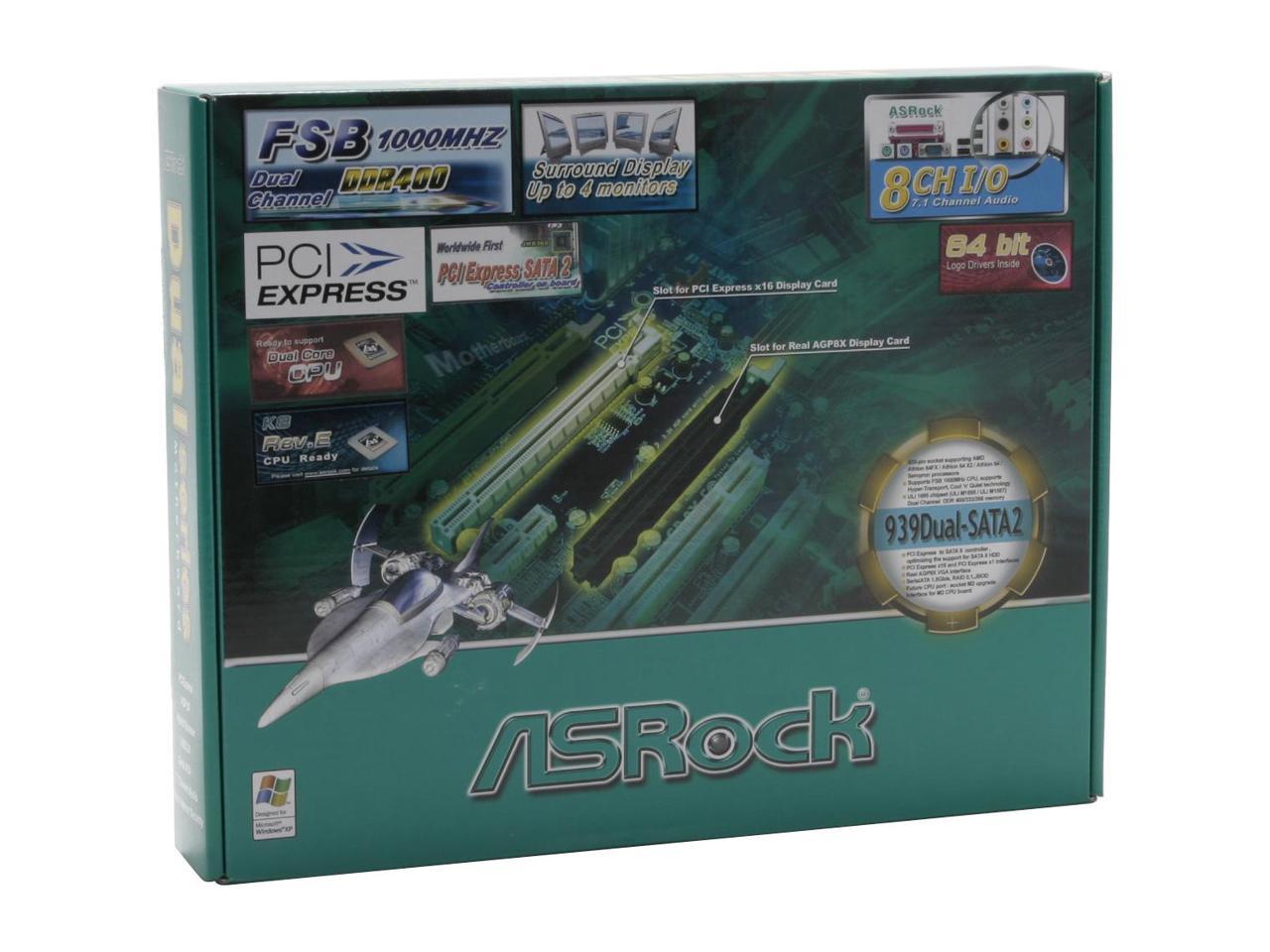 (1,045) Write a Review
OUT OF STOCK.
Overview
Specs
Reviews
Versatility in a motherboard can mean many things, but seldom do we see a board which can support both PCI-e 16x and AGP 8x. ASRock has managed it in a value-driven board that gives new meaning to “bang for the buck” giving you the chance to build a platform capable of being upgraded for a long time to come. Data transfer rates between the chipsets hum along at more than satisfactory speeds, and this board will help you keep using an AGP card until such time as you see a clear benefit from switching to PCI-e. ASRock’s created something unique, in that in most boards, either the AGP or PCI-e suffers from some penalty due to the dual nature of the board, but that’s not the case here.
This truly versatile board has a 1GHz FSB (yes, you read it right), and supports the latest AMD processors. 4 slots will give you up to 4Gb of 400 MHz DDR RAM in true dual-channel configuration, and the SATA connectors will give you room for enough storage space for almost anyone. The onboard Realtel sound processor delivers rich-full range sound through your speakers, to keep you in the middle of any action, whether a movie or immersive game sequence. ASRock really pulled out all the stops in creating a board that will keep you playing even through changes in your CPU!

Learn more about the ASRock 939Dual-SATA2

Cons: -Propensity for the BIOS to re-allocate the boot drive sequence when adding hard drives (easily corrected). -Mine came with a very loose fitting red SATA drive cable (easily corrected w/aftermarket cables). -Only three PCI slots (can see how one might be occluded with an AGP GPU that has a very large HS/fan). -No onboard Gigabyte LAN speed (only obtainable w/multiple in house PC systems anyway, not via the net). -No onboard Firewire.

Overall Review: Came w/BIOS 1.2 installed. Known Issues Up to this Point: BIOS appears to have a preference for the slower IDE over the faster SATA. If anyone plans on using multiple HDs (i.e. SATA & IDE) be aware that you must go into the BIOS and change back the order of your hard drives so that your OS boot drive is still number one. RAM was set by the BIOS as 333. A simple manual adjustment brought it to 400. Replaced loose fitting SATA cable w/aftermarket one ordered here. One little caution: I read in one of the reviews that occasionally the MoBo chipsets are not completely covered by thermal paste, so I removed the heatsinks and had a look. In my case, about a third of the lower chipset was bare of thermal paste. Thoroughly removed stock thermal paste & replaced w/a generous coat of Arctic Silver 5, all is now well. Passively cooled MoBo helps keep system very quiet w/efficient SilenX case fans. Easy to set up, even for a noob! System running for almost 2mos now, w/out a hiccup. Very stable.

Pros: Great deal, good performance, AGP/PCIExpress on one board with fantastic AGP performance. Many options in BIOS. EASY mods to get more out of it. This board offers a lot for the money and once setup properly it performs better than the K8T800Pro and on par with the NF4 chipsets. This board has a lot of potential. Great over clocker and very stable so far. Installing the board and having it up and running was a breeze. I only have one problem with the board and it's mainly pointed to ASrock. See cons for that one.

Cons: If you plan to use an AGP card with this board please read because I can save you a lot of trouble. The board that shipped to me came with BIOS version 1.5 There is a feature in the BIOS that needs to be enabled BUT IT ISN"T INCLUDED IN THE VERION THAT CAME WITH THE BOARD. YOU MUST FLASH THE BIOS TO VERSION 1.6 OR NEWER TO GET THE OPTION IN THE BIOS. Once flashed enter the BIOS and go: -> Advanced -> Chipset Configuration -> AGP P2P Deep Fifo (enable this feature - AGP P2P Deep Fifo: Enabled) without this enabled your AGP card will not allow windows to install drivers and work correctly. If your board comes with 1.6 or higher you have nothing to worry about. It blows my mind that a board releases to the public and it can't function without flashing the BIOS. Thats my only Complaint. Once in windows 1st install ULI integrated drivers, reboot, then install video card drivers, reboot and install DX9C. That last one is a must or you will suffer poor performance.

Overall Review: I hope that my input above will help others that are going through what I went through to get AGP working perfectly on this board. It's an easy fix that ASrock should be promoting on their web page for those of you that are unlucky enough to buy a board with BIOS 1.5 installed. other than this problem the board is wonderful. It now works perfectly and its very fast! I only ranked it a 4 because of the BIOS issue. It would have received a 5 if I didn't have to learn on my own how to fix this problem that should never have released to the public in the first place. Good Luck!!

Pros: 2 Weeks later- I have played my FPS games with all the filters, have done some video encoding in MPEG 2 and 4 and this board has operated flawlessly!I have been building computers for myself and others for 10 years now and have upgraded from my K6 200Mhz,2 K6-2's,Duron, Several Athlons and Athlon XP's, and now my first K8.This has been the easiest.

Cons: Have had the bussing sound happen once. Minor driver conflict.

Overall Review: I have read most of the poor reviews here and it seems to me that many of them just don't know what they are doing! Do your homework! The majority of problems with any new build are with drivers; installed or uninstalled incorrectly, wrong versions or conflicts with other drivers. True every brand has it's lemons, but to RMA the board 3 times( as noted by one review), you have got other issues. Rule of thumb - always install chipset drivers first, and video card drivers should always be LAST! They are the most intrusive and are revised the most often. And disable any thing you are not using (onboard sound,lan,ports,raid,etc) this frees up resorces and reduces posible driver conflicts. I don't think I have any parts that are not common in system builds so it all comes down to your knowledge of all the hardware you are puting in the build. Mine- 4200 X2, ASRock MB, AIW X800XT AGP,1 Maxtor SATA 2 300GB, 2 Maxtor ATA133 160GB Roswell 550 PSU,2GB G.Skill DDR400, 2 Emperex DVD burners.

Pros: Was able to keep my investment in good RAM (Ballistix PC3200) and video card (6800GT) and make the move to A64 easily. After moving into this motherboard, it's stable and quite speedy.

Cons: As stated in many reviews, the IDE placemnet puts them directly blelow the AGP video card. It takes some creative cable management to overcome the placement.

Overall Review: Although not a "supierior" enthusiast board, the BIOS has a lot of nice tweakable settings (not where you would expect some of them tho). It's not a 5 star because of the IDE connectors and the non-intuitive BIOS, but worth the money spent if you have an investment in AGP Video and want to move to s939

Cons: This is not a board for beginners. Do your research before tackling the installation of this board. I had to go through a lot of troubleshooting with this board, but now it couldn't be running any more smoothly. You will likely have to set the RAM to run at DDR400 speeds in the BIOS, as it runs at DDR333 by default. There is no visual indication in the form of LED lights to indicate that the motherboard is receiving power, and because my case does not have a case speaker to connect to the MB, there were no beeps, making the troubleshooting more difficult.

Overall Review: Use the ULi Unified driver for the AGP and LAN, not the ASRock drivers. Make sure both the 20-pin power connector and 4-pin power connector are connected. If installing your OS onto a SATAII hard drive, you have to create a floppy disk with the drivers on an existing computer. If your case has a speaker, connect it to the motherboard. To connect the case cable for the Power LED to the motherboard, I had to switch one of the cables to the middle pin hole 2 since the connector coming from the case had the wires at pin holes 1 and 3.

Pros: Great board with limited but doable overclocking.

Overall Review: remember to download the updated driver for the Ali chip here: http://www.uli.com.tw/eng/support/drivers.php * version 2.1 I had an issue with video card and now it works great! it'll save you lots of time reading forums.

Overall Review: This board is pretty good. It worked the first time I hooked it up with my A64 3800+ Venice. It automatically detected my two sticks of RAM and put them in dual-channel mode. It recognized everything that I put in on hte first try. The only minor problems was that it detected my RAM as DDR333, but you can easily change it back to DDR400.The board layout, however, is somewhat annoying. The bottom is way too crowded. All of the headers (chassis connectors, USB headers, CMOS header etc.) are at the bottom. The SATA and IDE connectors are directly above them. Because I have 2 IDE devices and 3 SATA drives, the cables really get in the way. It’s very difficult to get to the headers to change anything, like flash the CMOS if need be. I have to unplug some of my drives to get to it. But, if you plug in the headers before you put in your hard drives, you should be set. Also, the IDE connectors are a little too low on the board. My IDE cable didn’t reach my optical drives, and I had to buy a lo

Pros: The price on this motherboard is great, but don't let that fool you; it's a quality product. The Bios is really easy to set up and offers some easy overclocking abilities. Being able to have both an AGP and PCI-Express slot is great- it's what let me stick with my Radeon9600Pro so I could make it to my 7800GT.

Cons: The IDE placement is odd, and there aren't any bells and whistles such as firewire or Gigabit ethernet. Otherwise, a fantastic board for the price.

Overall Review: I've had mine for over two months now and it's been solid as a rock. Definitely reccomended for the budget gamer or someone who wants to get a head start on their gaming rig without putting up too much money up front. Bottom line- It's a good enough product to warrant the full five eggs. Also, shipping with FedEx was fast and awesome.